I got to Titusville a bit before noon and stopped at McDonald’s for lunch. When I got to Merritt Island, I pulled off on a dirt road that ran along a levy between impoundments and parked to eat.

Before the car stopped, I saw a Reddish Egret. I knew immediately what it was. It was colored similarly to a Little Blue Heron, but was larger and stockier, with more of a contrast between the neck and body. Its body was slate gray. The neck and head were rusty red. The thick bill was pink with a black tip. 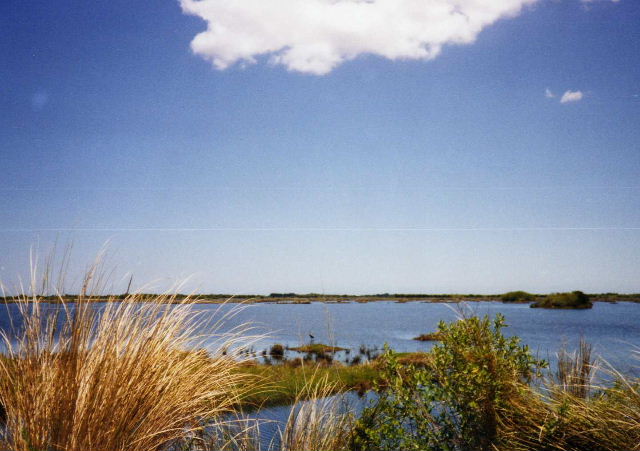 It was wading in about six inches of water at the edge of a patch of grass about 15 yards from where I was parked. It was acting a bit nervous, stalking about and watching me. I ate my hamburger and watched. It soon settled down and began lumbering about with jerky movements. It made several short, sudden runs and also walked about tilted way over to one side, as if it was about to fall over sideways.

As I watched, six Black Skimmers coursed across the surface of the impoundment nearby and landed up a ways. I finished my lunch and went looking for more excitement.