We haven’t been putting out thistle seed for the past couple years because it’s been expensive to buy and money has been tight. When our local bird seed store went out of business in December, we discovered seed is cheaper at Farm & Fleet, so we bought some again.

The goldfinches discovered it right away and have been testing our resolve to continue offering it. But this week our investment paid off. I was home sick on Tuesday and noticed two Common Redpolls on the feeder. We were both at work on Wednesday, but on Thursday, when my wife was home, I encouraged her to watch out for them. She saw many, including one that she noticed right off was much lighter in color than the others. When I got home from work, I got a couple good looks at the flock and also noticed the lighter one. I saw enough to make me spend much of the evening researching the differences between Common and Hoary Redpolls.

Hoary Redpolls have been one of my nemesis birds. I’ve chased down reports of them on several occasions. I once spent about four hours standing on a sidewalk in a residential neighborhood in Evanston looking down the narrow space between two houses at several thistle feeders covered with redpolls but never saw the Hoary that supposedly had been seen in the area. Other trips to forest preserves and the Chicago Botanical Gardens have also been fruitless. Could there possibly be one in my own yard?

The consensus on the Internet is that they’re probably under-reported because people are so cautious about separating them from Commons. But I did my research and had my camera and binoculars standing by on Friday.

Every half hour or 45 minutes, the redpoll flock would show up — sometimes three or four birds, sometimes as many as 20 — for about 10 minutes. Then they’d flit off suddenly and disappear for a while.

Off and on during the morning, I saw a bird that I thought might be the pale one I was looking for, but the light was bad and I was never sure. I gave up for a while, but when the afternoon sun got into the best position for lighting our feeders, I looked again.

There was one female that was definitely lighter, with a much less-streaked, paler neck and back, thinner and fewer streaks on her flanks, just a few marks on her undertail coverts, and a pale rump. Her bill also looked stubbier.

The birds kept chasing each other off the prime spots on the feeder, so it was hard to keep track of one given bird, but there were a couple times when the light female was positioned where I could see her well. I took a ton of photos and checked all the field marks as carefully as I could.

What finally convinced me was the one time the pale bird flew down to the ground. Other redpolls had been feeding on fallen seed all day whenever the flock was in the yard, but I’d never seen the pale one down there. She only stayed for a split second this time, but it was long enough to see the marked contrast in the color of her back.

After looking carefully at my pictures and comparing them with my field guides and photos and guides on the Internet, and, for good measure, having my wife sort through all the evidence with me, I am convinced I had a female Hoary Redpoll on my feeders.

The Hoary is on the left. You can see how much more fine the streaks on her flanks are compared to the Common on the right. There are also fewer and finer marks on the undertail coverts. 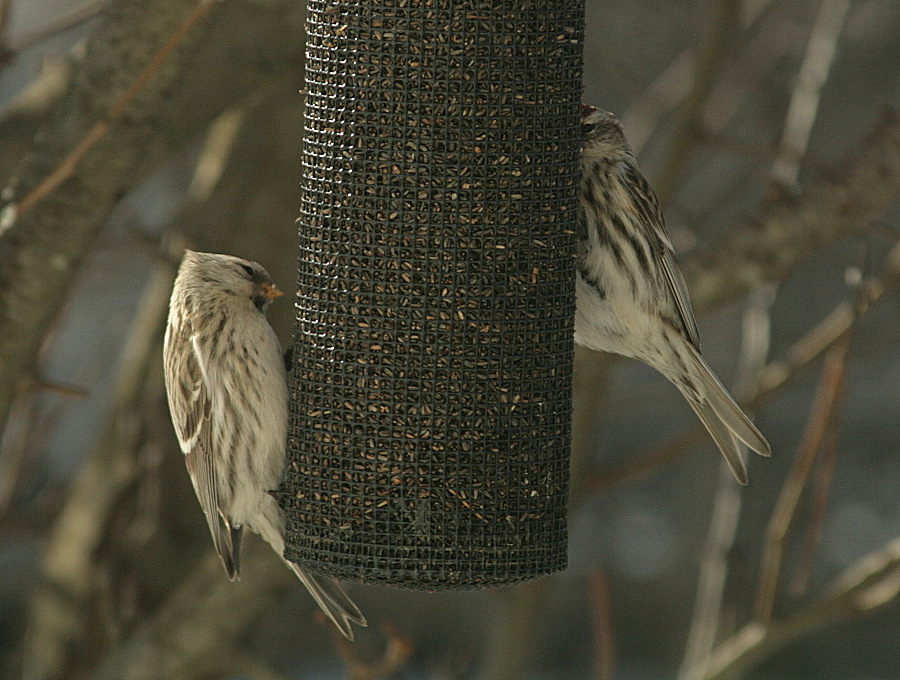 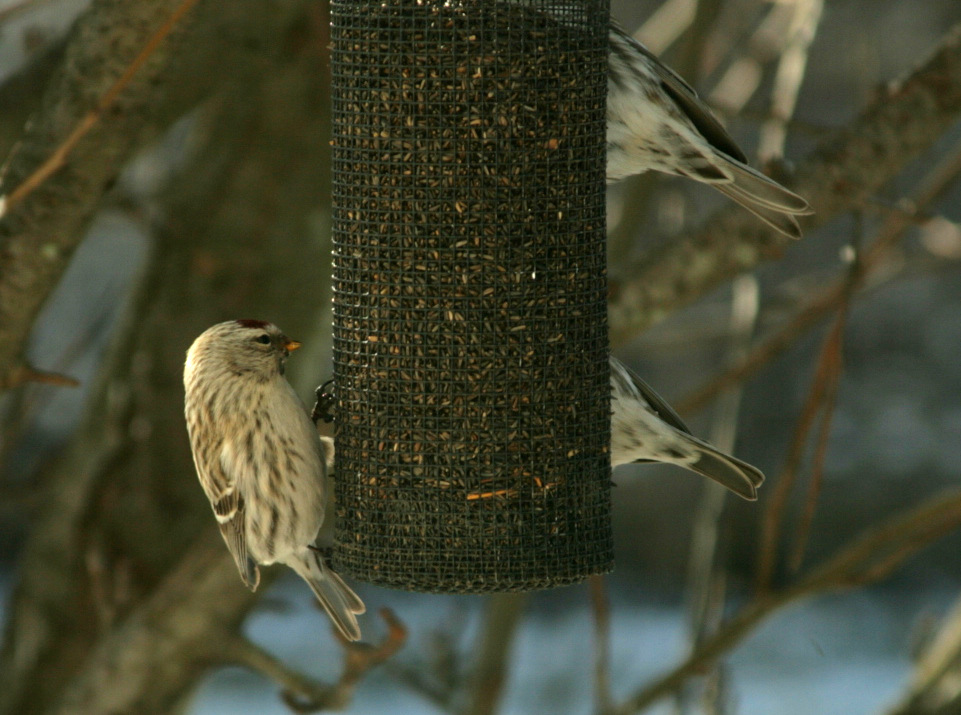 In this shot, you can see how much paler she is on the back and hind-neck. 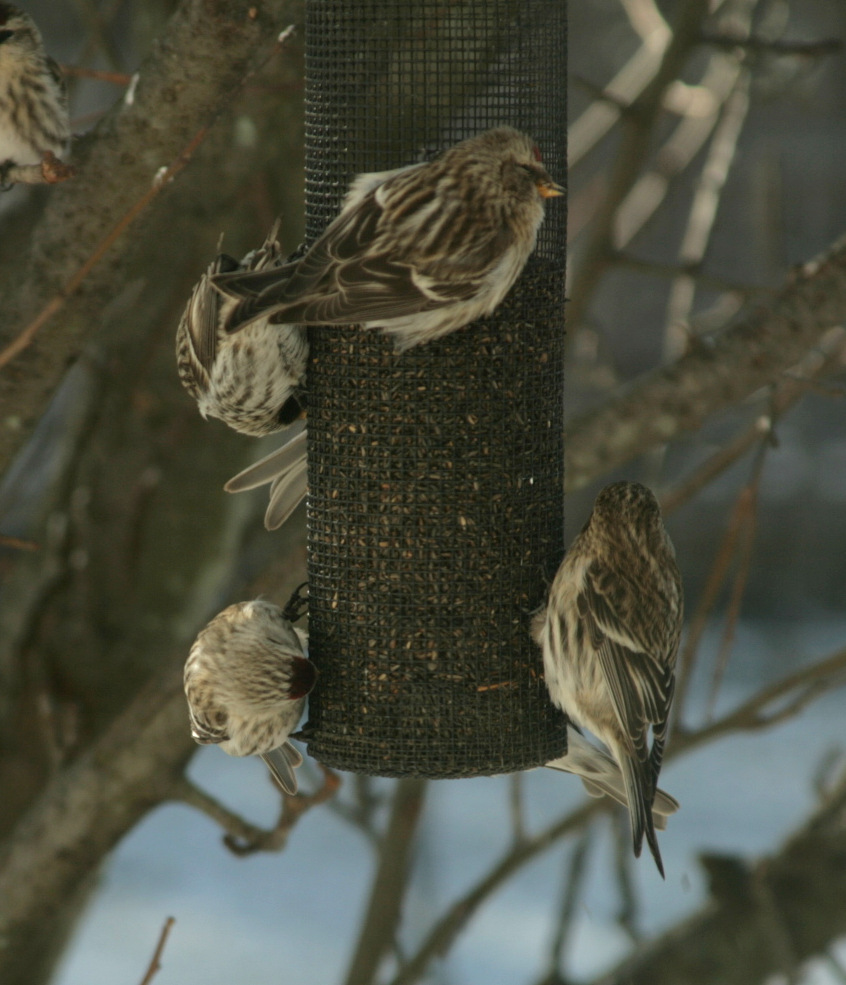 In this next photo, that’s a male on the upper right with the pink chest. You can also get a good look at the streaks on the rump of the top bird to compare with the rump of the Hoary in a photo further down. 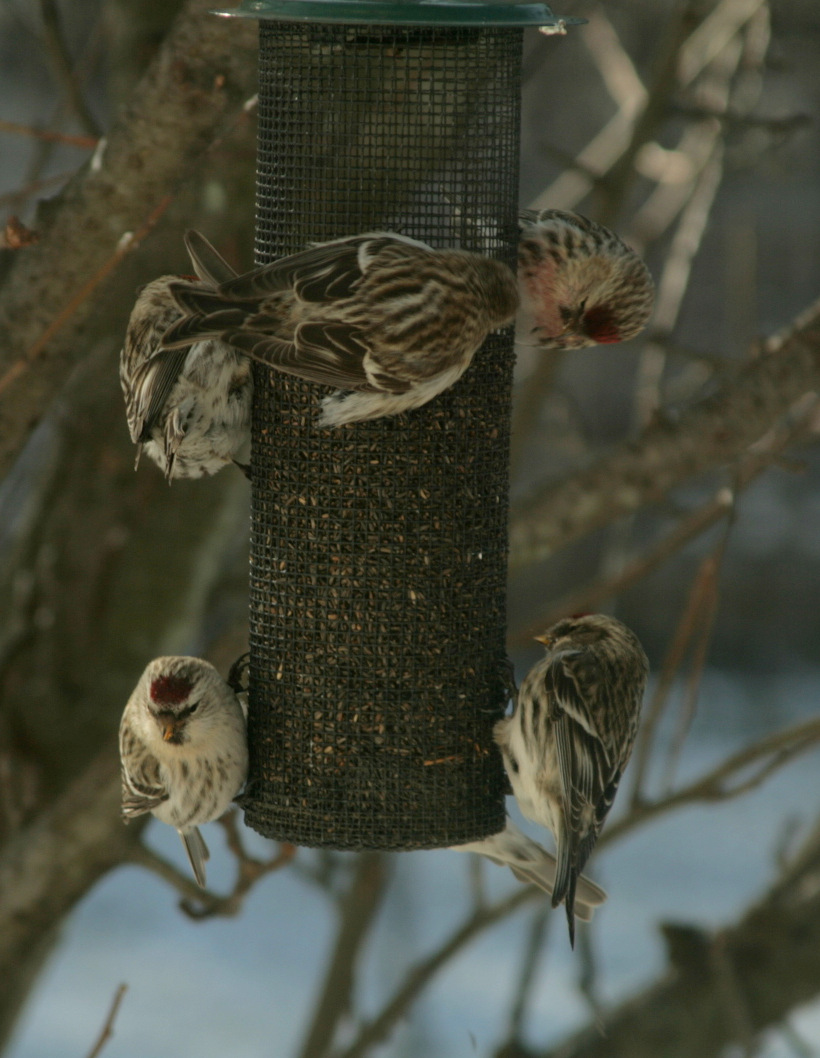 A good comparison of side and undertail streaks — and of how pale the Hoary is on the back. 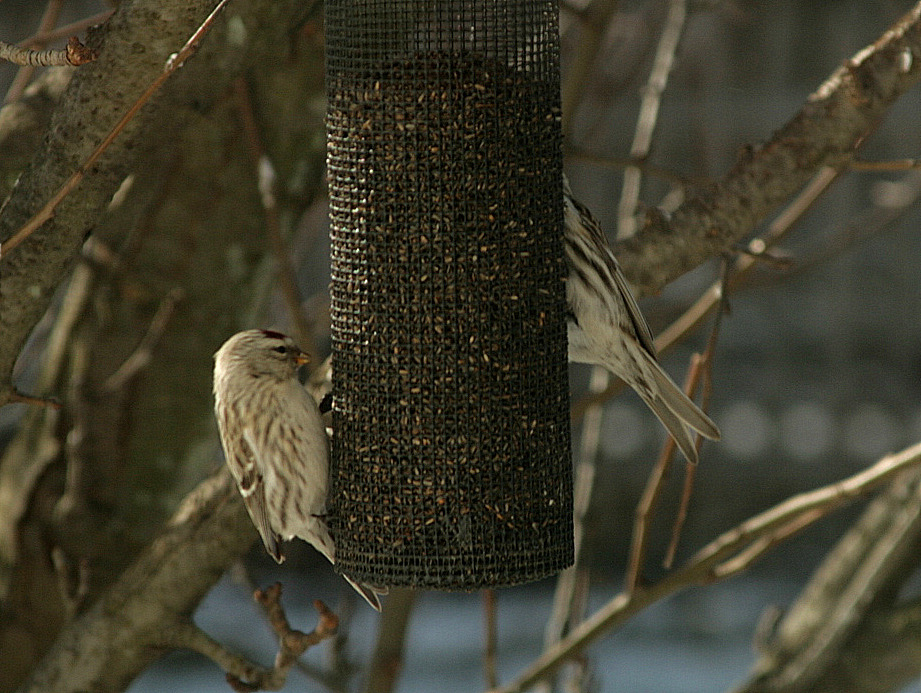 In this next photo, she’s feeding on the back side of the feeder, giving a good shot of the undertail area to compare with the Common right above her. 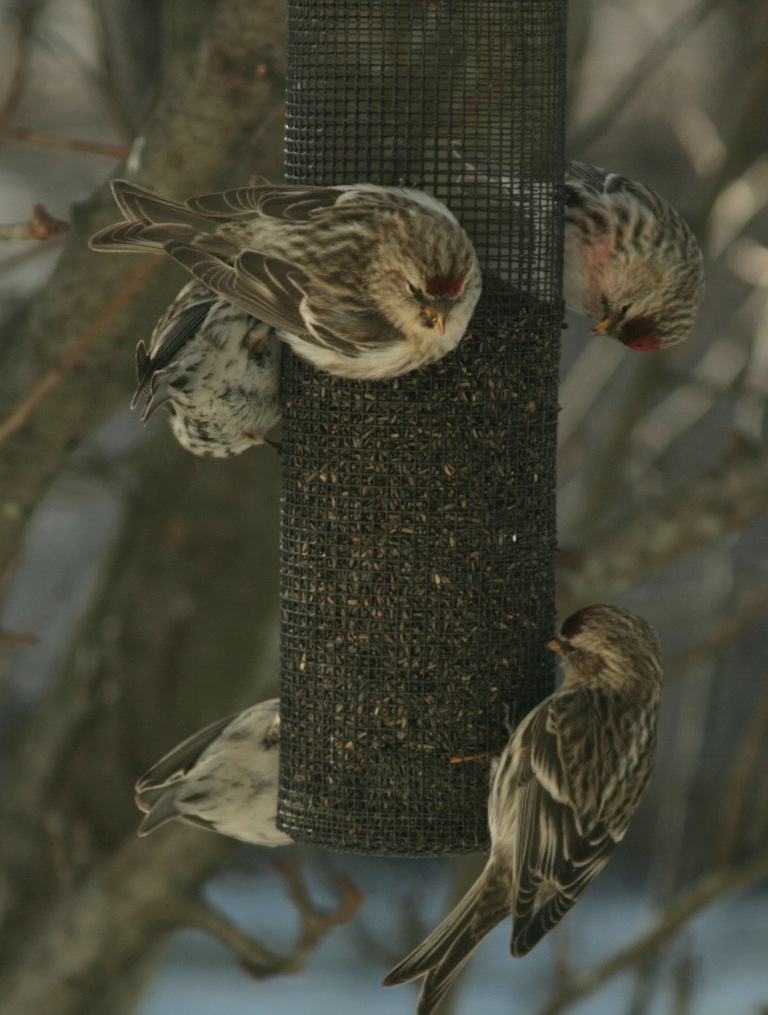 A back shot to compare with the backs of the Common Redpolls in earlier photos. 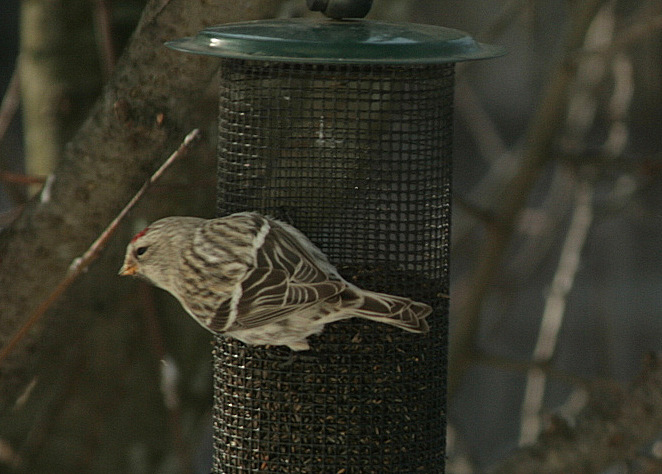 A side view, showing how light her flank streaks are. That’s a male House Finch below her. 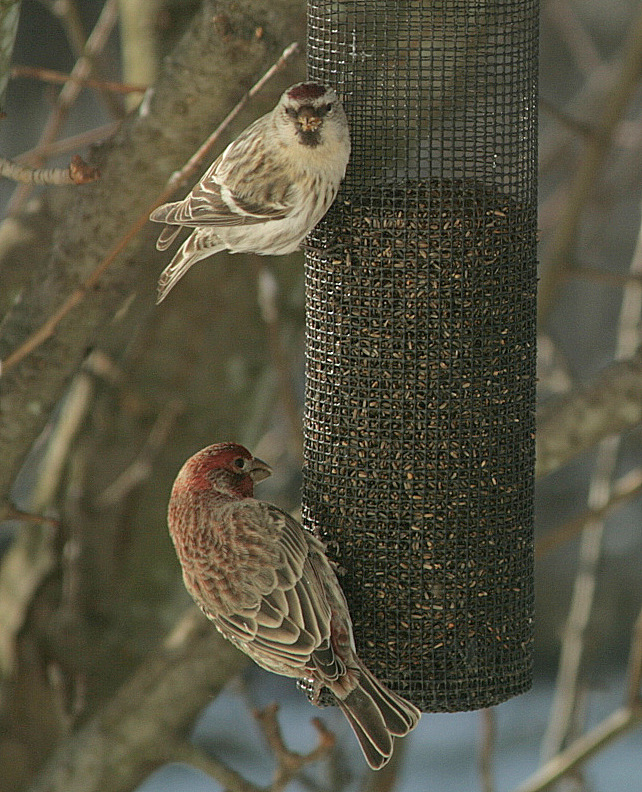 One of the few times I was able to follow her after she flew off the feeder. I saw her white, lightly-streaked rump a couple times, but this was the only time I was able to photograph it. In many of these photos, she also seems to have a shorter bill than the Commons. 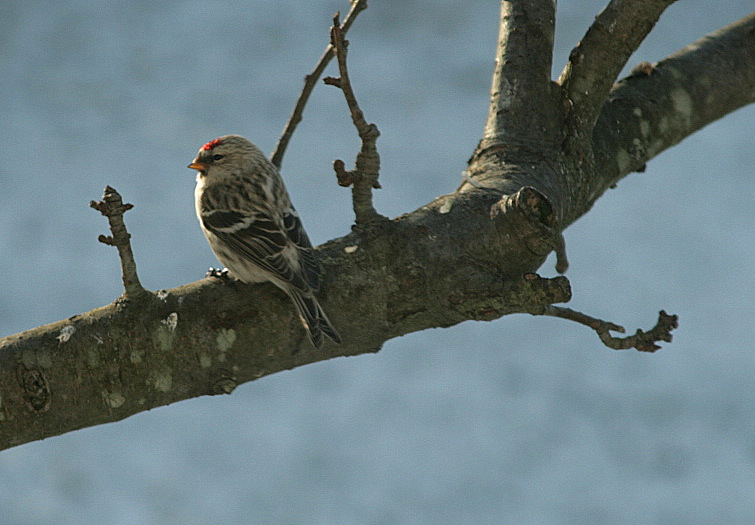 It’s been a very long time since I got a lifer out the window of my own home — more than 32 years, in fact. The thistle seed was well worth the price.

The redpoll flock comes and goes in various numbers, and the Hoary Redpoll isn’t always there. One morning, about a week after I took the photos above, the feeder was empty and the entire flock was on the ground foraging for scraps. The Hoary was right in the middle and was immediately noticeable. I took a quick, crummy photo with my iPhone, but it’s good enough to show the difference. The Hoary Redpoll is just below the clump of snow. There’s a female House Sparrow right below it, but all the other birds in the photo are Common Redpolls. 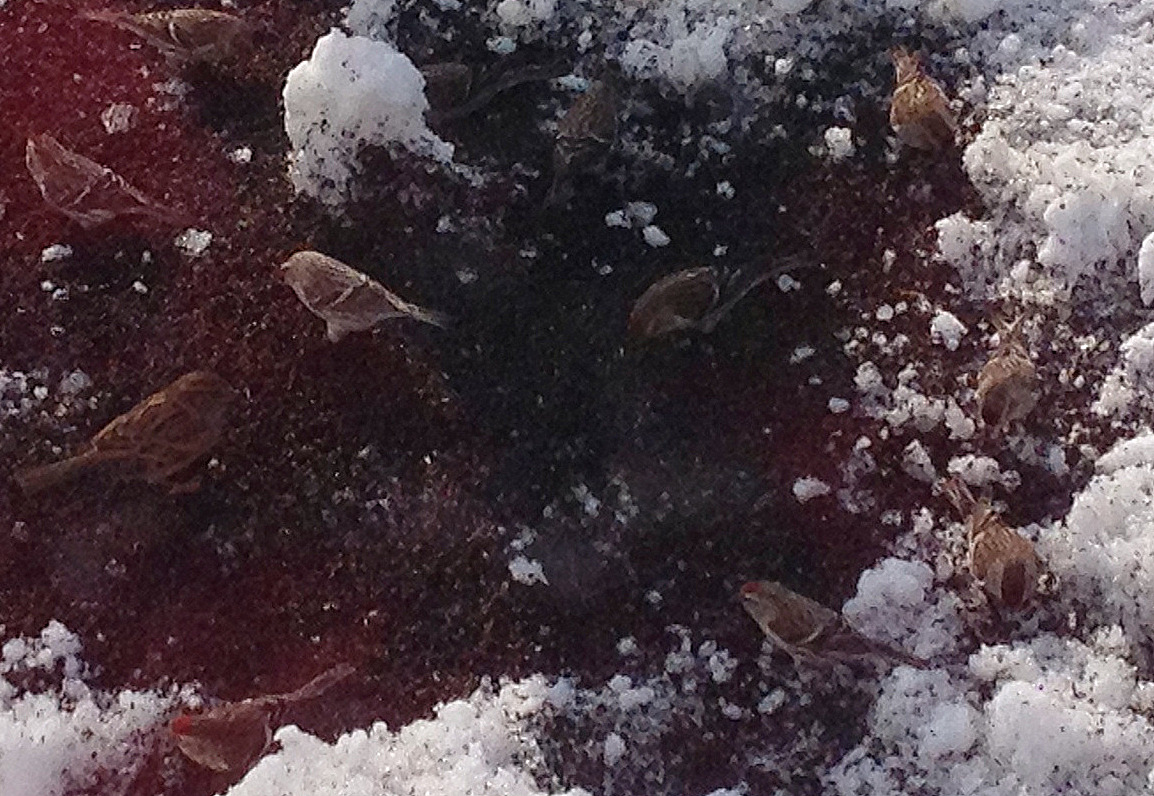