The Gunnison Sage-Grouse has only been considered a separate species since 2000. Pretty much as soon as it was distinguished from the Greater Sage-Grouse, it was put on the endangered list. There are an estimated 5,000 birds in seven populations in central Colorado and extreme eastern Utah.

There are only two ways to see a Gunnison Sage-Grouse. Drive around randomly in remote areas of central Colorado and hope to spot one that happens to be crossing the road—or go to a lek where they do their courtship dances in April and early May. But since the bird is so rare, the leks are protected.  There is only one lek that is viewable by the the public, and even it may not remain open much longer. I decided to go see the bird while I could.

I took two days off work. On Wednesday, I birded my way west through Cañon City and Bighorn Sheep Canyon and stayed overnight in Gunnison. On the way on Wednesday afternoon, I stopped by the small parking area near the lek to see what it looked like and to make sure I could find it in the dark the next morning. 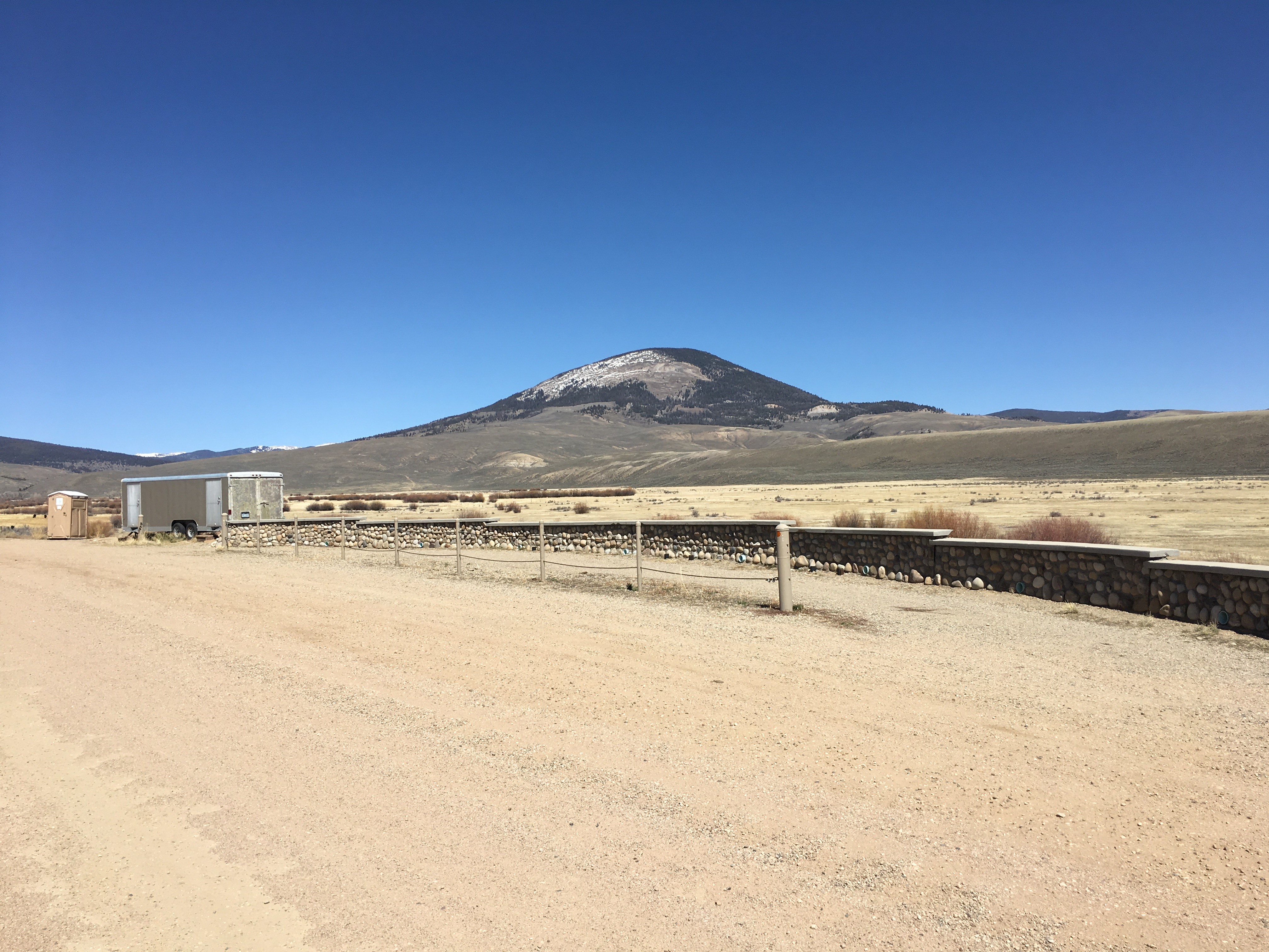 On Thursday, I woke up at 3:45 and drove 20 miles in the dark to the spot. This was fairly brave of me because I was headed to the middle of nowhere with two warning lights lit up on my dashboard. It wouldn’t have been a good place to break down. I was the first one at the site—it was 4:38, but within five minutes, two more vehicles parked behind me. A while later, a group came in a van and filed into a trailer next to my car. The trailer can be rented for $100 and would be much more comfortable than sitting sideways in a car.

A college girl pulled up and walked to each of the vehicles. She gave us instructions and had us fill out a survey. The questions were mostly about where we’d stayed and how much money we’d spent in the area—obviously gathering info to show the locals that birders help the local economy.

I sat in my car and watched the morning break. It was in the mid-20’s before dawn. When I first arrived, the night was pitch black except for about a million stars. Slowly the nearby hills were silhouetted, then the vegetation faded into view. I was there for almost two hours before I saw my first grouse.

It was down on the flats about halfway to the ridge. It stood so still that, in the dim light, I wasn’t sure if it was really a bird. I scanned the area with my scope, then looked back. The bird was still there, still motionless, but about two feet to the right of where it had been. Seconds later, it took off and flew out of sight to the north. So I had my lifer, but it wasn’t a very satisfying look.

A few minutes later, I saw a grouse on top of the ridge about half a mile away. I could only see it through my scope—it was too far away to pick out with the naked eye. The first one was soon joined by another. One of them walked down the slope a short way. Both were males, and both were doing their courtship dance. This consists of ruffling up the chest feathers, throwing the head back, and forcing air into the pouches on the chest. These two pouches look much like sunny-side-up eggs—yellow against a white background. Apparently female sage-grouse go for this. Here’s a photo I stole off the Internet that will explain what I’m talking about and help make sense of the video below. 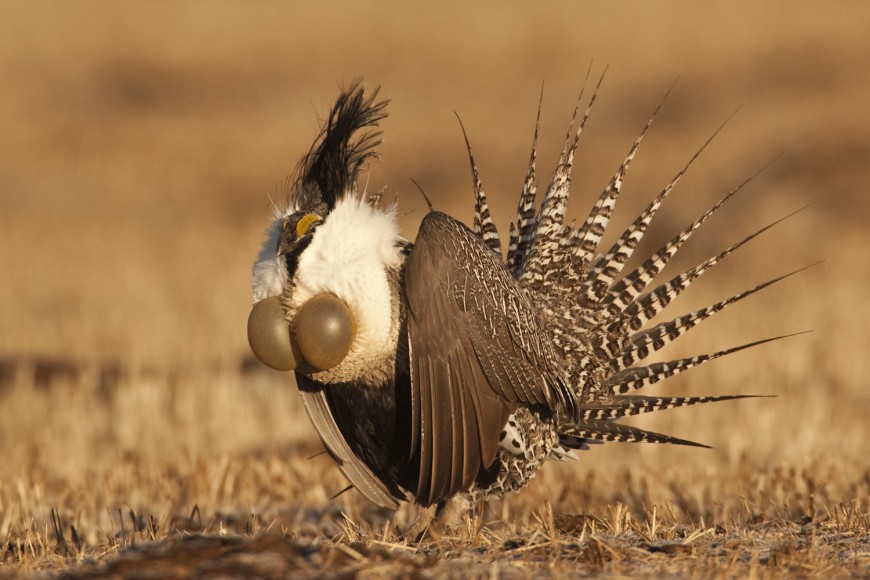 For the next hour, I watched as best as I could. I saw some grouse walk up the ridge to the lek and others dancing at the crest. The most birds I counted at any one moment was eight, but I think there were a lot more. The males were easier to spot, of course, with the sun lighting up their spread tales and neck feathers. Later, I saw eight fly off to the north and there were still at least four on the ridge, so I’m saying I saw 12 of them. The actual number was probably closer to 20.

As the sun rose higher, it backlit the birds but also made it very difficult to watch them without going blind. It got to the point when the only way for me to view them was to hold my phone up to my scope and watch the screen while ducking out of the glare.

When the eight birds flew off to the north at about 7:30, the group in the trailer filed out and the girl in the Jeep motioned the rest of us to leave, even though there were still grouse on the ridge. Apart from having to get up ridiculously early, there wasn’t much challenge to adding this lifer. It wasn’t a great view, but it’s the only way to see a Gunnison Sage-Grouse, and one does what one must.

Here’s a mash-up of the video I took. 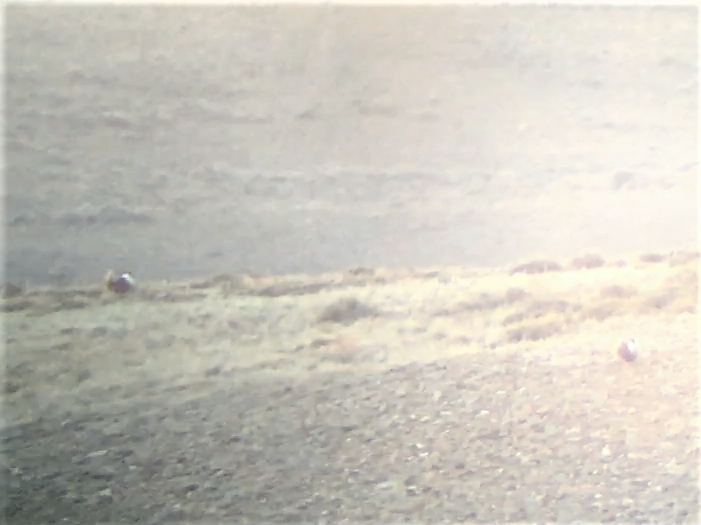