I had four hours to kill in Columbus, Ohio, so I decided to go to the zoo. 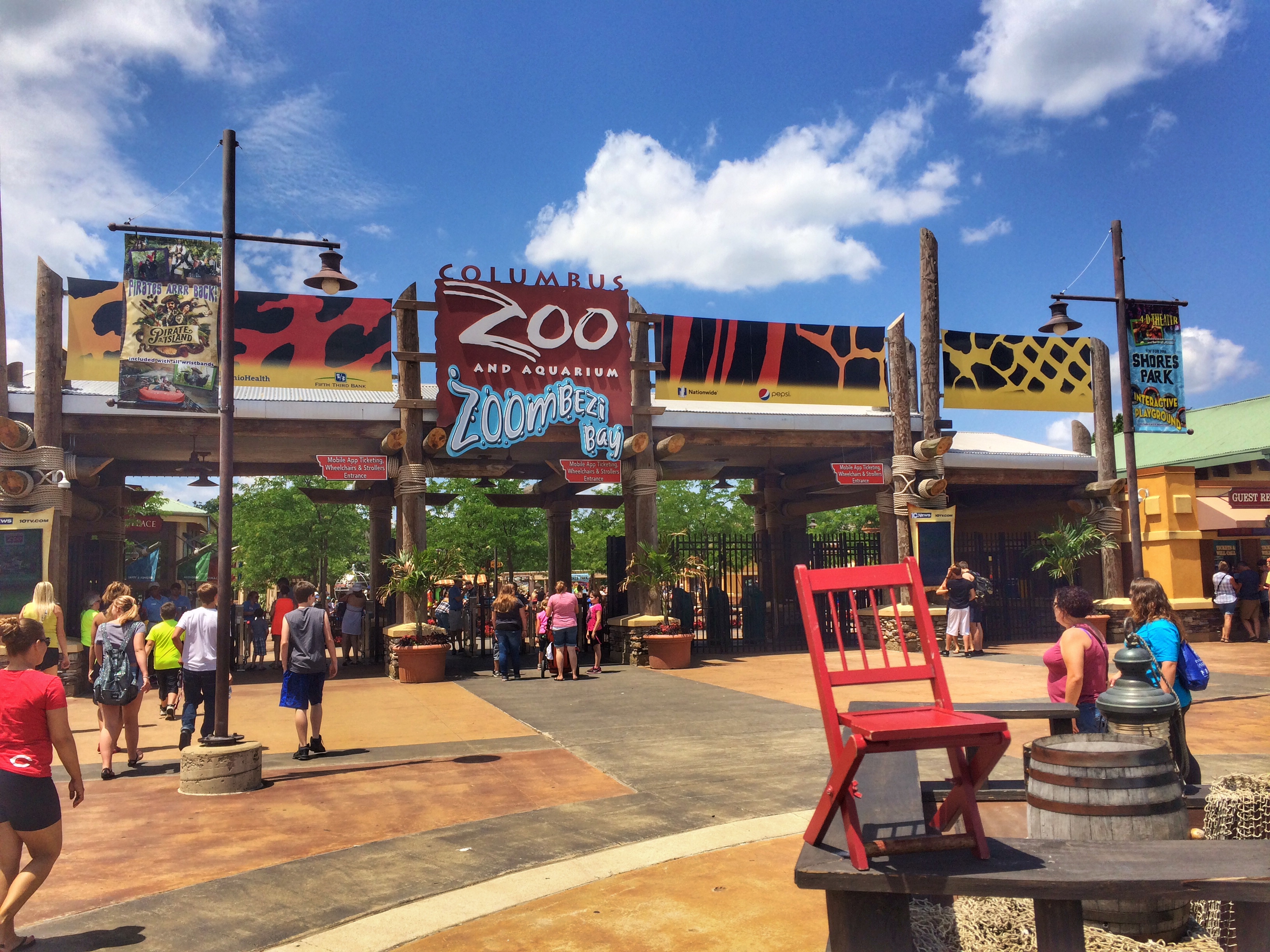 The park was filled with moms with kids, young couples, and kids on field trips. I felt a little lonely in the crowd.

The zoo covers a lot of land and is visually impressive. I walked a long way before I realized I wasn’t seeing many animals. There were rides and fountains and food stands and face-painting booths and statues of animals, but the animals themselves were hard to find. Instead of a lot of different species, they have large displays for the more popular animals. I strolled through fairly quickly — I got in almost six miles — and looked for red chair photo ops and places where there were no crowds. 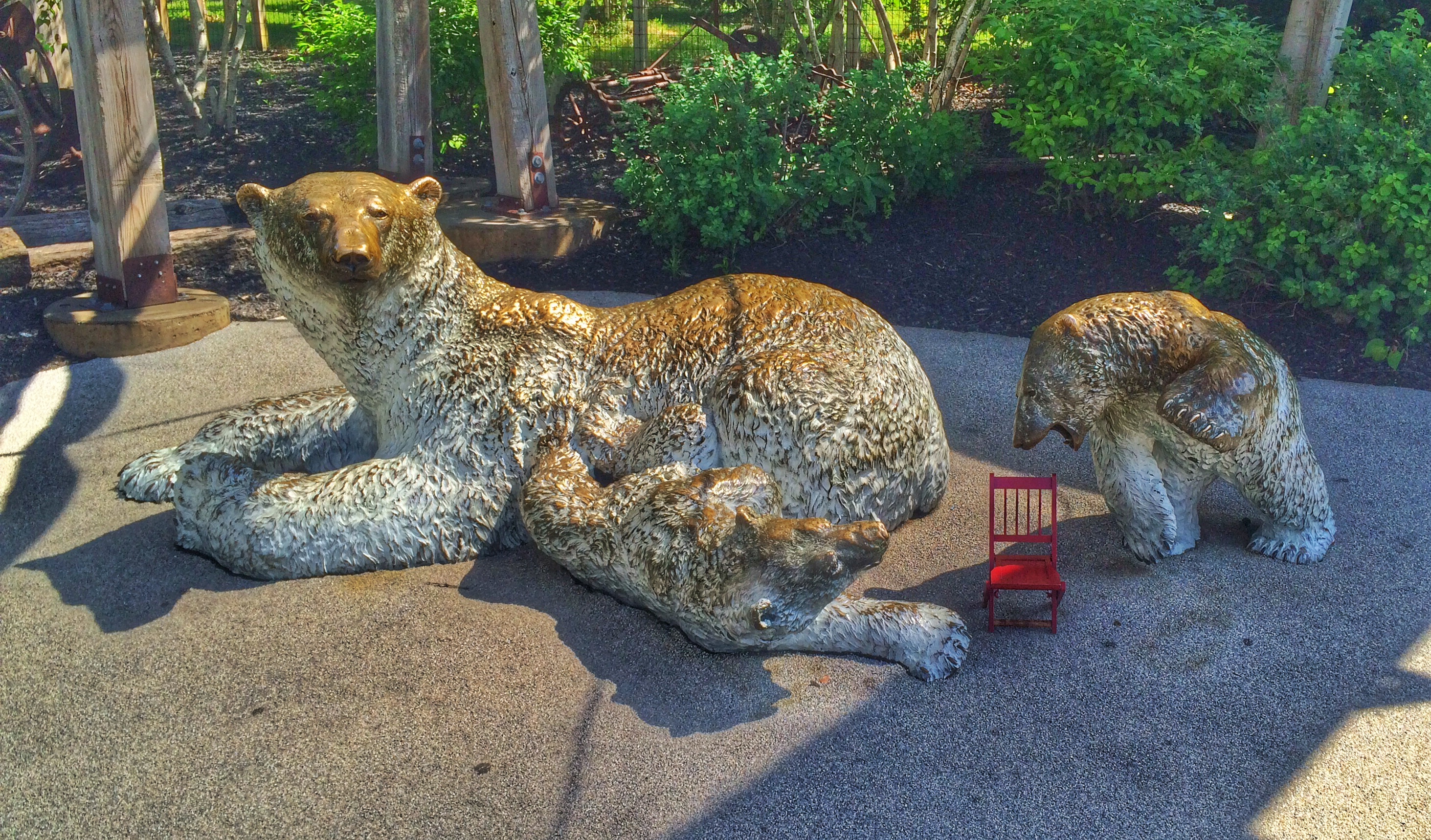 There were trout in the water in the polar bear enclosure. This guy was paddling about and caught one of them. Below the tank, there was a place where you could stand and look up at the bears, but by the time I got down there, all three of the bears were out of the water. 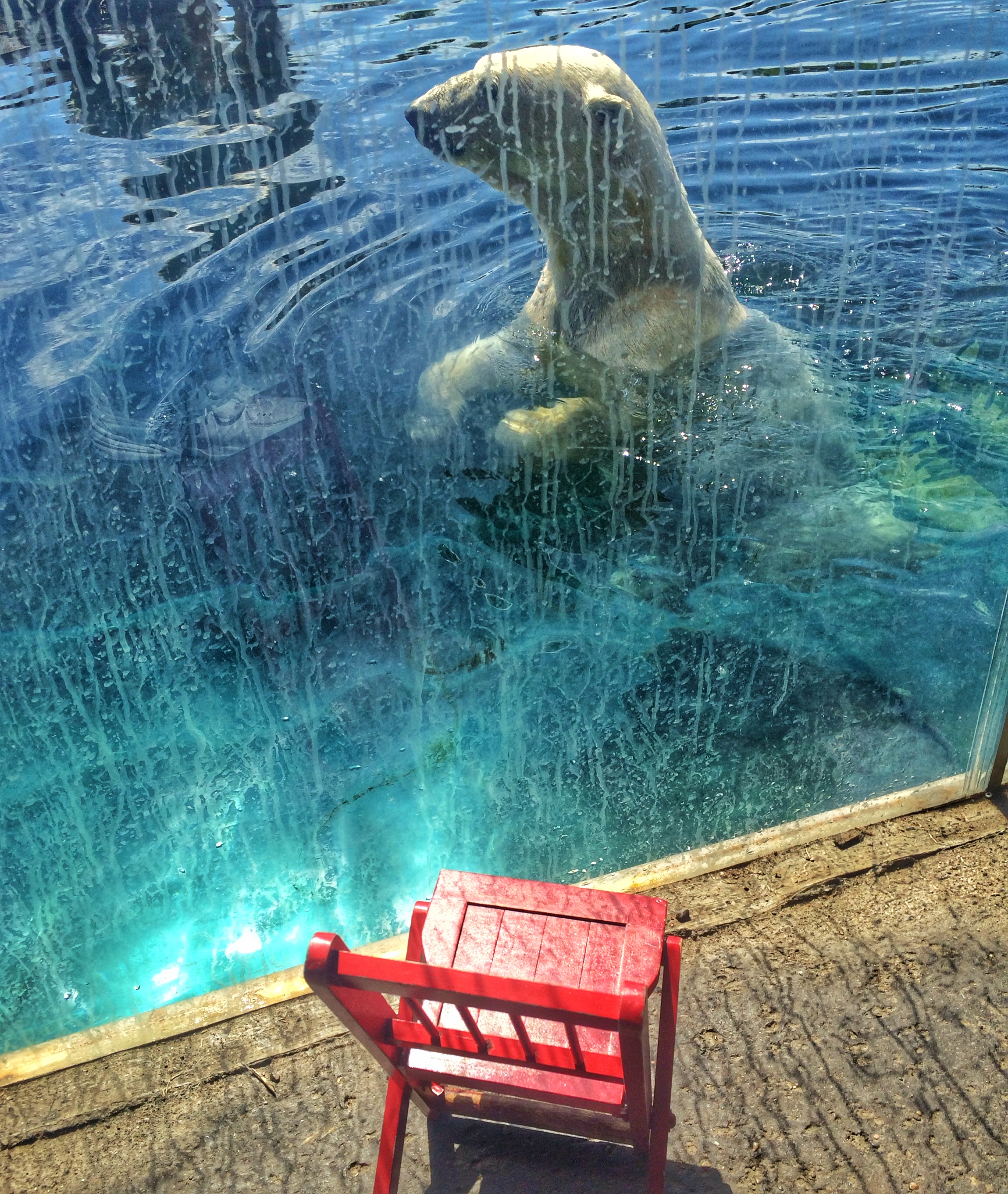 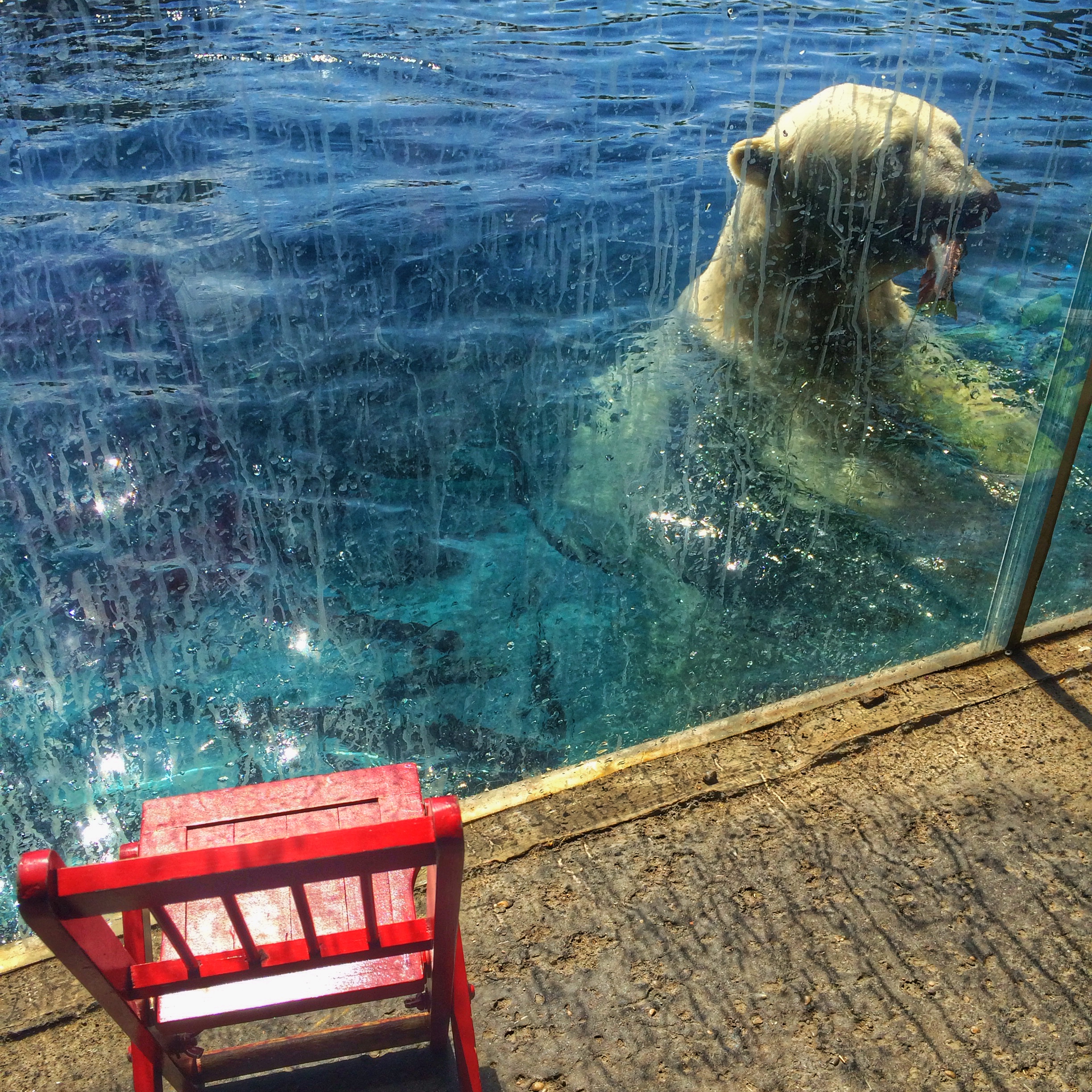 Advertisements for the zoo feature “sniff ports” where visitors and bears can smell each other. I saw the port in the polar and brown bear enclosures, but no bears were interested. 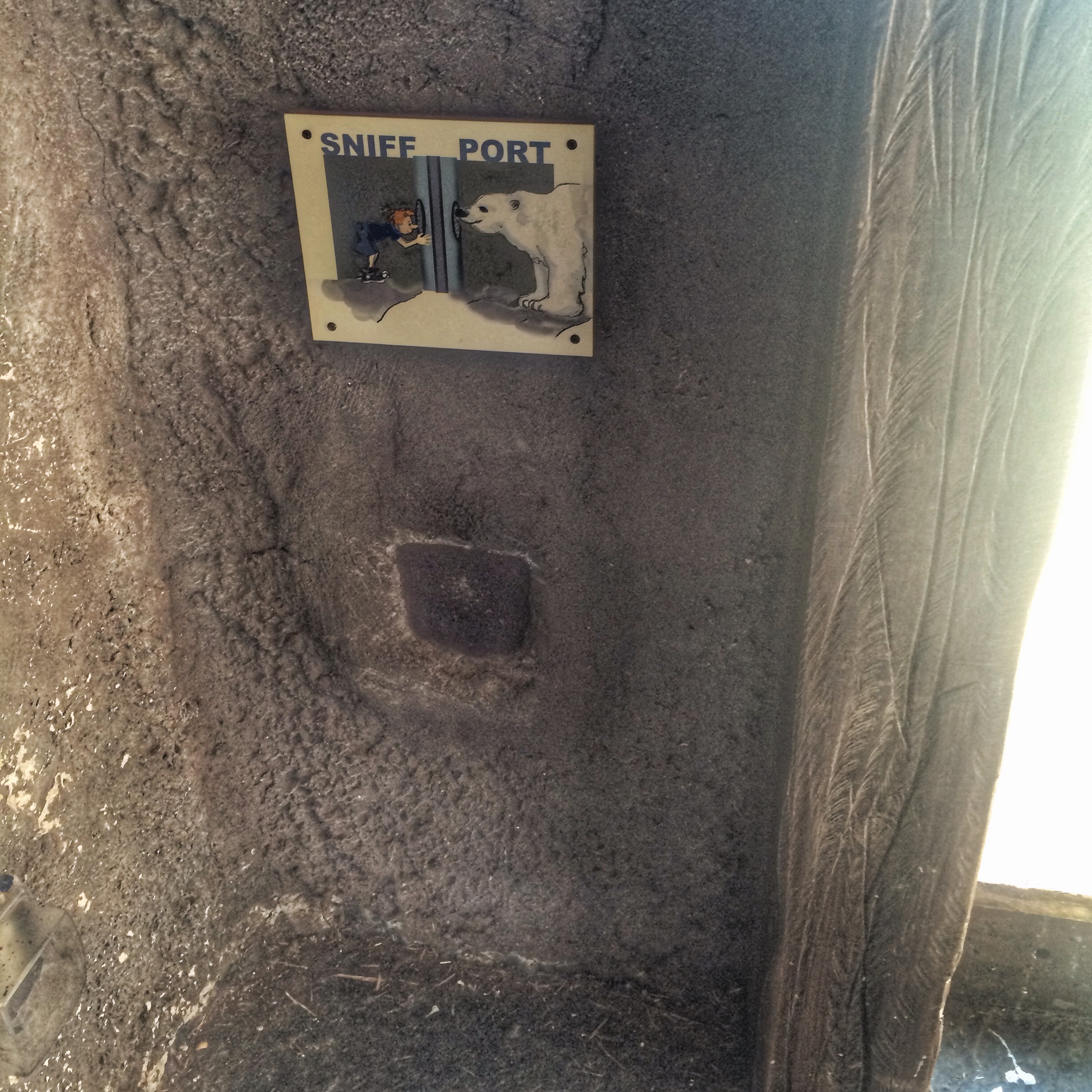 The brown bears were close to the glass, but so was a huge group of kids in matching T-shirts. I managed to squeeze in and get this photo. The bear wasn’t really looking at the chair — I just timed it right. 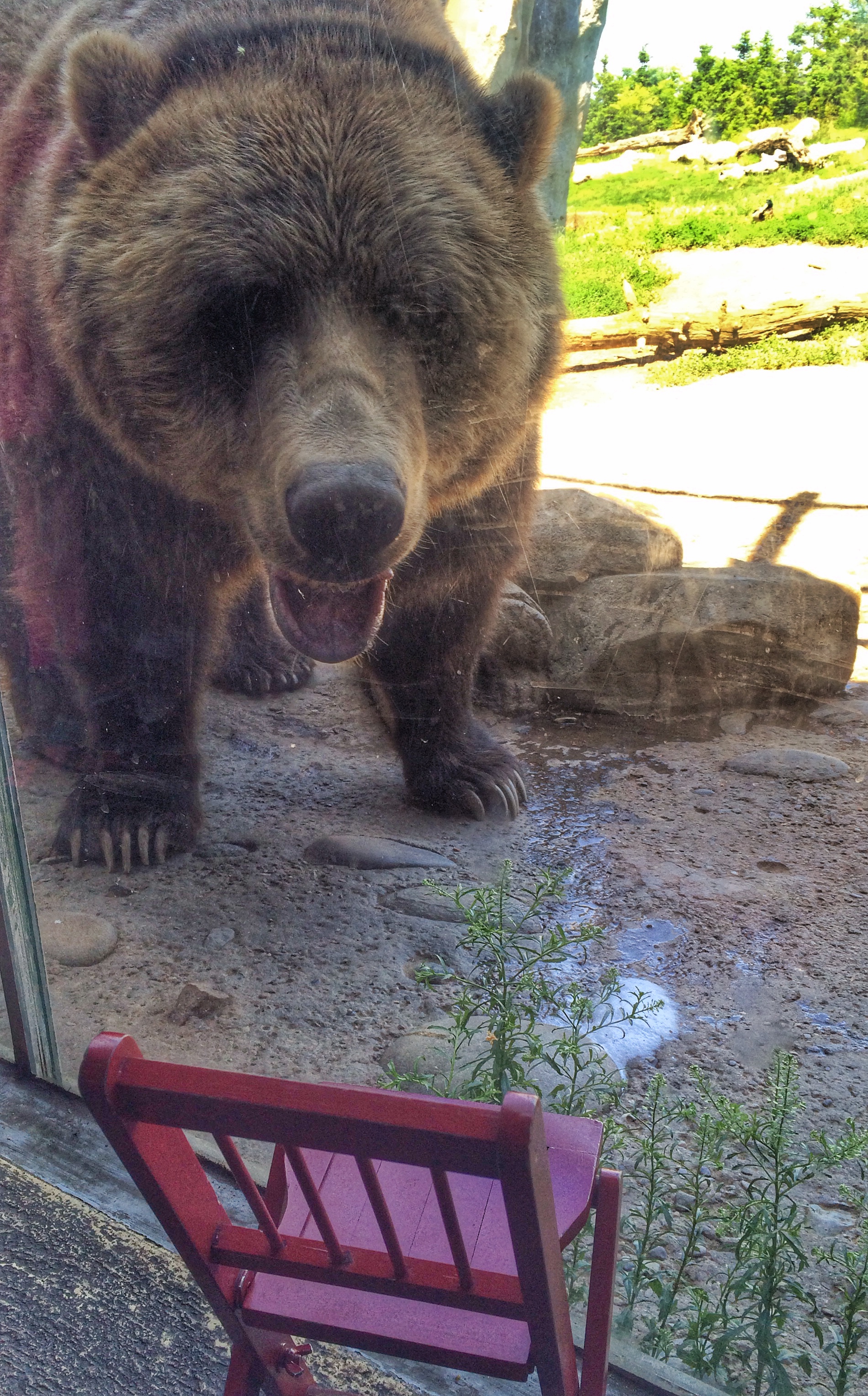 Shortly thereafter, the bears walked the length of their enclosure to a cave (which also had a window). I snapped this photo, but then the crowd followed and I didn’t bother sticking around.

The Africa area was mostly just a huge enclosure where zebras and antelope and giraffes were mixed together. It looked impressive, but the animals were a long way away. I could have gotten closer if I’d paid a couple bucks to feed a giraffe, but the line was long so I didn’t.

Here’s one of those stretches — this one in the Africa area — where there was “design” stuff relating to the theme but no animals. There were bicycles all over “Africa.” I guess I’m supposed to believe that the natives ride, or at least park, bicycles everywhere they go. 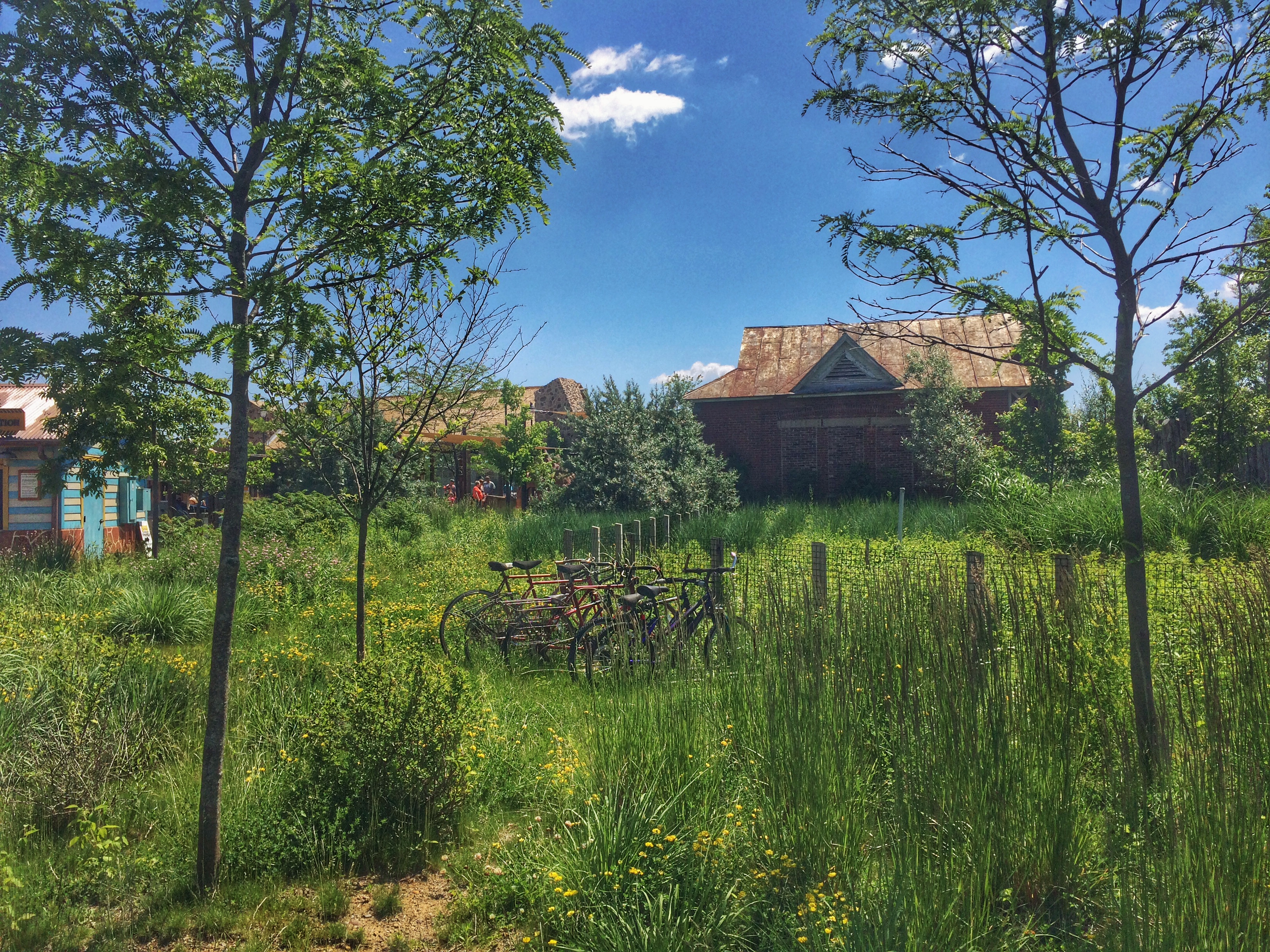 It was hot by this time — in the low 80s. Most of the animals were sleeping in shady corners or somewhere out of sight. I didn’t bother taking photos of sleeping moose, pronghorns, wolverines, etc. because they looked like the piles of fur you see in every zoo. The wolverine enclosure was impressive, however. You walk in this cabin and find a bed and dresser and other furnishings. The back  is a wall of glass, and that’s where the wolverine is. 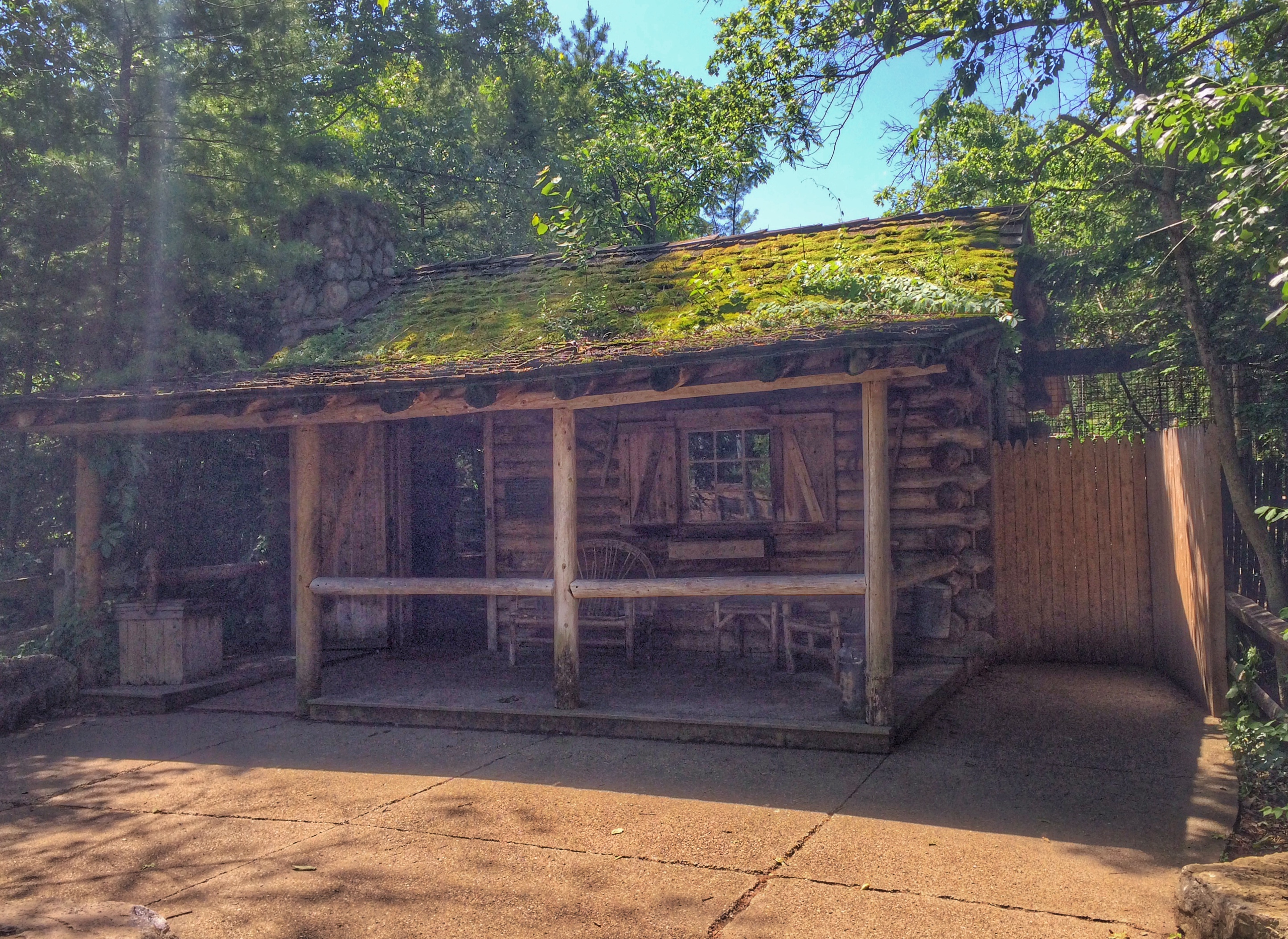 There were three or four aviaries. I hoped for some red chair photos but they were packed with teens in zoo T-shirts who wandered over and stood next to anyone who stopped to look. In one of them, colorful parrots flew down and landed on visitors’ hands to sip nectar out of a cup. The cups cost $2, so I didn’t bother them and the parrots didn’t bother with me. I was watched very suspiciously and didn’t even attempt to get one to land on the chair.

In the Congo area they had a boat ride called Zoombeezie Bay with poorly-done animatronic pirates, making the zoo feel very much like a Disney-wannabe. 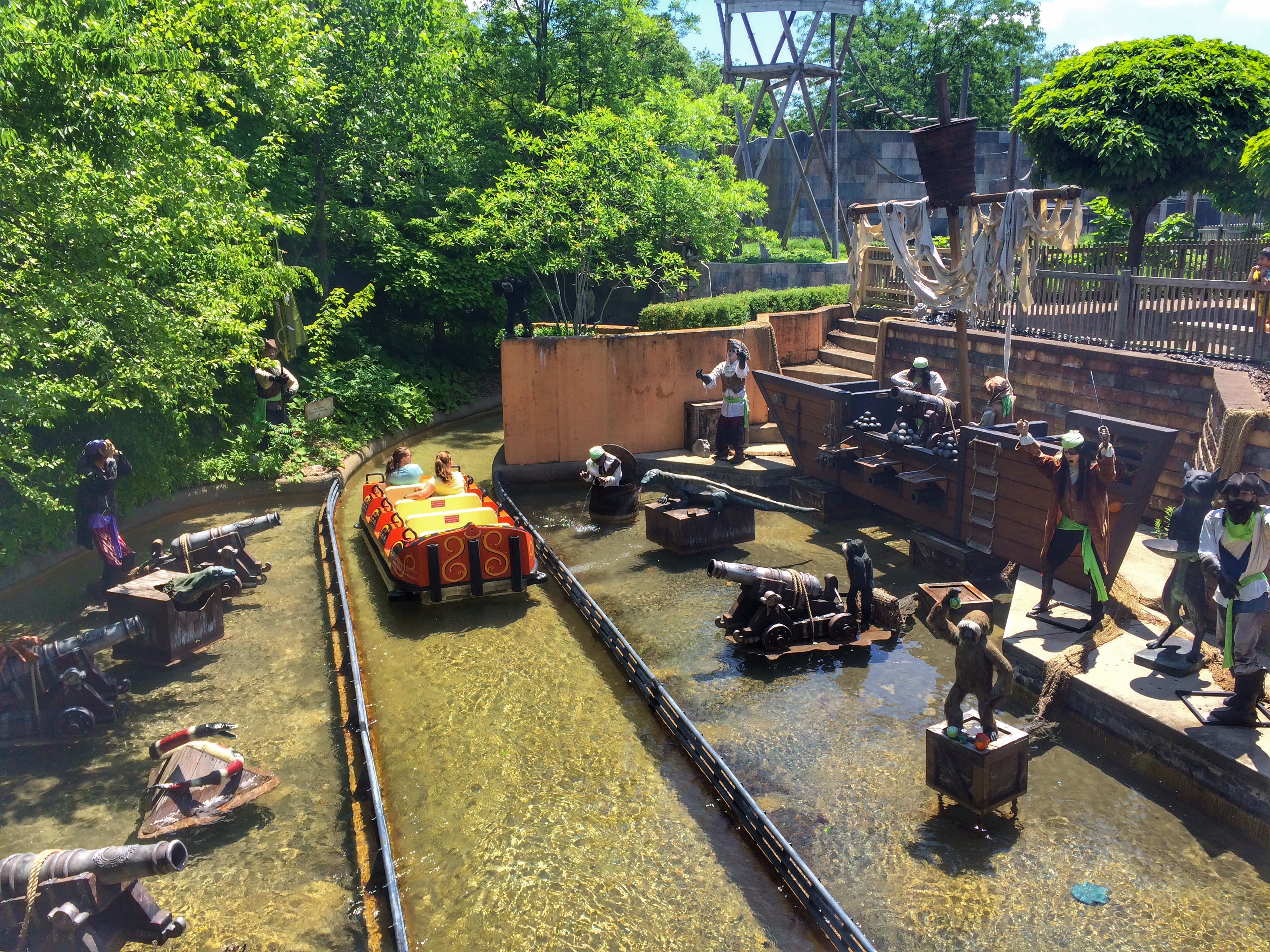 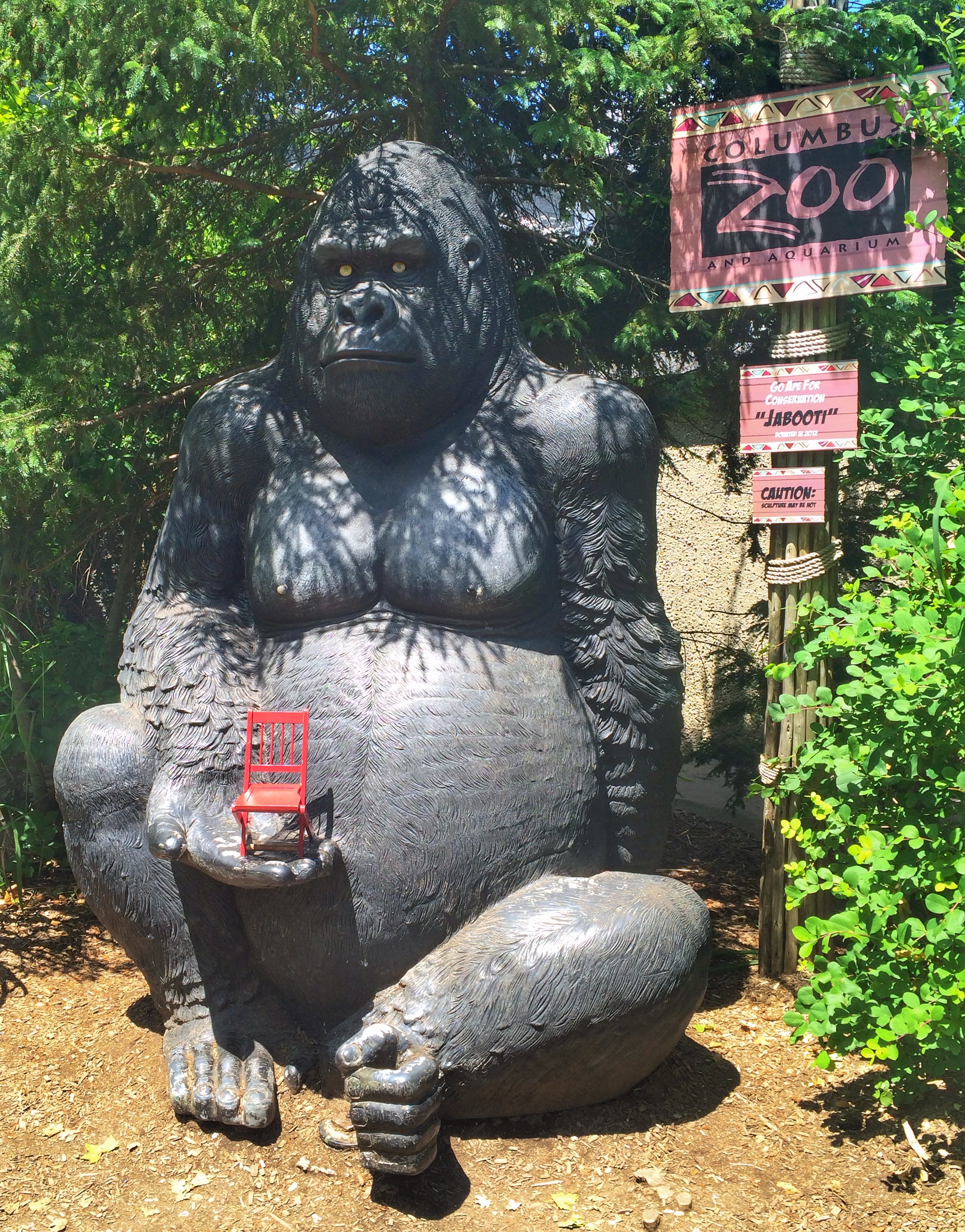 Both these gorillas were looking at the chair, but they weren’t impressed. 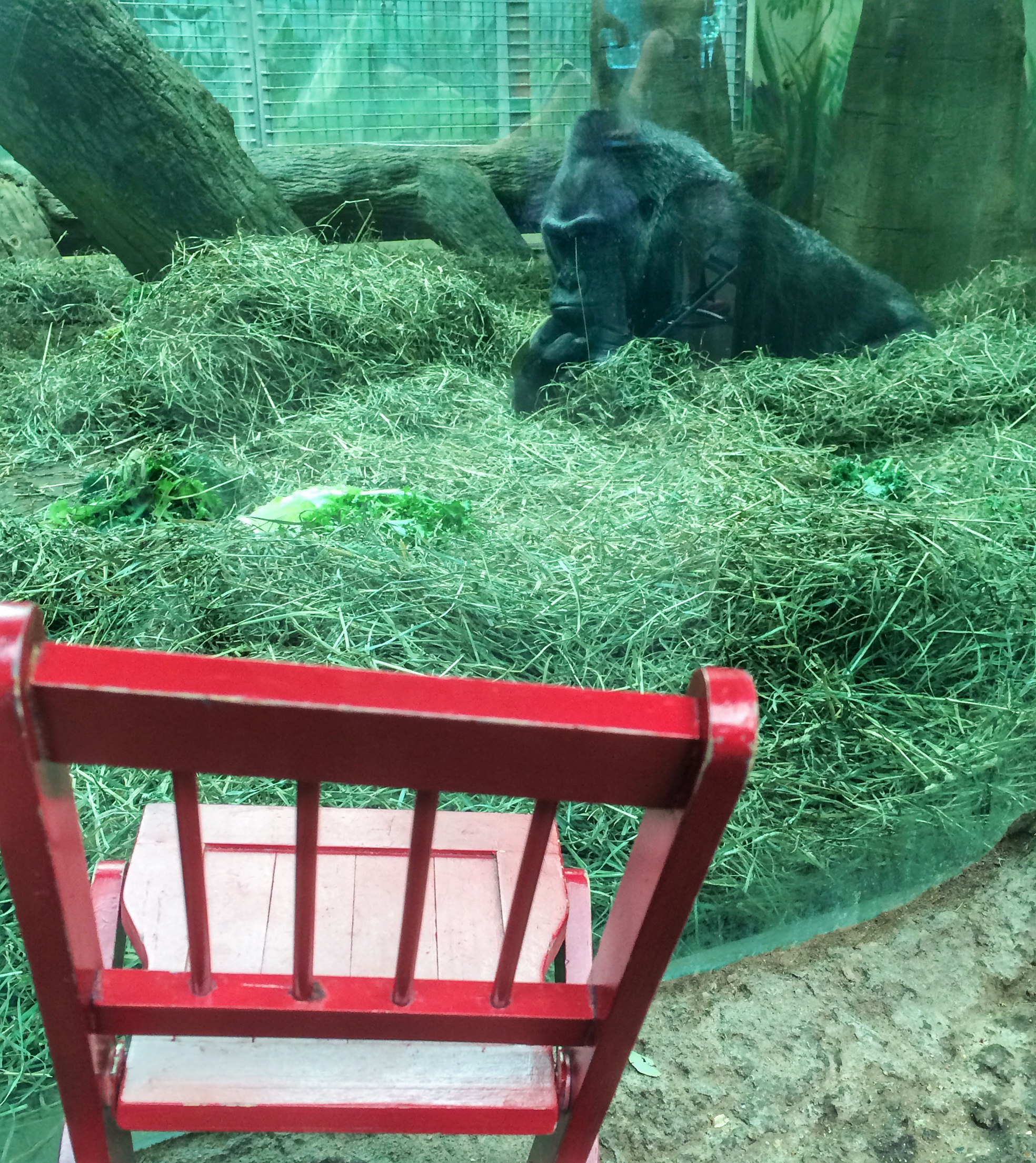 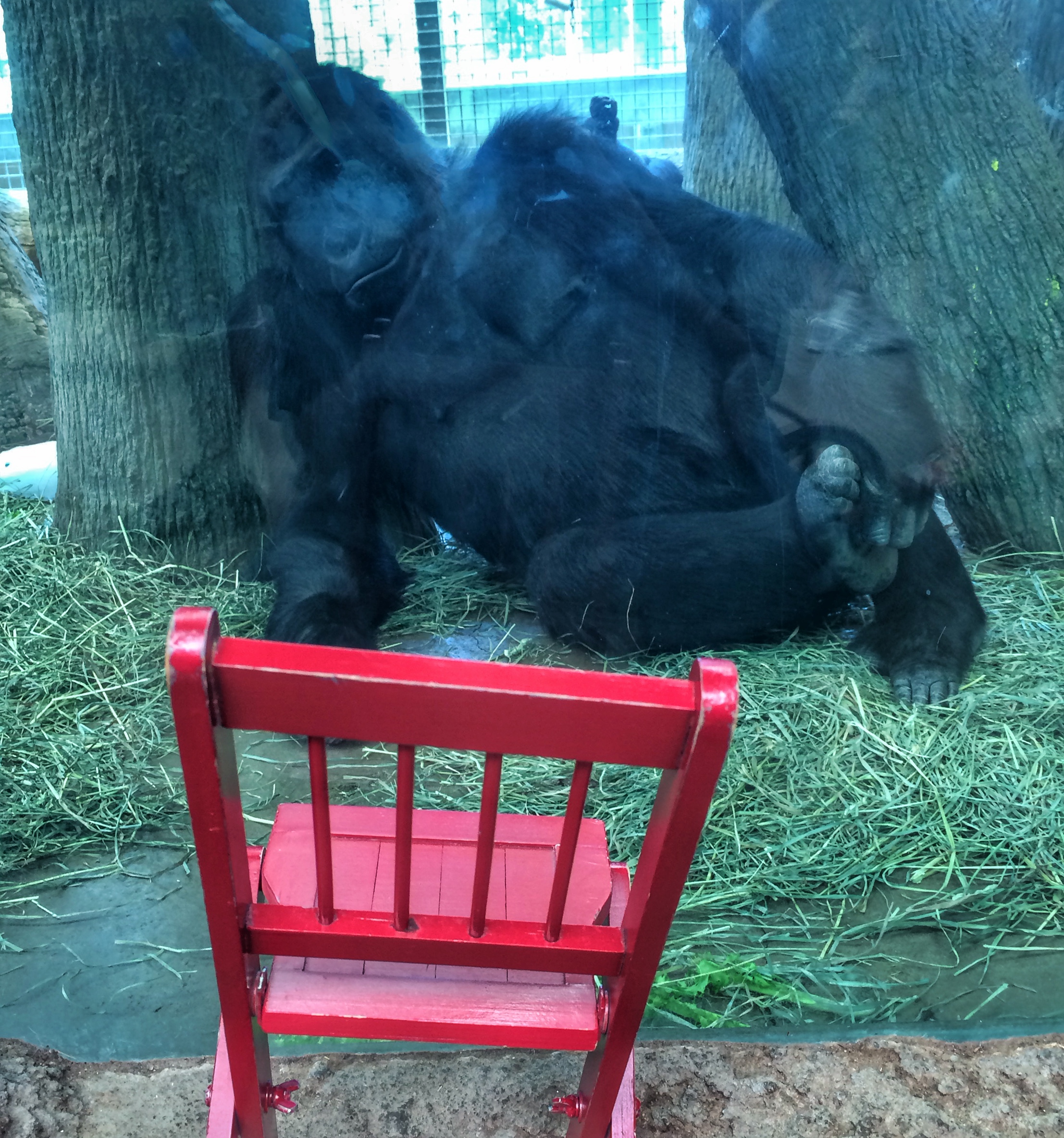 There were kangaroos and flamingos and penguins and all, but I mostly walked by without stopping. I did ask one young woman in the reptile house if I could get a photo of the chair with the corn snake she was holding. 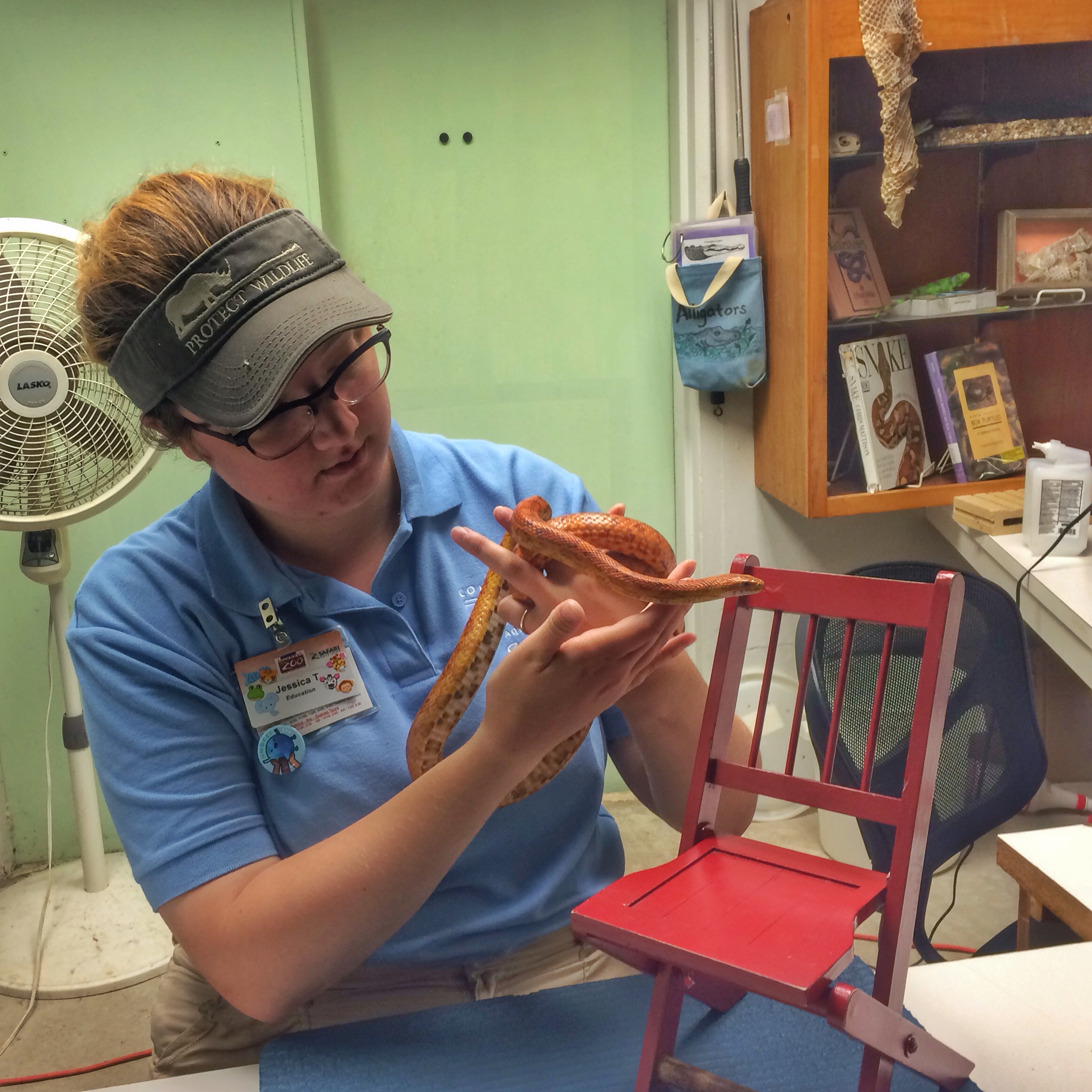 In short, it was a pleasant, but expensive, variation on my daily five-mile walk.

This entry was posted in Museums, Red Chair, Sculptures and Statues. Bookmark the permalink.