We stayed overnight in the Detroit area and headed downtown on Sunday afternoon for a baseball game. We parked about three blocks from the stadium 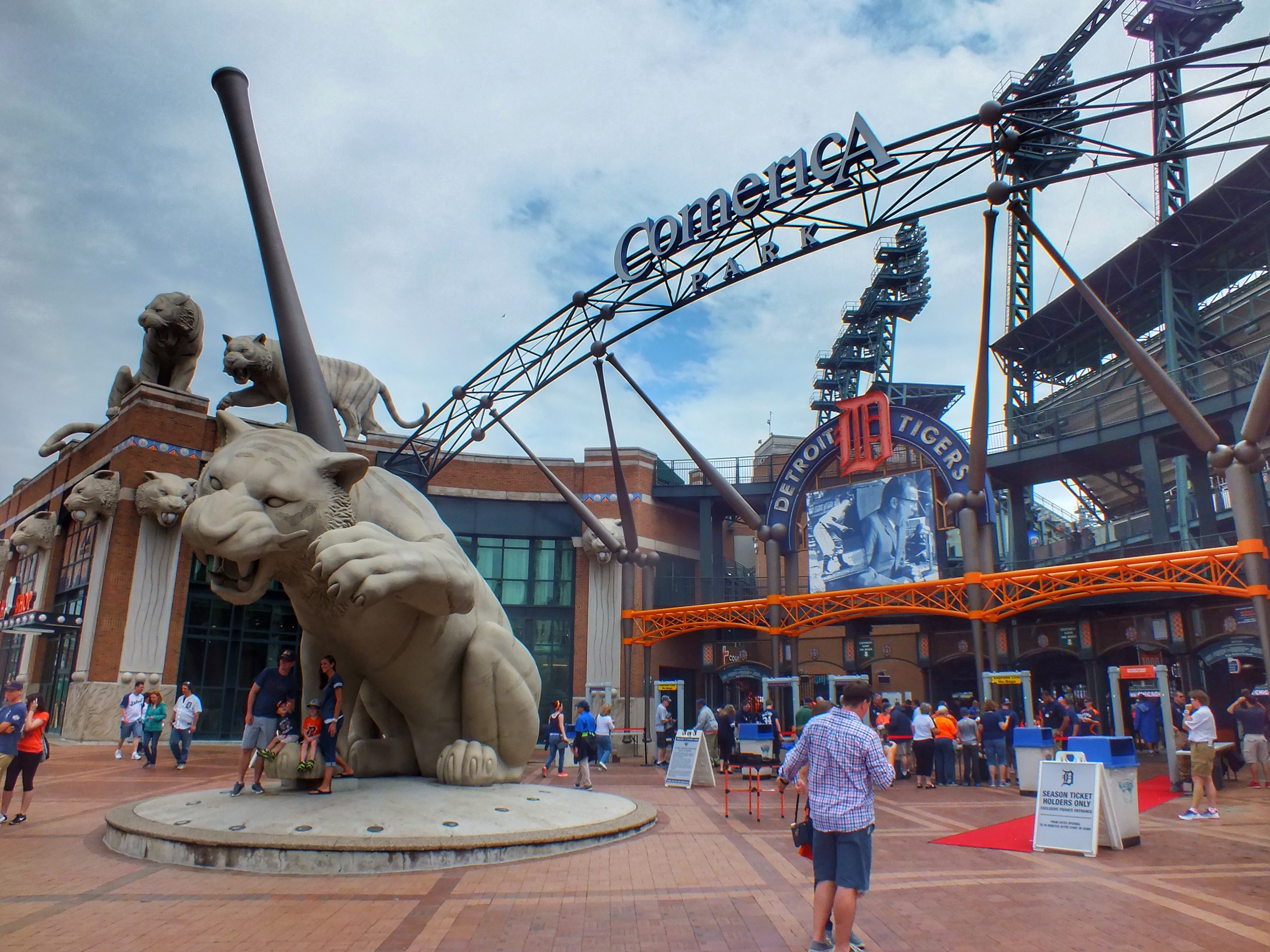 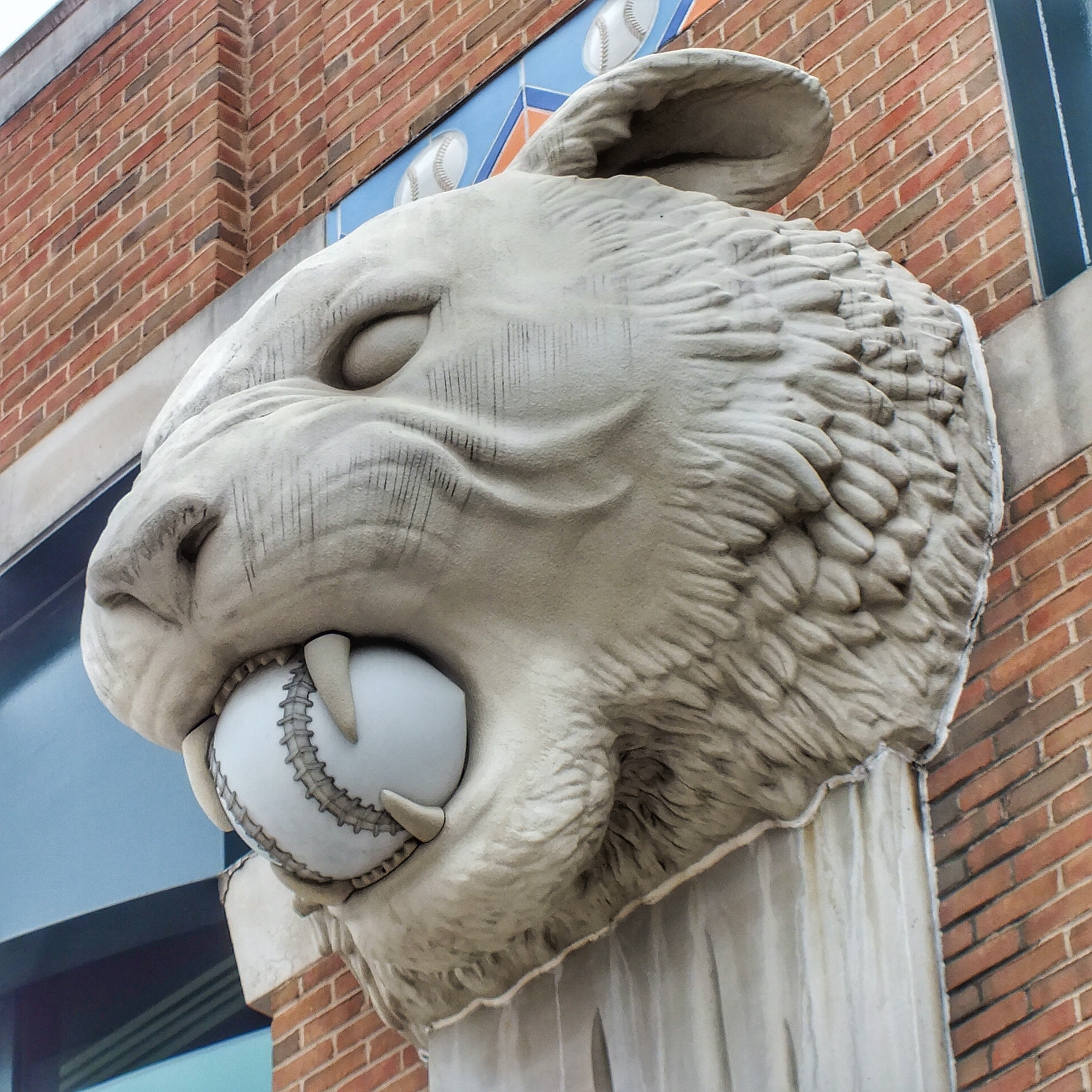 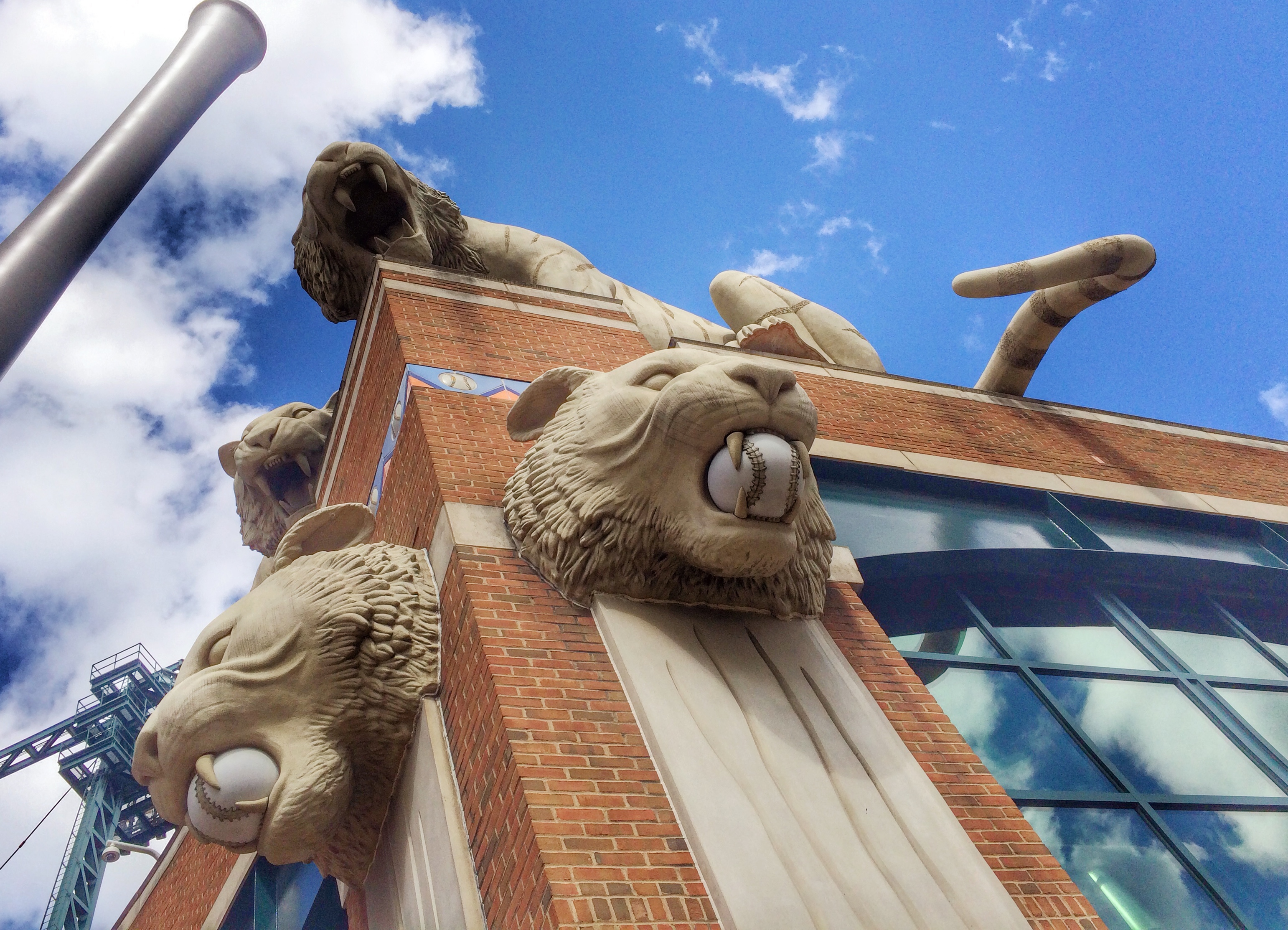 We had to stand in line to get a photo with the giant tiger by the main gate. 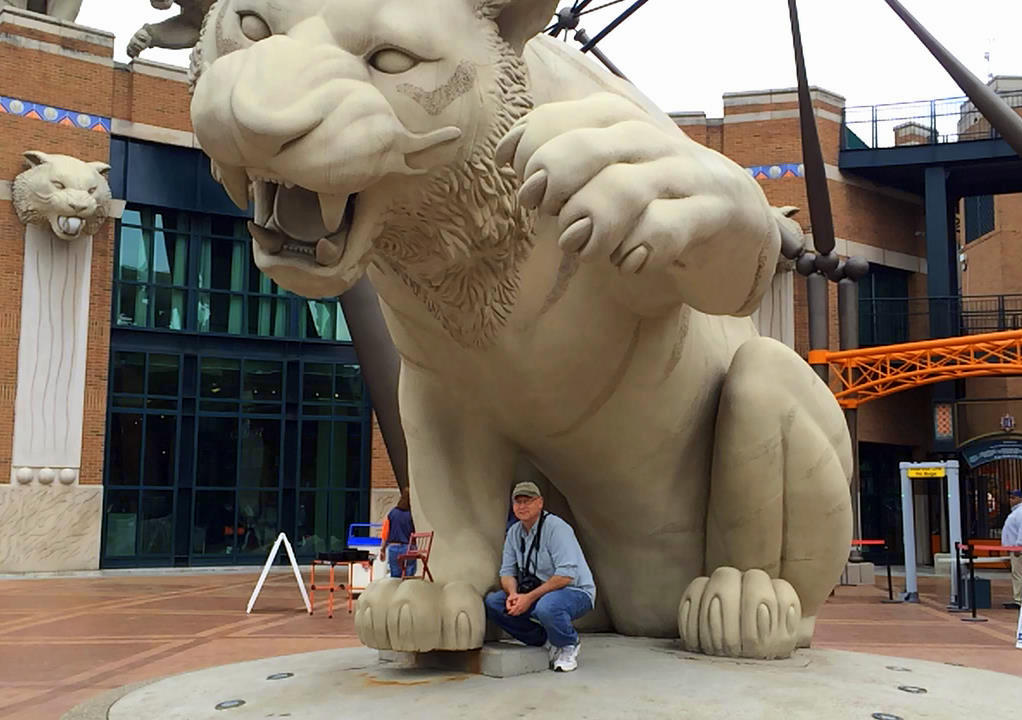 My phone was on video for the above shot, so the top of the tiger’s head got cut off. I tried again after the game when the area was much busier … I wonder what that young couple will think when they take a good look at their photo. 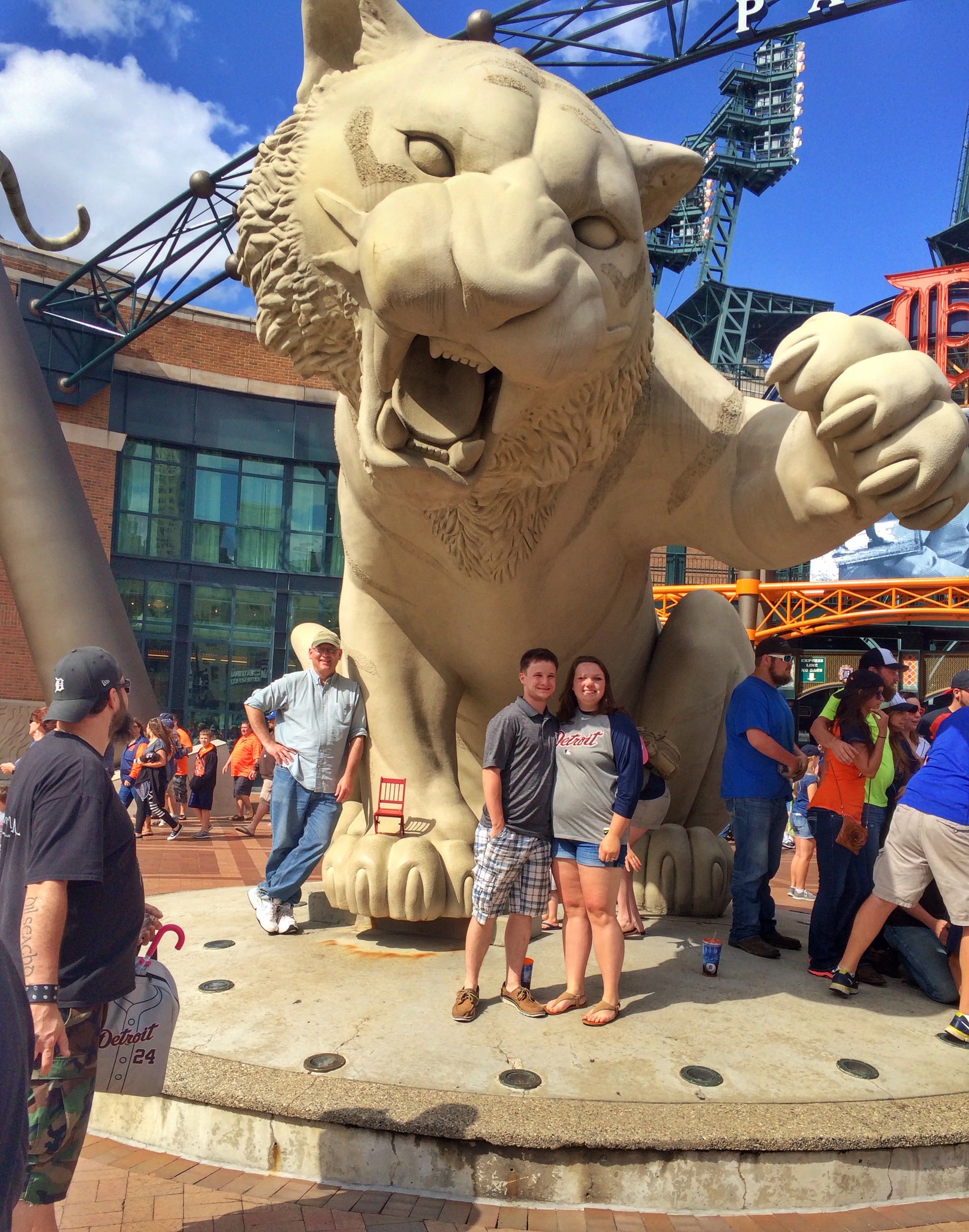 Moments after we entered, I saw four members of the Tigers Energy Squad posing for photos with fans. I walked up and asked if I could take their picture with the chair. The blonde on the right started to say no but the two girls in the middle laughed and took the chair. 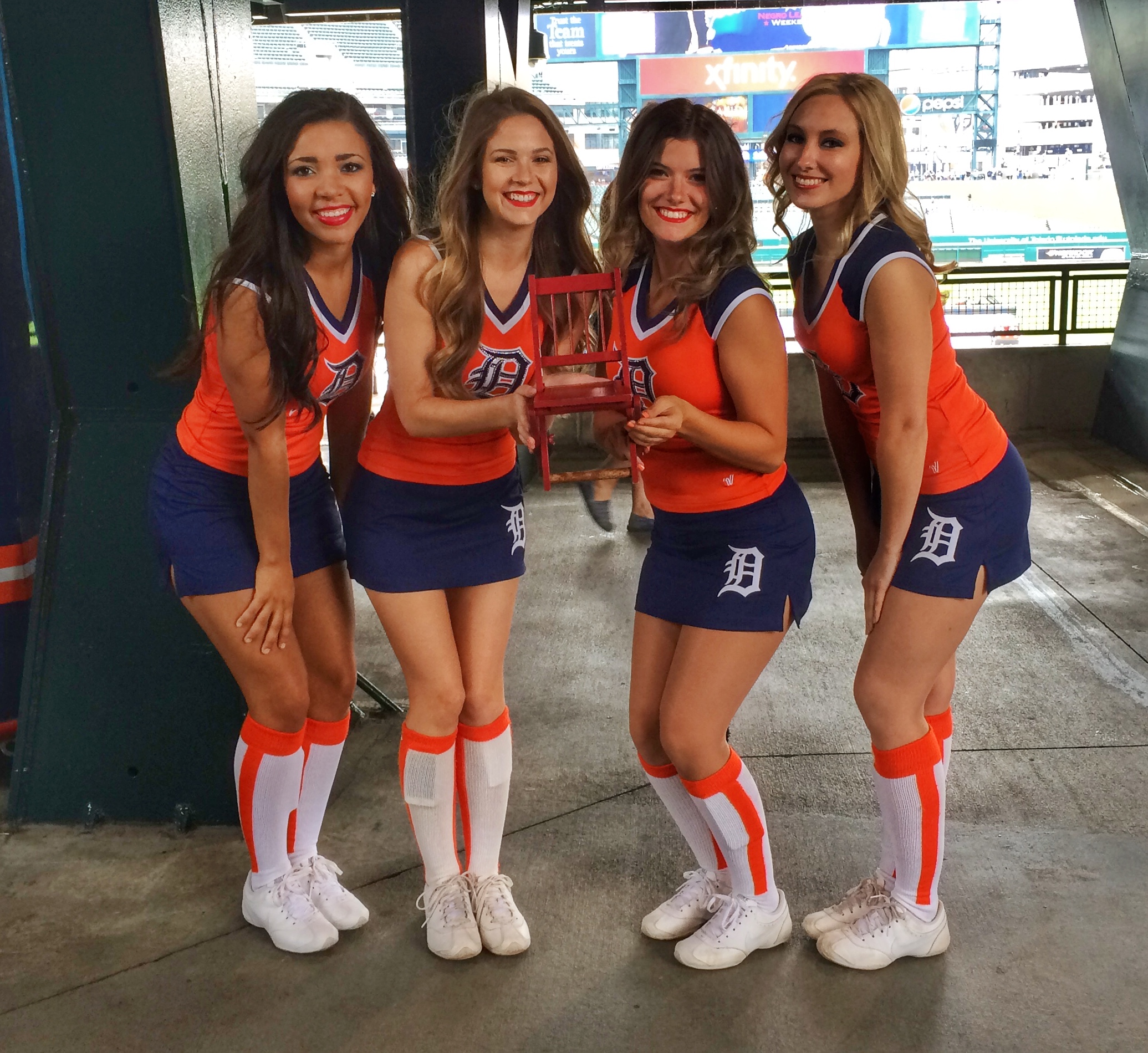 Willie Horton, Tiger great from the 60’s and 70’s, was at a table signing autographs. I asked his bodyguard if I could get his photo with the chair. He was very friendly and we stood and chatted for a couple minutes until the line thinned. He then introduced me to Willie. Willie didn’t have any idea what was happening, but he took the chair and smiled. 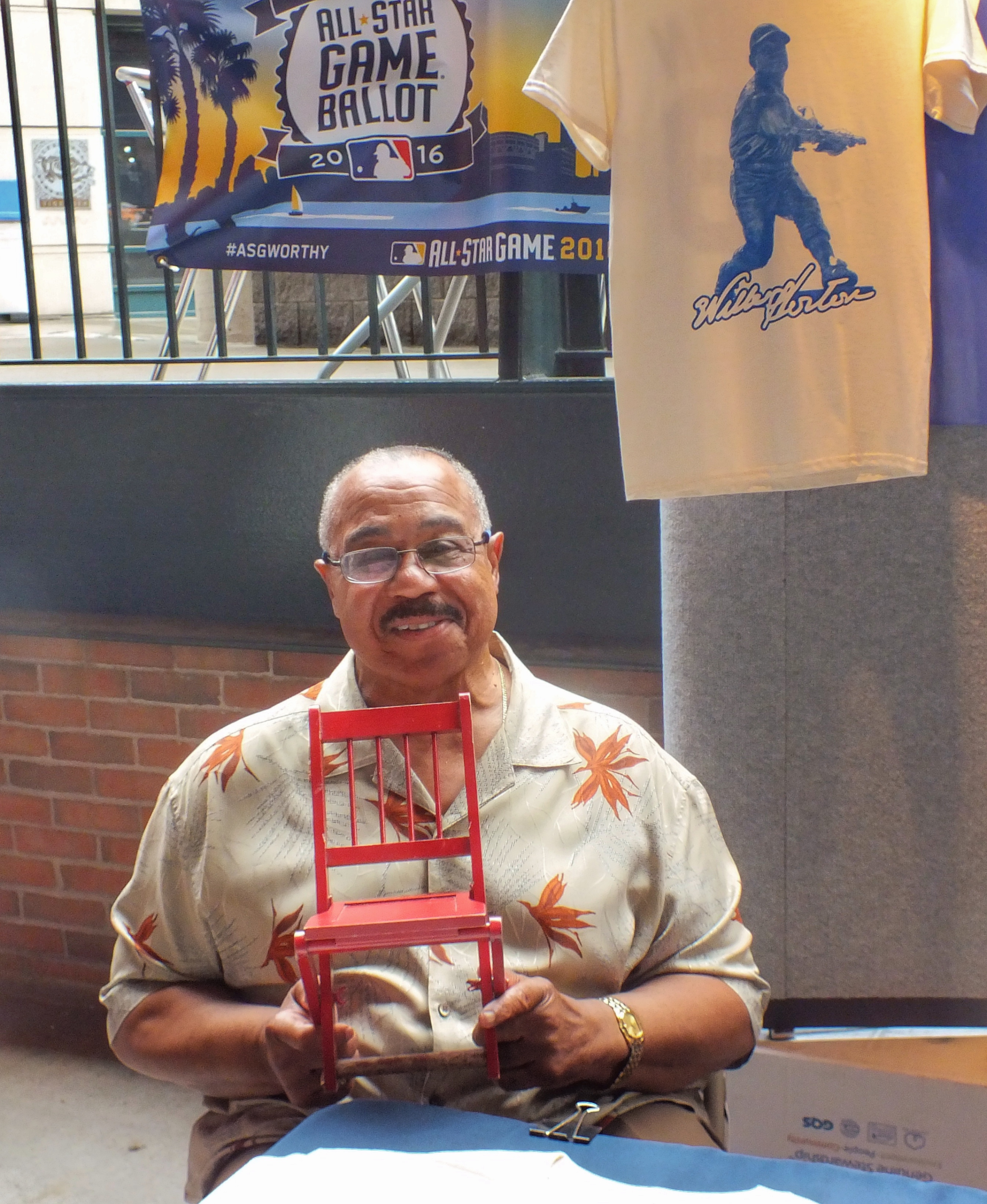 It was raining and the tarp was on the infield. As soon as it stopped, we found our seats.  The groundskeepers were in the process of dumping water off the tarp. 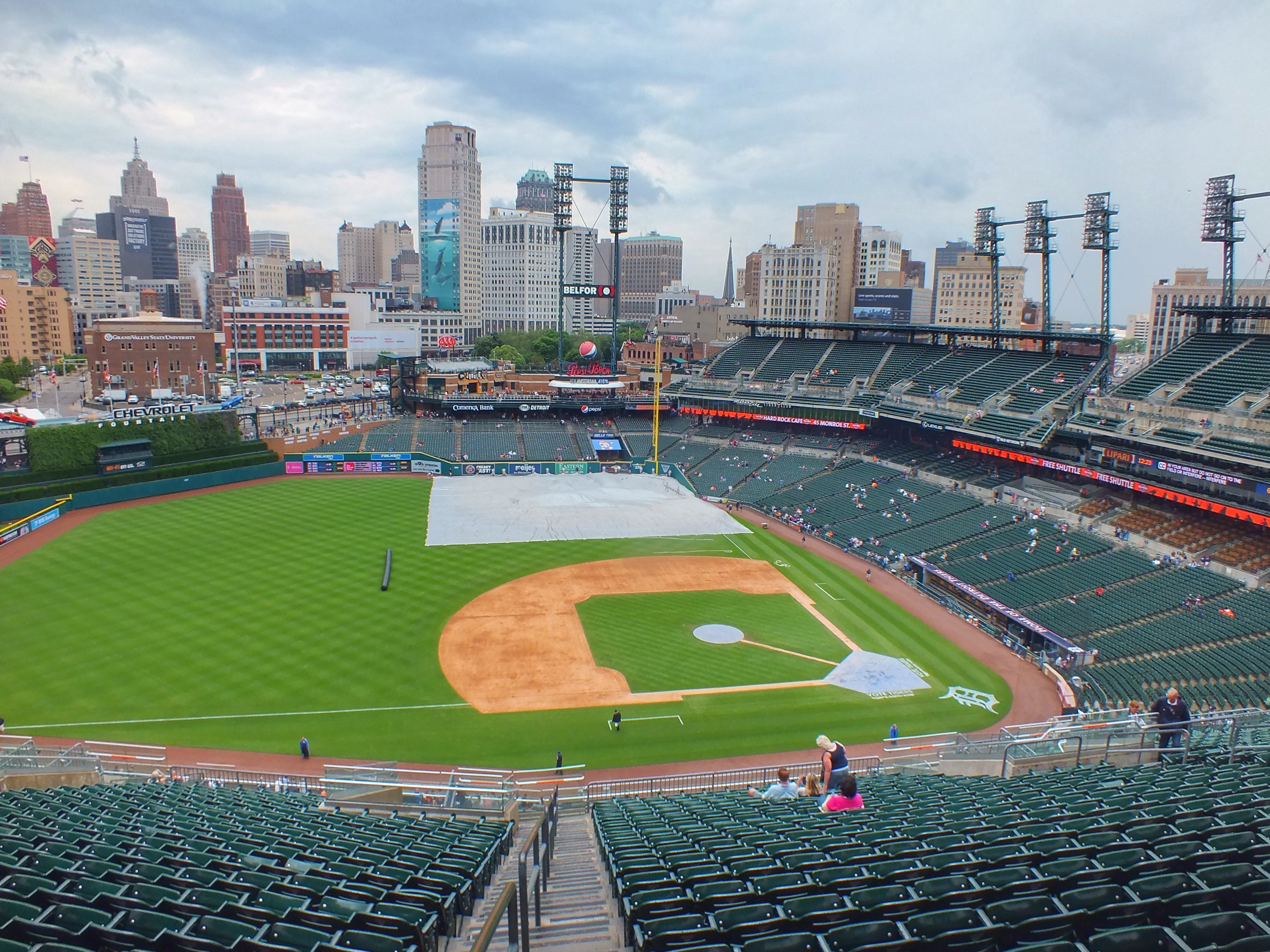 I walked around the field and take photos. It soon began raining again, and I got wet. 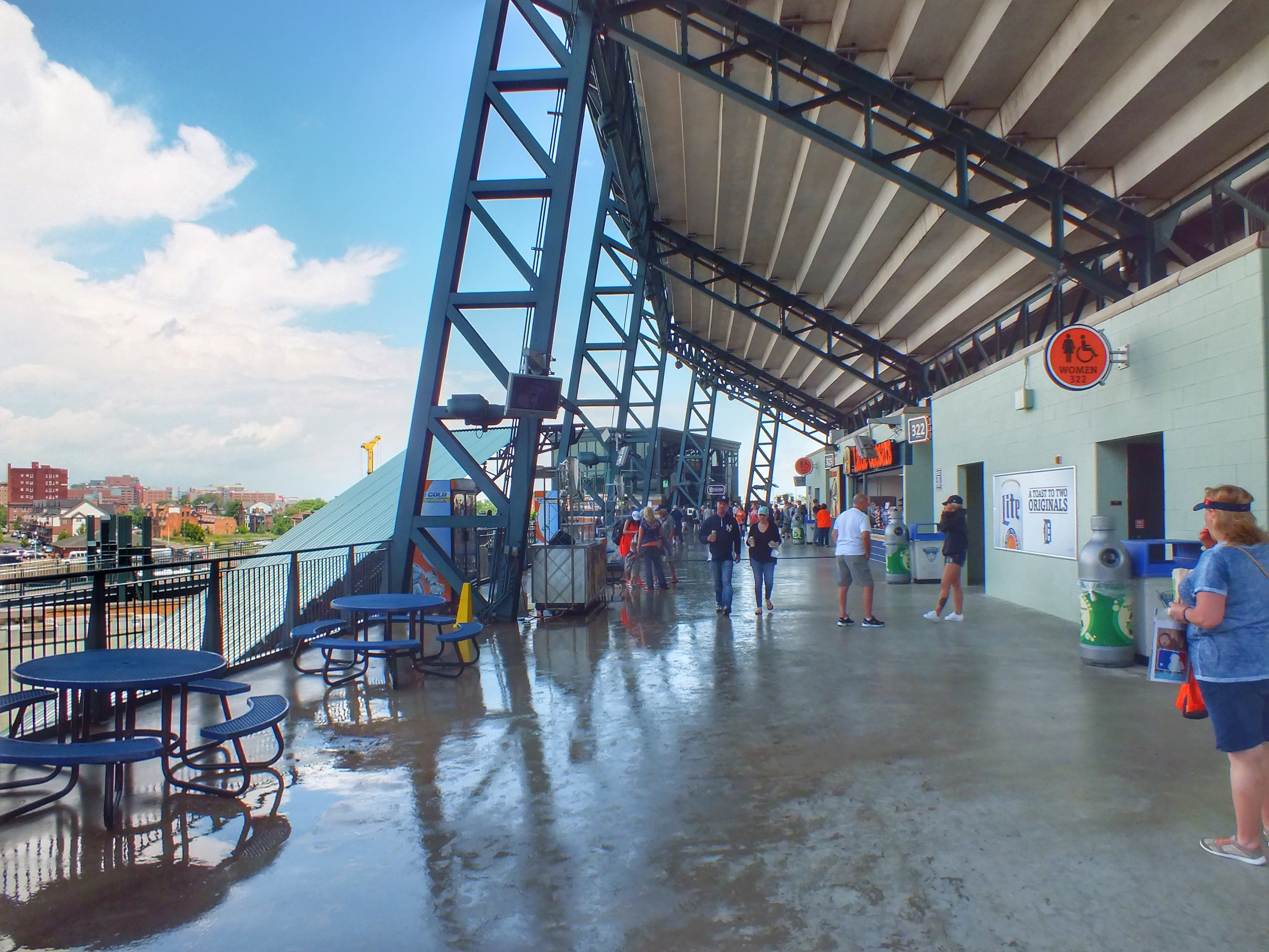 I wandered down to the Tigers dugout. 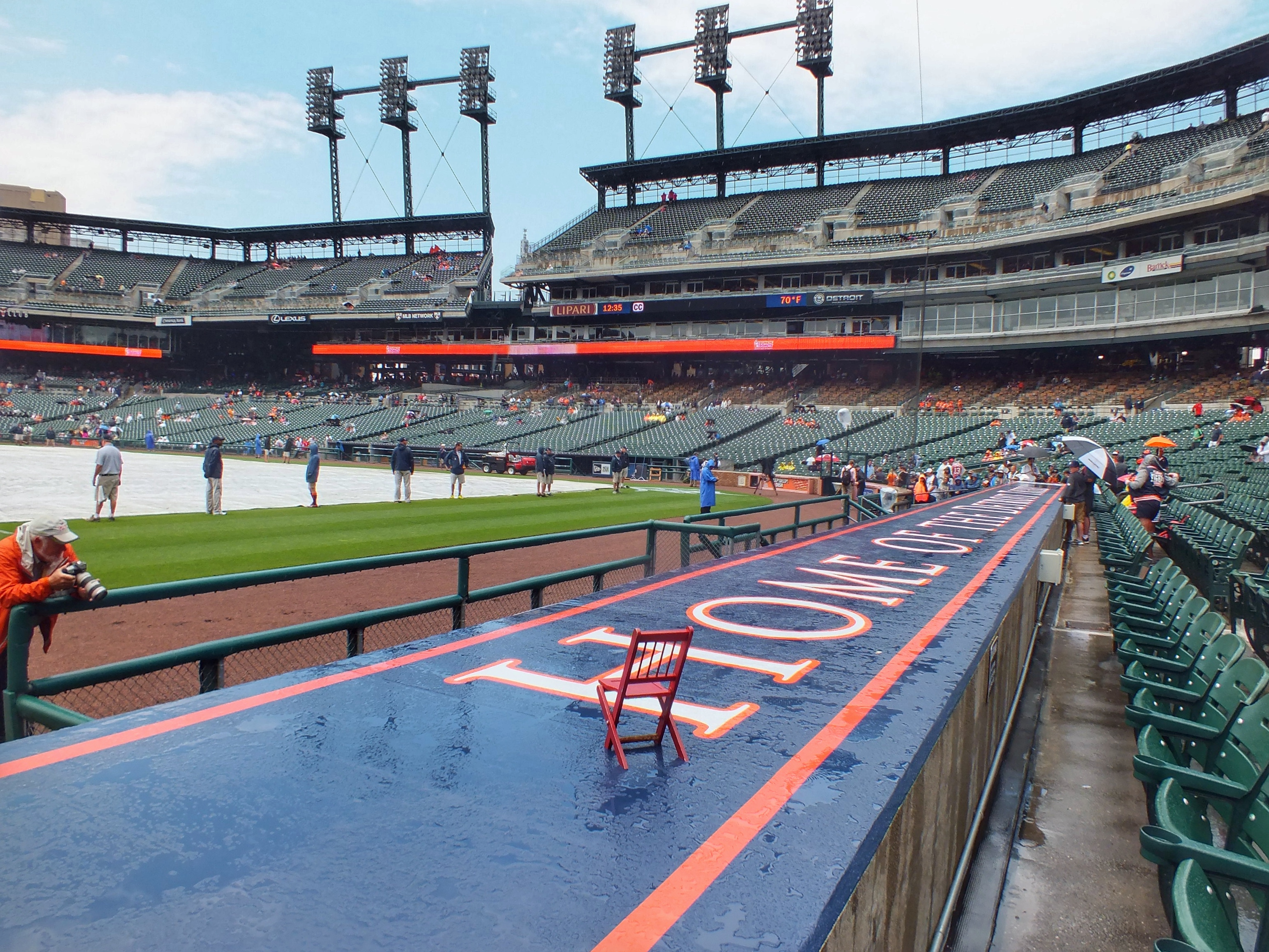 The Willie Horton statue in the left field stands. Beyond him is Ty Cobb, Hank Greenberg, Charlie Gehringer, Hal Newhouser, and Al Kaline. 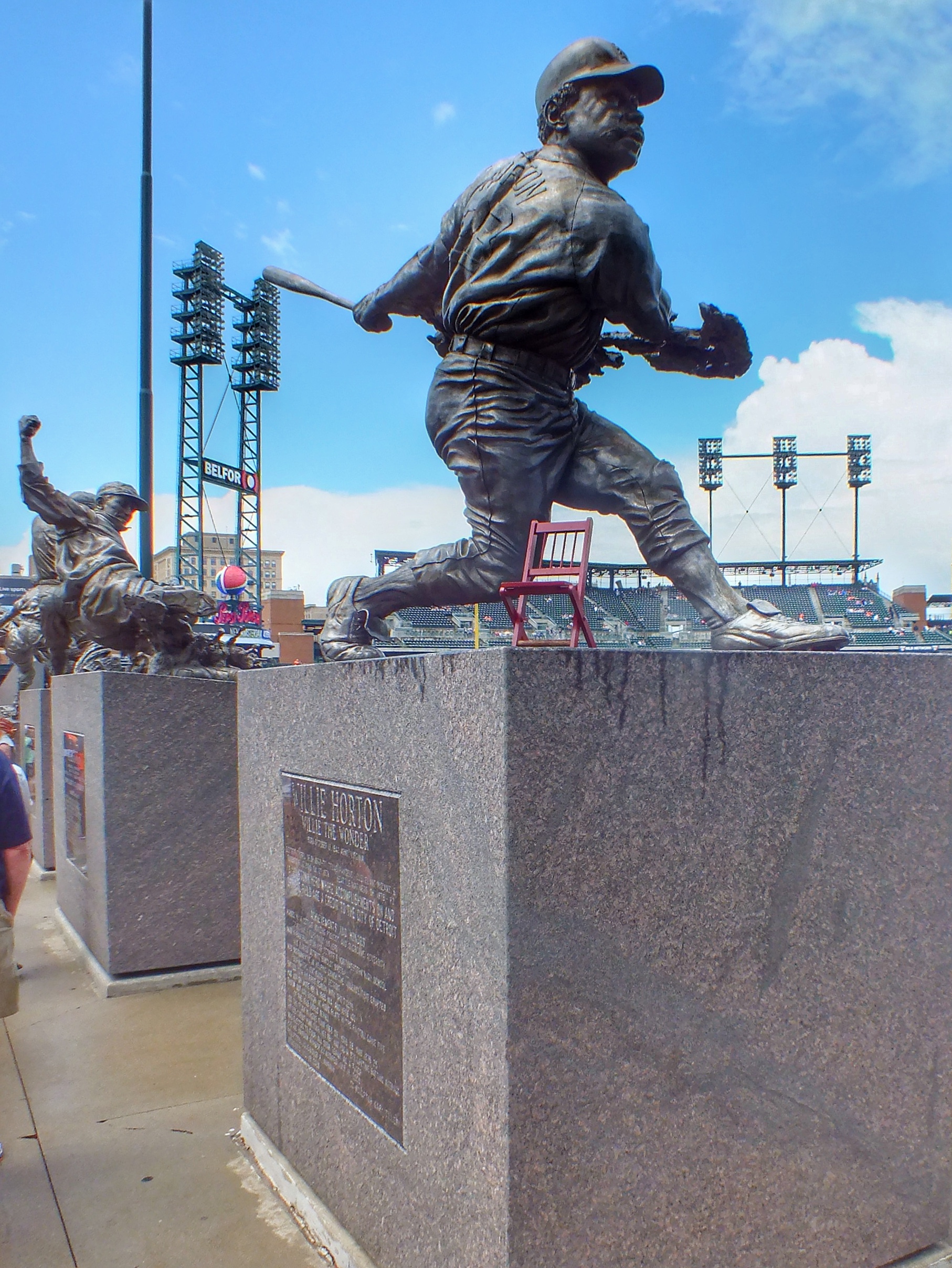 The bullpens beyond the left field wall 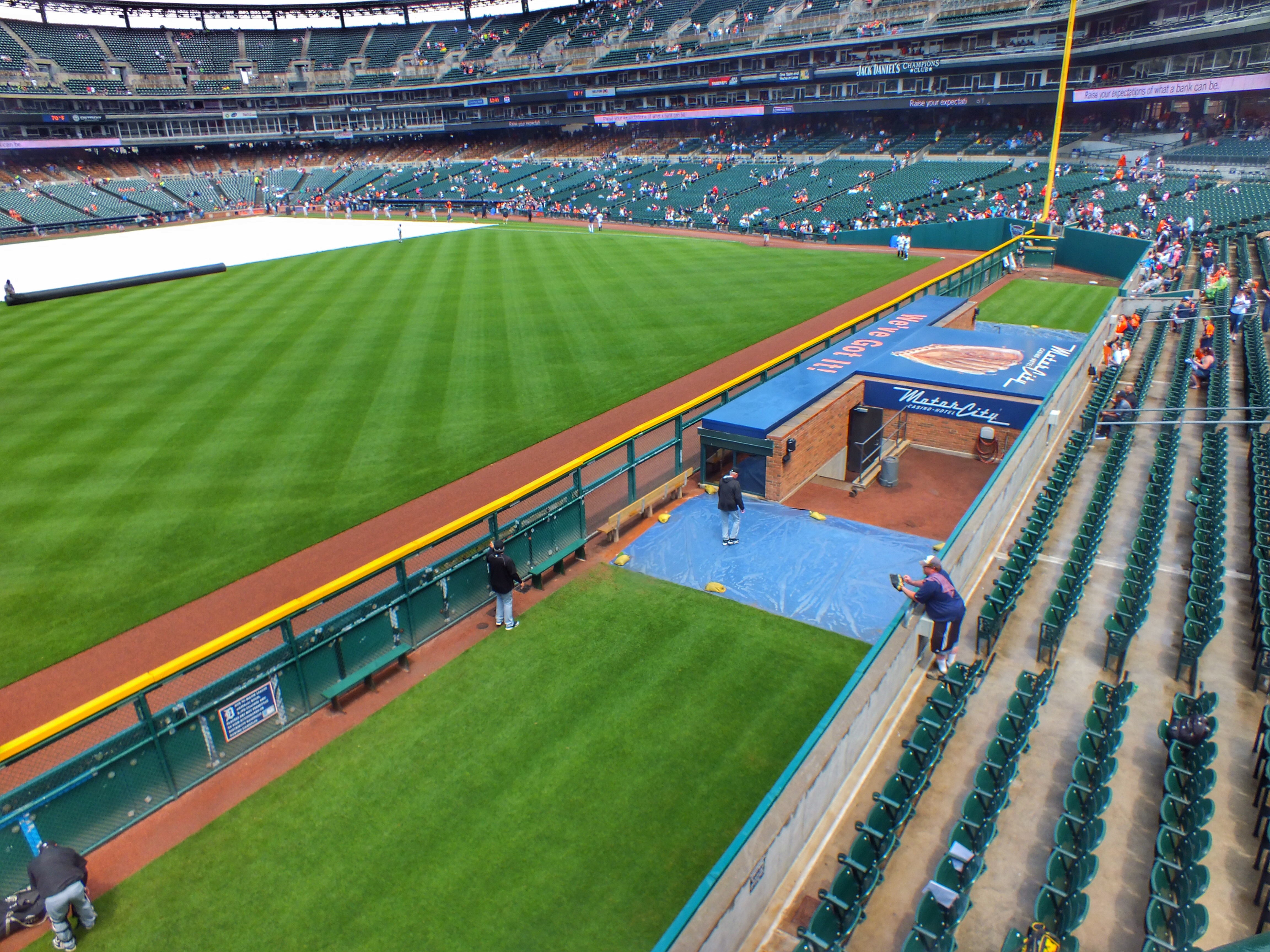 Looking in toward the infield from above the bullpen 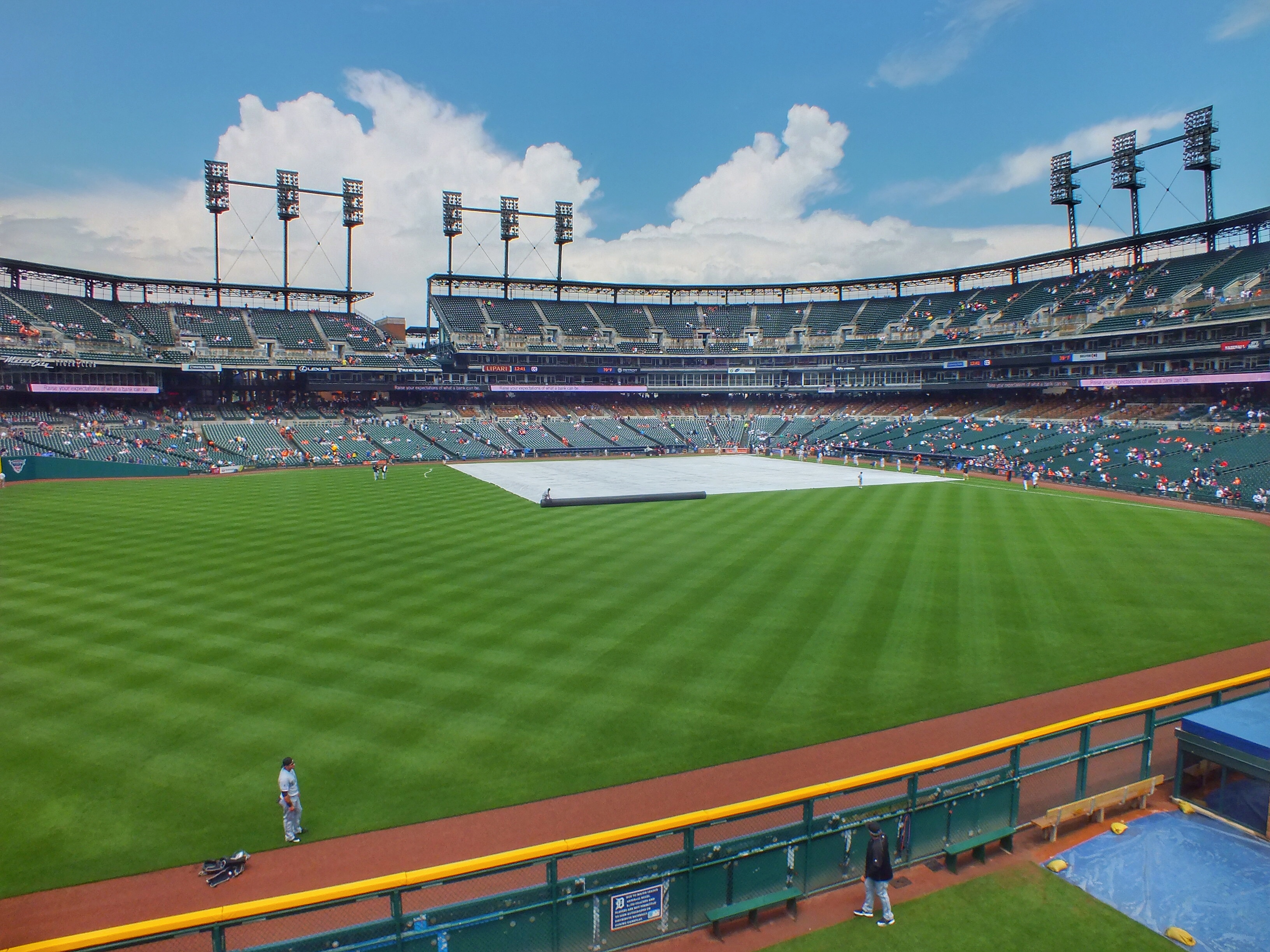 The rain stopped and the groundskeepers removed the tarp. 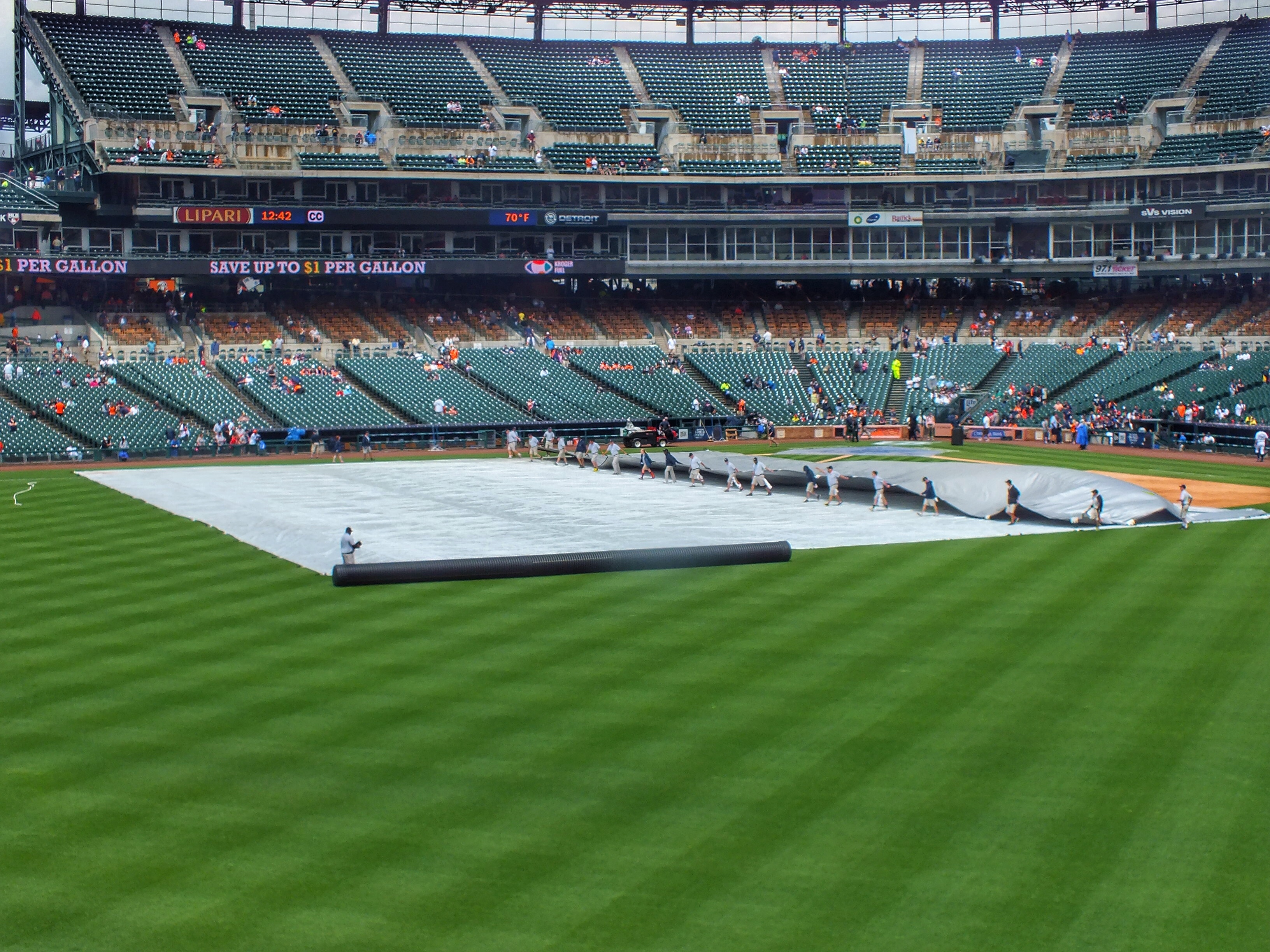 The scoreboard with tigers on the top. Note the vines on the batter’s eye, copying Wrigley Field. 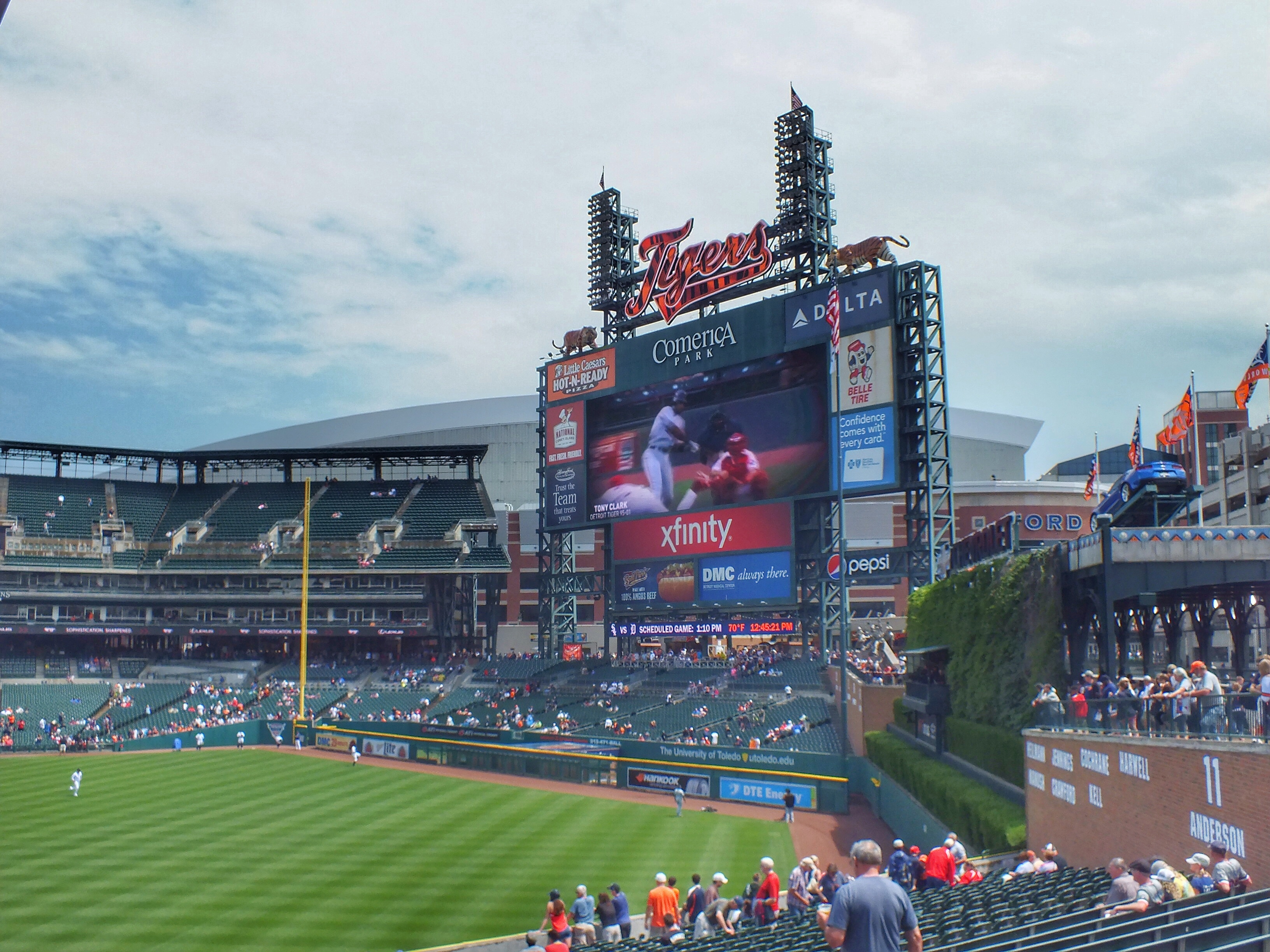 The entrance from inside the park 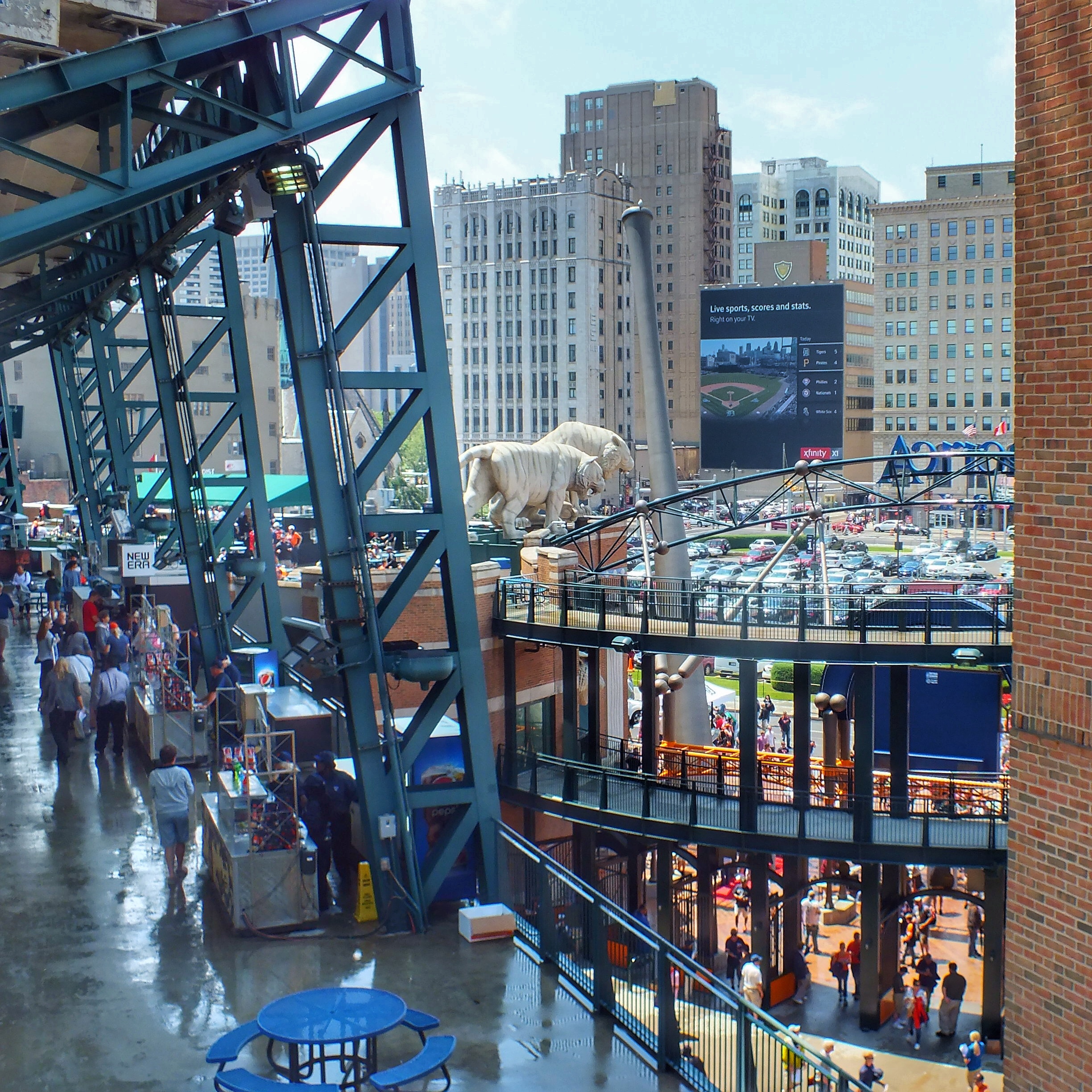 I opted not to take a ride on the baseball Ferris wheel. The view didn’t look thrilling. 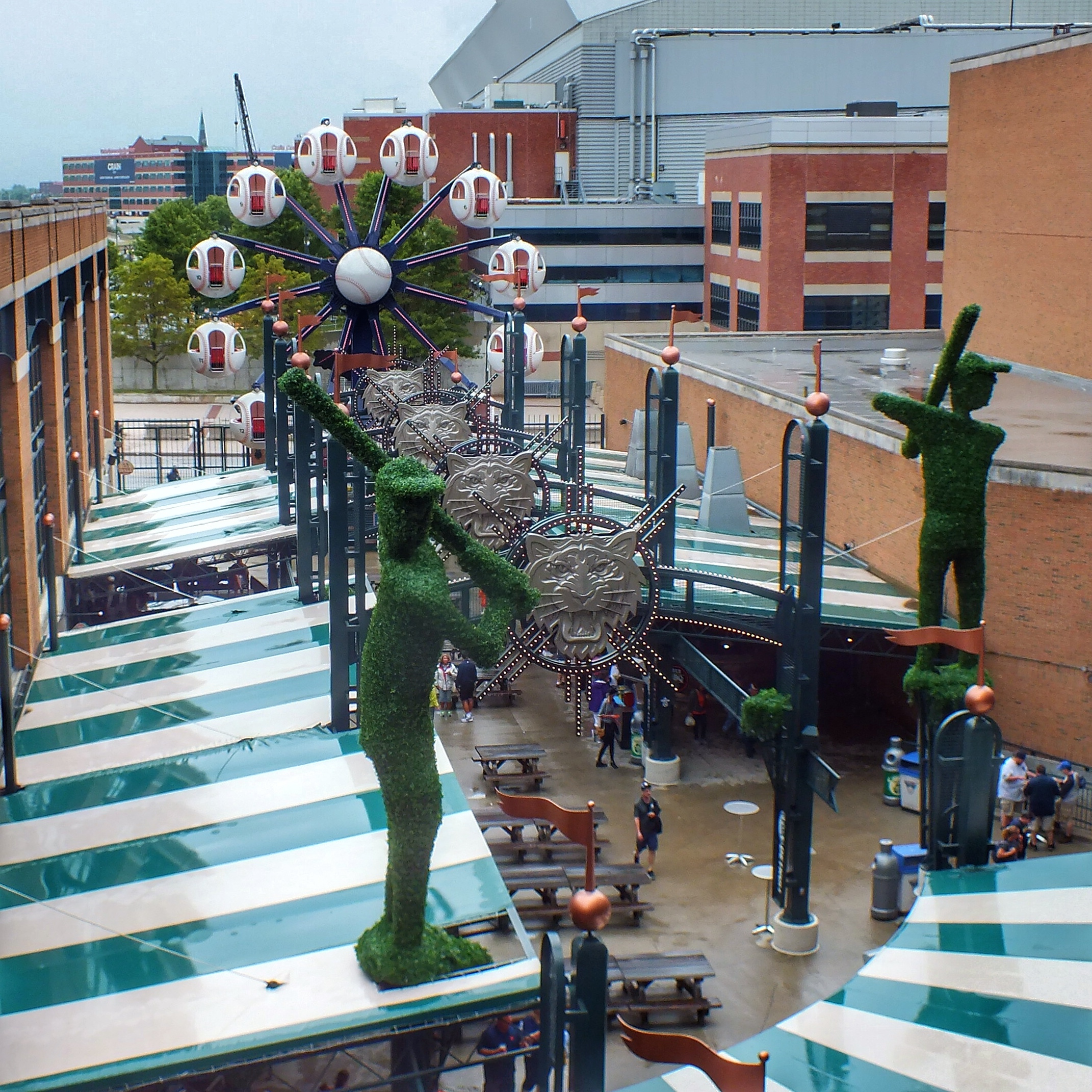 The stadium has a fountain on top of the batter’s eye. It goes off when the Tigers do something exciting. 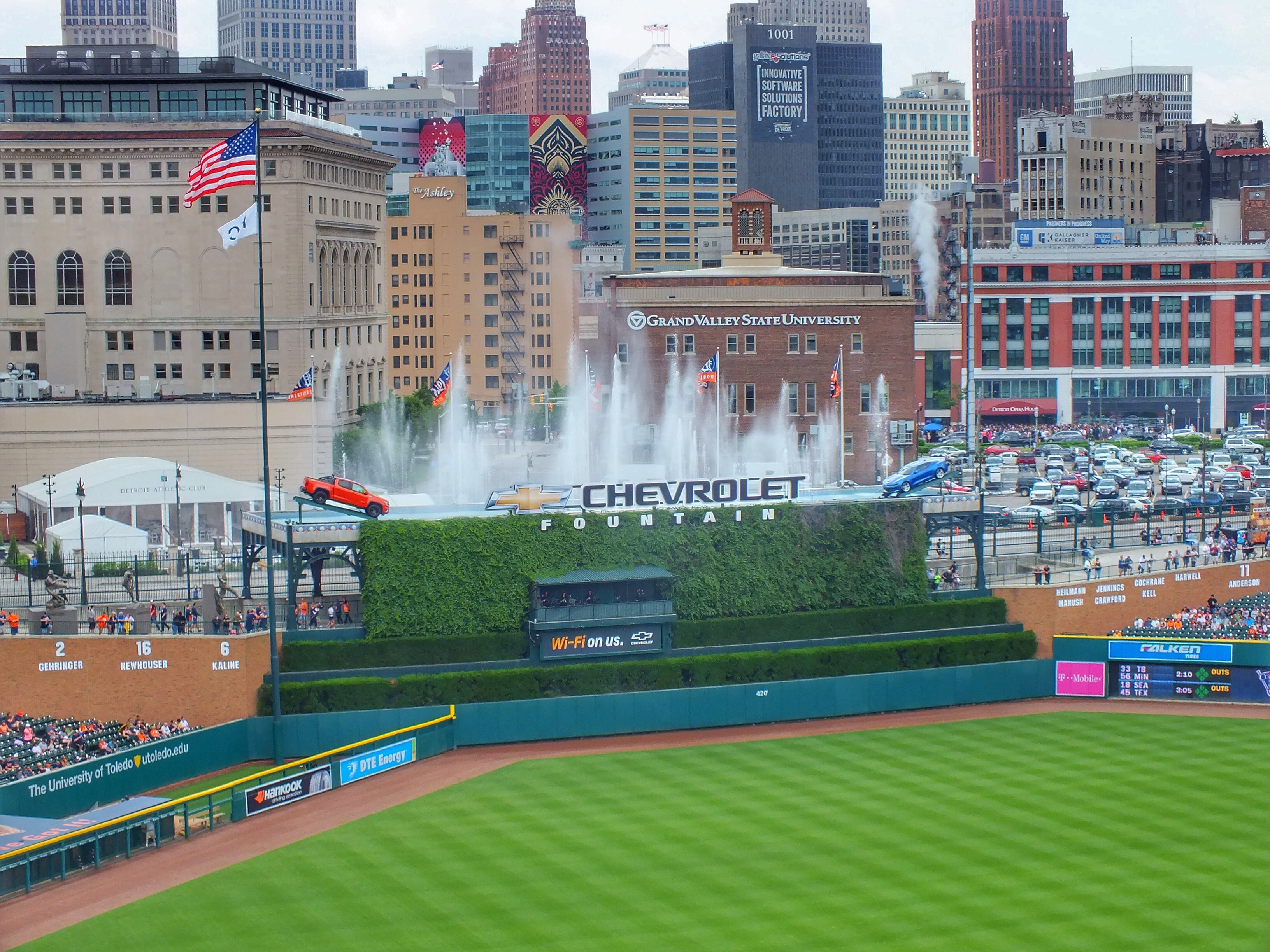 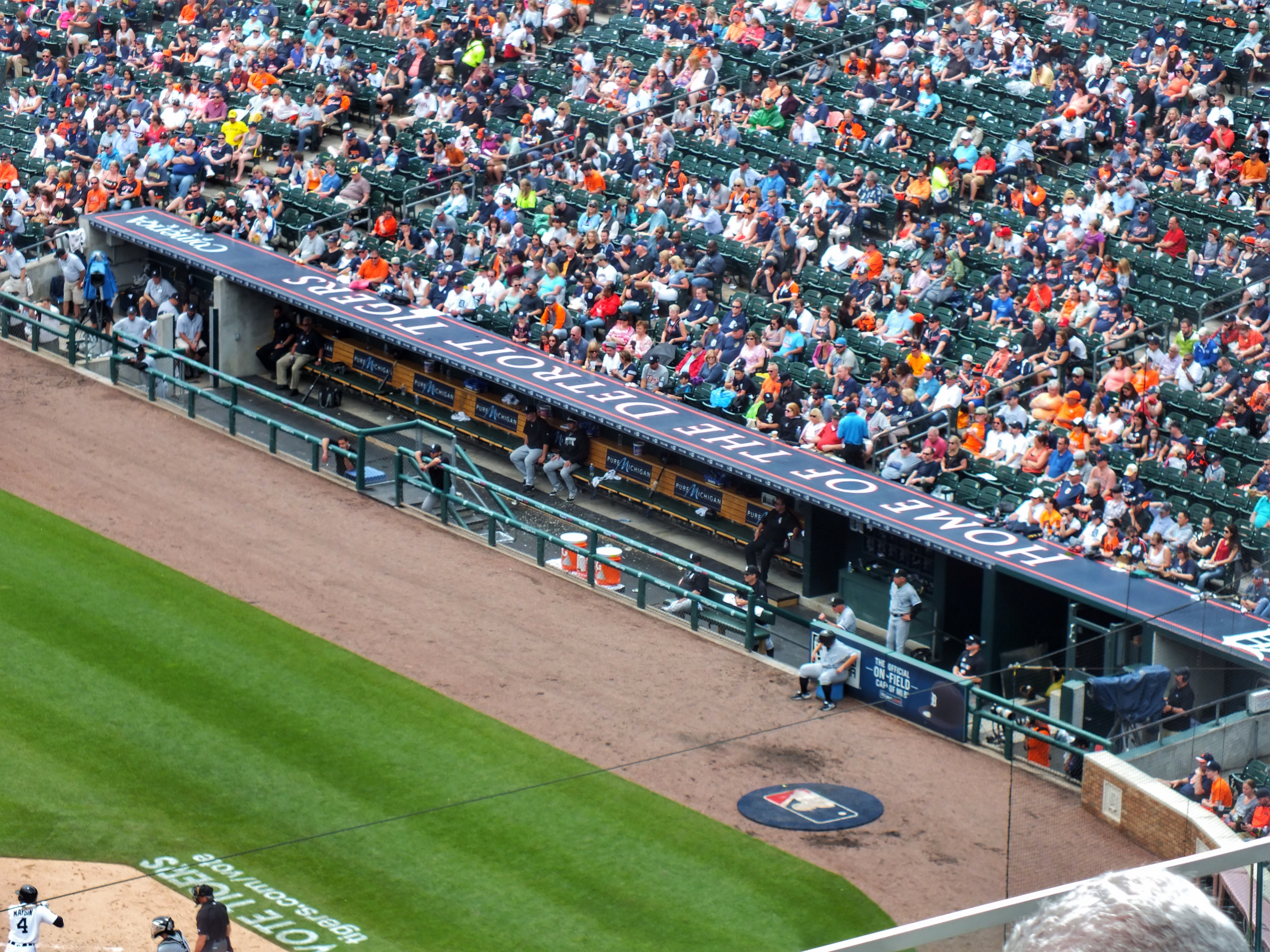 Our friends showed up right at game time. Shortly after the game started, it began raining again. A lot of people huddled under umbrellas and raincoats, but the game continued. Justin Verlander pitched for Detroit. 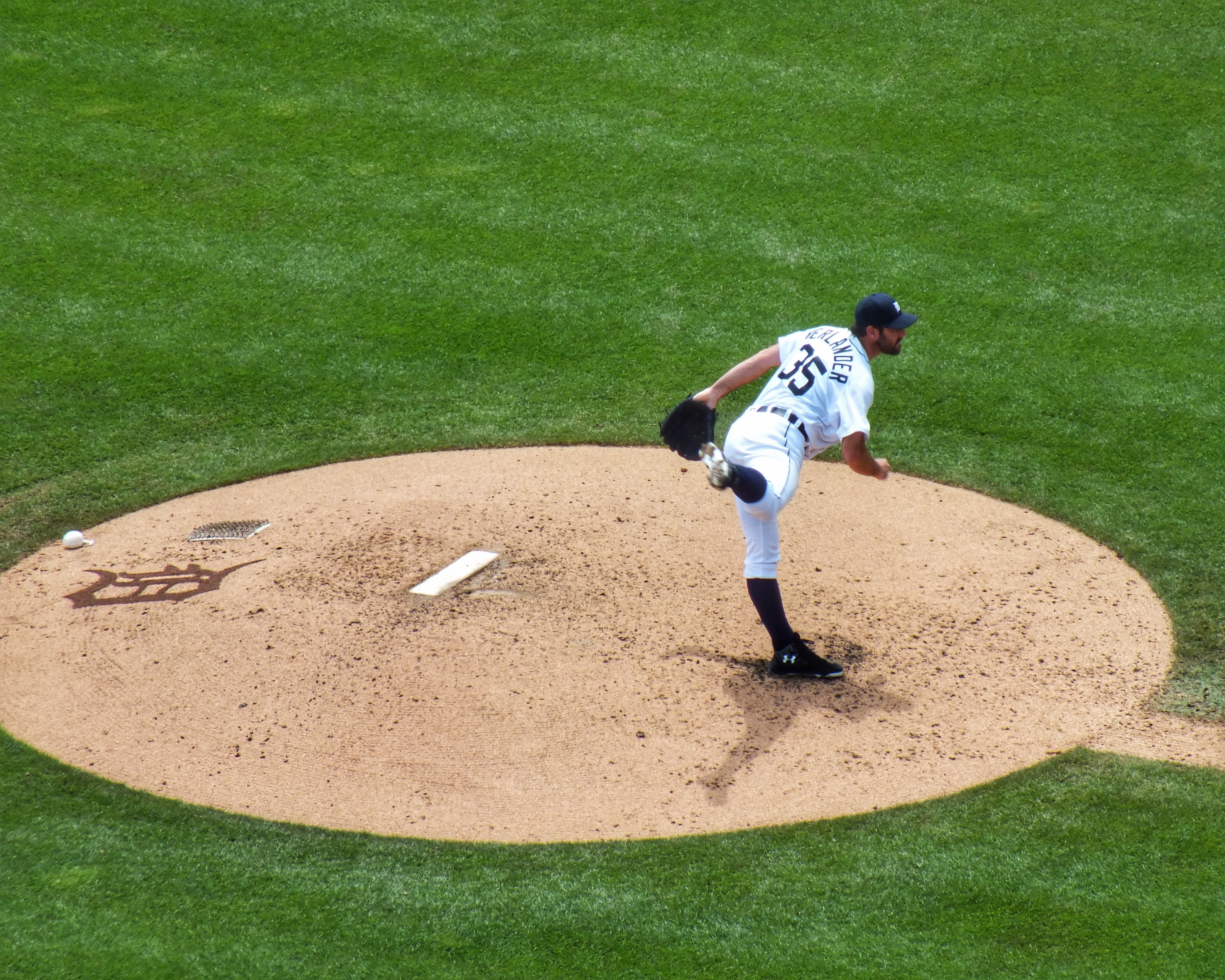 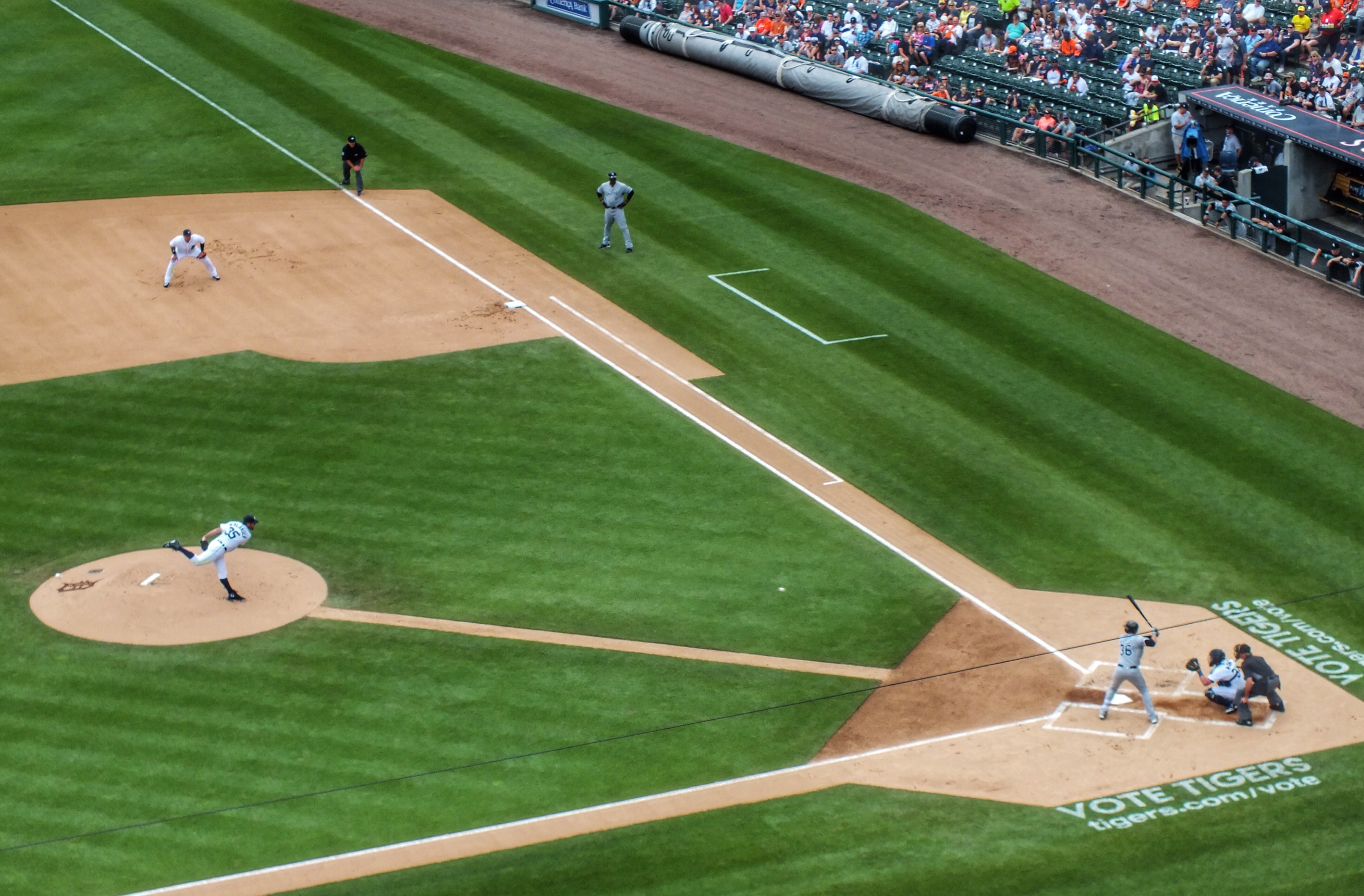 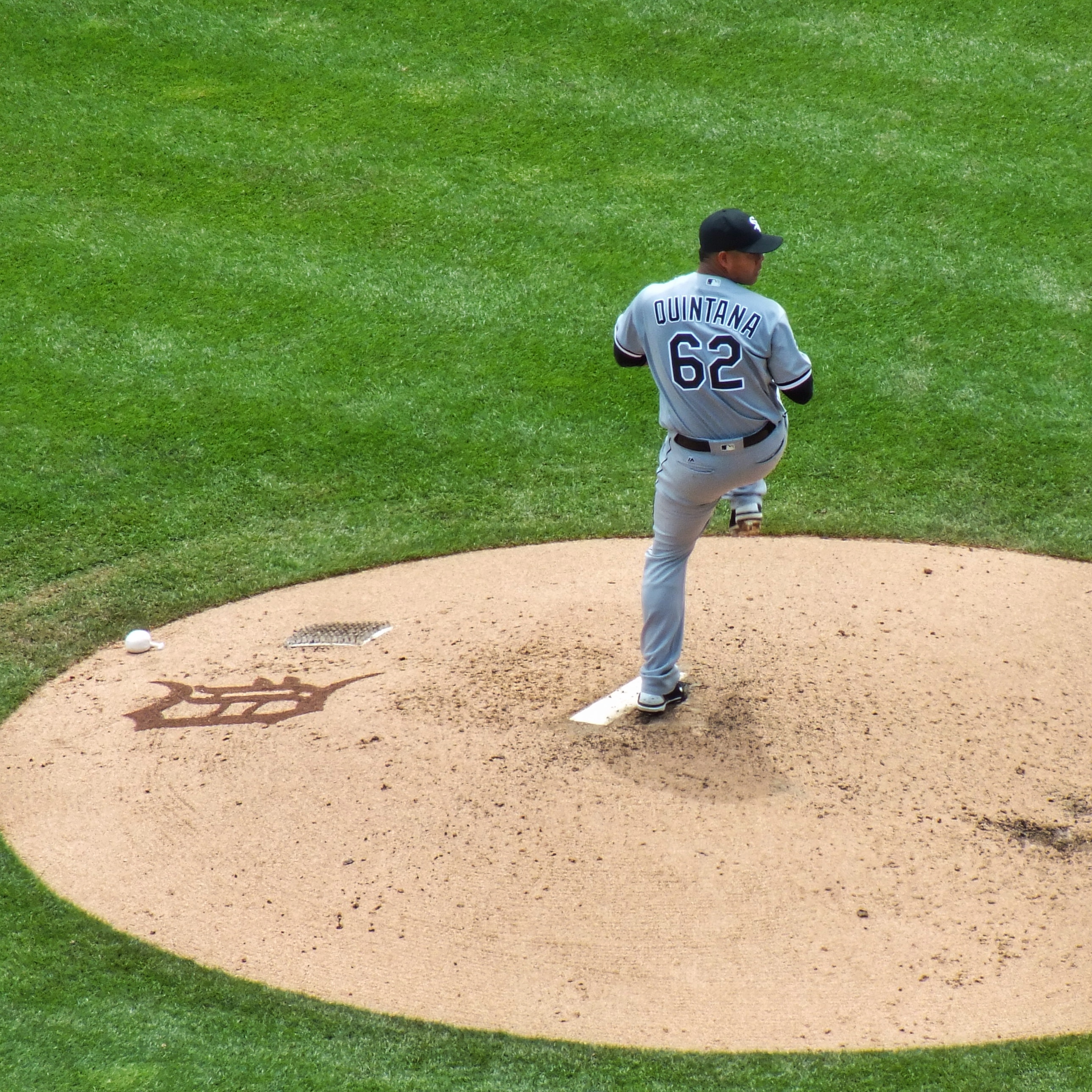 The White Sox scored a run in the first on a home run by Jose Abreu. The Tigers came back with one in the third and four in the fifth on a walk, an infield single and a double by Justin Upton. Todd Frazier hit a home run for the Sox in the sixth. 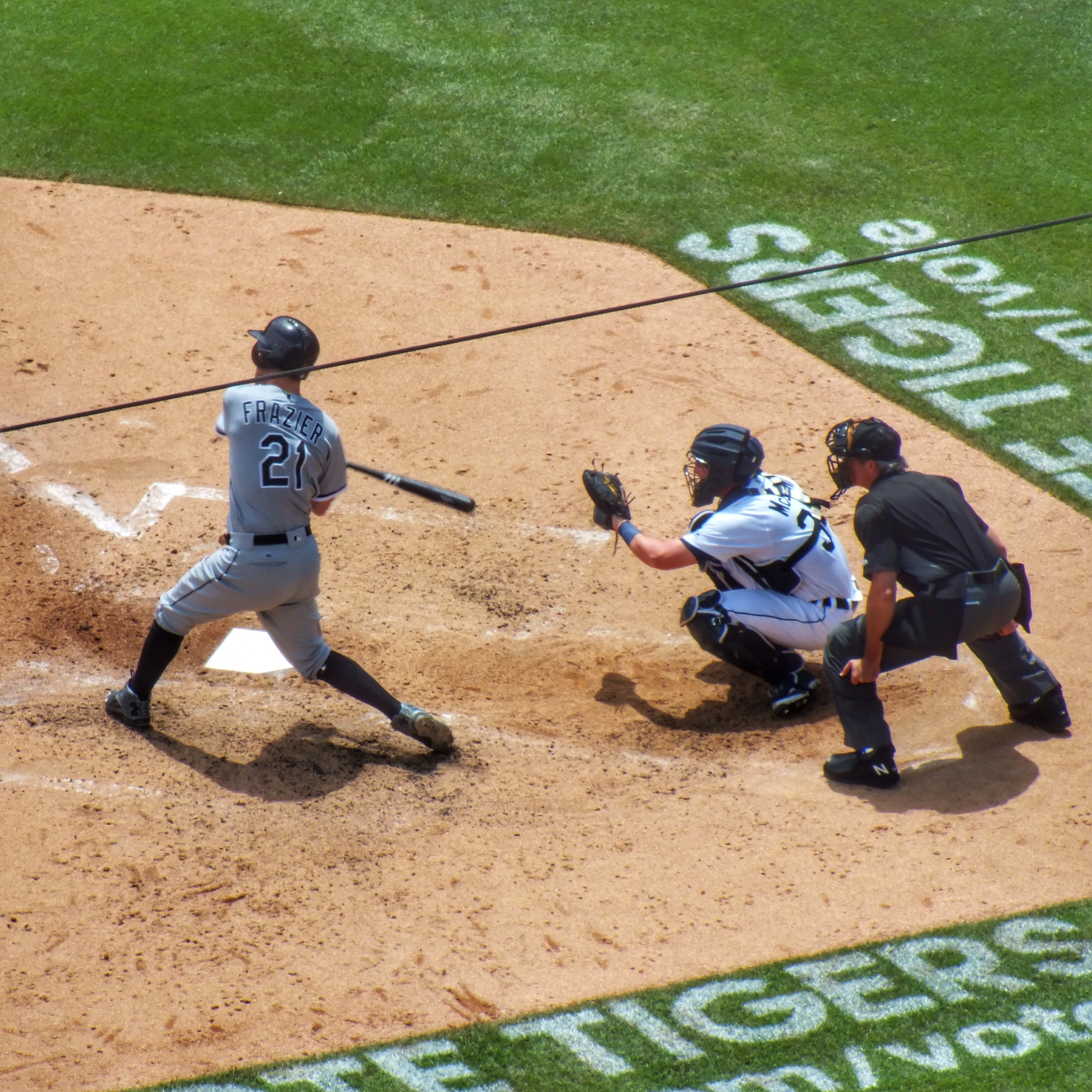 The park was very quiet for the first several innings. I think a lot of people came late because of the rain. It was so quiet that it was hard to follow the game from way up where we were sitting. Things got a little louder when the Tigers began scoring. 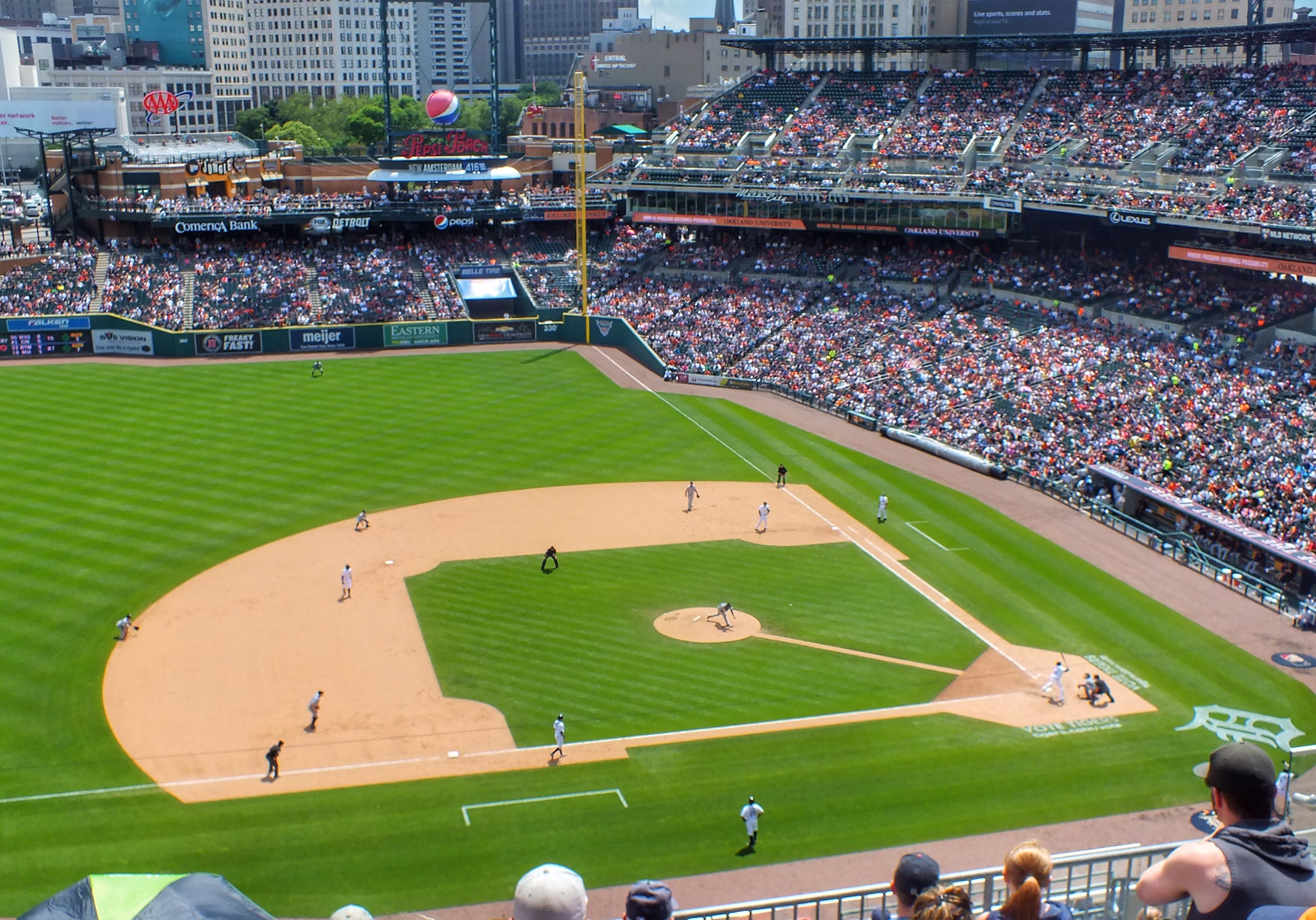 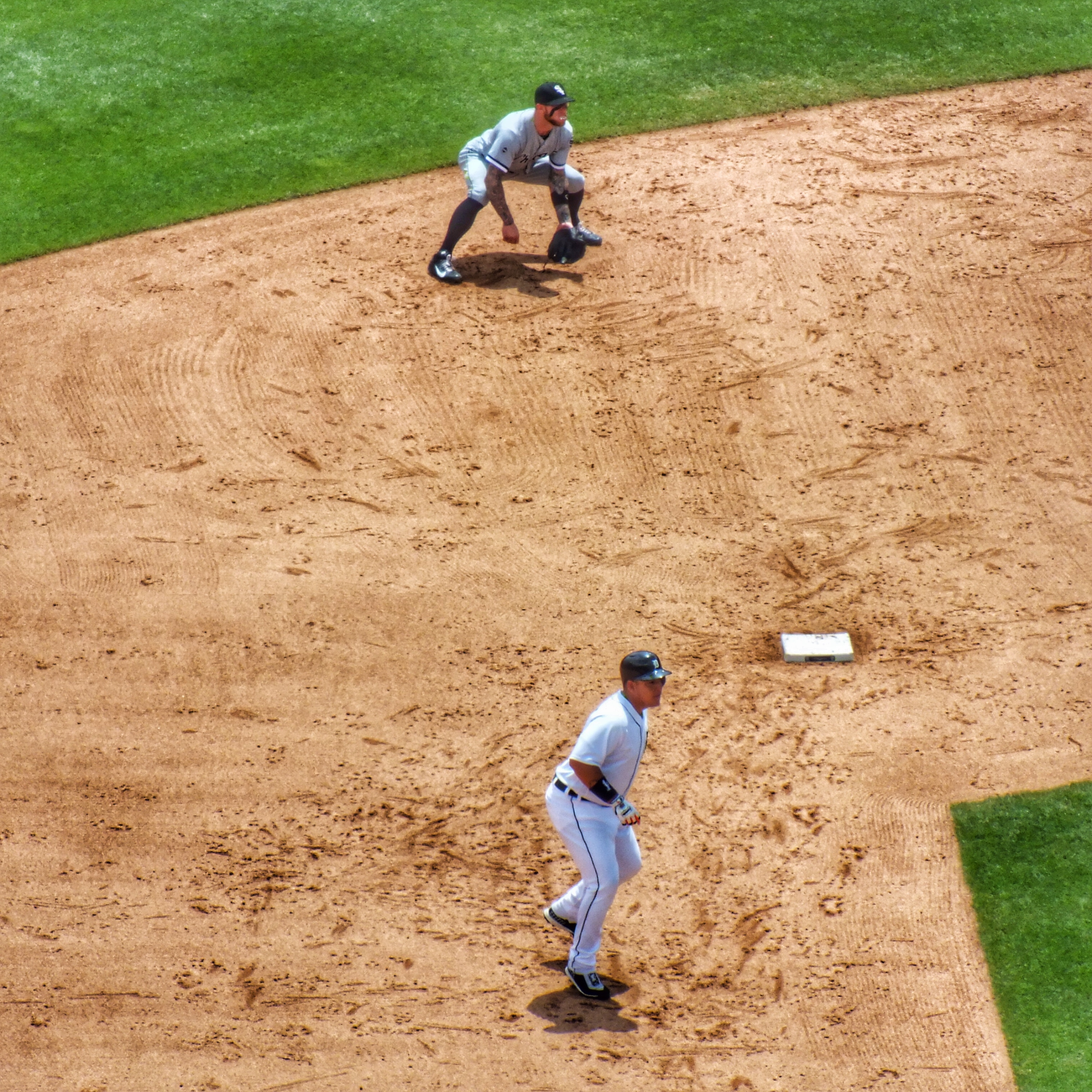 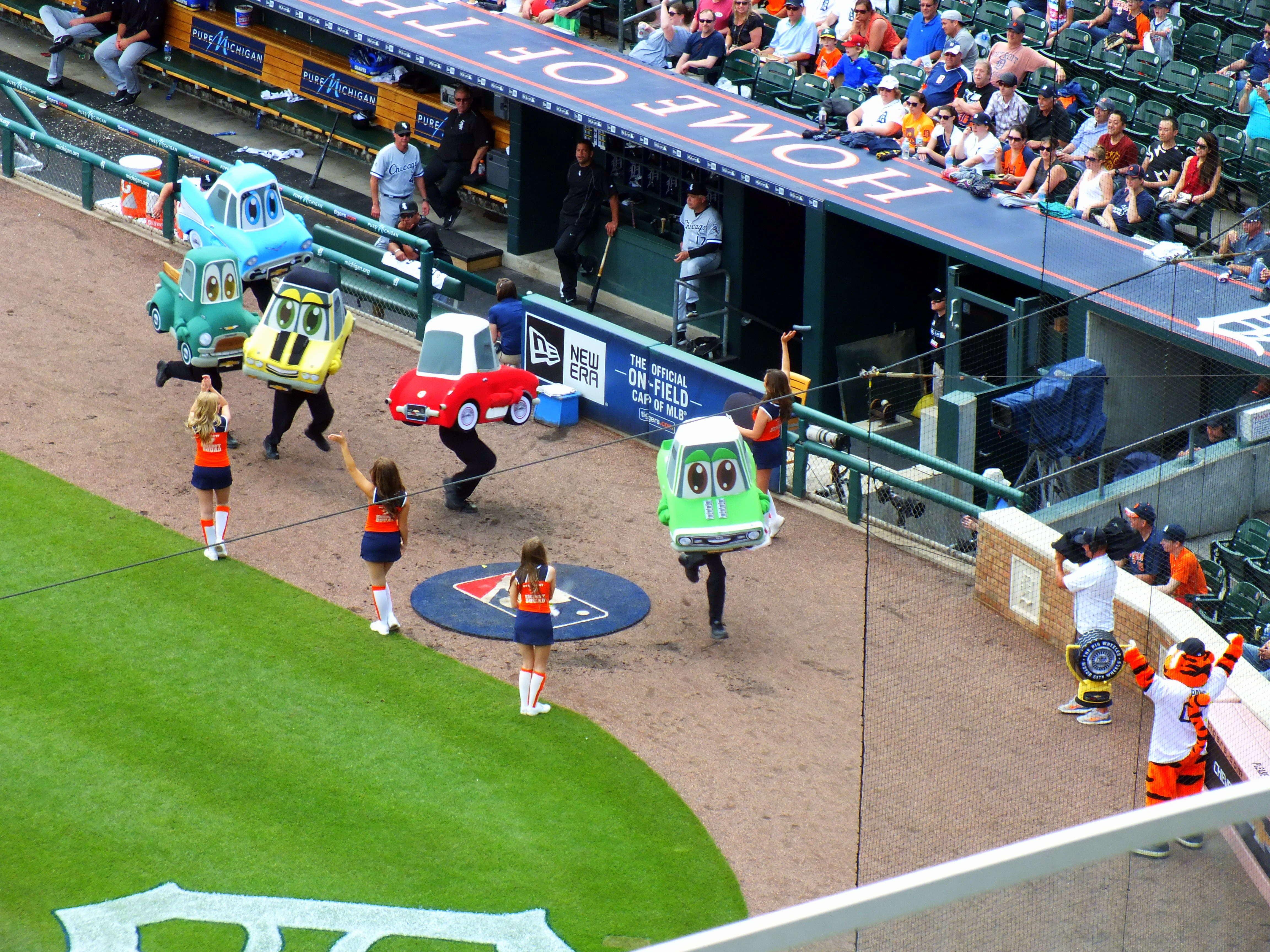 The view of downtown Detroit from our seats

The park was enjoyable with the tiger statues and the fountain and downtown Detroit filling the view. The game was a bit dull. I truly didn’t care who won. The weather wasn’t bad for a summer afternoon — a bit of rain early and direct sun later, but with a cool breeze. 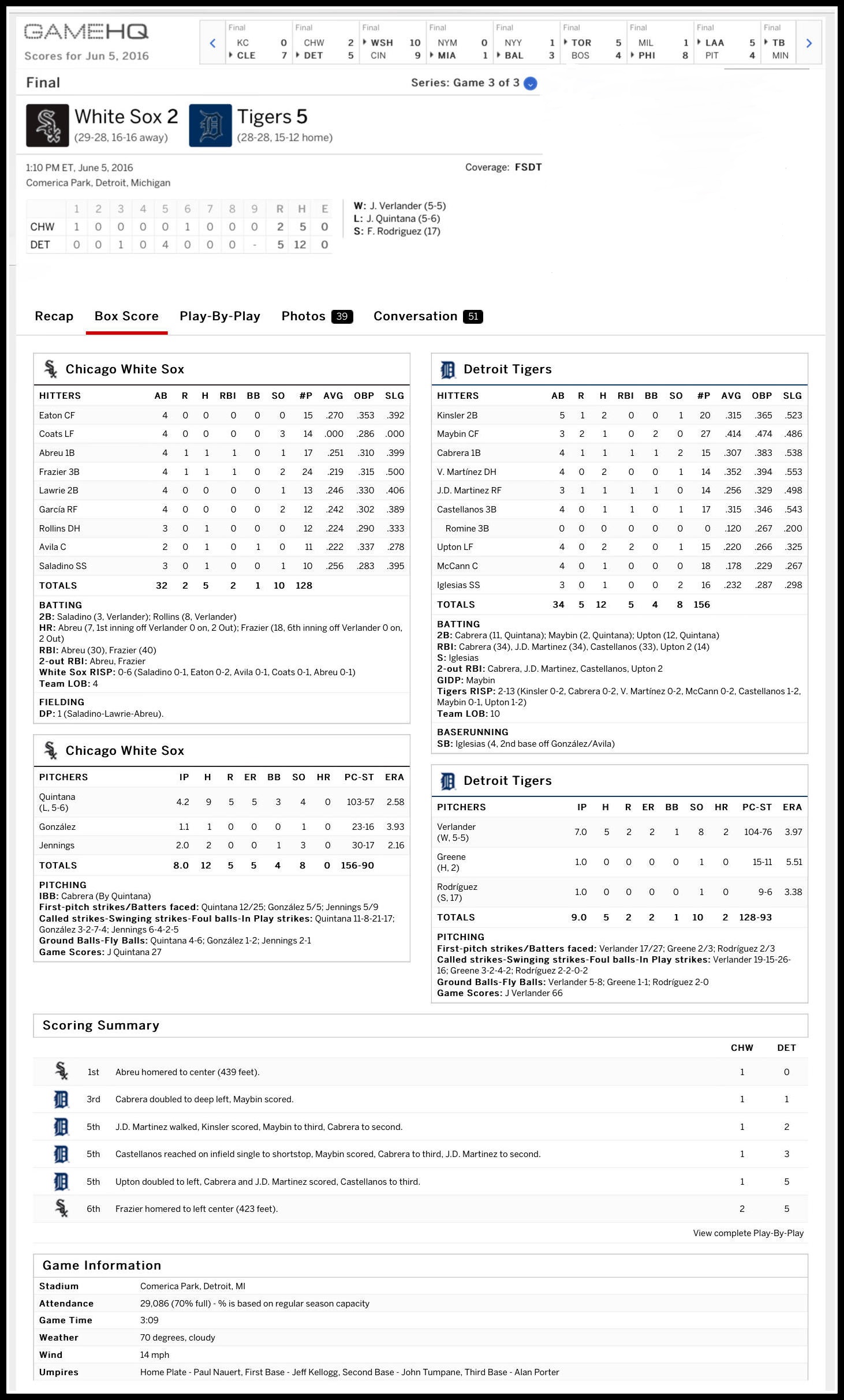