My daughter bought a couple tickets to a Sunday afternoon game and invited me along. We took the Pace shuttle from Woodfield, ate lunch at McDonald’s across the street, and got to our seats about half an hour before game time. 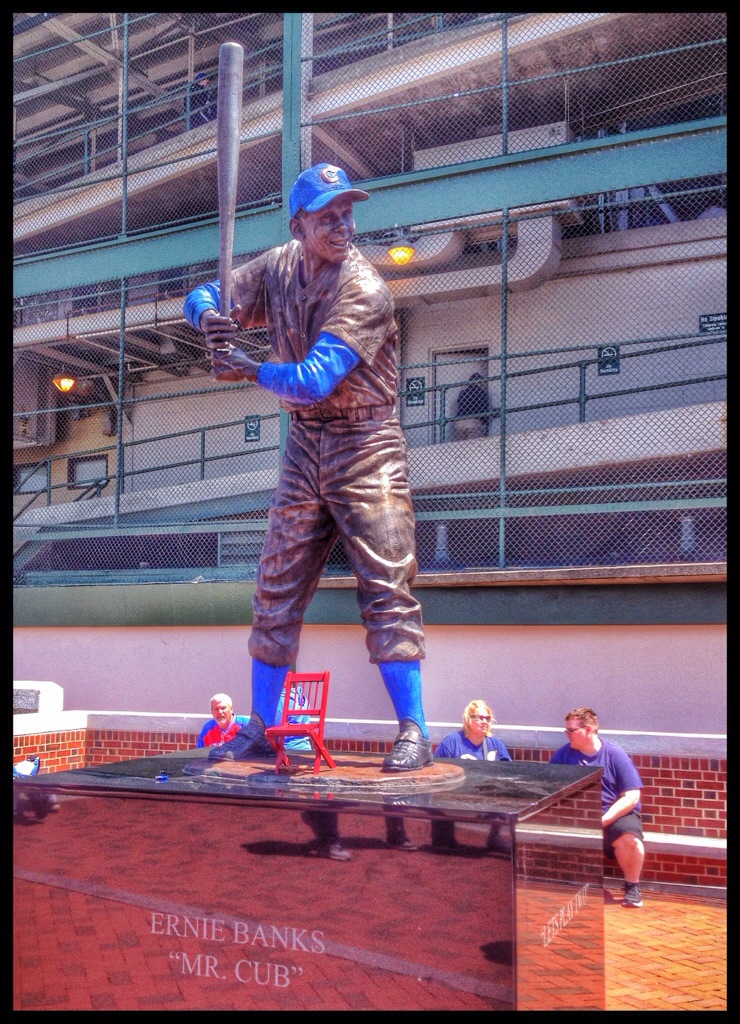 (Here’s an example of how iPhone panoramas handle moving vehicles.) 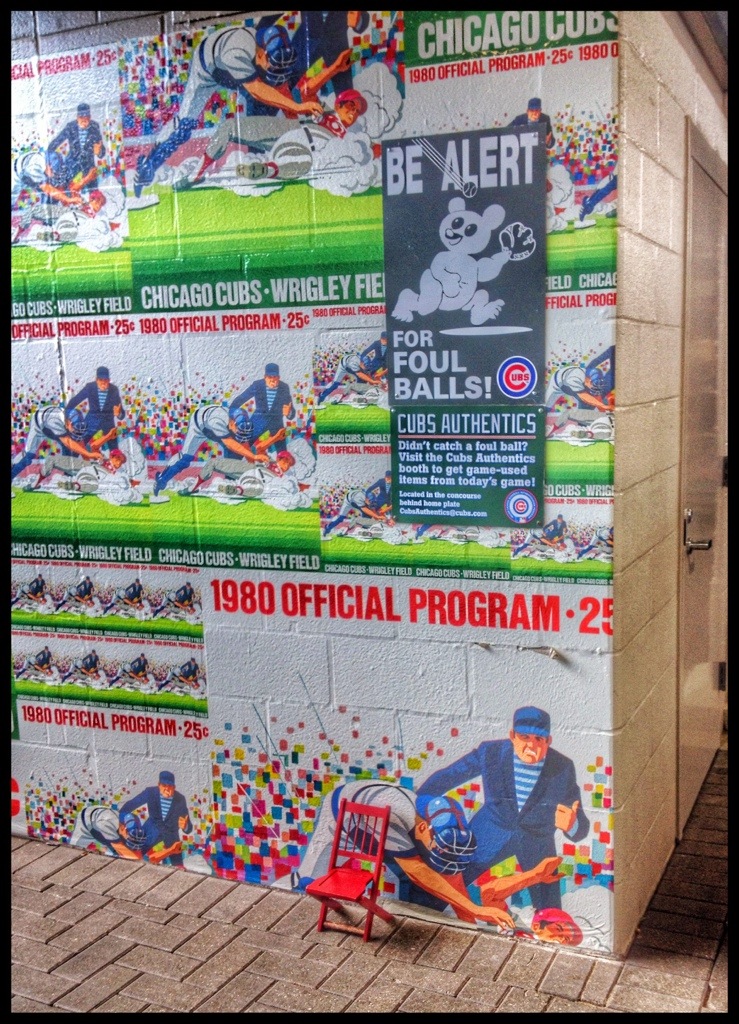 Our seats were way down the left field stands, almost to the outfield fence, but they were still pretty good. Our seats weren’t far from the left field foul pole, so I walked down shortly before the game started to get this shot. I actually had to wait a few seconds for a dad who was there with his young daughter to take his own photo of the chair. 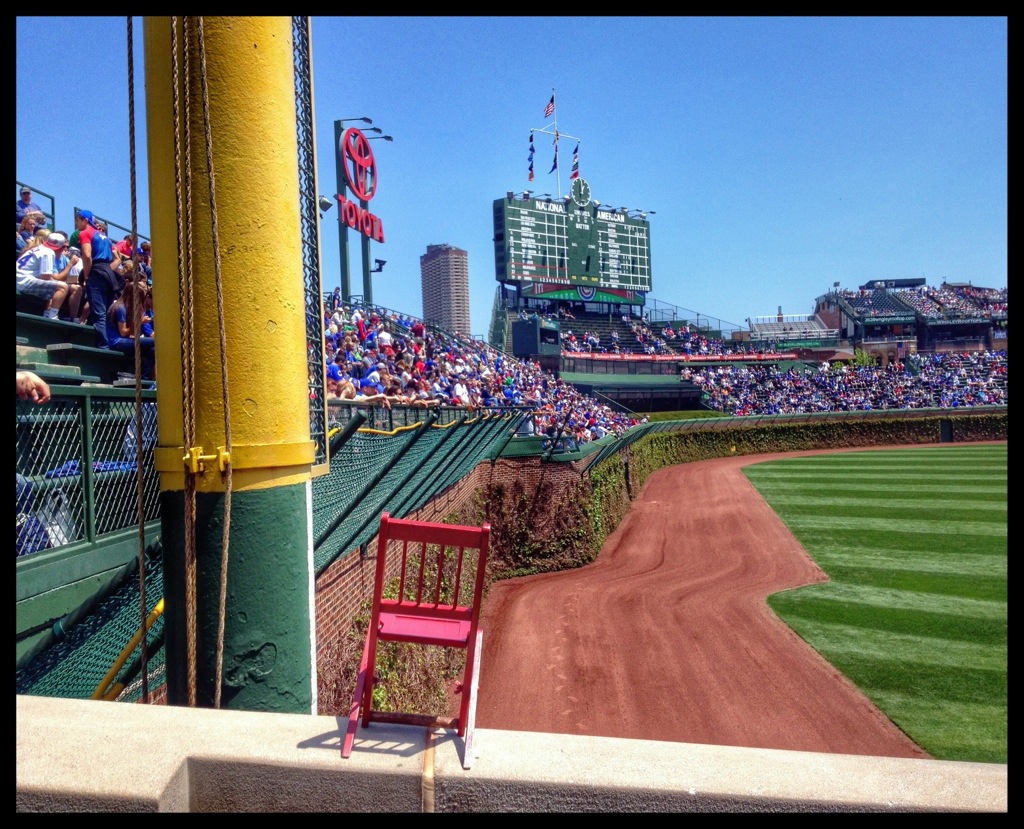 About half an hour before game time, I asked an usher if I could take a photo of the chair on the dugout. He asked to see my ticket. I politely replied that my seats were “way up there.” He looked at the chair and said, “No more than 60 seconds.” I don’t think I took that long. 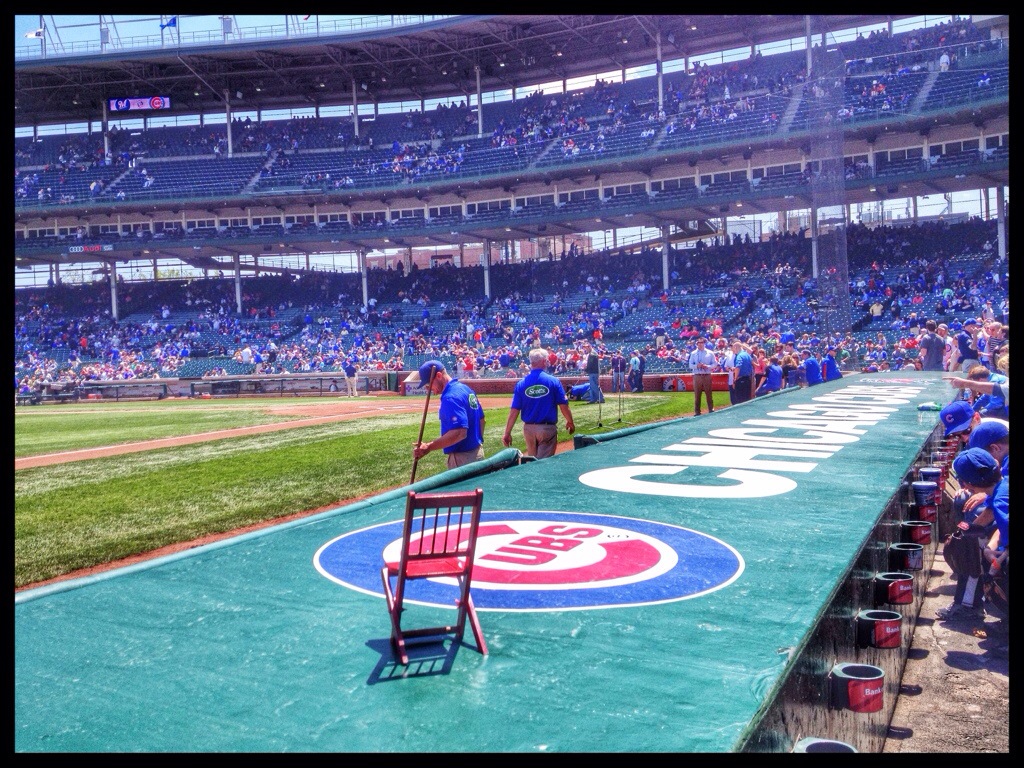 Here was the view from our seats. 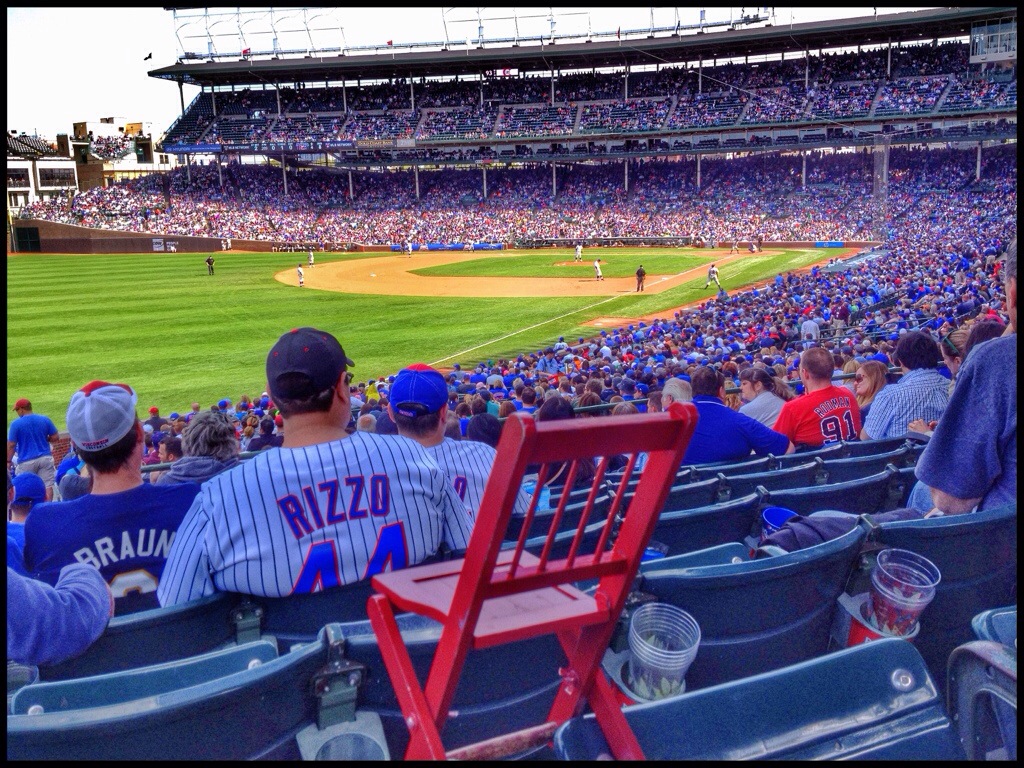 We had great views of the two home runs the Cubs hit, one by Castillo and one by Olt. Travis Wood walked the bases loaded in the first inning, but escaped unscored-upon and didn’t give up a hit or a run until the fifth when Rickie Weeks hit a two-run homer.

The weather could not have been more pleasant. 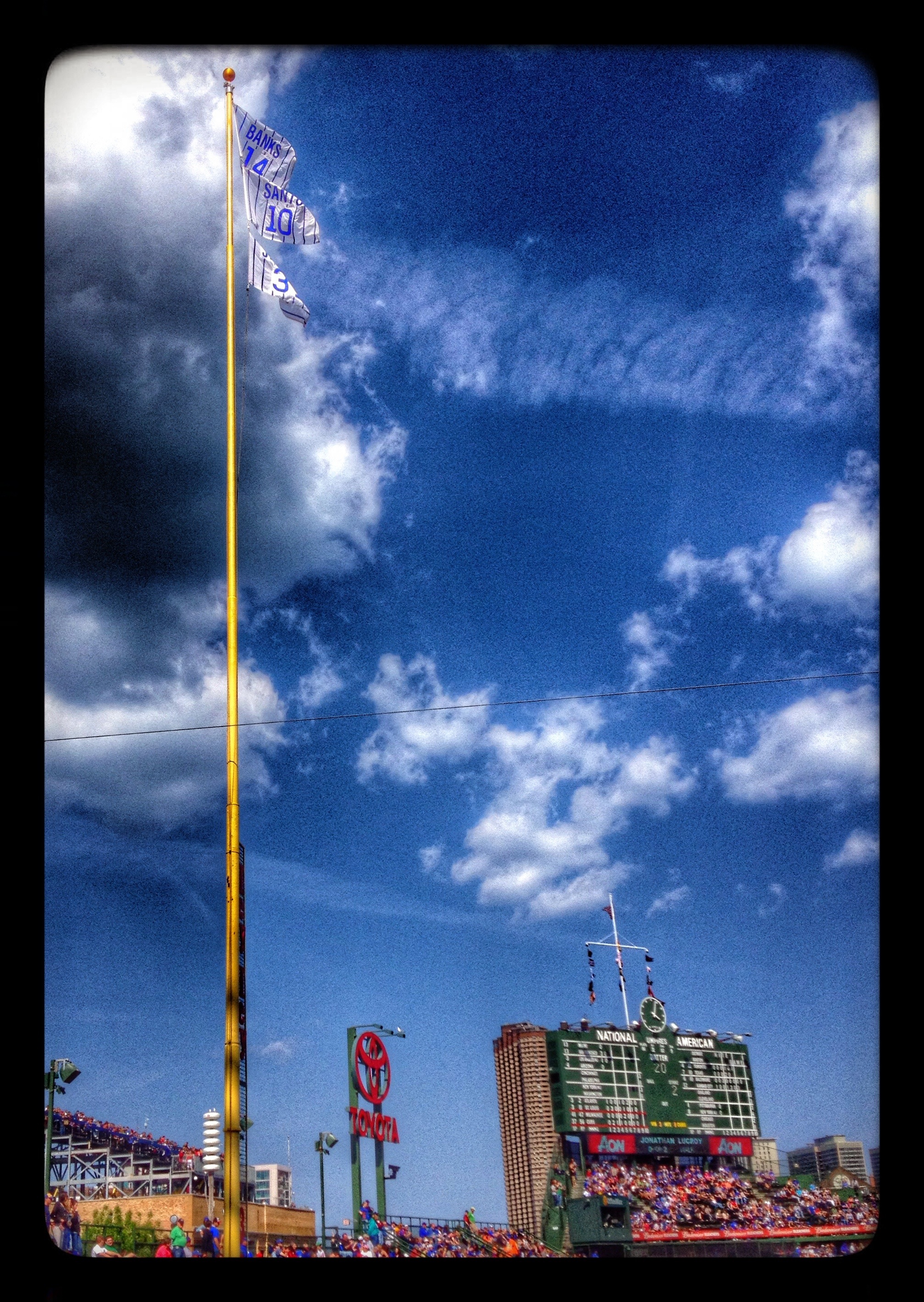 In the sixth inning, I climbed to the upper deck and took some photos. 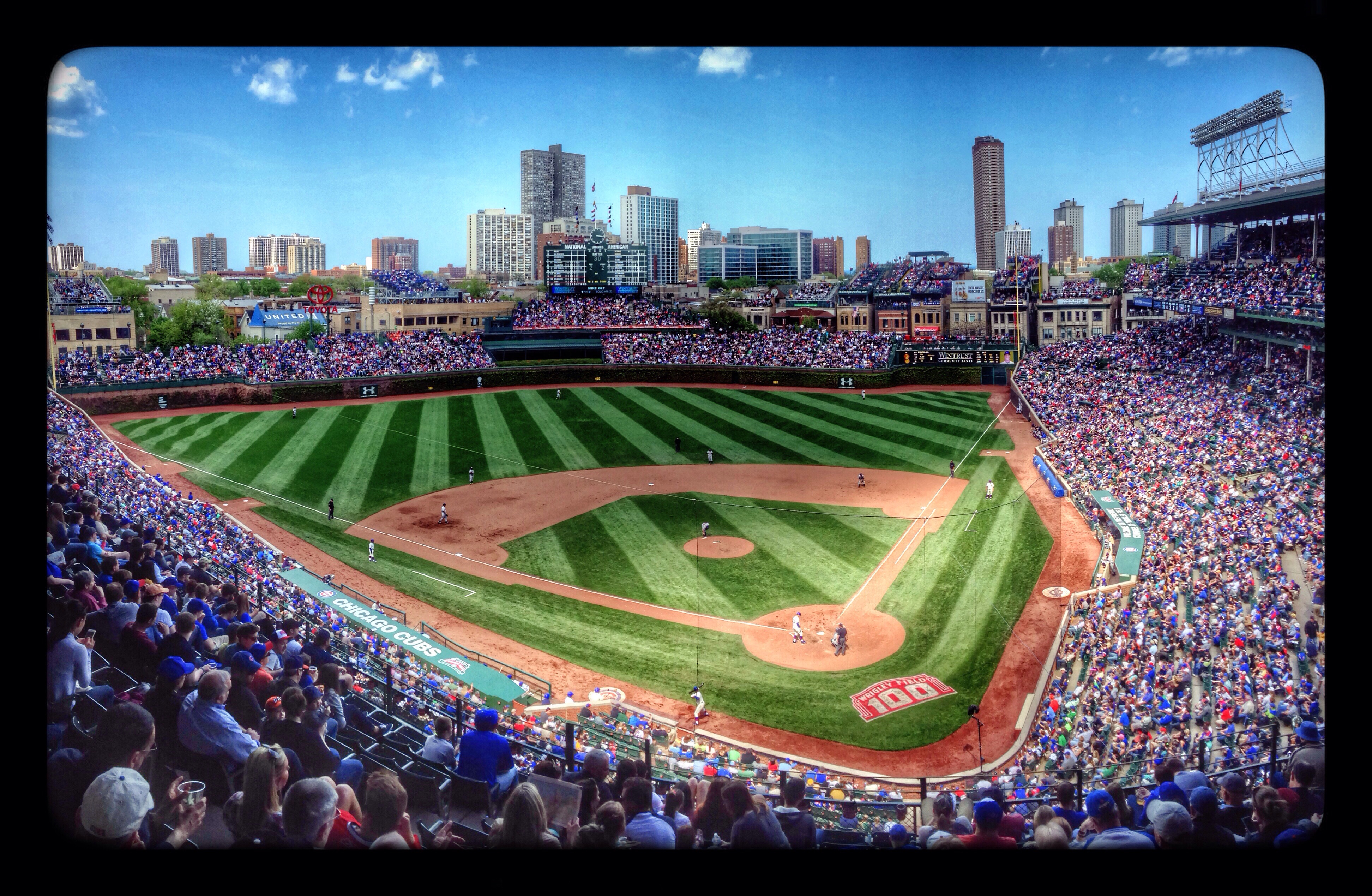 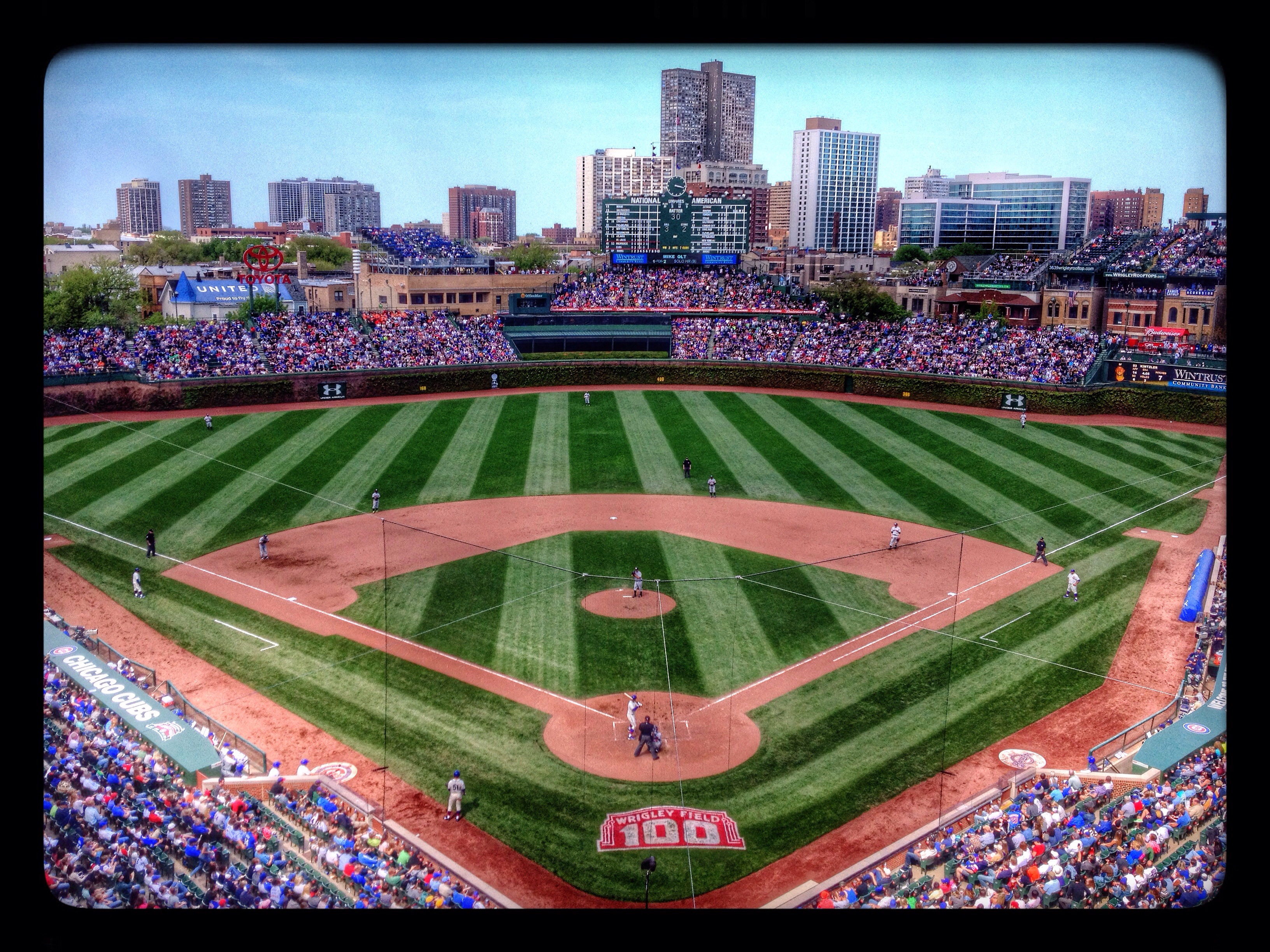 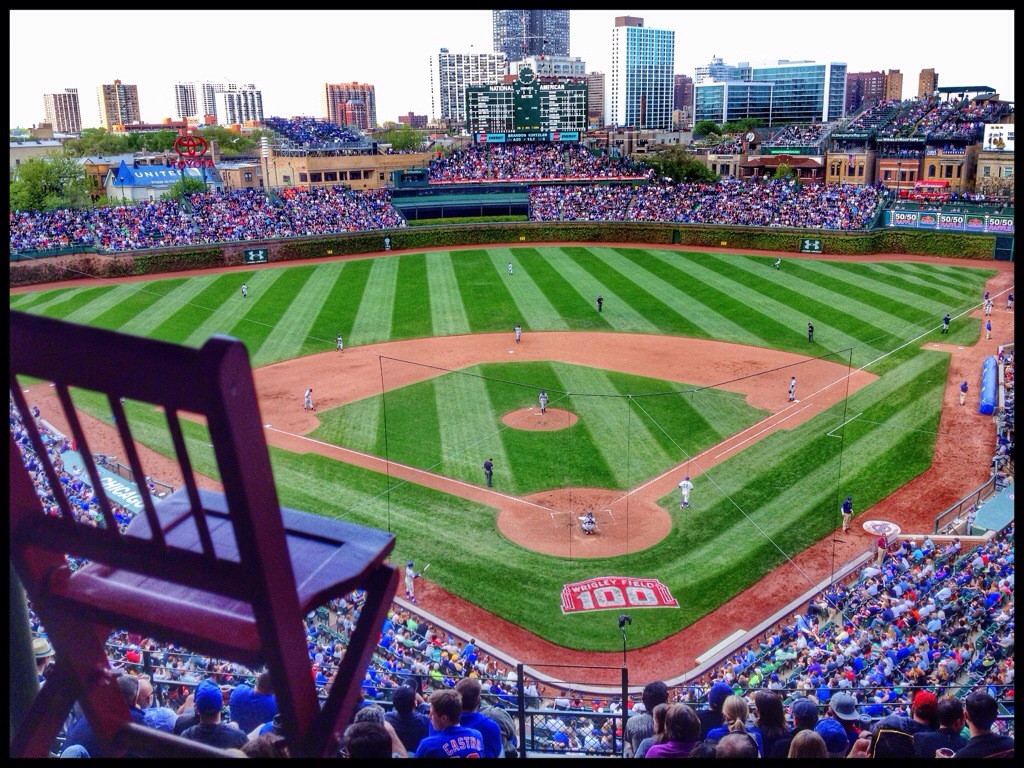 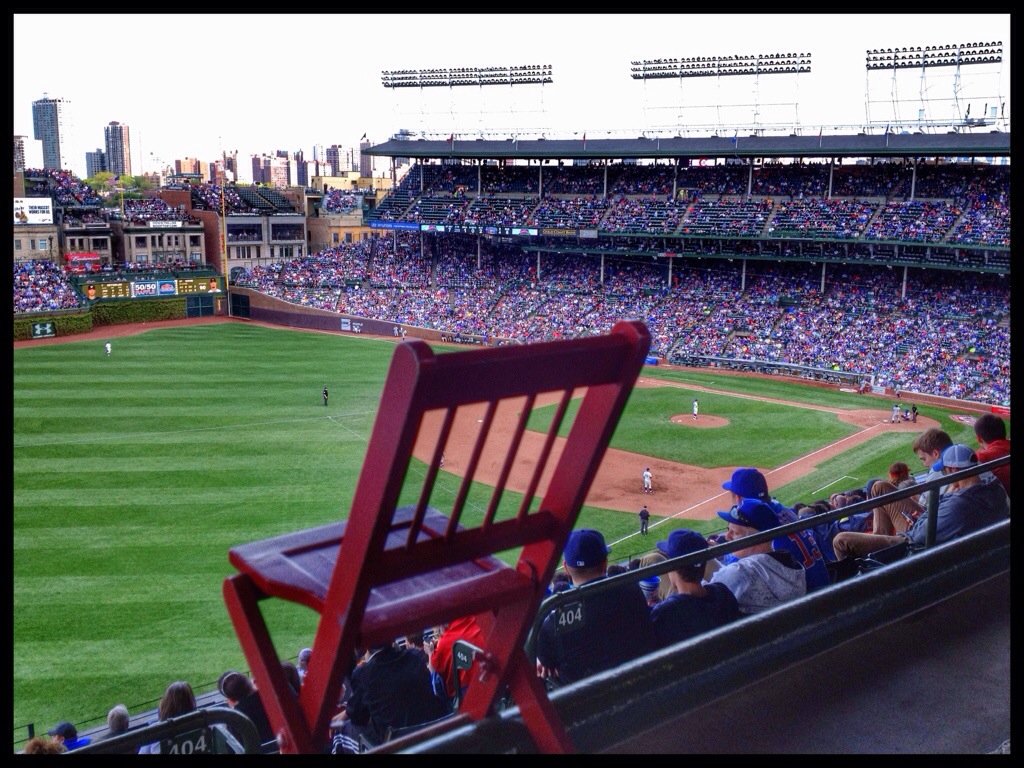 I got to see my first umpire replay review in the seventh when Junior Lake was ruled out on an attempted steal of second after initially being called safe. You can see the umpires huddling here with Lake awaiting his fate on second. 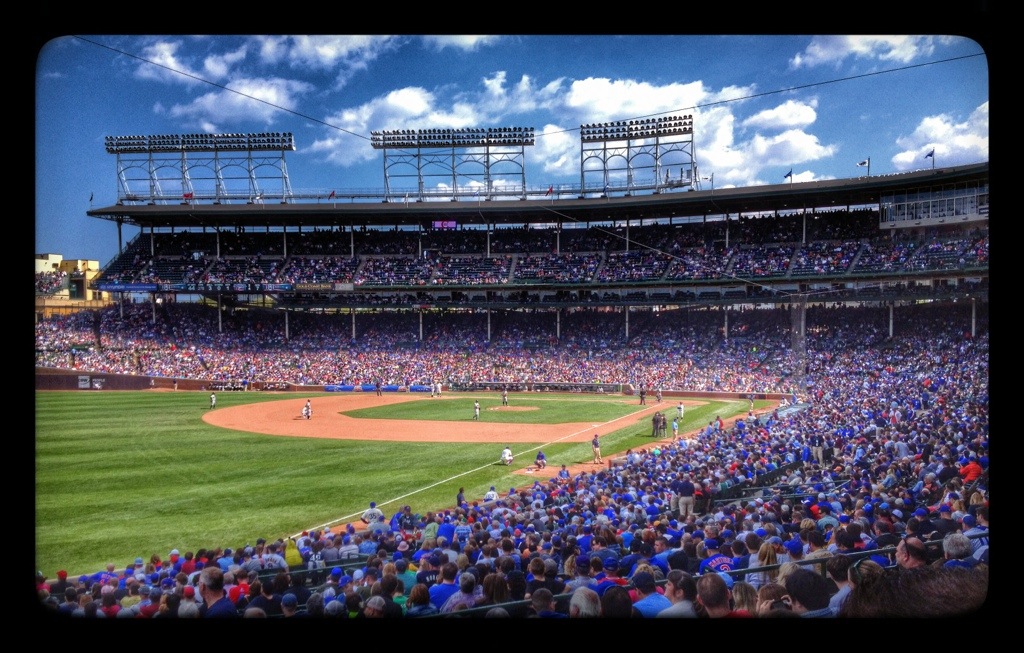 Here Hector Rondon strikes out Khris Davis to end the game with Ryan Braun on second. The Cubs won 4-2. 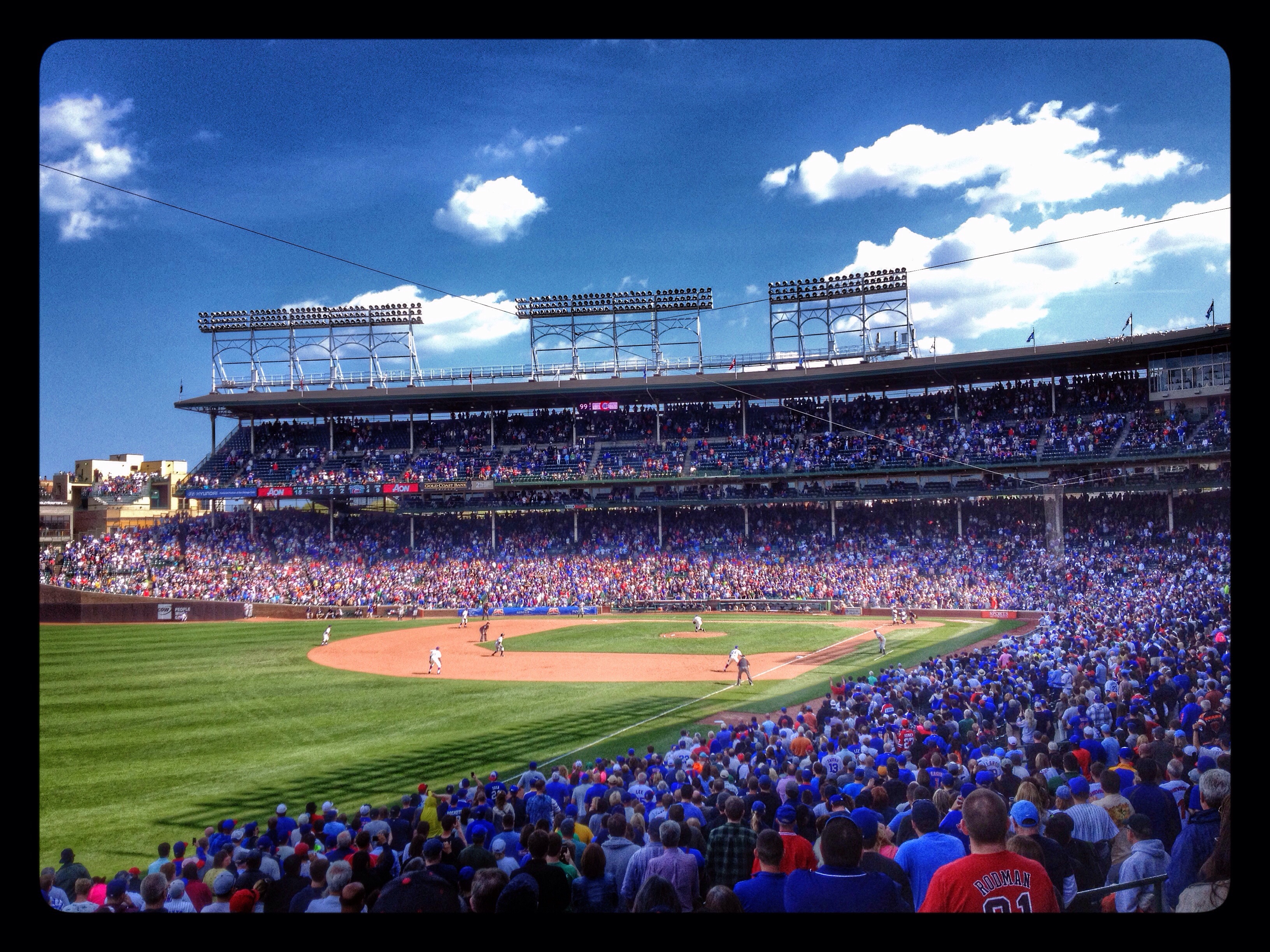 We stayed in our seats until the “W” went up on the scorecard. 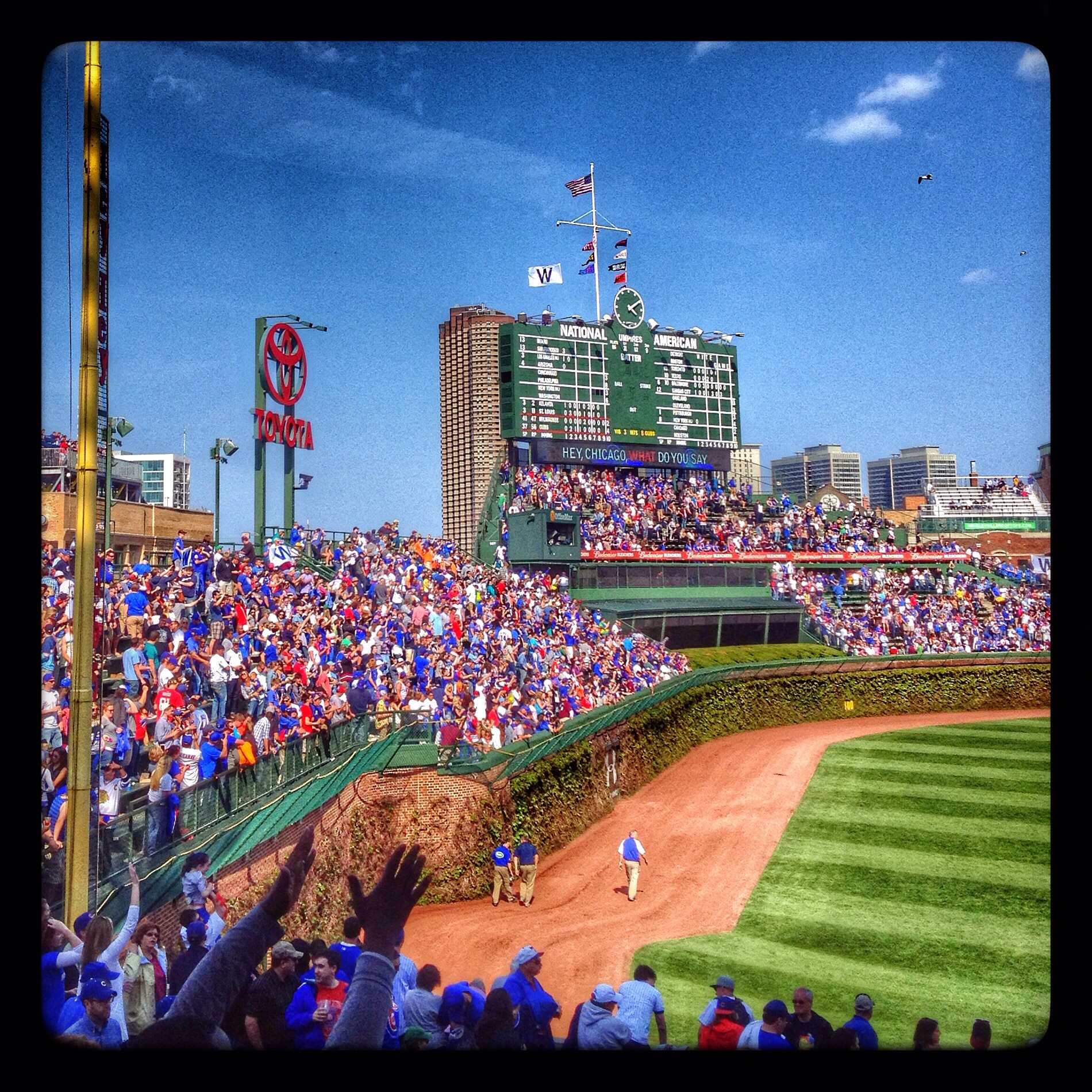 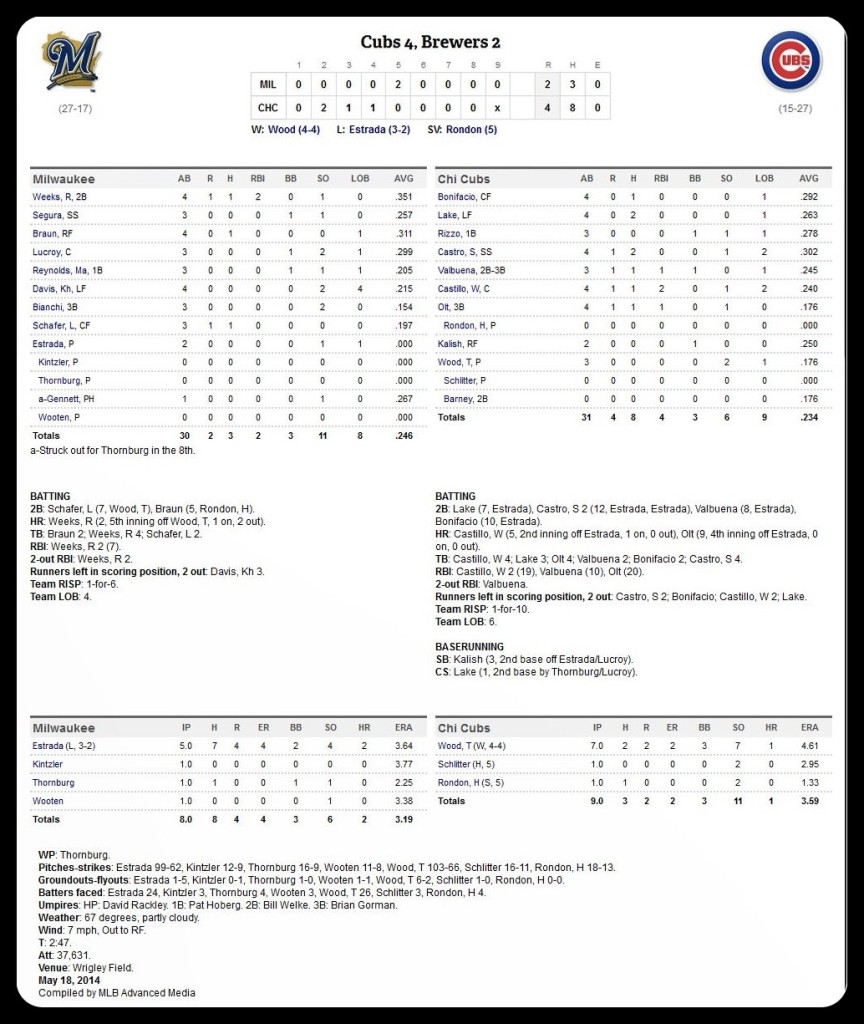 It was a long day — we left home at 9:45 a.m. and didn’t get back until 6:30 p.m. And we switched seats twice, once because a large man sat next to my daughter and crowded her into sitting sideways and once because the guy behind us spilled a full cup of beer on my seat (fortunately this happened when I was walking around). But we had fun hanging out together and enjoying the weather and the crowd and we saw a great game.