Somebody has figured out how to make icicles and fuse them together to make walls and towers and other formations. The company looks for places— Minnesota, Utah, Alberta—where it stays cold long enough to build a castle. This year, the baseball field in Dillon, Colorado, was chosen. That castle opened in late December. When I saw that tickets were only on sale until Valentines Day, we jumped and bought two for 6:00 pm on the Sunday before.

I stalked the parking spots by the Ice Castles until I found a space right by the entrance to the castles. The sun was still out, and we had an hour to wait. I walked around the outside and took photos. 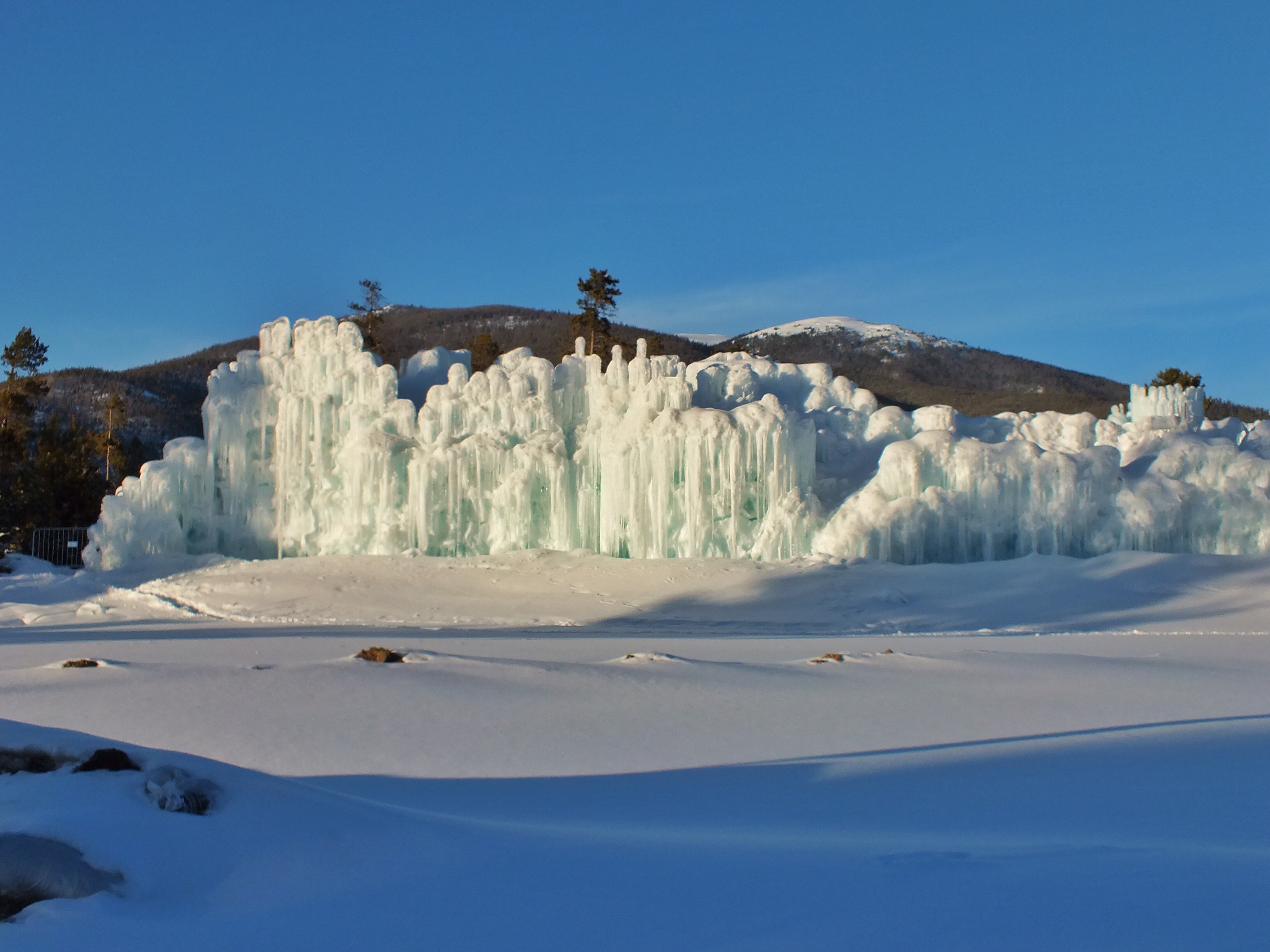 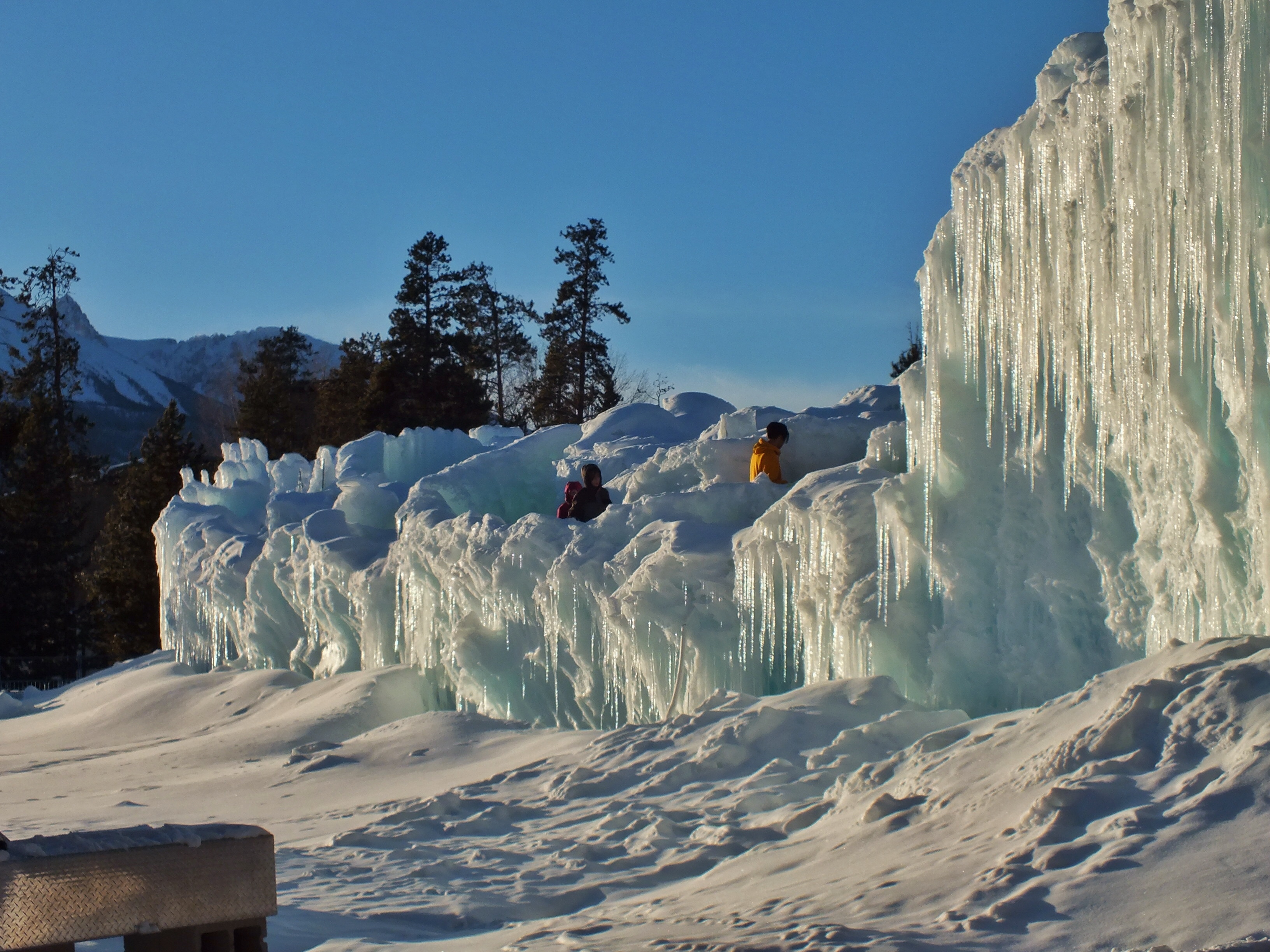 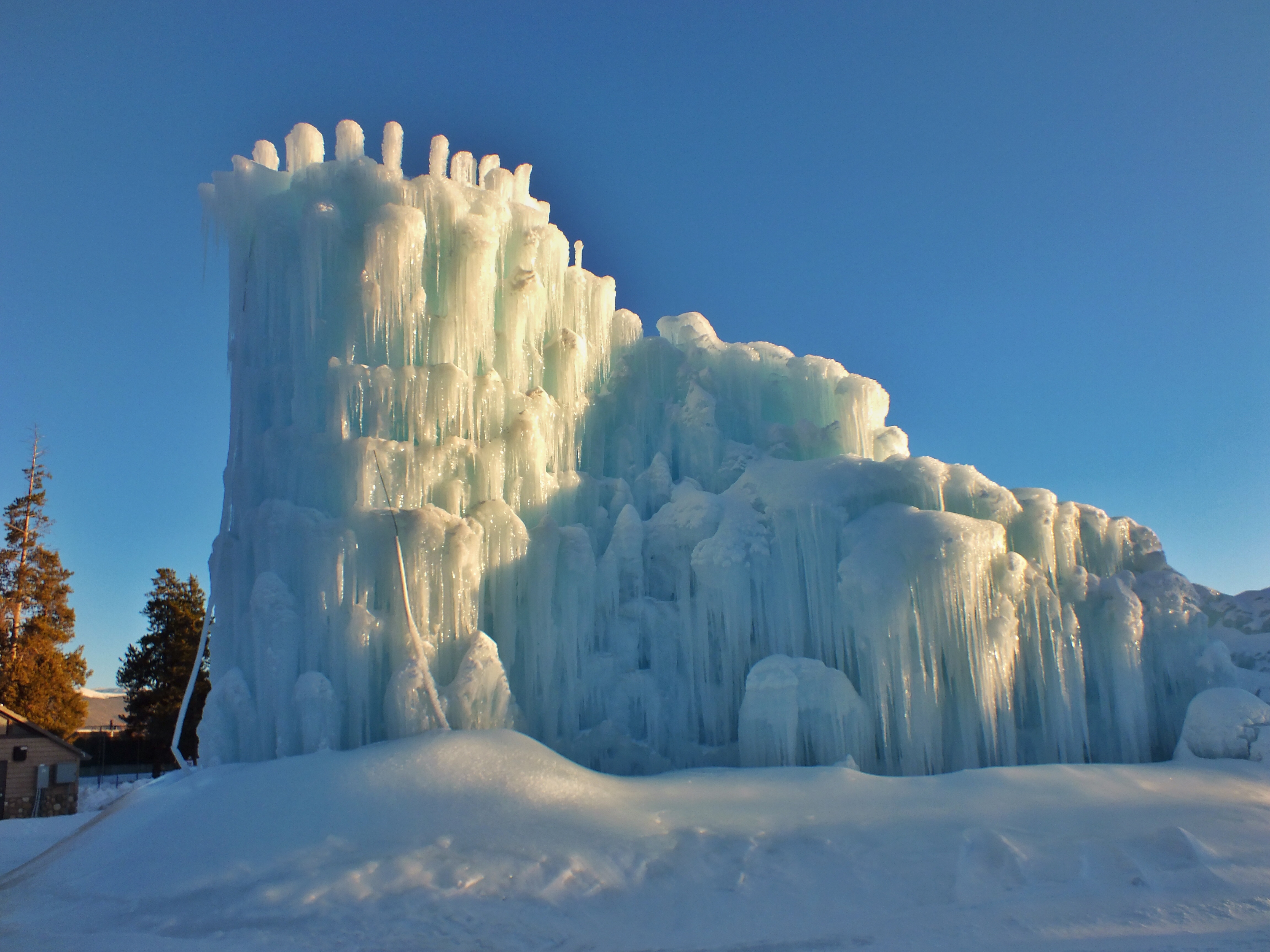 We sat in our car until 5:45, watching the line of people waiting to get in. It seemed like a lot more people than could comfortably fit. When we got in the line, however, it moved faster than we expected. When we got inside shortly after 6:00, it was dark and the lights built into the walls were casting a colorful glow.

I’ll let the pictures tell most of the story. It was near impossible to take photos without people in them, so I didn’t try. I had my point-and-shoot camera and held it as steady as I could. The photos came out better than I expected. 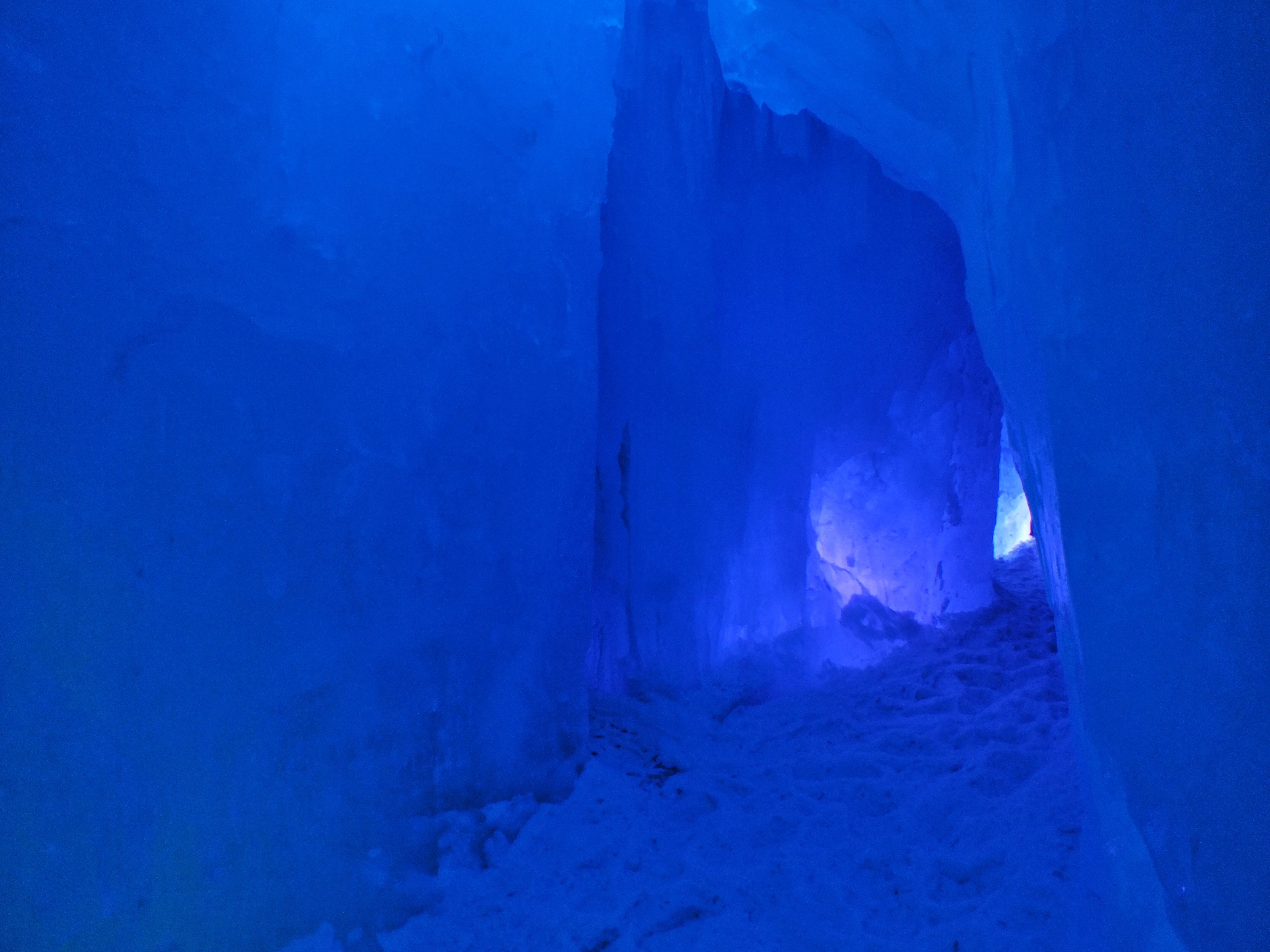 The fountain, such as it was. 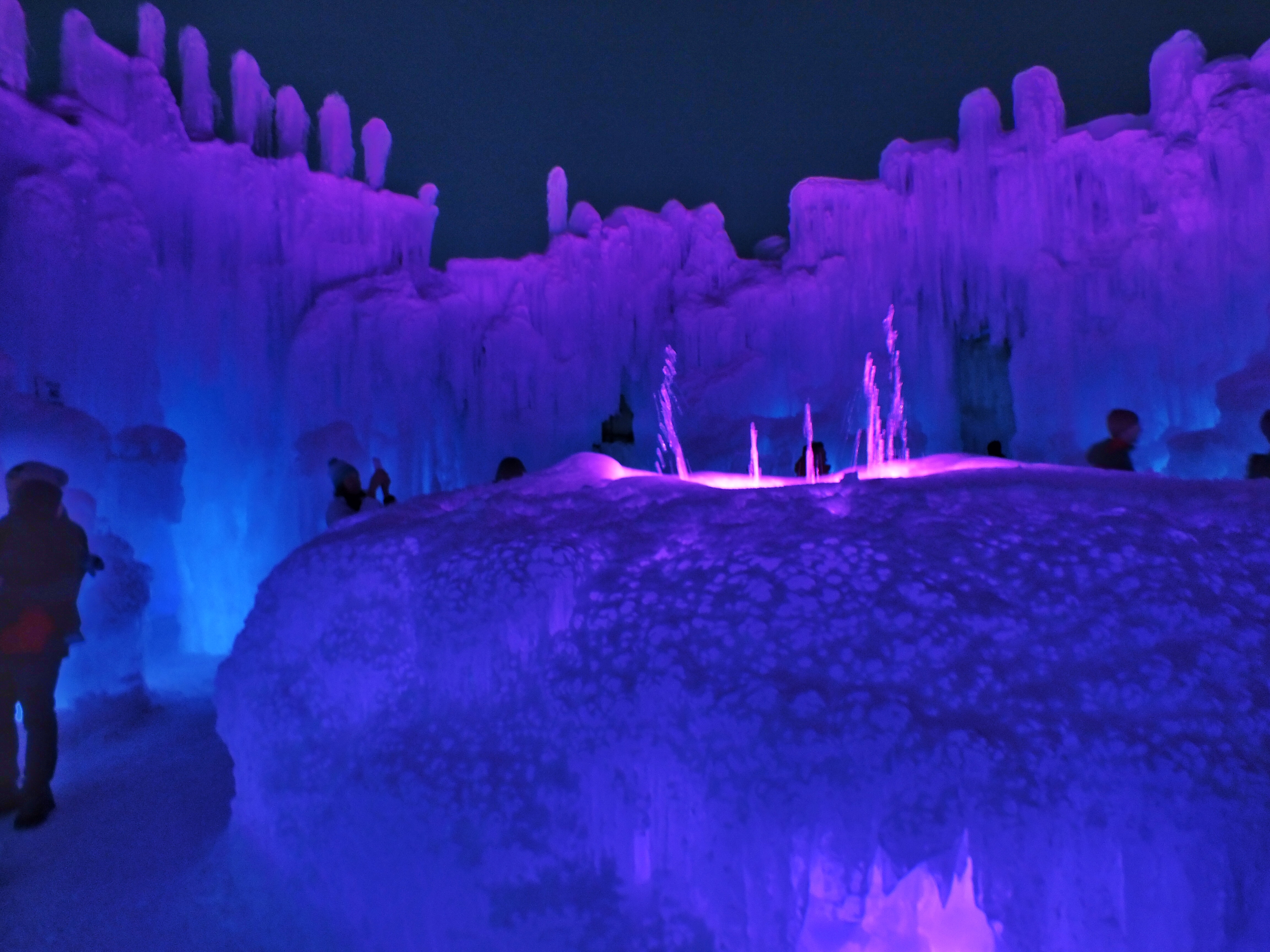 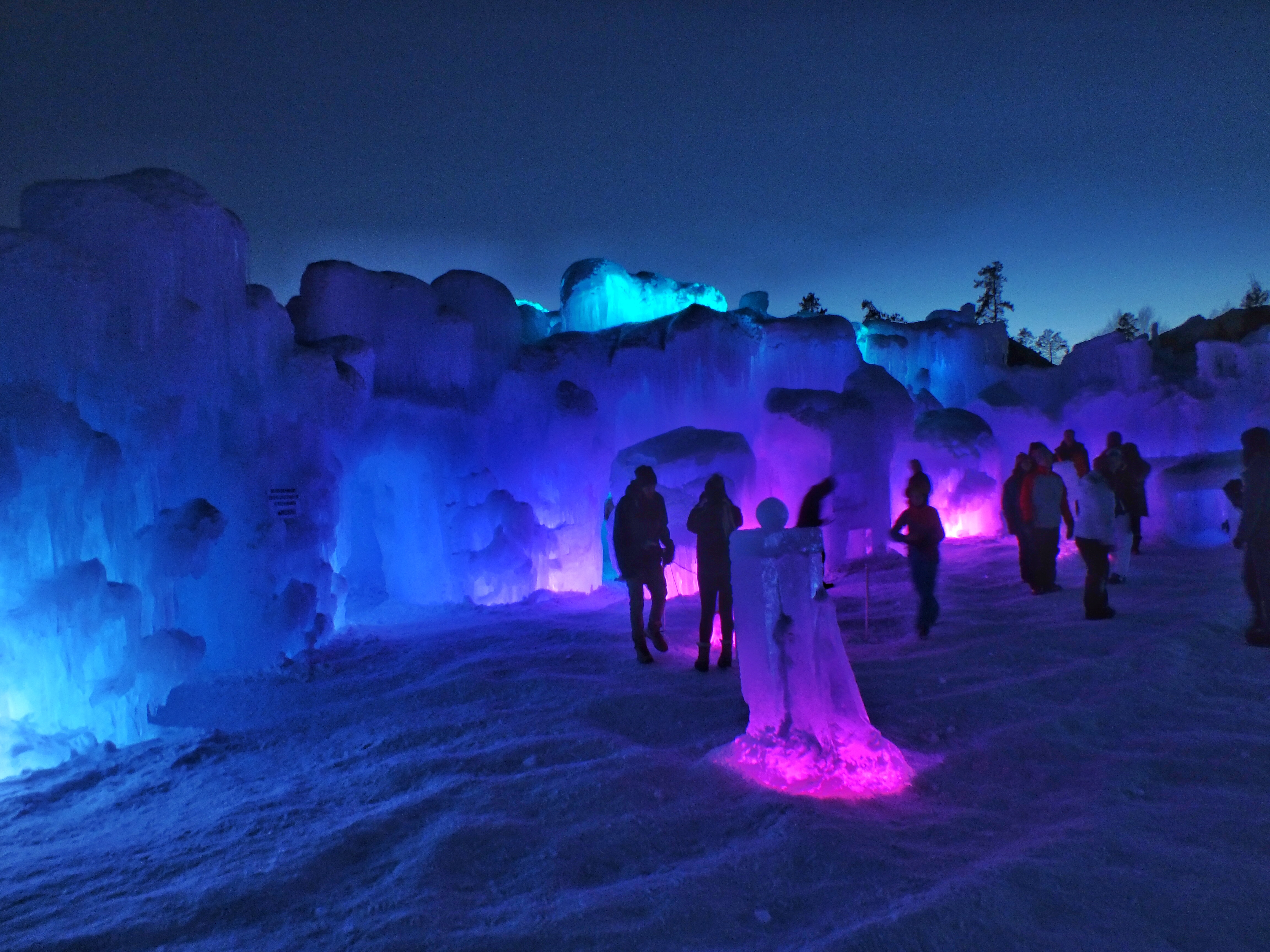 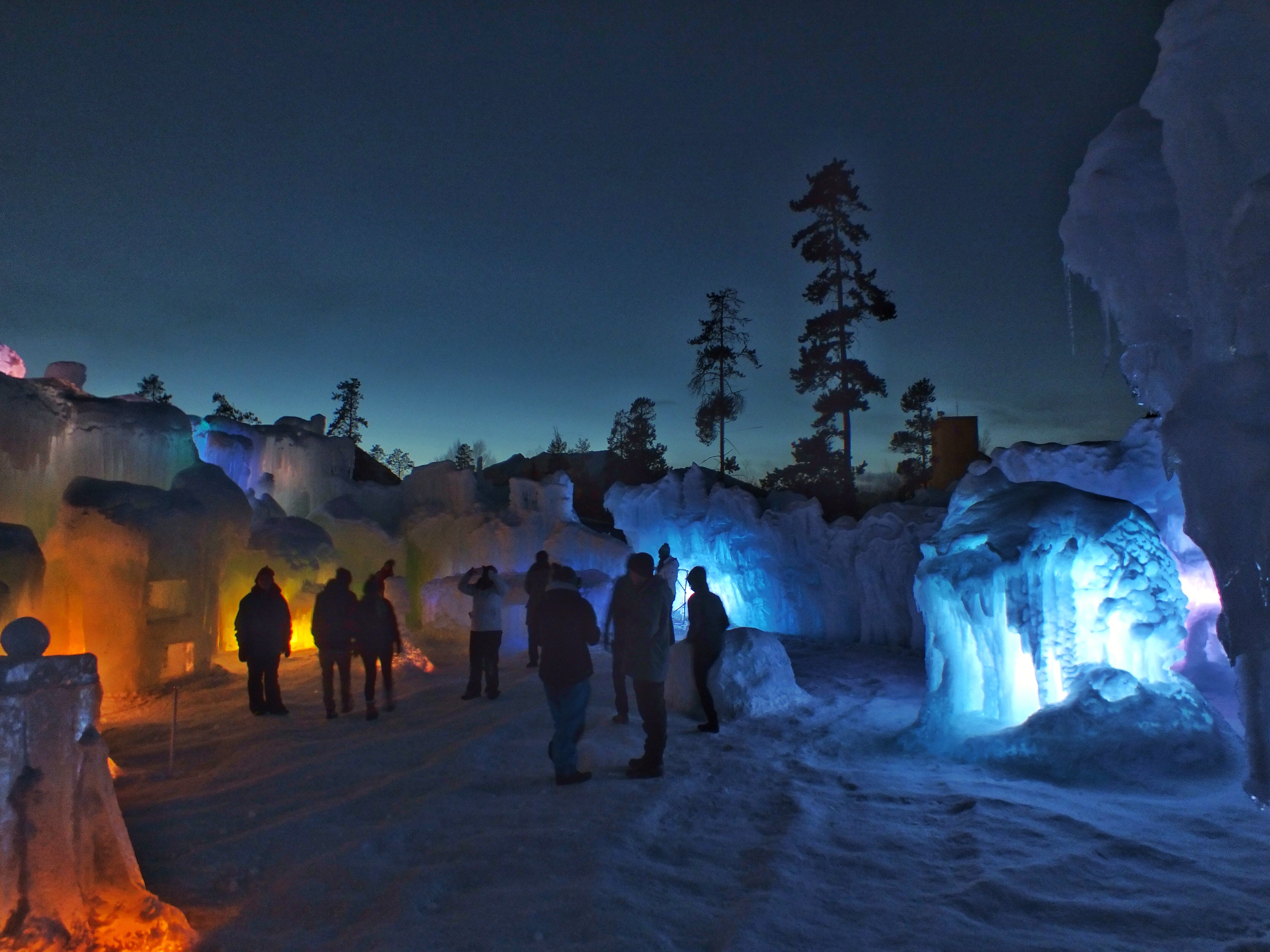 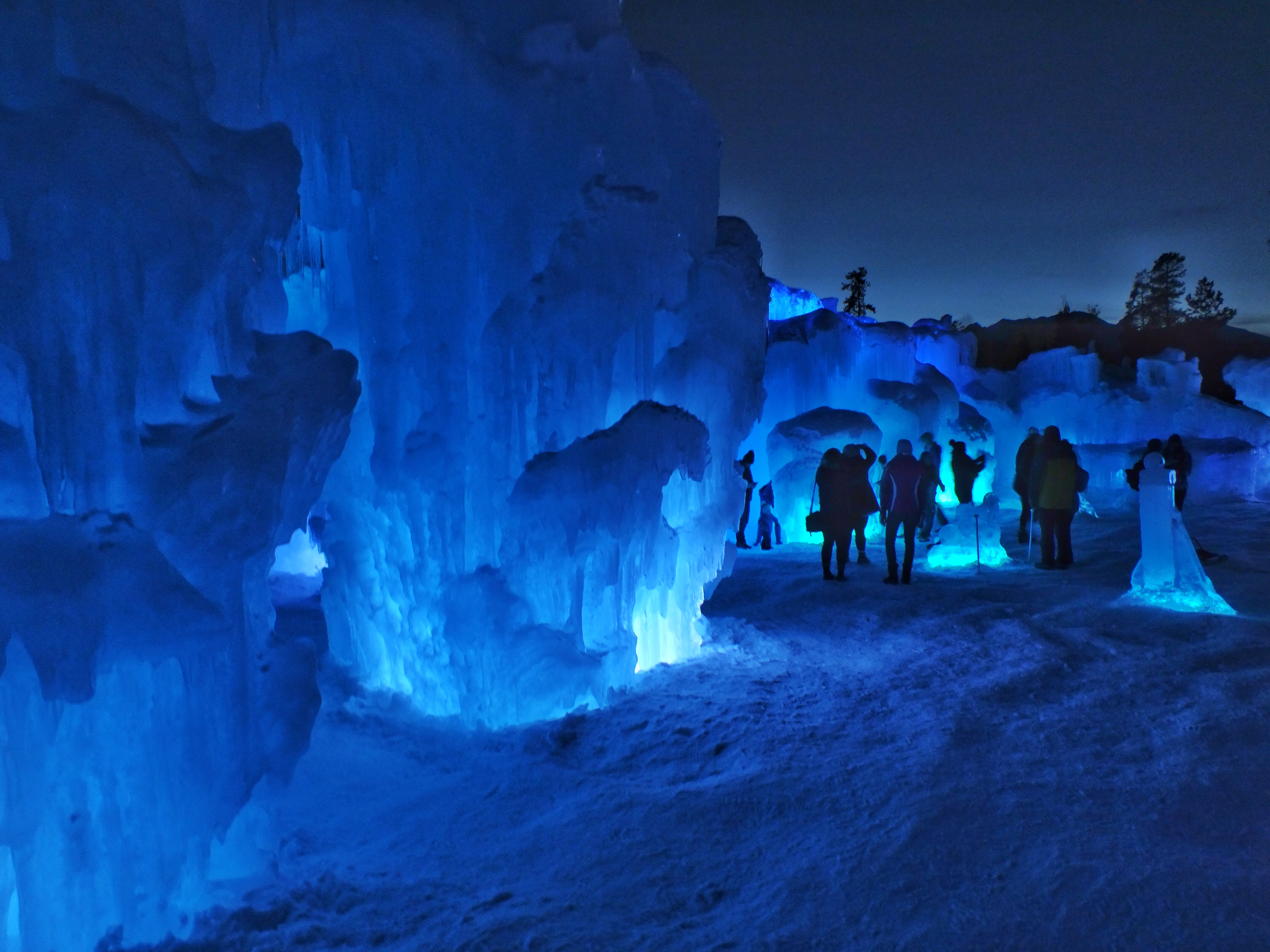 The colors in this section of wall  (below) were more varied and changed more frequently than those other places. We were in line behind a young couple who were discussing how they didn’t want to give their expensive camera to just anyone. I volunteered to take their photo in exchange for them taking ours. They jumped on the offer. 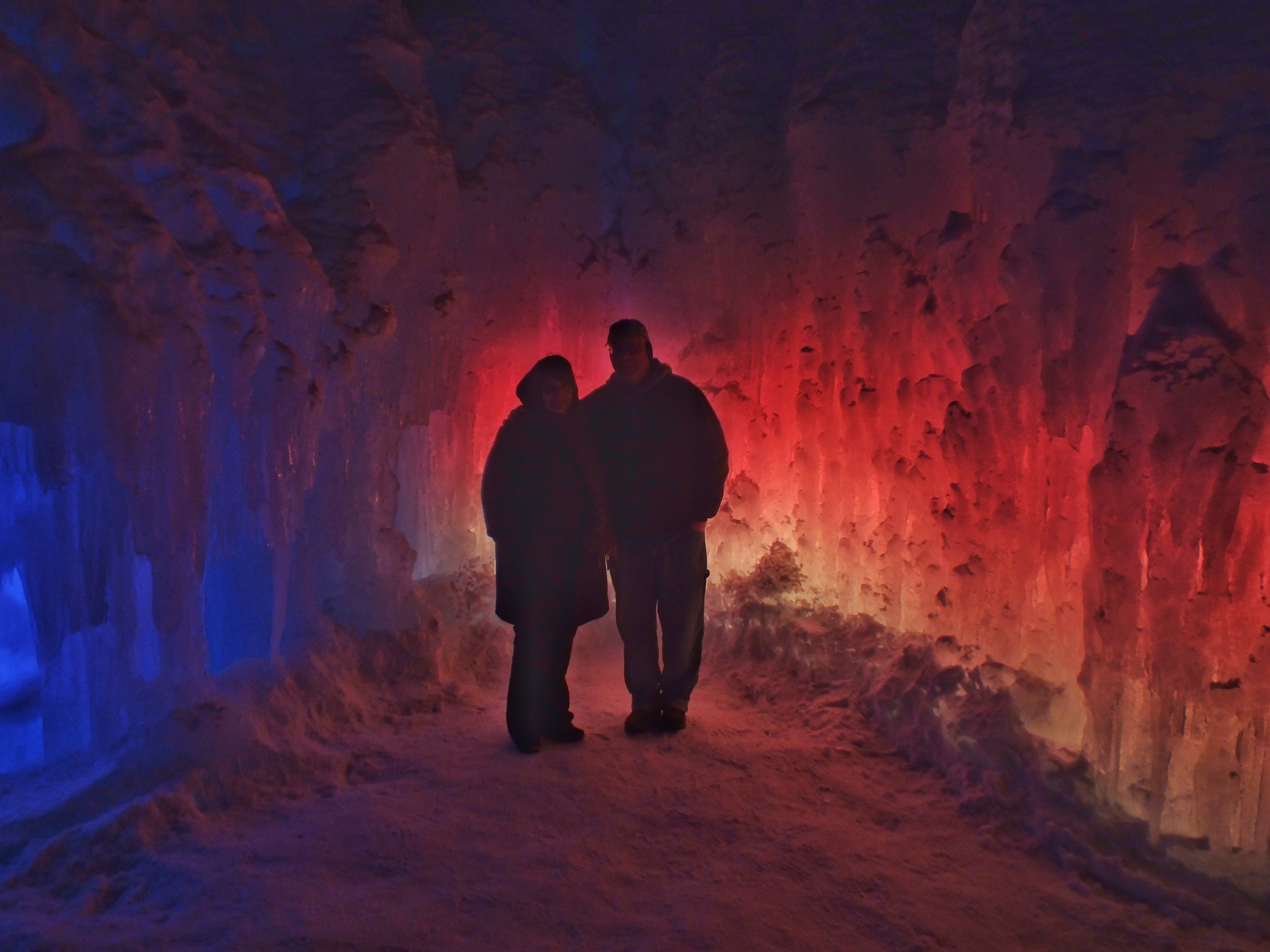 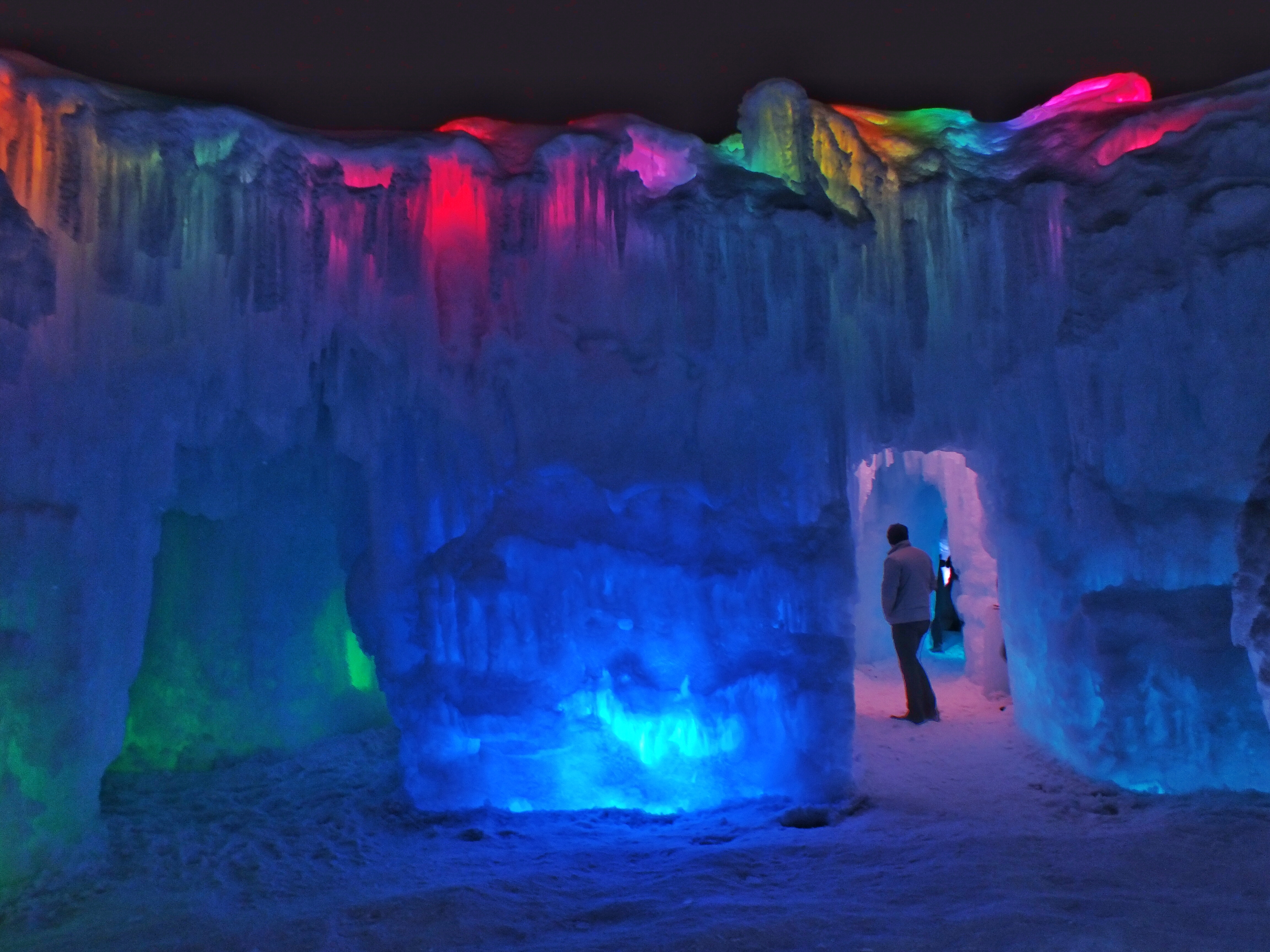 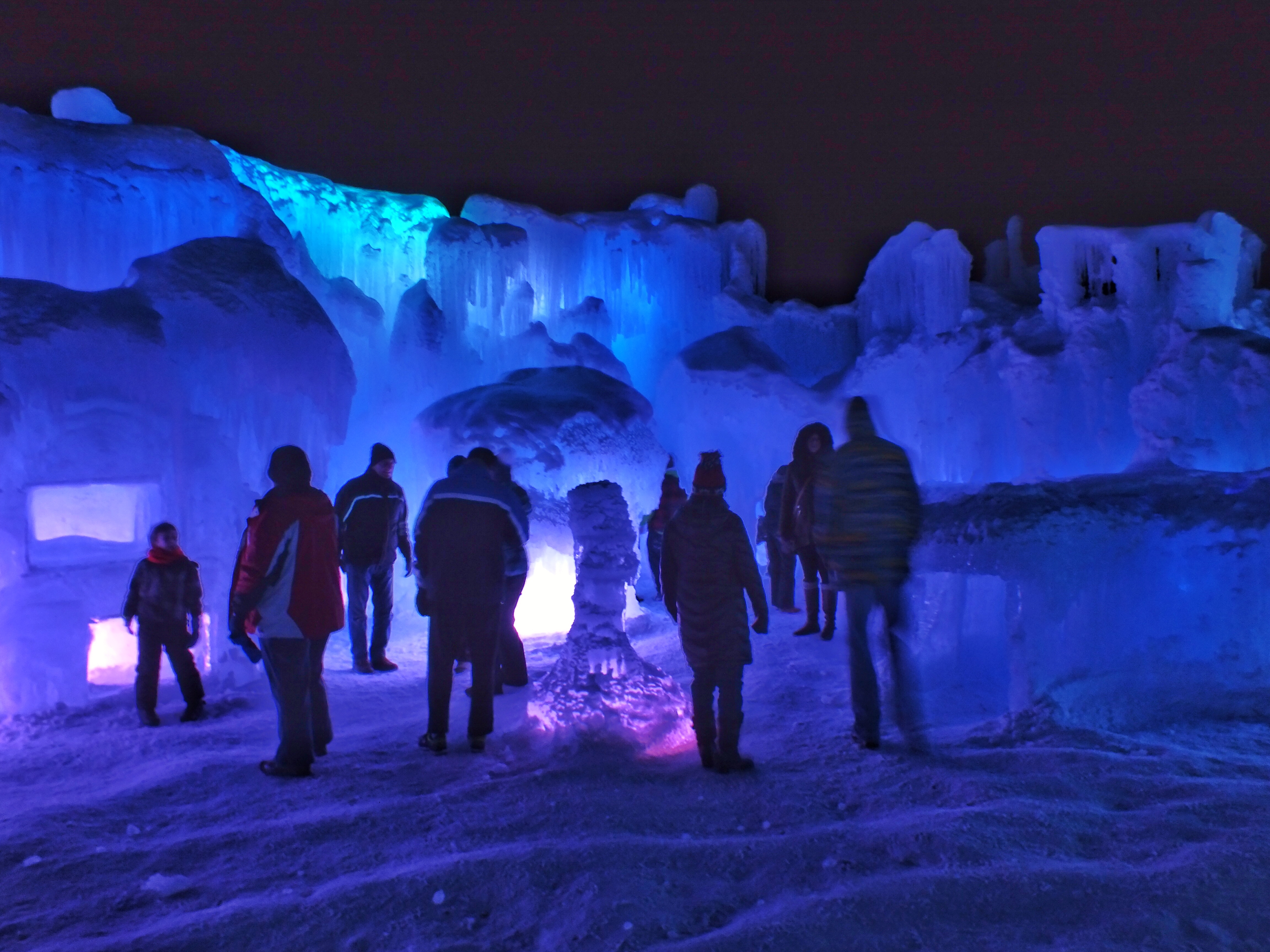 I decided I wanted the whole experience, so I got in line for the ice slide. It took about 15 minutes to get to the top. I was given a small sheet of plastic to sit on, but quickly found out that positioning my body in the entrance to the slide, arranging to sit on the plastic, and holding my phone so that I could take a video was a challenge. I started down the slide with only half my behind on the piece. I got about a third of the way down and came to a halt. I managed to reposition myself and restart my camera before things got too embarrassing. Even so, it was fun and worth doing once.