Never In My Life Have I Needed a Bathroom So Badly

It had taken us an hour and 50 minutes to get to Dillon from our house. We figured it would take a little longer to get home. For the entire 40 miles from Idaho Springs to Dillon, eastbound traffic had been stop and go (or as they say in Colorado—slow and go).

We left Dillon at 7:00. I had to use the bathroom, but I didn’t. I don’t have a good explanation for why I didn’t. Perhaps it was because I had a toothache and a headache that were battling for supremacy in my skull, and I just wanted to be home. Besides, my wife had applied for a job and had to take a test on Excel as part of the process. She’d been studying diligently all weekend—another reason we wouldn’t have gone to Dillon if we hadn’t already bought tickets—and still needed to take the actual test when we got home.

As I was pulling onto I-70, I saw a mobile sign that said, “Slow traffic. Expect delays, 90 minutes to Idaho Springs.” I sincerely hoped that was left over from earlier in the day. For the first three or four miles, traffic was moving pretty well. But then we stopped. For the next two hours, we stopped and crawled and stopped and crawled. 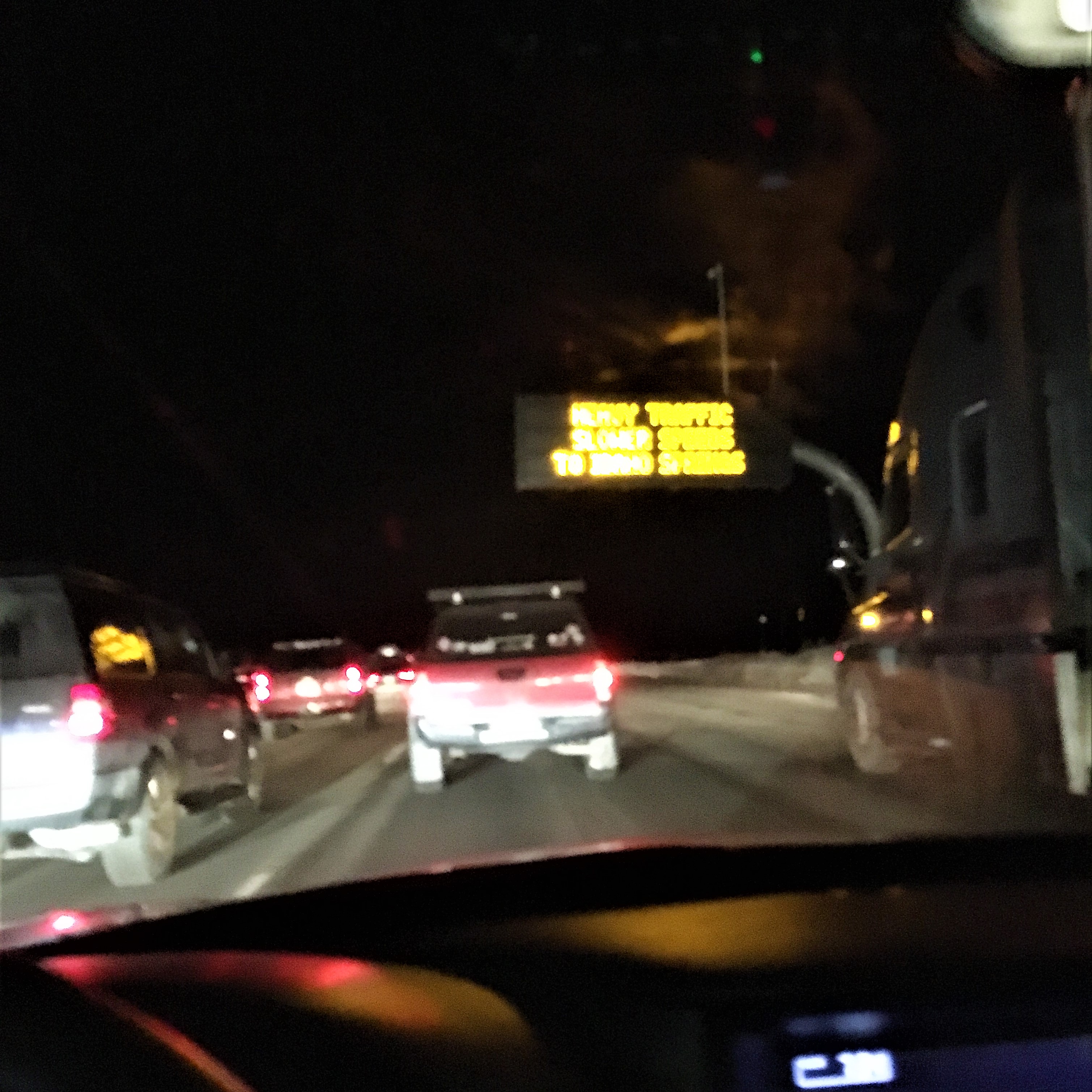 It was cold at 9,000 feet, and we needed to thaw out after walking through the Ice Castles for an hour. We had the heat on full blast. A lot of exhaust was coming in with the heat, and my headache was getting worse. I turned the fan to recirculation. Minutes later, the air began smelling like something was burning. I turned off the heat. The smell stopped.

I waited a few minutes and turned it back on. The smell started again. I turned it off. We tried not to think about it. I-70 along that stretch is narrow and winding with very little shoulder and high cement walls. It would be a terrible place to break down, especially in the midst of miles of bumper-to-bumper skiers in a hurry to get home.

When we were getting decidedly cold, I tried the heat one more time. Instant burning smell. I turned it off. We sat in silence. My tooth and head were throbbing. I was deeply regretting my decision not to stop in Dillon at a bathroom. We crawled along.

For the past hour, we’d been in the center lane behind a pickup with New Hampshire plates. He decided he wanted to be in the left lane. As he pulled over, we could see smoke coming from under his engine. He was overheating.

The traffic in our lane was moving faster for a moment and we pulled ahead of him. I turned on the heat. No smell. At least we could be warm in our misery. The left lane sped up, but we never saw that truck again.

Headache. Toothache. Stop. Go. Stop. Go. I desperately needed a bathroom. My wife was stressed about the test she had to take. It truly felt like a night that would never end. We were only 20 or 30 miles from Dillon and the trip had already taken longer than our entire ride out. 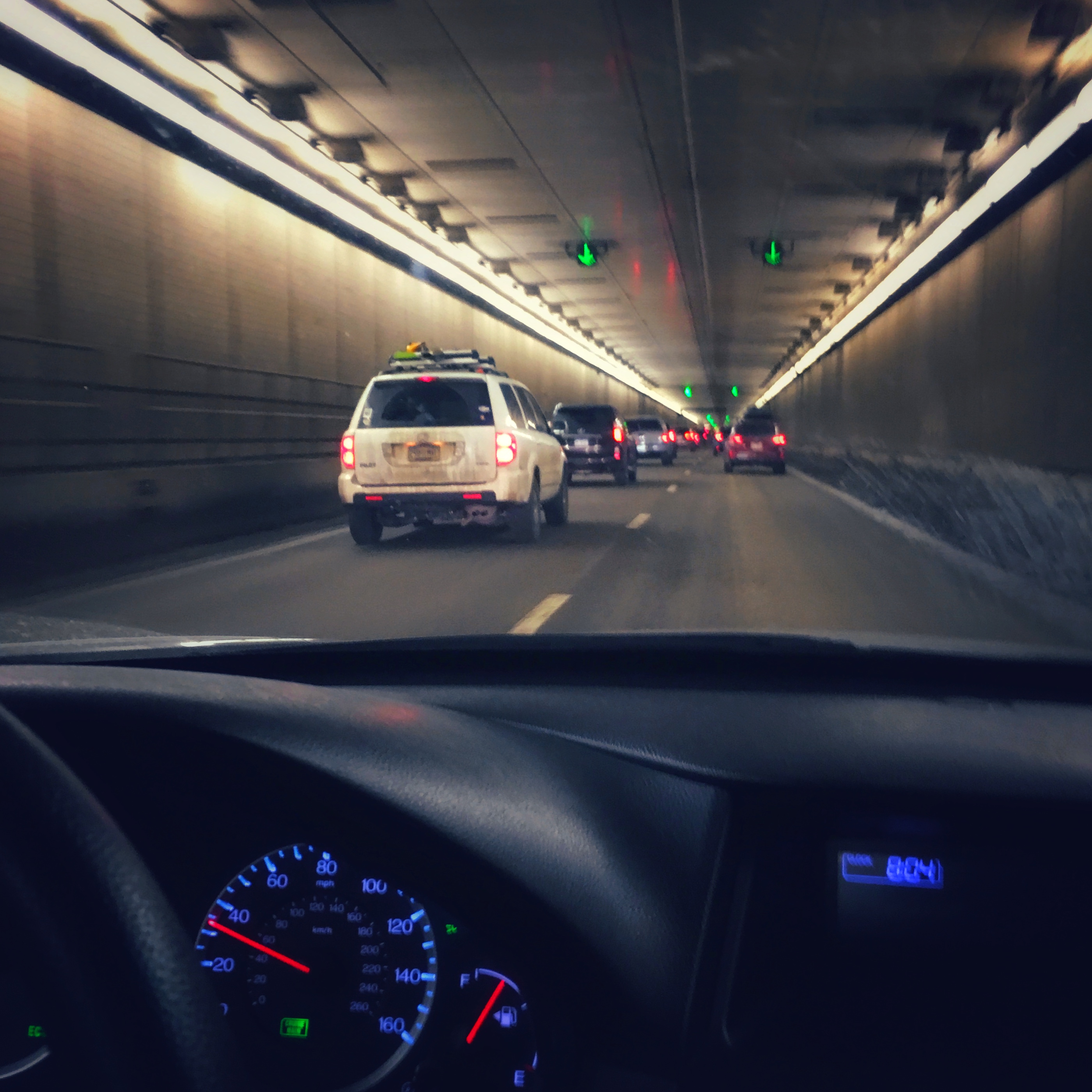 We eventually got to Idaho Springs. Traffic thinned out for some reason, but the road was still busy. Every couple of miles or so, things would jam up for a couple hundred yards and then open up again. It was very dark and the road was twisty with some steep slopes. I guess this explains why so many of the drivers were riding their brakes constantly. This just caused more backups because it was impossible to tell, when their brake lights went on, if they were braking to stop or just using their brake to control their speed. The speed limit was 65, but some of these people were going closer to 40.

Finally things opened up and I was making good time. I didn’t see any bathrooms, but I figured we’d be near Denver soon, and I’d be saved.

That’s when I saw another mobile sign that said, “Accident 20 miles ahead. Expect delays.” Great. Still, we kept moving. I even began thinking it might not be that bad.

Wrong. After we’d gone 15 of those 20 miles, we stopped. For the next hour we averaged precisely 5 MPH. We saw one guy who must have been facing a crisis similar to mine. He pulled across two lanes of traffic onto the shoulder (there was one by this time), got out, walked around to the other side of the car, and just went. I was tempted. Oh, was I tempted.

We explored every possibility. Water bottle? Canister of moist towelettes? Park on the shoulder and hike up into the dark. It had gotten to the point where the pain in my bladder was worse that the pain in my tooth.

The three lanes of traffic merged into one. When we—finally—got to the accident site, we saw a red sports car upside down on the road and considerably smashed up. There were four or five emergency vehicles around, but nobody was anywhere near the car. It seems to me that, especially when traffic is that bad, that there would be a process in place to get the people out and get the wreck off the road. Apparently not.

We were almost to Denver by this time. We headed south on 470 for about 10 miles until I saw a sign for a gas station. Blessed relief. The rest of the trip was uneventful, except for my headache and toothache and my wife’s concern for her test. We finally got home at 11:15, four-and-a-half hours after we’d left Dillon.

I went to a dentist on Tuesday and got two root canals on the same tooth. It was another miserable day, but by Wednesday, I was feeling much better.