It doesn’t get a lot easier than this. Last night I saw a post on one of the Colorado birding pages I’ve subscribed to on Facebook. Somebody found a Mew Gull in second-summer plumage at Cherry Creek State Park. They posted several photos, linked to a map showing where exactly in the park it was seen, and mentioned that it was missing several tail feathers and, therefore, probably couldn’t go far.

I drove up on Sunday afternoon, parked by the marina, and looked for a flock of gulls. There were about 50 along the shore beneath the dam in the extreme northwest corner of the lake. 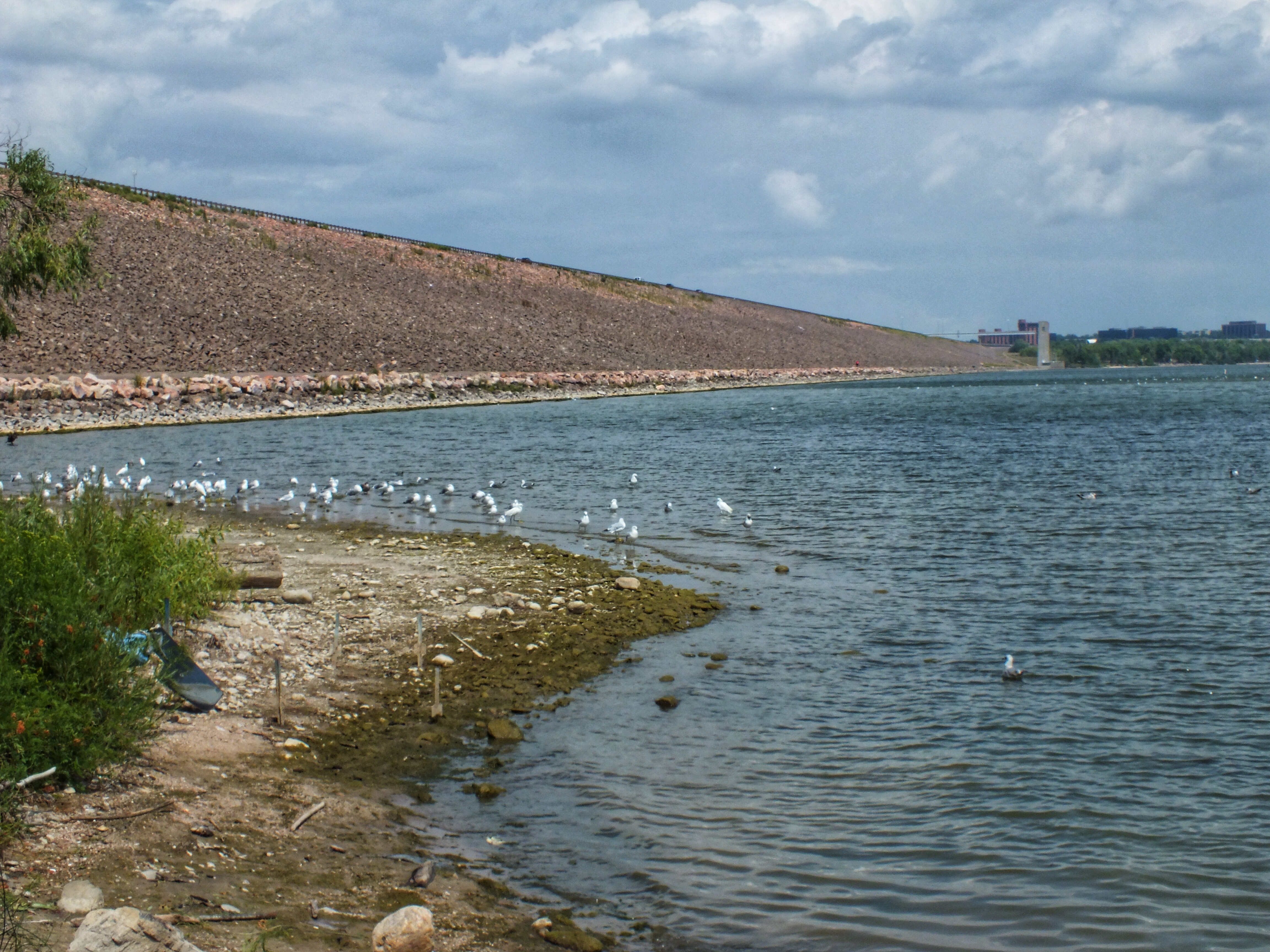 I was distracted for a bit by the several Snowy Egrets and Black-crowned Night-Herons that were wading with the gulls. But as soon as I started searching for the Mew Gull, I found it. It’s the bird closes to the camera in the photo above. It swam around the area, just off the beach for about 10 minutes while I watched, then headed in and stood in shallow water for about three minutes. It then went for another swim before coming back in and standing at the water’s edge about 10 feet from where I stood. 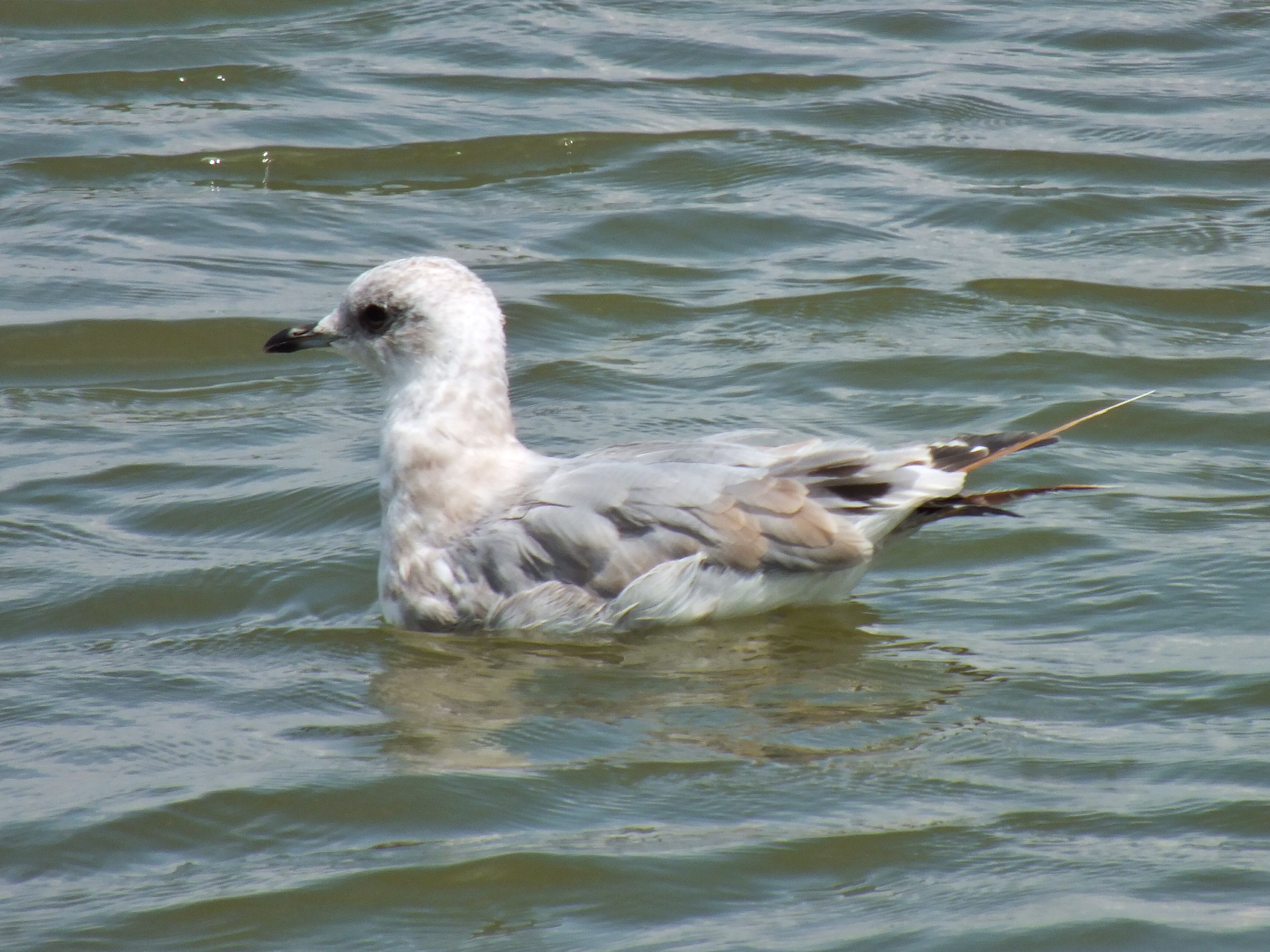 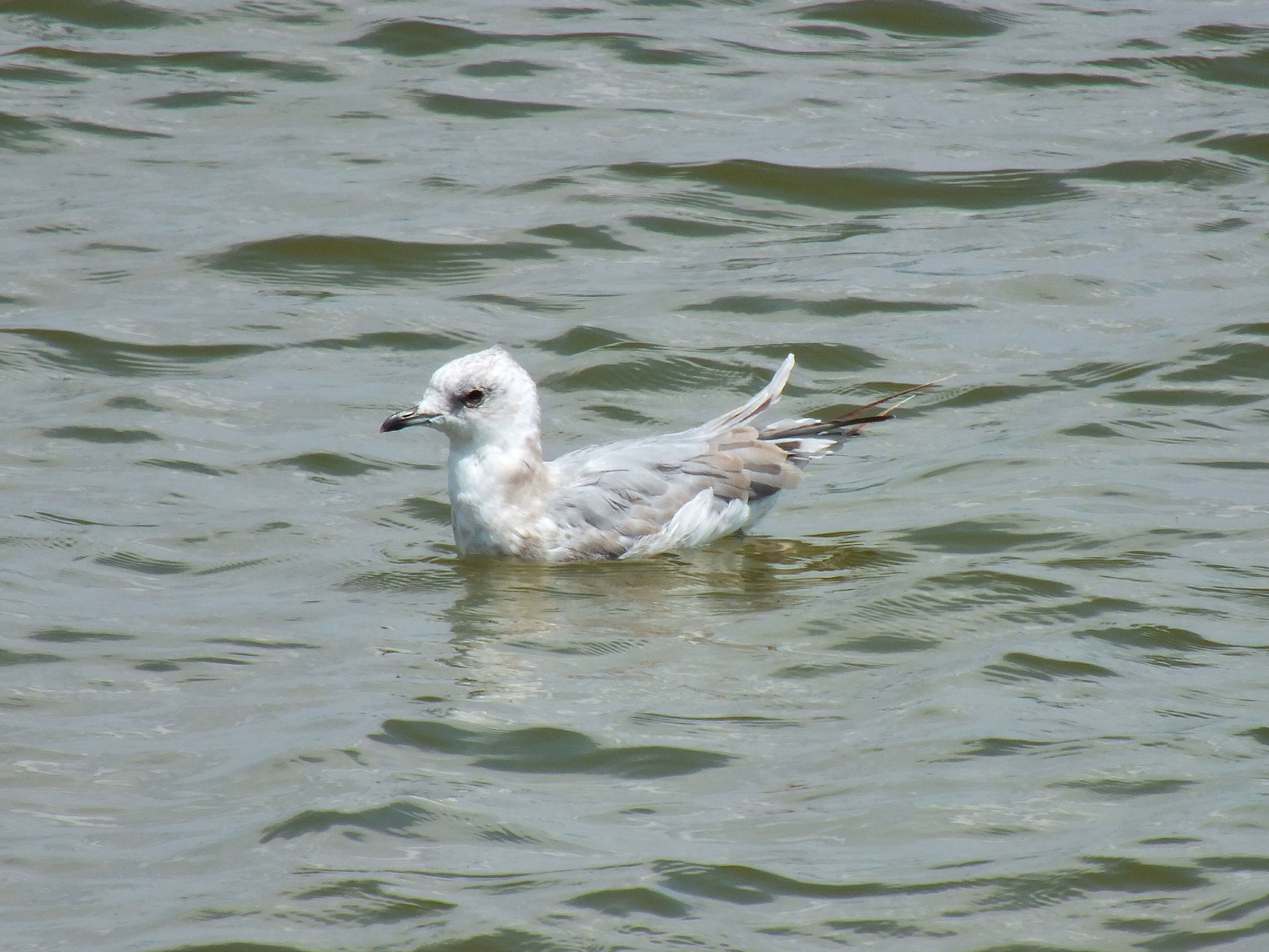 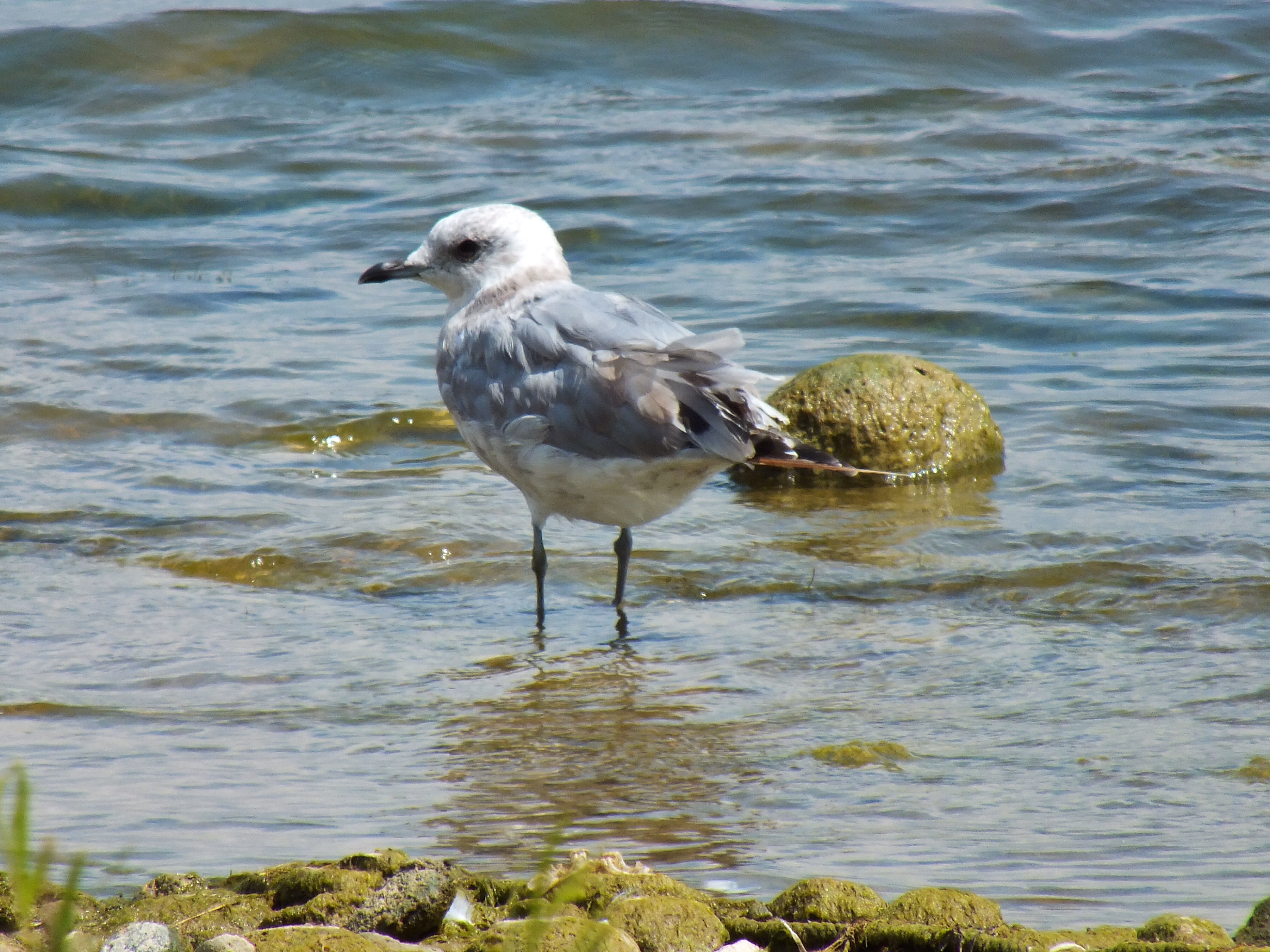 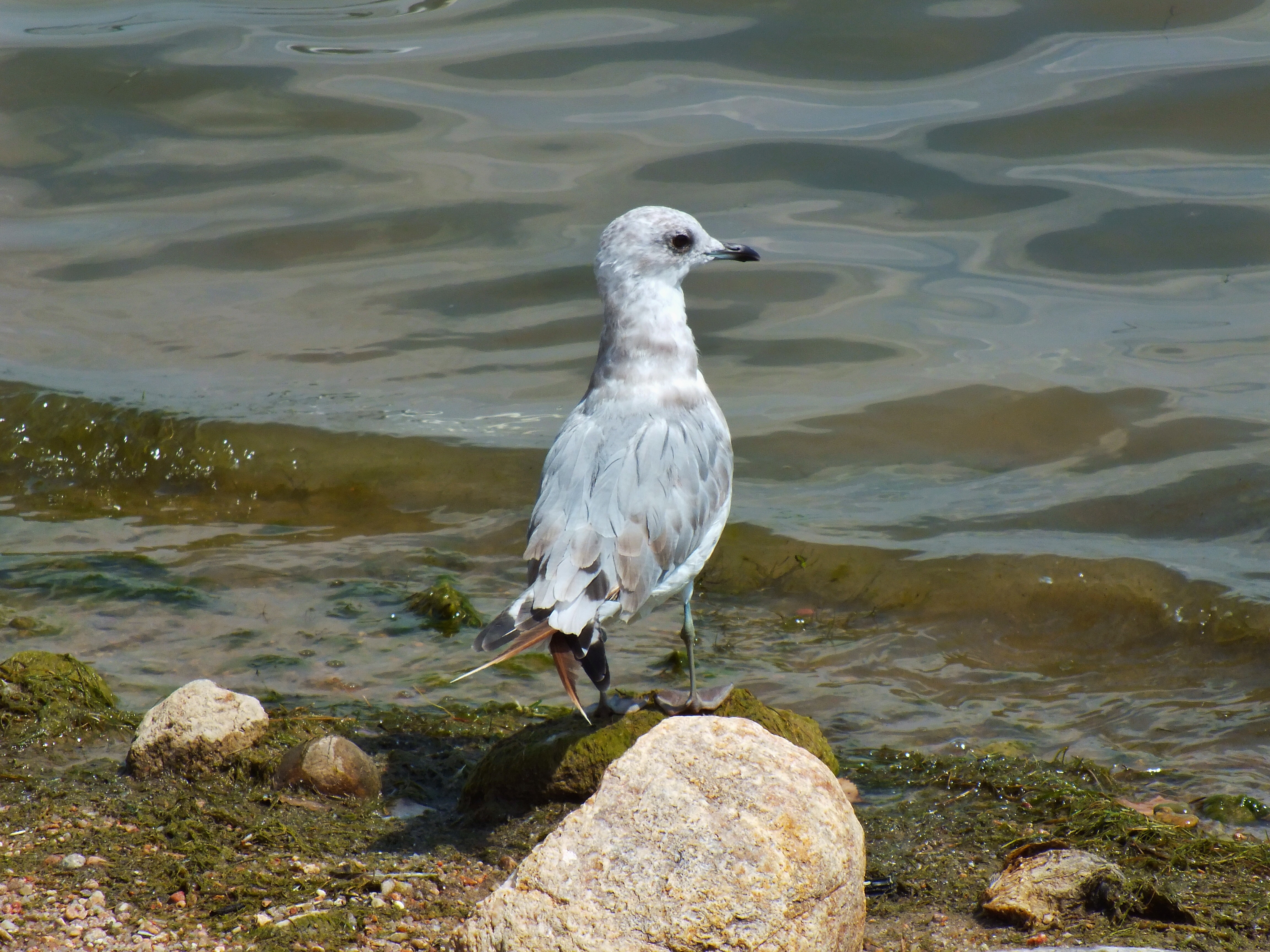 As you can tell from the photos, its back end looked decidedly chewed-upon. Either something (hawk? dog?) grabbed it, and it managed to get away, or it happened to molt a whole lot of important feathers at once.

The Mew Gull i.d. marks are it’s small size compared to other white-headed gulls, its round head with a gentle look, its small bill with a black tip, its grayish legs, and the fact that the few remaining tail feathers are brown and not black.

Here it is swimming next to a Ring-billed Gull for comparison. Note that the Ring-bill is larger, with a more substantial bill that’s pink at the base. Also, the Ring-bill tail feathers have black on them, not brown. 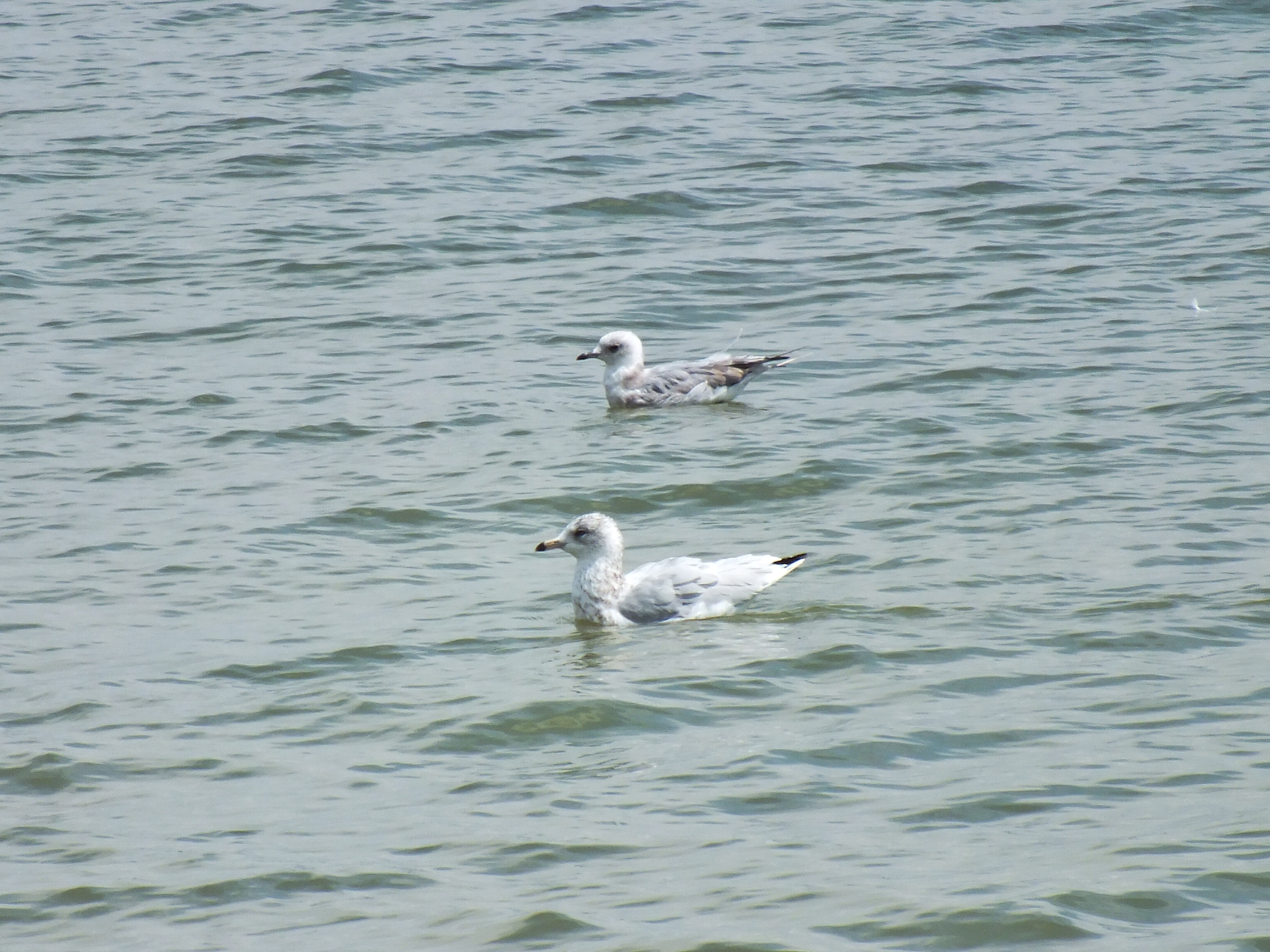 And here it is next to a first-year California Gull. 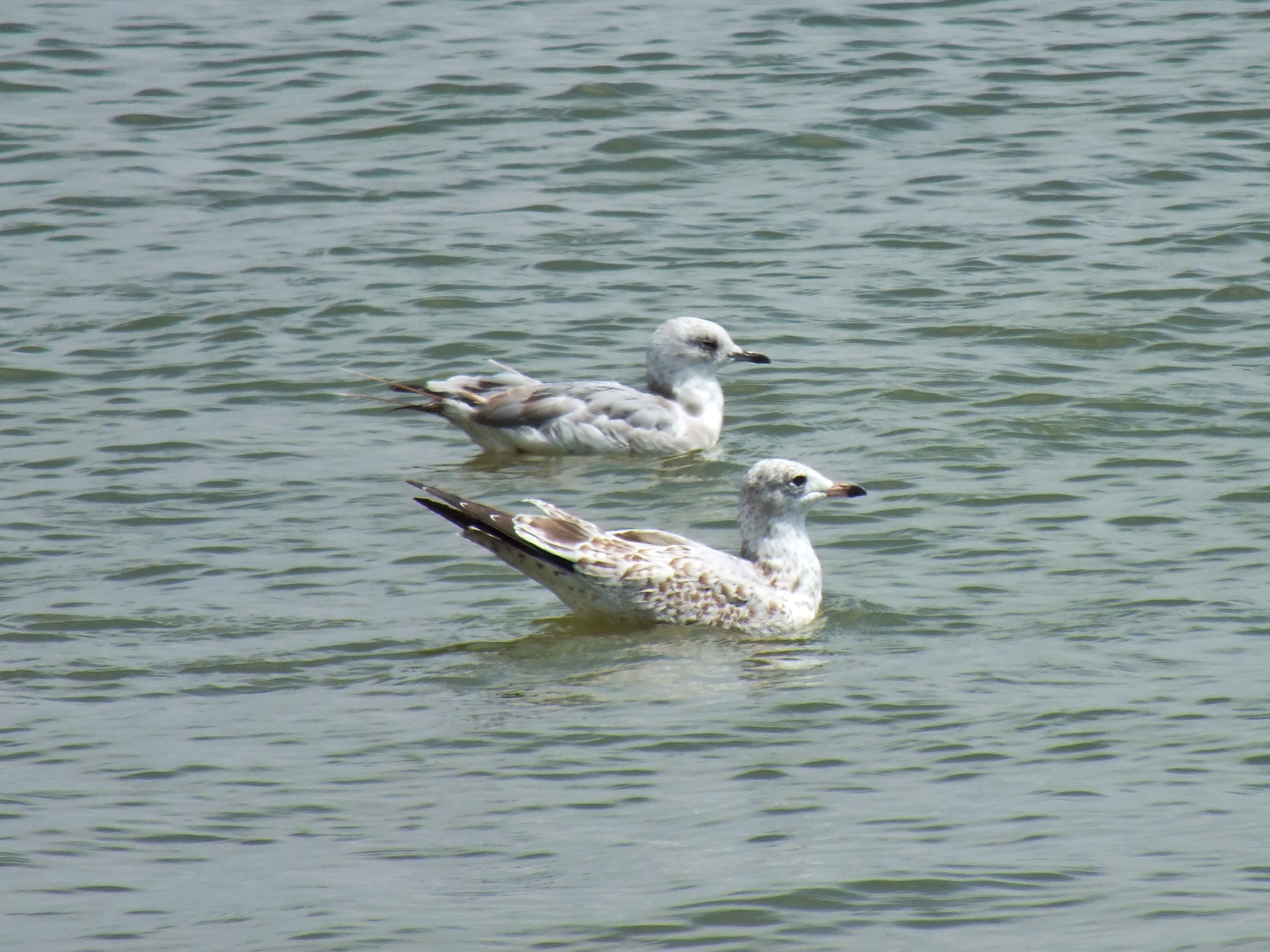 Mew Gulls breed in North America throughout most of Alaska and northwestern Canada. They winter along the Pacific Coast. But every year, a handful show up on larger lakes in Colorado. I had determined to go for it the next time I saw a report. It turned out to be a lot easier than I’d expected.

Other birds I saw at the park this day. An immature Black-crowned Night-heron with two Snowy Egrets in the foreground and three California Gulls in the background. 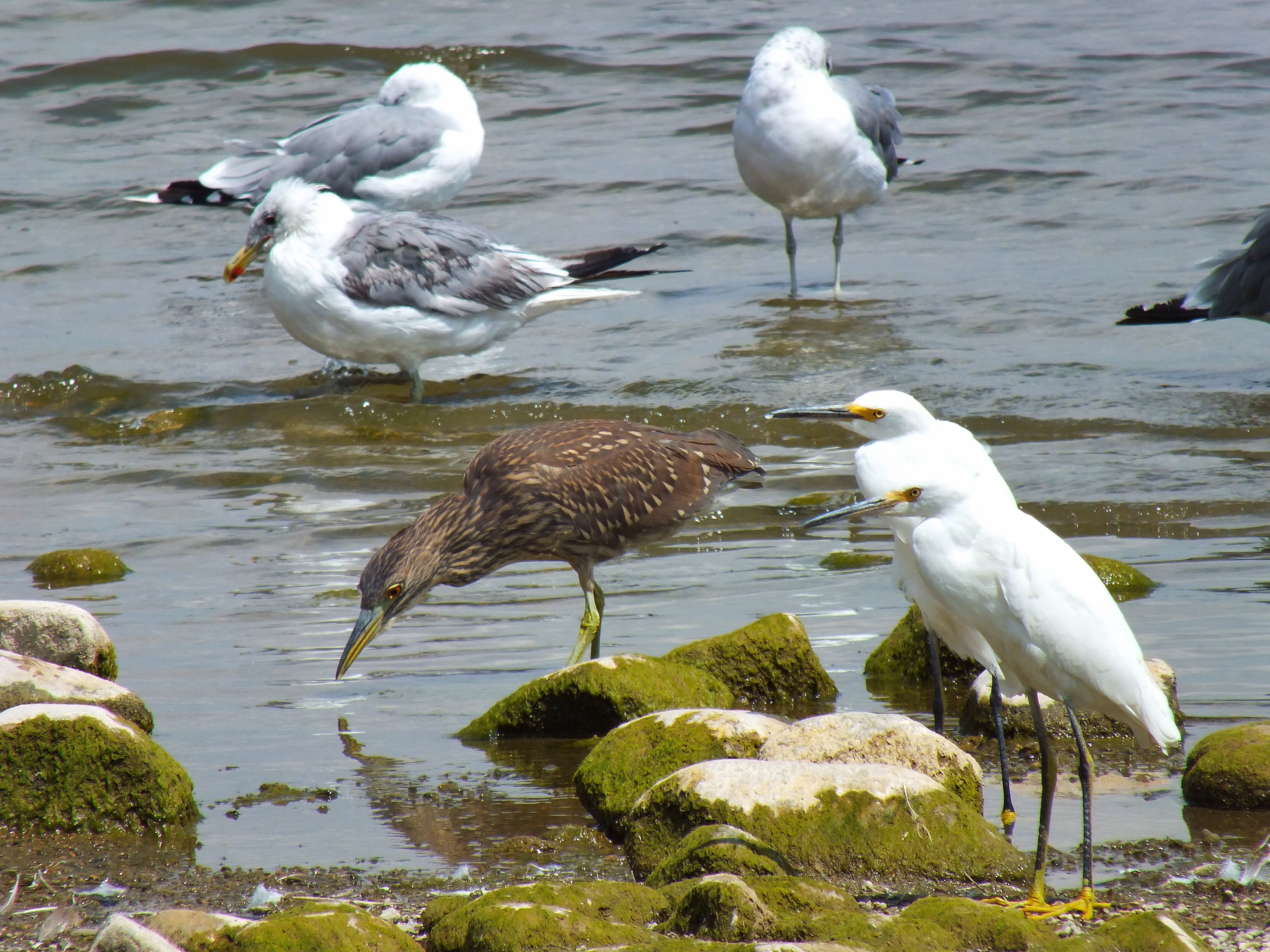 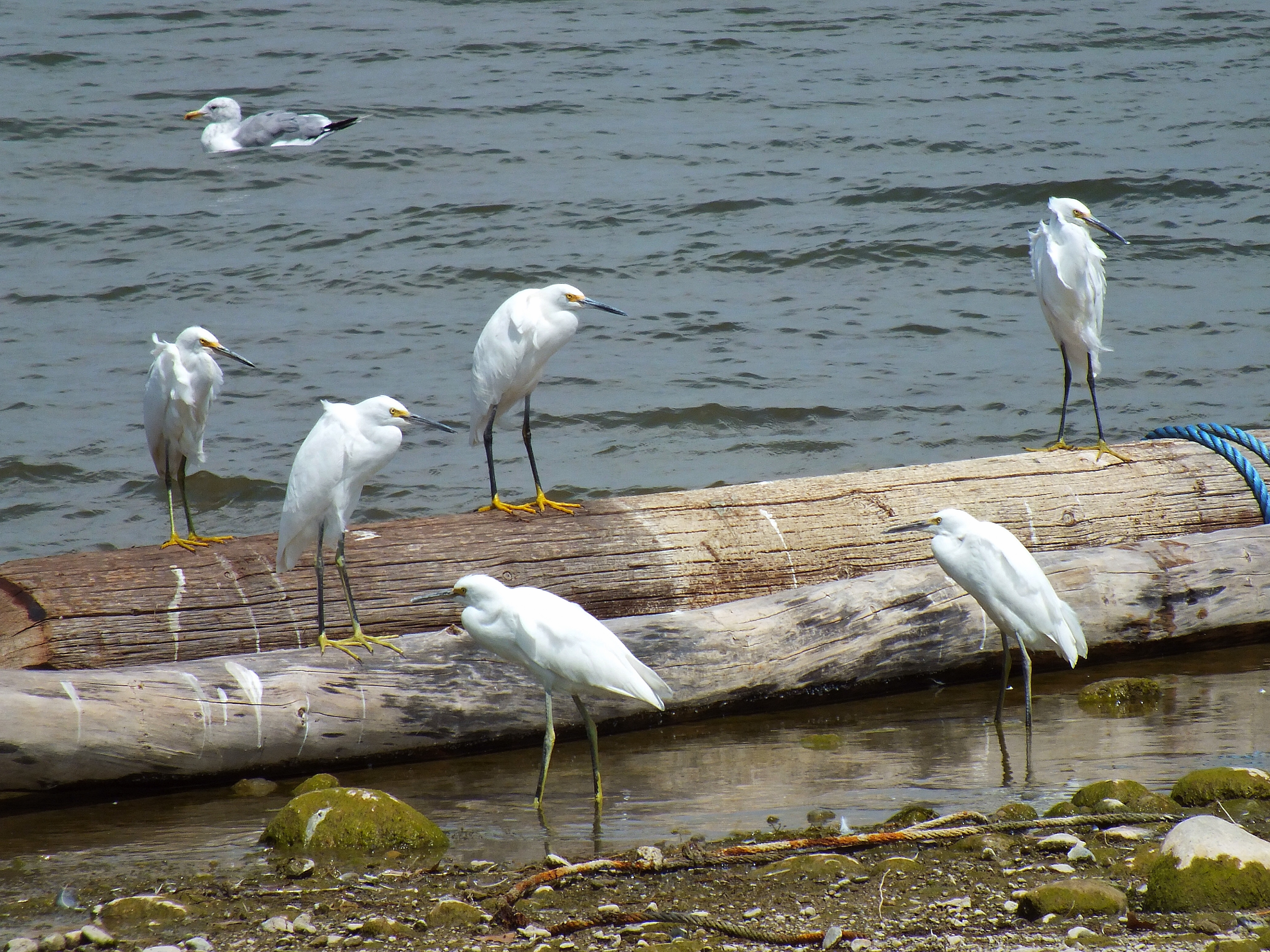 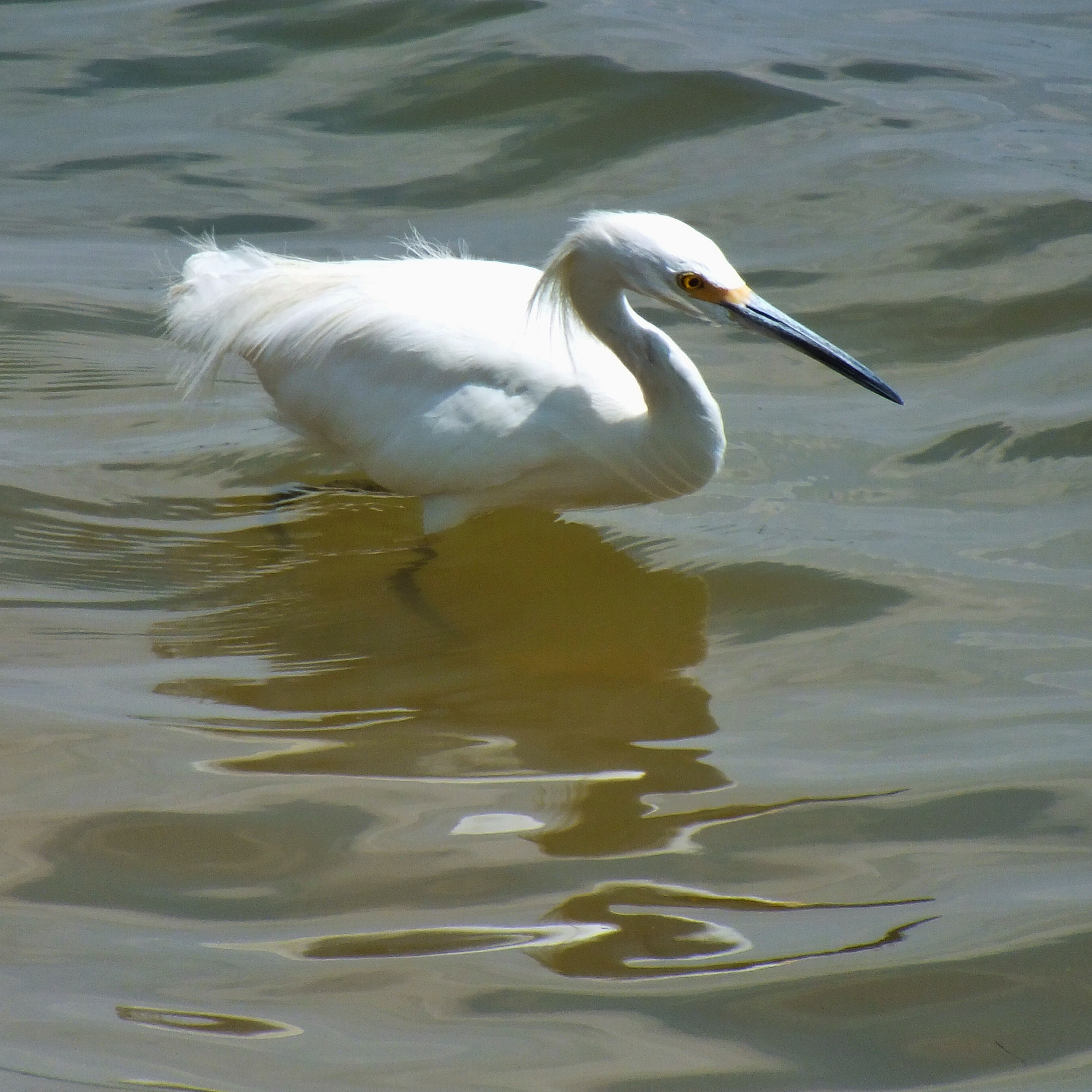 And in the cottonwoods in the wetlands at the south end of the park, a Great Horned Owl. 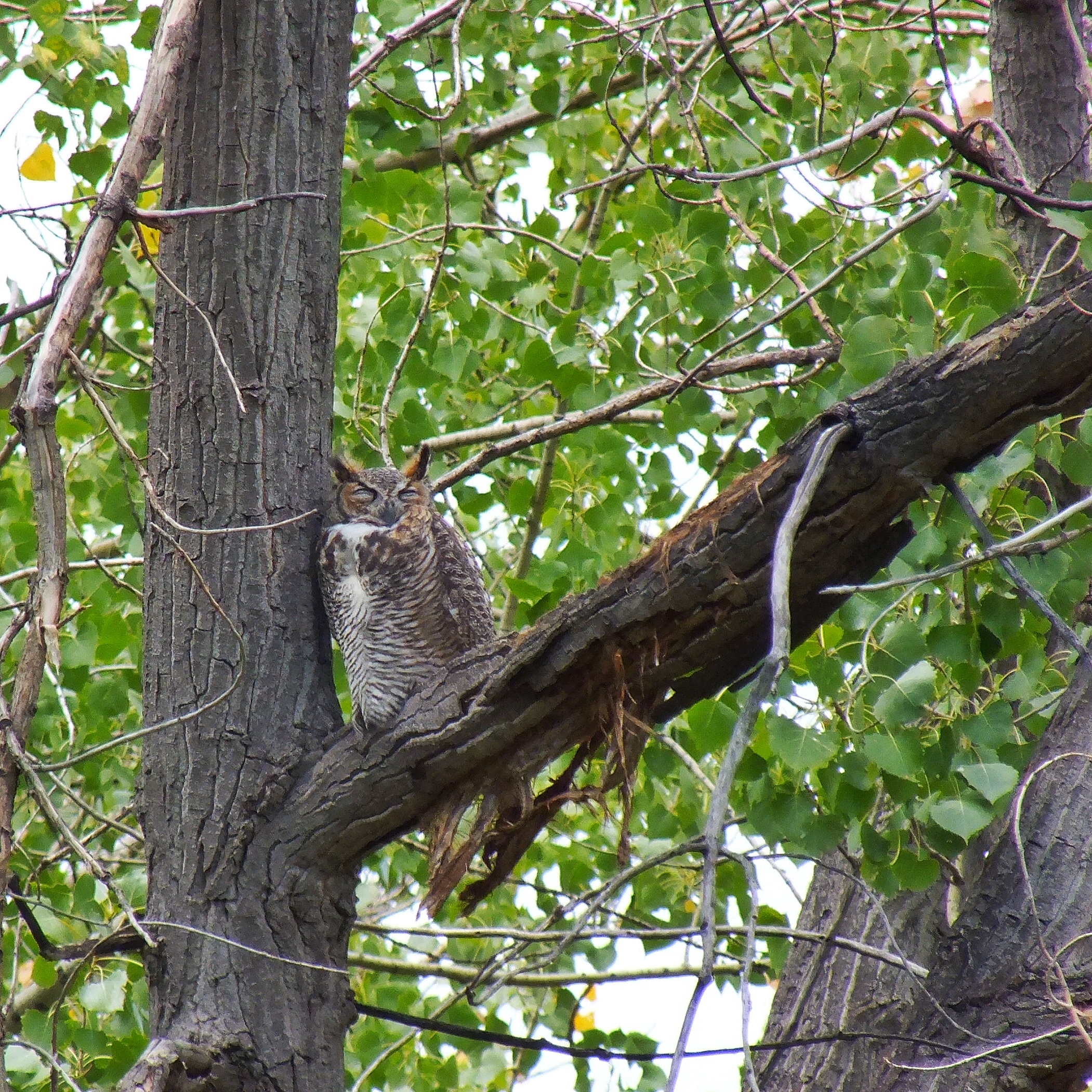