After touring Lincoln’s home, we drove to his tomb. We saw the slab, walked around the monument and let the girls rub the nose of the Lincoln bust in front. This is supposed to bring good luck, and so many people have done it that the nose of the bronze statue shines bright gold. As I was lifting the girls up, a guide came to the door of the monument and stared at us. I didn’t know if we were being bad, so I asked him if this was the statue that was supposed to bring good luck. He reluctantly answered “So I’ve been told.” I asked him if it worked for him. He said no, tried unsuccessfully to suppress a smile, and walked back inside.

While we were there, I walked down the hill a little ways to see the site (the gray stone in the photograph) of the temporary vault where Lincoln’s body was kept until the monument was completed. 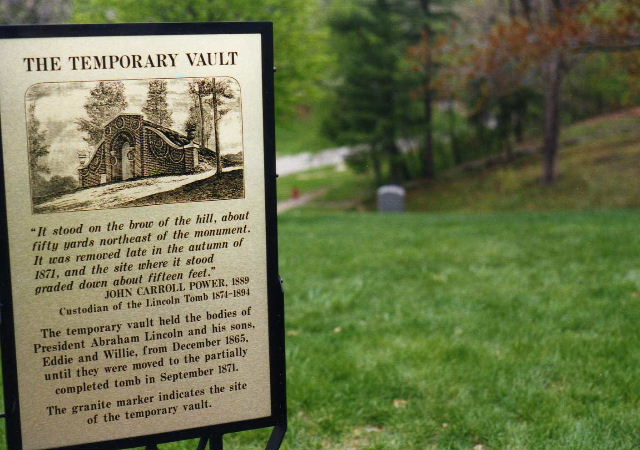 “It stood on the brow of the hill, about fifty yards northweast of the monument. It was removed late in the autumn of 1871, and the site where it stood graded down about fifteen feet.” — John Carroll Power, 1889. Custodian of the Lincoln Tomb 1874-1894.

The temporary vault held the bodies of President Abraham Lincoln and his sons, Eddie and Willie, from December 1865, until they were moved to the partially completed tomb in September 1871.

The granite marker indicates the site of the temporary vault.