For 16 days every January, Denver hosts the National Western Stock Show. There are feature events—rodeos, concerts, mutton-busting—but there’s also the pure joy of walking around looking at the back end of cows. When I first found out about the stock show, I figured we’d want to spend a day there every year. Now I’m not so sure. For our first trip, we decided to see the Wild West Show, having recently seen the Buffalo Bill Museum in nearby Golden. It was scheduled for late afternoon, but we got there several hours earlier to see what else there was to see.

The “grounds” are squashed into an older industrial section of the city with parking lots and buildings scattered on either side of a railroad track, an interstate, and who knows what else. We arrived late in the morning to discover that all the the convenient parking lots were filled to capacity. The fine men and women who operated these lots had no better information to tell us than, “It’s full. I guess just keep going that way.” We crawled along in bumper-t0-bumper traffic for several blocks. We finally found a spot behind the Rocky Mountain Pipe Company. Even after we got into the lot, we had to wait another five minutes to park because a guy with a pickup too big for him to handle insisted on backing into his space.

We walked across the lot, down a small berm, and through a hole in a fence. Somebody had placed a piece of iron plating over the chain link so it wasn’t terribly difficult to navigate, but after making it through the fence, we had to wend our way though a minefield of cement blocks and holes. 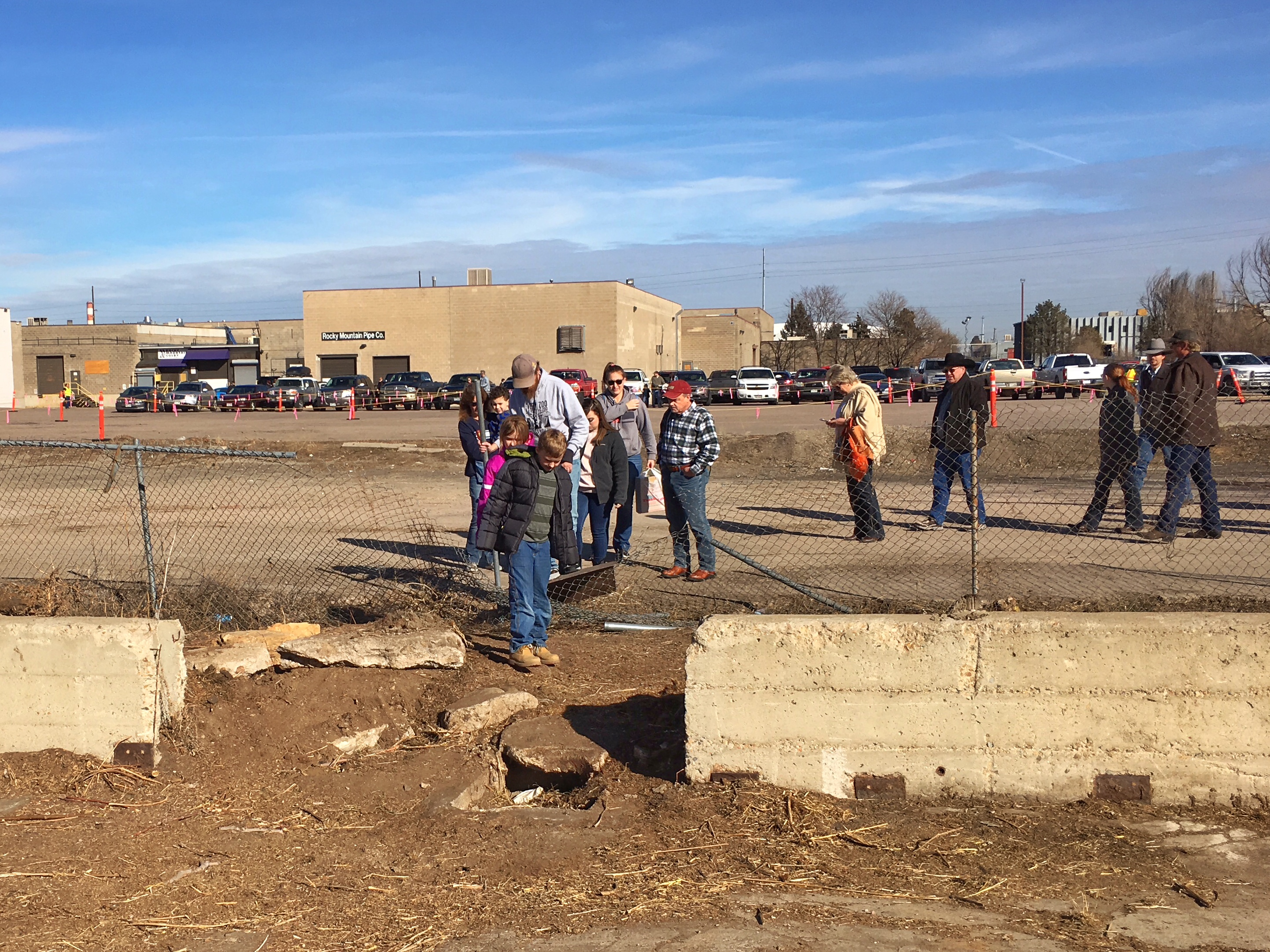 After a stroll through an uneven gravel lot, we filed through a gate that said, “No Public Access.” 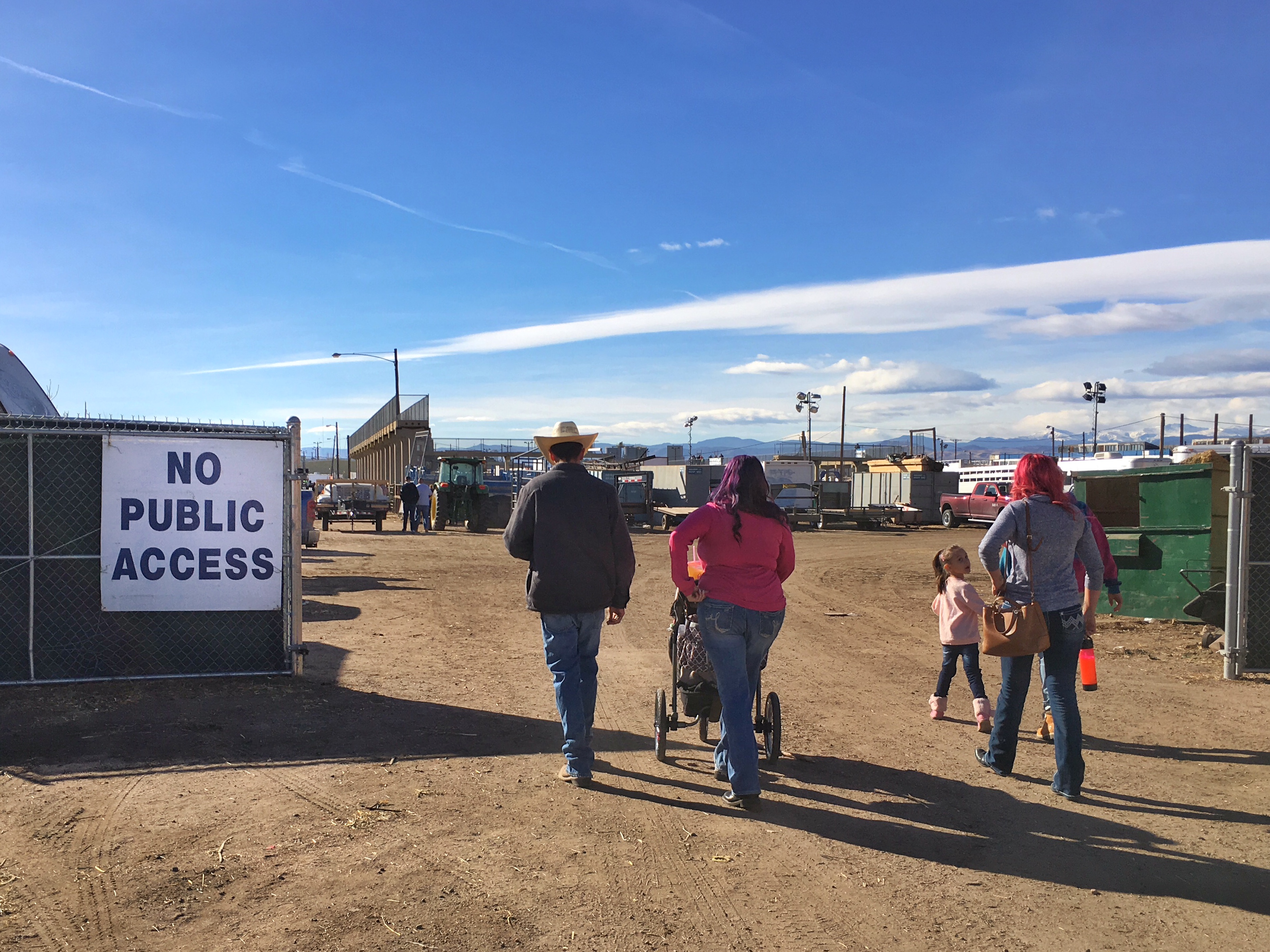 We finally found our way to the stock yards where ranchers were fluffing up their cattle to make them look pretty. 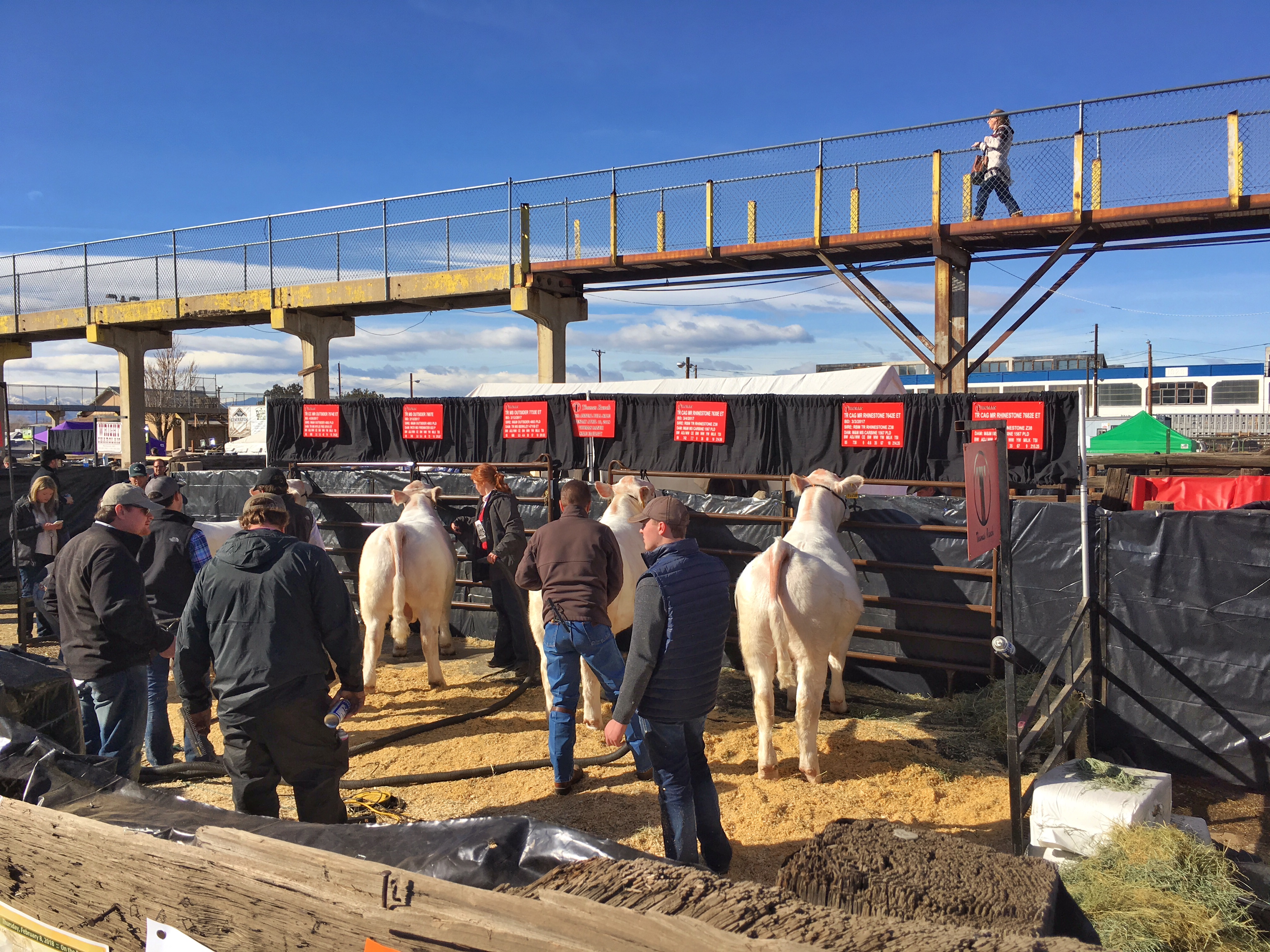 And it was impressive. When they were done, hair looked like velvet and the beasts were spotless. 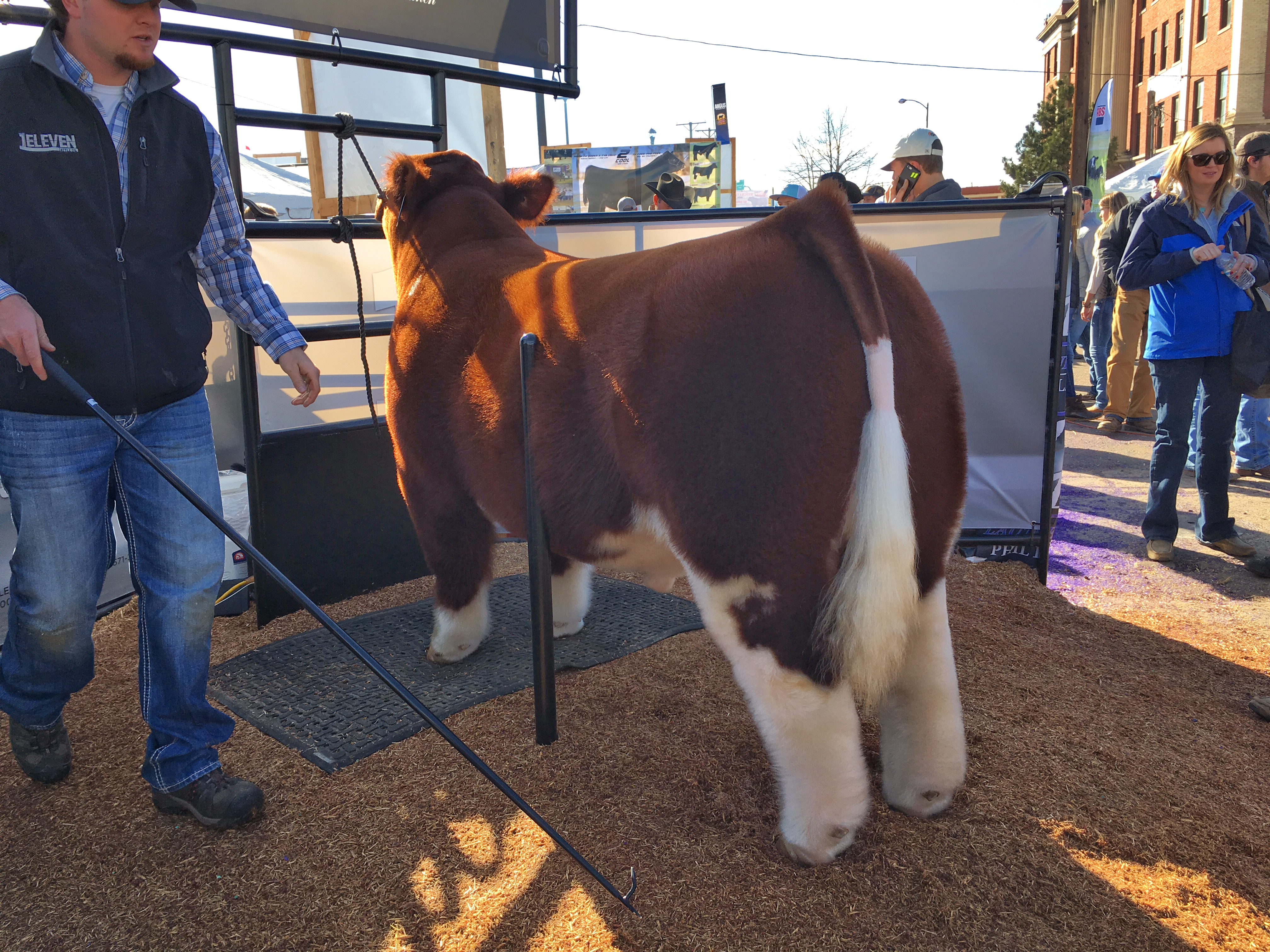 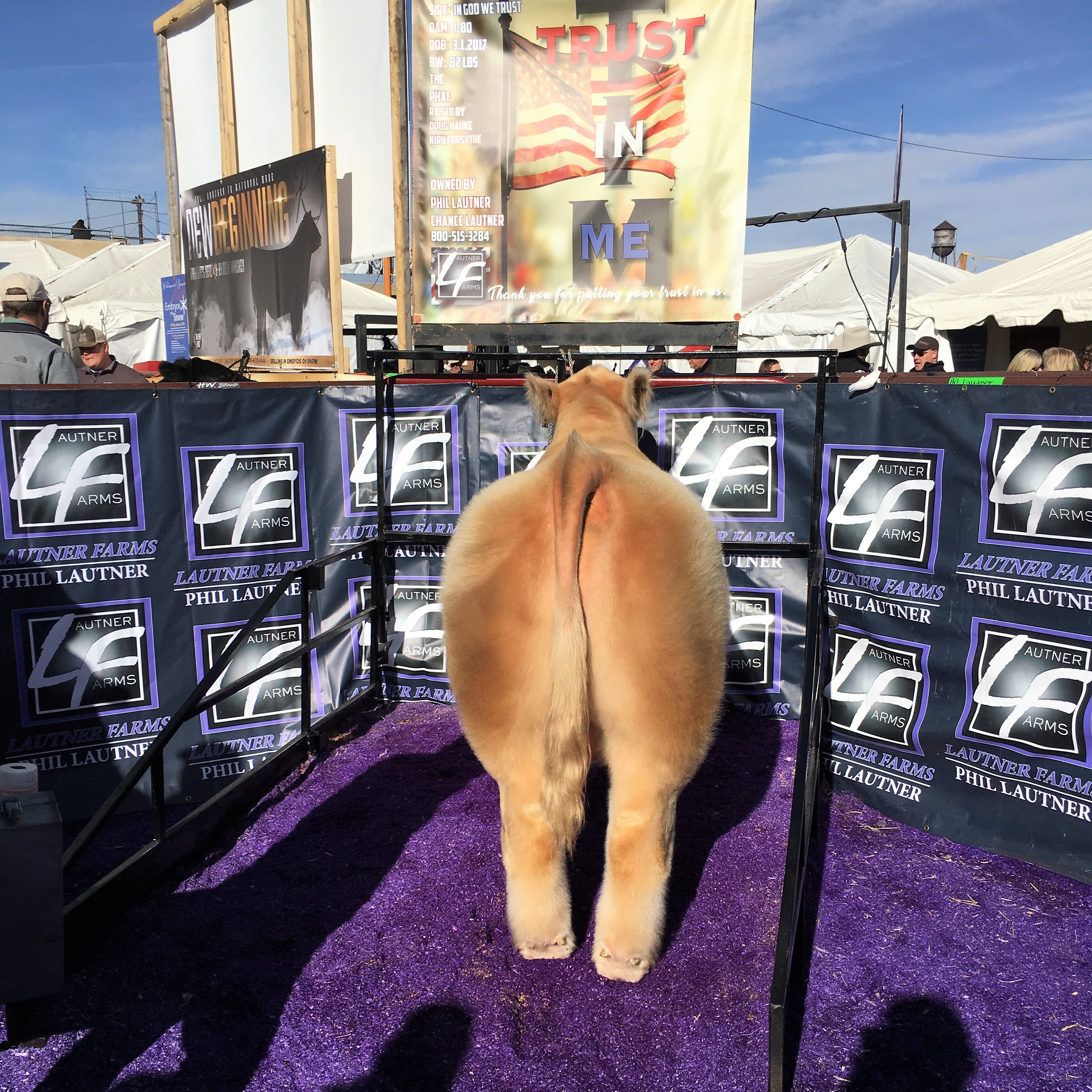 People were leading their cows back and forth down the aisles, so walking anywhere was a tricky affair—not just because of the cattle, but because of what they left behind. After wandering aimlessly for a while, I stopped at an information booth and asked, “We have tickets to the Wild West Show. Where do we need to go, and how do we get there?” The man pointed to a large building on the other side of the tracks and told me there was tunnel up ahead, just beyond the admission ticket booth. We found it, and a long line to buy tickets. The people operating the booth must have been hired specifically for their incompetence. The line crawled. In a half hour, we’d moved maybe 15 feet and we still had 50 feet to go. That’s when I noticed that our tickets to the show said, “Includes free grounds admission.” Oh.

We went through the tunnel and entered an area somewhat more organized than where we’d been. It was lunchtime, so we headed for the food court. We had cheeseburgers and bottles of pop, which weren’t bad, to our surprise, but expensive. We found a lovely spot nearby to enjoy a view of Denver while we ate. 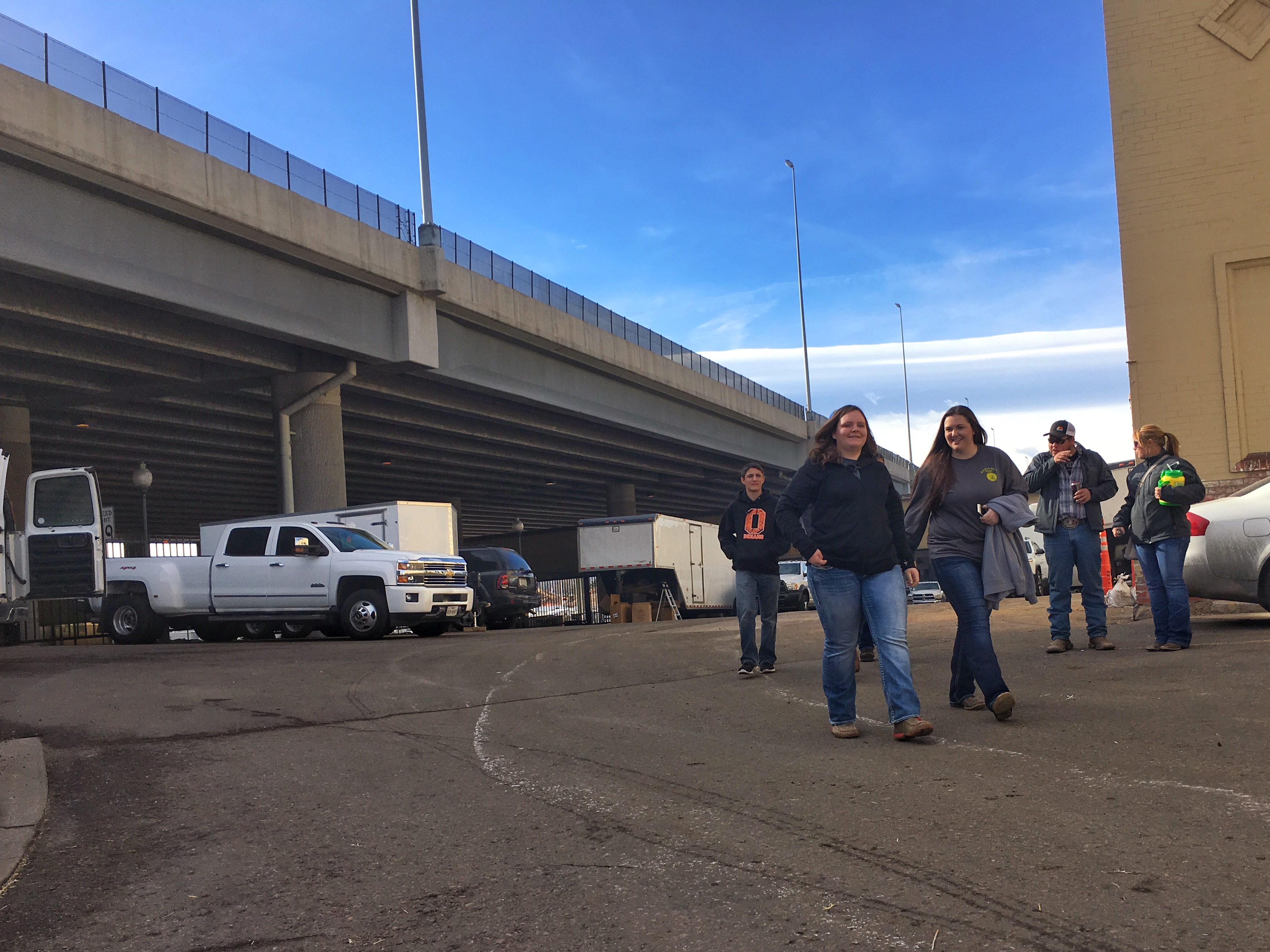 We wandered the exhibition hall for a while, looking at the booths of western clothing and western furniture and cattle corrals. There really wasn’t much there for us, but I did buy a coonskin cap since I’d just watched the original Davy Crockett Disney movies the night before. The room was packed with people, and I had to exercise a tremendous amount of patience with those families who were completely and totally unaware of how anything they do (like spreading out side by side to fill the entire aisle and then stopping to discuss where the bathrooms are) affects those around them. 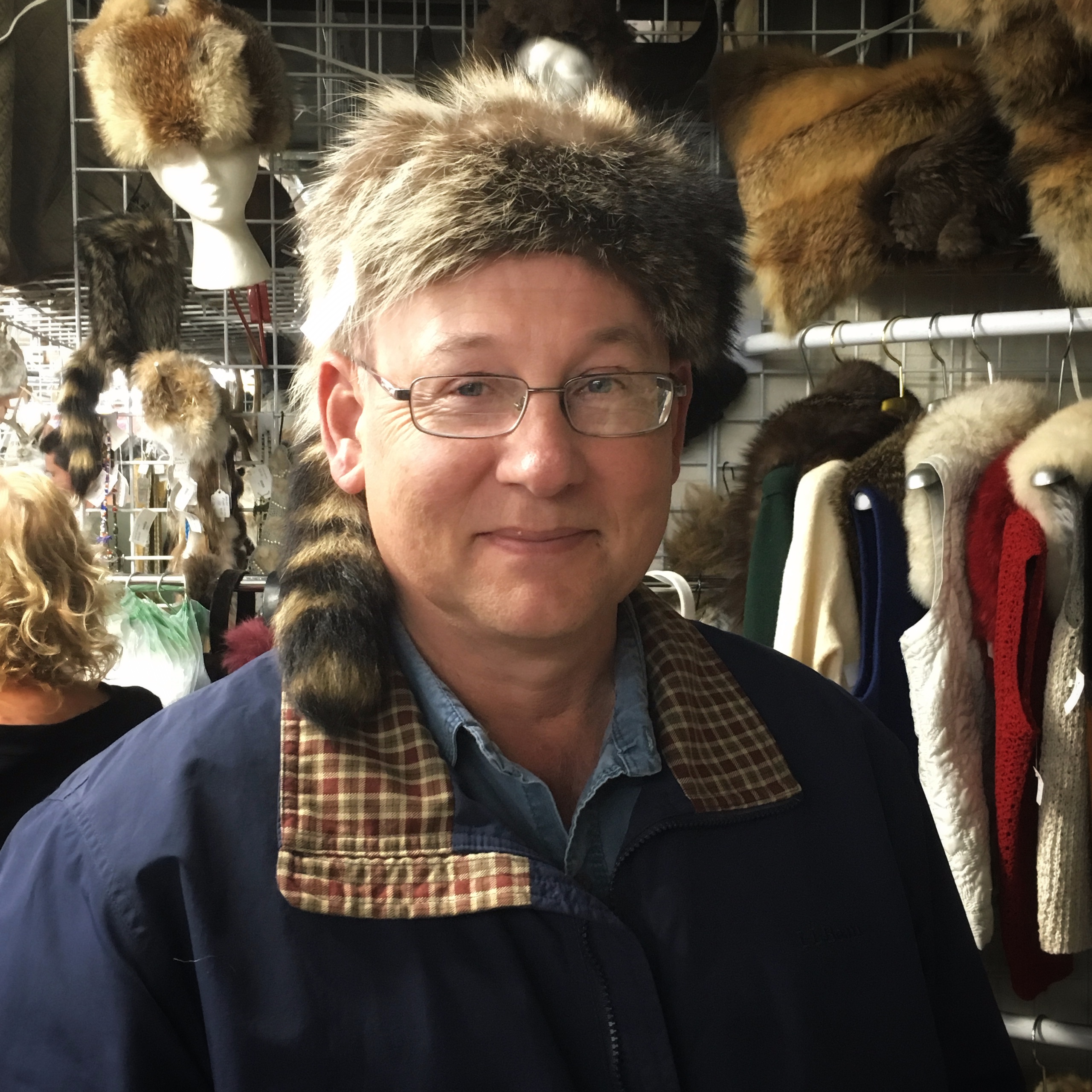 It was about this time that I began to worry that the time on our tickets for the Wild West Show was 4:00, but the daily schedule said 5:00.

We found an arena where owners were showing Hereford cattle and sat and watched for a while.

It wasn’t the most exciting show we’ve ever seen. I left my wife there and went hunting for answers. When I found the arena where the Wild West Show was to be held, I asked an usher about the time difference. He figured it out almost immediately. Do you see it? 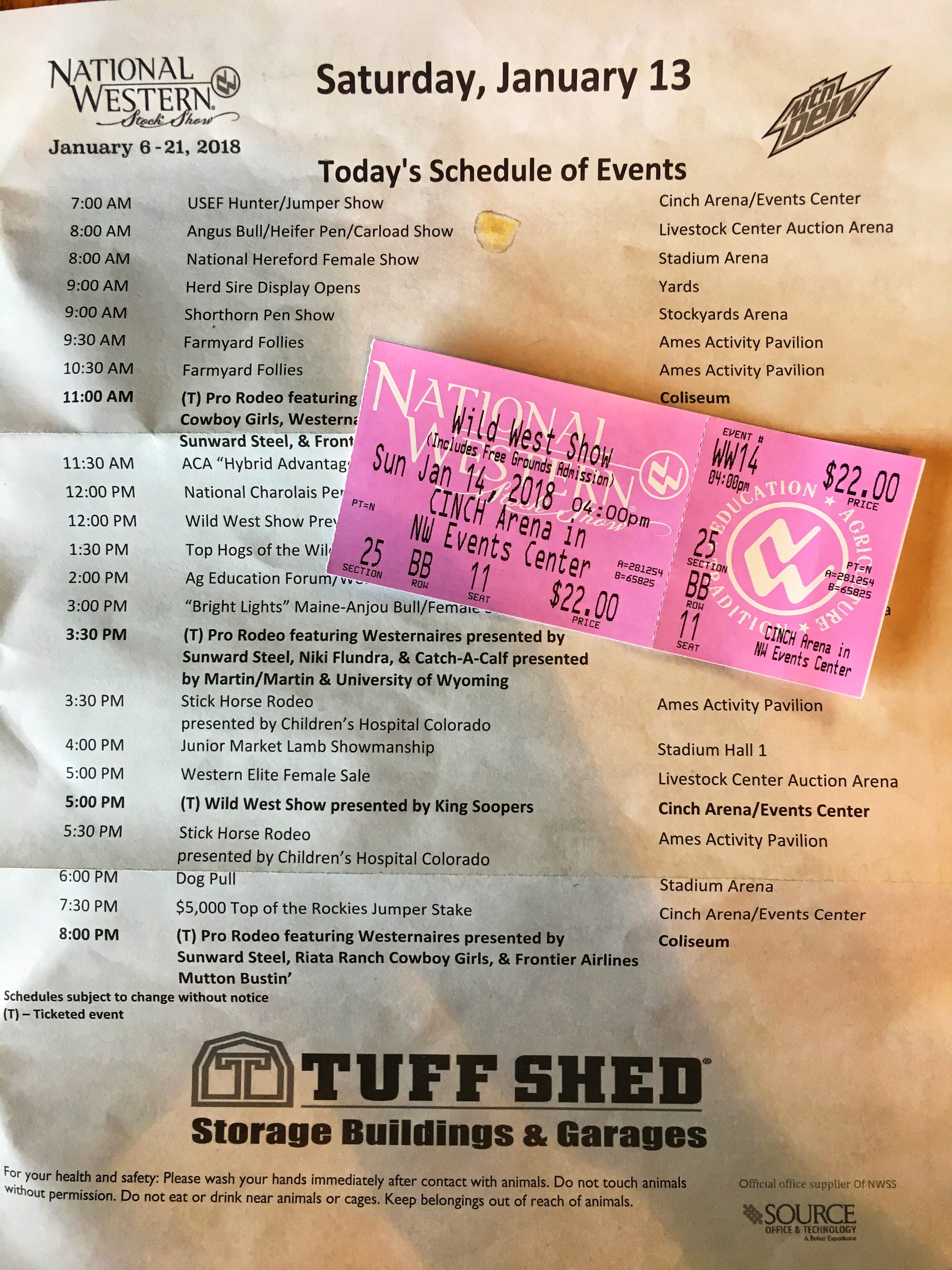 Yes, I had brilliantly come on the wrong day. At this point, there was no way I was going home and coming back to fight that traffic and parking and crowd situation again. I asked the guy if there was a way we could slip in. He told me which entrance he’d be stationed at later, but warned me that he couldn’t guarantee us seats. At this point, that was fine.

I went back and found my wife. We strolled through the barns and saw colorful sheep. 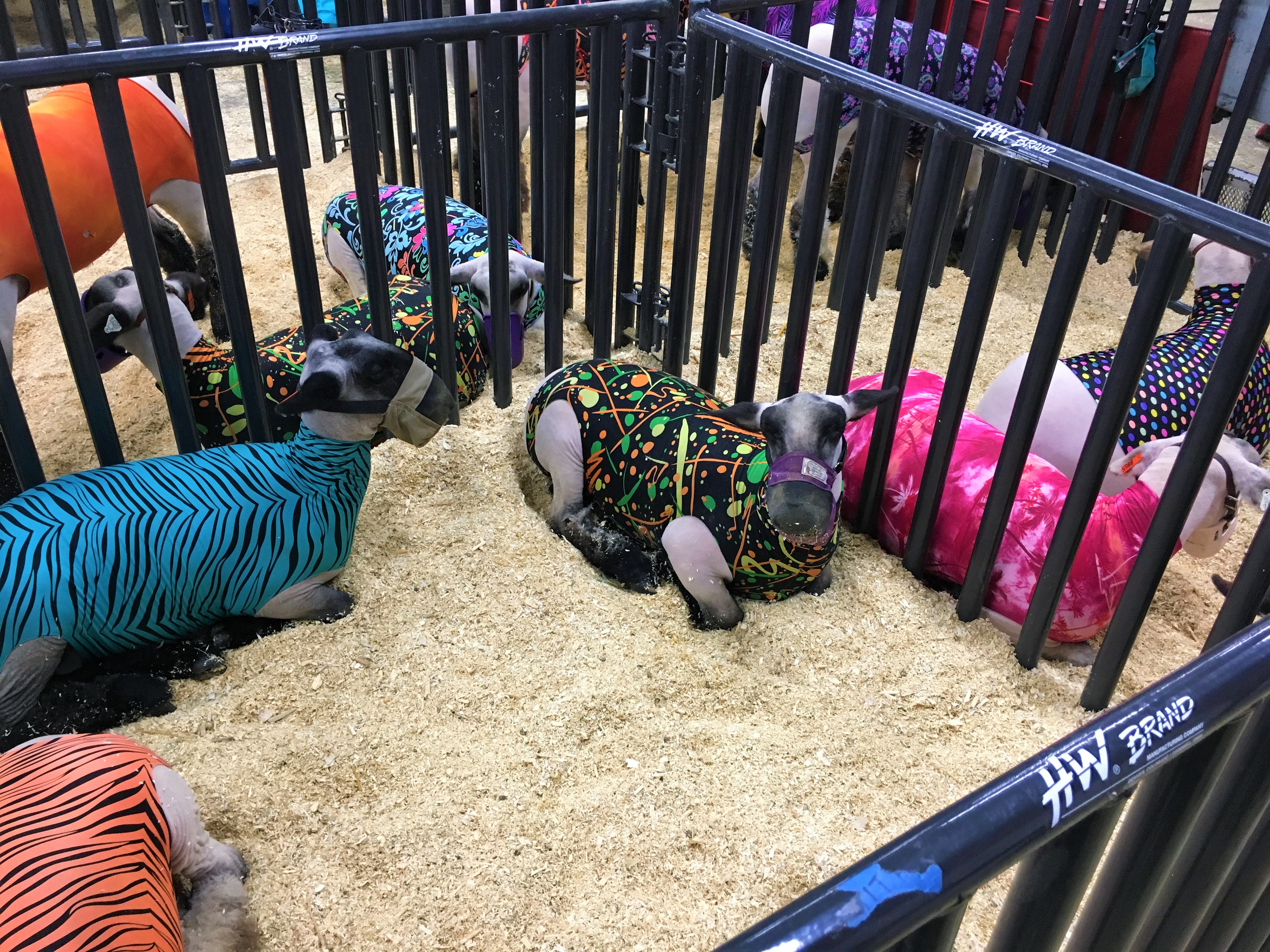 And more cow-fluffers. Seriously, these guys were going at it with combs and polishes and precision razors, cutting off almost-invisible bits of hair. Like a spa day for a heifer. 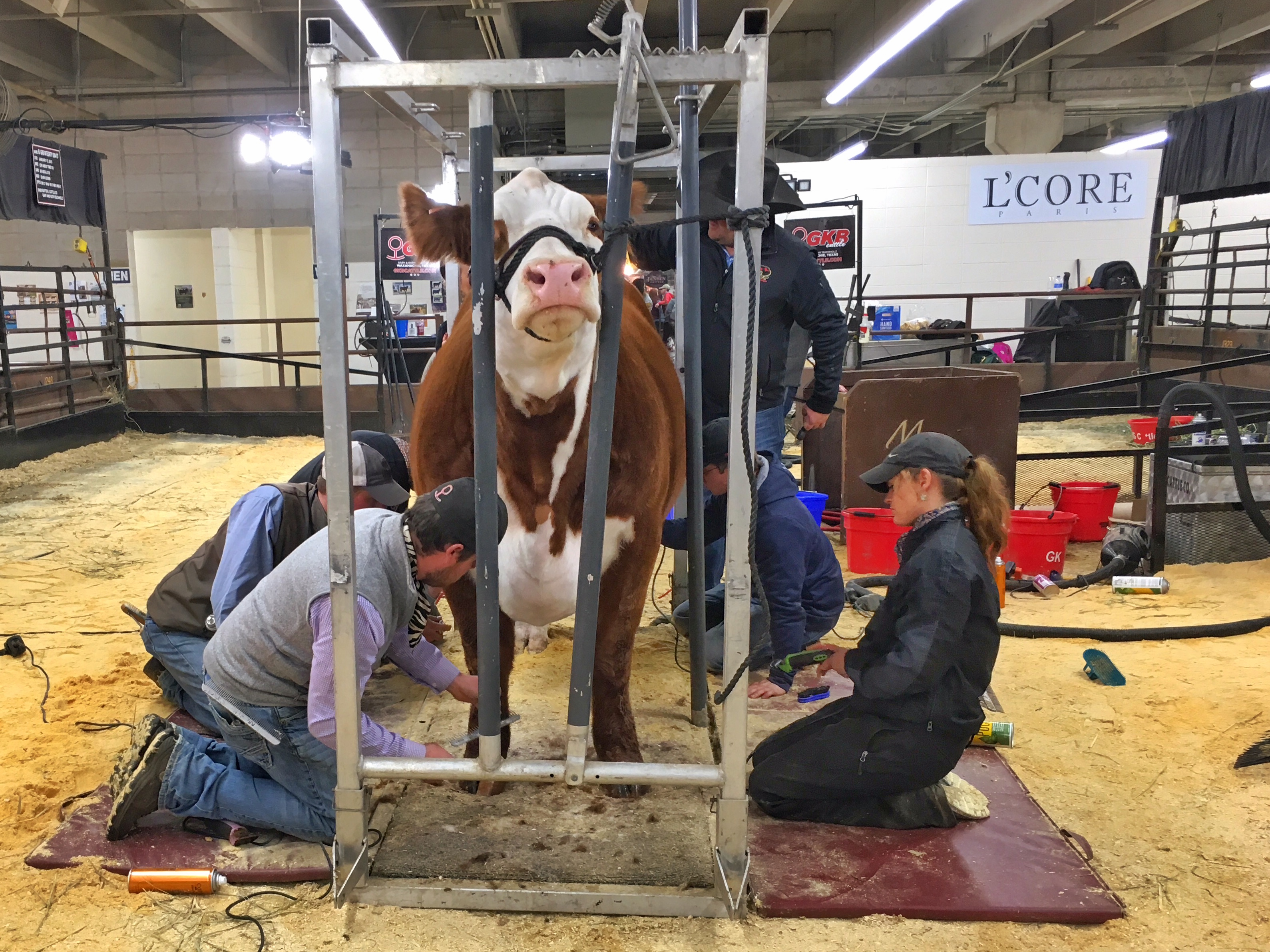 Then we stumbled upon the best part of the day. In a nearly empty arena, we watched about an hour of a horse jumping competition.

I think this horse was actually the winner. Many of the contestants knocked down bars. A few refused to jump. One horse managed to get its rider over a jump without going over itself.

We had to leave the arena so they could seat for the Wild West Show. We stood in the lobby for half an hour, then went back in. I’ll cover the show in my next post. I’ll just say here that we stood on the concourse until the show began and then found perfectly suitable seats, so the whole wrong-day debacle wasn’t a disaster.

Afterwards, we went back through the tunnel, filed through the stock yards (in the dark, so we couldn’t see what we were stepping in this time), out through the “No Public Access” gate, over the fence on the piece of iron, and home. 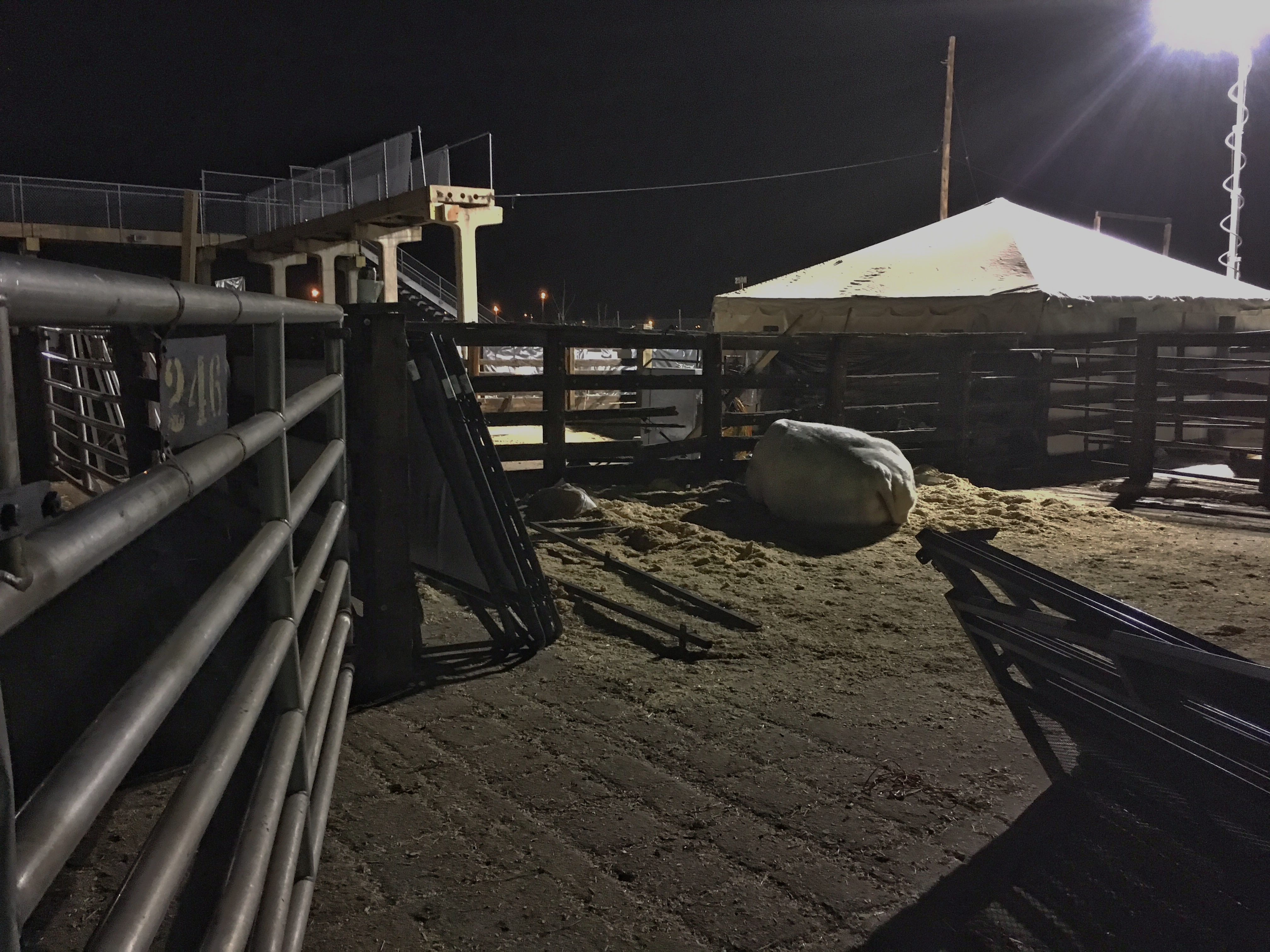 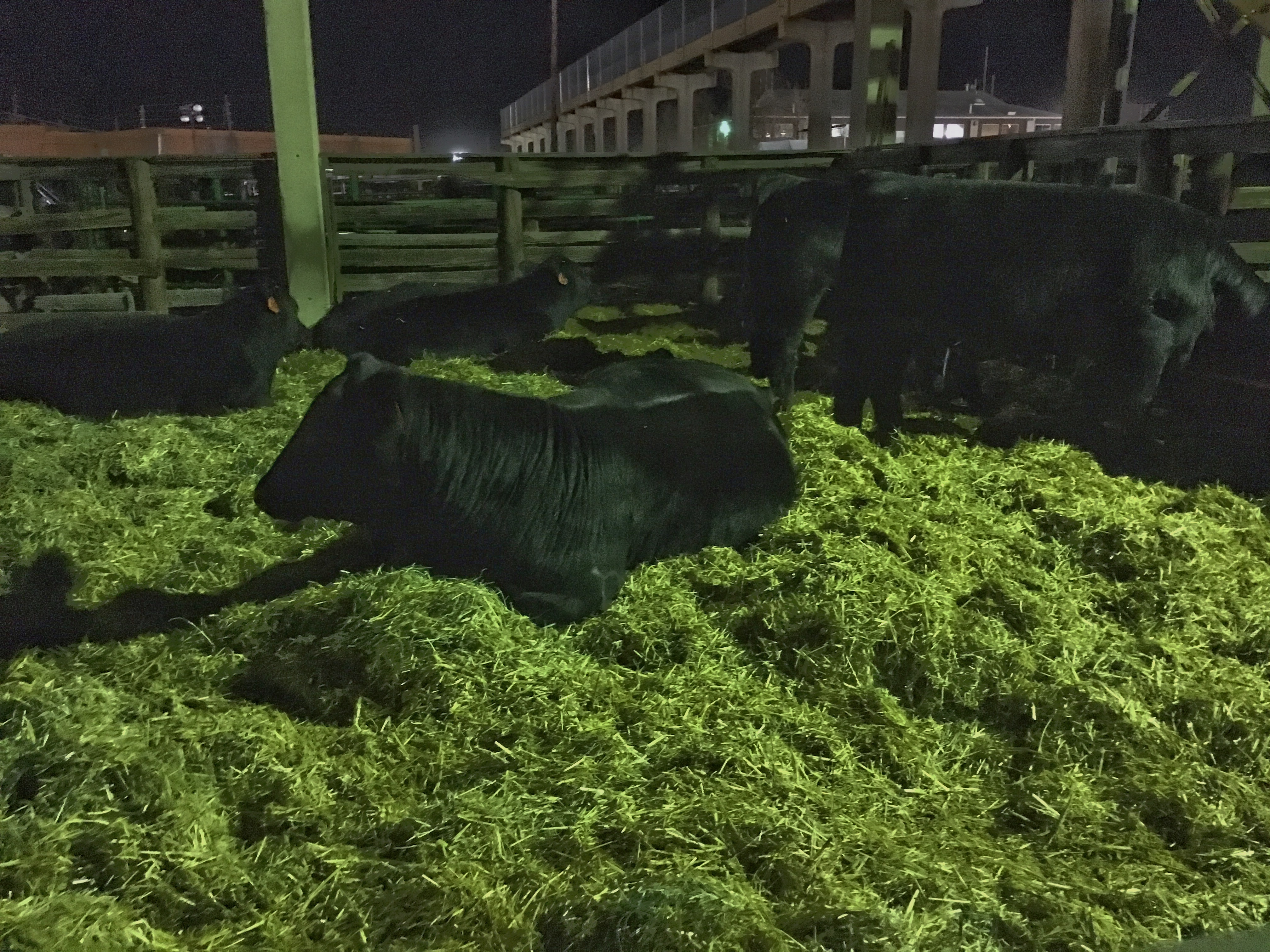 There are plans underway to rebuild the entire area, with new buildings and stock yard and parking underneath. It’s all due to be completed in six years. We might not wait that long to go back. But then again, we might.