It’s not just that we thought the Wild West Show at the National Western Stock Show might be reminiscent of Buffalo Bill’s Wild West Show, it was actually billed that way.

And I know that entertainment 120 years ago didn’t always live up to its billing. But that was some billing. And that show featured the real Buffalo Bill and Annie Oakley and Sitting Bull. 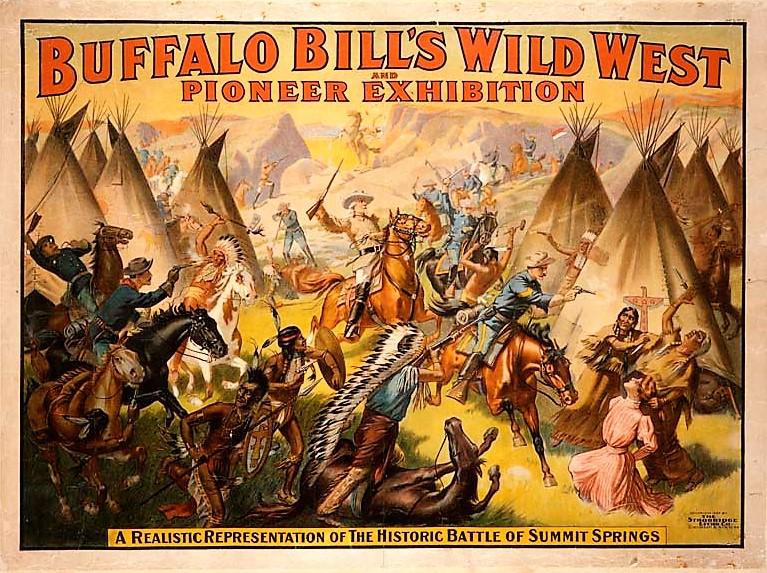 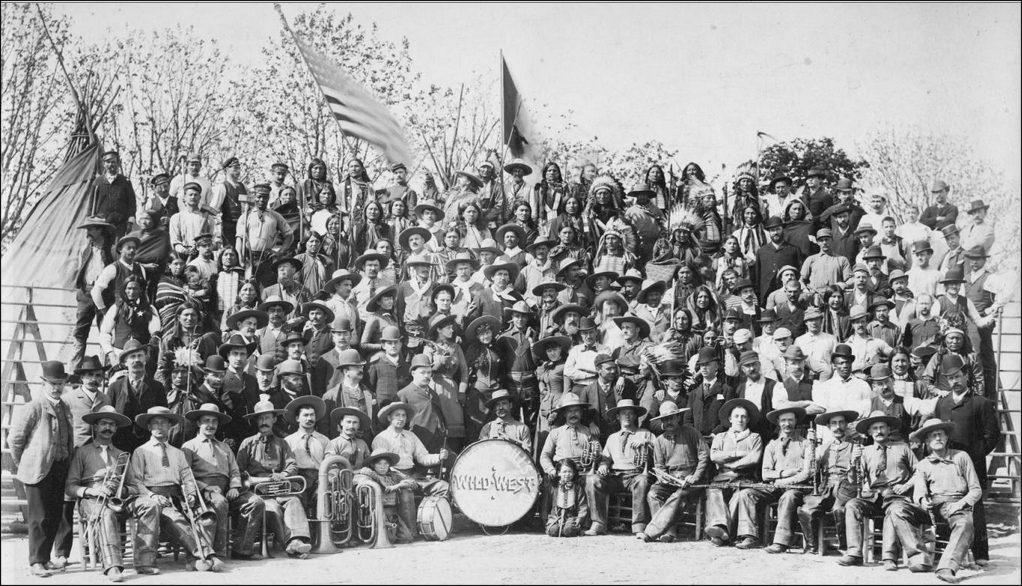 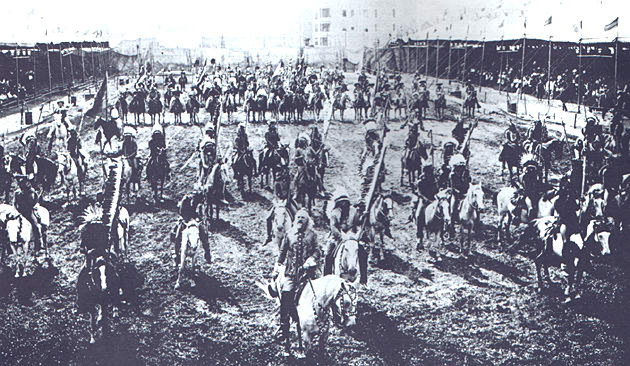 Here’s the cover of the program I bought for our show. (It cost me $1 for a single piece of paper, folded in half.) The driver is seconds away from falling asleep and his shotgun rider is gone. 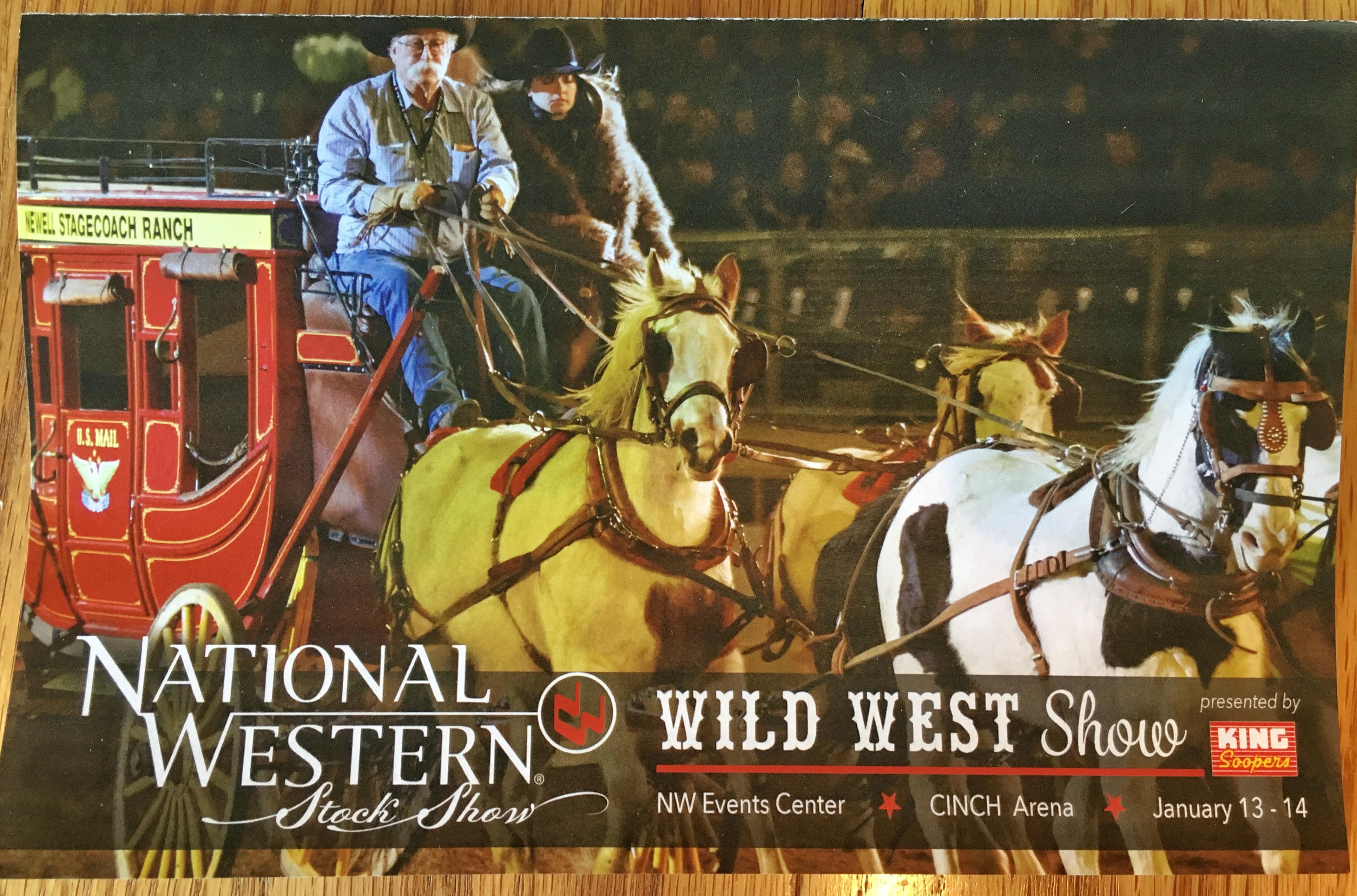 Here’s the inside of the program. 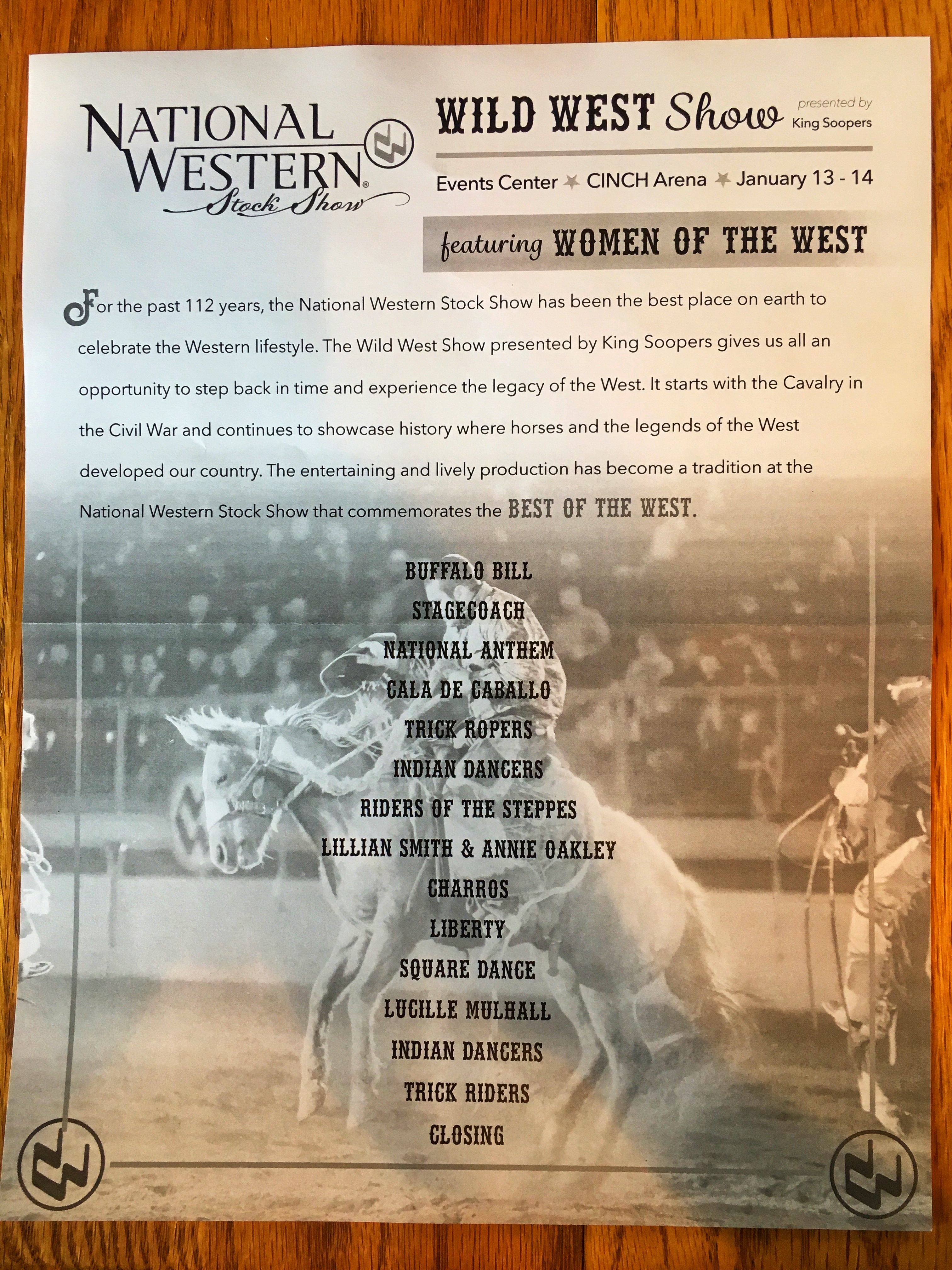 As we waited to see if we would have seats, we watched a light show of sorts—because nothing screams wild west to me like florescent polka-dots. 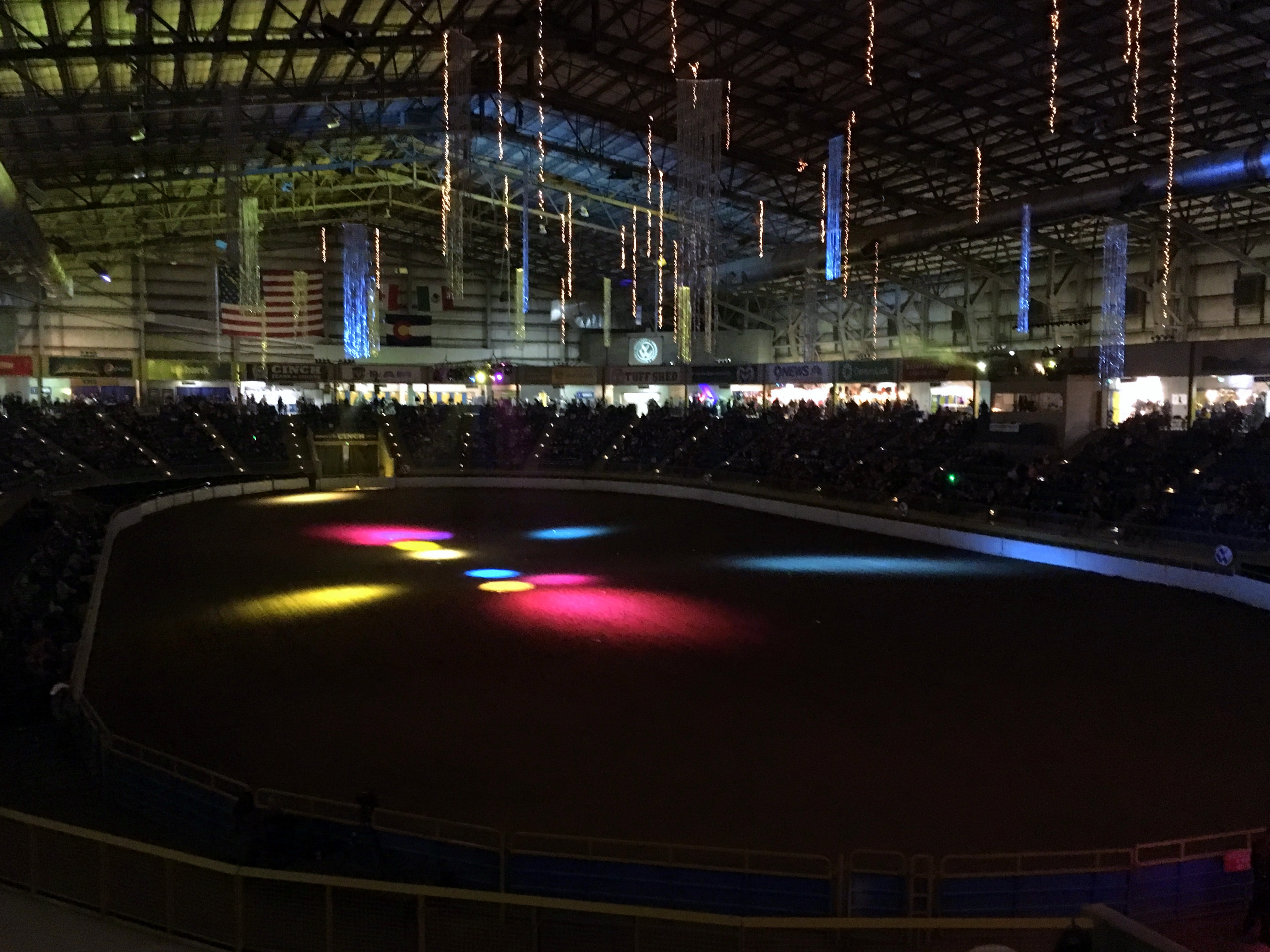 And then the show began. Some old fat guy with a gray beard and a buckskin coat ambled into the center of the arena and spoke through a mic that was hidden in a megaphone. 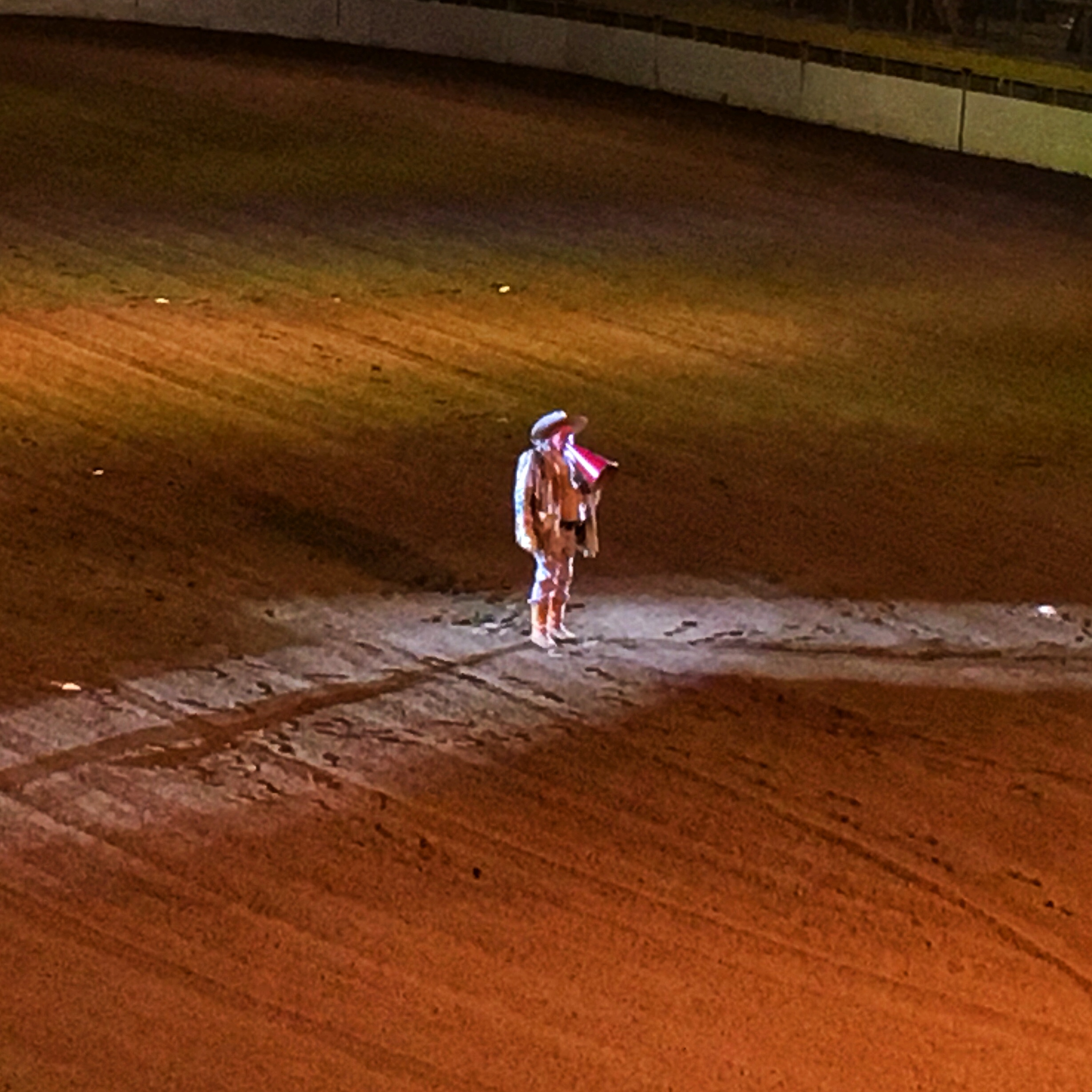 The stagecoach came out and did a lap. 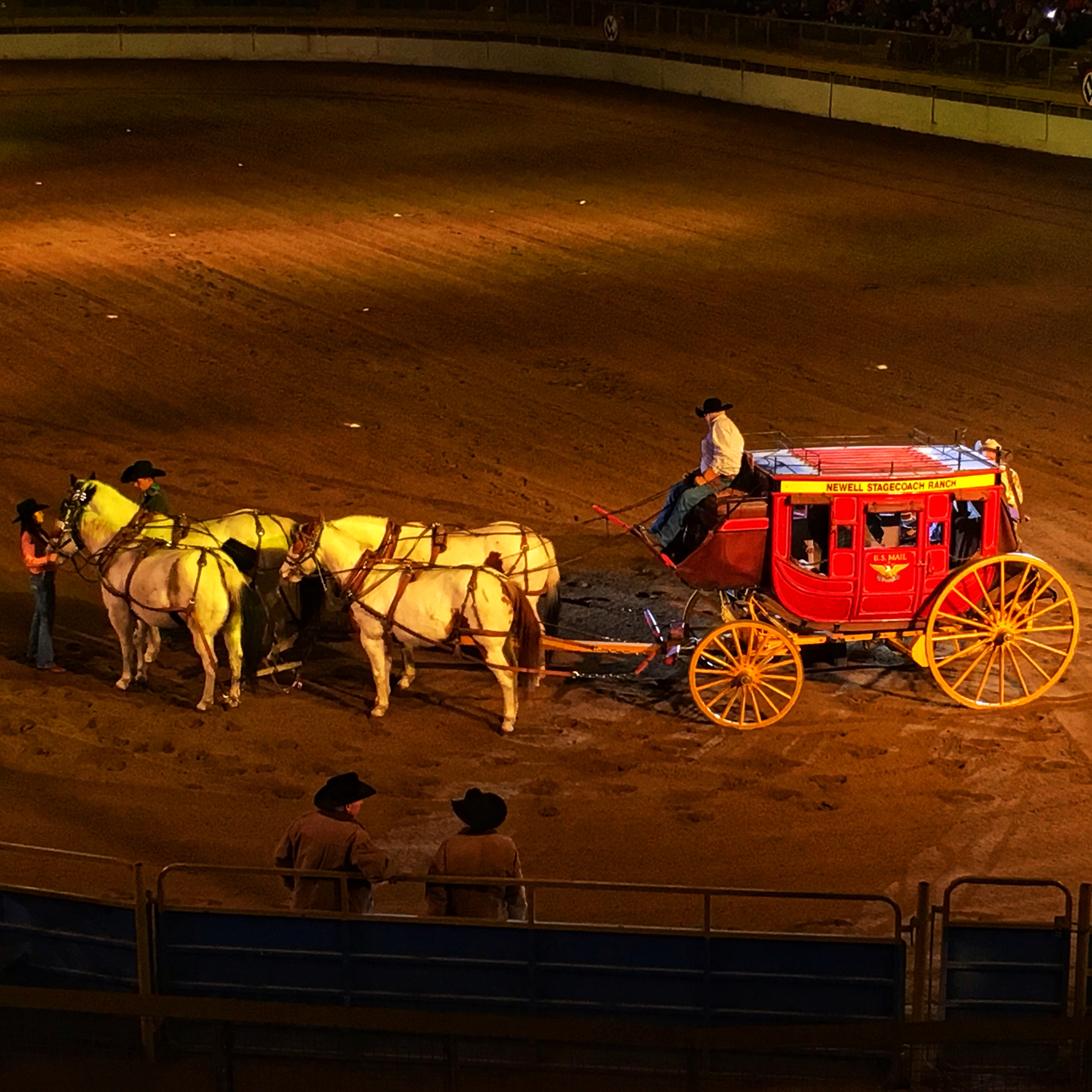 Three women on horseback rode out with flags and we sang the “National Anthem.” A fifth of the way through the program, and already, absolutely nothing had happened. In the background of my videos, you can hear the announcer with his “howdy pardner” accent. He kept saying “Thank you, friends.”

Next up was a guy whose horse only went in tiny circles. I guess this came in handy if he was out alone in the desert when Indians attacked. He could circle his wagons all by himself.

Four women walked out with ropes.  Two of them set their ropes on fire and spun them over their heads. I’m not sure this is a skill. The rest of the act wasn’t much more impressive.

Then came the first of two performances of the Indian dancers. The announcers kept referring to them as “fancy dancers.” I hope the Indians have a more impressive name for them.

Next came a troop of Cossacks—because there were a lot of them running around the West. They managed to pull off about 60% of the tricks they tried in slap-dash fashion. But I promise you, in this video, you’ll be much more entertained by what happens with the three horses standing in the foreground. Trust me.

Two women came out on horseback, portraying Annie Oakley and Lillian Smith who were supposedly fierce rivals as tricks-shooters in Buffalo Bill’s shows. Here, they rode down a row of traffic cones and popped balloons with BB’s I guess. They certainly couldn’t have been using bullets. 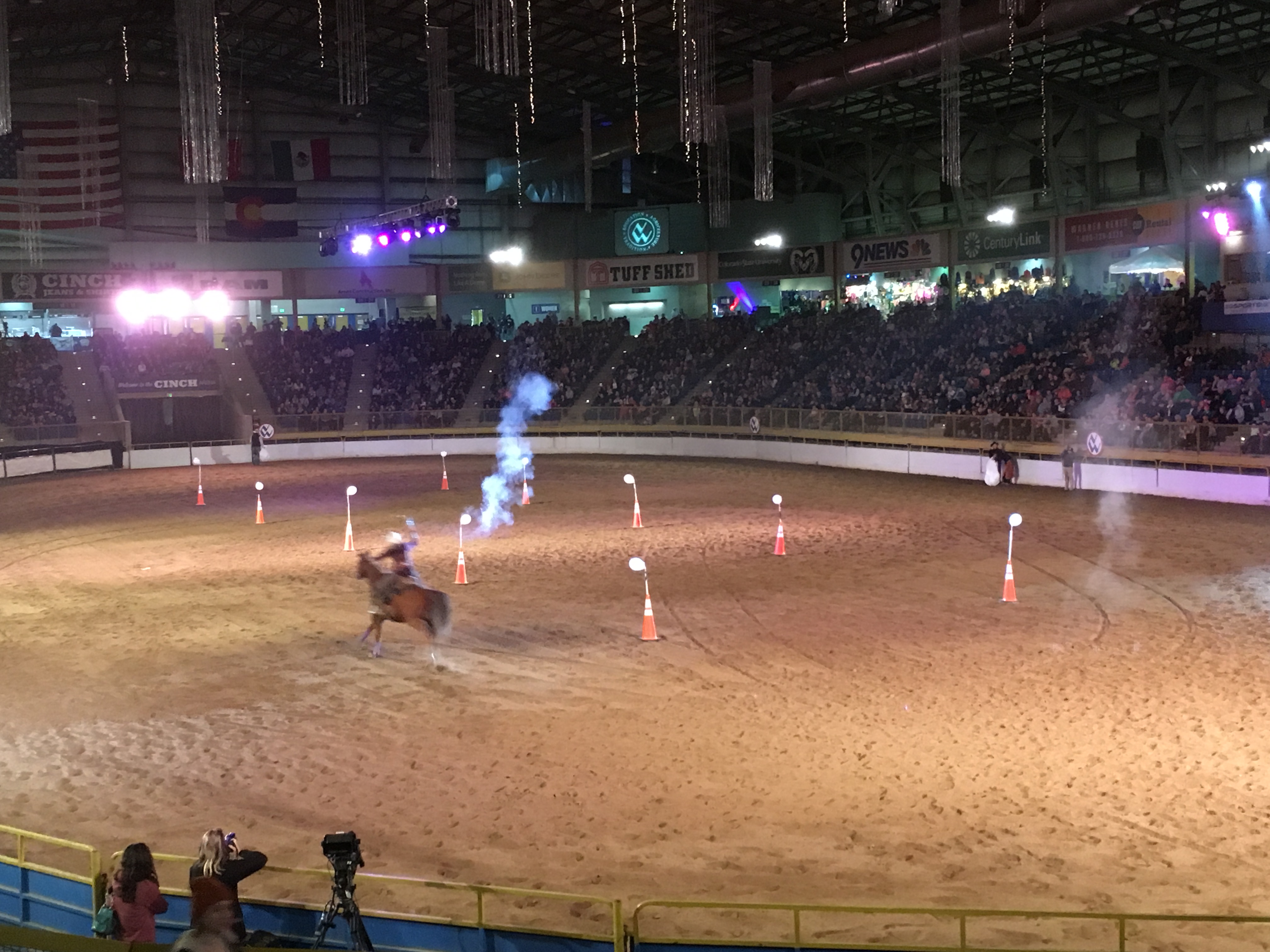 Next was an odd act—three guys making their horses take tiny steps and a bunch of kids who decided just moments before to try out the lasso for the first time. At least that’s what it looked like. The act was all called “Charros.” Keep your eyes on the kid in the white shirt in the front. And try not to notice the “above the belt” area of the guy in the dark coat to his right.

There was a lady who got a horse to do tricks even though it wasn’t wearing any harness. The tricks included exciting things like sitting down and walking around her.

We then heard a long, silly tale about a woman named Lucille Mulhall who, back in Buffalo Bill’s day, claimed she could ride a bucking horse. So they put her on a bucking horse and she rode it. Yes, folks. To demonstrate the thrill of this moment, two cowboys rode out with a third horse between them. A woman walked out and got on the middle horse. The cowboys let the horse go. It made a couple of bored hops, and then ran down one side of the arena. One of the cowboys rode after it and dragged the lady off the horse which wasn’t doing much of anything by this time. Without exaggeration, I could have done this “trick.”

Square Dance consisted of eight Mexican girls who square danced on horseback—to the Macarena. Since this song came out in 1993, this didn’t seem terrible authentic. Although the actual meaning of the song—about a woman who repeated cheats on her boyfriend as he’s being drafted into the army—does fit the “wild” part of Wild West Show.

The Fancy Dancers came out for another spin, this time with hoops. Then the one actually impressive act of the night—three young ladies who displayed trick riding.

This was followed by the world’s least-impressive cattle drive reenactment.

And then everyone came out to take a final bow. Even with all the performers in the arena at the same time, it seemed small-time. 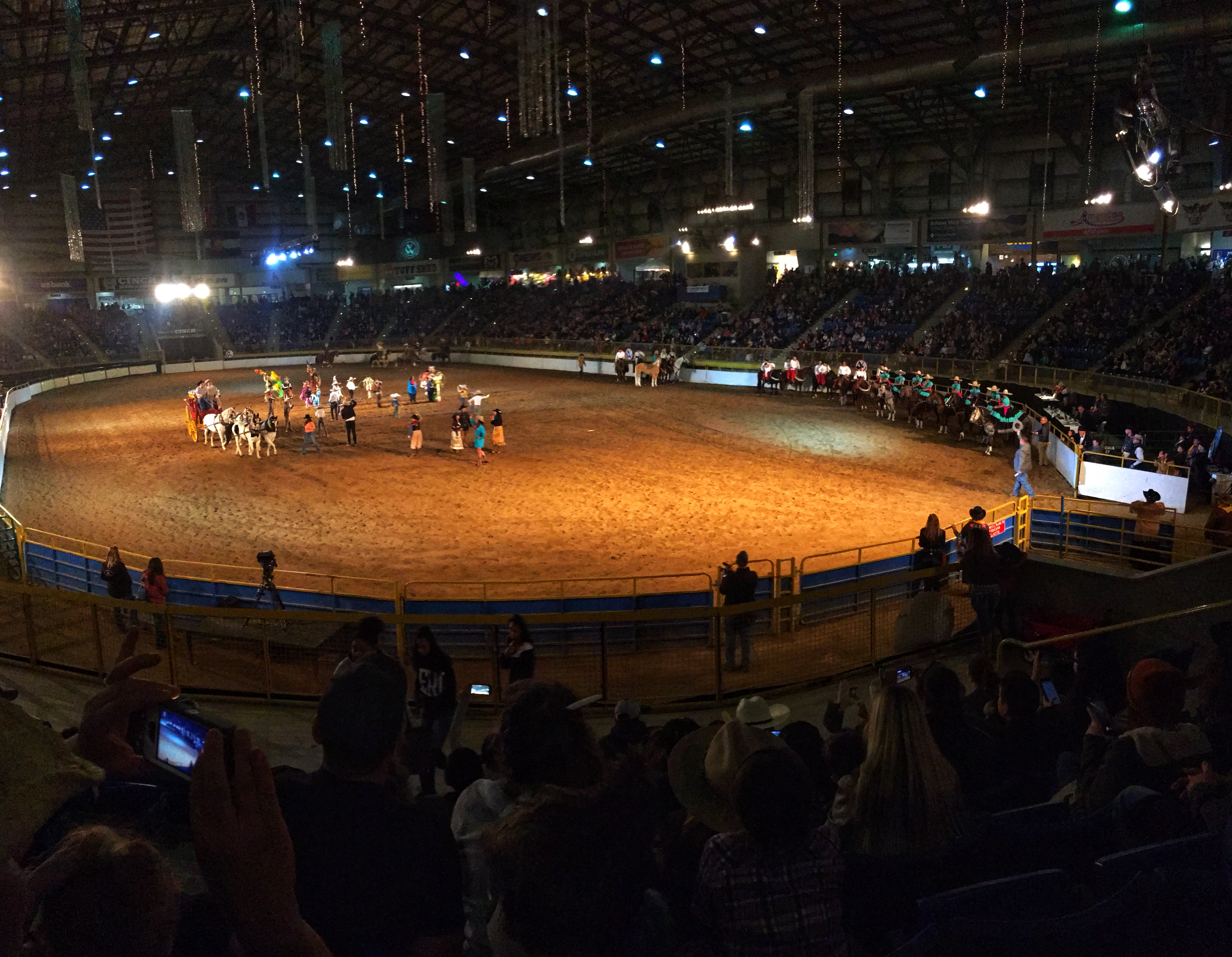 Who knows, maybe the original wasn’t all that flashy either. Maybe that’s why it didn’t last. But it was better than this. This tribute was mostly just sad.

This entry was posted in Performances, Pop Culture. Bookmark the permalink.