The Broadmoor is the place to be in Colorado Springs. It’s one of only three resorts to earn five-star ratings from Forbes, and the hotel has earned five stars for 54 straight years. It has hosted NATO meetings, golf championships and a lot of Presidents and other celebrities. And it’s way too pricey for our budget. 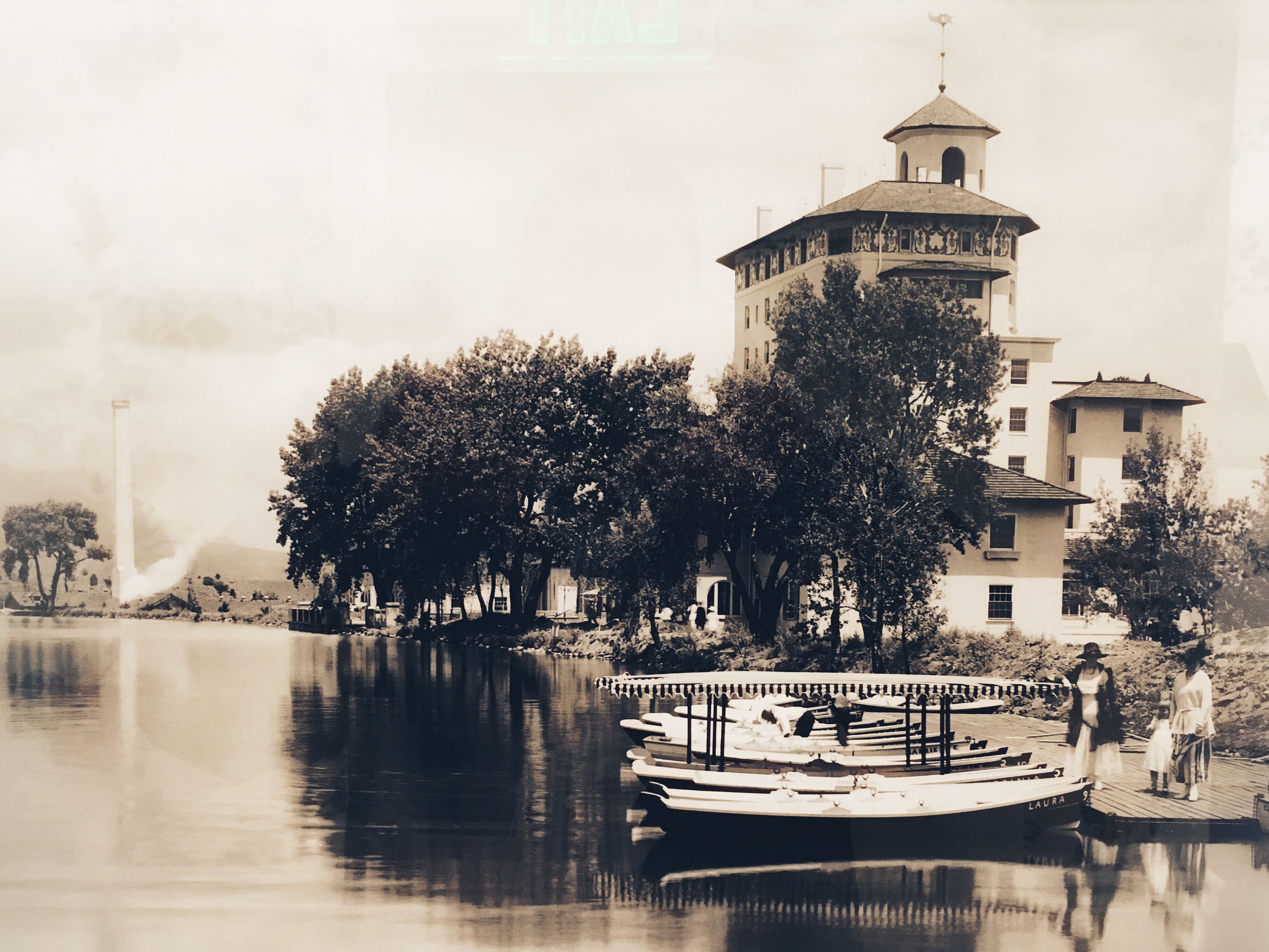 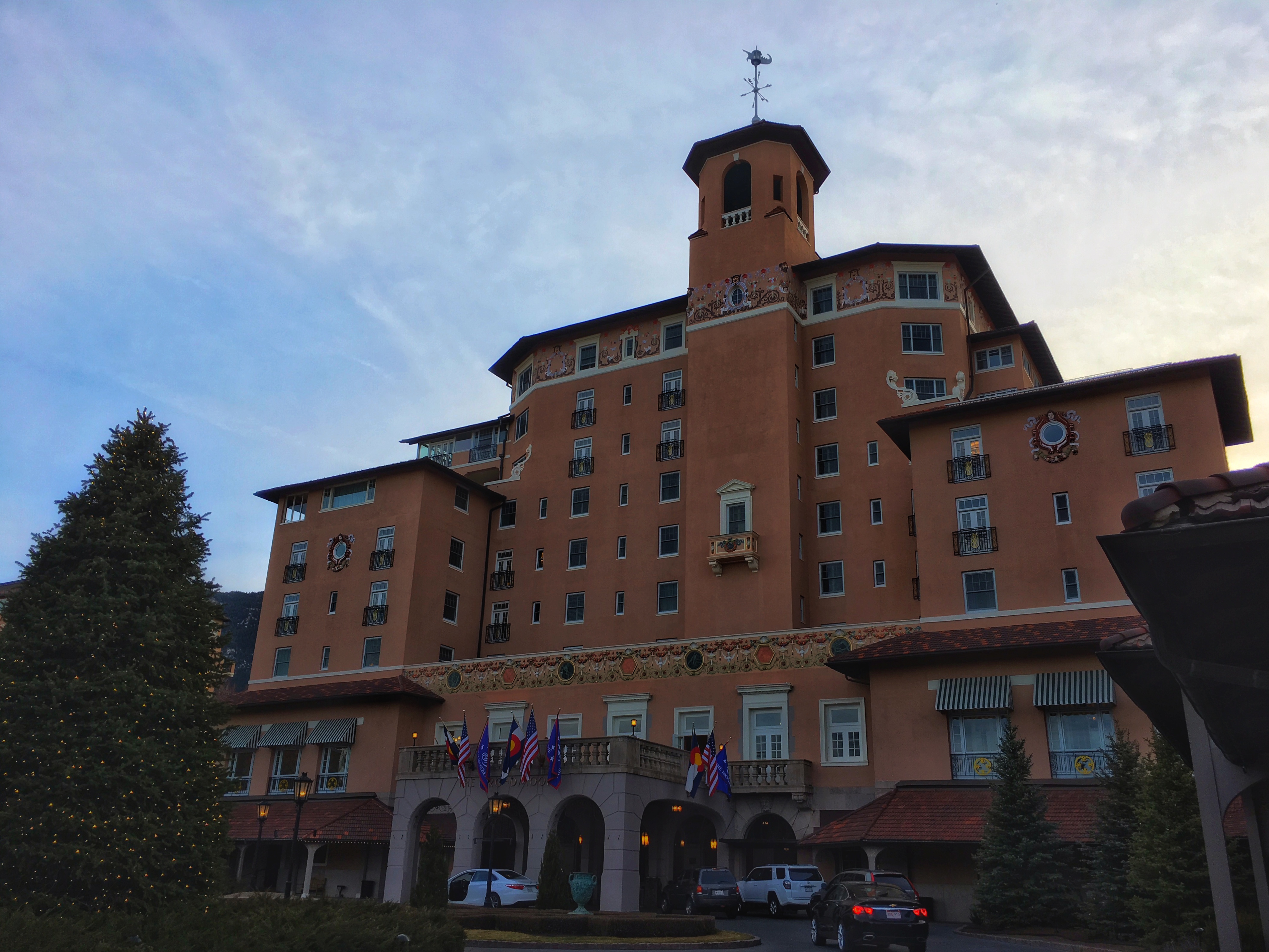 I reserved a room for the lowest price available. A few days later, I got a call offering us a nicer room for $10 more. I agreed, and I’m glad I did.

Check-in time was 4:00 pm on the Thursday we went. We arrived early, so we wandered through the shops. 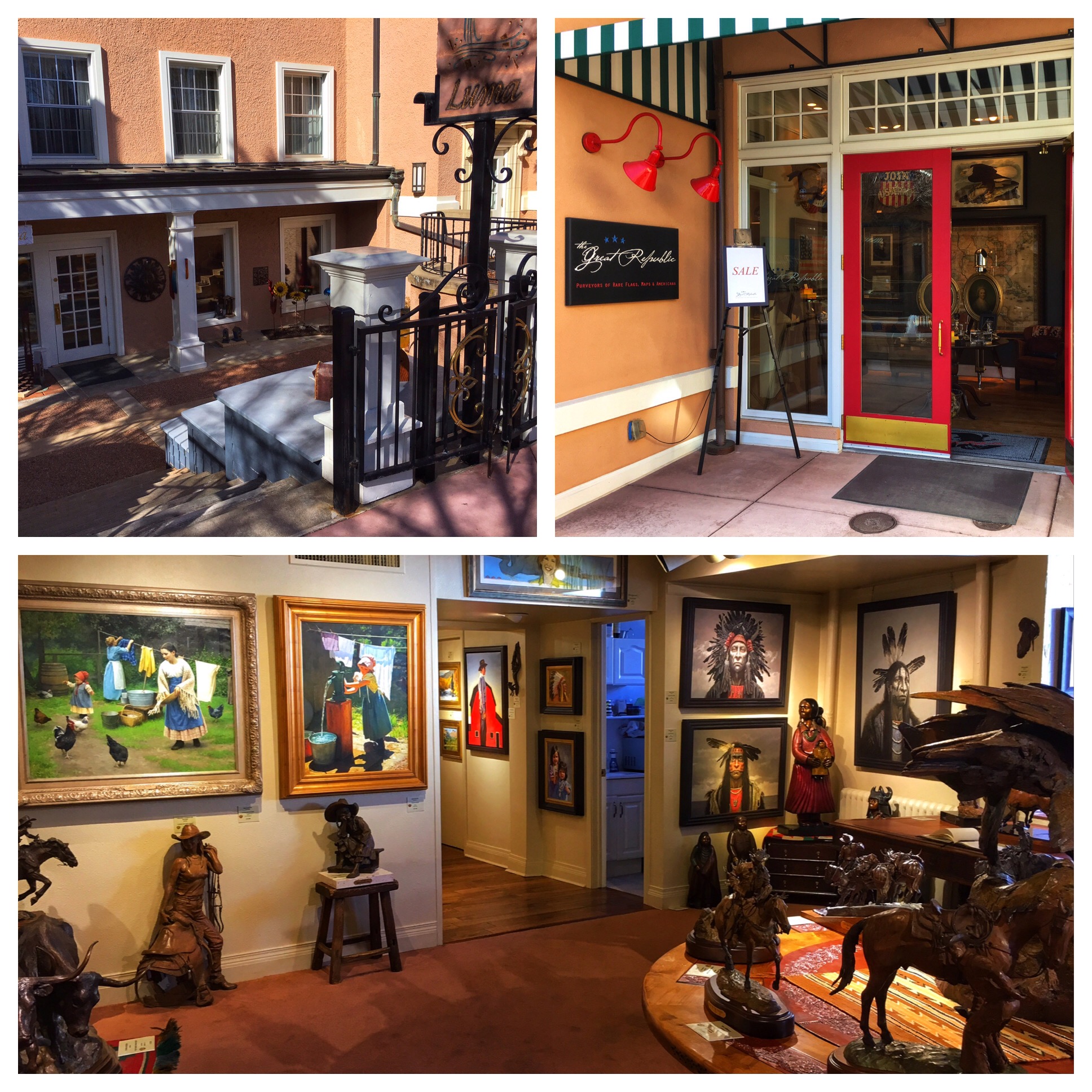 The first one carried an odd mix of women’s clothing, birdhouses, and kaleidoscopes. We bought one of the latter for our guest bedroom.

Another shop carried odd bits of Americana. I bought a lapel pin that read “The time is now: Reagan Bush.” It was $10. The girl behind the counter informed me that they were currently on sale. If I bought 10 or more, they were $8 each. I laughed out loud and told her I didn’t need $80 worth of lapel pins. She didn’t seem amused.

A shop full of Western art didn’t have a single thing under $440, and some of the painting were going for $18,000. We didn’t buy anything there.

In another shop, I bought a refrigerator magnet and tried not to laugh (and failed) as the woman carefully wrapped it in fancy Broadmoor wrapping paper and put it in a fancy Broadmoor bag.

We still had time to kill, so we wandered the halls of the hotel, looking at the furnishings and paintings. 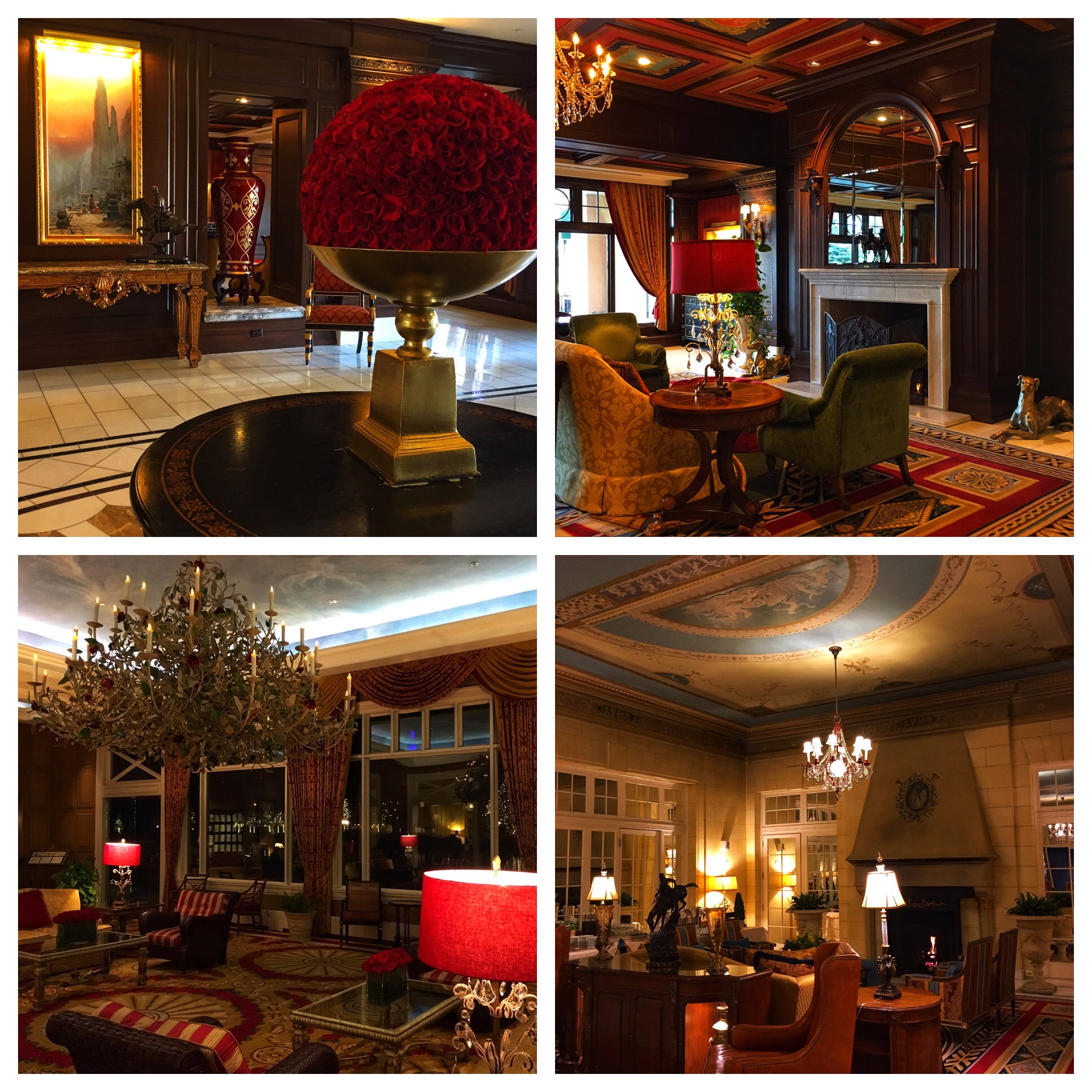 A long hallway was lined with photos of celebrities who had visited. I kept expecting someone to take our photos, but somehow we slipped through the cracks.

We also walked the perimeter of the man-made Cheyenne Lake. (I took some of these photos on Friday morning.) 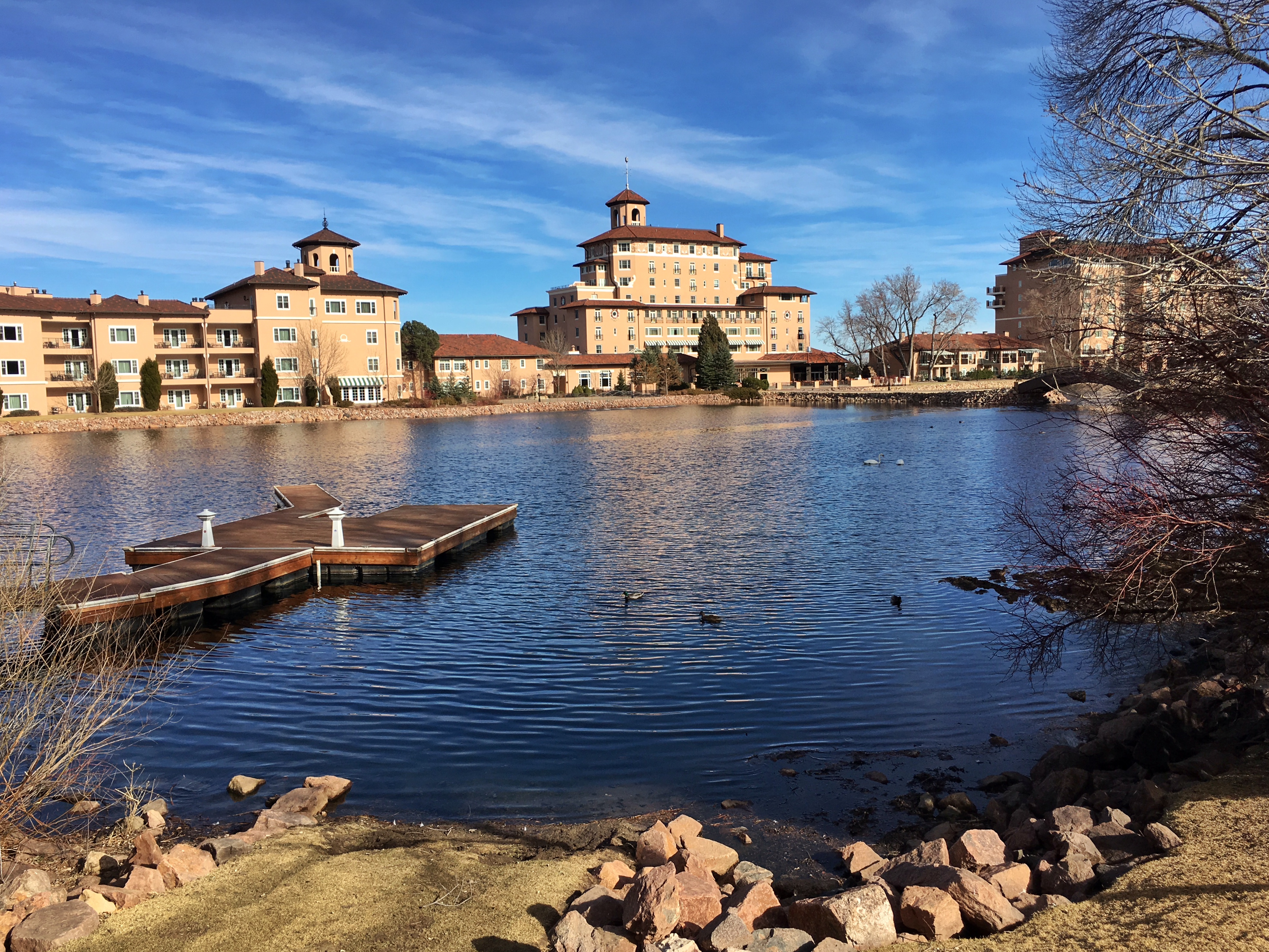 I had deliberately left our small shoulder bag in the car so that when we checked in, I wouldn’t be assigned a bellboy. No such luck. The girl who registered us banged her little bell and a right-and-ready young man rushed up and escorted us to the elevator. He volunteered to go get our luggage, but it would have taken much longer for me to tell him where we’d parked than it took me a bit later to go get our bag myself.

Our upgraded room was in the oldest part of the hotel, which was built in 1918. 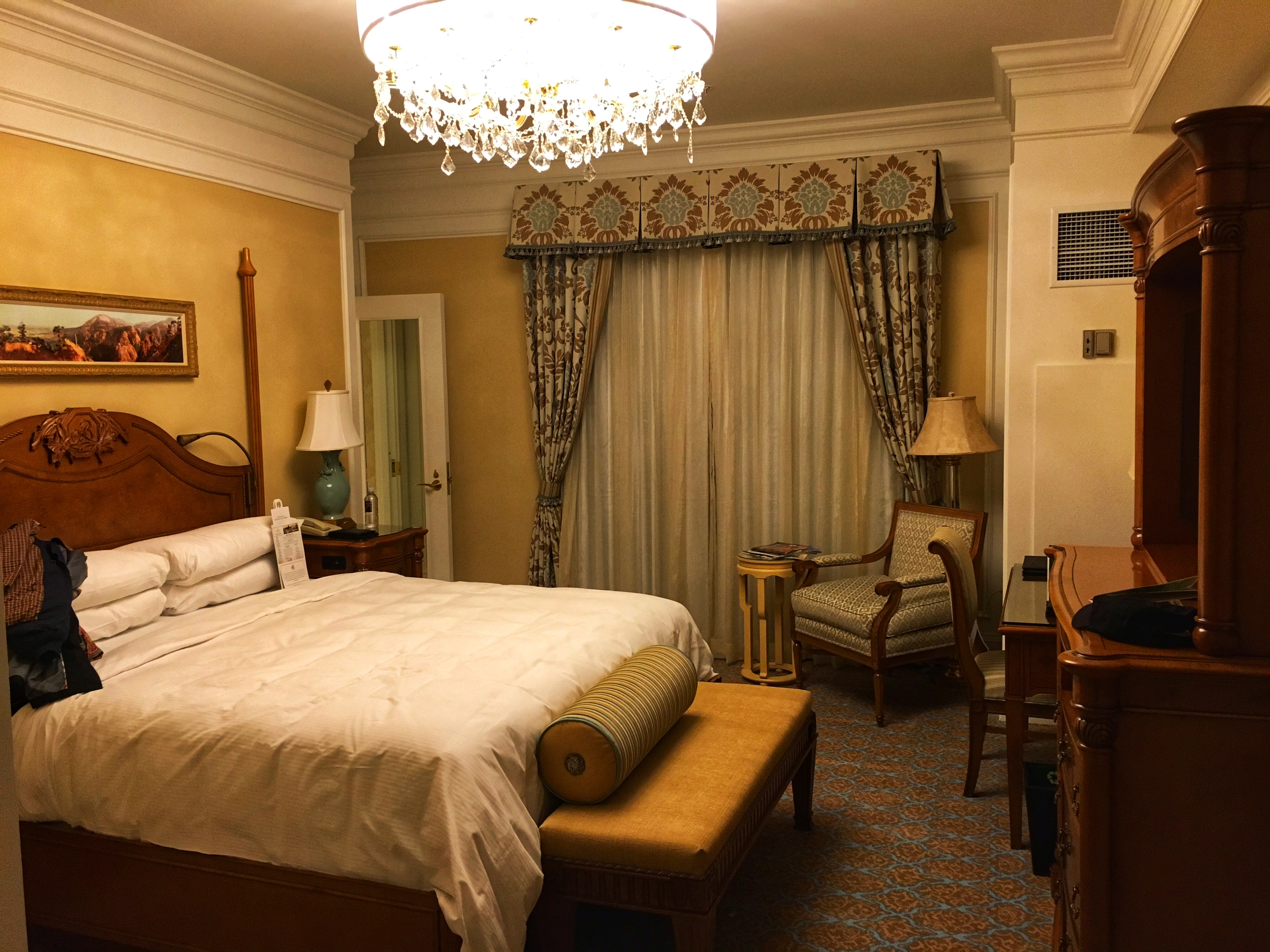 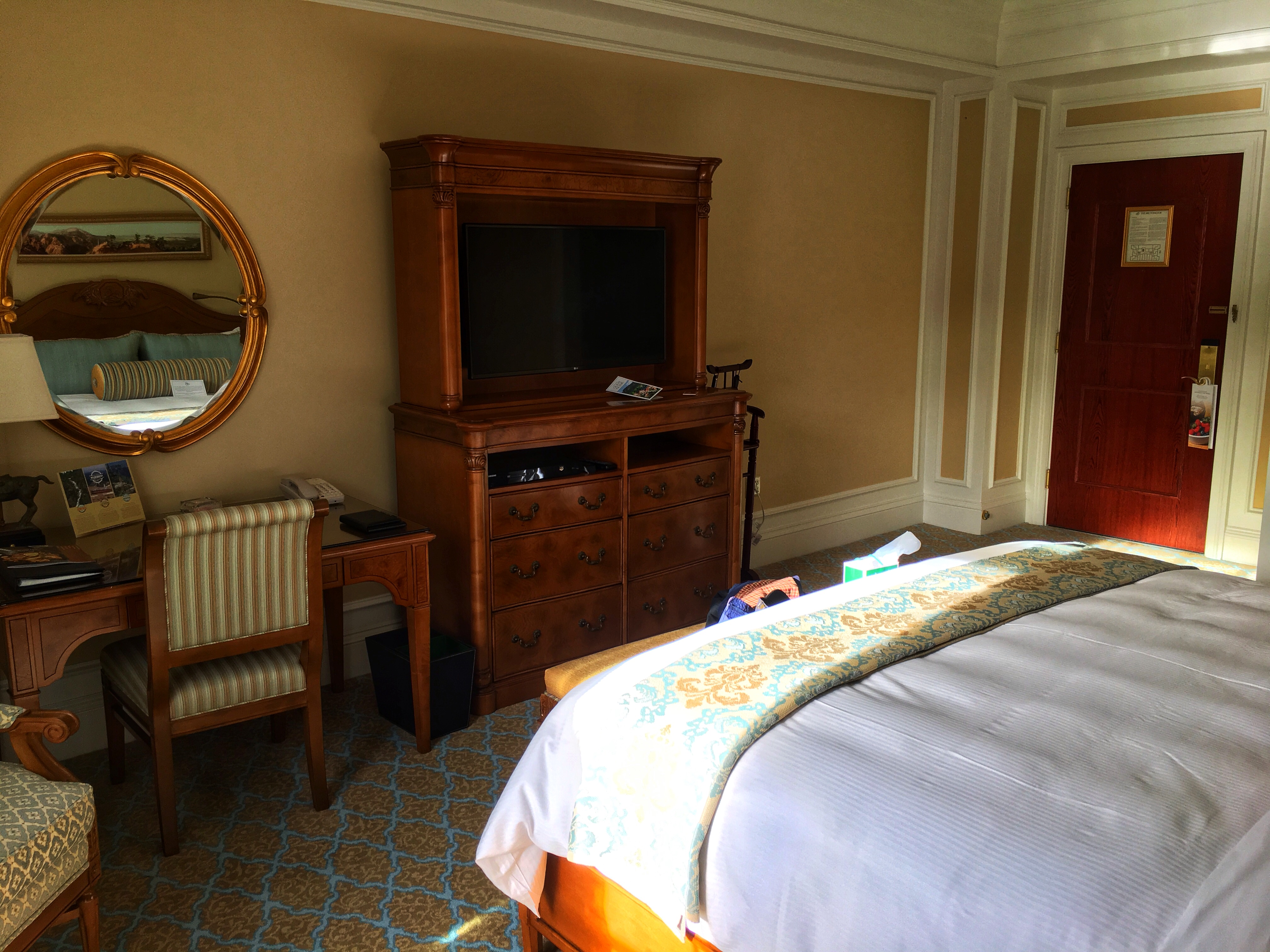 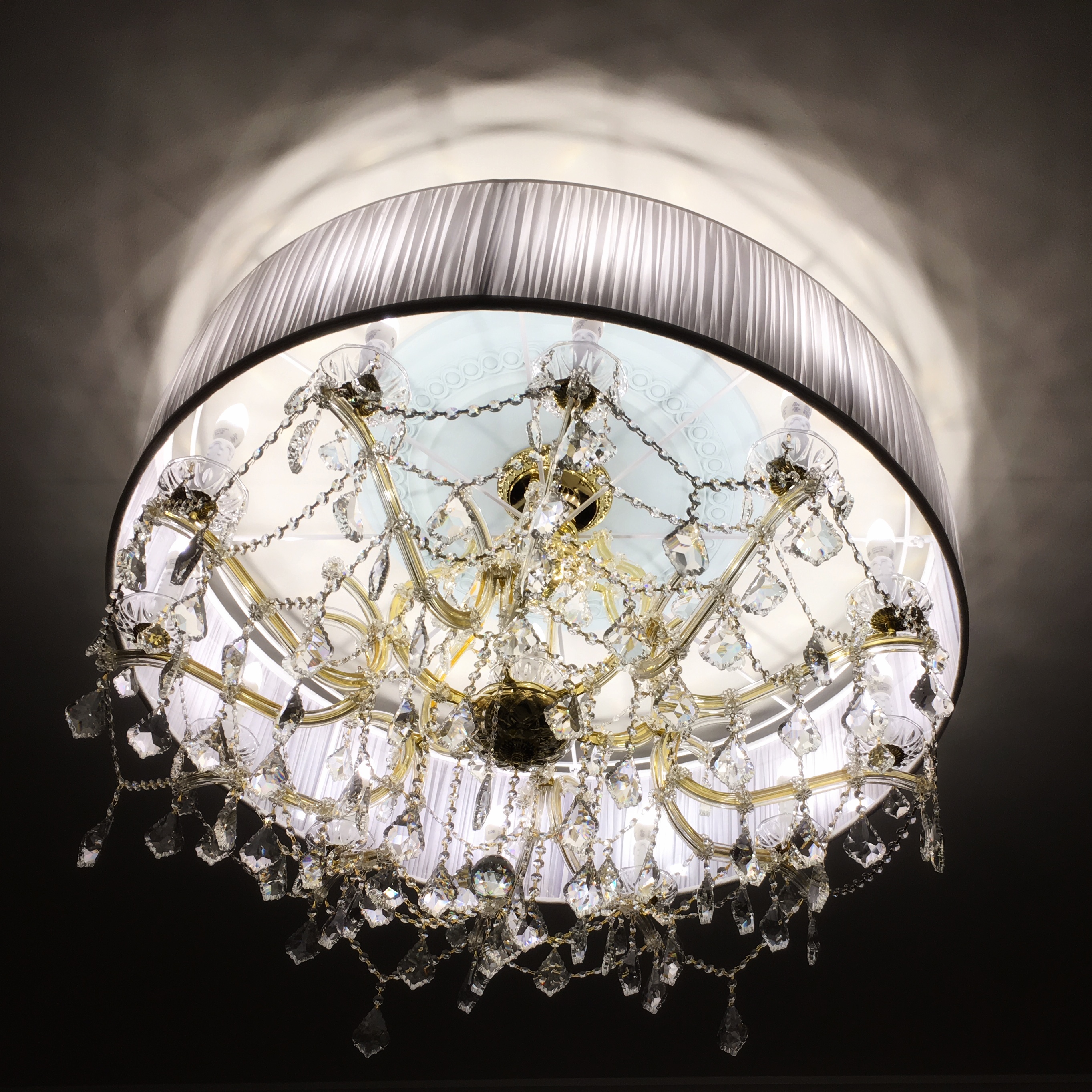 Note the phone next to the toilet. I thought it was the classy thing NOT to do that … 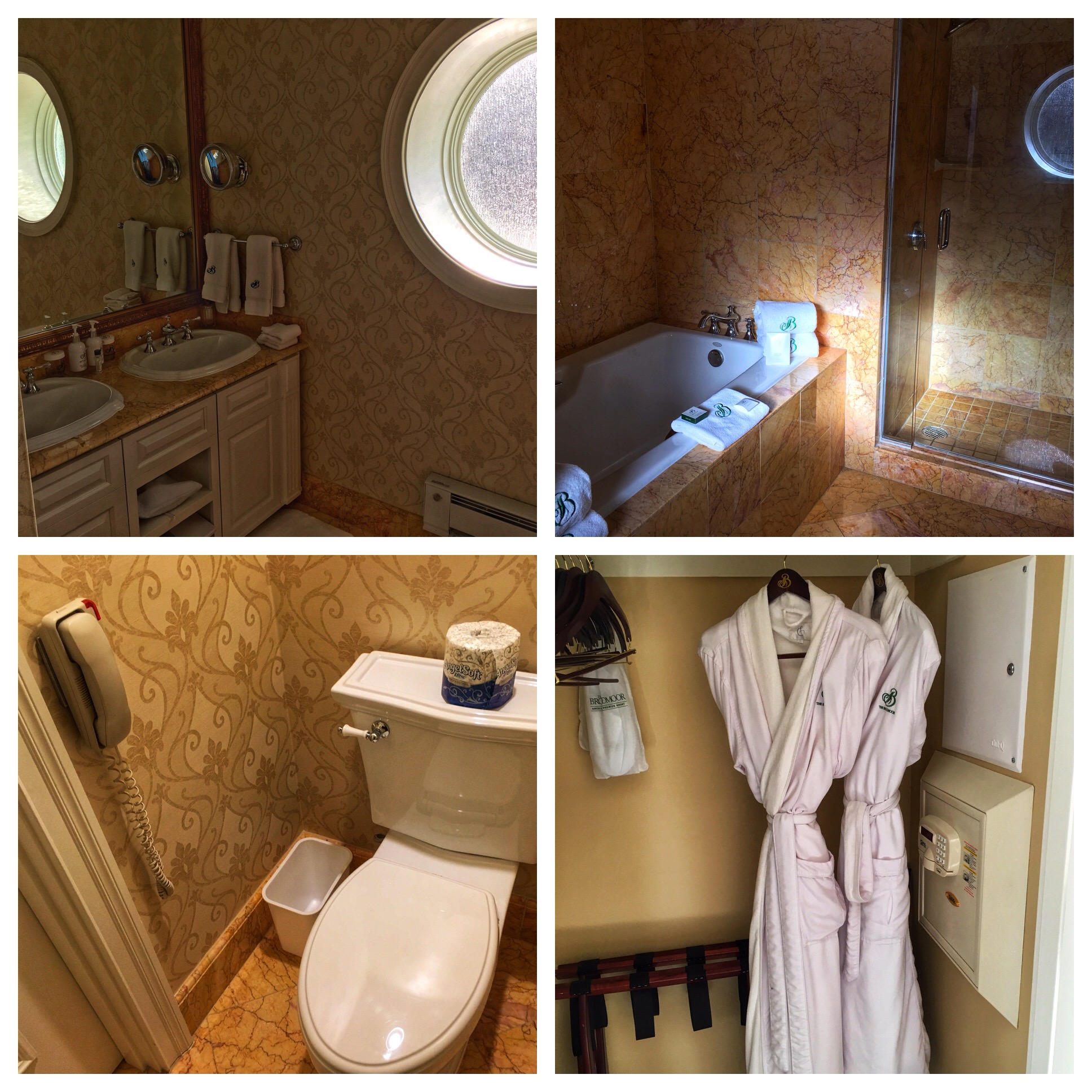 Our room even had a doorbell.

We faced west, overlooking the lake and the mountains. We had balcony doors, but no balcony. There was a railing we could, and did, lean on to enjoy the view and the shirt-sleeve weather.

There were swans and geese and several species of ducks on the lake. We relaxed until 5:30 and then walked down the main drive to the Golden Bee, an English pub that was dismantled and rebuilt on the grounds. We had chicken pot pie, which was basically a bowl of chicken soup with a biscuit floating on top, so I don’t know where the pie comes in. But it was really, really good, so no complaints. The fried pickle appetizer was also awesome. 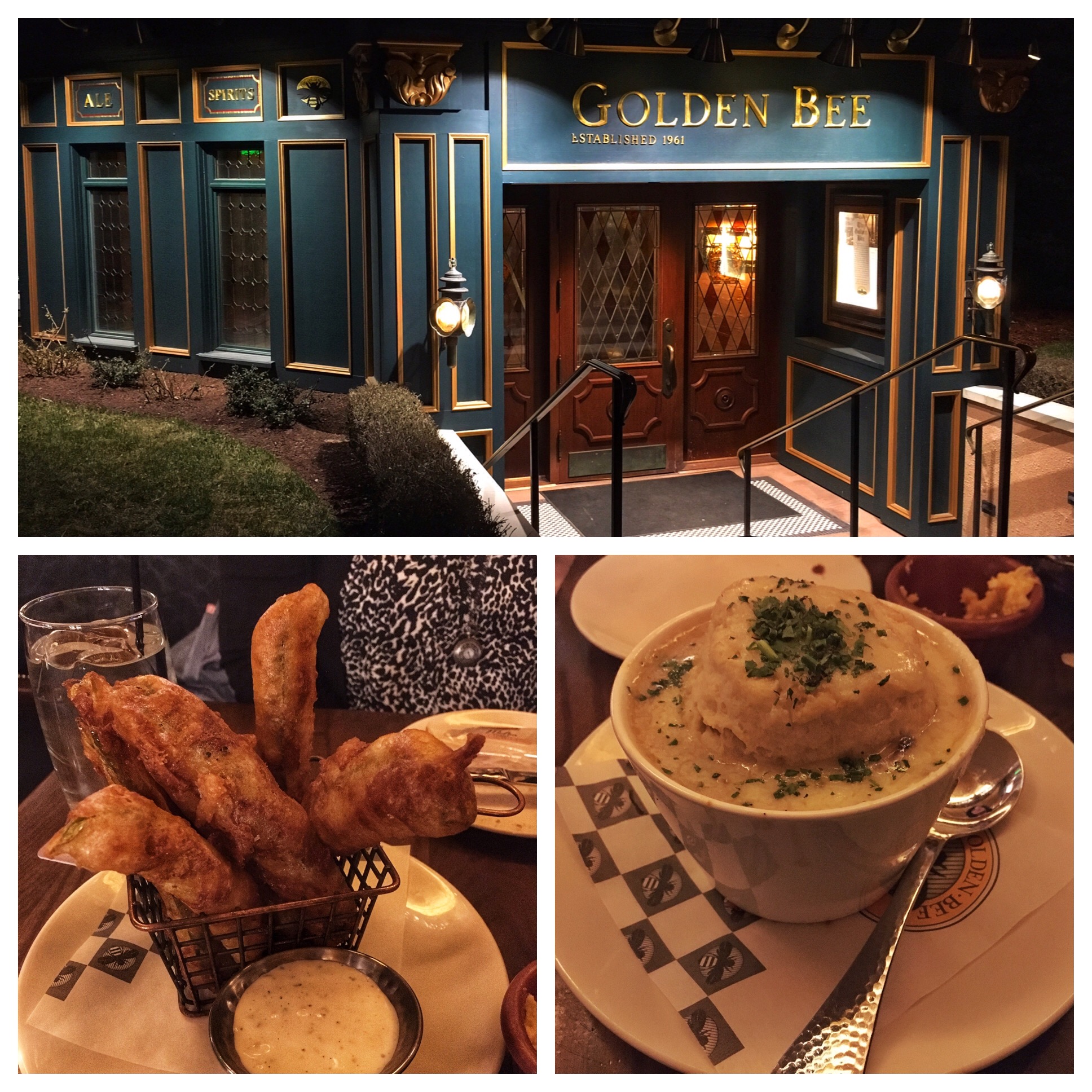 When we returned to our room, a young woman from housekeeping was inside. She had removed the one piece of paper we’d thrown in the garbage, turned down the sheets, and left two chocolates and two bottles of water on the nightstand. She asked if we needed more towels. At this point, we hadn’t used any towels, so we told her no. She wanted to know if we wanted her to get ice. I said no, and my wife hastened to explain that we were going back out right away.

And we were. Guests at the hotel can go to the Little Theater to see whatever movie is showing that particular evening. 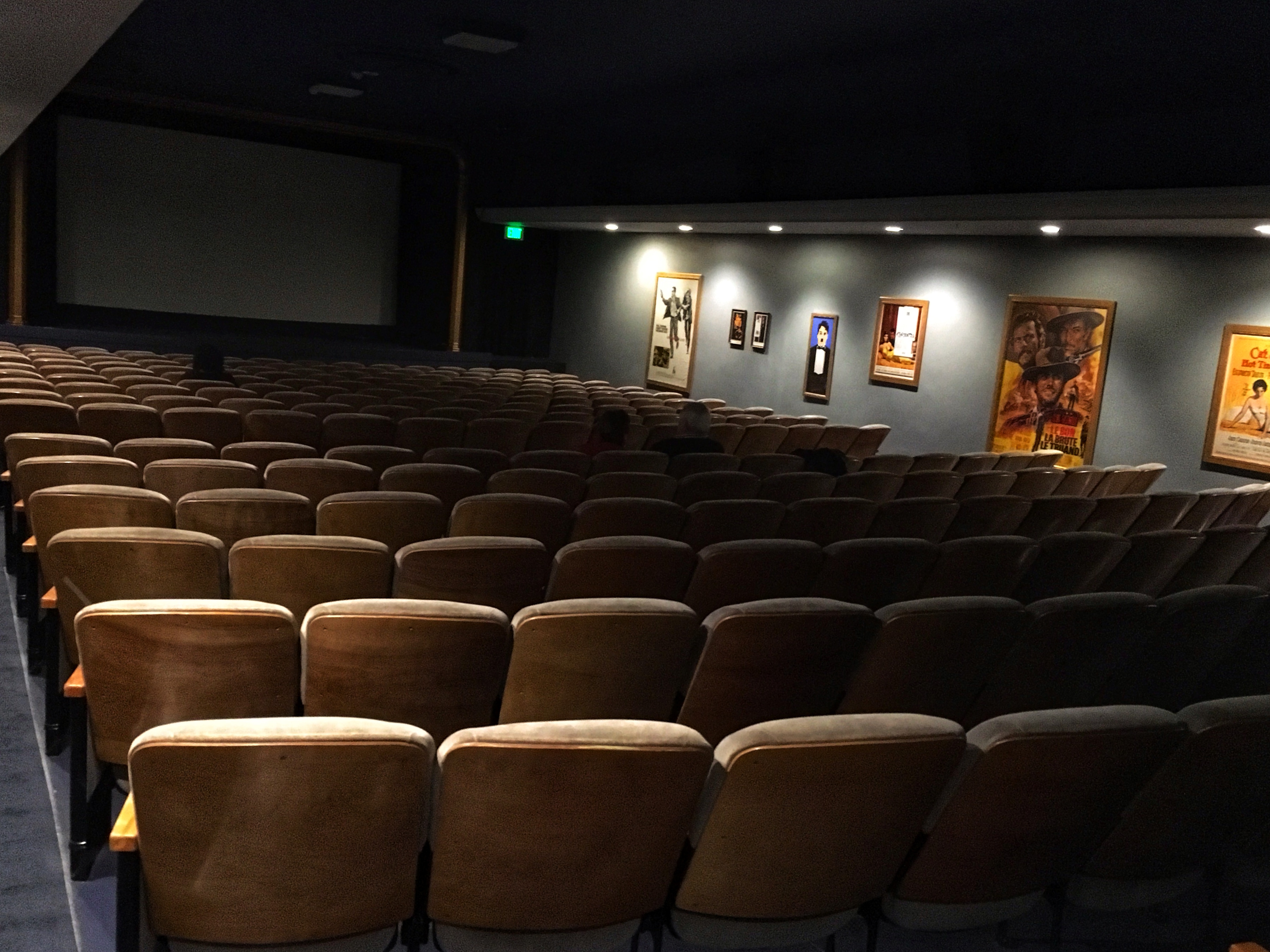 On our evening, it was Victoria & Abdul, about an Indian footman who conned his way to a ridiculous amount of influence over Queen Victoria when she was in her dotage. My sympathies were with her advisers who were dead set against the relationship. I didn’t enjoy it much, but it was free and part of the experience, I guess. 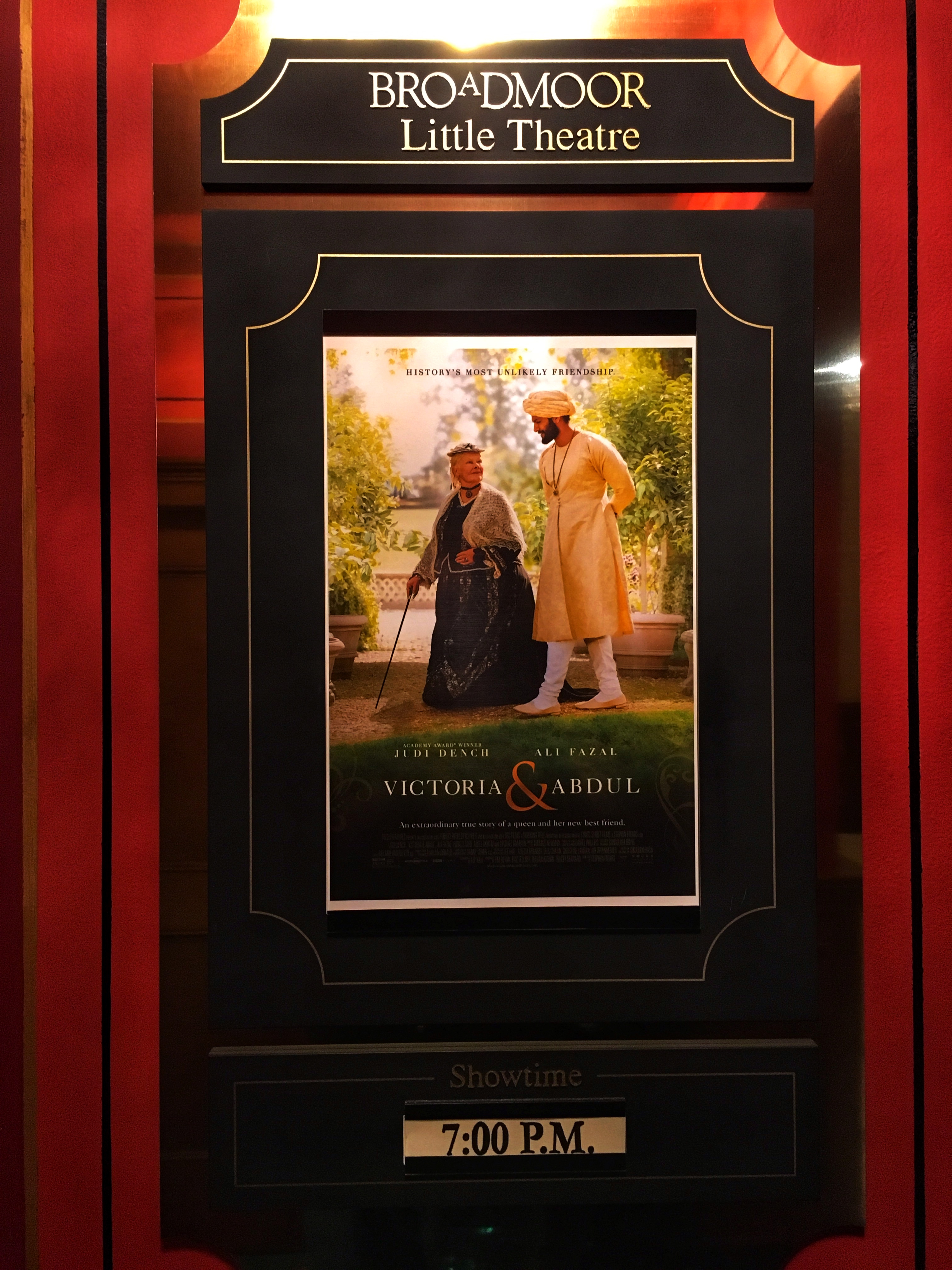 At night, the grounds are lit with thousands of lights. 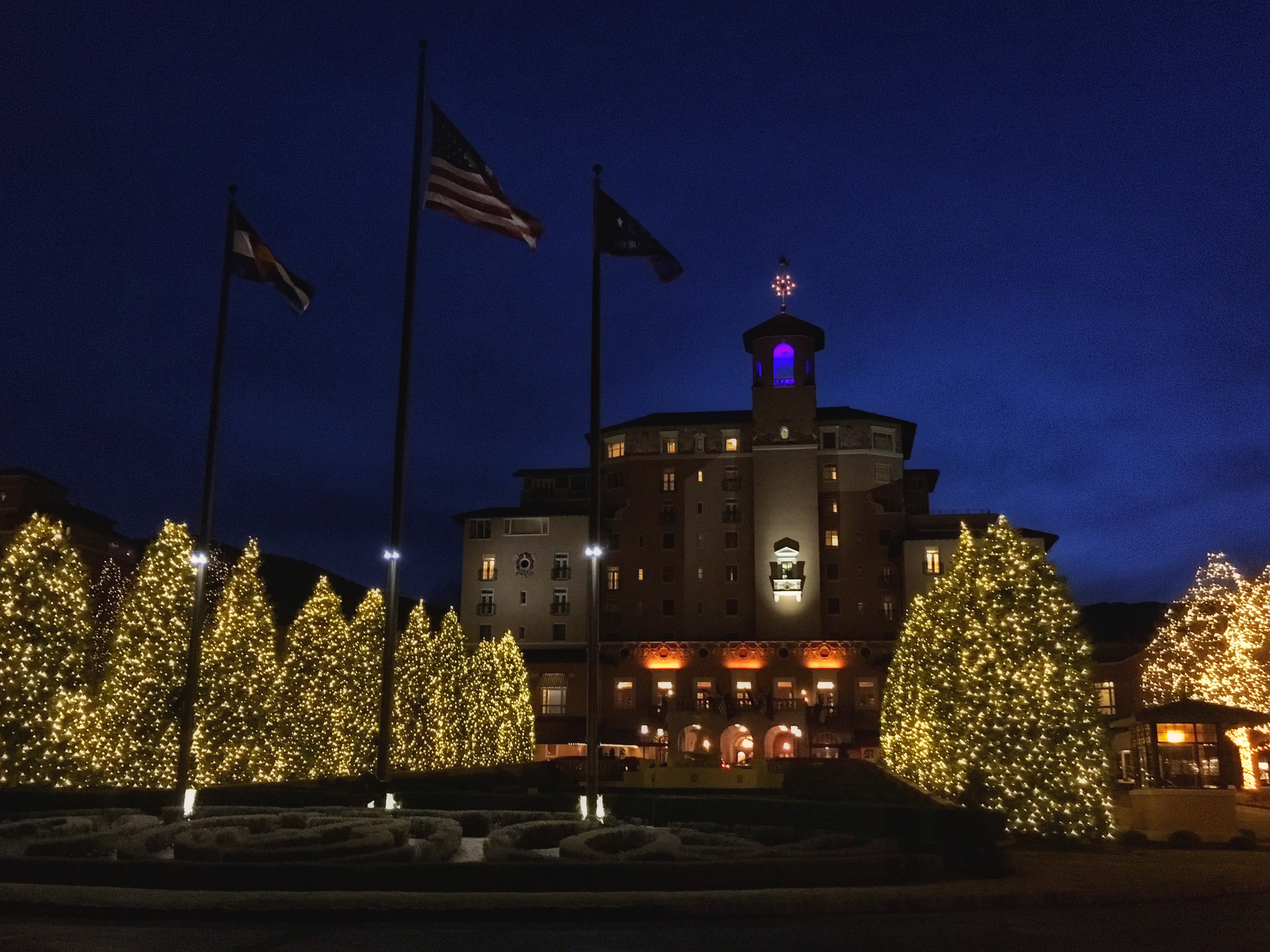 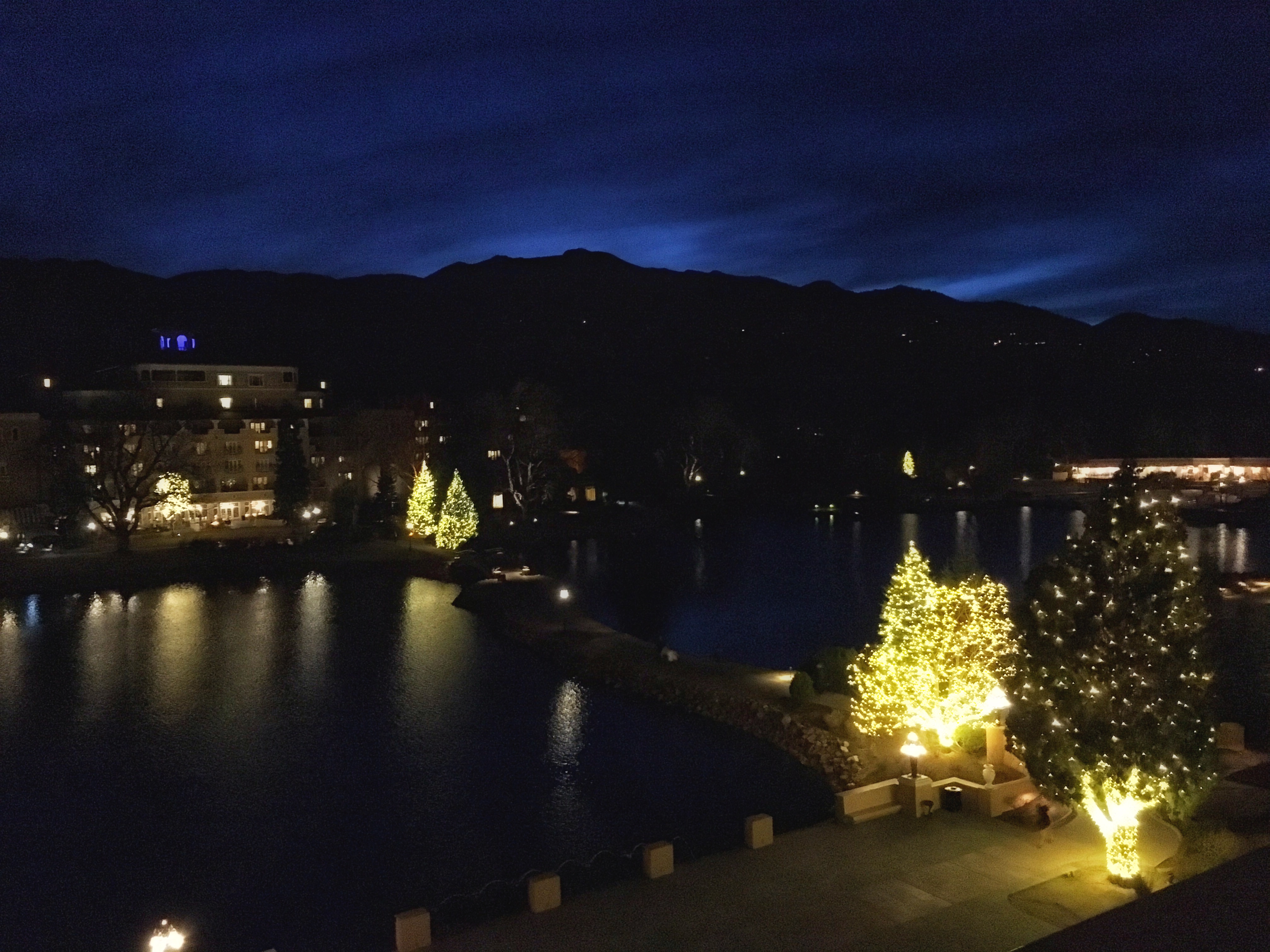 I got up on Friday morning a bit later then I wanted to and missed first light on the mountains. I set my phone on the ledge above the patio doors and took a time-lapse movie. You can see the swans and various ducks bobbing about, and, at 1:38, you can see a herd of Mule Deer casually stroll along the far shore.

It was another pleasant day, so we opened the doors and enjoyed the view for a couple hours. 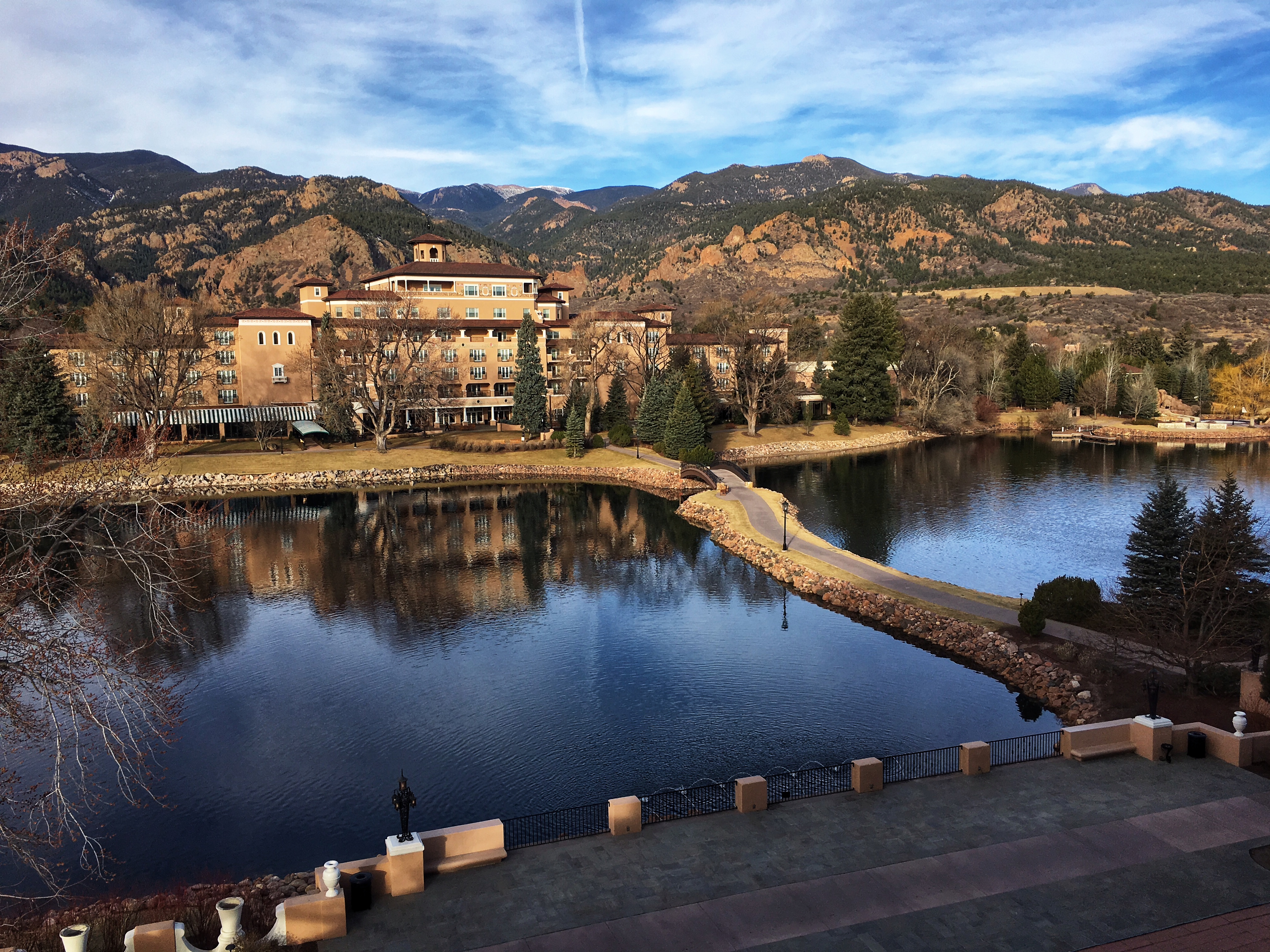 Mid-morning, we walked across the causeway to the other building and ate breakfast at the Natural Epicurean, a pastry bar. 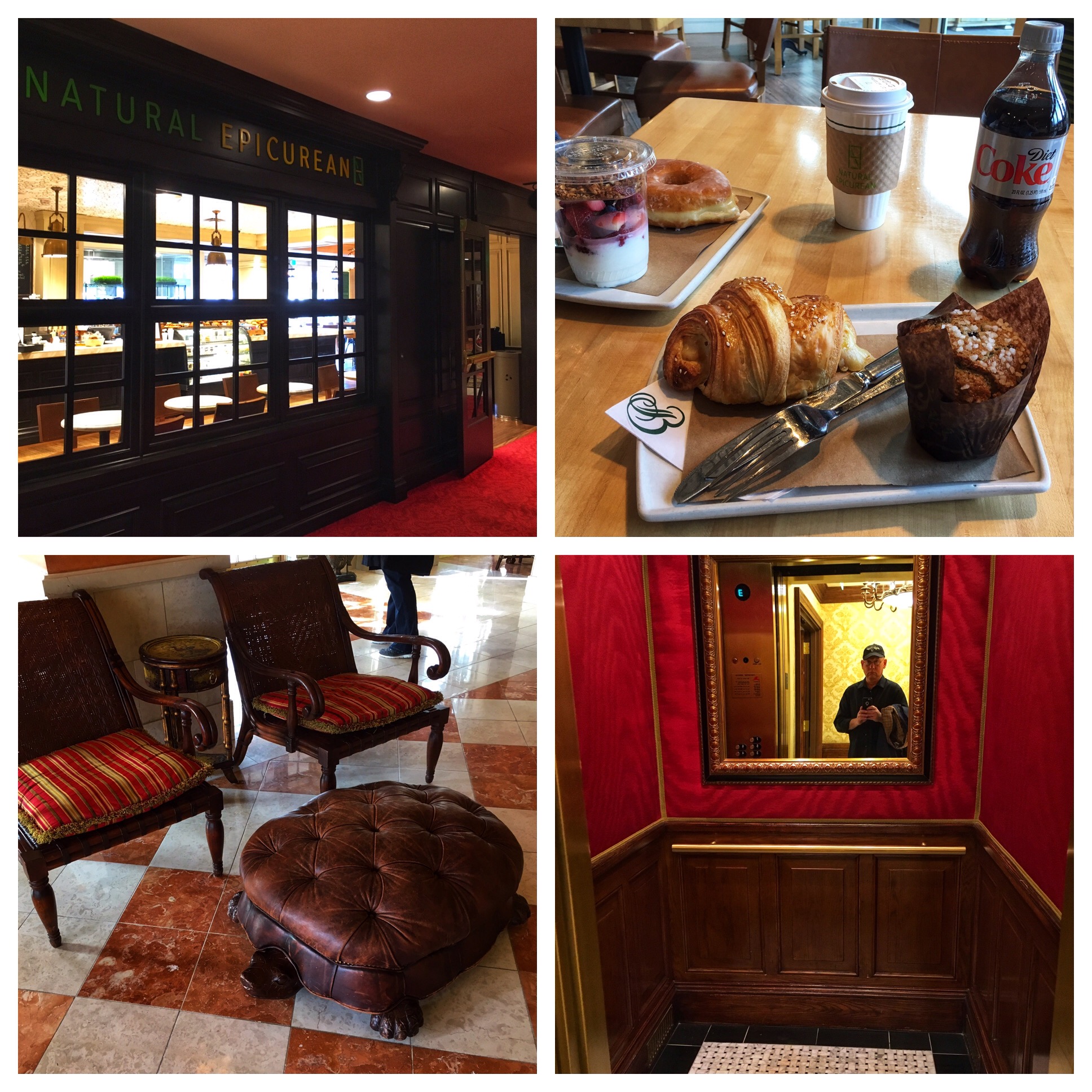 In an earlier photo, you may have noticed the large round window in our bathroom. This enabled us to find our room from the outside—it turns out we were in one of only two rooms on the entire west side of the building with a window like that. 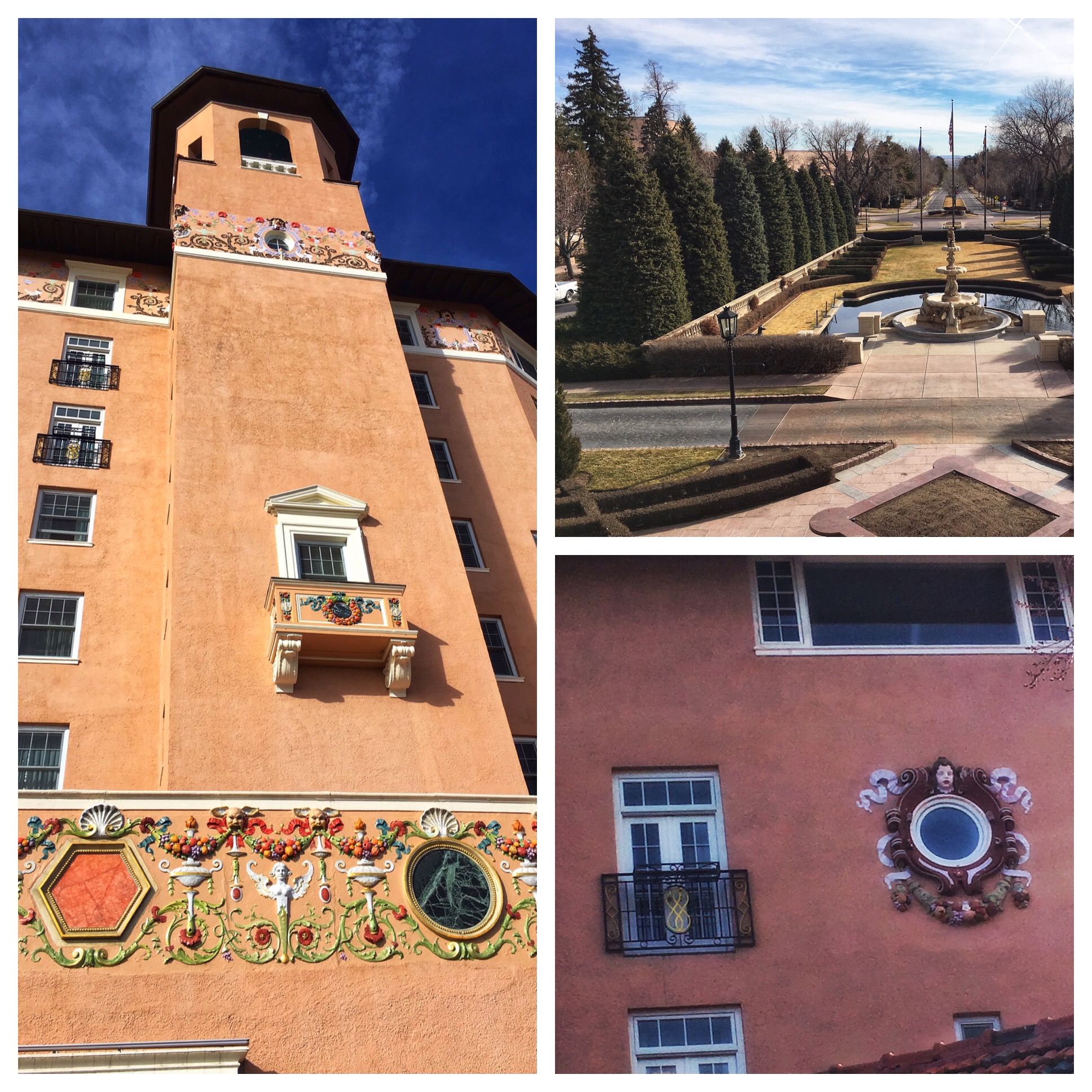 We also found a balcony at the front of the hotel that overlooked the drive and also gave us a good view of the designs on the main tower.

It was indeed a slow period. I’m pretty sure that between 60% and 70% of the people we saw were employees.