These seven movies starring Bob Hope, Bing Crosby and Dorothy Lamour were popular especially during the 1940s. They were short on plot, but notable for their gags, ad-libs and incidents of breaking the fourth wall (when an actor talks directly to the audience). They were also satires of popular movie themes of the time. 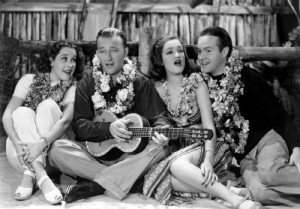 Road to Singapore (1940) — Crosby is Josh, a rich heir who decides to leave his spoiled life and bum around the world with his buddy Ace (Hope). They meet Mima (Lamour) on a South Seas island and both fall in love with her. — 6

Road to Zanzibar (1941) — Chuck (Crosby) and Fearless (Hope) run carnival side show attractions in Africa. They run into two women, Donna (Lamour) Julia (Una Merkel) who con them into taking them across the continent. Along the way, the run into leopards, gorillas, and a tribe of cannibals— and Donna falls for Chuck. But by this time, they’ve spent all their money and need to put on carnival side shows to get back to America — 7

Road to Morocco (1942) — Crosby and Hope are carefree castaways on a desert shore who find an Arabian Nights city, where they compete for the luscious Princess Shalmar. — 7 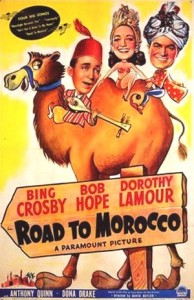 Road to Utopia (1946) — The two play swindlers on the run from the law who end up searching for gold in Alaska, using a map they took from two crooks. The map really belongs to Sal’s (Lamour) father, and she’s along to try to get it back. — 7

The Road to Hong Kong (1962) — Crosby and Hope are mistaken for spies and sent on a mission to the moon. Dorothy Lamour makes a cameo appearance, but is replaced by Joan Collins as the love interest. This one constantly breaks the fourth wall — 6

In 1977, there were plans to make an eighth movie in the series — Road to the Fountain of Youth, but Bing Crosby died of a heart attack before production could begin.

I’ve seen them all, a few of them multiple times, and while I’m always aware that I’m watching something very silly, I usually laugh a lot too.