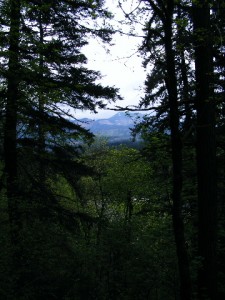 As we walked along the trail above Eagle Creek, a swarm of Violet-green Swallows cruised just above the tree tops. When I reached a gap in the forest, I noticed that at least one of them was an imposter — a Vaux’s Swift. They are a bit smaller and paler than Chimney Swifts, but otherwise look very similar. My primary identification point was location — Chimney Swifts don’t occur on the West Coast.

When we got down to the road, I found the swift again, just to make sure. Later in the week, I saw some by our hotel on Hayden Island and then got great looks at several as they flew past at eye level when I was at the Portland Women’s Forum State Scenic Viewpoint. (More on this oddly-named place in a future post.)