Because of our conversation about the raven, the ranger got the impression that we were only interested in birds. He shooed us out of the visitor center and told us to walk the trail to the Johnson Settlement, a nearby section of the park that contains the cabin and farm of Sam Ealy Johnson, Lyndon’s grandfather. He was a rancher and who drove cattle up the Chisholm Trail to Abilene, Kansas.

There were birds around, the most exciting being a Bewick’s Wren, but we were as interested in the cactus that sprouted everywhere and the two Texas longhorns in a corral. A sign on the fence read, “Keep off the fence. Longhorns are dangerous.” I wandered over and took a couple shots of this guy. 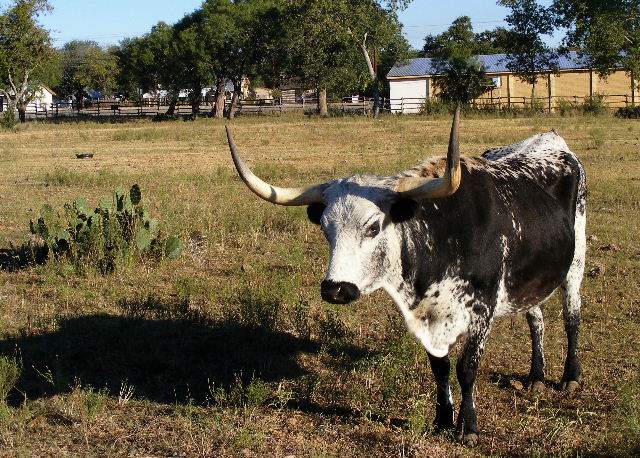 I thought it looked like he was wearing too much makeup. Maybe he was going for the Gothic look. He 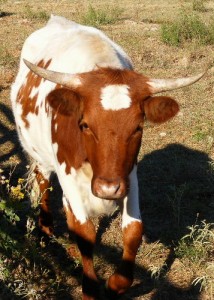 just stood there and stared back at me until I leaned over the fence to get a picture of his friend. As soon as I did, the Gothic cow headed right for me. I took a quick shot of the brown one and backed off.  Hey, if he want’s to look goth, who am I to argue.

I picked up a bud that had fallen off a cactus and spent the next hour trying to squeeze an invisible spine out of my finger. A little while later, I got a barbed burr embedded in the palm of my hand that stung like mad when I yanked it out. I was in Texas indeed.

We wandered about the barns, looking at the horses and chickens and wondering why obnoxious white tents were set up all about. It was a challenge trying to keep them out of my photographs and I wasn’t entirely successful. 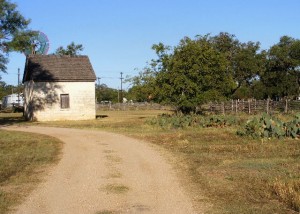 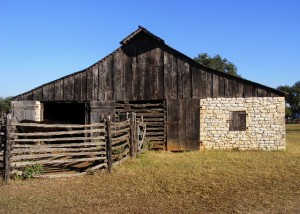 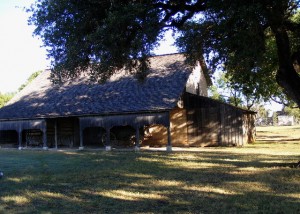 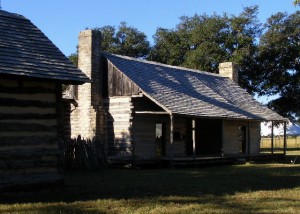 The Johnson cabin was built in the dog-trot style. That means that the two rooms are separated by an open space that is roofed but otherwise open to the weather. Supposedly the name came about because a dog could trot through the opening, but frankly, that seems rather silly to me. Why a dog? A cow or an armadillo or even a squirrel could trot through there just as easily. For that matter, I considered trotting through it myself.

There was an exhibit building with displays on the Chisholm trail, but it was underwhelming and besides, I’ve already told you what our feelings are about reading stuff in museums.