The debate was held on the Jonesboro Fairgrounds on September 15, 1858. Douglas, who chose the locations for the debates, picked this tiny town because he figured that Lincoln’s views on the expansion of slavery would get him in trouble with the pro-slavery residents of Southern Illinois.

The statues of Lincoln and Douglas are life-size. The site is located in a pretty little park on the outskirts of town. The building in the background is a visitor center for the Shawnee National Forest. 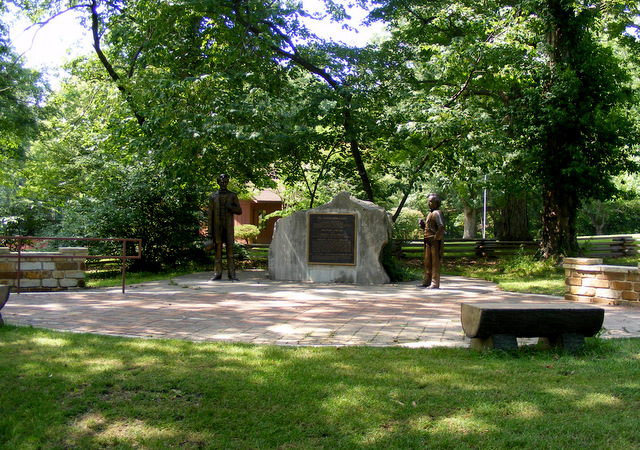 The plaque on the rock reads:

On The Afternoon of September the 15th, 1858, upon this acre in the Jonesboro Fair-grounds and as rival candidates for the United States Senatorship from the State of Illinois, Abraham Lincoln and Stephen A. Douglas met in the third joint debate of seven Lincoln – Douglas Debates.

Upon the principles set forth here, the Senate election was lost to Mr. Lincoln, but he did gain much prominence nationally and was elected to the Presidency in 1860, served as Civil War President was re-elected in 1864.  He truly was Illinois’ gift, “The man for the ages.”  This debate cast a long shadow upon the pages of history.

In 1963 the old stone marker became defaced and was replaced with this stone and this plaque was dedicated September 15th, 1963.