All my life, people have been telling me two things about the Alamo.

I’ve read several books on the battle that took place there in 1836, and I’ve seen a movie or two, so I definitely wanted to visit. With that in mind, we drove straight downtown and parked at Alamo Parking, right where (if I have my history straight) the Mexican army parked.

From there, we walked up the street to a Subway for lunch. Priorities.

Then we went to the Alamo. From what I’d been told, I expected to find the church crammed between tall modern buildings, almost lost to sight. Thanks to the people who told me that, I was very pleasantly surprised. The church isn’t even the only building that survived — the Long Barracks stretches for about 50 yards to the north. In front of the church is a large plaza with a monument to the men who died. Behind the building is a walled garden. It was impressively done indeed.

The place was crawling with lousy tourists (anyone who blocks my view or makes me stand in line). I wanted to get a photo without people in it, but I could only accomplish that by pointing my camera straight up, which didn’t produce the effect I was going for. 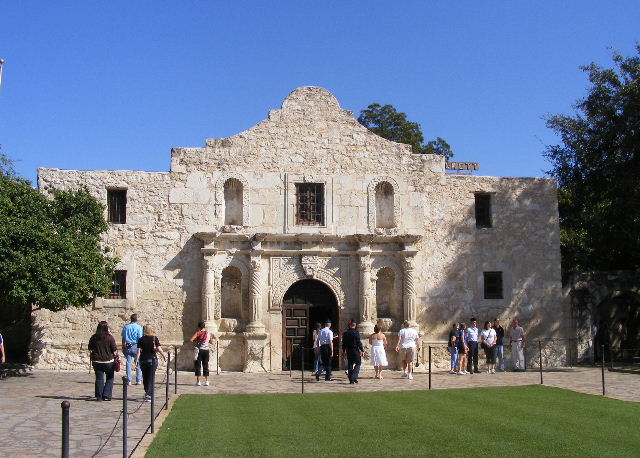 I did learn some stuff. I knew there was no roof on the church at the time of the battle, but I’d always assumed it had fallen into disrepair. Nope. The building had never been completed, and the current roof wasn’t put on until 1920. The stone floor wasn’t added until 1937.

I wasn’t allowed to take pictures inside because it’s a sacred shrine. We could walk about on the right side of the main room, but to see the smaller rooms on the left, we had to get in line. In these rooms were cases containing artifacts related to men who died in the battle — David Crockett’s deerskin vest, William Travis’s ring and James Bowie’s knife and (I kid you not — you can go see for yourself) his spoon. I looked about for his fork but didn’t see it.

We exited the church and walked over to the Long Barracks. There’s a museum inside, but neither of us are big on reading stuff in museums that we can read in books, so we didn’t stay long. We did watch a short video about the battle and the shrine. Somewhere in there I got the impression that what is now the Long Barracks doesn’t actually contain much that was there at the time of the battle. We wandered about the park and gardens and saw what there was to see. (Hold your cursor over these photos to find out what they are — if you want to.) 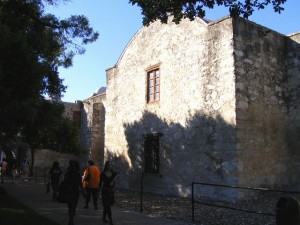 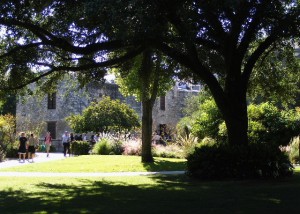 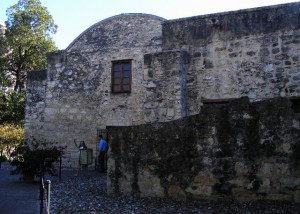 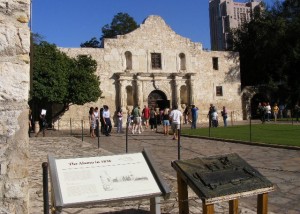 I found my favorite euphemism of the trip here — the gift shop is called the Gift Museum because there are a few display cases in the center of the room with a display of the evolution of the Bowie knife. Still nothing on his fork. There was also a scale model of the fort at the time of the battle which was pretty cool. (As a professional writer, I feel that I should be able to come up with something more descriptive than “pretty cool,” but that actually sums it up quite well.) One thing I found rather weird was all the plaques and monuments that littered the grounds. They had nothing to say about the battle — they were just commemorating the people who commemorated the men who fought the battle.

I tried to buy a bottle of commemorative Alamo water, but the machine wouldn’t take my dollar, so I bought a non-commemorative fruit punch instead. We strolled about the plaza in front of the church for a while and found Andrew Kent’s name on the memorial. (Kent is an ancestor of my niece’s husband, which doesn’t exactly make me a descendent but did add a bit of interest to the visit.) 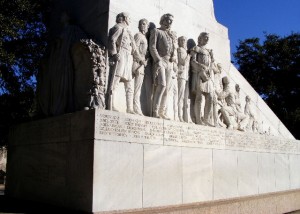 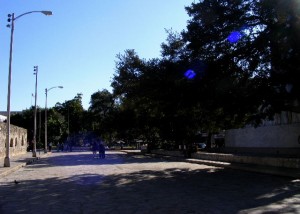 Across the street from the Alamo there is a wax museum, a hall of mirrors and a Ripley’s Believe It Or Not Museum. They are located within the area enclosed by the mission walls at the time of the battle, but I don’t remember reading about them in any of my history books, so they might not have been there in 1836. 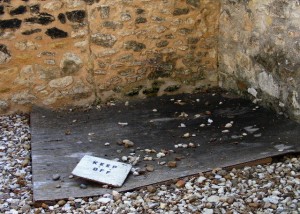 Editorial aside: Are there really people who go to the Alamo and say, “Hey, look. There’s a wax museum with a statue of Sarah Jessica Parker. Let’s go there next.”? And if there are people like that, why haven’t they been slapped? And if they have been slapped, why wasn’t I the one to do it?

One more note: Inside the wall near the Long Barracks I found a sign that said “Keep Off,” and it occurred to me that the defenders of the Alamo must not have realized that the Mexicans could only read Spanish. Think of how much bloodshed could have been avoided. There was also a sign on the back door of the church that read “Do Not Enter,” but again, it was in English. Sad. Very sad.