I never got into the Beatles when I was younger, although I’m familiar with their more popular songs, the ones that get a lot of radio play. I always thought their earlier stuff all sounded similar and their later stuff was mostly weird. I preferred the Monkees, Chicago, Neil Diamond, the Doobie Brothers, the Beach Boys, some Bread and Seals & Crofts stuff. I don’t have the ear to appreciate the subtleties of the music — I just like what I like.

Several things I’ve seen and heard lately have gotten me on something of a Beatles kick. 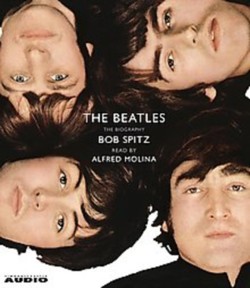 First of all, I saw a review in World magazine for a new history of the band called The Beatles: The Biography, by Bob Spitz. The book is 860 pages long, but it kept my interest throughout. The formative years of the band members in Liverpool were interesting, but their personal lives were even more disgusting than I’d imagined. I find the book most interesting when Spitz talks about individual songs. He explains how Lennon or McCartney came up with the ideas and details what makes each song innovative. Because I’m unschooled musically, I never could pick out that stuff on my own, but now I can get some idea. My friend Wayne loaned me several albums, and after I read about a song I listened to it immediately and see what the book is talking about. Here’s a sample:

“A Hard Day’s Night” was recorded the next day, on April 16, and from the extraordinary opening chord, it was evident that once again the Beatles had raised the bar for all of pop songwriting. The “strident” chord is a powerful attention-grabber — a G7, with an added ninth and a suspended fourth, so unique that it is considered neither major nor minor — that hangs in the air with disturbing inevitability. How George came up with it remains a mystery to this day; he never discussed it, even though the chord has become as identifiable as the song that follows. As it uncoils, there is nothing left to chance. The energy it delivers is explosive, full of fireworks — “It’s been a haaaard daaaays night …” — and musically as daring, with a vocal track that gathers so much steam that the middle eight (sung by Paul, John explained, “because I couldn’t reach the notes”) comes as almost a relief.

The other thing that got me on this kick was an invitation by our friends Wayne and Holly to crash a birthday party of one of their friends. For his wife’s birthday, the husband hired the Beatles tribute group American English to give a private concert in their backyard. There were perhaps 75 adults there, and maybe that many kids (but most of the kids were playing on some rented inflatables and kept out of the way). The band put on a full show, changing outfits to reflect the Beatles’ different stages. The show lasted two hours and would have gone on for three more songs but for a short, hard rain storm that made everyone scramble. The band members were very good musicians (I’ve been told) and made things as authentic as possible — using the same style instruments and singing the same parts. The guy who played Paul even played left-handed and went barefoot during the Abbey Road set. (I had already started reading the book when we were invited to the concert.) 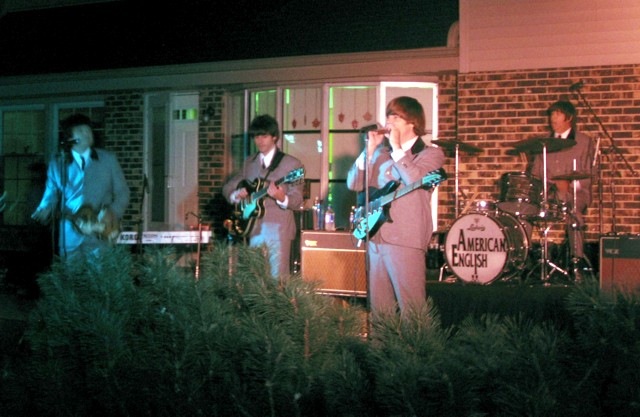 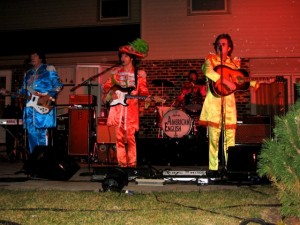 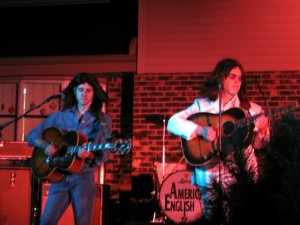 Wayne gave me several Beatles CDs for homework. So far I’ve listened to:

I know there are others, but those are the ones Wayne gave me.

He also gave me a DVD, The Four Complete Historic Ed Sullivan Shows Featuring the Beatles. Sally and I have been watching these. The Beatles appearances are fun, but we also get a kick out of the other acts — singers, comedians, acrobats. On the same show as the Beatles first appearance, part of the cast of the show Oliver did a couple of their songs. I thought I recognized one of the kids in the cast, so I did a search on Google and — I was right! It was Davy Jones, later of the Monkees.

Anyway … Here’s what I’ve decided. Their earlier stuff all sounds pretty similar and their later stuff was mostly weird. These are the songs I like best, in no particular order:

It was this sense of alienation as much as his interest in music that made George so susceptible to guiding spirits. In the Bahamas during the filming of Help!, he heard the siren song of the sitar and came under the influence of Swami Vishnu-devananda, who introduced him to hatha yoga and Eastern religions. Later in life he would become a vegetarian, consult an astrologer, and devote himself to Transcendental Meditation before embracing traditional Christianity.

That was something I’d never heard before. I looked it up on the Internet and saw several references to it, most of them skeptical. But one guy on his blog said that he met Bob Spitz and asked him about his source. Spitz told him his source was George himself — that George told him he’d become a Christian.

Hmmm … I’m struck by how much I want it to be true. Perhaps it is. I’ve always thought we’re in for a big shock when we get to heaven and see who is there — and who isn’t.