Bill Haley and His Comets

What I Knew — I knew there were a very early rock group and that their song “Rock Around the Clock” is sometimes considered the earliest example of Rock and Roll — but not according to Mental Floss. (That post was published the day after I started researching this post.)

I started with Haley’s biography. The group, formed in 1949, was called Bill Haley and His Saddle-Men. Several of their songs are on You Tube — obviously country, but with hints of rock (as though I have any clue what I’m talking about). Here are links to a few of their songs:

The band changed its name to Bill Haley & His Comets in 1952. The next year, their recording of “Crazy Man, Crazy” reached number 15 on the Billboard charts. The video on the link is pretty funny to watch. 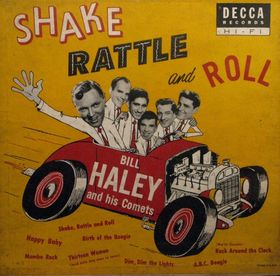 “Rock Around the Clock” came out in 1954, but it wasn’t until it made the soundtrack of the movie Blackboard Jungle in 1955, that it became popular.

Some that are understandably obscure:

After his career tanked in the States, Bill moved to Mexico and became a big hit with songs like La Cucaracha.

After doing just a bit of research, it seems to me that Haley was only a pioneer in the sense that he was one of the first white singers to perform music that was previously only sung by black performers. The fact that this made it more acceptable to the mainstream population says more, I think, about society in the early 1950s than it does about Haley as an innovator.

Haley appeared on a postage stamp in 1993.