Clara Bow was a hugely popular silent film actress during the 1920s. For several years, she was the first or second top draw in Hollywood. She had a reputation for being out of control, but many of the stories were cooked up by tabloids. She left a lucrative career in 1933, married actor Rex Bell and moved to his ranch in Nevada. She died at 60 in 1965. She was the inspiration for the cartoon character, Betty Boop.

The Plastic Age (1925) — I guess that, in 1925, plastic meant silly. Clara Bow plays Cynthia Day, a fast college girl who almost ruins the career of the star athlete with her partying ways. He dumps her and dedicates himself to his studies. She pines for him for four years and mends her ways and after graduation, they get back together. Clara’s acting consisted almost entirely of looking coy. 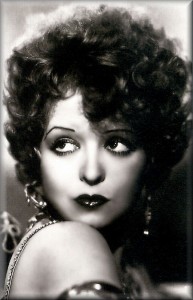 Wings (1927) — She plays Mary Preston, a girl in love with a pilot during WWI. You can read my review of the movie here. I thought she was looking a bit plump and not terribly cute, even in the “accidental” topless scene (this was pre-code). Her acting mostly consisted of making moon-eyes at Jack and dancing around like she was carefree.

It (1927) — The movie that earned Clara her title of “The It Girl.” She plays  Betty Lou, a shop girl who falls for the son of the store owner. When she pretends to have a baby to save a friend’s reputation and job, the guy doubts her. Betty Lou spurns him for his mistrust, but in the end they can’t resist each other. Clara does a good job at flirting, if that’s acting.

Overall, I think her popularity was due mostly to her huge, expressive eyes and the fact that she seemed carefree and scandalous in an age when it was just becoming acceptable for women to act aggressively toward men in public.