The Donna Reed Show was first broadcast on September 24, 1958, just five months after I was born. When I watch it, I get a glimpse into the culture I was born into — or at least into what entertained people back then. I know life wasn’t really this happy and problems weren’t this easily solved, but it the show portrays the way people wanted things to be, the fantasy in which they found escape.

Donna Reed plays Donna Stone, pretty, kind, wise housewife and mother who has a mind of her own and who always manages to find a way to make things right. 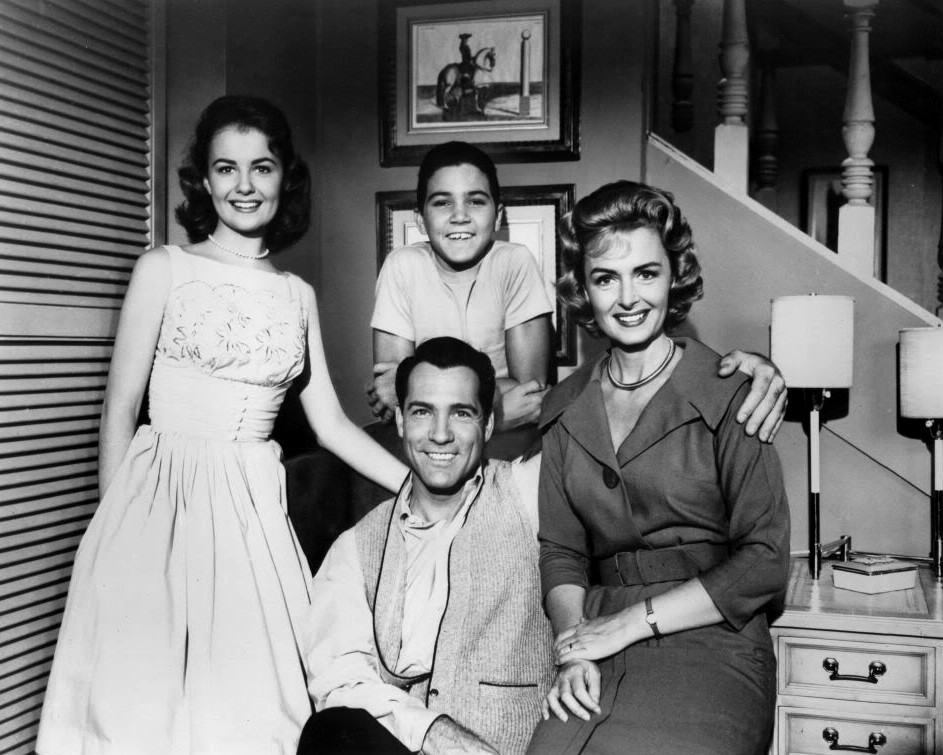 Her husband Alex (Carl Betz) is a pediatrician who sometimes works out of a hospital and sometimes out of an office attached to the Stone house. This makes it convenient for him to be in the show when they want him and out of it when they don’t. A frequent plot device is to have him suddenly called away on an important house call, leaving Donna to deal with some crisis at home.

Their daughter Mary is played by Shelly Fabares.  Their son Jeff is played by Paul Peterson. Mary is 14 in the first season, Jeff 11.

The problems the family faces are pretty tame. How can Donna be at Alex’ speech at a doctors’ convention at the same time she’s at Mary’s club meeting and Jeff’s basketball game? Can Donna take Jeff and his friends camping when Alex is suddenly called away?

Alex prays before meals, or at least important ones like Thanksgiving. He and Donna sleep in separate beds, but there’s a hint of passion now and again. Mary dates upon occasion.

In the end, the Stones do what is right, stand up for themselves, look out for family and friends and are kind to strangers. It sounds corny and silly, and it is. But it’s also very pleasant. A strong dose of wholesome is a good thing now and again. While watching, I don’t generally laugh out loud much, but I do grin some and tear up occasionally.

It was almost cancelled after the first season, but when it was switched from Wednesday to Thursday night it caught on and became popular, although it only made the top 25 one year, in 1963-1964.  The show lasted eight seasons, until March, 1966 when Donna Reed got tired of the grind. By that time, Shelly Fabares’ character had grown and gone off to college and was replaced by Jeff Peterson’s younger sister Patty who played an adopted daughter names Trisha.

I’ve heard of the show upon occasion, although I can’t remember any buzz about it when I was a kid. Of course, it went off the air when I was eight, long before we had a TV in our house.