J. Fred Muggs was a young chimpanzee that appeared on NBC’s Today show from 1953 to 1957. with Dave Garroway. Muggsy eventually got too large to control and, after he began biting people, he was replaced by another chimpanzee named Kokomo Jr. 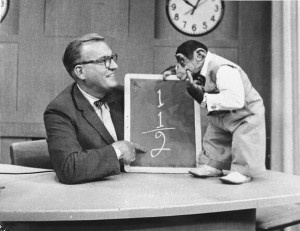 The chimp was there simply to boost ratings, and he did, apparently by introducing chaos to the news show. There’s a clip of him on the show here, and an appearance on the game show Make the Connection here. I read somewhere that J. Fred learned that when the red studio light was on, indicating that the cameras were running, he could get away with anything without fear of punishment.

Muggys inspired a lot of commercial products, including books and toys and, for a while, had the annual TV Guide bloopers awards named in his honor. He starred in an act at Busch Gardens for a while and now lives in quiet retirement in Florida. 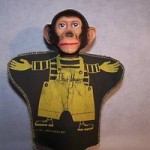 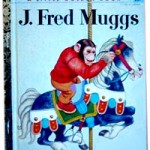 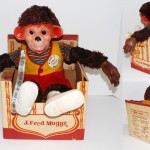