Let me say right at the start that if this had been my first visit to a Dog n Suds, I would not have embarked on my quest to visit them all. I had an idea of what I would find when I phoned the restaurant last week to make sure they would be open. The conversation went something like this.

Girl who answered the phone: Daw’n’Sus 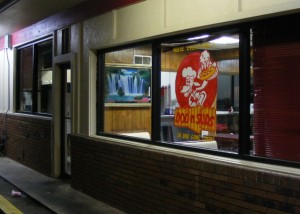 Me: Are you open year round?

Me: Are you open every day?

Me: What are your hours?

Girl (after pausing to consider how she could answer in less than three syllables): ten t’a 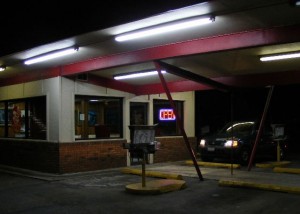 I knew Paragould wasn’t a large town, and I knew Dog n Suds was on the main drag, so I didn’t bother with directions. But when we’d driven the entire distance of the main drag in both directions without finding it, I began to wonder. I stopped at a gas station to ask directions and found out, to my surprise, that Paragould has two main drags.

We finally found the Dog n Suds tucked away on the older end of town. The sign was only half lit and the place was empty. This was striking because everybody in northeast Arkansas seemed to be driving around Paragould on this Monday night. A nearby Sonic was packed, as were most of the other restaurants in town.

We parked next to the building and ordered through the antiquated intercom. While waiting for our food, I got out and took pictures. The only evidence of life was our server, a friendly girl whose first language was obviously not English. We all got corn dogs. They were pretty good, if overdone. My wife had spicy fries and said they were delicious. My daughter and I had onion rings. They were the processed, rubbery, disgusting kind. The root beer was fine.

Here are the two sides of the street sign. If you combine the two, you can almost come up with one completely lit sign. Almost. 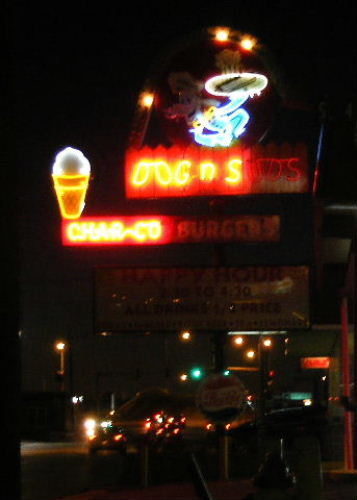 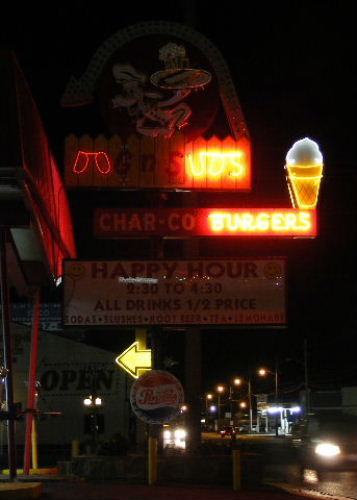 The whole place was a little creepy, so we drove up the street to a McDonald’s and ate in its parking lot.

I’ve now been to eight of the remaining 16 Dog n Suds. My quest is half completed.