A Ghost Story (of sorts)

Looking for somewhere to spend a getaway weekend, we made reservations at the Golden Lamb in Lebanon, Ohio. The hotel was opened in 1803 and moved into its current building about 10 years later. It’s generally recognized to be the oldest continually operating business in Ohio. 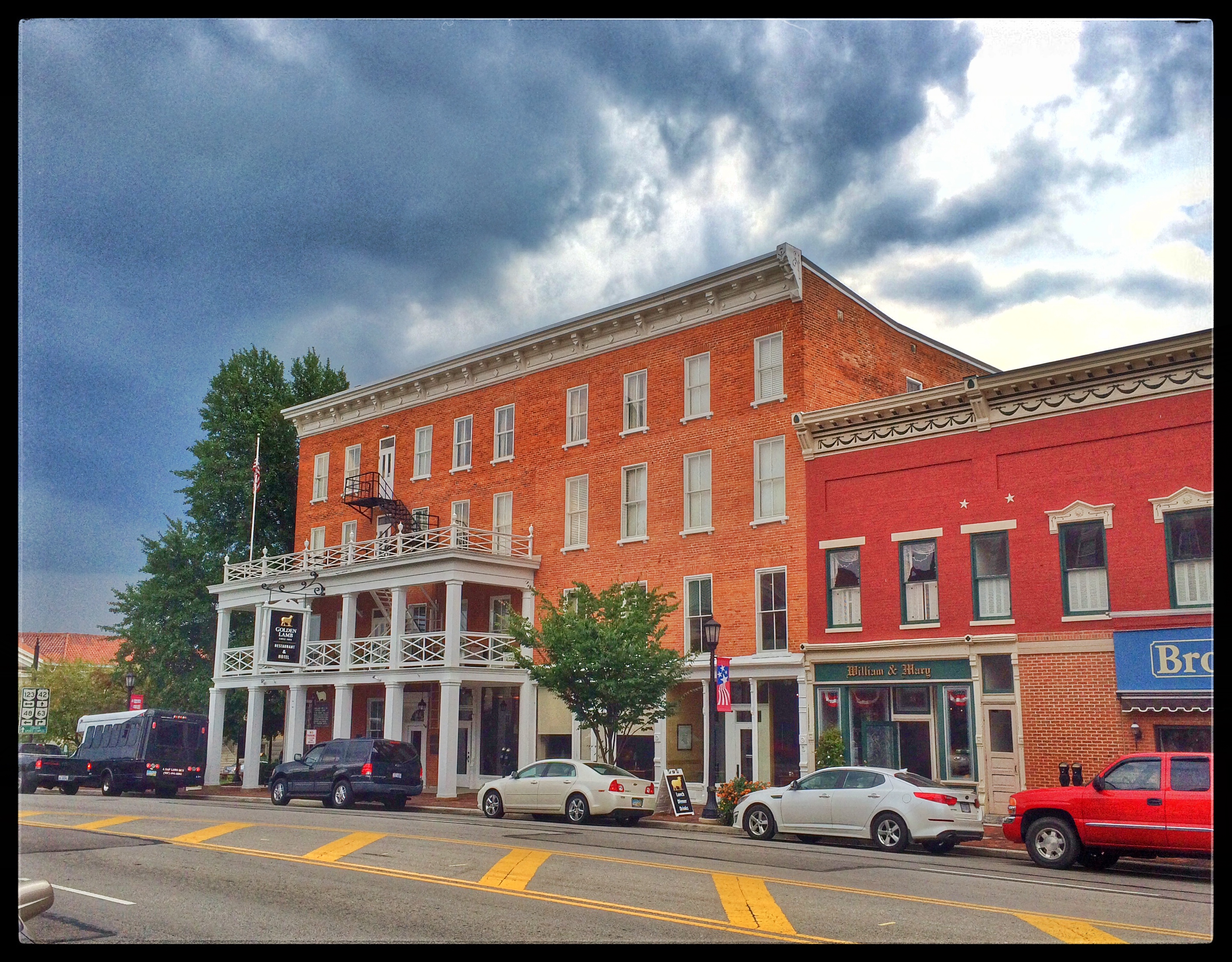 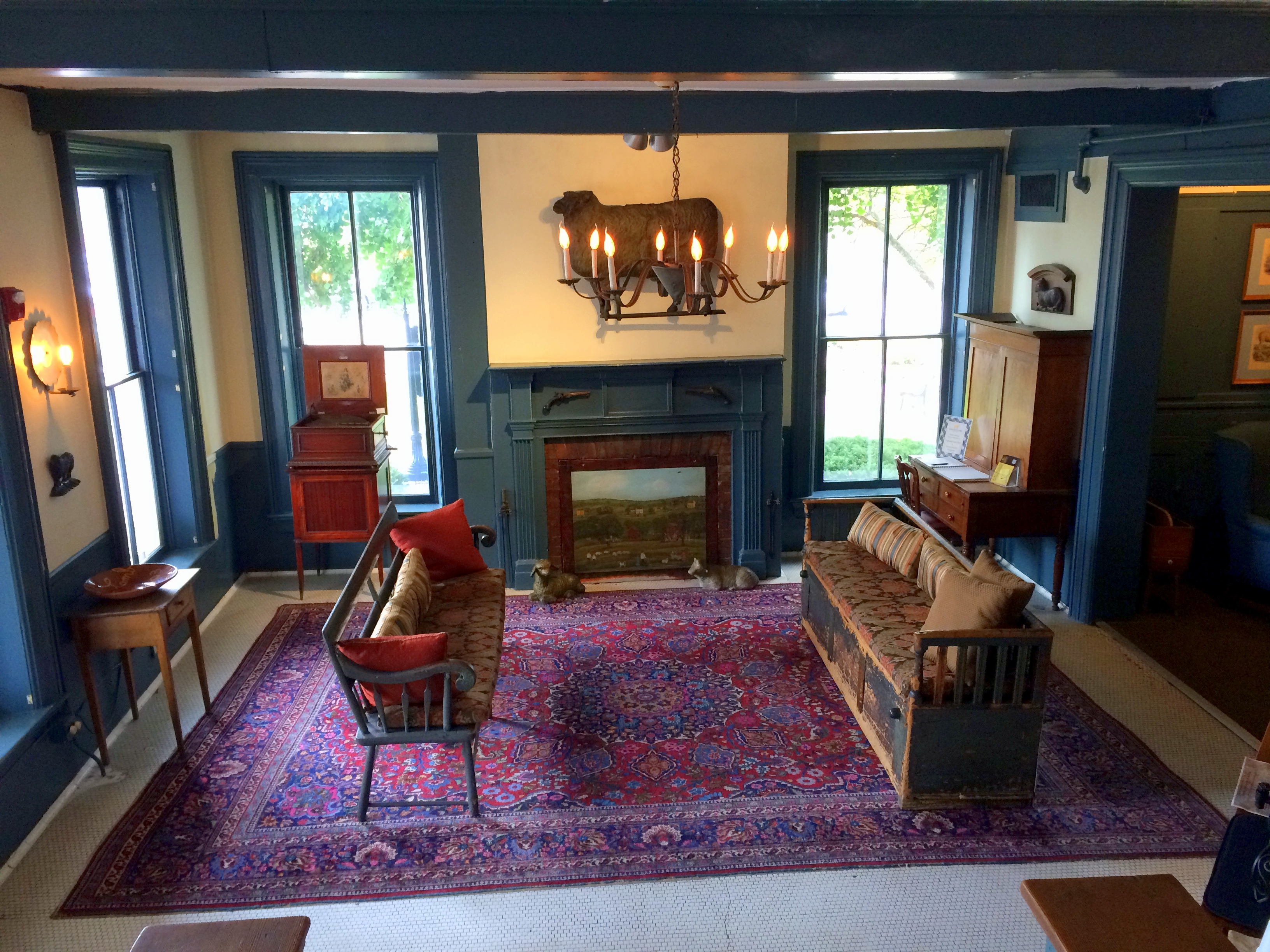 It’s so old, they have actual keys. 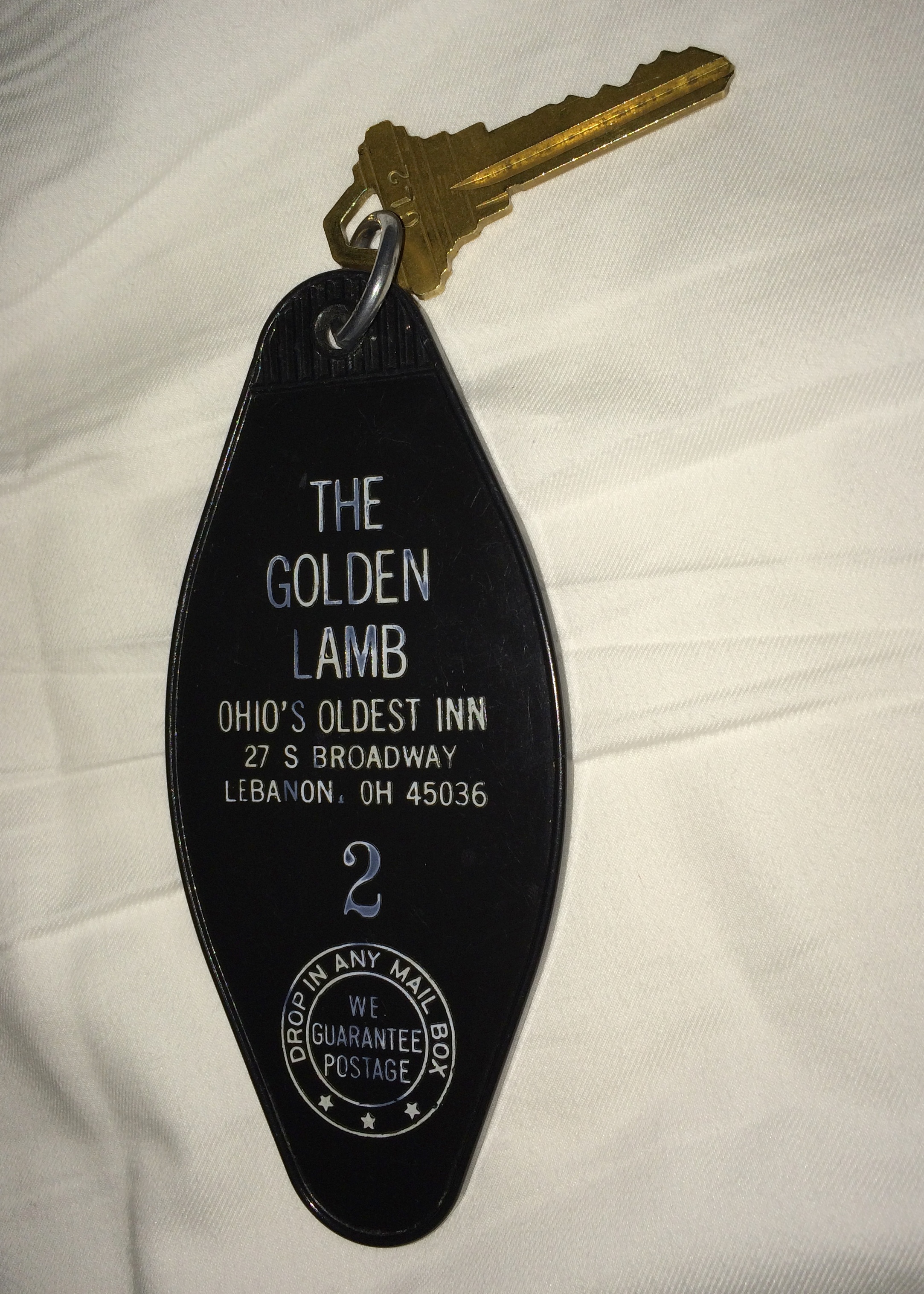 The hotel has been a popular stop for famous people, including several Presidents. The rooms are named for those who have spent a night there. 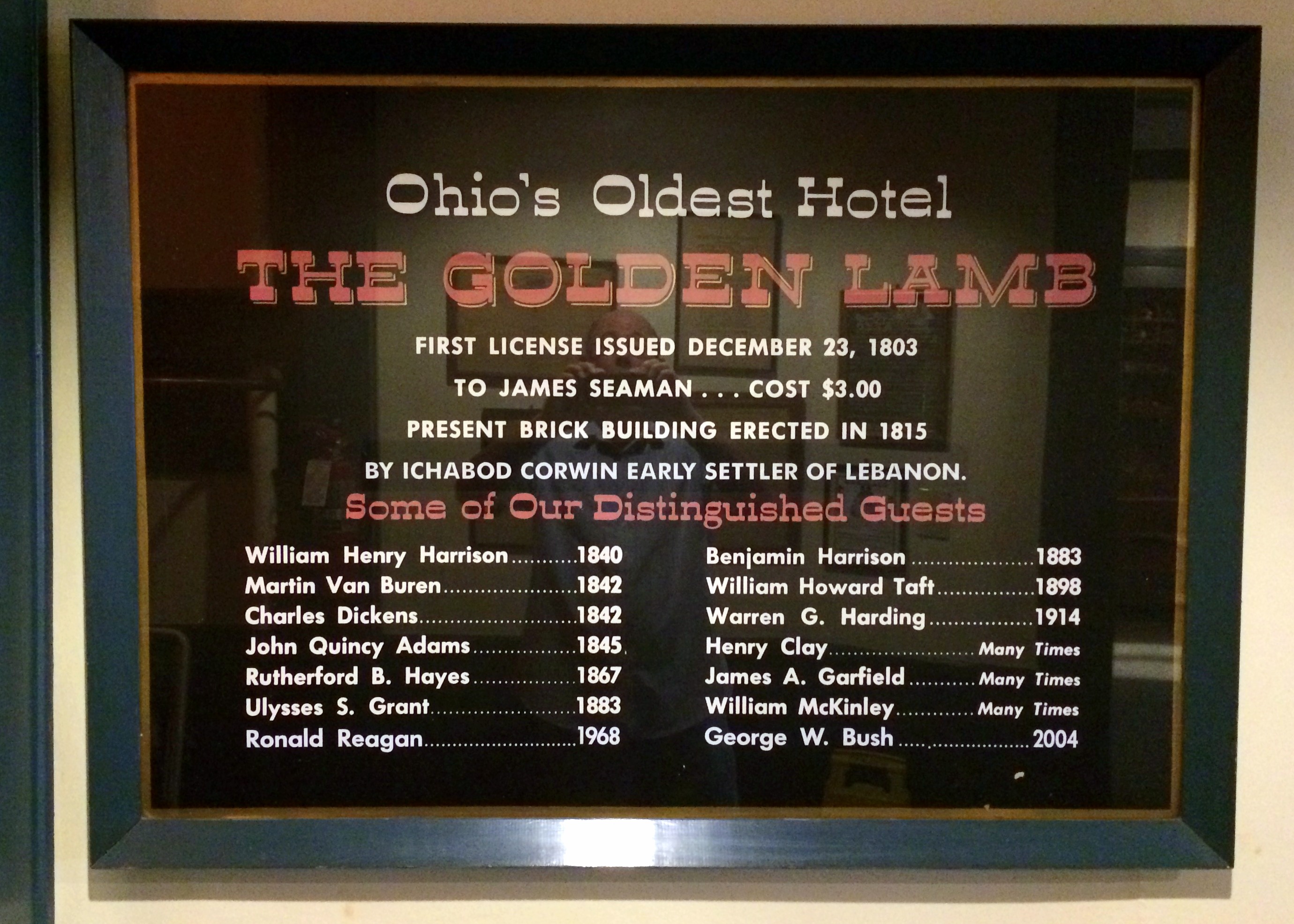 We chose the Harriet Beecher Stowe room because it seemed the nicest of the few we could afford. A week before our visit, I saw on the Internet that that particular room is haunted. Yea, whatever.

There is no elevator. As we were schlepping our luggage up to the fourth floor, we passed a woman who worked there. She greeted us, and then said, “Watch out for ghosts.” 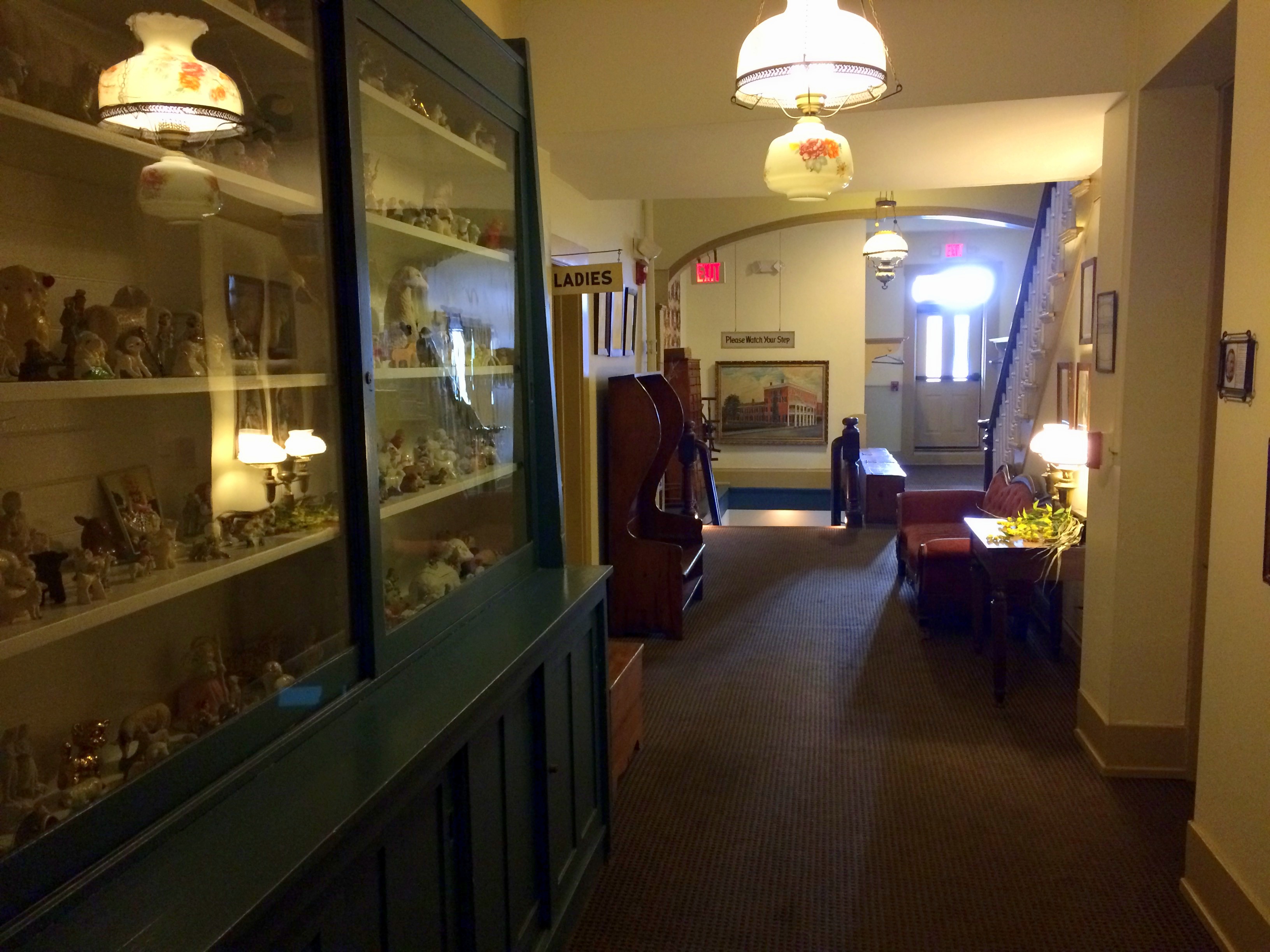 Our room was located right at the top of the stairs. 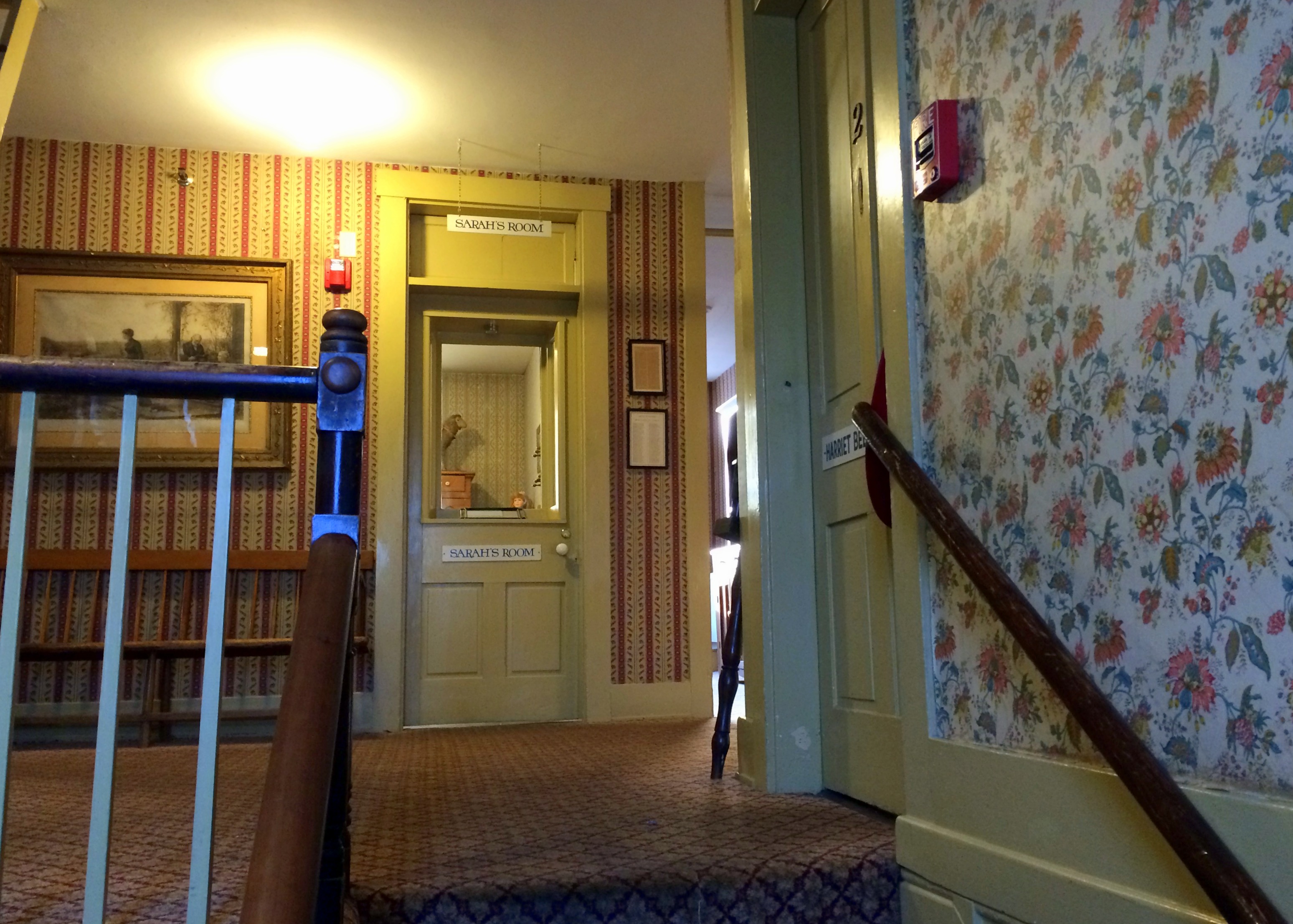 As we entered, I noticed a picture hanging crookedly on the far wall. I walked over and straightened it. My wife thought I hadn’t gotten it quite right, so she made another slight adjustment. 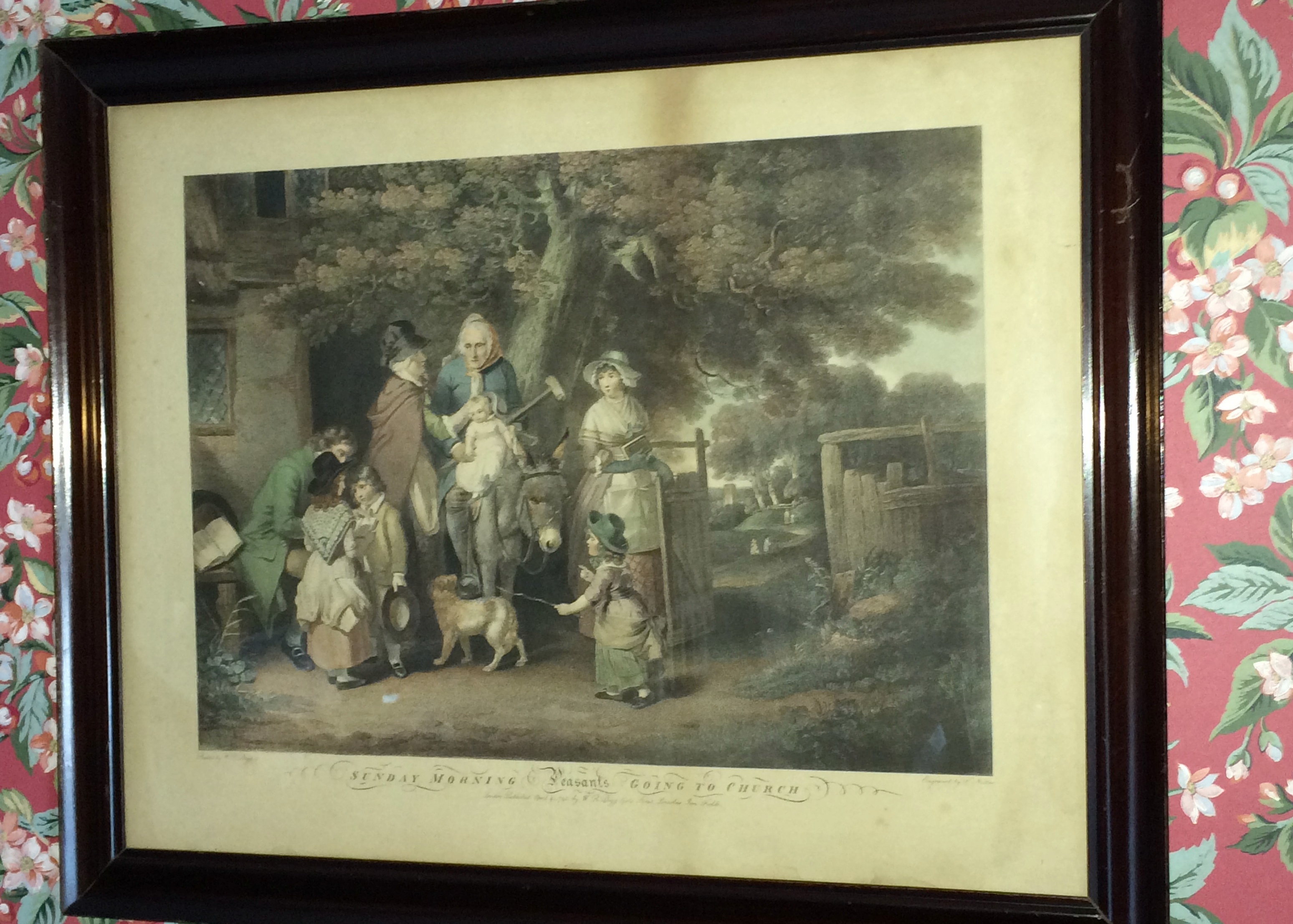 It was early in the afternoon, so we spent a couple hours visiting the shops of downtown Lebanon.

When we got back, we noticed the room across from ours. It was labeled Sarah’s Room and was set up like a museum. We wandered over and were reading the sign when a woman walked past and said, in a mysterious voice, “They have no idea how the fingerprints got on the inside of the window.” I was about to tell her, but she walked off and disappeared into a room down the hall. 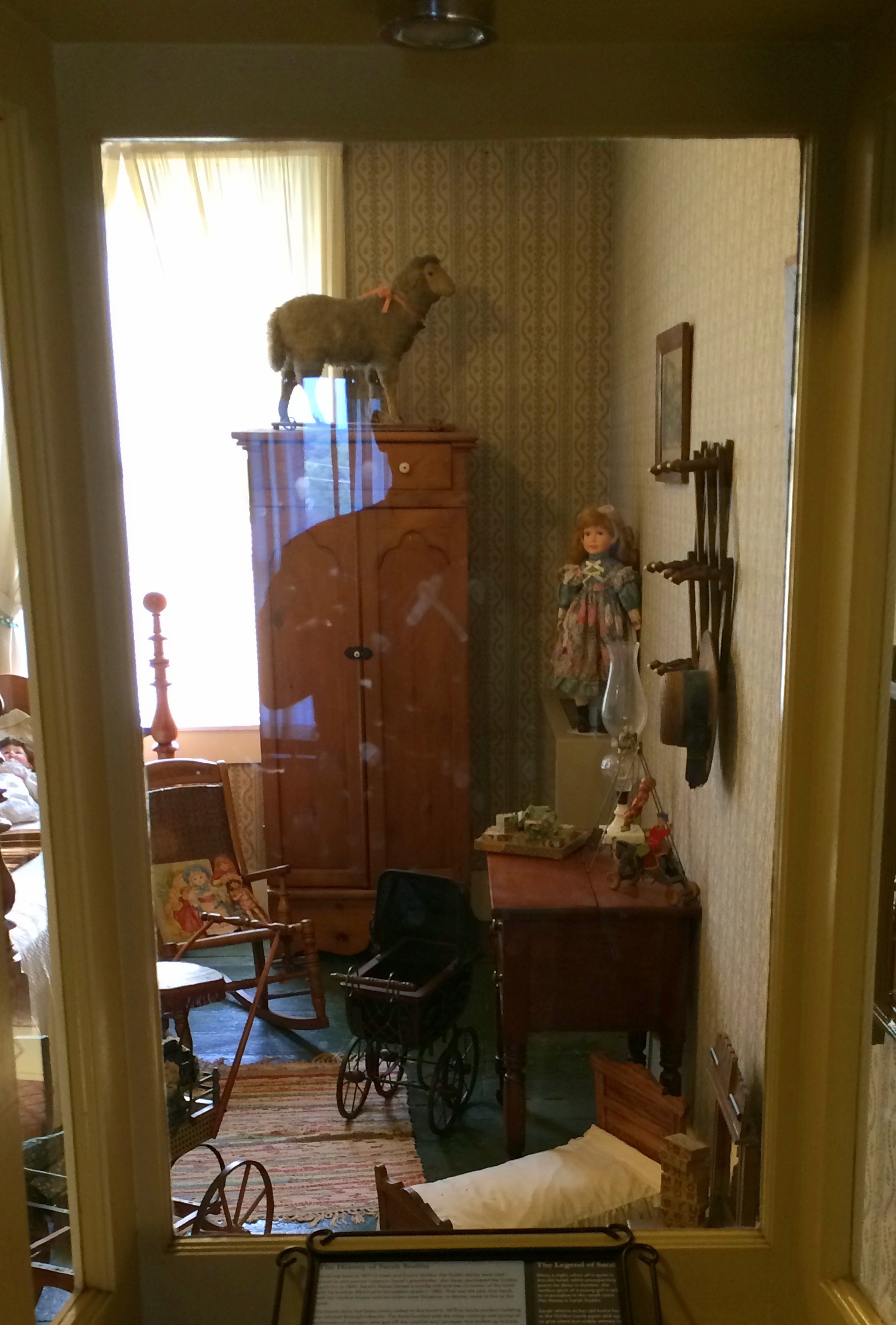 A plaque beneath the window told the story of Sarah Stubbs. Her grandfather owned the Golden Lamb, and Sarah moved here when she was five and lived in the room now called the Harriet Beecher Stowe room — the room we were staying in. At some point, she was moved to the smaller room across the hall, and she didn’t like it. The chair and nightstand in the room were hers.

Sarah lived in the hotel for many years, then got married and moved away. She died at the age of 79 in 1957. But some people believe that she returns to the hotel as a ghost and expresses her displeasure at having to switch rooms by tilting pictures and leaving fingerprints on the window.

Let’s pretend, for the moment, that the story is true. Sarah lived 59 more years but, when she died, was so upset that she had to move into a smaller room as a child, that she returns to the scene and haunts it. It sounded to us like she was a spoiled brat who needed to be spanked, and if she had shown up in her ghostly form, I would have told her so. 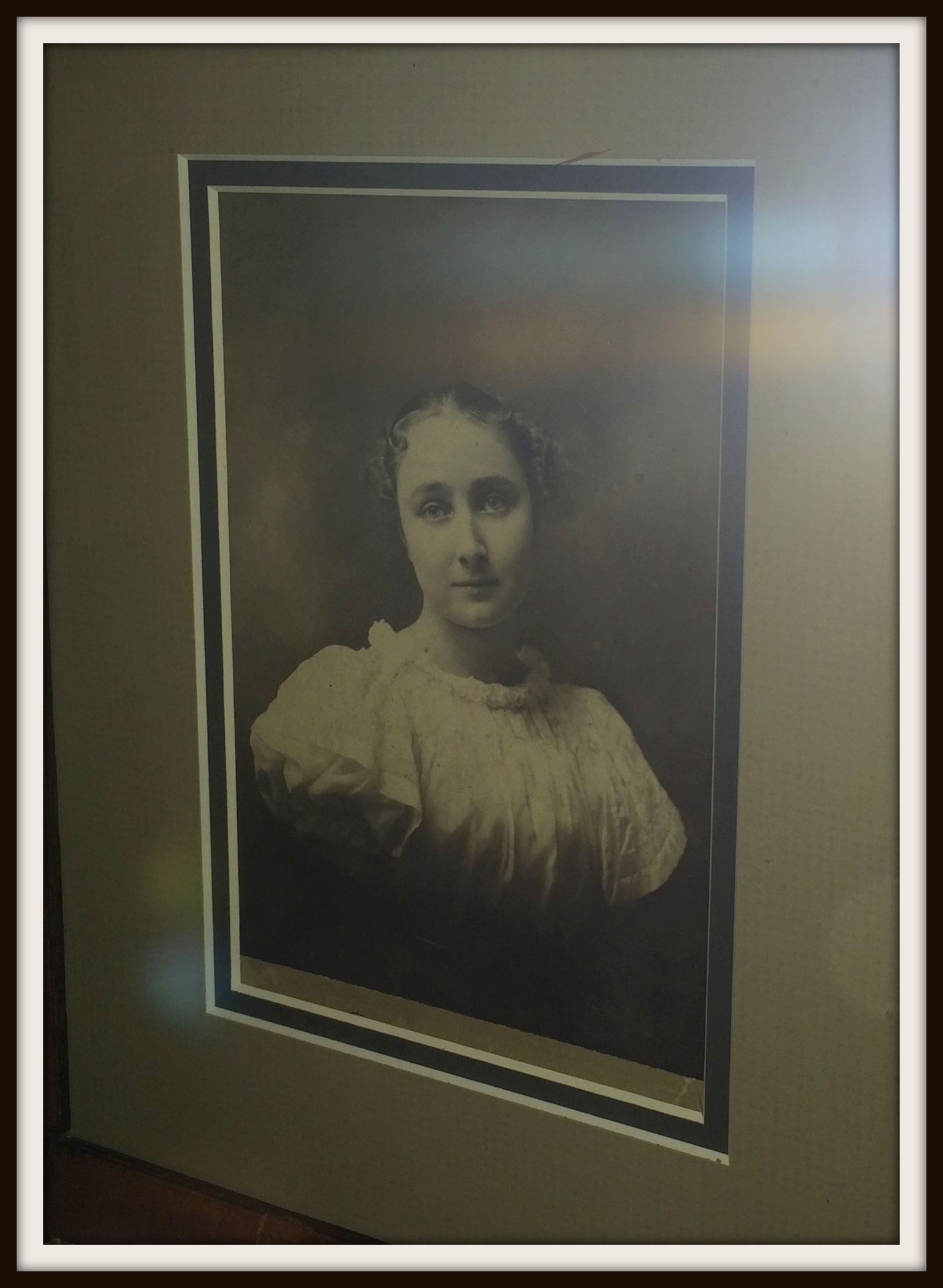 There were display cases filled with lamb figurines in several places around the hotel. 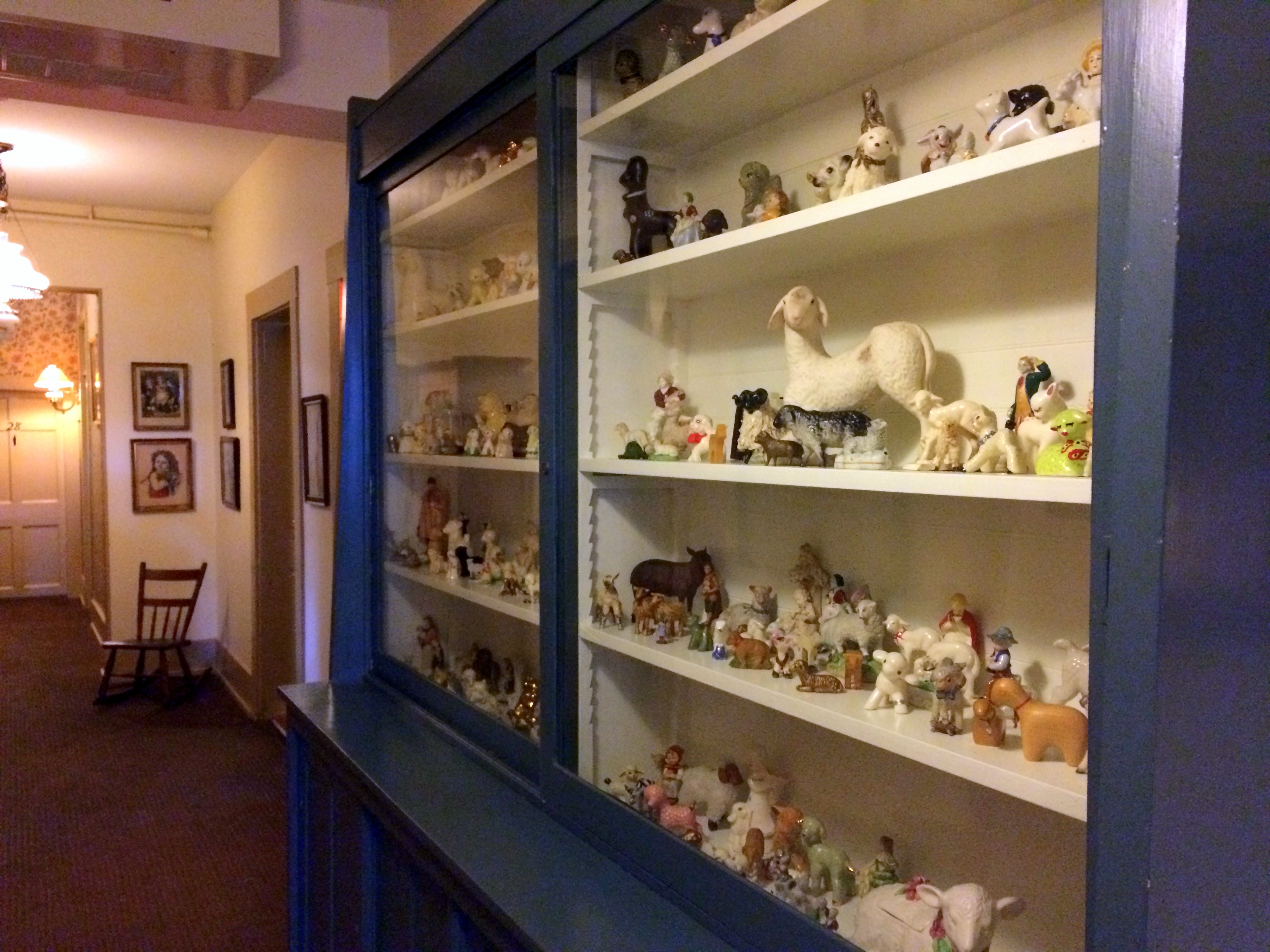 And this cool box in the lobby.

We headed down to The Blackhorse Tavern. Our package included a meal with appetizer, two entrees and two desserts. My wife had salmon, with sorbet. I had prime rib, with cheesecake. It was very tasty. It was also the second most expensive meal I’ve ever paid for. 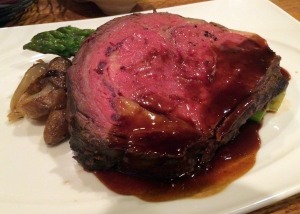 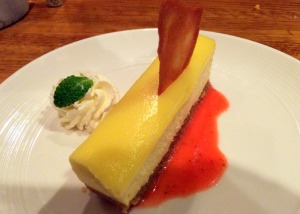 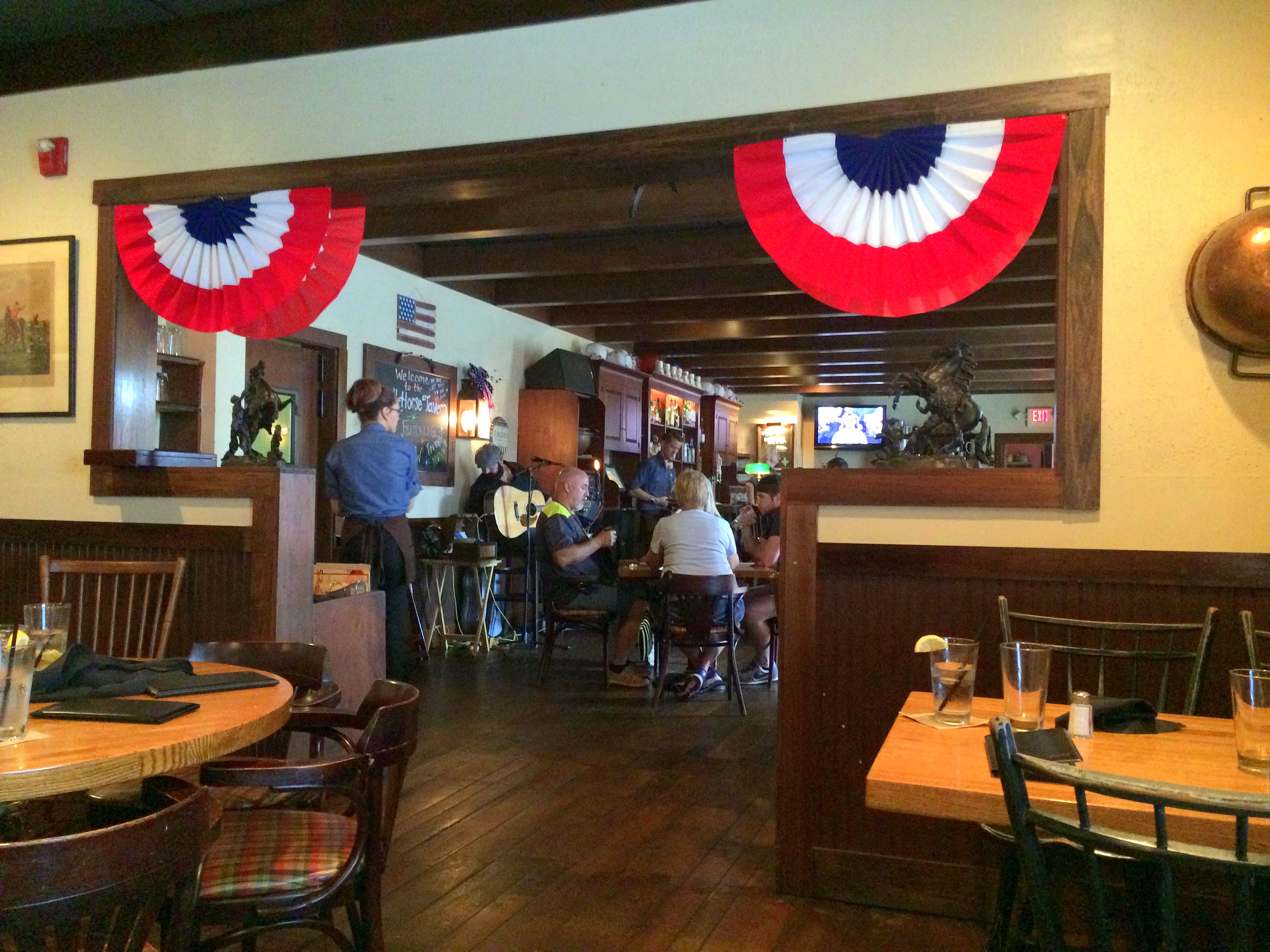 After we ate, we wandered out onto the veranda and watched a huge swarm of Chimney Swifts spiraling into a nearby chimney.

It was late on an overcast evening, but you can get an idea of the swifts in this video.

I went back out and took these photos the next morning. 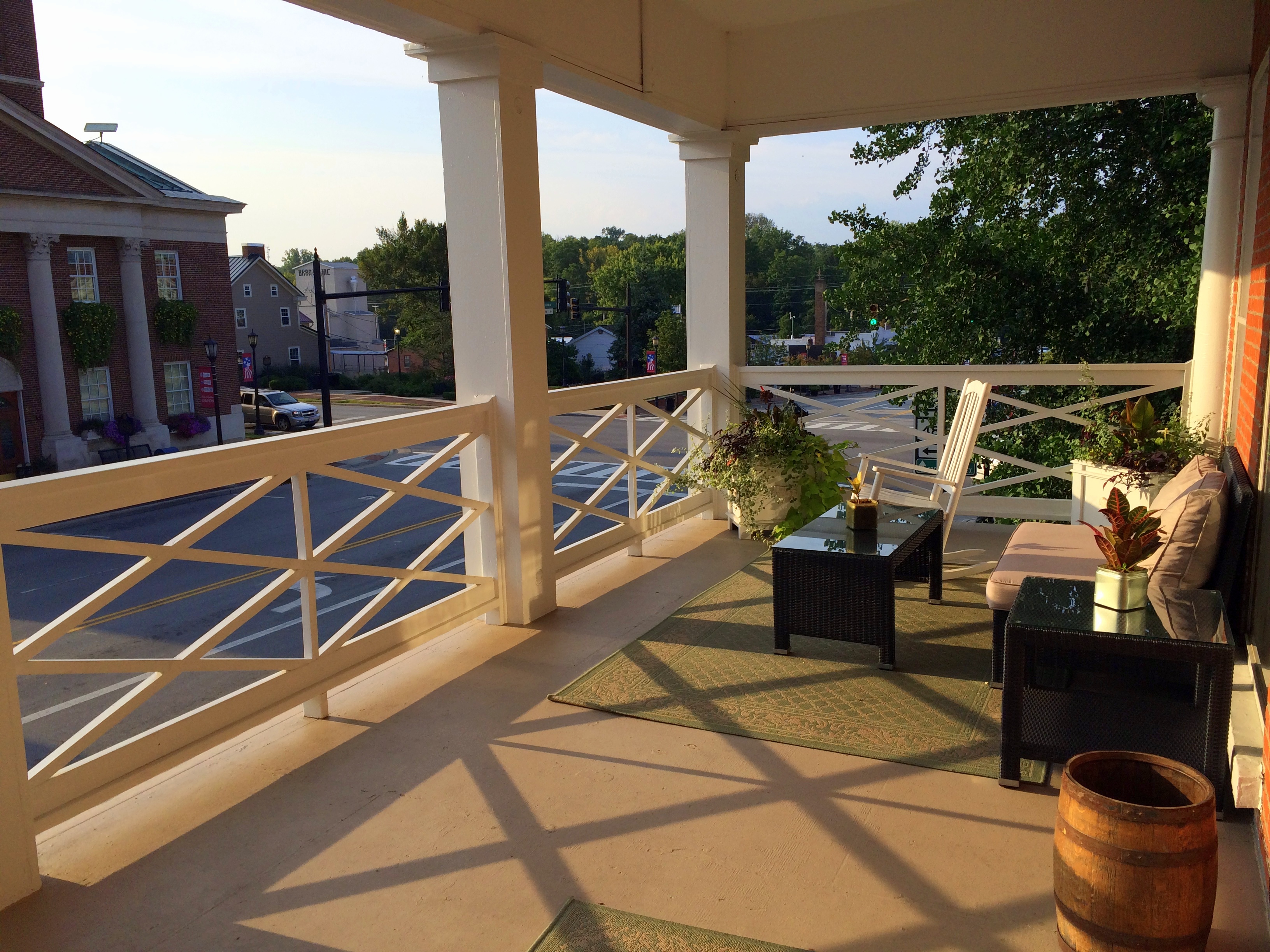 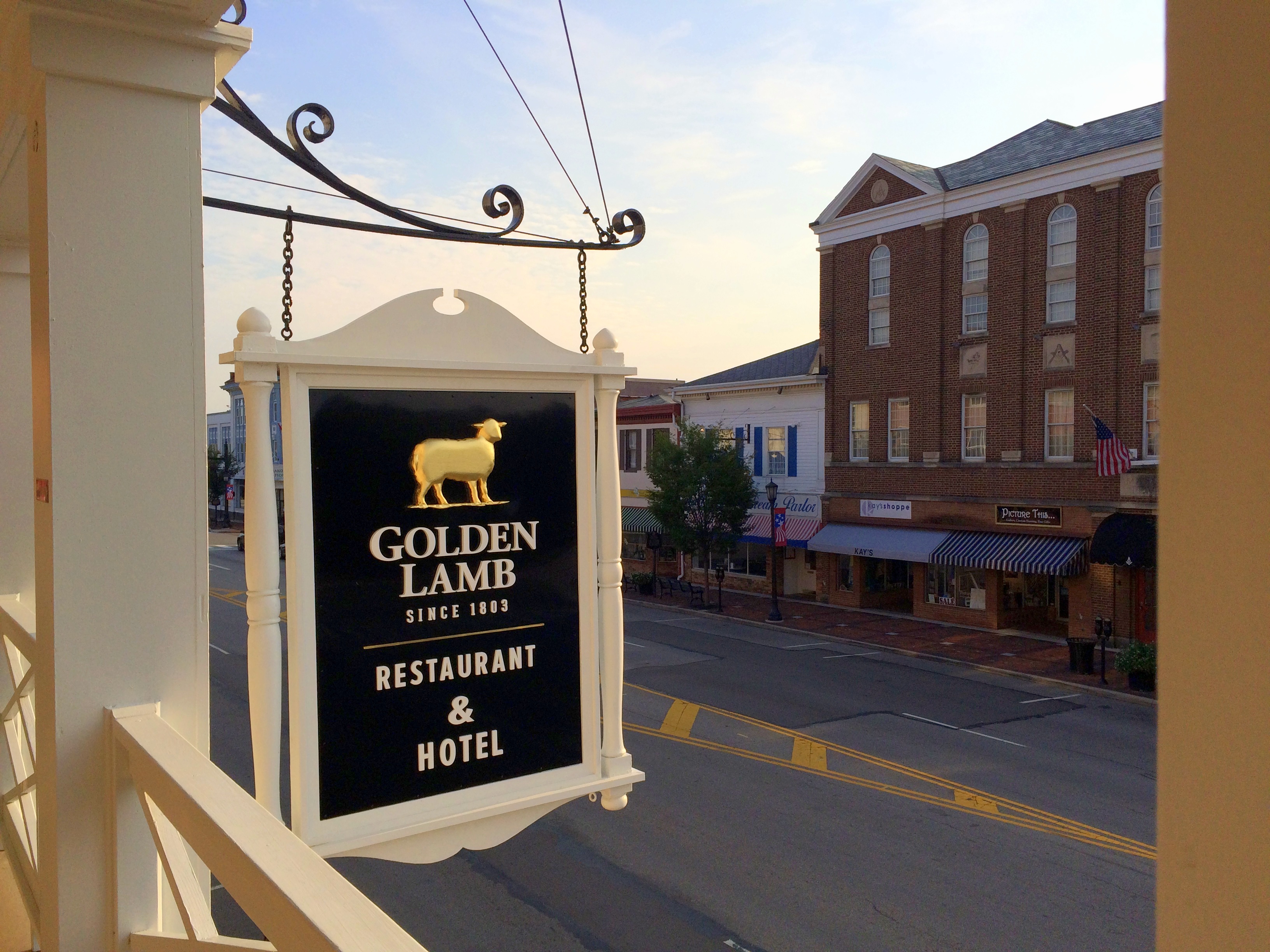 We went to bed with no thoughts of ghosts and had a reasonably comfortable night in a bed that was narrower and harder than we’re used to.

We ate breakfast in the front room of The Blackhorse Tavern, part of the original building built in 1815. I had pancakes that were incredible — by far the best I’ve ever had in a restaurant. 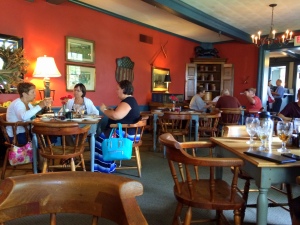 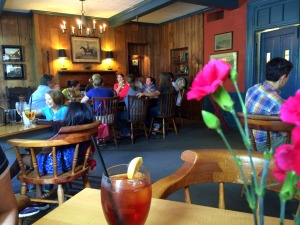 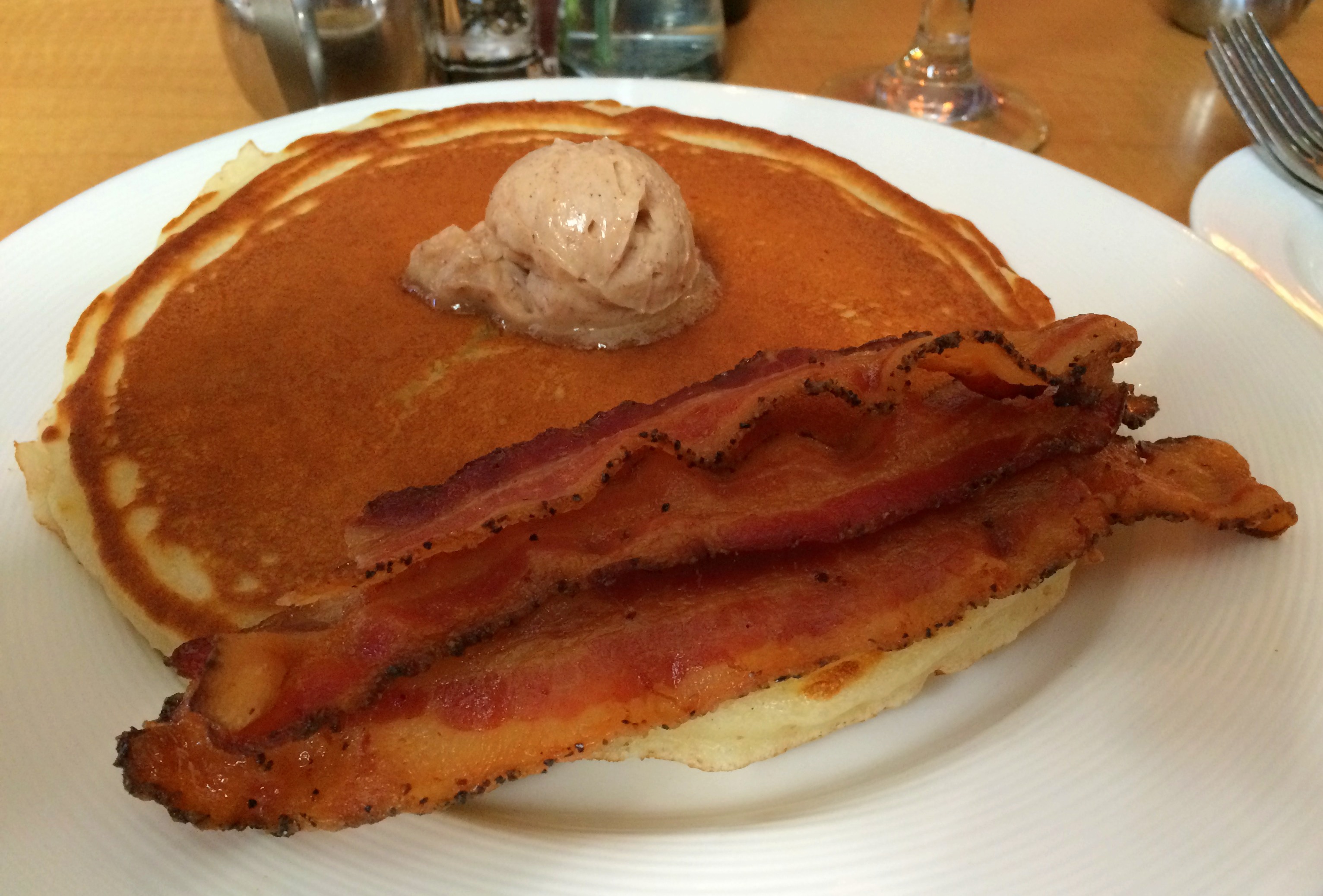 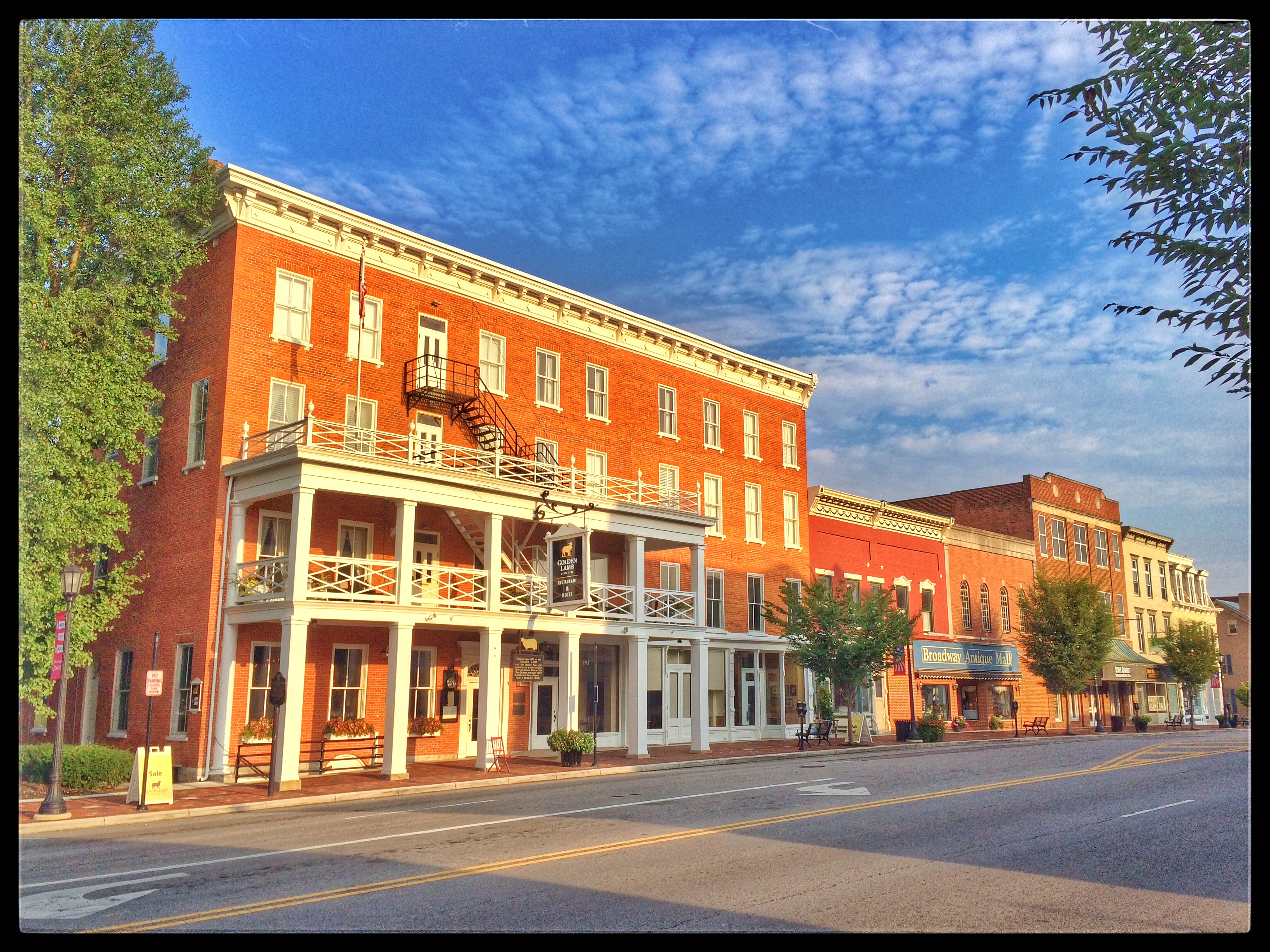 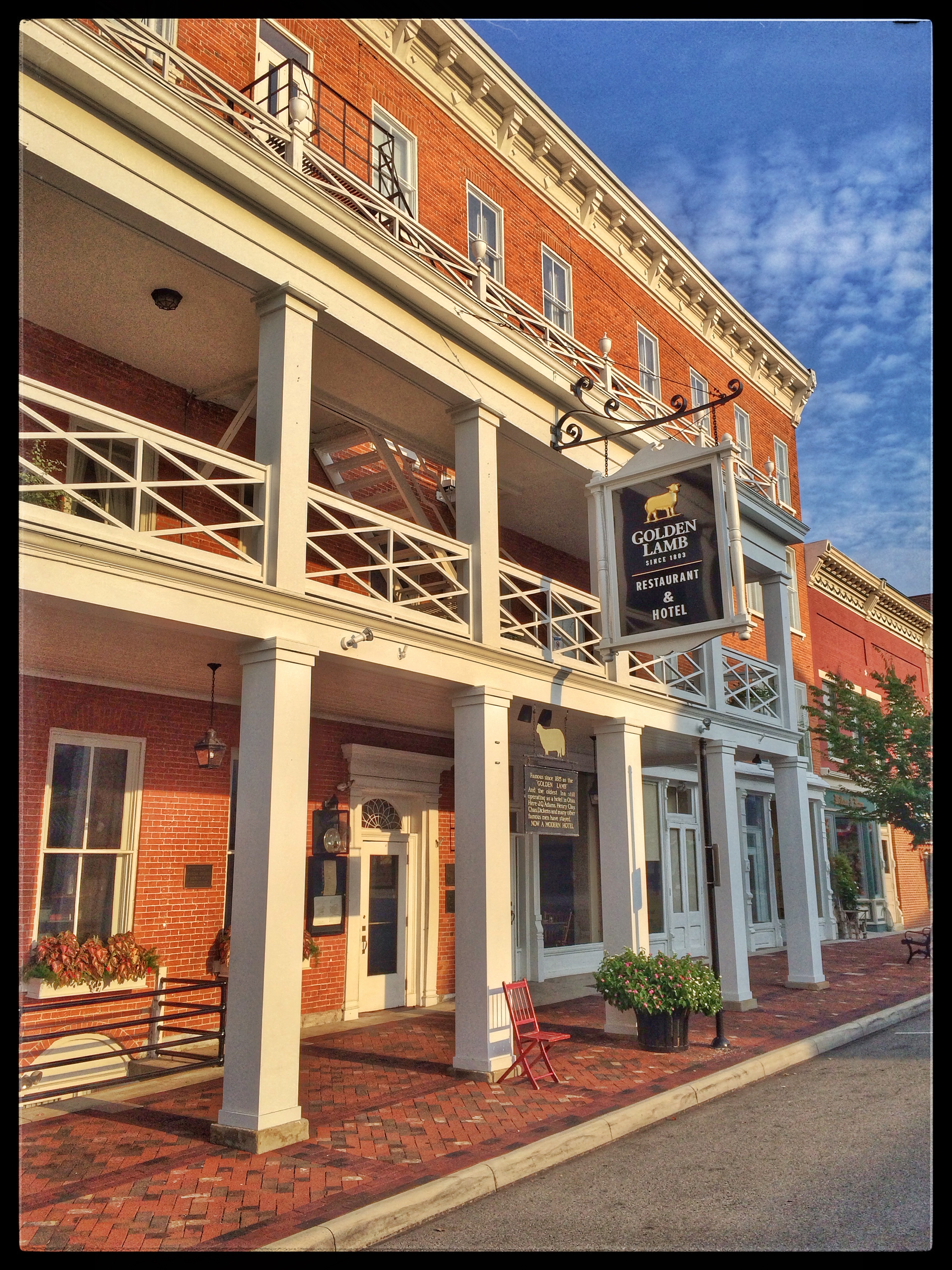 The window visible on the top floor was our bathroom. The window on the back wall was our bedroom. 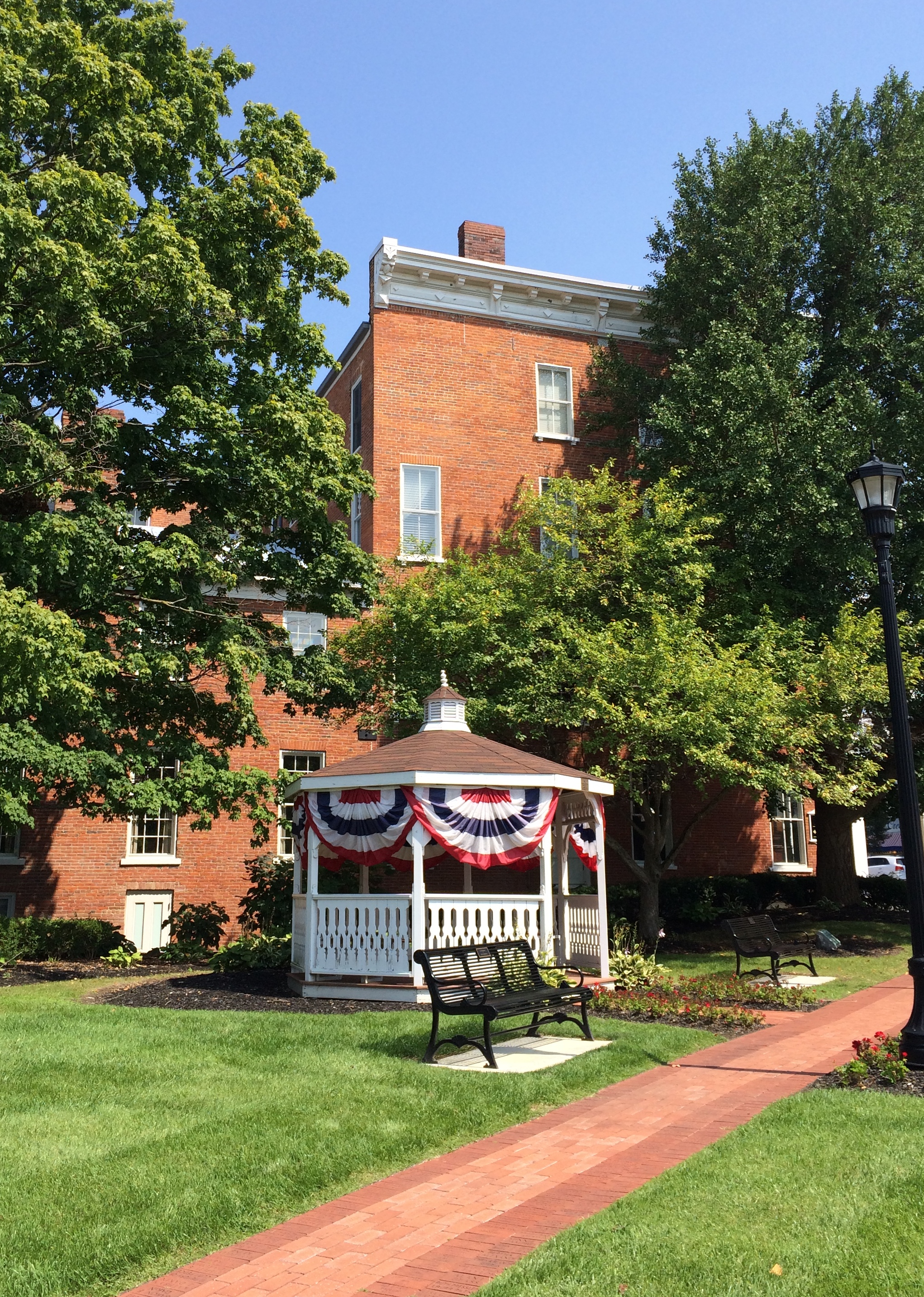 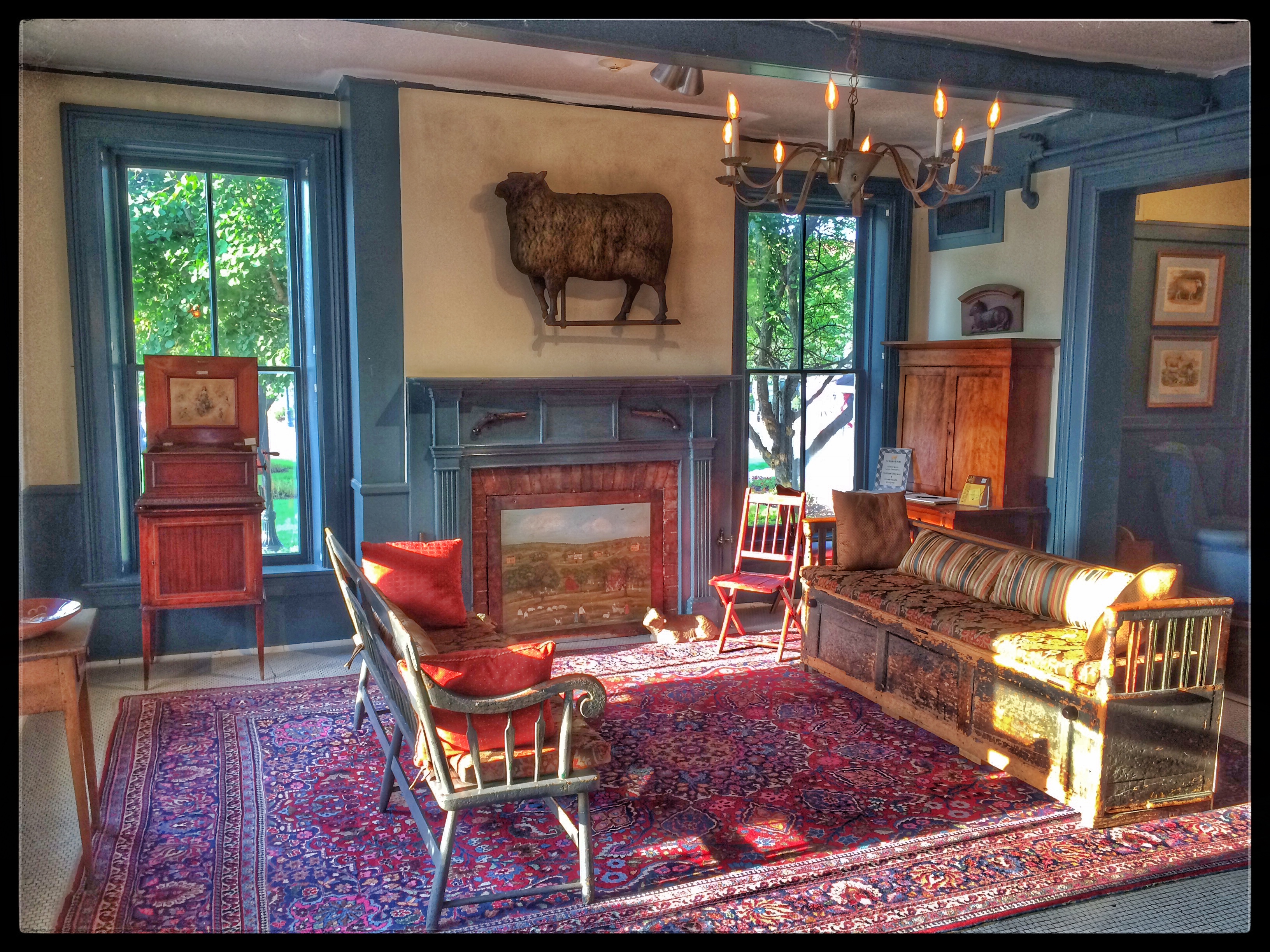 Oh yea, about the ghost. Remember how we straightened the tilted picture when we’d first entered the room? When we got up the next morning, it was still straight.