How I Almost Caused the Cubs to Lose the World Series

I have a confession to make. It was my fault the Indians scored those three runs in the bottom of the eighth inning in Game 7. I allowed myself to become overconfident. I know better.

I began following baseball seriously in 1967, when I was nine. That means I was around in 1969. I was out in my front yard tossing a ball up in the air and catching it while listening to the Cubs on the radio on opening day. The Cubs blew a three-run lead in the ninth and fell behind by a run in the 11th and then Willie Smith hit a pinch-hit, walk-off, two-run homer to win it. The Cubs started 11-1 and were in the lead into September. I still have a vivid memory of standing by the hutch in the dining room while my mom explained magic numbers to me — and then told me the Mets’ was zero. The season was over.

I was around in 1984. Bobby Dernier, Rick Sutcliffe, Ryne Sandberg. For a short time, we had a kitten named Leon, named for Leon Durham. Yea, that Leon Durham. The one who let a simple ground ball trickle between his legs and allowed the Padres to come back from two games down to win the series 3-2 and go on to the World Series. We got rid of the cat.

I was there for 1989, when Dunston and Grace and Dawson and Sandberg put together an exciting, fun-to-watch season and then fell quickly to the Giants.

I was rooting in 1998 when the Cubs sneaked into the playoffs via the wild card and immediately went to sleep, losing three forgettable games to the Braves.

I was ecstatic in 2003 when they beat the same Braves in the first round and were up three games to one on the Florida Marlins. The Marlins! Surely this was the year. I was watching when Steve Bartman deflected the ball and Moises Alou went crazy. Let me put this in perspective. It was a foul ball. There were already two strikes on the batter. A non-play. It changed nothing. But as soon as it happened, I knew, in the pit of my stomach, that it was over. You may think I’m exaggerating, but I’m not. I knew. Sure enough, an error by Cubs’ shortstop Alex Gonzalez opened the door for a seven run inning. The Cubs blew another lead in Game 7 (yes, they had another chance to win it the next night), and it was over.

I remained a fan for all the years in between, when the Cubs were mediocre at best.

So I know better. But there I was on Wednesday night. The Cubs were leading 6-3 with two outs in the eighth. Four outs to go to win the championship when (I cringe when I think of this, but I have to be honest) I got over-confident. To celebrate, I pulled out my package of Snappers (“A Crunchy Salty Sweet Caramel Pretzel Treat with Dark Chocolate and Sea Salt) and lined four of them up on my desk — one for each out yet to go. I was planning to eat one after each out. 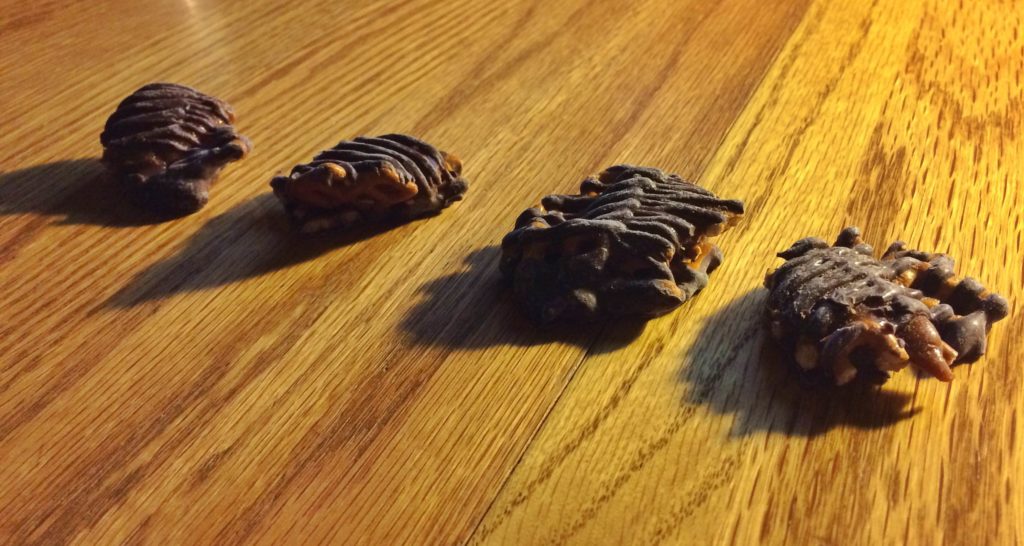 I should have known better. I do know better. Before I could even reconsider, the Indians had scored three runs to tie the game. I’m sorry.

As quickly as I could, I swept up the four pieces of candy, put them back in the bag and stuffed the bag back in the drawer. As penance, I stood up and paced the rest of the game.

We all know the outcome by now. You’re happy and I’m happy. But I’m also relieved. When I think of how close I came …