As part of my on-again, off-again pursuit of cultural phenomenon of the past, I studied Babe Ruth in his role as a public figure and not just a baseball player.

I started with the the 1992 movie The Babe, starring John Goodman. This film portrayed Ruth as a spoiled five-year old who once in a while did something nice for a kid but was otherwise a brat.

I then watched Headin’ Home, a 1920 silent movie in which Ruth plays himself in a totally fictional version of his rise to stardom.  The only appeal it could possibly have had was to enable fans, who in those days had no access to TV, to see Babe Ruth. Here’s a sampling.

I read Babe, by Robert W. Creamer. I really wanted to like Ruth, but it’s hard to do. Baseball aside, he was selfish, crude and undisciplined. One of his teammates explained what he was like by saying, “Babe just does things.” He meant that he had no inhibitions. If he wanted something, he took it, including a non-stop string of women. He drove his first wife to a series of breakdowns, and only curbed his womanizing tendencies after his second marriage because his wife traveled with him pretty much everywhere.

It was this same determination to do what he wanted that made him famous. Baseball was played small during the early years — bunting, stolen bases, slap hitting. It wasn’t that players couldn’t hit home runs (although for much of the time the ball didn’t travel as far). It’s just that the game wasn’t played that way. Until Ruth came along and did whatever he wanted.

The masses are always transfixed by those few individuals who have no inhibitions. He loved the limelight and was willing to do pretty much anything that anybody asked him to do. There are photos of him in cowboy gear riding on cows, blowing out candles on a birthday cake, hitting a giant ball … And even though he might have been a jerk, most people who knew him seemed to like him. His reputation for being kind to kids — signing autographs for hours and visiting kids in the hospital — is genuine. All that, plus the fact that he was the best player in the most popular sport, accounted for his popularity.

In addition to the movies, like Headin’ Home and The Pride of the Yankees, Ruth stared in a series of shorts in which he taught kids the fundamentals of baseball.

I particularly enjoyed Just Pals. There’s a scene in which Babe is hitting while a kid named Freddy is standing in the right-hand batter’s box paying no attention. He’s lucky Babe didn’t foul one off. 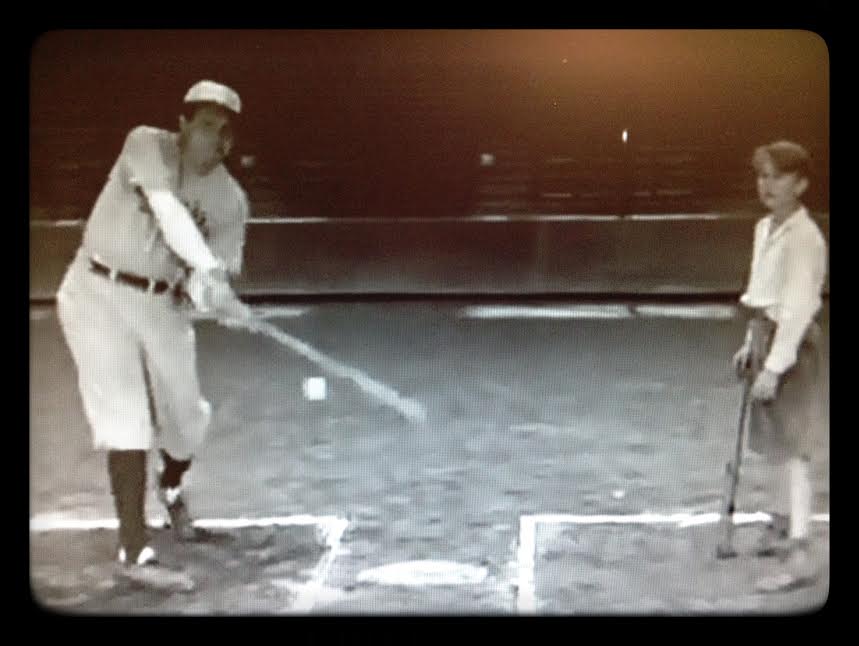 In Ruth’s defense, he had a rough start to life. His parents ran a saloon in Baltimore. His mom was sick and died when Babe was young. His father was busy and found it easier to dump Ruth in a boys’ home than discipline him and make him go to school. All that may help explain him, but it doesn’t excuse him.