Back to the National Museum of the U.S. Air Force

When we visited the Air Force Museum in Dayton, Ohio last November, we didn’t have time to visit the hangar where the presidential planes are kept. It isn’t connected to the rest of the museum, but is actually on the Wright-Patterson Air Force Base. We visited again and went to that hangar first. We had to show a government-issued I.D. and take a ten-minute bus ride to get there.

Our timing was good. They are building an additional hangar onto the museum to display these planes. The one on the base was closing three days after our visit so the planes could be transferred.

The Douglas VC-54C Skymaster was the first plane built for a President. It was officially called The Flying White House, but was referred to as the Sacred Cow. Franklin Roosevelt used it to get to Yalta in 1945. Truman also used it extensively, and it was on board this plane that he signed the legislation that created the Air Force.

For some reason, I didn’t get a close-up of this plane from the outside. It’s the silver one in the left background of this pan.

We were allowed on board. There was a narrow walkway between panels of Plexiglas to keep us away from the furniture, which made photography almost impossible. 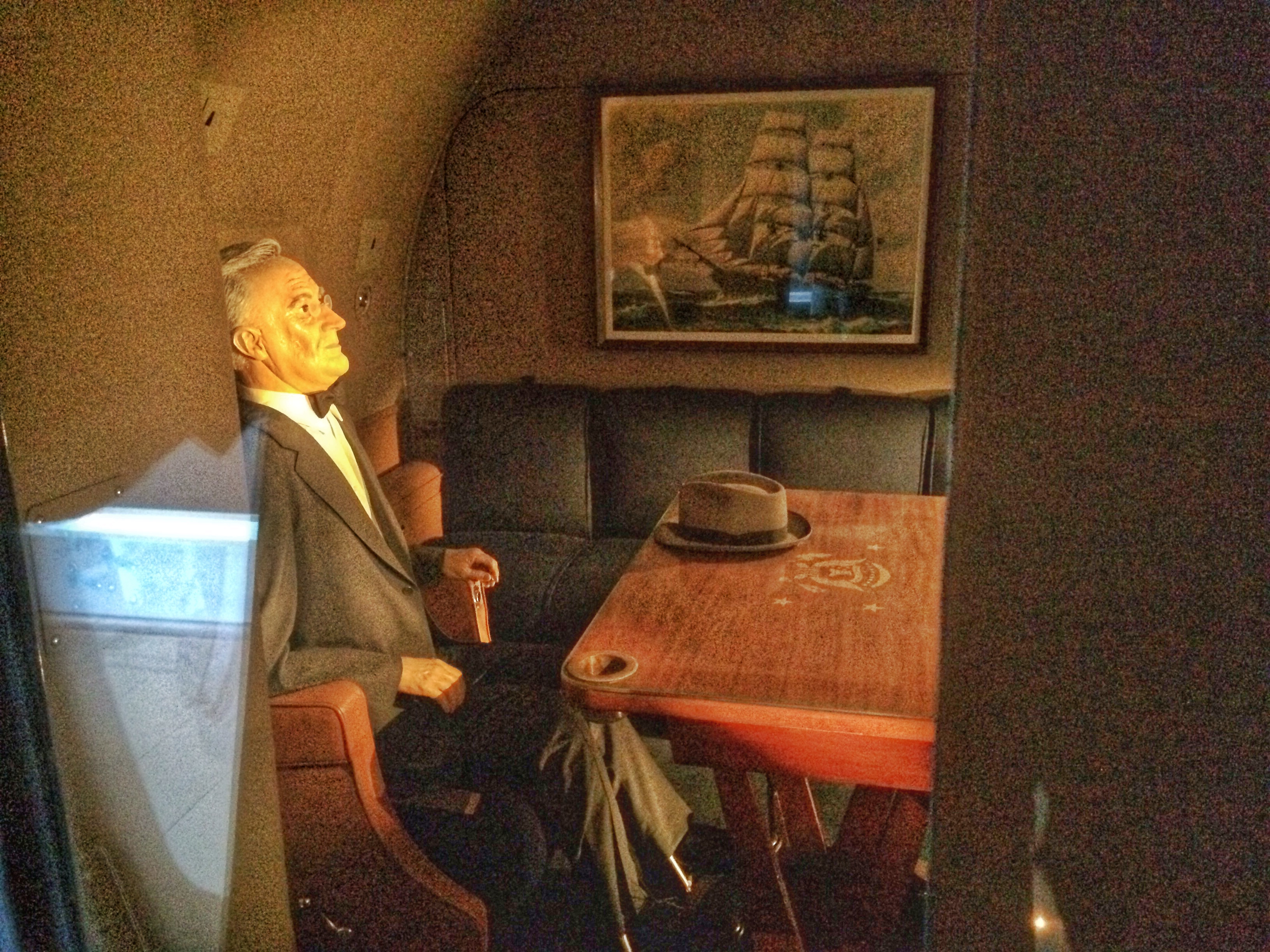 This plane was used for 36 years, beginning in 1962. It flew eight sitting presidents, beginning with Kennedy.

It was on this plane that Lyndon Johnson took the oath of office after Kennedy’s assassination. 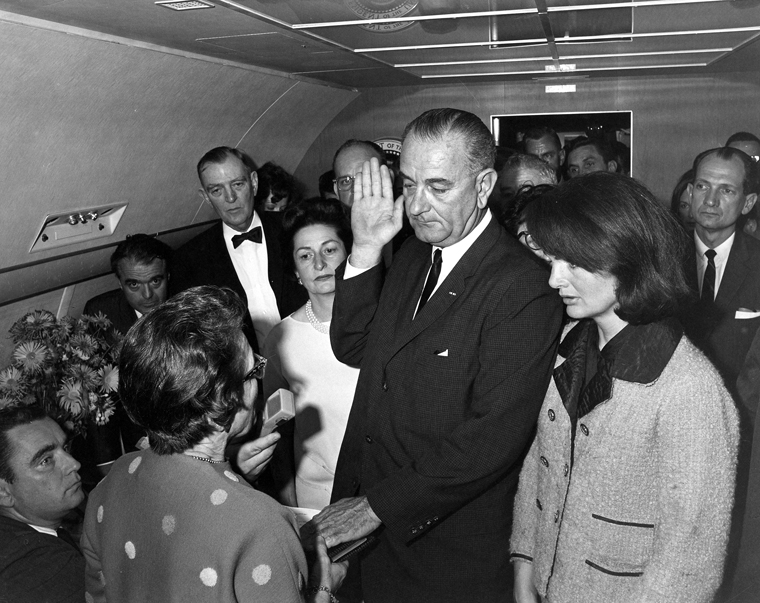 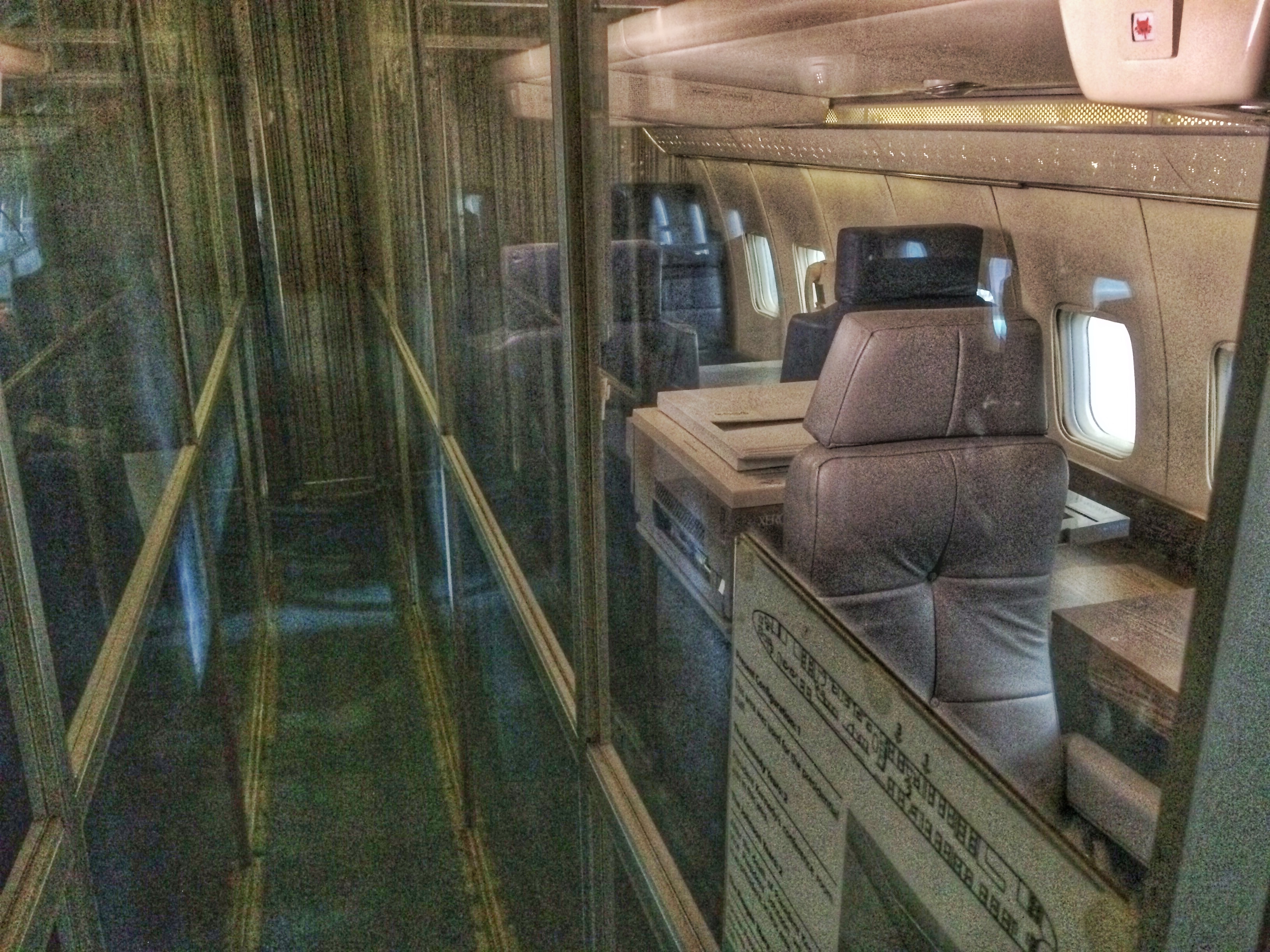 It also flew Nixon to China and Nixon, Ford and Carter to the funeral of Anwar Sadat. Queen Elizabeth flew on it in 1983. 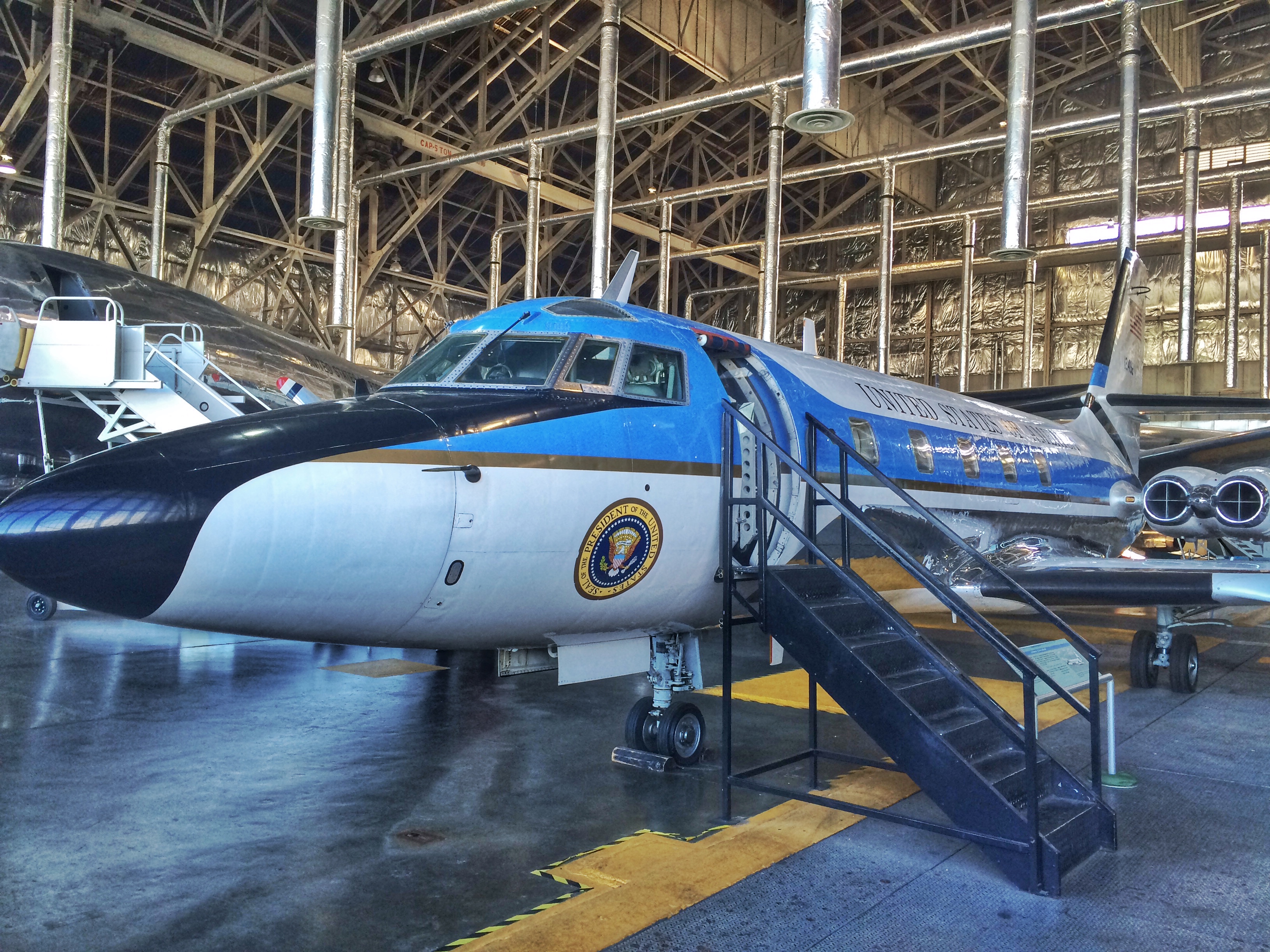 This plane was called “Air Force One” when Presidents Johnson, Nixon, Ford, Carter and Reagan, although, due to its size, Johnson referred to it as “Air Force One Half.” 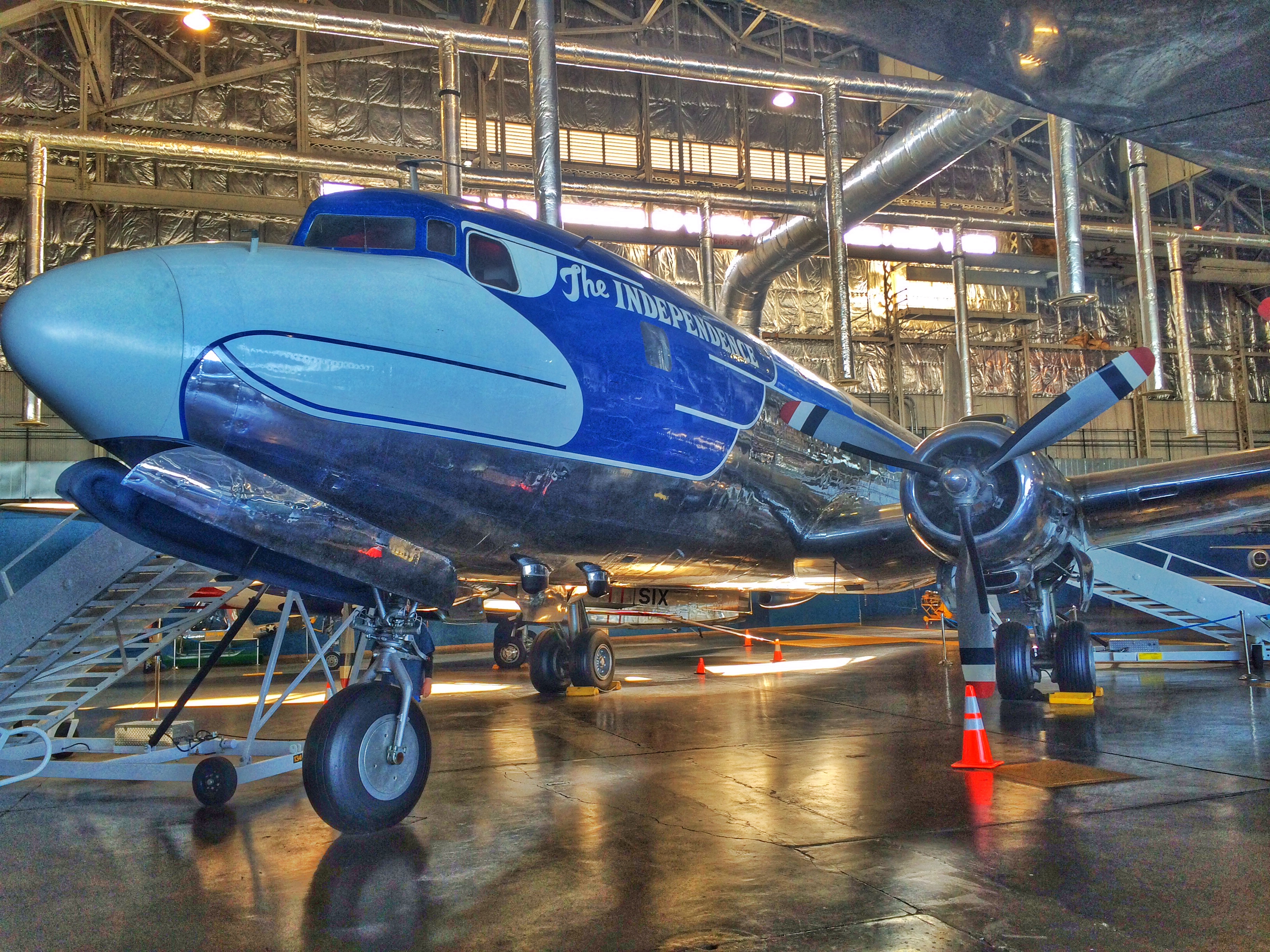 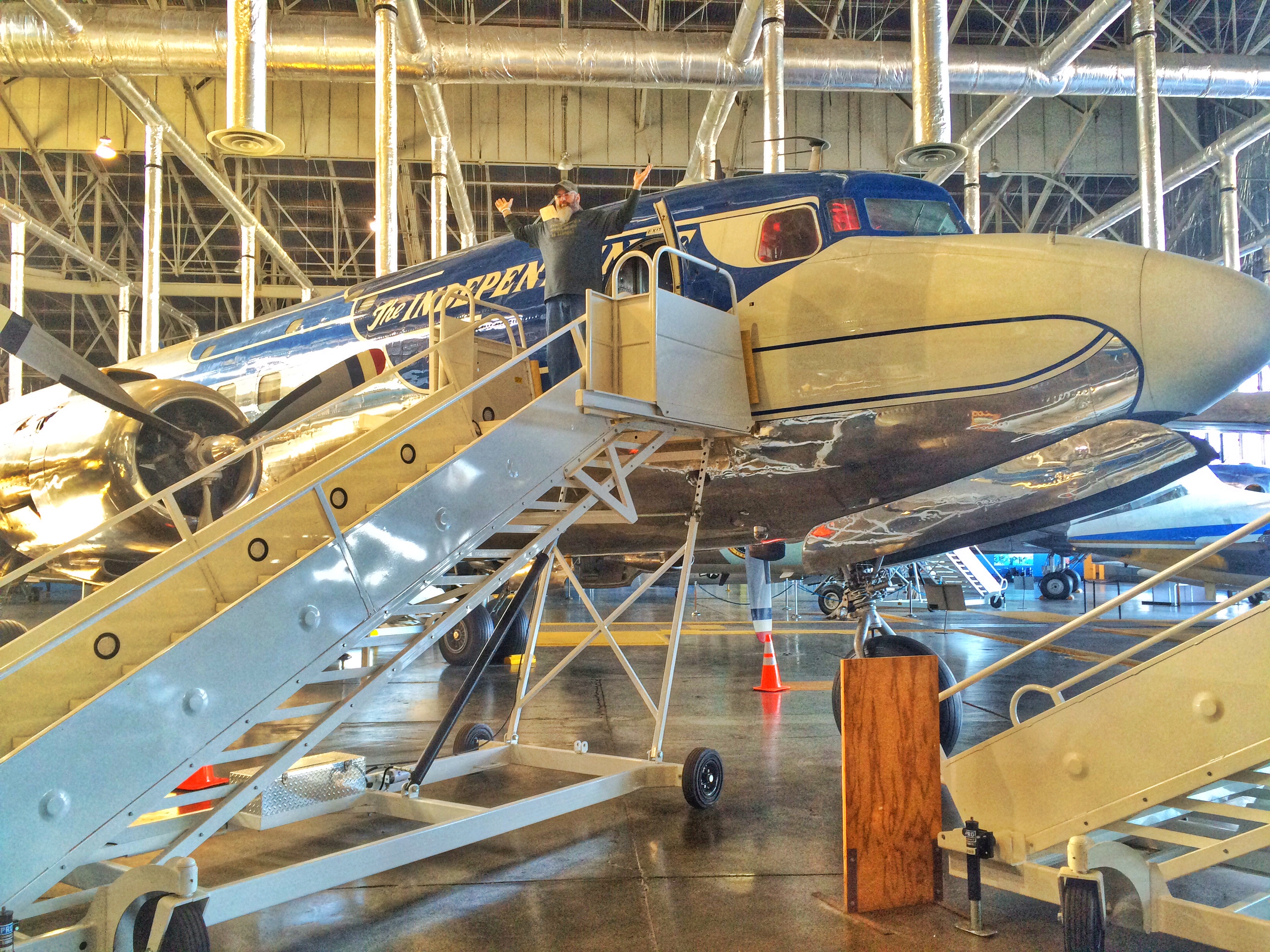 Used by Truman from 1947 to 1953, including his historic flight to Wake Island to discuss the Korean War with MacArthur. 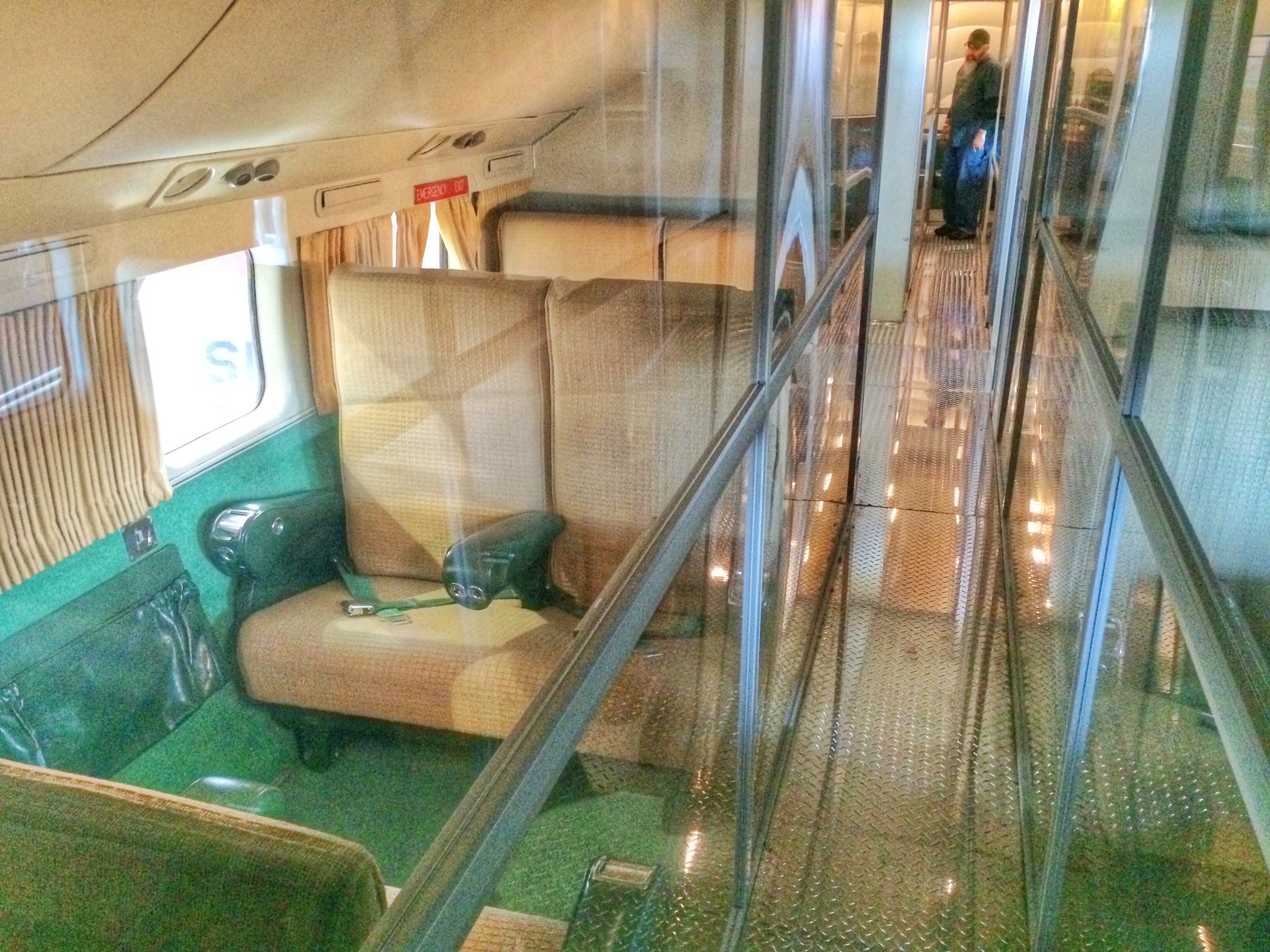 Didn’t get a good picture of this one either. I took the pan at the top of the post from the stairs outside the cockpit, and some of the plane can be seen at the far left.

It served as Eisenhower’s official plane for most of his years in office. 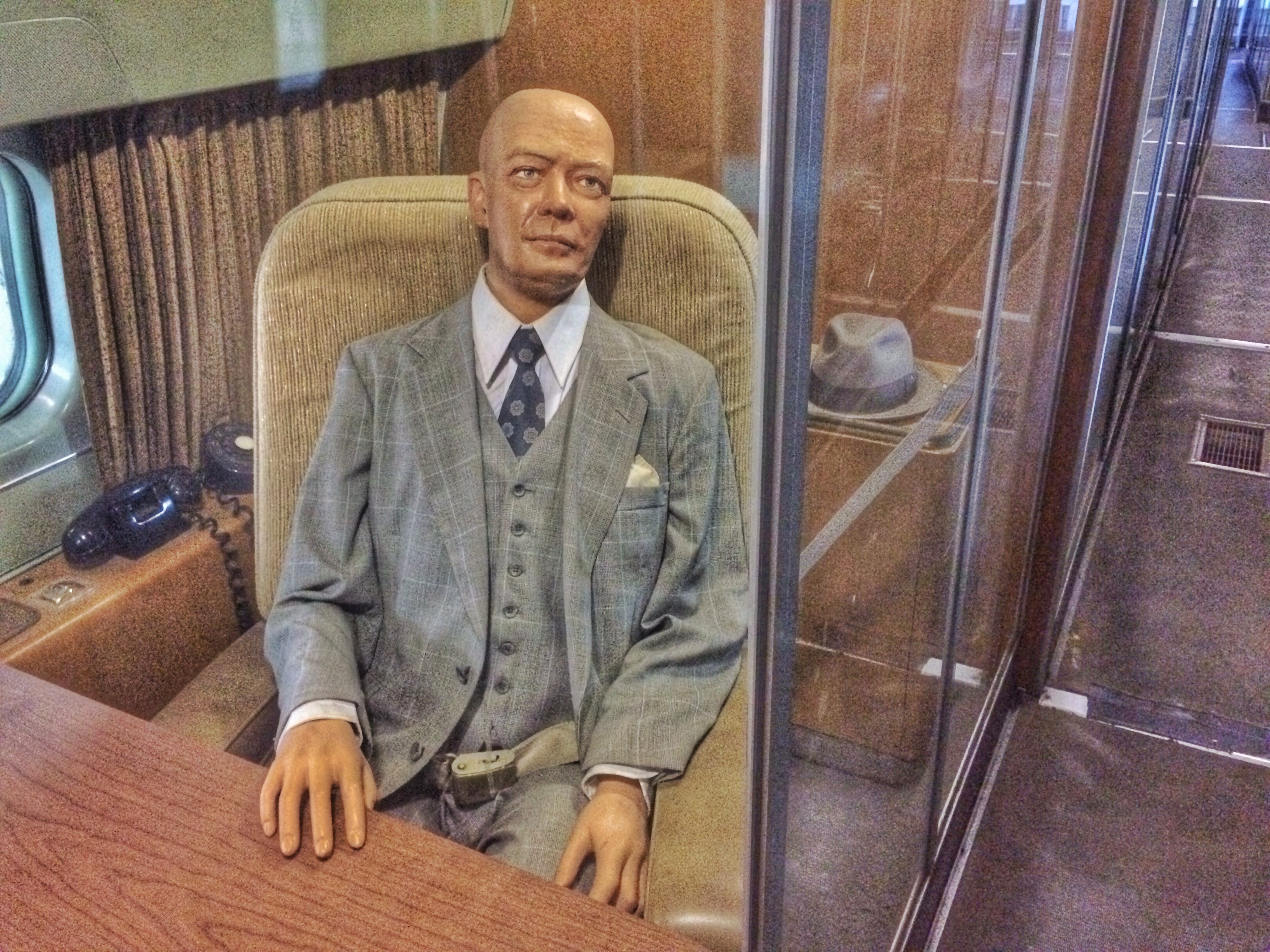 In the same building was the Research and Development Gallery. We were only given 50 minutes to view both hangars and by the time I got to this one, I had to hurry. I was also less focused on these because my interest is in planes with direct ties to history.

This plane was designed to be a “parasite” which was stored in the bomb bay of B36 Bombers. If enemy planes were sighted, the parasite would be released and then later return to hook on to the larger plane. It had no landing gear, but it did have skids for emergency landings. It was tested, but never flew from a B36 or saw any action. 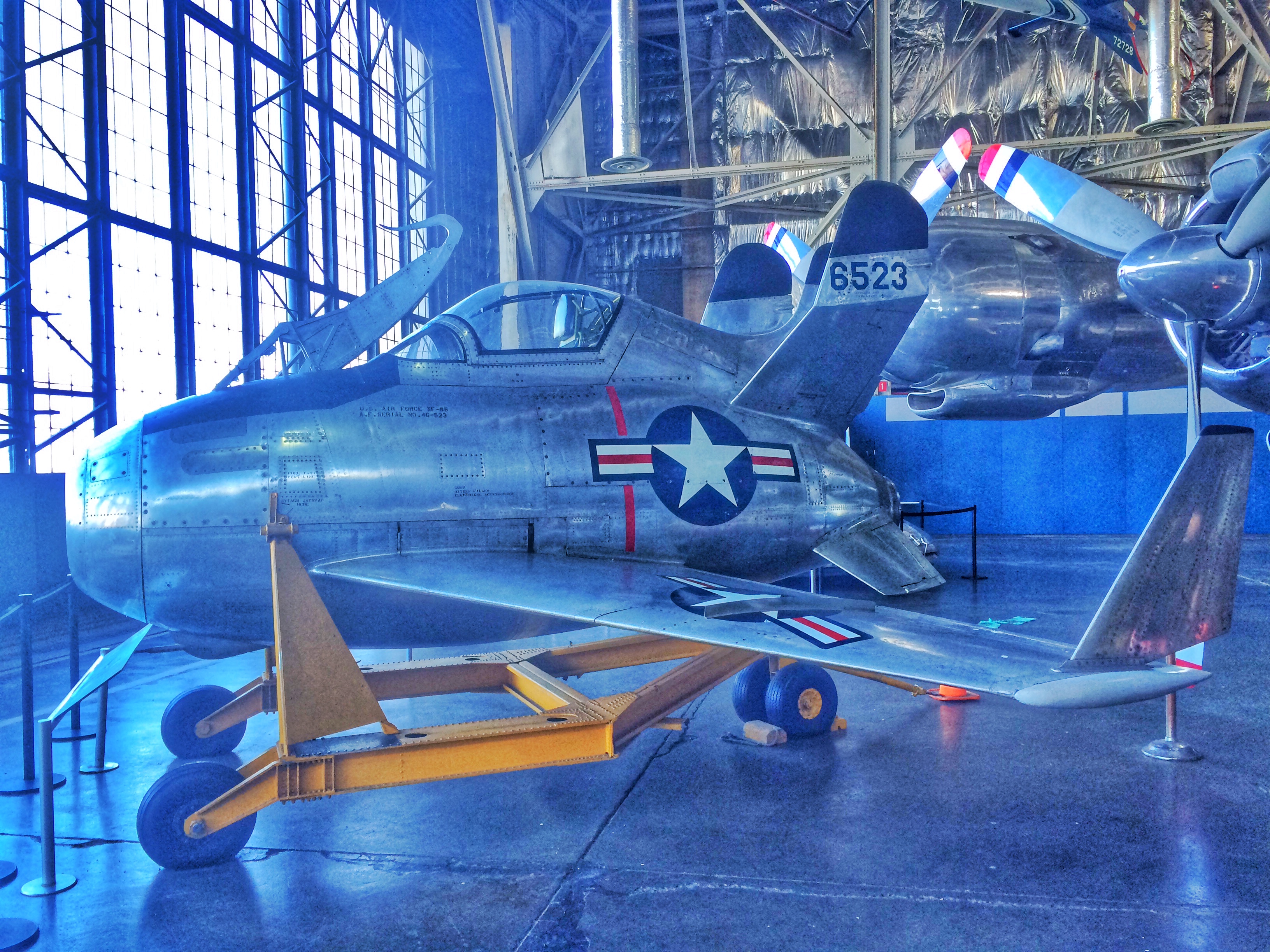 Designed to be carried on a trailer and, when needed, carry one man and use Jeep fuel. It was never used because it made too much noise. 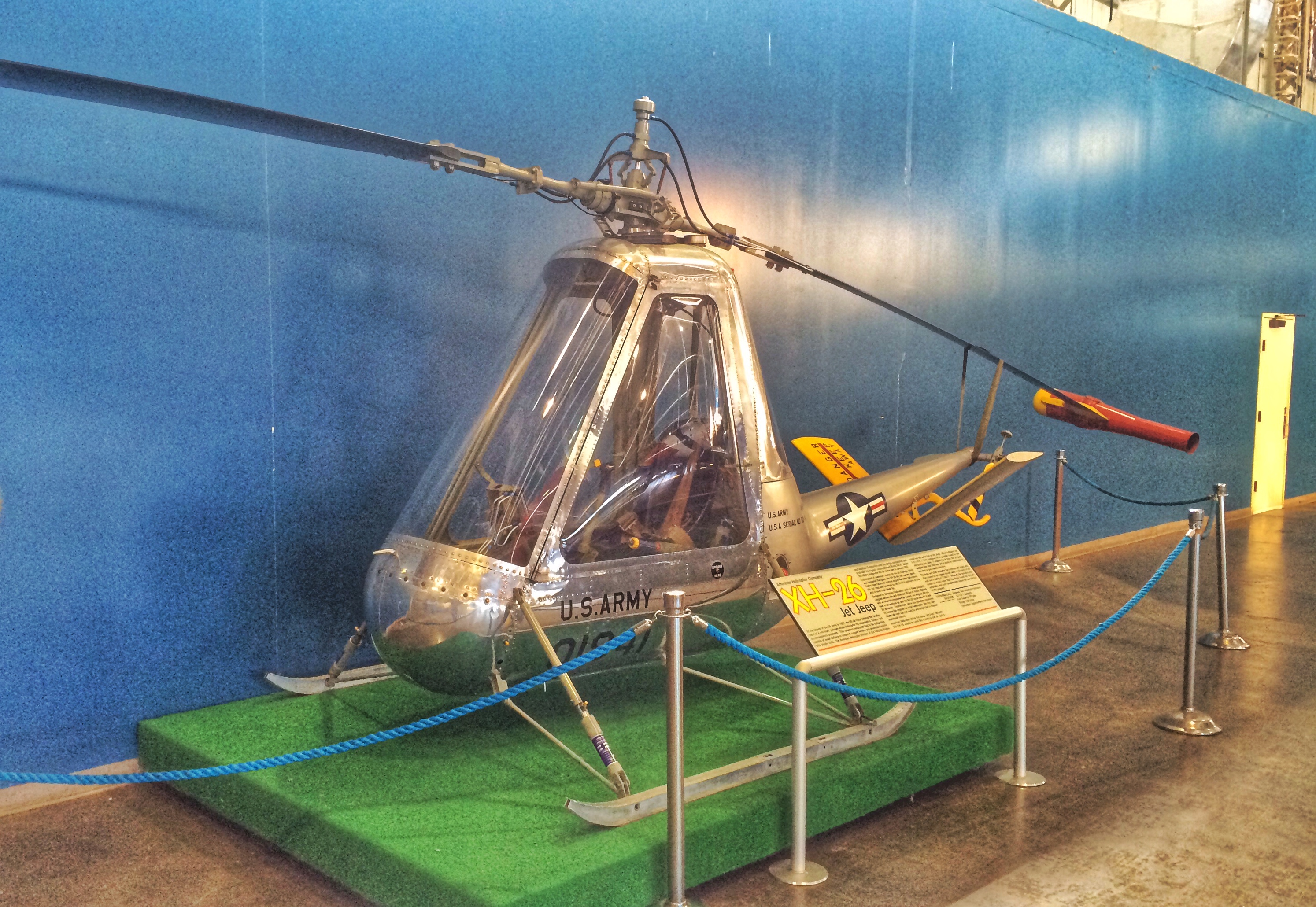 I now believe people when they say they’ve seen flying saucers (although I still don’t believe in aliens visiting earth). 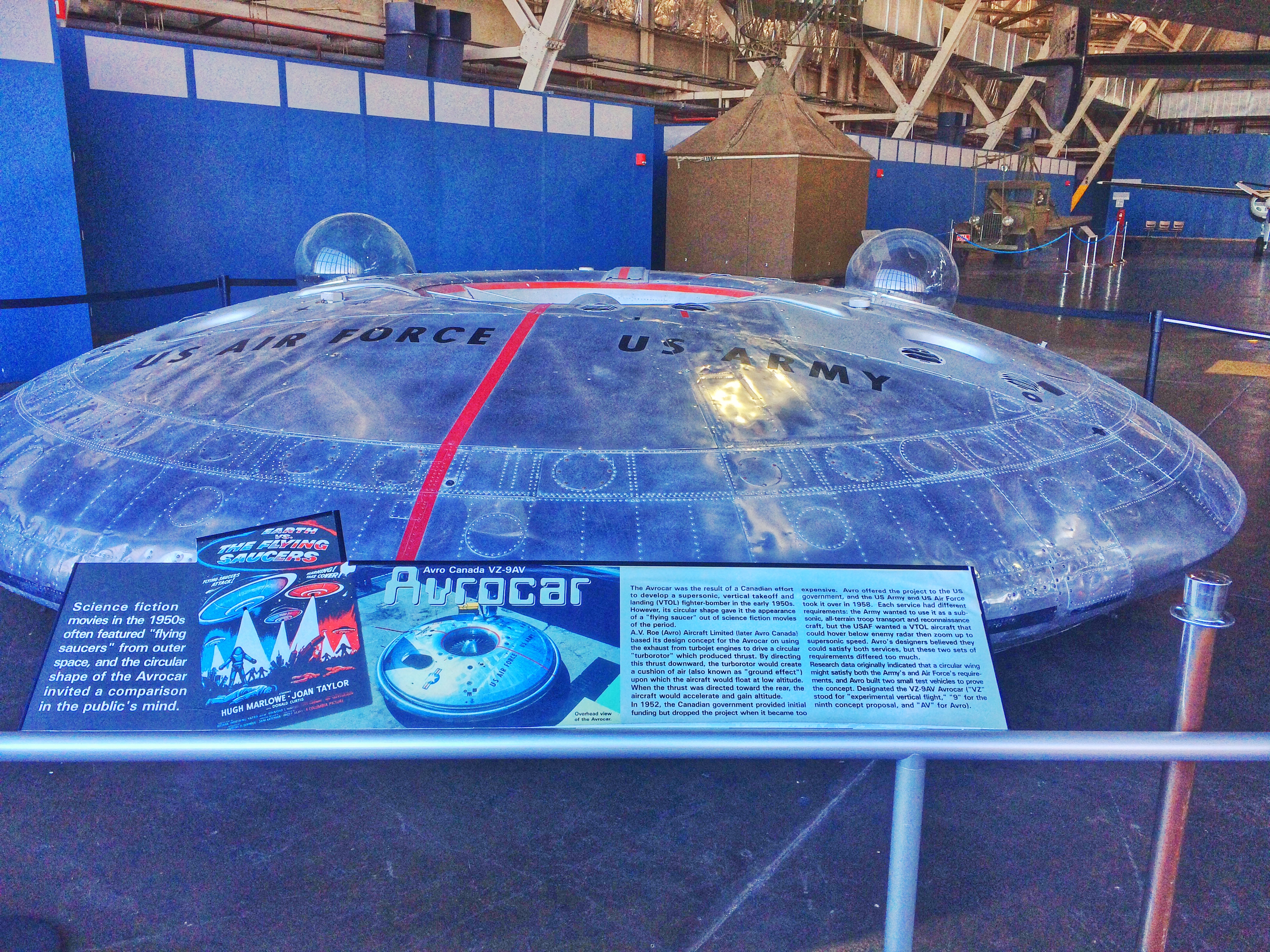 Initially designed by Canada, but the United States took over when it proved too expensive. It was designed to be a supersonic fighter/bomber with vertical take-off and landing capability. It was never put into production because it was unstable more than three feet off the ground. 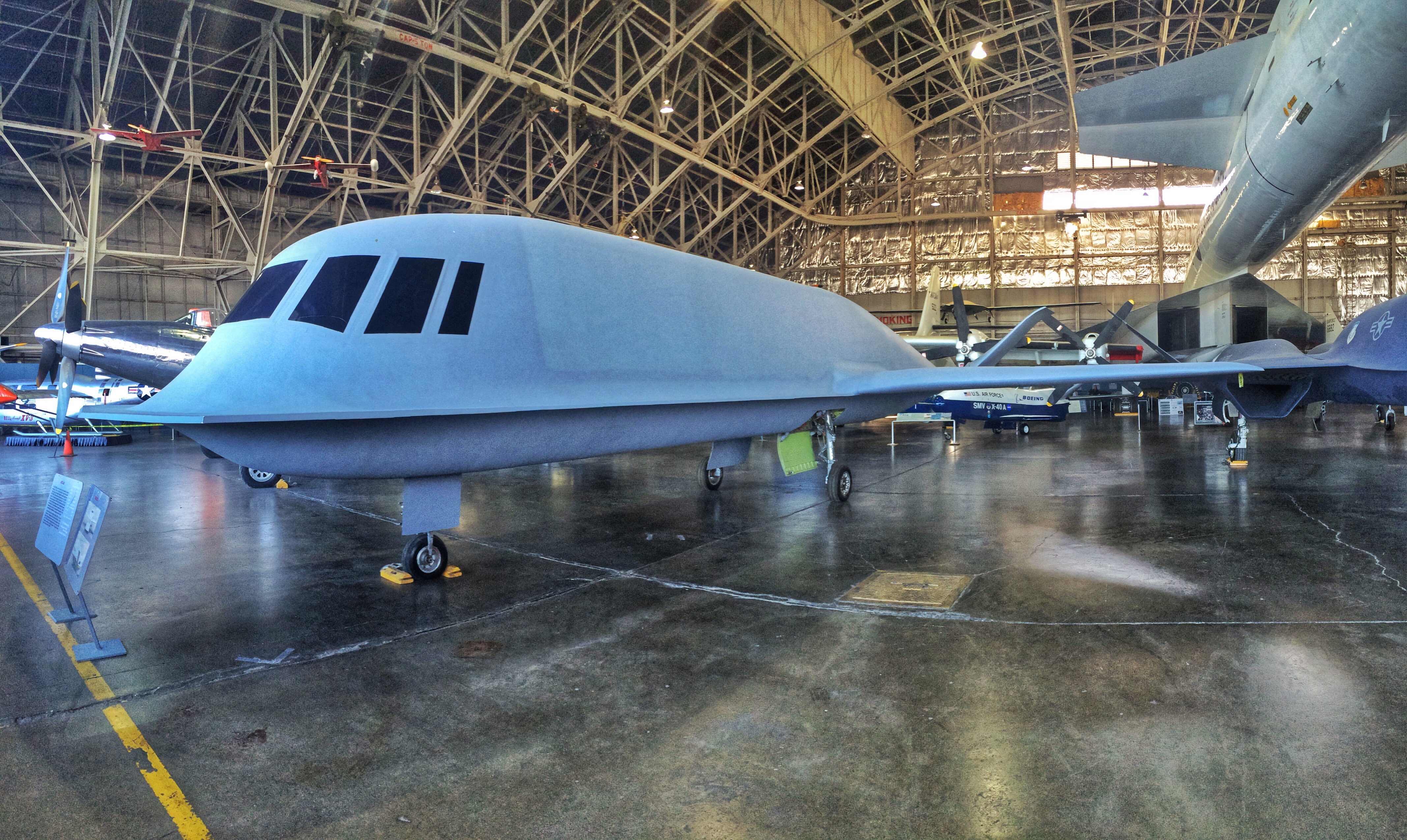 Two of these were built to test supersonic (mach 3) high-altitude bombers. This one flew many times from 1964-1969. The other one crashed. It kinda cracked me up to read that the skin is made from “stainless-steel honeycomb sandwich panels.”

Built as a fighter to counter Soviet advances. Two companies built competing planes. This one was not chosen. 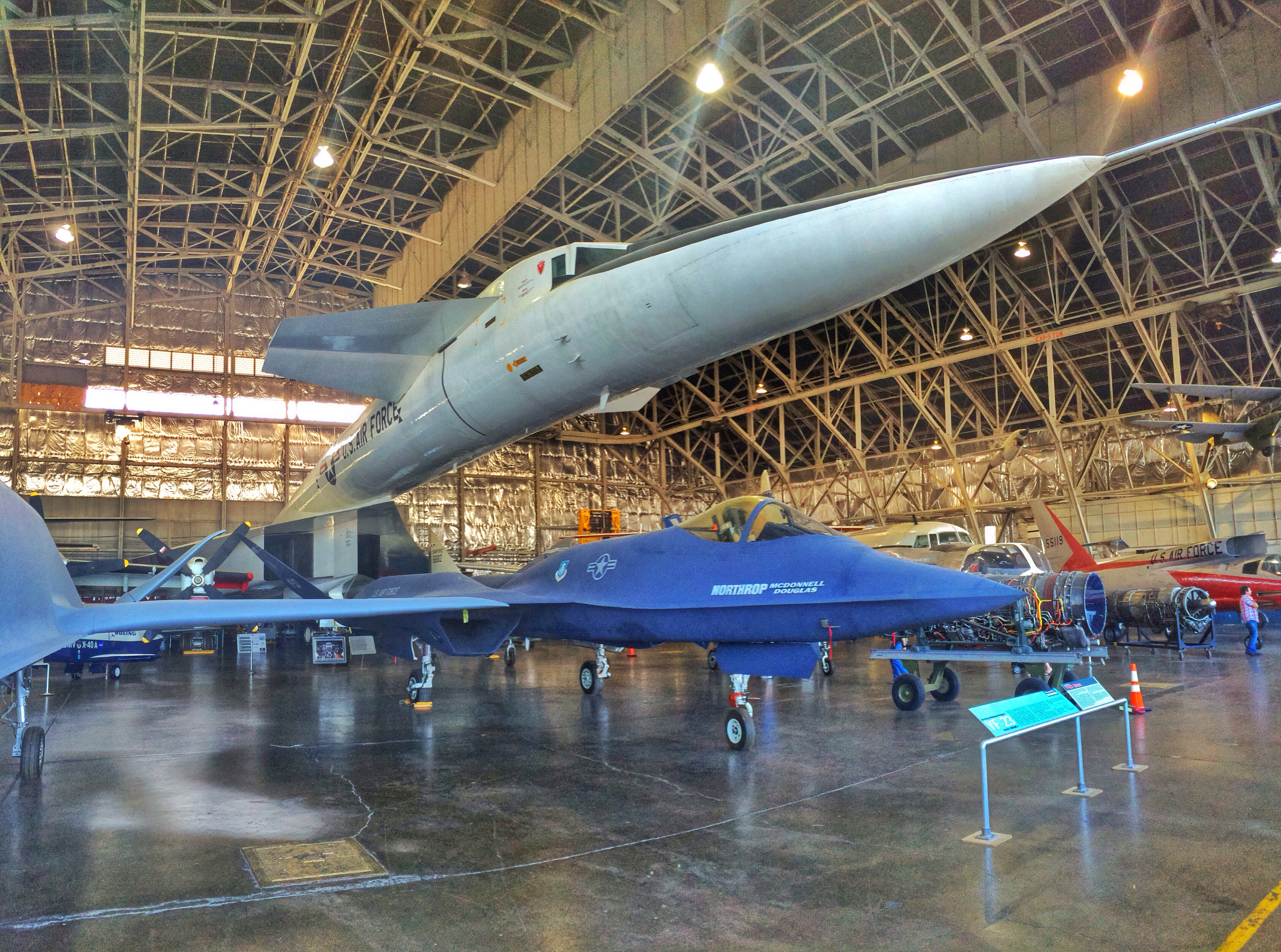 Built to test vertical take offs and landings. It was flown successfully several times in 1957. 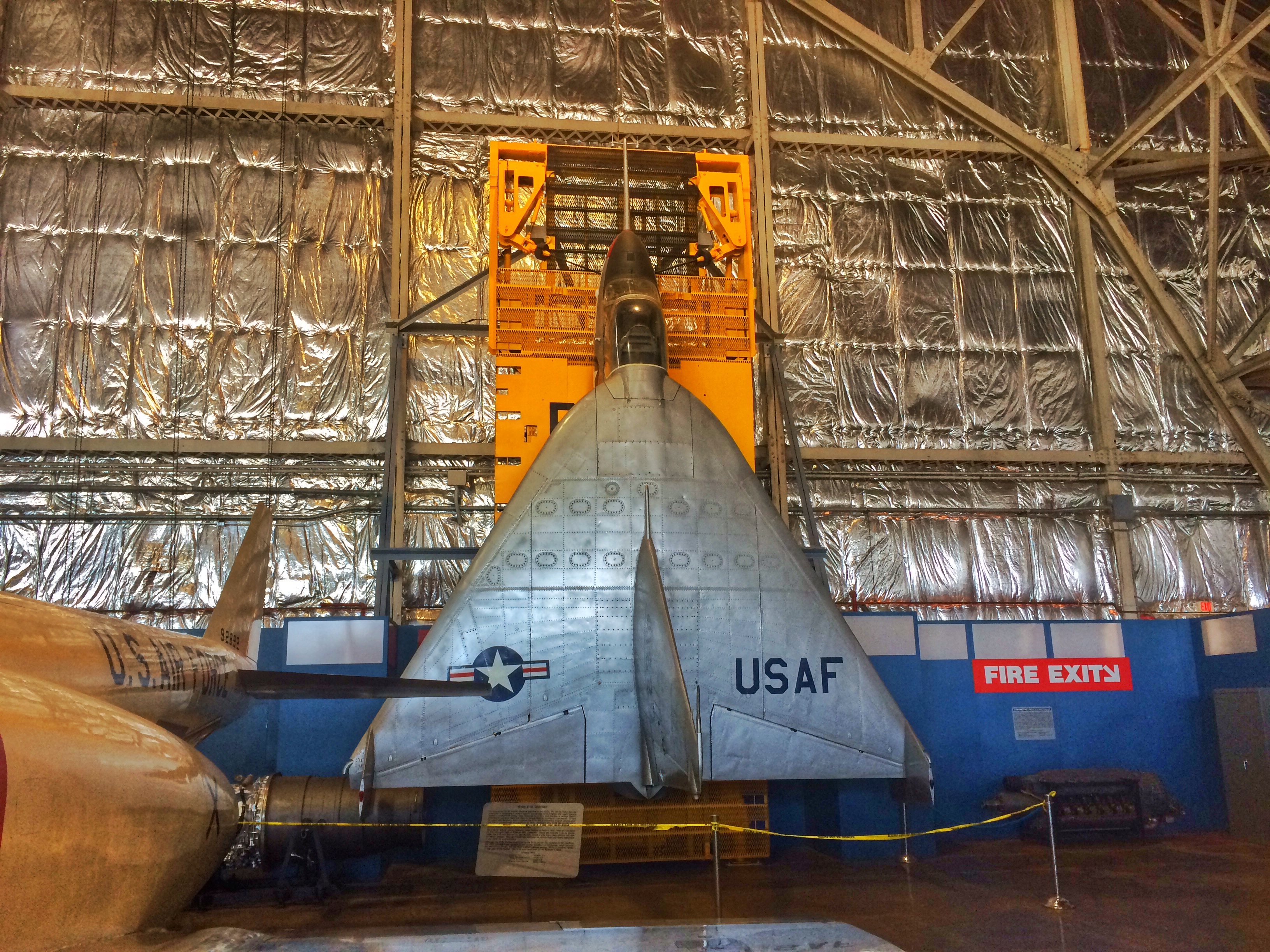 On the bus ride, and again in the hangar, we were told to watch for the aliens in the windows. I looked, but didn’t see them until I asked one of the guides. She pointed way up in a corner to this. 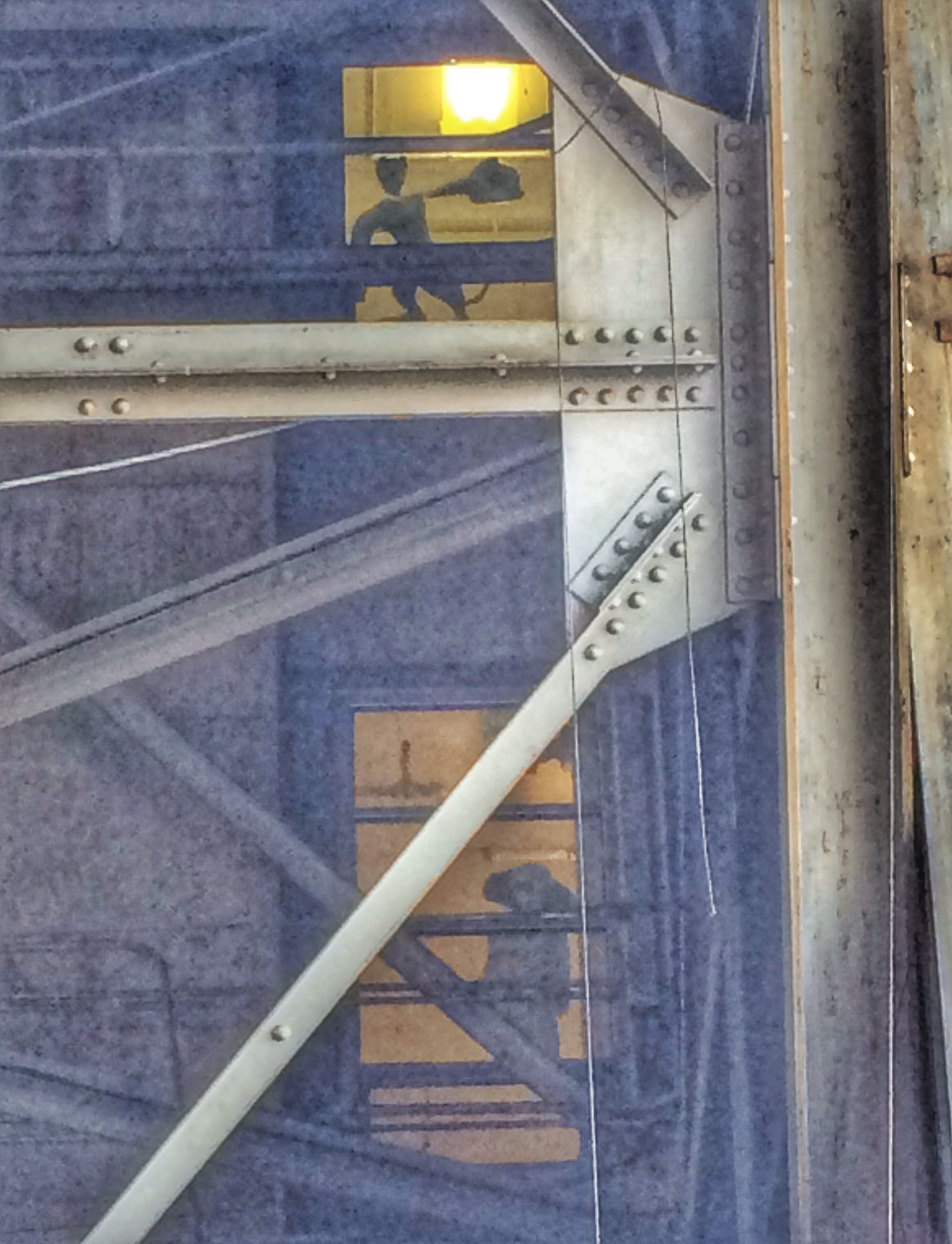 For all that build-up, I was expecting something a bit more exciting.

We spent the afternoon touring the rest of the museum, but I covered that extensively on our last visit, so I won’t repeat any of it here. We also paid $8 each to see a 3D movie called Fighter Pilot in the theater with the largest screen in Ohio. It was 50 minutes long, about an Air Force training exercise. I thought it was spectacularly boring. Much of it was obviously shot in front of a blue screen. This surprised me since everything else in the museum is fascinating.

This entry was posted in Museums, Presidential Sites, Transportation. Bookmark the permalink.