dendroica (from dendron, tree, and oikein, to dwell) kirtlandii (given by Spencer F. Baird in 1852 for Jared P. Kirtland, physician and naturalist of Cleveland)

My wife and I drove up through the Lower Peninsula on Friday and got to Grayling at about 6:00 p.m.  I got up early and drove to the D.N.R. office.  I didn’t know how long it would take me to get there, and I arrived twenty minutes early.  I passed the time by listening to the Kirtland’s song on tape.  When the tour lady showed up, there were about 50 other people waiting with me. We followed her in our individual cars for about five miles to a large field covered with brush and peppered with jack pines about 10 to 12 feet high.

We hiked together on a dirt track into the area and hadn’t gone far before we heard a singing Kirtland’s Warbler.  Someone spotted it singing from the top of a dead tree about 40 yards off the path.  When we all had looked at it for a while, the group moved on in search of another one.  I stayed behind, figuring that a bird in the bush …

It paid off.  A few moments later the warbler flew to another dead tree closer to where I was.  It changed perches every 5 or 10 minutes, singing constantly and wagging its tail.  At one point, it came within 20 feet and gave me a great, unobstructed view.  I had it all to myself.

When the group returned, the guide ushered us out of the area.  I felt good, especially since I had missed it in 1980.

I went back to Grayling on June 19, 2001 with my nephew. We caught the tour, which then left from the Holiday Inn in town.  The guide from the U.S. Forest Service showed us a slide show on the Kirtland’s Warbler. She didn’t seem very motivated. When she led us out to see the birds, she drove about 15 mph over the limit and even passed a slower-moving car, forcing all of us who were following to pass in turn.

We pulled onto a dirt road about 15 miles from town. We were immediately swarmed by clouds of tiny, nasty flies that didn’t hurt when they bit but left BB-sized chunks of blood. These spots, which we had all over our bodies, itched incredibly off and on over the next week. 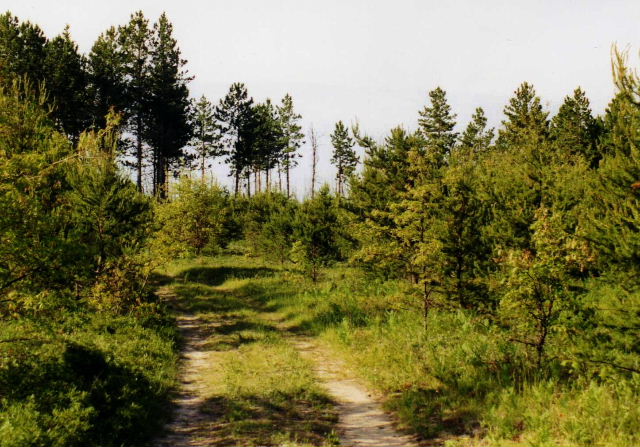 Anyway, we walked down the dirt track through a grove of short jack pines. After going perhaps 100 yards, we heard a Kirtland’s Warbler singing in some taller trees not far off. After looking in vain for a few minutes, our guide took off down the trail at a fast pace. Part of the group stayed at that spot to continue looking for this bird while the rest of us followed the guide. We passed by one singing bird without stopping. A third bird was singing close to the trail. My nephew was the first person to spot it, low in the pines, and he followed it as it darted to another tree. Our guide spotted it from his directions and pointed it out to the rest of us. It was a male, singing repeatedly on the branch of a dead tree about 10 yards away. 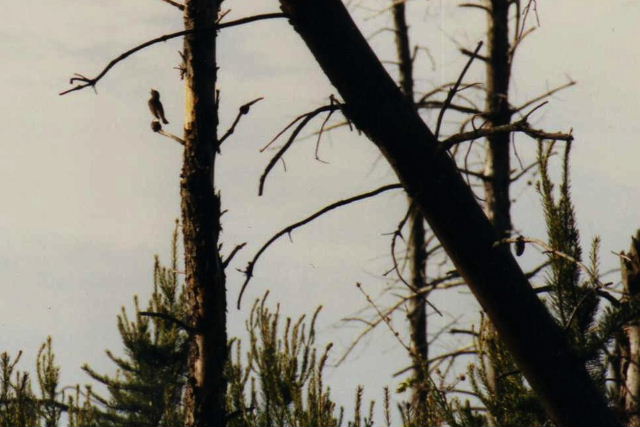 Oddly enough, as I watched it, I heard the guide say “There it is, on the branch right there. It’s not moving or singing or anything.” It was then we realized we were looking at two birds. The male flew off, but the female just perched in the same spot with a worm in her mouth. For the next 15 minutes, all she did was turn around on the branch once or twice. 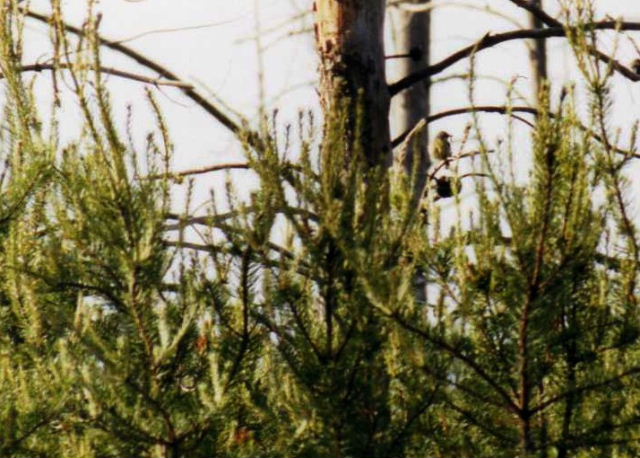 The male popped back into view once in a while, always singing. As soon as we spotted the bird, our guide’s mood totally changed. She was now happy and friendly — and suddenly noticed most of the group was missing. She went back to find them. They had finally spotted the first bird, then left, chased off by flies, no doubt.

The guide came back to where we were and told us she was off to find Brown-headed Cowbird traps. (Cowbirds lay their eggs in other birds’ nests, so they are trapped to protect the Kirtland’s Warblers.) She said we could stay as long as we stayed on the trail. Most of the group left. On the way back to the car, we spotted another warbler in a tall pine along the trail. When we got back to where the first one had been heard, I spotted that one too. Four Kirtland’s Warblers in a half hour — not bad. It even impressed my nephew. When we got back in the car (away from the flies), he shook my hand and thanked me for bringing him along. He said it was something he wouldn’t normally have done but that he really enjoyed it.