dendroica (from dendron, tree, and oikein, to dwell) cerulea (blue)

Encouraged by my success with the Henslow’s Sparrow, I decided to go for the long-sought but never-seen Cerulean Warbler. I checked out Birds of the Indiana Dunes from the Des Plaines Library and read that they can’t be missed on Trail 2 in the State Park. I got to the dunes at 7:00, only to discover that the park didn’t open until 8:00. I drove to Kemil Road in the National Lakeshore and did some exploring. I was at the park minutes after it opened, paid my $2.00 and parked by Wilson’s Shelter. A jogger passed me just as I started on the trail, but I didn’t see another person for the next two and a half hours.

The woods were wet, with a lot of pools and tiny creeks everywhere. The trees were very tall, 80 feet or more (in my estimation), and some of the trunks were four feet across. There were more trees that topped off at thirty feet or so, and a lot of brush at ground level, but not so thick as to be inpenetrable.

I had listened to the song on tape, and heard one singing at Kemil Road, so I knew what I was listening for. I heard one when I had been on the trail about 15 minutes. It was off the trail a bit, and way, way up in the trees. It was ventriloquial, and I kept walking back and forth on the trail trying to zero in on the sound. No matter where I went, it sounded like it was coming from where I’d been.  After ten minutes, it sounded like the bird was moving away from me. I left the path and walked into the woods. Again, I couldn’t pinpoint the sound. I wandered around the area for forty-five minutes, always within ear-shot of the Cerulean, but never sure where it was. I stared up until my neck was aching. I was determined, and I kept on looking, but I hadn’t seen a hint of it when it stopped singing. I hung around for a few minutes, but I didn’t hear it again.

I was discouraged. I didn’t know how late into the morning they would sing.  I wandered down the trail. About 15 minutes later, I heard another one singing right above the trail. I thought I could tell where the sound was coming from, but I couldn’t see anything. I was going nuts. It was right there, but I couldn’t find it. It moved into the woods, and I followed. I entered an open area where a big tree had fallen. The singing was coming from a tall tree that bordered the small clearing. To save my neck, I laid down on the trunk and stared upward. I finally spotted a bird and zeroed in. Cedar Waxwing. I was ready to scream. Five minutes later, the Cerulean stopped singing. I slogged on down the trail. 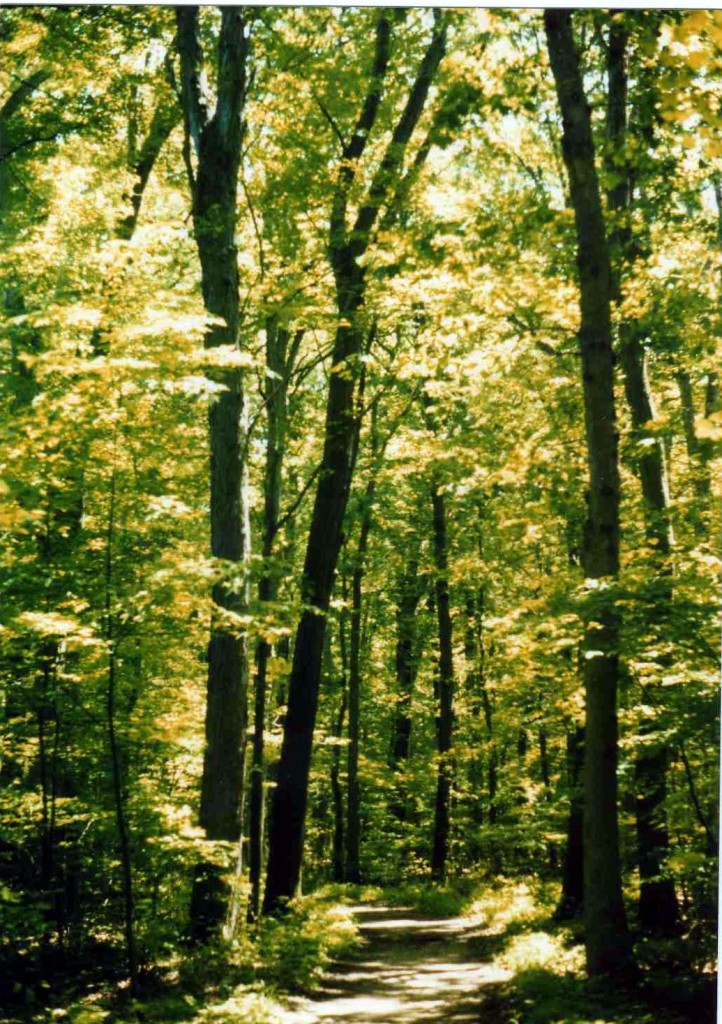 I had gone about 50 yards when I wandered into an Ovenbird’s territory. It was circling around me, flitting through the brush and calling. While I was watching it, I heard a Cerulean Warbler singing back where I’d been. I think it was the same bird I’d just been searching for. I went back to the spot, looked up and … surprise, surprise. There was a Cerulean Warbler. It was about 35 feet above me, flitting through the branches of a shorter tree. I had a split-second glimpse of white undersides and a black chest band, and then it disappeared into the foliage. I shortly spotted it again. It was moving rapidly, stopping every few seconds to sing. A minute later, it flew to an exposed branch in another tree, about 45 feet up. I managed to follow it to where it landed.

It started preening, giving me good views of its bright blue cap and dark side streaks. And now that I had my bird, my neck couldn’t take it any more. The bird looked like it was going to stay in the same spot for a while, so I laid down on the path and looked up at it. It continued preening, but every ten seconds or so it would pause to sing. It went over its chest and side feathers, giving me a brief look at a white wing bar. It didn’t stay long, and soon disappeared.

I was happy. Taking off a day from work, getting up at 5:00 a.m., driving for two hours, swatting mosquitoes, chasing an elusive noise through the woods, a seriously sore neck had all been worth it. I went away with an appreciation of why I had never “just happened” across one.