I checked out the Wisconsin hot line and saw that the Barrow’s Goldeneye has been seen regularly at Virmond Park again this winter. Surf Scoters have also been seen there recently. That was enough for me. Surf Scoters are one of the birds on my target list.

I drove up on Interstate 43 and got there at 9:00 a.m. I immediately noticed it was windy. It wasn’t off the lake, but it had plenty of space to build up speed crossing the field behind me.

The lake below the 300-foot high bluff was coated with ducks. The vast majority of them were Greater Scaup, probably about 10,000 of them. There were maybe 500 Common Goldeneyes, further out than the scaup. I walked up and down the bluff, scanning for a Barrow’s Goldeneye and trying to find a place out of the wind. I was unsuccessful on both accounts. After an hour, I could no longer feel my fingers. 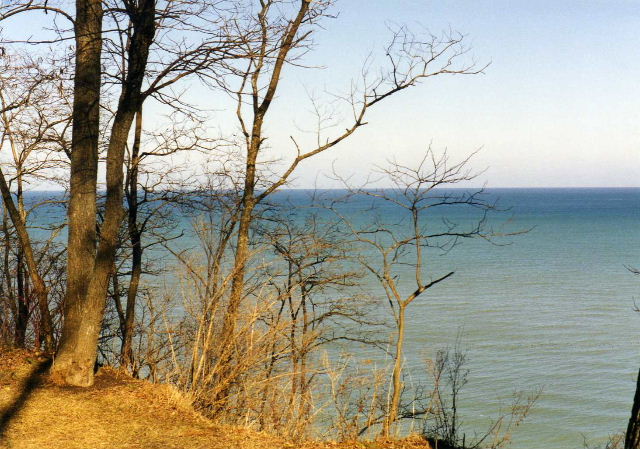 I drove the 15 miles or so up to Port Washington, supposedly a good place to see gulls. There wasn’t a gull in sight, and not much else. (I found out later a Black-legged Kittiwake was there the day before.) I was warm once again, so I drove back to Virmond Park.

It had gotten a bit warmer, or the wind had died a bit, so my discomfort level was slightly less. I walked along the bluff again, but didn’t see anything I hadn’t seen before. Besides the cold, the wind was also shaking my scope around a lot.  In frustration, I plopped it down in the lee of a not-very-large tree and leaned back against the trunk. I looked through the scope at whatever it happened to be pointing at and saw … a male Surf Scoter. A female was swimming next to it. A third bird that looked very similar to the female, but without any obvious markings on its head, was with them for part of the time. They were facing north, about 150 yards out, beyond most of the scaups and goldeneyes. They drifted for the first 15 minutes or so, then tucked their bills into their backs and slept. Later, they were swimming again and diving frequently, staying under about 20 seconds at a time.

The male was jet black, with a bright white spot on the back of the head and another round one the forehead. Its long bill was bright orange, with a white section close to the base. The slope of the bill continued to the top of the head in an uninterrupted line. Its legs were orange. I couldn’t see its eye, and the black part of the bill blended into the facial plumage. The female was duller brown. It also had a white patch on the back of the neck (starting below the dark cap and extending down almost to the back) and another round one on the cheek.

I kept looking for the Barrow’s Goldeneye (without luck), but checked back on the Surf Scoters from time to time. At around 1:00, another birder showed up. I told him about the scoters, and he set up his scope. A few minutes later, he said, “It’s a White-winged.” We switched scopes and he used mine to see the Surfs and I used his to see a lone female White-winged in among the scaups.

I never could find the White-winged with my (much inferior) scope, but the Surfs were still there when I left around 2:00.