On Tuesday, we drove east across the Upper Peninsula to Seney. I’ve always wanted to visit there, but never had a chance. The part of the refuge we were in was laced with large pools separated by swamps and strips of trees. The water level is manipulated to make it attractive for waterfowl. Trumpeter Swans were reintroduced on the refuge in the early 1980’s and have flourished. There are now over 400 in the state and almost 200 on the refuge. At least 18 pairs are nesting there regularly.

We walked the Pine Ridge Nature Trail behind the visitor center. I was watching for swans. The trail skirted I-Pool, and I soon spotted a white speck about 400 yards away. I could tell it was a swan and knew it was a Trumpeter, but couldn’t see any field marks, of course. It was preening its back feathers next to a bed of reeds along the shore. A few minutes later, two others flew over the pool. They landed near the first one, but were soon chased off. They flew past us, about 100 yards away, then a few minutes later flew back in the other direction, now joined by a third one. We heard their trumpet notes a few times, sometimes singly and other times doubled. This was the point when I decided to consider them a lifer. 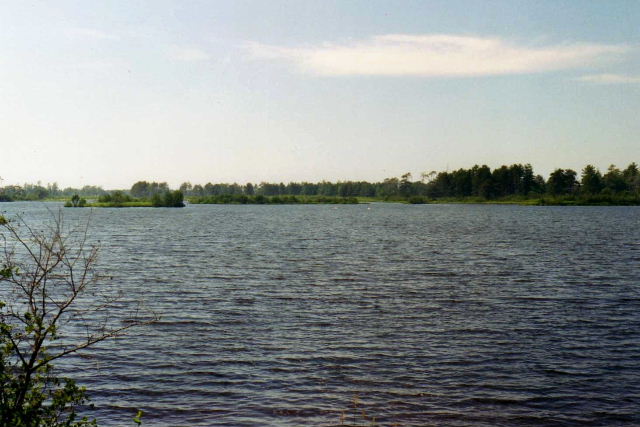 A side trail bordered the pool. We walked along it a ways and got a little better look at the first swan. I soon spotted a second adult and at least five babies in the reeds behind it. After walking the trail, we drove the Marshland Wildlife Drive. We soon spotted two adults with two young on F-Pool. We got out of the car to take pictures and get a better look. After that, we began seeing them all over. We passed a few that were feeding within 15 yards of our car. Two were tipping bottoms-up in deeper water. Others had just their entire necks and heads under the surface. One group of six were swimming in single-file, evenly-spaced across a swamp. At another time, in E-Pool, we saw 38 at once, scattered in groups and singly across the area. 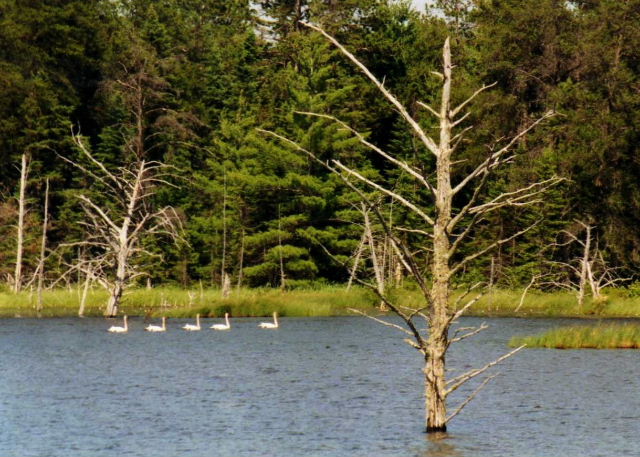 They were huge, especially in flight, and very pretty. Many that we saw had their heads and necks stained rust by the water. We could spot them way off against the darker green background of the woods and reeds.