I had three target birds — Mountain Bluebird, Mountain Chickadee and Williamson’s Sapsucker. Within an hour and a half, I saw all three.

I was at the park when the gate opened at 7:30. Several construction workers were building a new visitor center and an older couple arrived as I was leaving, but apart from them I had the place to myself. I started wandering the trails and found myself on the Petrified Forest Loop. (I have no interest in fossils, so I never read any of the signs to find out what was significant about the place.) Two Pygmy Nuthatches and a Red-shafted Flicker grabbed my attention. I was watching one of the nuthatches climbing out on the one remaining limb of a dead pine stump. All of a sudden I realized I was looking at a different bird.

A lone female Mountain Bluebird was sitting in a pine just above the dead branch. Moments later I found a male on the dead branch about a foot below her. They were watching me, sitting motionless. We were in an open grove of pines that covered about an acre on a little knoll in the middle of a meadow. Off to the east, Pike’s Peak looked huge. Other mountains and rock formations stuck up wherever I looked. It was an awesome place to see an awesome bird. 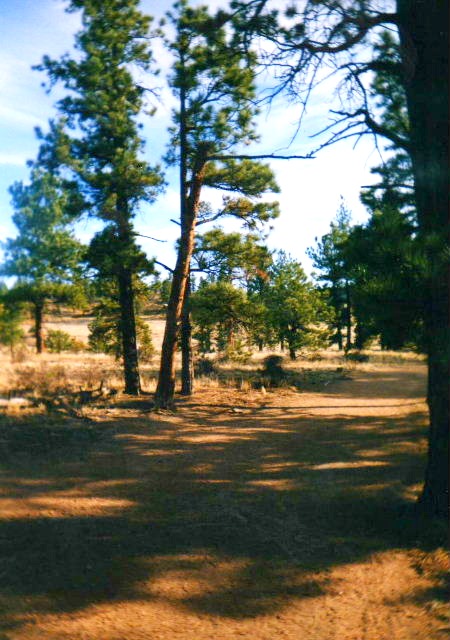 After a few moments, the two Bluebirds flew down through the grove and landed in the tops of three-foot pines at the edge of the grove. At that point, I was distracted by a flock of Clark’s Nutcrackers. About 10 minutes later I was walking across the meadow. I saw the Mountain Bluebirds in small shrubs in the open. The female took off after a large flying bug. She missed on the first attempt but I think she got it on the second try. At the same time I was watching them, I spotted a pair of Western Bluebirds sitting in the top of taller pines nearby. The two species seemed to be hanging out together. Two hours later when I was returning to the car, I saw all four birds in an open area of pines on the other side of the knoll. They were flitting down to the ground and back up to open perches in the manner of bluebirds everywhere.

The male Mountain Bluebird was sky blue, a bit lighter on the breast and belly. The female was a light pearly gray with sky blue on her wings and tail. Neither had any rufous coloring anywhere. Both seemed slimmer and trimmer than Eastern or Western Bluebirds.