After watching the California Gulls and White-faced Ibis for a while, I walked along the shore of the lake. I soon came to a bluff of white rocks that rose about 50 feet above the Southshore Marina. I climbed up on the rocks and walked across the dry hard ground between the clumps of vegetation. 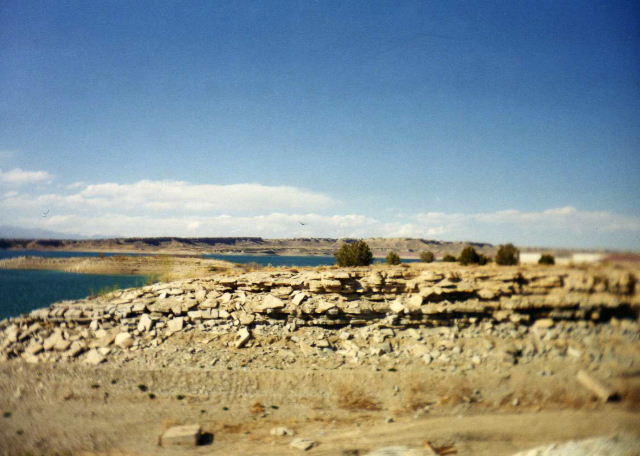 Two pheasant-like birds flushed from about 10-feet in front of me and flew about 50 feet to the bare rocks on the edge of the bluff. One of them disappeared over the edge. The other stopped in the shade of a small bush. As I got closer, it also walked down over the edge. I followed and didn’t see them anywhere at first. I soon spotted them about 60 feet off to my right rear, running over the rocks into the brush.

Later I saw several more. One was along the edge of the road near the Juniper Breaks picnic area. Another pair ran off into the shrubby field by the Northshore Marina. A third pair was walking along the dirt on the flats along the lake. All off them were moving away from me, but not in a panic. They walked quickly, fully upright, looking around with jerky motions of their heads.

They had buffy crests with white tips that stuck up to a point. Their backs were flat brown. Their sides and bellies were mottled brown and sandy white. It looked like they had gray scales on their breasts and hind necks.