This Sharp-tailed Sandpiper was first spotted on Tuesday afternoon. When IBET reports came in on Wednesday, I decided to go for it. I took off from work around 1:15 and arrived 20 minutes later. My scope was at home, so all I had was my old binoculars. I was hoping other birders would be there with scopes and let me look. But nobody was around. There were some Pectoral Sandpipers on a mud flat off the canoe launch, but the sun was creating all sorts of glare and I couldn’t tell if the Sharp-tail was among them. After 10 minutes, another birder came by with a scope. I struck up a conversation with him, and he let me look at one bird he thought might be it, but I didn’t think so. I spotted another one I thought might be it, and he let me look through his scope long enough to find it. But as soon as I did, he got real close so I backed off. Before either of us could identify it for sure, it took off down river with another bird and landed on a large mud flat about 150 yards away. We couldn’t get down far enough to get a decent sun angle and the birds were way to far for me to pick out with my binoculars, so I gave up and drove back to work.

On Friday an IBET message came through saying the bird was close to the bicycle bridge about a quarter mile upriver from where I was on Wednesday. It was damp and windy. I parked in the lot and met a woman who said the sandpiper was still being seen. I walked down the bike path to the bridge. There were four birders there with scopes. Two old women and two men. The women left soon after I arrived. I leaned my elbows on the bridge railing and scanned the mud flats with my binoculars. There were many ducks and shorebirds in the area. I very quickly spotted the Sharp-tailed Sandpiper. It was wading in shallow water perhaps 30 yards away and 30 yards from the western shore. It was foraging, dipping its bill into the water. It moved and bobbed rapidly around in a small area. After about 10 minutes, a Pectoral Sandpiper got close and the Sharp-tail took off after it in a flapping run. It then turned and chased another Pectoral. When this one didn’t move fast enough, the Sharp-tail jumped up on its back (rather like it was initiating sex). It chased around the area for a minute or so, then walked up on the mud flat and fluffed its feathers and preened for a few minutes. It then walked back into the water close to where I first saw it and remained there the rest of the time I was in the area.

One of the men asked me if I’d like to see it through his scope. It was close enough for me to see its field marks with my binoculars, but I thanked him and took advantage of his offer for about two minutes. It was very similar in size and shape to the many Pectoral Sandpipers in the area, but perhaps a bit sleeker. It was obviously more rusty brown overall than most of the Pectorals, although there were a few that approached it in this respect. Its cap was decidedly bright rust color, more so than any of the Pectorals. It had a thick, bright white eye line that extended well behind the eye. Its fore-neck and breast were buffy. The buffy area didn’t stop in an abrupt bib effect, and the only streaks were along the side of the neck and up onto the back of the neck and upper back. Its wing feathers had bright rusty edges. There was a white “V” on the back. Its belly and undertail coverts where white. There were fine dark streaks on the undertail coverts. Its legs were yellow. Its bill was dark and sturdy.

Here’s a photo of the very bird that I stole off the Internet. 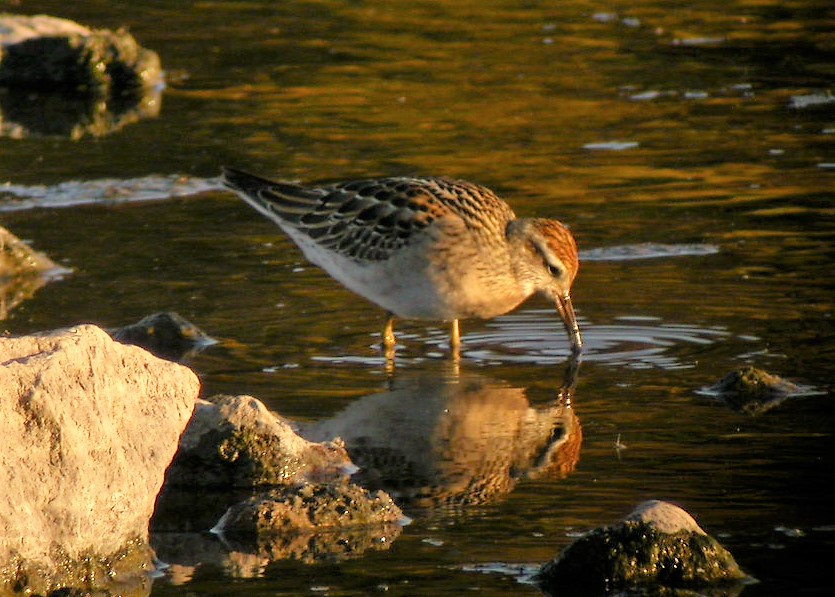