phalacrocorax (from phalakros, bald, and corus, raven) penicillatus (brush, for the tufts of feathers on its head)

I expected to see these and was looking for them. Good thing, because they were a challenge. I spotted maybe 100 of them on a large rock south of Tillamook Head. I could tell by their profile that they were cormorants, but what kind?

I knew they weren’t Pelagic Cormorants (the ones I’d seen earlier in the day) because they didn’t have white on the flanks and because there was a bunch of them. (Pelagic 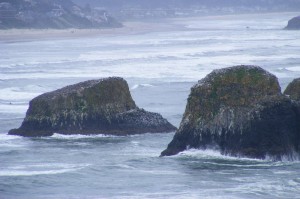 Cormorants are generally solitary.) The other option was Double-crested Cormorants, but after setting up my spotting scope and putting it on maximum zoom, and studying for 10 minutes or so in the lousy light, I finally found one that was preening and facing me. I could see the light-colored chin patch that identifies Brandt’s Cormorant. Later in the day, at Cape Meares, I saw a line of them (another diagnostic feature) fly by low over the water. A lone bird flying past even later in Netarts Bay gave me a great look at the chin patch. In the picture on the right, you can see the Brandt’s Cormorants standing on their rock. The picture below is a blow-up of the same shot. You can’t identify the cormorants, but you can get an idea of how many there were. 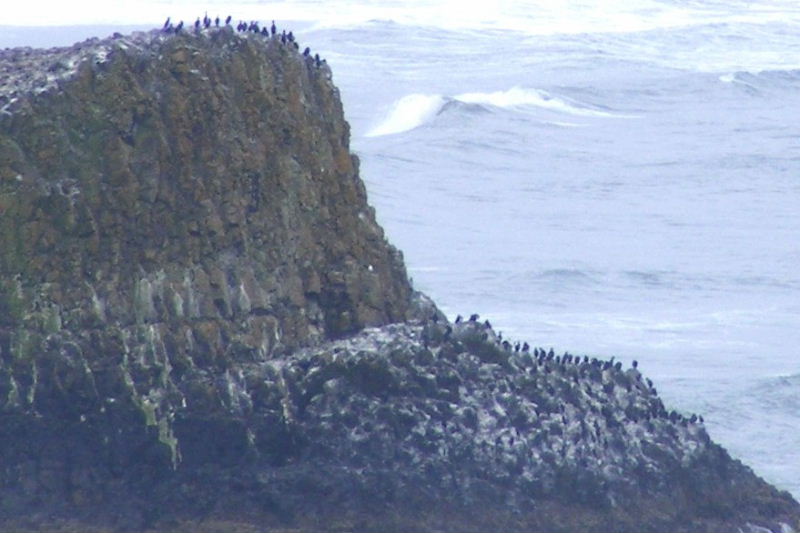