vireo (to be green) huttoni (named for William Hutton, collector)

My 18th and final lifer of the trip. I drove up Larch Mountain Road, hoping to bird in the alpine area at the top. But I was blocked six miles from the peak by snow.

I drove a mile back down the mountain and found a dirt logging road. I walked along it for a couple hundred yards. There were still quite a few patches of snow at that altitude, and not many birds. I did see a couple Dark-eyed Juncos of the “Oregon Junco” subspecies and a pair of Red-breasted Nuthatches.

I also heard what may be the most monotonous bird song — a constant, steady, two-syllable whistle without variation. I could tell the bird was moving through the woods and waited until it approached the road. I got a good but quick look at it — it looked like a Ruby-crowned Kinglet on steroids, if that helps you visualize it any. It had a bold eye-ring with white lores and a thick vireo bill. After 10 seconds or so, it flitted across the road and disappeared into the trees on the other side. I didn’t see it again, but I could hear its song for the remainder of the time I was in the area.

I didn’t get a picture of the bird, but here’s where I saw it. 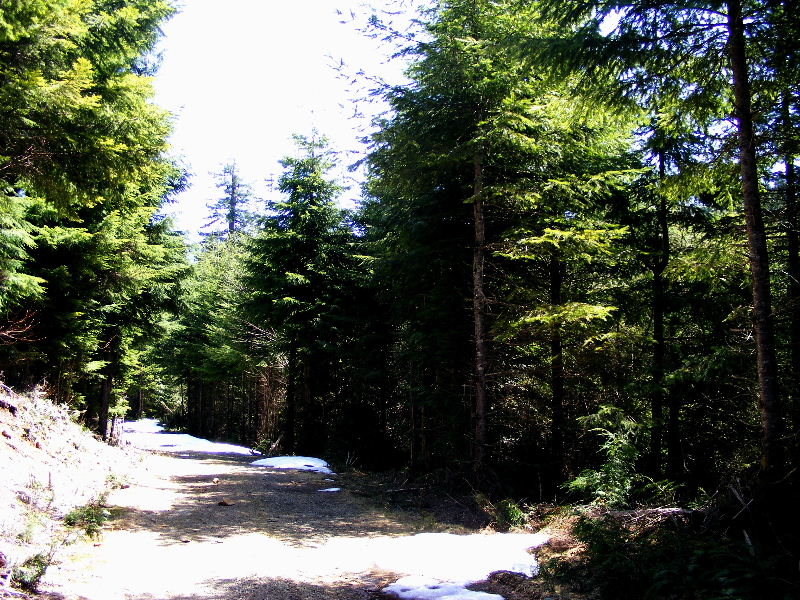