In 2004, it was determined that the four smallest subspecies of the Canada Goose were a separate species, called the Cackling Goose. It is primarily a western species, with only the occasional individual or small group showing up with Canada Geese in the eastern United States. I’d never seen one, in part, because I’d never thought it worth my while to scan each individual in the large flocks of geese I’ve seen. But when I found out I was going to Portland in November, I checked and saw that Cackling Geese were common in the area.

I intended to look for the goose near Salem on Wednesday and then tour Fort Vancouver on Thursday before flying home in the afternoon. But then I found out by boss would be with me and, at the last minute, decided not to take my binoculars or good camera on the trip.

Then on Thursday morning, I made a snap decision to drive about 20 miles north to Ridgefield National Wildlife Refuge and take a stab at seeing the goose with just my eyes and the camera on my phone. The wildlife loop at the refuge is only about three miles long. There were a lot of birds around. During the half hour it took me to make the loop, I saw

Not a bad list for someone with no binoculars who never got out of the car. I also saw two flocks of geese, one of them quite large. But they were too far off for me to see any details. I figured they were probably Cackling Geese because their calls sounded higher-pitched than the calls of Canada Geese, and I found out later that that’s almost certainly what they were. But I couldn’t be sure, so I didn’t count them.

I drove south to Fort Vancouver on the Columbia River just across from the Portland Airport. And there, on the grass along the runway of Pearson Field next to the Pearson Air Museum in the park, was a flock of probably 500 geese. 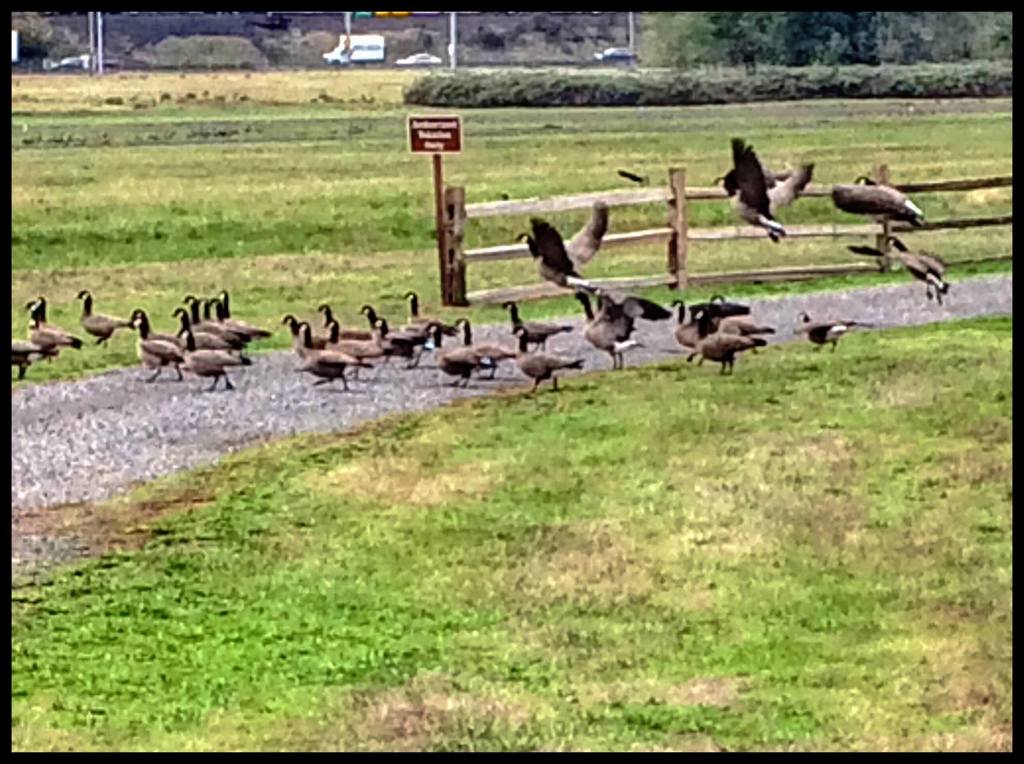 I walked slowly toward them for a better view, but they kept walking, or flying, off before I could get a great photo. They certainly seemed smaller to me, and their heads looked round and the bills stubby. I finally got some fairly good photos with my camera as part of the flock flew past. 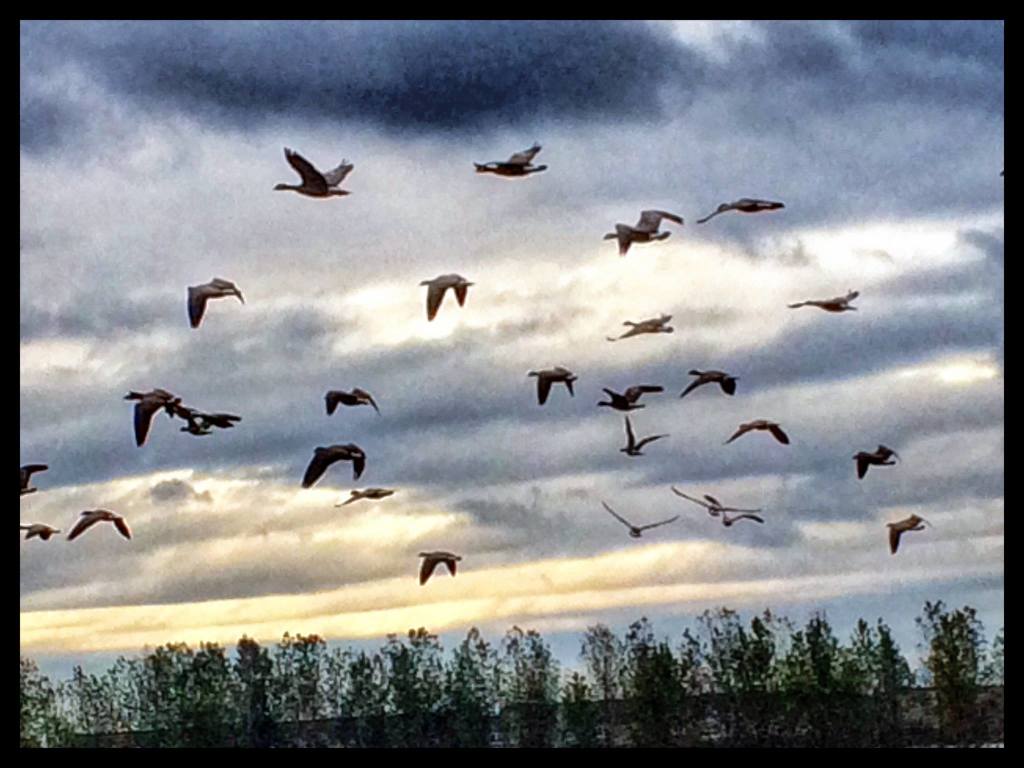 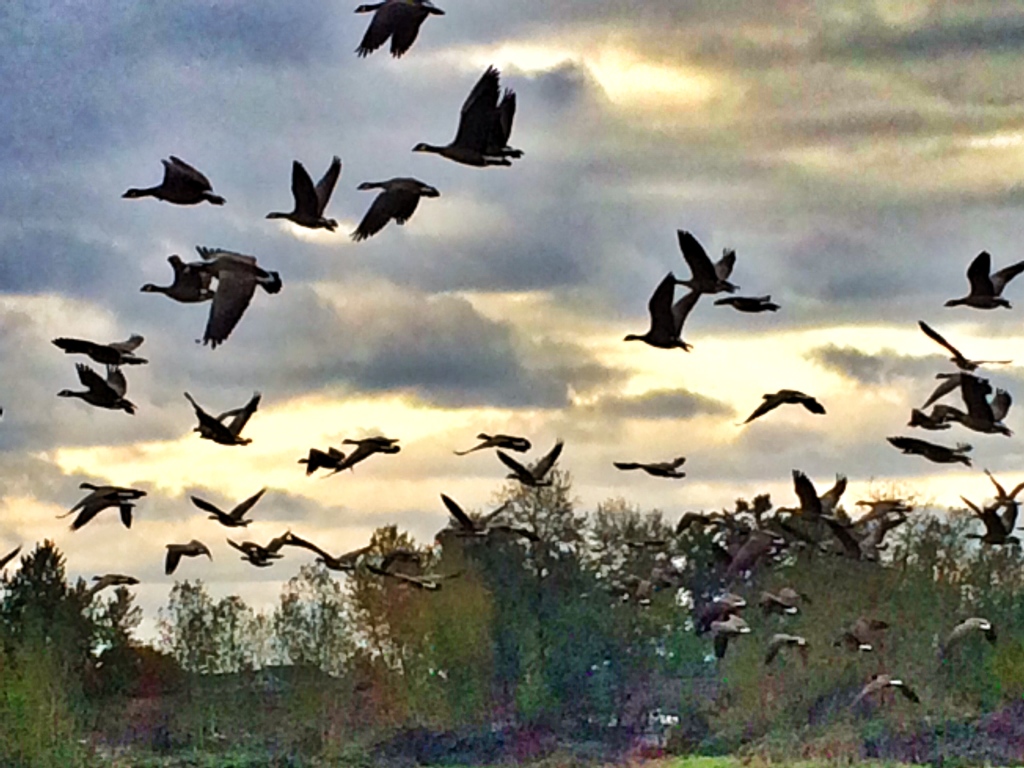 What I could see, along with my impression that the calls were different than those of Canada Geese, convinced me to count them as Cackling Geese. Especially since I was sure I could see a couple of individuals that were quite a bit larger (and, therefore, Canada Geese). But I wanted to be sure.

I walked down to the reconstruction of the old Hudson Bay Company Trading Post and asked the ranger in the cabin by the entrance if he knew about birds. He didn’t, but he called another ranger who did and put him on speaker phone.

I said, “I’m a serious birder out here on business. I didn’t realize I would have time to bird, so I didn’t bring my binoculars. I’m wondering about the flock of geese I saw in the field here. They seem to be very small and I want to know what the chances are that they are Cackling Geese.”

The guy said something like, “They’re Cackling Geese. 98% of the total population winters right here, from Puget Sound down to … (I forget where he said). In all my years of birding here, I think I’ve only seen Canada Geese maybe 10 times.”

I said I thought I’d seen a couple Canadas mixed in with the flock, and he said it was entirely possible, but that the bulk of them were Cackling Geese. I had my bird.

I toured the fort and wandered around the park. Around 2:00 p.m., I headed back to the car. The Cackling Geese were much further off, but the flock was also much larger, with probably 2,000 geese along the airport runway. Here’s just a tiny part of the total flock. 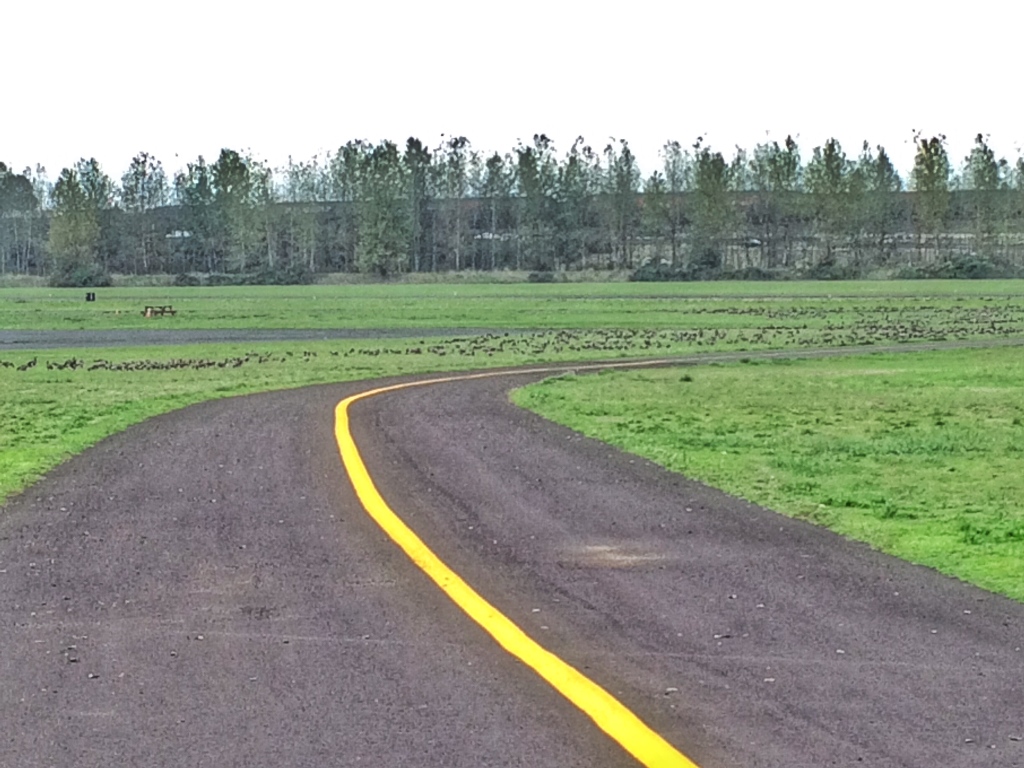