bombycilla (silky-tailed) garrulus (talkative, chattering, but named for its resemblance to the European Jay, whose generic name is garrulus).

I made a couple tries for this bird in northern Illinois/southern Wisconsin years ago, but had no luck. It’s been on my “chase when there’s a chance” list since we’ve been in Colorado, but there have been no chances. Until today.

The Bohemian Waxwing was found yesterday in Littleton, hanging with a flock of Cedar Waxwings. It was in a park called Hudson Gardens, along the Platte River. I arrived around 8:30. It was gray and breezy, and there weren’t a lot of birds around. I wandered until I found the pond where the flock was found yesterday. I noticed about 10 birds in the top of a cottonwood high above my head. They were waxwings. The light was terrible, and the angle was bad, but I sorted through them until I found one that was a little larger, a lot grayer, and had dark under-tail coverts. I could see a patch of white on its wing. I had my bird, and a photo or two that might have been diagnostic if I lightened them up a lot, but I wanted a better view.

I walked around to the other side of the pond where a small group of birders (all with masks on) were standing. The waxwings were gone. I hung around for maybe 10 minutes, then went for a stroll. I soon saw another group of birders looking up into a cottonwood maybe 100 yards from the first group. The Bohemian Waxwing was in the tree. He was obviously larger than the Cedar Waxwings, and he moved around a lot more, chasing insects (?) on short flights. At times he landed near the flock, but other times he was separated from them by 30 feet or so. I heard another birder saying that the Bohemian was picked on by the Cedars, but every time I saw any interaction, the Cedars kept away from the Bohemian. The sun came out while we watched, and I was able to get some decent photos. 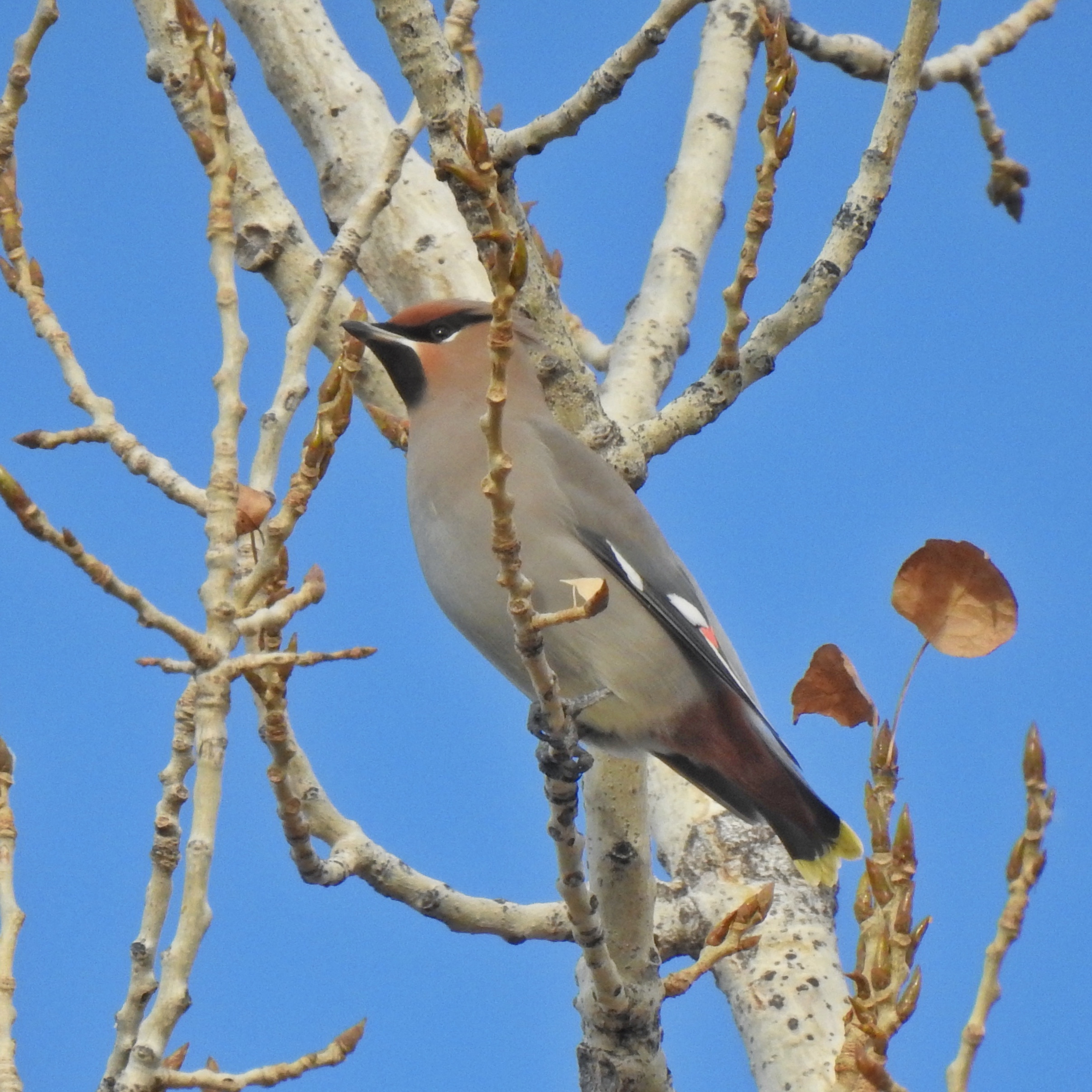 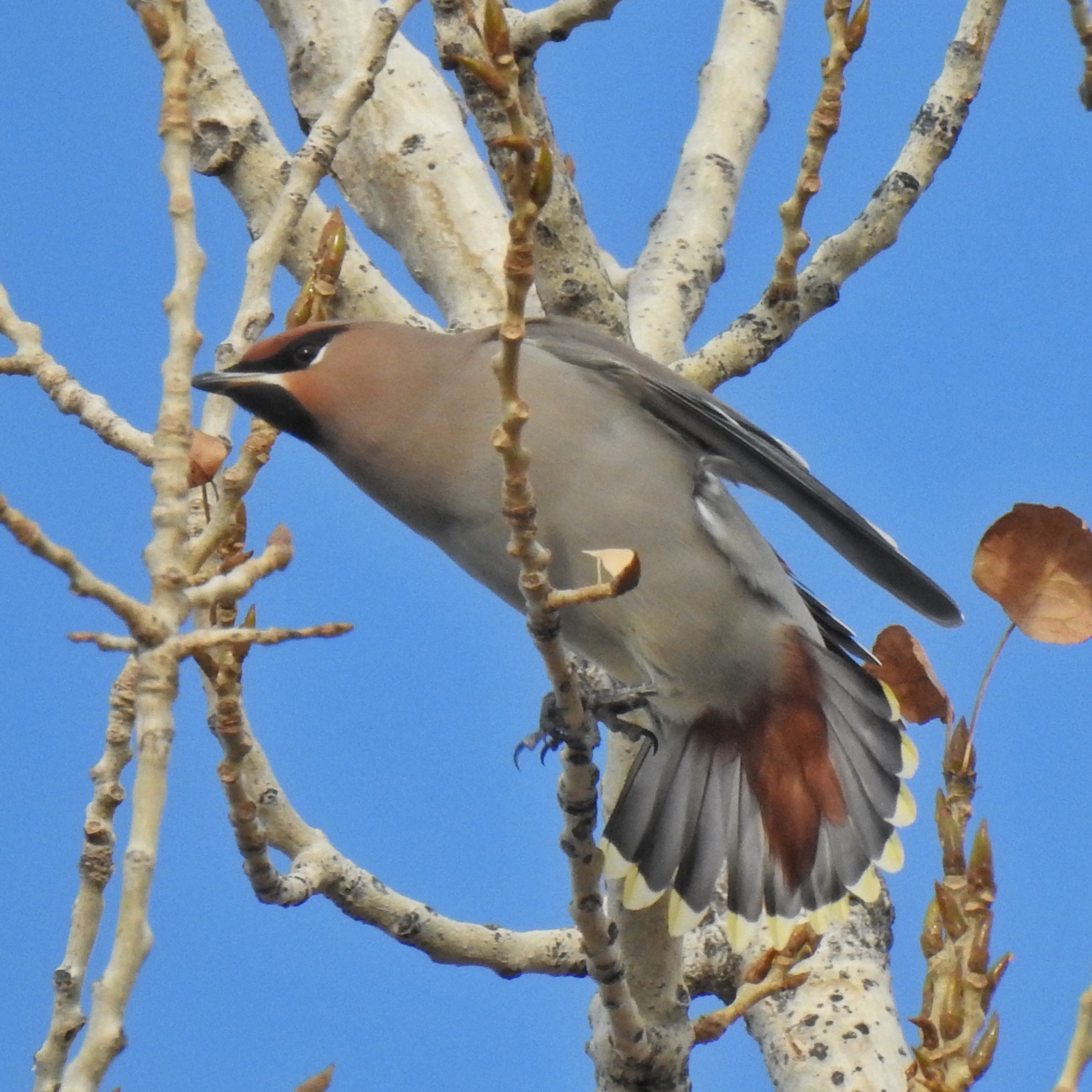 In this shot, a Cedar Waxwing is just above it. You can see the white wing spots, the cinnamon under-tail coverts, the gray chest and belly, and the redder face of the Bohemian. It’s also maybe an inch longer. 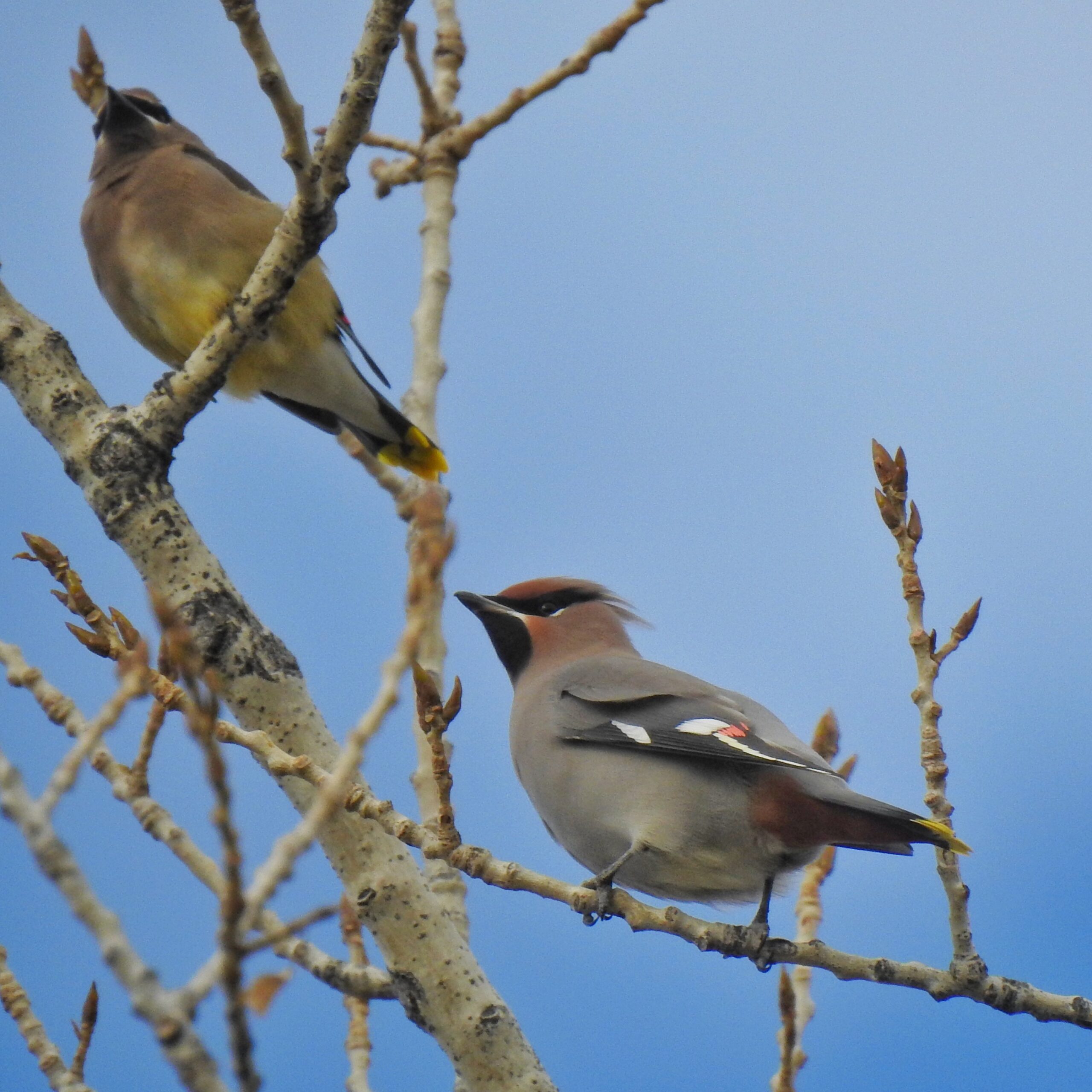 After maybe 15 minutes, the flock took off. I wandered around the gardens to see what else there was to see. When I got back to the cottonwoods where I first saw them, they were back, only this time there were probably 70 Cedar Waxwings. I walked around the pond again to get the light (such as it was) behind me. It was tricky to pick out the Bohemian among the others, but I managed a couple times.

One thing kinda funny happened. Several people in the group were trying to explain to other people in the group exactly where in the tree they saw a bird they thought might have been it. I wasn’t seeing it at the time, but I noticed a steady parade of waxwings flying down to the edge of the water to drink. I just concentrated on them and soon saw the Bohemian land on a log in the water. I called out to everyone and caused a great deal of consternation because it immediately became apparent that the birds they were looking at weren’t it. The Bohemian stayed on the log long enough for others to see it and confirm my i.d., but it didn’t stay long. The flock hung in the trees for another couple minutes and then took off. No doubt they would return, but I’d gotten great views, decent photos, and the light wasn’t getting any better. I headed for home.