What would you get if you crossed Taco Bell, Rain Forest Cafe, and Disneyland? We went to Casa Bonita to find out. It’s in an older neighborhood west of downtown Denver. 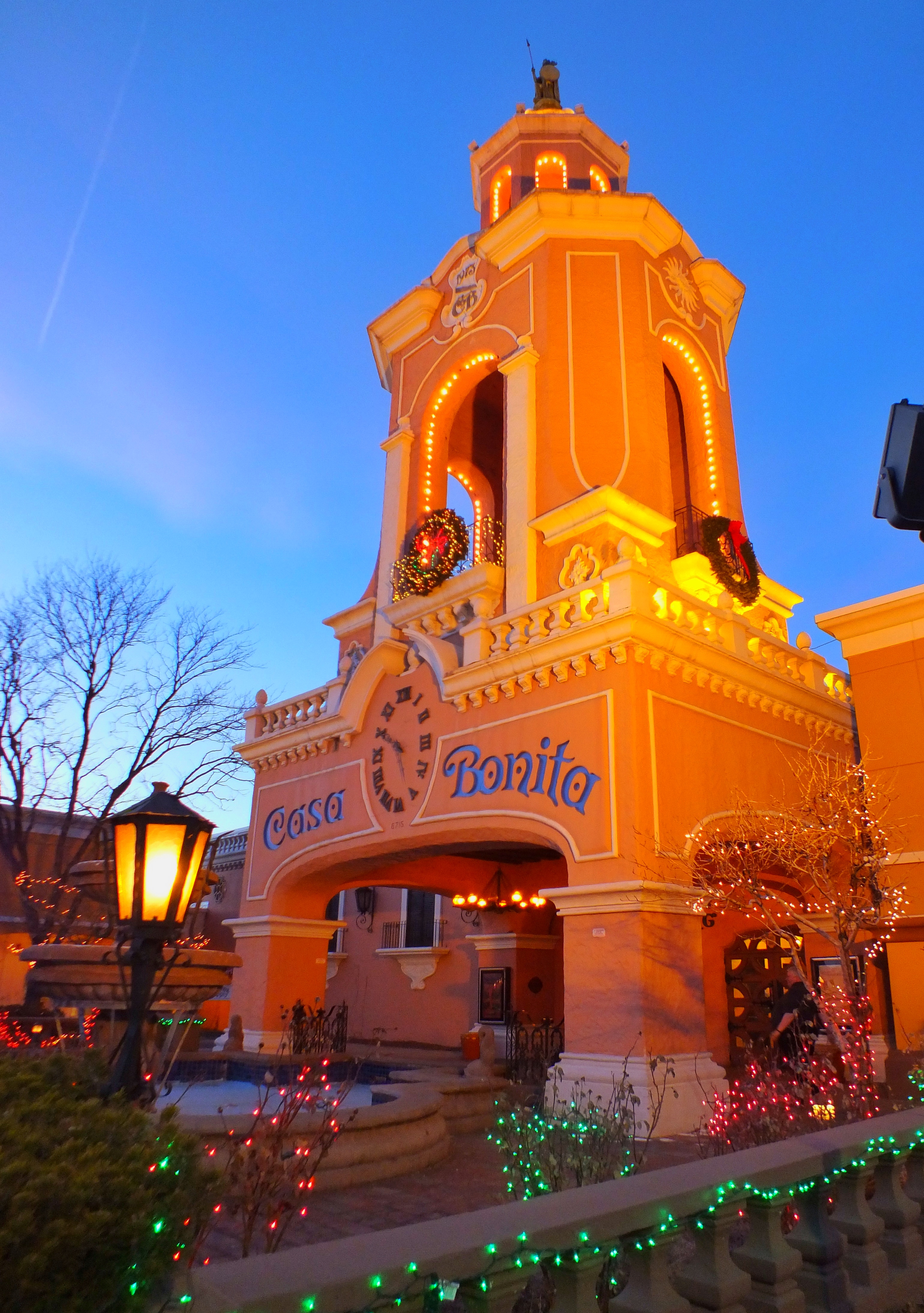 We filed in through a long series of lanes like those that lead to the rides at amusement parks. We were disappointed right at the very start when we found out there would be no indoor cliff diving this evening. 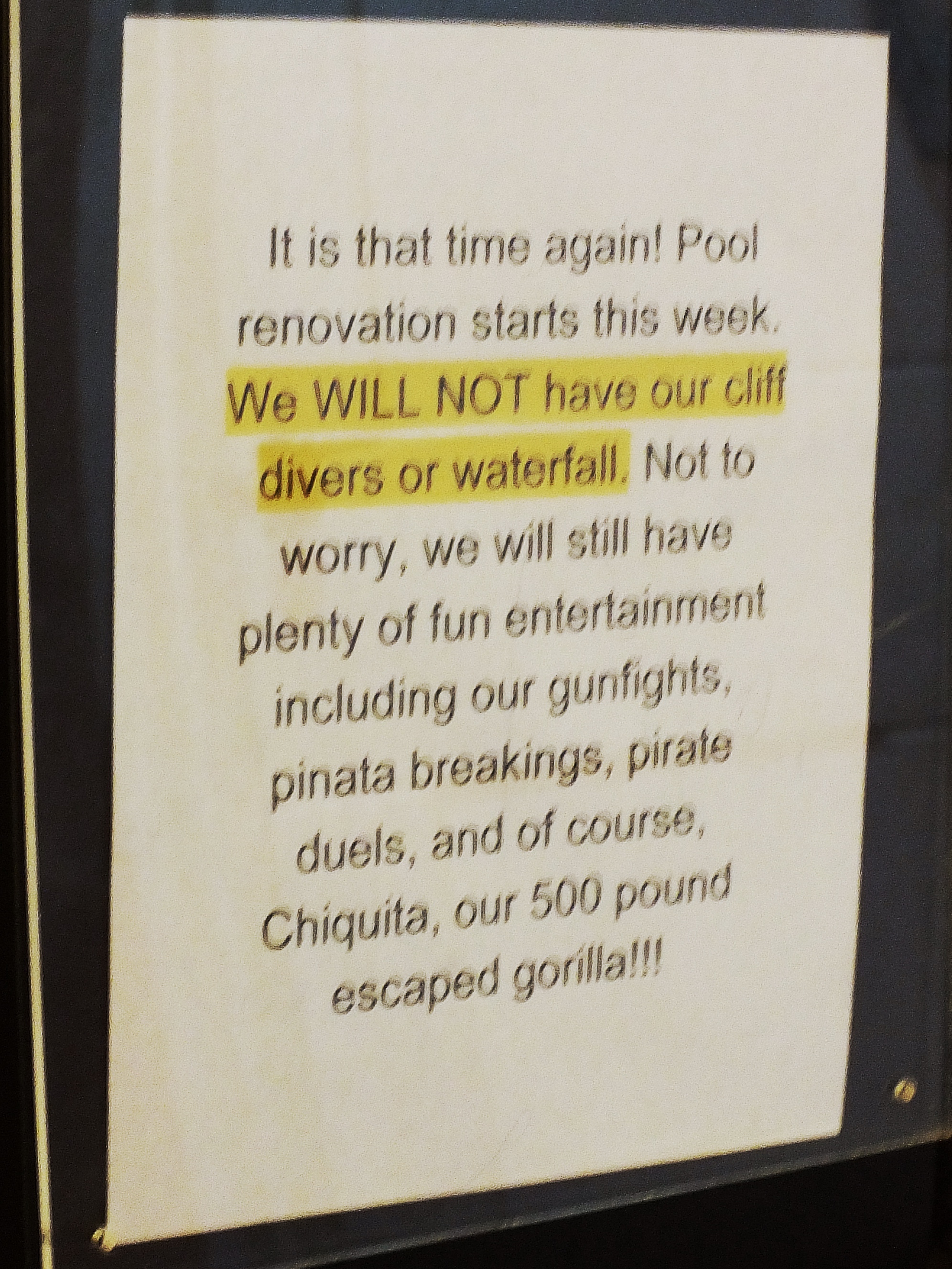 A young woman at a turnstile took our order. And then we filed through several more series of lanes until we ended up in a little room where we waited for our food to get shoved out through little holes in the walls. The plates were too hot to touch. 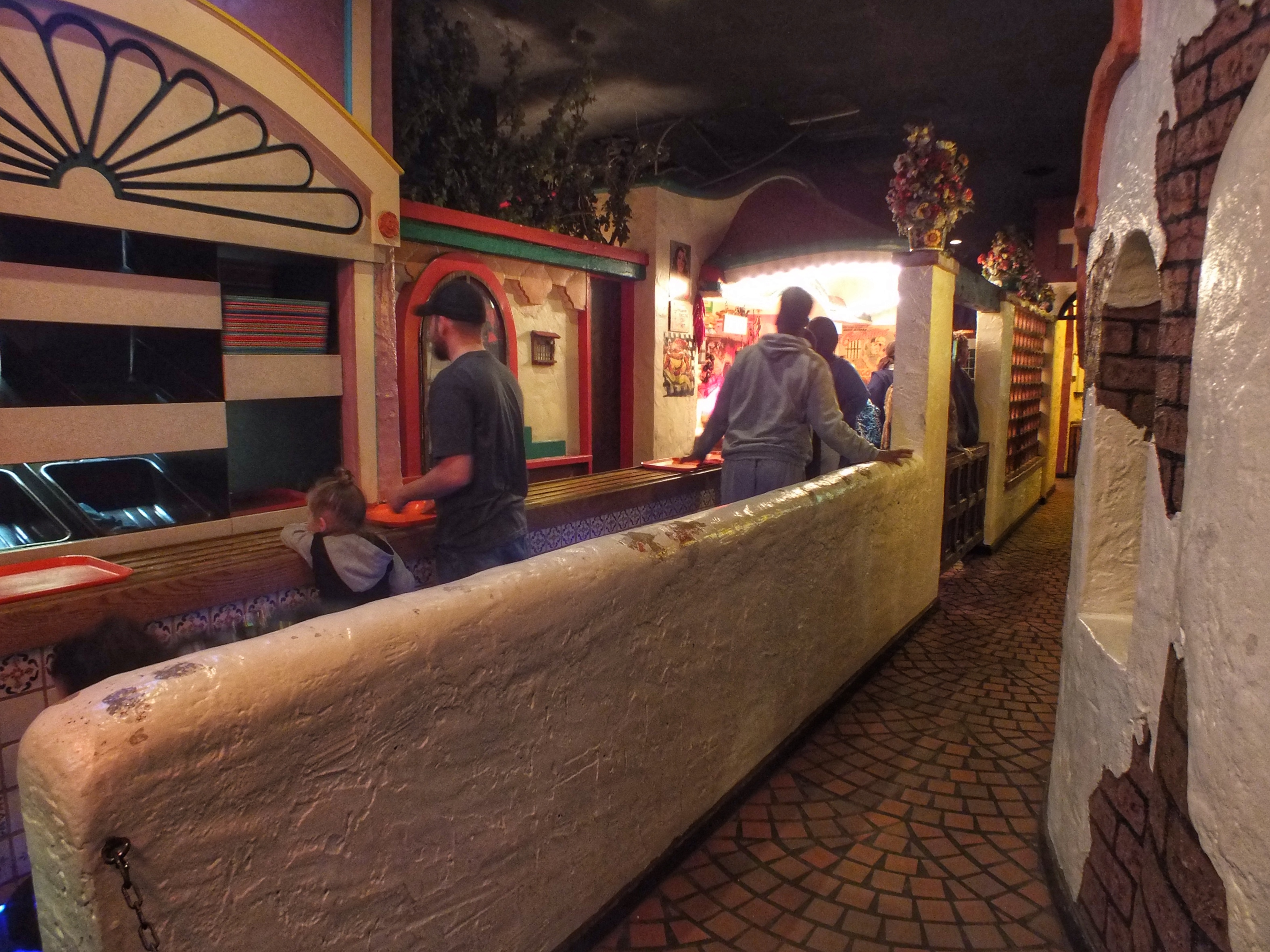 We made our way through yet another maze to the hostess’ desk. 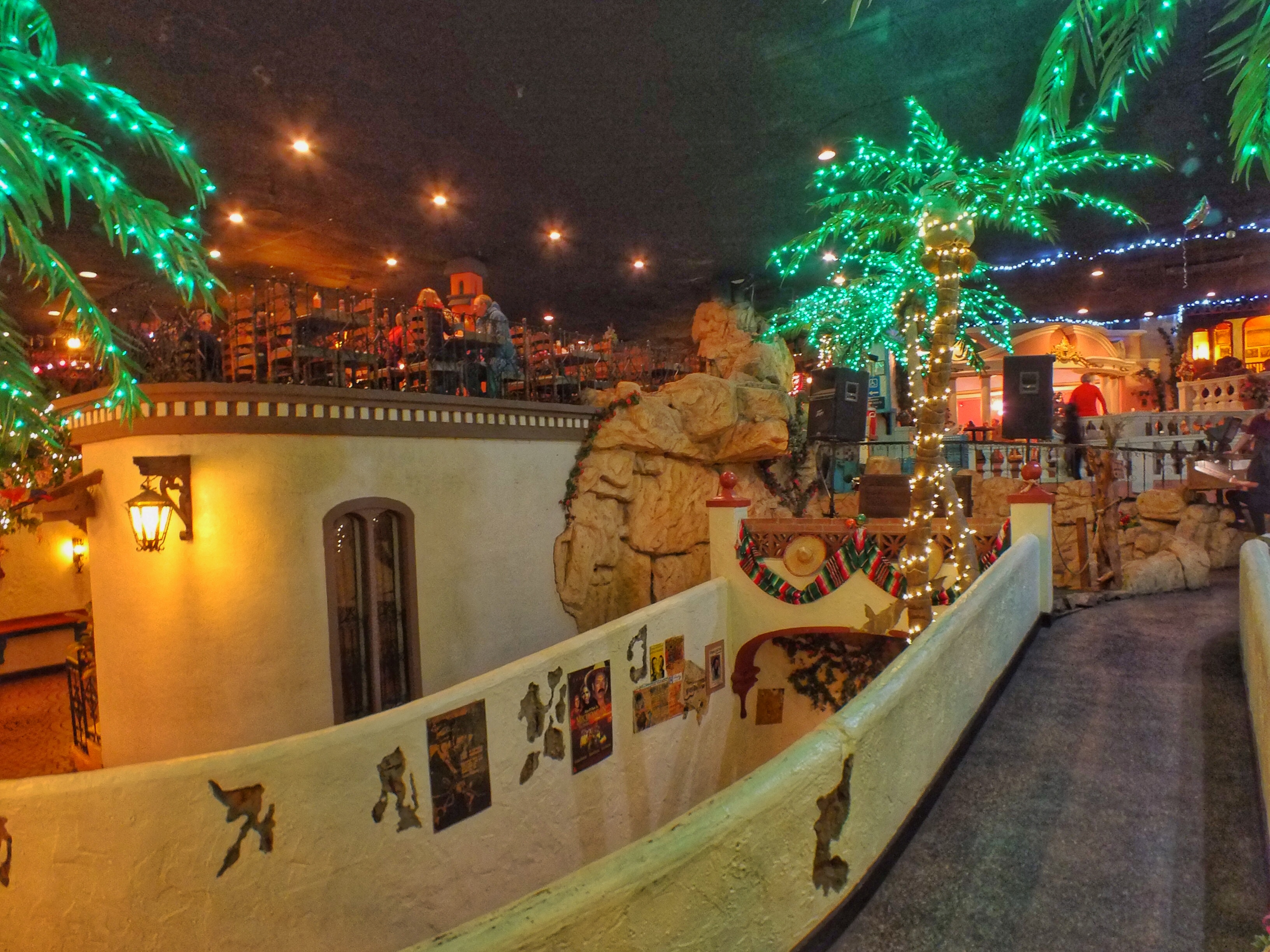 She led us to a table near where the waterfall and cliff divers would be if there had been any. My wife had a nacho salad and I had burritos. The food wasn’t terrible, which was much better than we expected. This was the view from our table.

Chiquita, the world’s least convincing gorilla (who didn’t weigh anywhere near 500 lbs) was led by our table on a chain. It wasn’t long after this that he escaped somehow and made a mad dash around the restaurant. 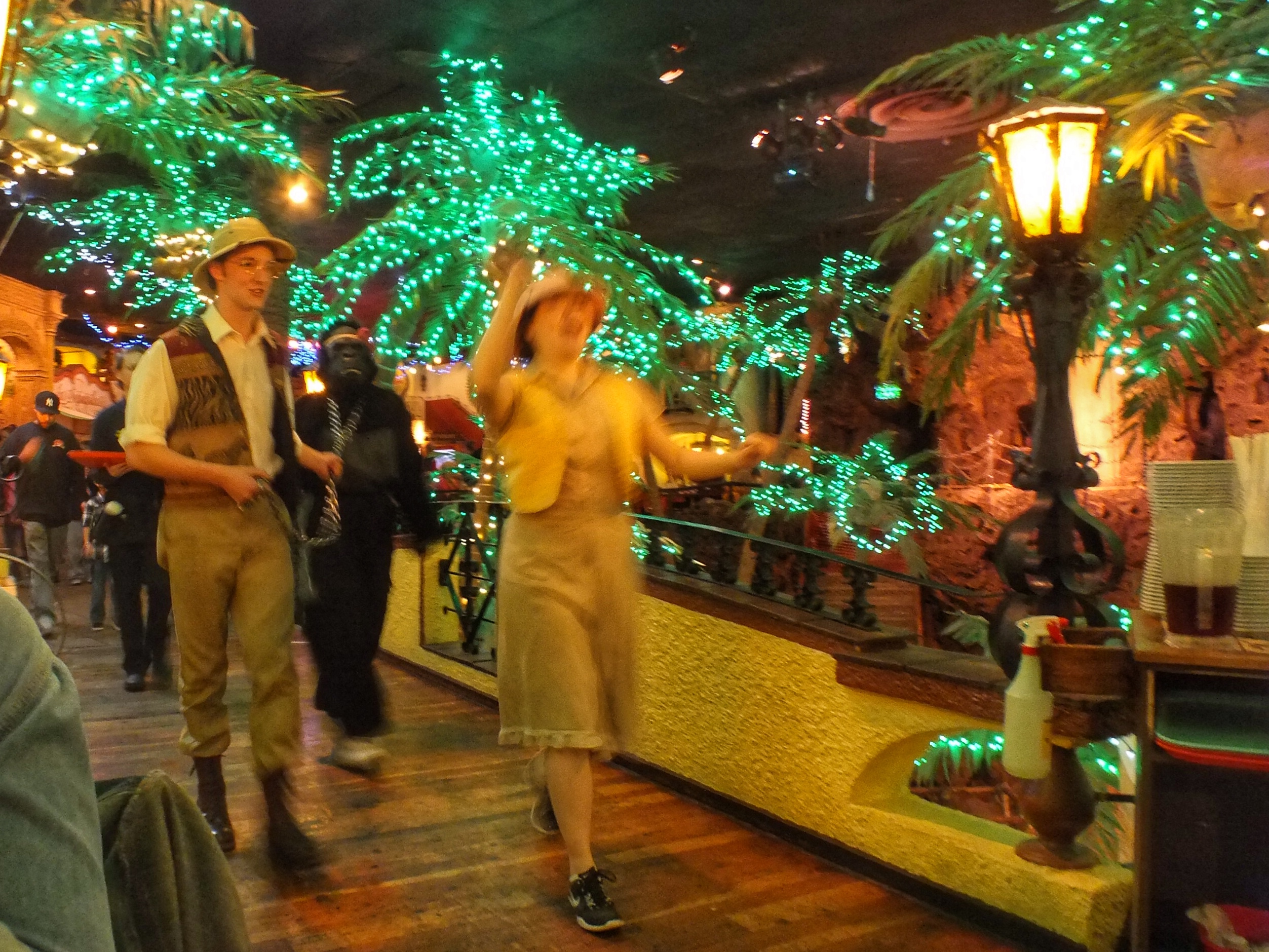 That’s all the excitement that took place near where we sat, so when I finished eating, I went in search of more. I discovered a group of kids breaking a piñata and another group watching a puppet show. And I discovered Black Bart’s Hideout (although I feel that he could hide much more successfully if he took down the signs). 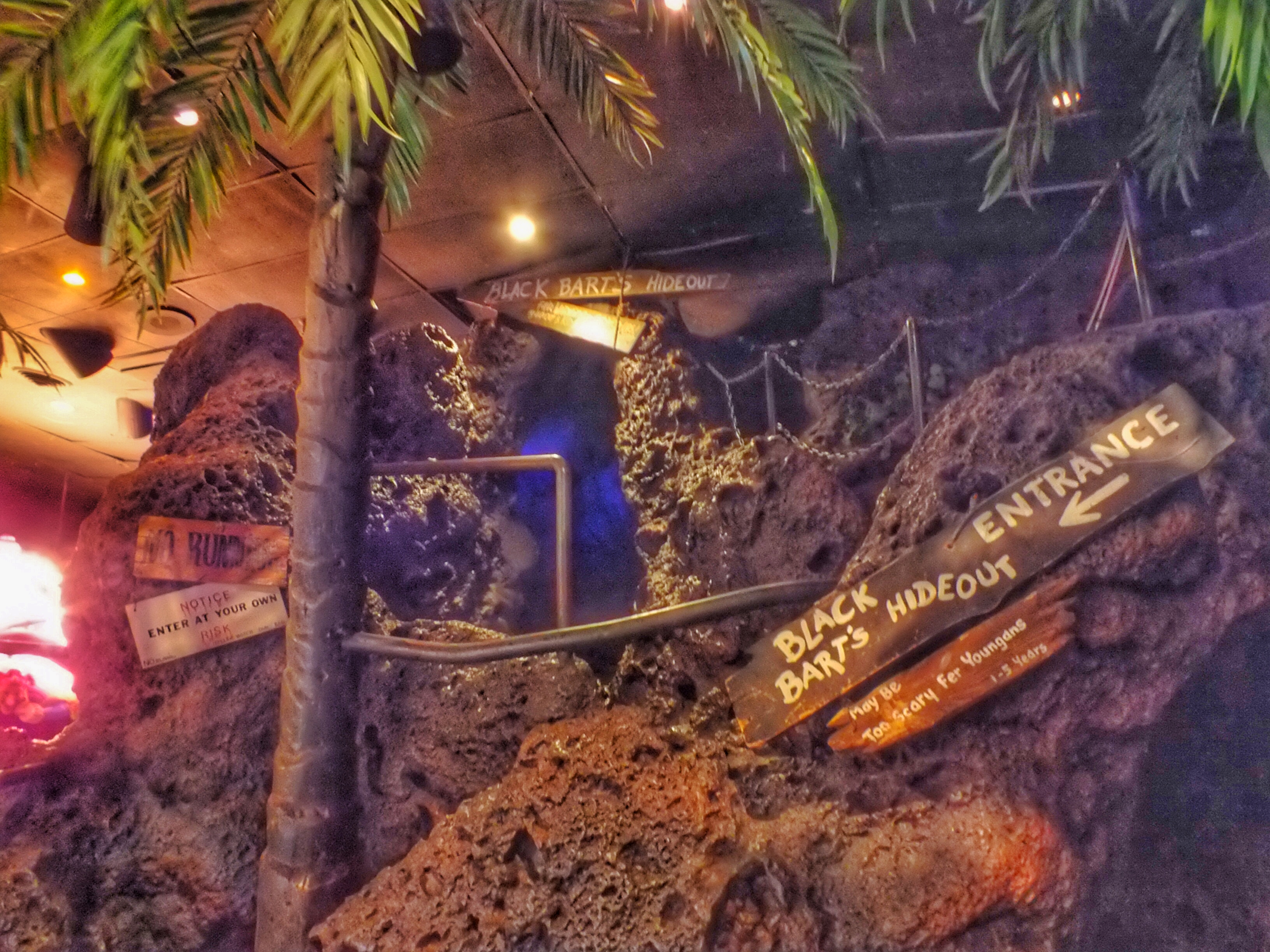 I was too frightened to enter on my own, so when my wife finished eating, we returned.

We crept through a narrow, low, winding corridor that led past a pirate skeleton, a gorilla in a cage, and various other odd creatures, including a giant snake. 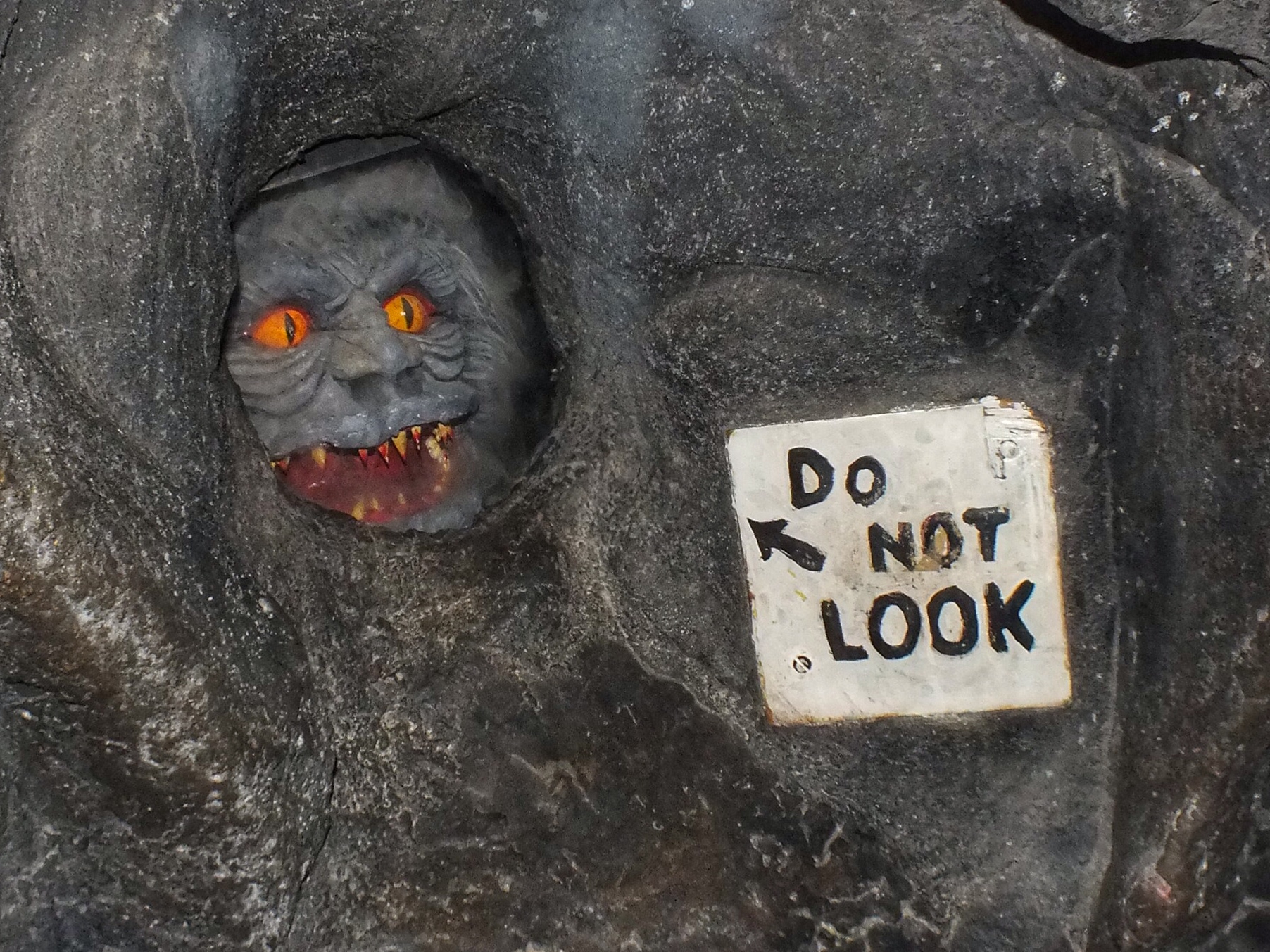 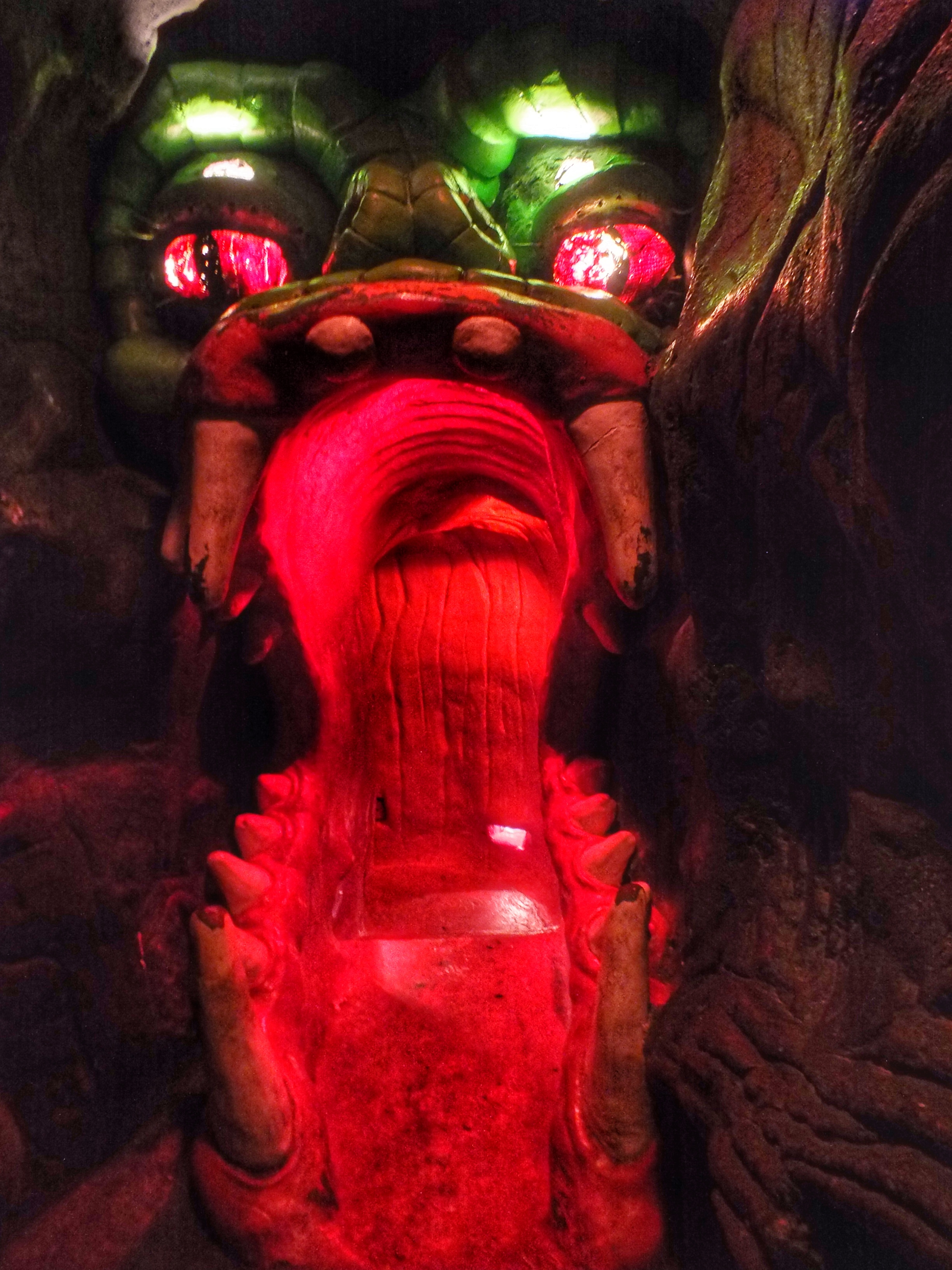 There was also a “buttomless” pit. 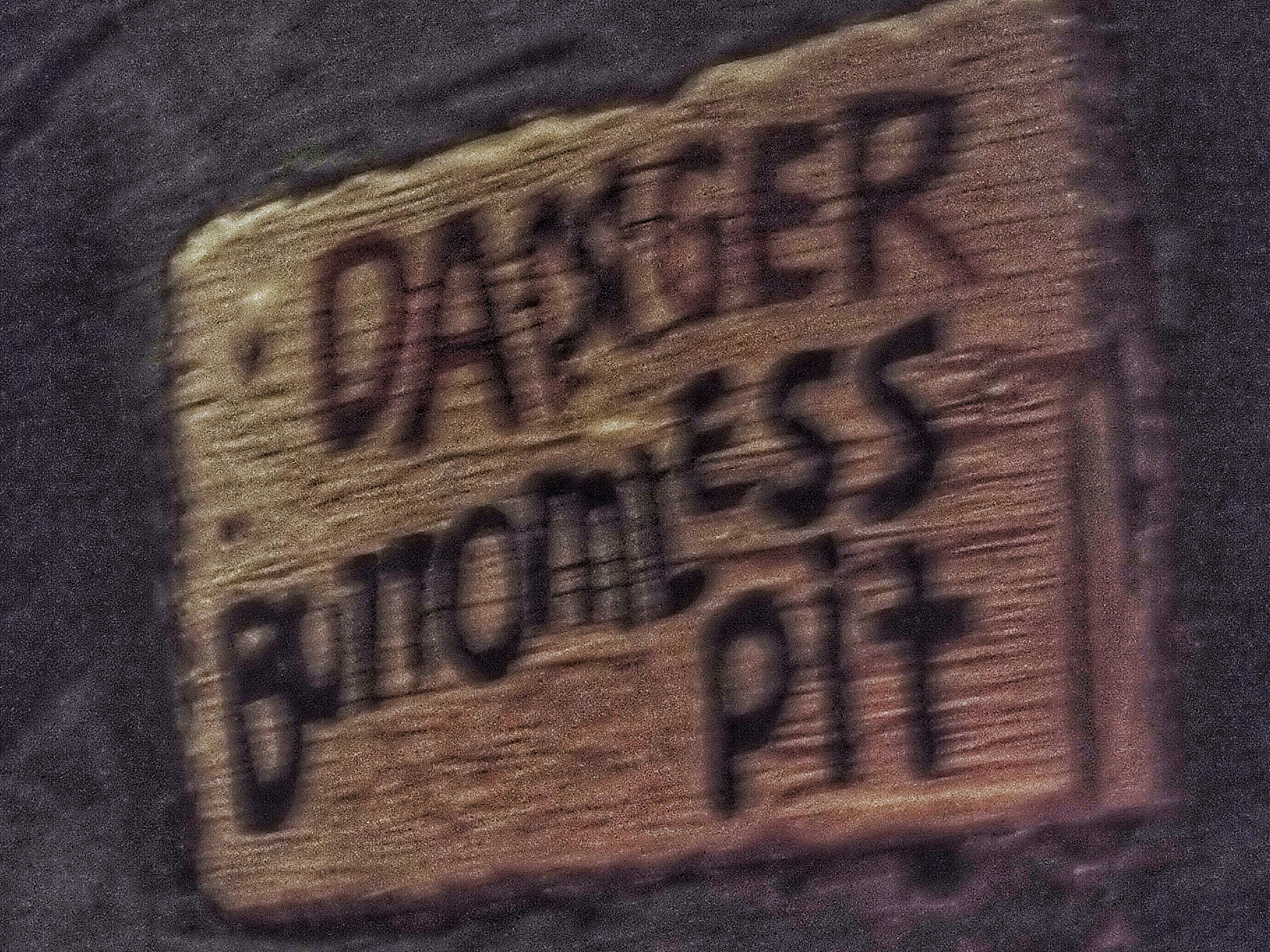 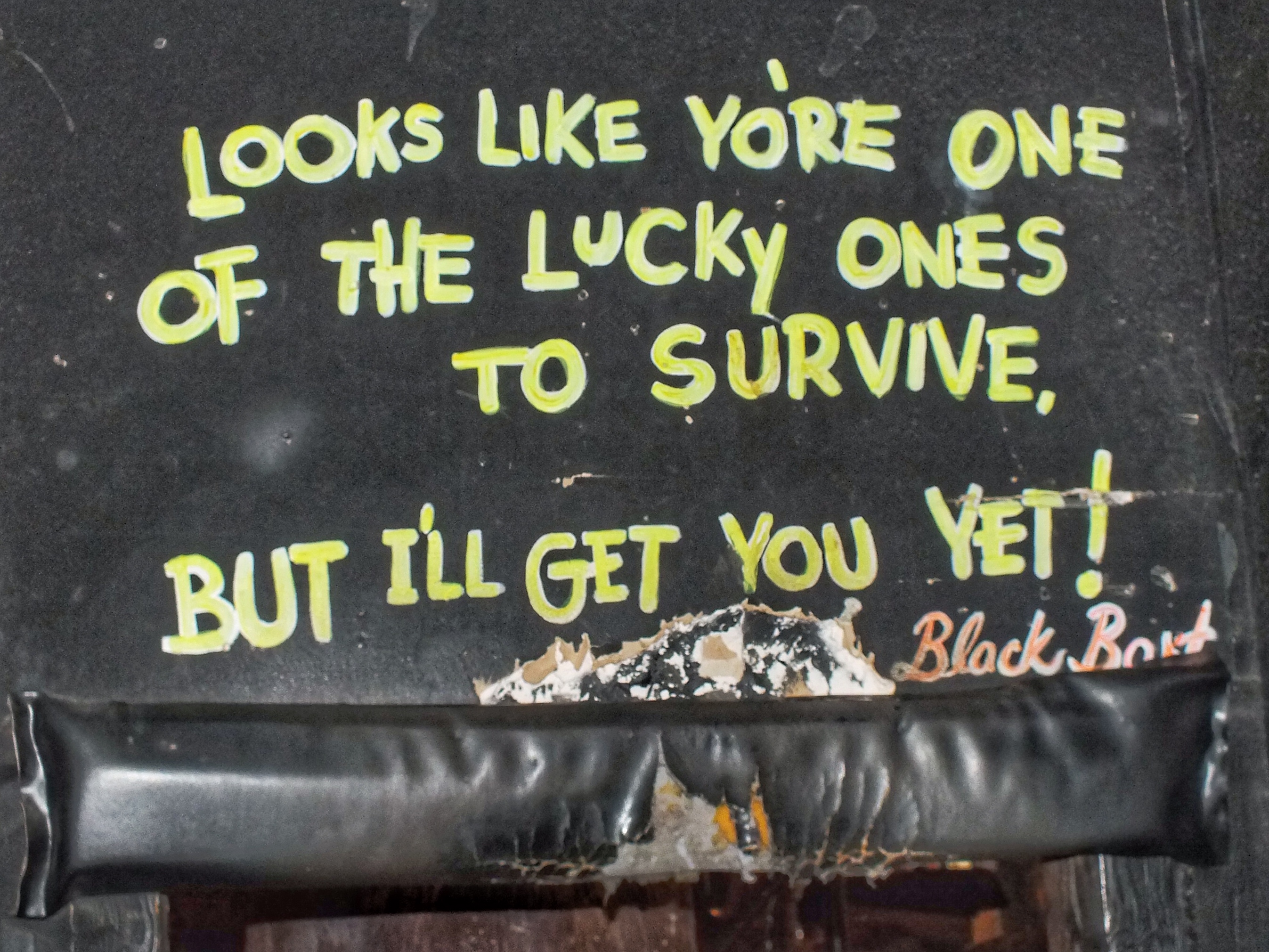 We made a quick pass through the rest of the place, passing by a Billy Bass fish tank, a Batmobile, and a truckload of arcade games. What pirates, Billy Bass, the Batmobile, and a gorilla have to do with Mexico was never explained.

It was all every bit as silly as it sounds, but the food filled us up and we didn’t get food poisoning. Buttom line, we can say we’ve been there. And we never have to go again. Unless we want to see the cliff divers.