We were in Denver, the weather was lousy and forecasted to get worse. We spent the afternoon at the aquarium. 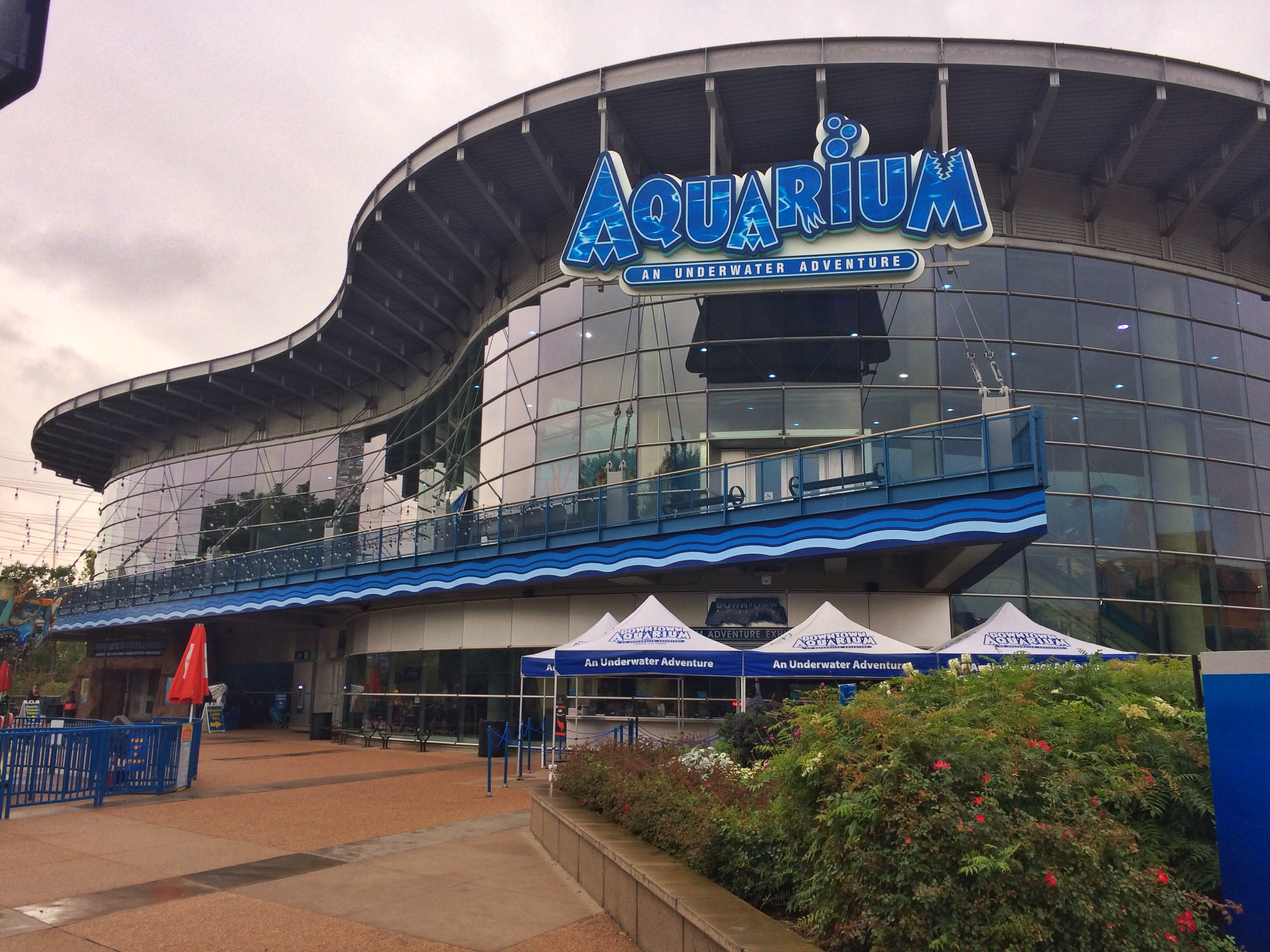 We were hungry when we arrived, so we went to the restaurant first. We had to wait 45 minutes for a table, I guess because they were short of staff. They certainly weren’t short on empty tables. This was the view from ours. 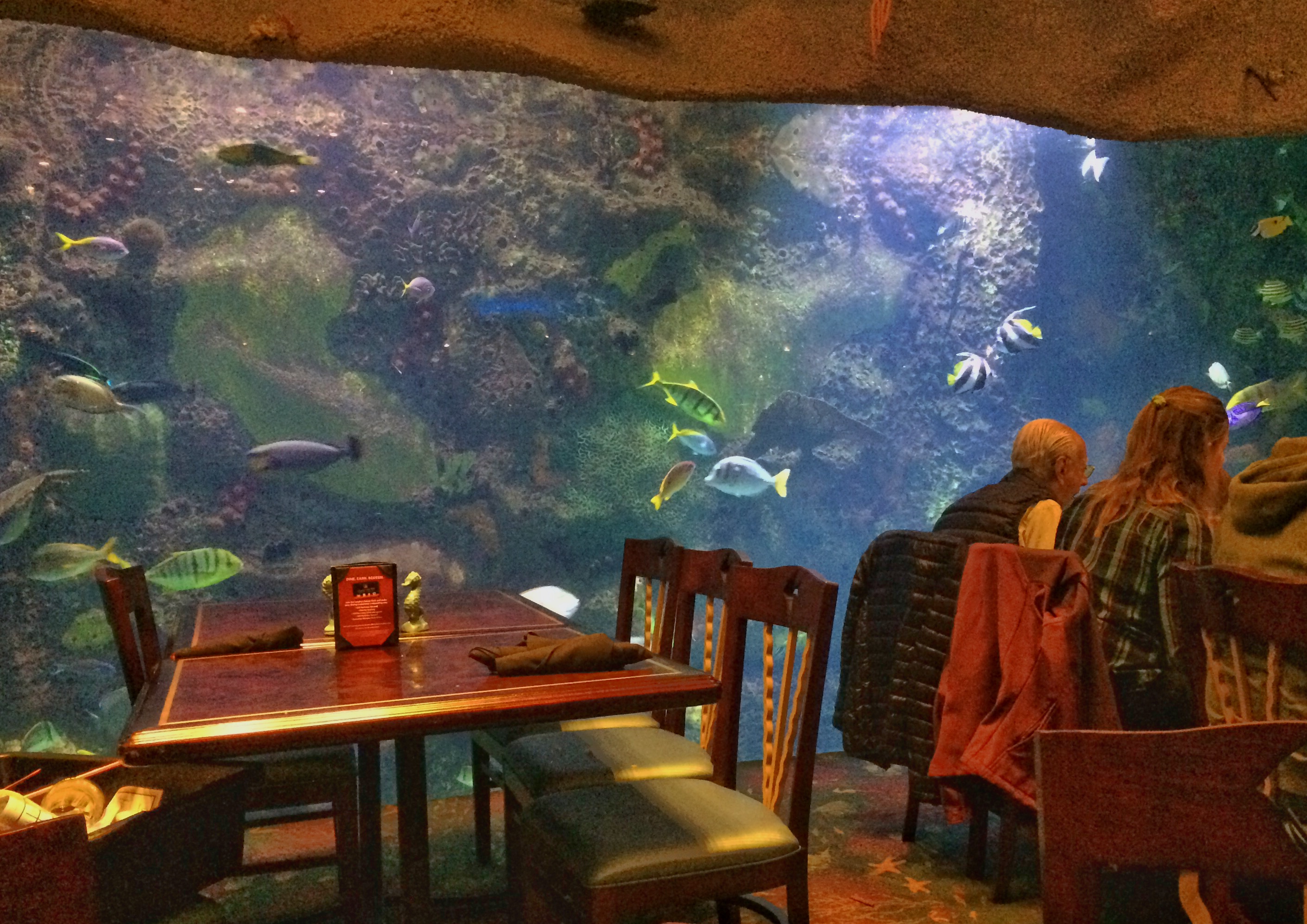 We waited a long time for our server to show up, and then a long time before our food arrived. This gave us plenty of time to watch the fish in the large tank nearby. My wife ordered fried chicken. I had a noodle dish with shrimp and chicken. Both of us thought the chicken was tasteless, but the rest of the food was good—except for the pile of vegetables on top of mine that just didn’t go with anything else. 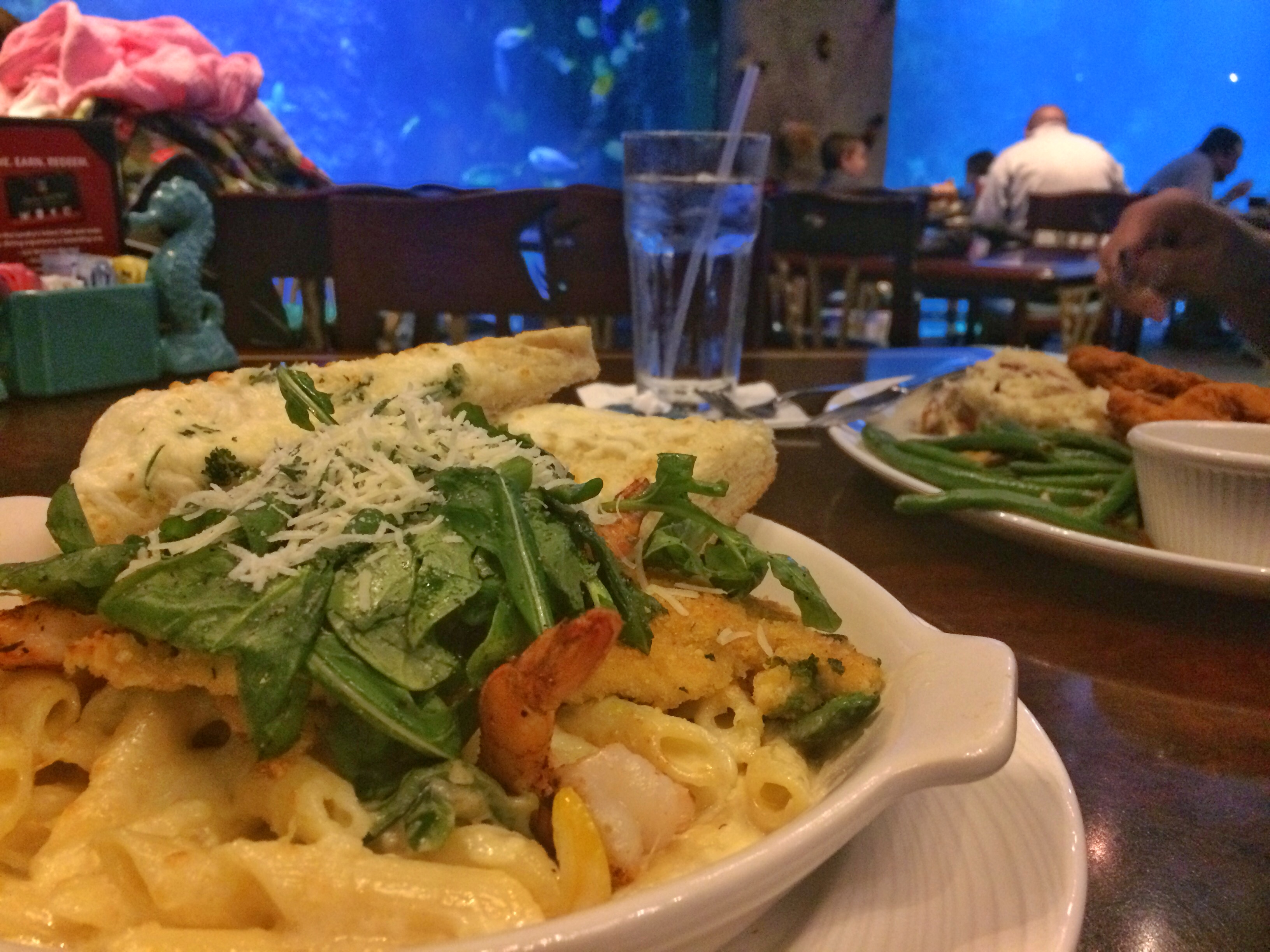 Halfway through our meal, a mermaid showed up in the next tank down. Her show lasted maybe five minutes. She would rest at the surface for a minute or so, then dive down, circle, and swim back up. I haven’t tried swimming with my legs stuck together in a rubber tail, so I can’t really complain. Although if I tried, it would give the diners something to remember. 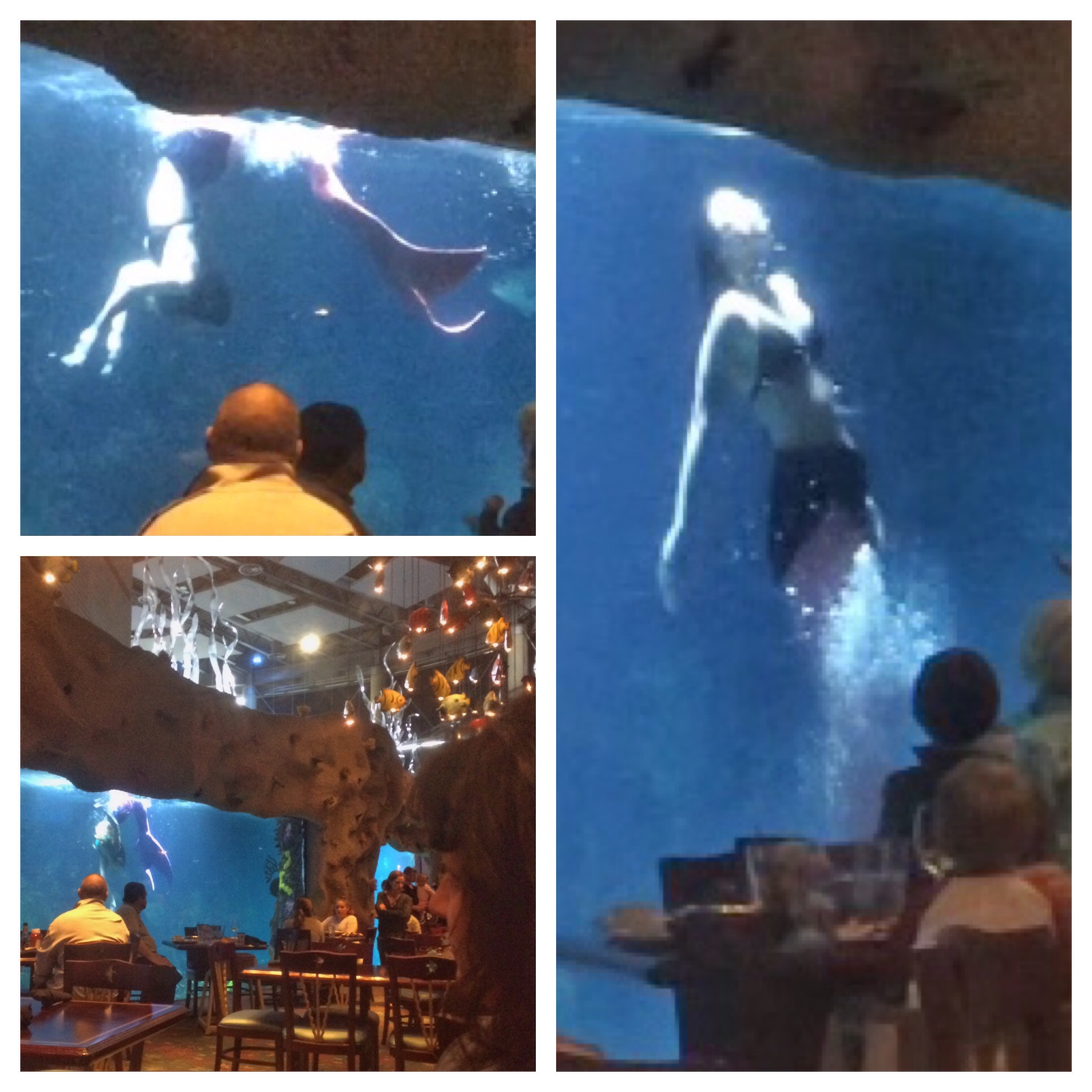 The meal was expensive. Unless you have a strong desire to watch mermaids while you eat, I wouldn’t recommend going. If you do, avoid the chicken.

The aquarium was crowded. All the exhibits were along a single aisle that wound around the building and got pretty narrow in places. We had to make a serious commitment to block other people if we wanted to see any one thing for more than a minute or so. We took our time as best we could and saw everything—patiently waiting and enduring loud OPKs. 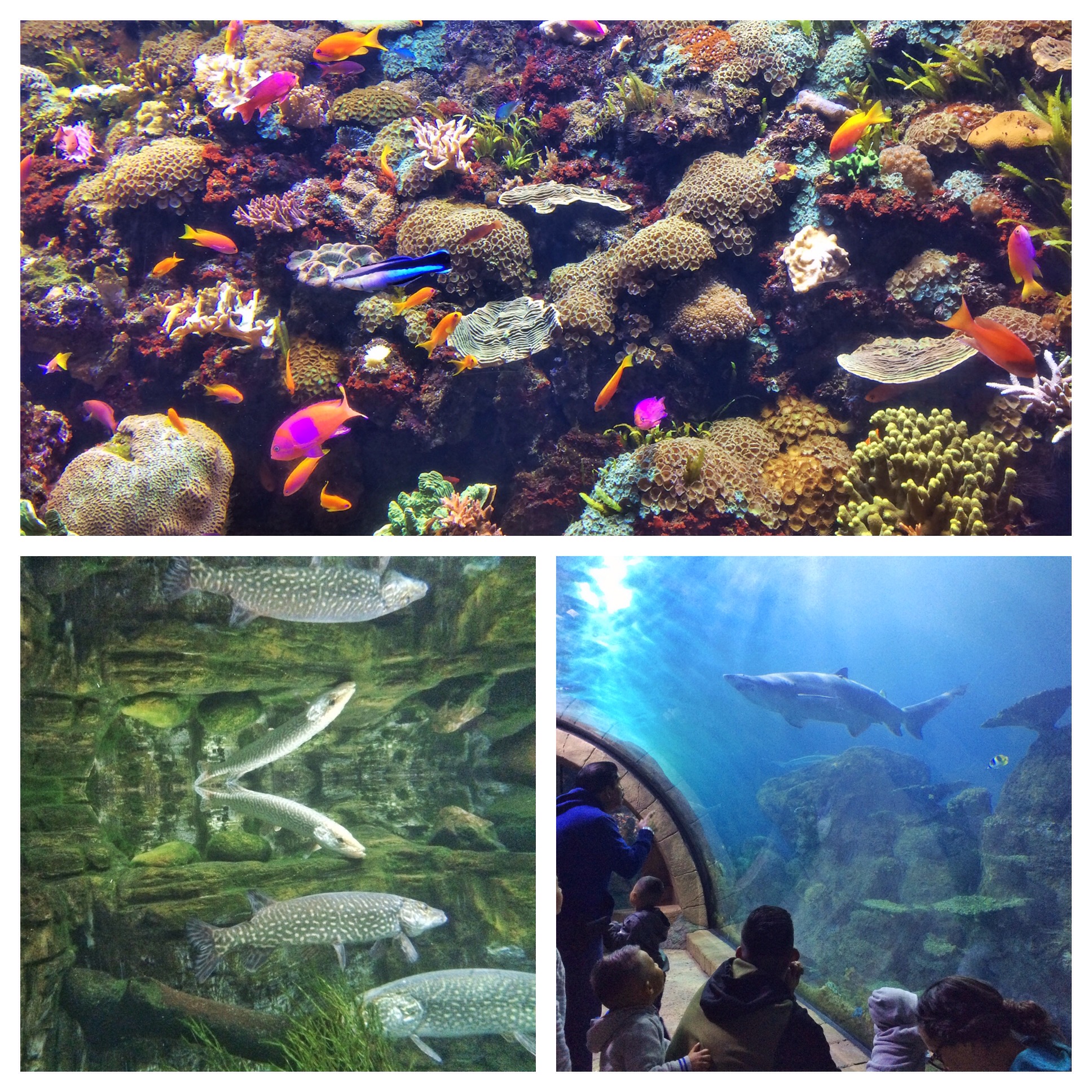 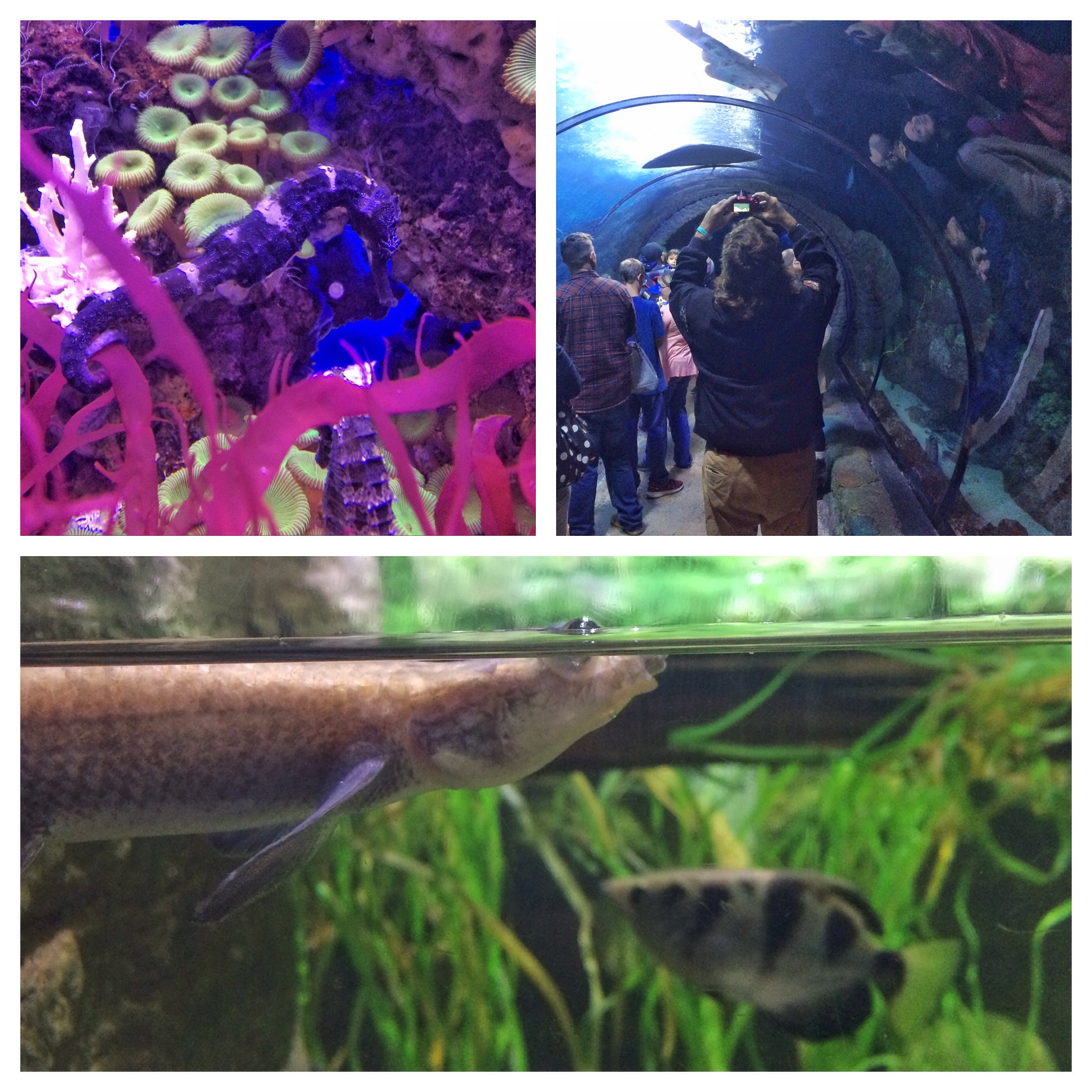 We had a very good time. We saw several interesting and beautiful creatures. We were allowed to touch swimming rays. They’re slimy. The Sumatran Tiger looked smaller than the Bengal Tigers I usually see in zoos, and it had longer facial hair. When we finished, we walked outside to the 4D Theater. It was raining, and we had to stand under an awning in the cold, damp wind until the previous showing was over. We’d paid to see a movie on the gannets, sharks, dolphins, and whales that feed off the sardine schools in the Indian Ocean off South Africa. When the doors opened and we headed inside, we found out that the show we wanted alternated with one about Legos. We didn’t want to stand outside for another 15 minutes, so we asked the attendant if we could see both. Since there were so few people there for the Lego show, she said we could. She gave us pink glasses as we entered.

The Lego movie was stupid. In addition, to even begin to understand it, you had to have seen the Lego movie. We hadn’t. The 4D effect consisted of five things — seats that shook, blasts of air on our necks, bubbles that floated up from the front of the theater, a sharp jab in the back, and sprits of water (that I didn’t feel, but my wife said she did.) These rotated throughout the show with little or no connection to anything that was happening on screen. The blasts of air were frequent and particularly annoying.

The predator movie was more interesting, but the effects seemed to rotate through in the same order and frequency, again with little connection to anything on screen. The blasts of air on my  neck while a dolphin swam through the ocean were hard to figure out.

It was teeming rain when we left, and we were drenched by the time we got to the car. It was a long, stressful drive home on a crowded Interstate with near-blinding rain at times.

As for the aquarium, we both enjoyed it. If we’re ever with someone who wants to see it, we’d go back, although we probably won’t visit by ourselves. But we’ll skip the 4D theater and the restaurant.