One of the items on my list of 30 Things to Do in Chicagoland was “See a movie at a drive-in theater.” The other night, we went to the McHenry Outdoor Theater and 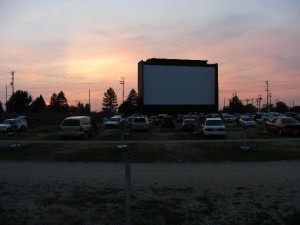 Drive-In in McHenry. The first movie, WALL.E, began at 9:15. We got there about half an hour early. We paid $7 each. I wandered around and took some photos while my wife read in the car. The place was crowded, and about 50 kids were running around the grassy area beneath the screen. I bought $8.50-worth of food at the concession stand — two ice cream bars and a pretzel. They had the metal speakers we could hang on our car windows, but we chose the radio option once the movie began. Oldies from the 1950’s were blasting over the speakers. The place had a real nostalgic feel to it.

When the windows were open, we were eaten alive by mosquitoes. When the windows were closed, it was muggy and hot. The screen, especially early in the movie, wasn’t well lit and we had a hard time seeing what was going on. Other than that, it was great. We compromised with the heat/mosquito situation by leaving the windows open a crack and slapping frequently. 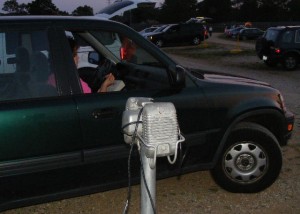 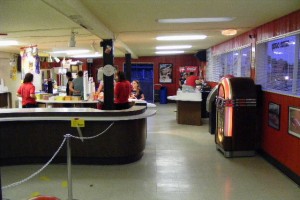 The movie was cute (what we could see of it), and the short before the movie was very funny. We enjoyed the experience — we haven’t been in a drive-in in over 20 years — but it’s not one we’ll be in a hurry to repeat. Which is too bad, because when we bought our tickets, I mentioned to the guy in the booth that it was our first visit. He welcomed me and gave me a free pass for two adults and two kids on any Monday to Thursday night between now and September. 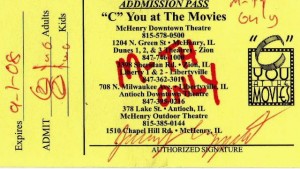 The second movie was Prince Caspian, which we’ve already seen, so we didn’t stay. As we were pulling out at 11:10, the announcer said the second movie would start in 25 minutes. That would be 11:35. It’s a two hour and 24 minute movie, which means it would let out at 1:59 am.