It’s OK If You Burn Yourself

Once in a while I find myself in a situation so unexpected and unusual that part of my brain keeps nagging, “Is this really happening?” That was the case early in the afternoon this past April 18. I was standing on the sidewalk in front of a 90-year-old Tudor-style building in downtown Lake Bluff, Illinois with friend who is also a photographer. We were introducing ourselves to John des Rosiers, owner and chef of Inovasi Restaurant.  He invited us inside. As my friend took hundreds of photographs, John spent the next two hours giving me my own personal cooking lesson. 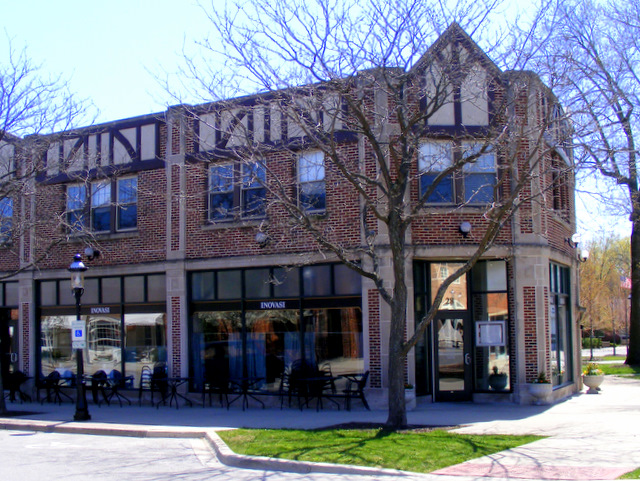 It all started back in March when I wrote a post about my philosophy of cooking. Another friend has a cooking blog on which she writes about preparing and eating stuff that I’ve never eaten and probably wouldn’t recognize as food. She read my post and saw an opportunity to help me out  and make fun of me at the same time. Her idea was that I’d learn how to cook a meal from a prominent chef and then prepare it on my own for my wife and mom on Mother’s Day. It sounded like fun.

I’m not exactly sure how she got the chef to agree to spend the time with me, but here he was welcoming me to his restaurant. Inovasi has been open for about nine months and has been listed in Chicago Magazine as one of the best new restaurants in the area. 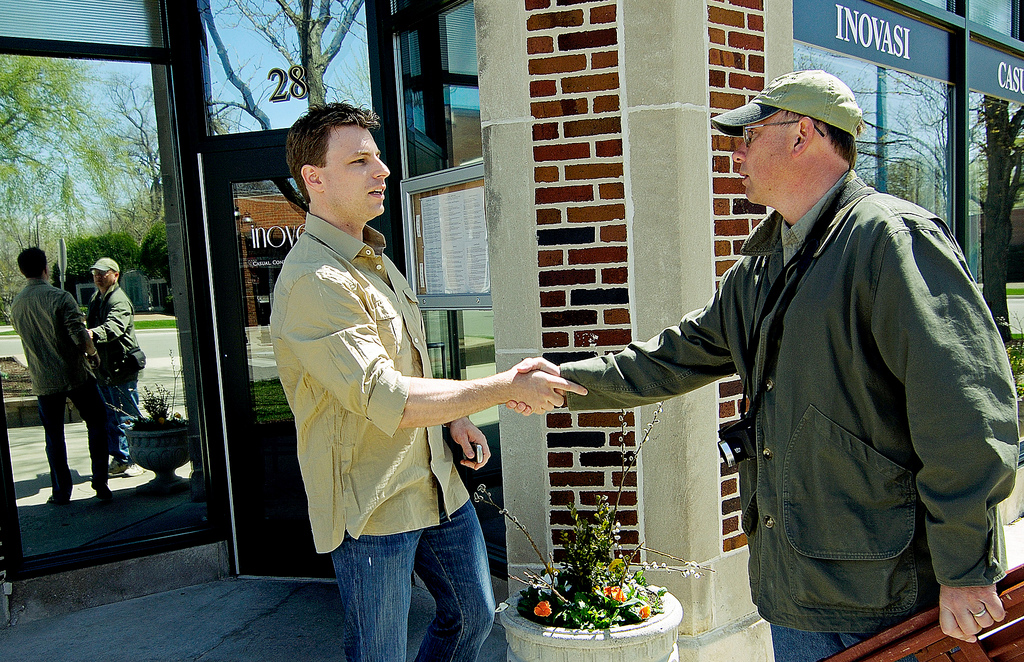 John and I sat in the dining room for 10 minutes or so, getting to know each other and talking about cooking. I was a little nervous at first, not knowing what to expect but even more not knowing what was expected of me.  As John expounded on his philosophy of cooking, he used the word “important” several times. I told him that I’d always assumed that the importance of cooking was so that I’d have something to eat. He explained that his joy came from preparing something for other people that would please their senses and create emotional gratification. I’ve always been better able to accomplish that by not cooking … But we would see.

I asked if there was a taste equivalent of color blindness or tone deafness. John said there was (he called it “palate deafness”), and that a lot of people think they have it but that very few actually do.

I was introduced to Jamie, a hostess at Inovasi who sat in on the lesson and took notes so I wouldn’t have to remember everything I heard, and another Jaime who manages the restaurant’s marketing and publicity. We then walked into the kitchen.

When I find myself in situations like this, my method as a writer is to sit back and let events unfold and allow the story to write itself. I fully expected that I’d look like an idiot and mess up royally and come away with a story about how this was the furthest out of my element I’d been since my wife and I took ballroom dancing lessons. Fortunately (or unfortunately, depending on your perspective) that never happened. John was patient and generous, willing to answer any and all questions. Throughout, he operated on the principle that I could cook and that, once I realized that fact, I would want to. Within minutes I was feeling relaxed and comfortable and having a great time. There were no calamities, no major blunders, no moments of extreme embarrassment. I’m sorry I can’t give you an opportunity to laugh at me, but it just didn’t pan out that way. Here’s what took place:

John’s kitchen wasn’t at all what I expected. The part of it that I saw was a long, narrow aisle with a stove on one side and a counter across from it. It must get very crowded and chaotic in there on busy nights. Above the counter is a window that looks out on the dining area. 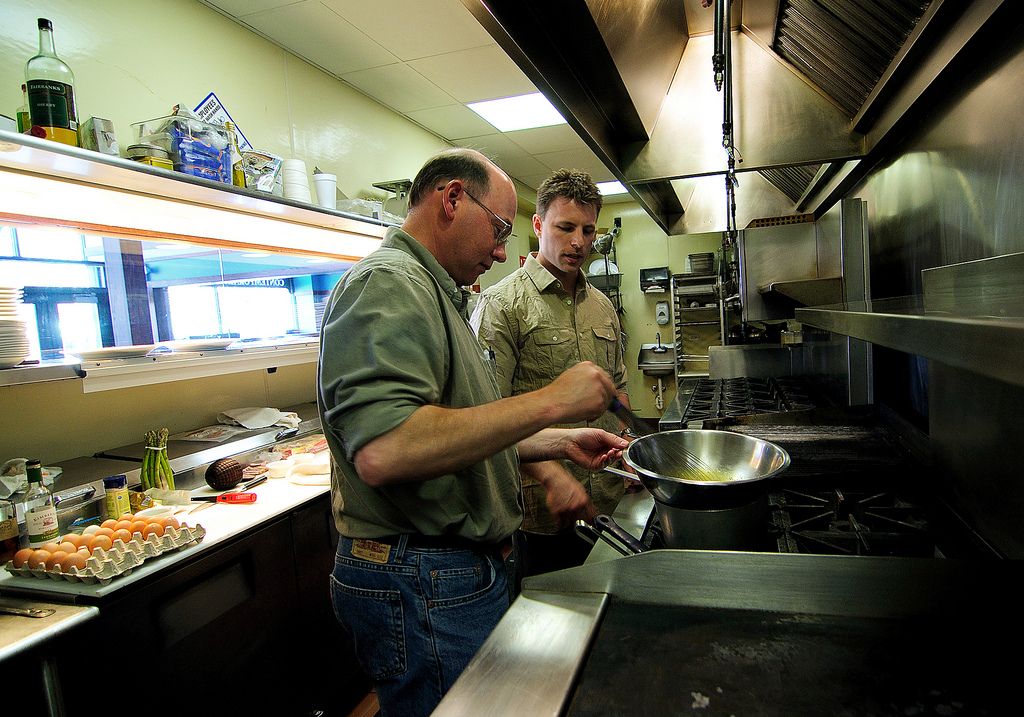 Everything that we would need for our meal was set out on the counter, an arrangement known as mise en place, or literally “putting in place.” A chef uses this to run through the food preparation in his head before he starts, to make sure he isn’t missing anything and so he has everything handy during time-sensitive moments. I spotted several items I was unfamiliar with, but I took a deep breath and prepared myself for anything.

Our meal would be eggs Benedict with sides of asparagus and pineapple. John said he’d chosen these foods because they were “brunchy,” appropriate for spring, and would be challenging to cook.

He went down the counter item by item and explained each thing to me.

I’m not going to proceed step by step through the process or give you a recipe because, coming from me, that would just be weird, so you’ll have to settle for an overview.

We began with the sauce. We half filled a small pan with ingredients, boiled them for a few minutes, then threw everything away except a puddle of brown liquid on the bottom. We then separated the yolks of nine eggs. With this, as with every other step, John did it a time or two, then had me take over. One of the few things I do know how to cook is fried eggs, so I know how to break an egg. I’ve never separated the yolk from the white, but it didn’t present much of a challenge. When I took over the job of cutting the tarragon into small pieces, John told me I had the natural ability to be a good cook. When I laughed, he explained that he was serious. From the first, the bits I cut were uniform in size and indistinguishable from the ones he’d cut. I was skeptical, but he assured me that many people are unable to do that or even to recognize when they aren’t doing it. I’m sure any ability I showed was due to John’s skill as a chef and teacher and not to any latent cooking skill I possess. 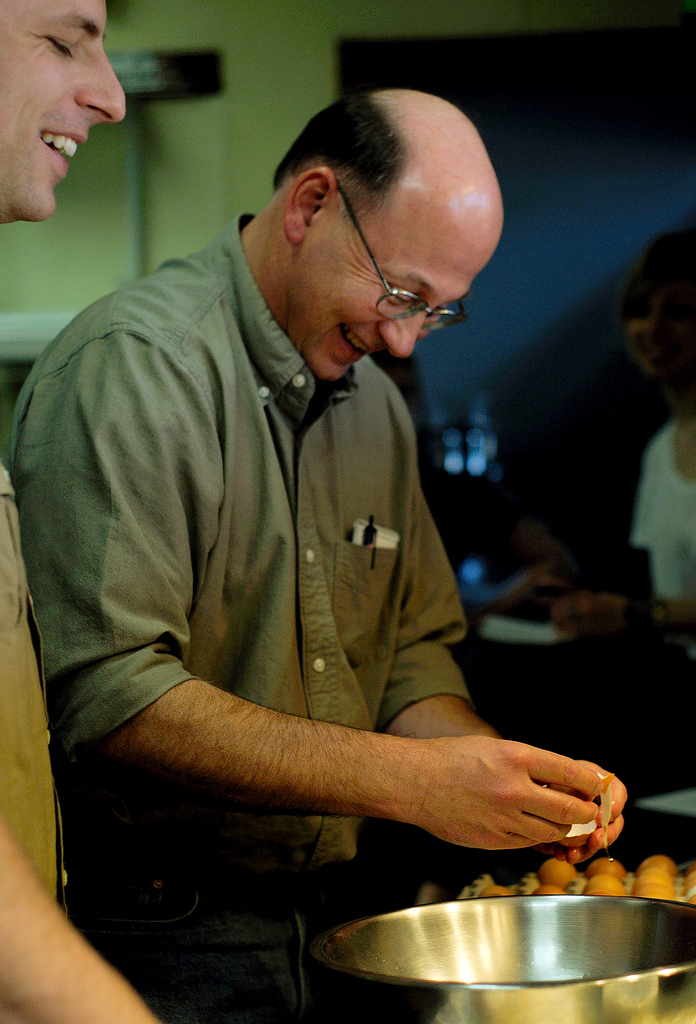 We mixed everything in a metal bowl and placed it over a pot of boiling water on the stove. I whisked it. And whisked it. And whisked it. I was pretty sure my arm was about to fall off. I kept shifting my hold on the whisk handle and finally settled on an odd, palm-up, fingers-through-the-bars-of-the-whisk grip that I could sustain for more than a few minutes. From time to time, John poured in butter or water as the eggs cooked. John said this was the trickiest part of the meal. Mess this up, and the sauce would separate and be ruined. On Mother’s Day, this will be the step most likely to result in my ordering a pizza.

Next, John showed me how to snap asparagus so it will exactly break where the tender part of the stalk meets the woody part. He cut off a small piece of each and had me taste them. I could readily tell the difference in texture, but they both still tasted like asparagus.

Next we whipped up the salad. I sliced the pineapple and, again, the chef commented on how uniform my pieces were. I’m guessing he was looking for something, anything, on which to compliment me, and this was the only thing he could find. I smiled to myself and didn’t let it go to my head. The lime was squeezed over the pineapple which was then mixed with small pieces of the poblano pepper to create a Mexican-style dish. John said he’d made up the recipe in his head that morning while walking through the produce section of the store. 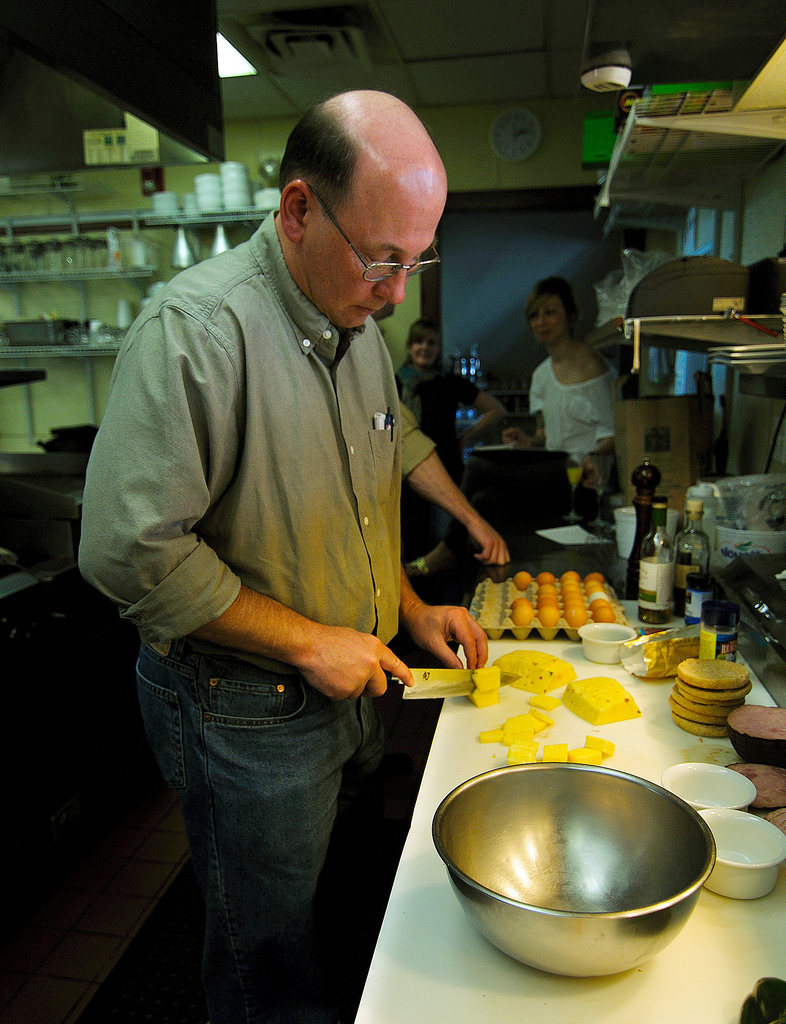 The last major step was poaching six eggs. John demonstrated how to dump the raw egg into gently-swirling, simmering water, then watched as I tried. The trick is to get the dish with the raw egg very close to the surface of the hot water, and I was reluctant to reach down into the hot pot and get close to the water. That’s when John said, “It’s OK if you burn yourself.”  OK for him, maybe — I find that severe pain generally lessens my enjoyment of an activity. I took the risk. After a few eggs, John even left the room, and I managed to poach one unsupervised. 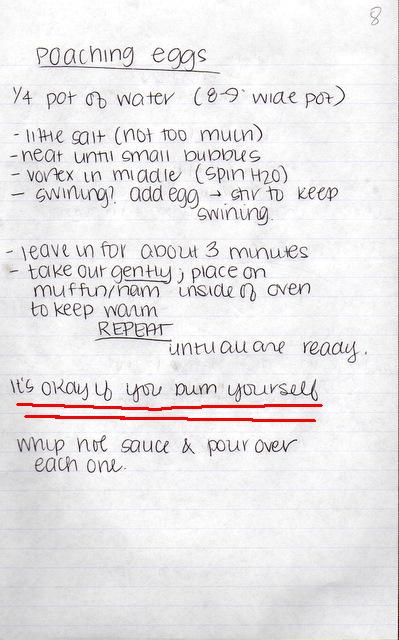 My friend, who had been zipping around for two hours taking photos from every angle, snapped a few last shots of the finished food and then the six of us (the photographer’s wife came by just in time to eat), sat down to enjoy a mid-afternoon meal. 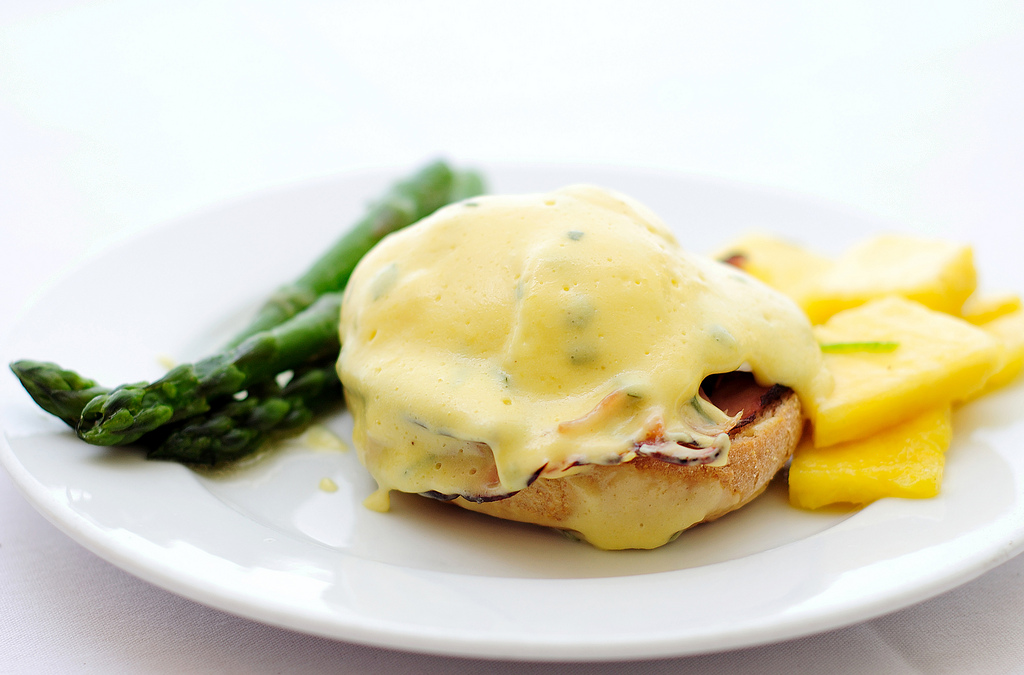 The eggs Benedict were awesome. I don’t recall ever having them before. The pineapple salad was also very good. After we ate, John told me that the lesson had gone much better than he’d expected.

In many of the photographs, I look very serious and somber. But that’s not how I was feeling. I was having an amazing time. John and his staff were friendly, patient and generous. I was given some cookware, some ingredients, and a sizable check so that “you have no excuse for not tackling the meal on Mother’s Day.” John told me I could contact him at any time with cooking questions and even gave me the phone number of his mother’s house so I could call him on Mother’s Day if I had any problem.

There is no way that I, on my own, could have approached the chef at any restaurant on the  planet and said, “Hey, I’m a total moron when it comes to cooking. Would you sacrifice an afternoon to give me a free lesson,” and have him or her agree to do it. And yet, that’s exactly what happened here. The blogger came up with the idea and made the arrangements, and John agreed to do it, and I thank them both. It was an experience unlike any I’ve had before. 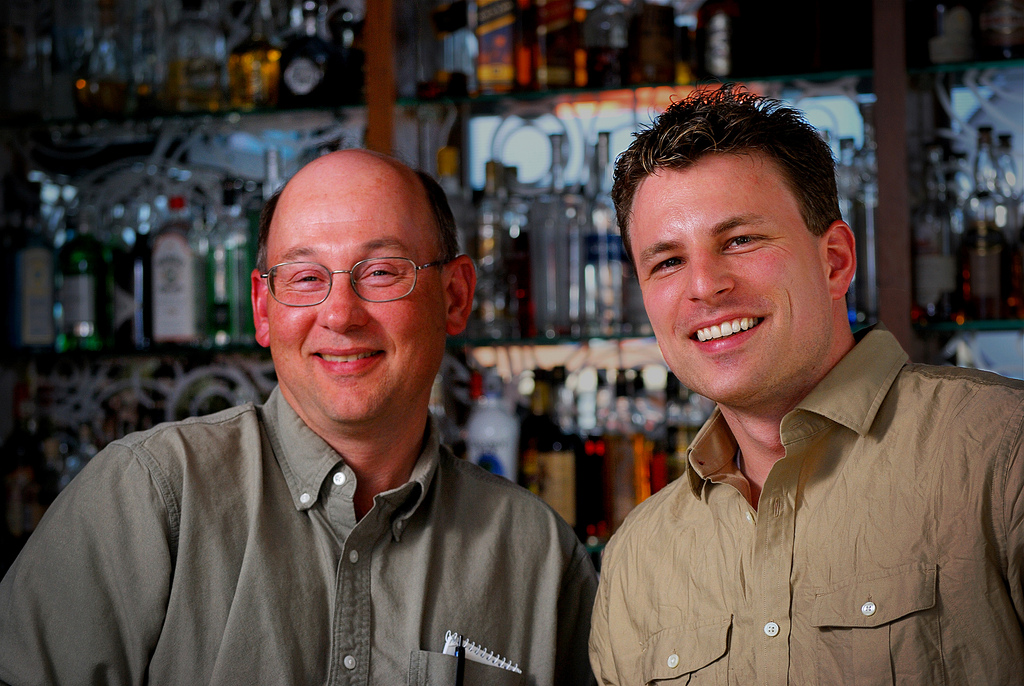 I still can’t see myself spending two hours to prepare meals on a regular basis. But this experience did erase my fear of the unknown in the kitchen and inspire me to try some new stuff from time to time. And who knows …

But I still don’t think God intended asparagus as food.

5 Responses to It’s OK If You Burn Yourself