We went to the game with our good friends Dale and LuAnn, Cougar season-ticket holders and serious baseball junkies. The last time we were at a Cougars home game w 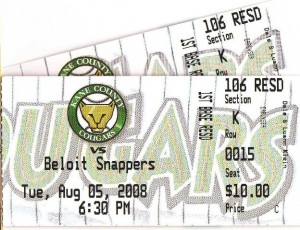 as April 13, 1991 — the first game the Cougars ever played. The park has changed quite a bit — grandstand seats and three outfield decks have been added. Our seats were behind the first-base dugout, 11 rows up. The park was perhaps half full, which meant there were 6,459 people in the park. What amazed me is that there were 6,413 (or so it seemed) places to buy food and they all doing a brisk business. We didn’t buy anything. Dale bought a cheeseburger on a stick. 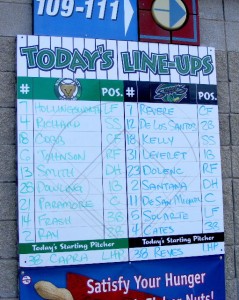 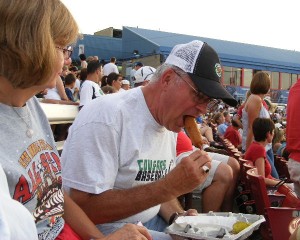 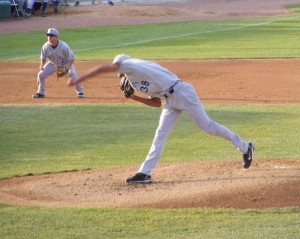 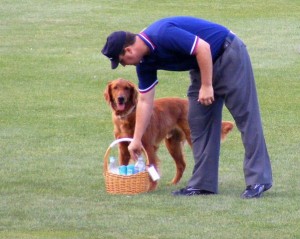 It was obvious to me early on that very few people were there to see the game. There was a pregame tumbling exhibition by some local kids group, quizzes and drawings, and several between-inning races of one sort or another. The featured attraction of the night was Jake the Diamond Dog. He caught Frisbees between innings, retrieved bats and brought water to the umpires — when he could find the umpires. He wasn’t sure which of the people on the field was the umpire, so he wandered about forlornly, attempting to deliver water to anybody who would pay attention to him.

There was a game, but it was rather dull. It started at 6:35. There were a few great fielding plays and a few really lousy fielding plays. The Cougar second baseman muffed at least three ground balls and the Snappers pitcher threw two balls past the first baseman. The Snappers ended up winning 5-1. (Click here to see the box score.) Perhaps half the crowd stuck around until the end, around 9:35.

As you’ve probably figured out by now, I’ve fallen in love with the panorama feature that came with my camera. There’s always a bit of a time lapse with panorama photos. Notice in the second one that the Snapper’s base runner is on second base and not on second base. And in the third one, the home plate umpire is behind home plate and by the mound and the Cougars don’t have a shortstop.

Here’s Elfstrom Stadium from halfway down the third base line.

Here’s the view from our seats at dusk.

And here’s the same view near the end of the game.

Just before the game began, several Cougar players stood in front of their dugout and tossed plastic balls into the crowd. I tried to get them to throw one to me by raising my hands and saying “I’ll bet you can’t throw this far.” It didn’t work, but somehow LuAnn got her hands on one and gave it to us.

And … As we entered the park, we were handed envelopes. Both my wife’s and mine contained coupons for a free ticket to a game later this season. We aren’t planning on going again, so if you’re interested, feel free to make a bid. (The current bid for both seats is $1. Do I hear $2? Remember, it’s a $20 offer.) 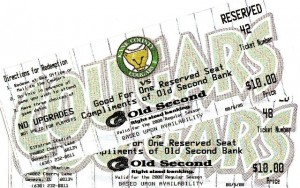 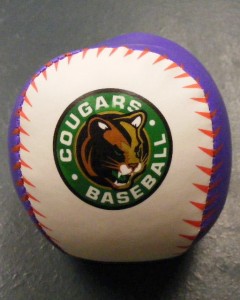