On Tuesday , we had four hours of free time between the afternoon and evening stretches in the booth. Kim knew of a beach north of San Diego that had been invaded by Harbor Seals, so we drove up and found it after following the GPS up and down every street in La Jolla.

The beach used to be the public swimming area, known as the Children’s Pool. About five years ago, Harbor Seals began hanging out there, and it quickly became a huge tourist draw. Some of the locals aren’t terribly happy about this and want the seals driven off, but for now, they’re protected. 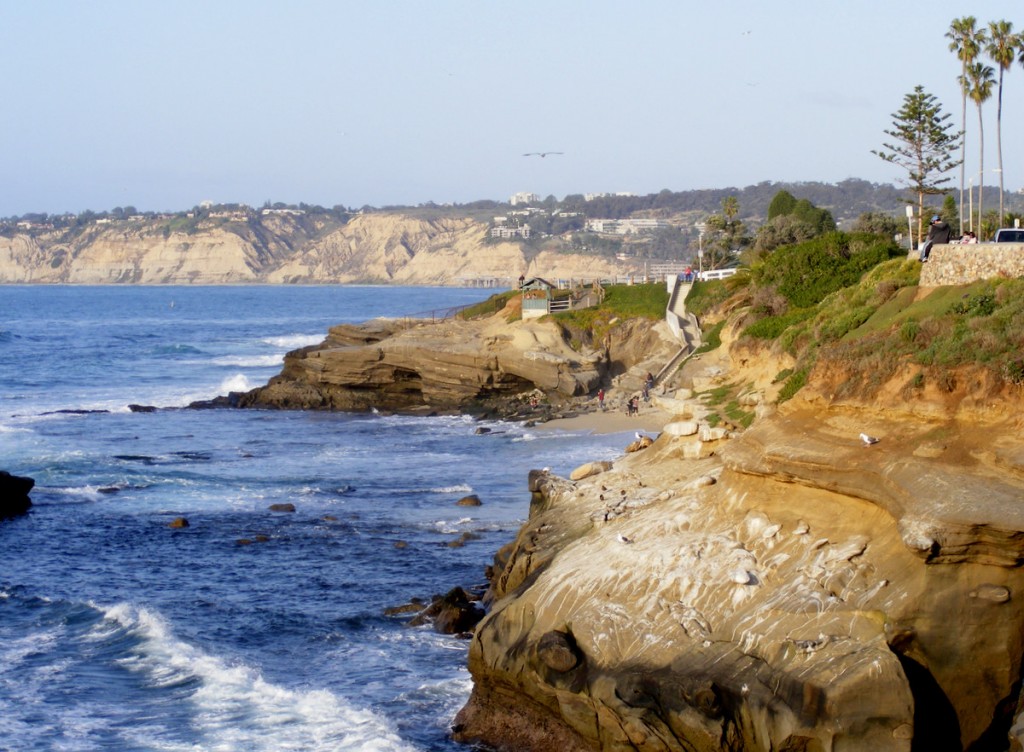 California Ground Squirrels were grazing in the wild flowers along the top of the cliff. 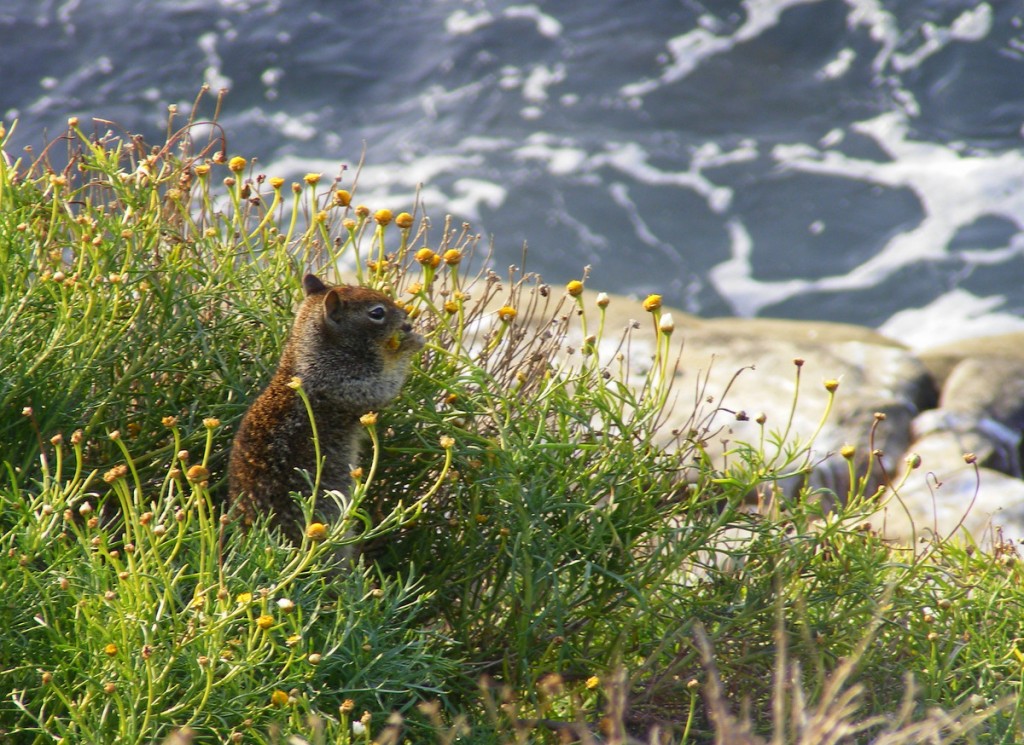 Several Heermann’s Gulls were standing about. This is only the second time I’ve seen one. The first one was an immature flying along the shore south of Imperial Beach when I was here for EPA in 2001. 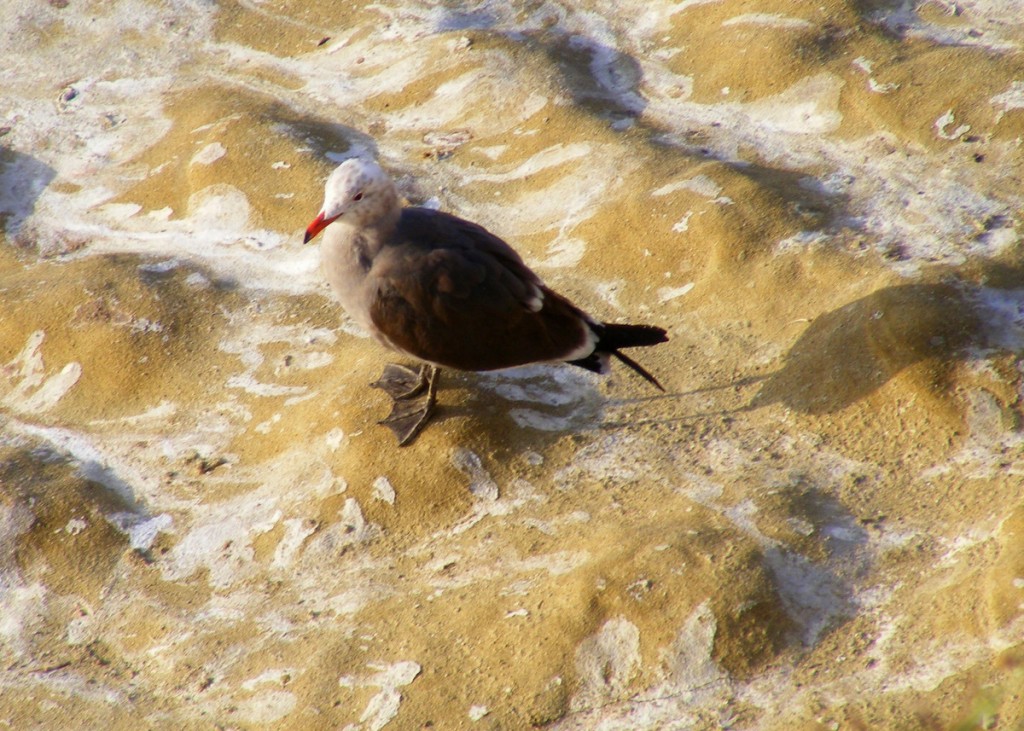 Here’s our first look at Seal Beach from the top of the cliff. I counted later, and there were approximately 180 Harbor Seals within the small bay. Margaret can be seen on the left in the white sweater. 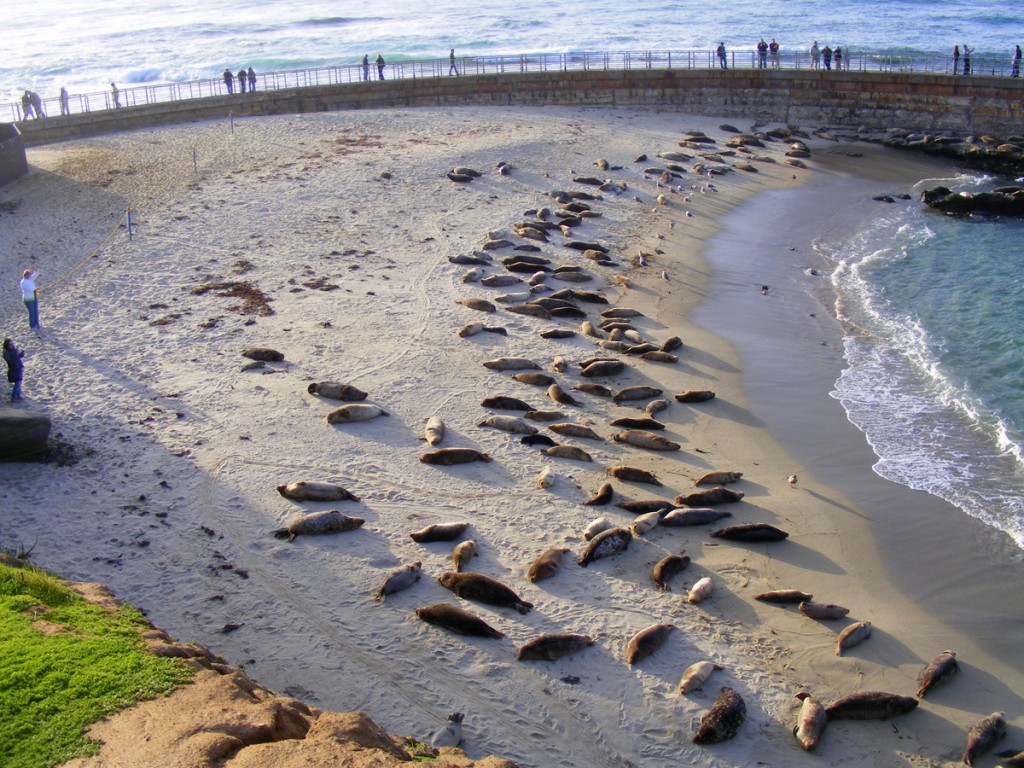 A low yellow rope was strung across the sand to keep us from getting too close to the seals, but even so, we weren’t more than 20 feet from the closest ones. They didn’t seem to pay the slightest attention to the crowds. 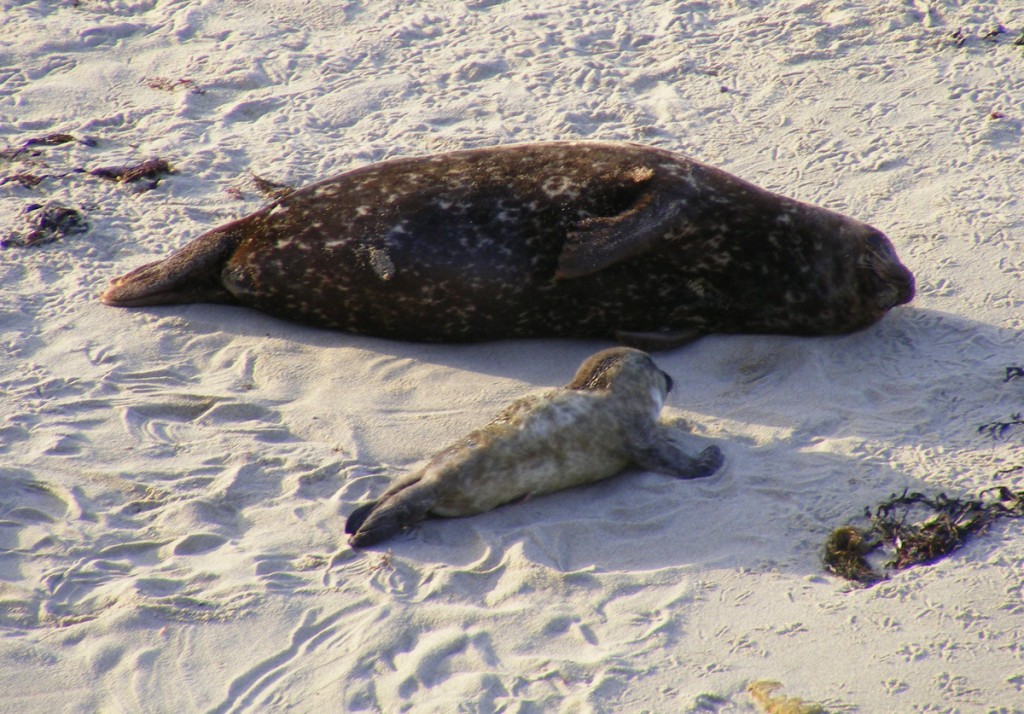 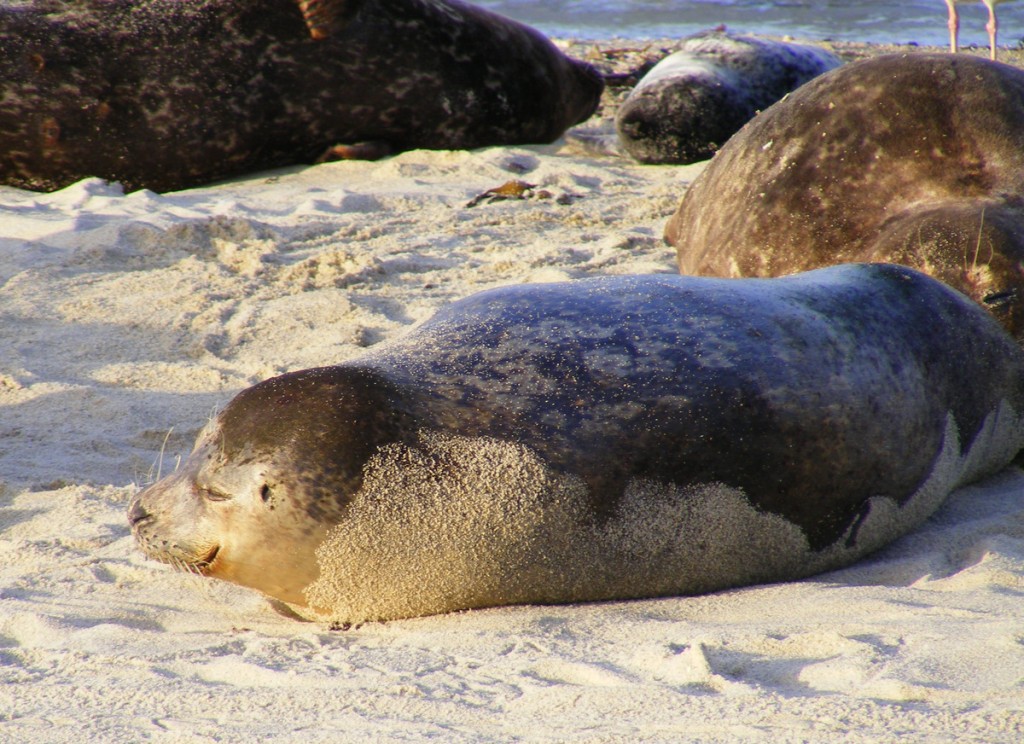 There were a lot of pups. A coworker of ours visited the beach a few days later and just missed the chance to see one being born by a couple minutes. 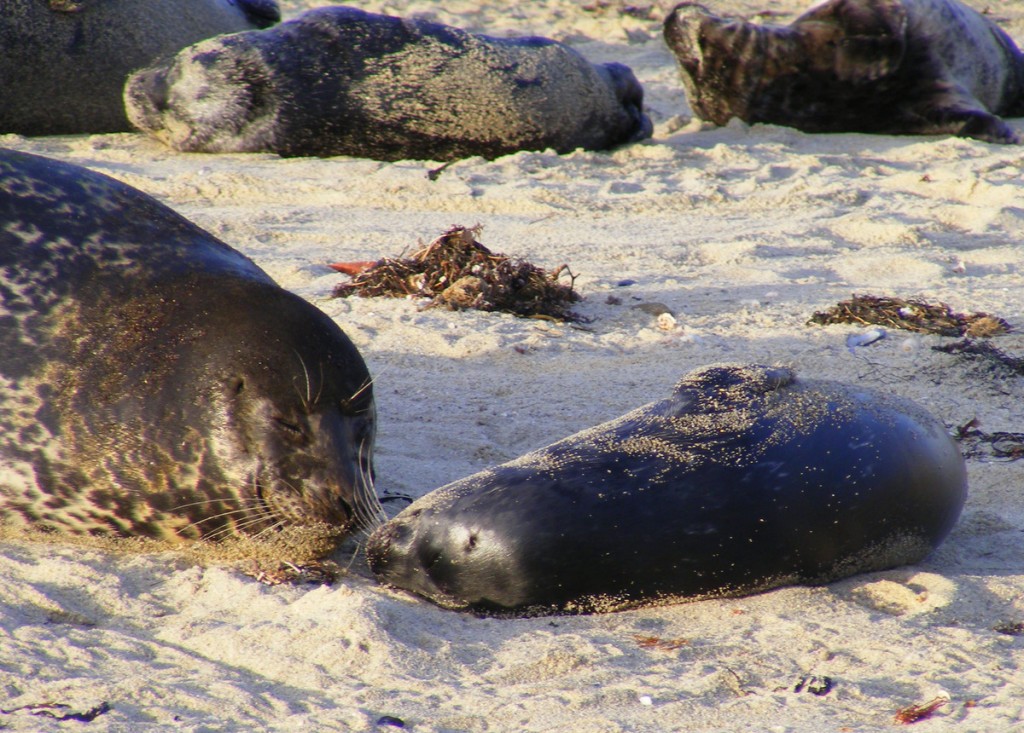 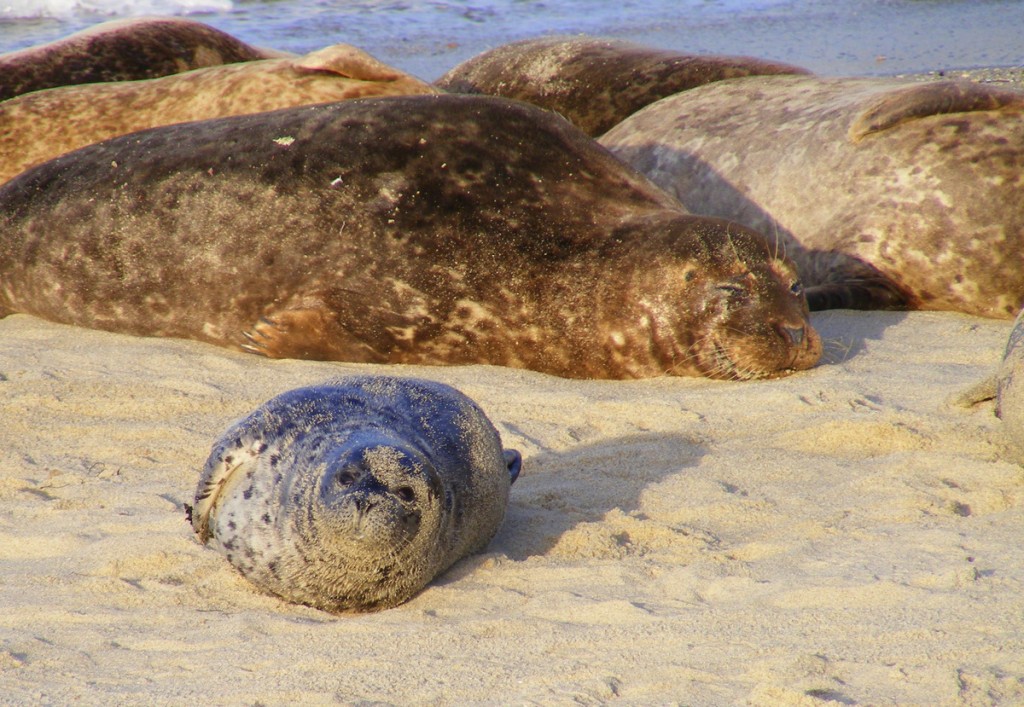 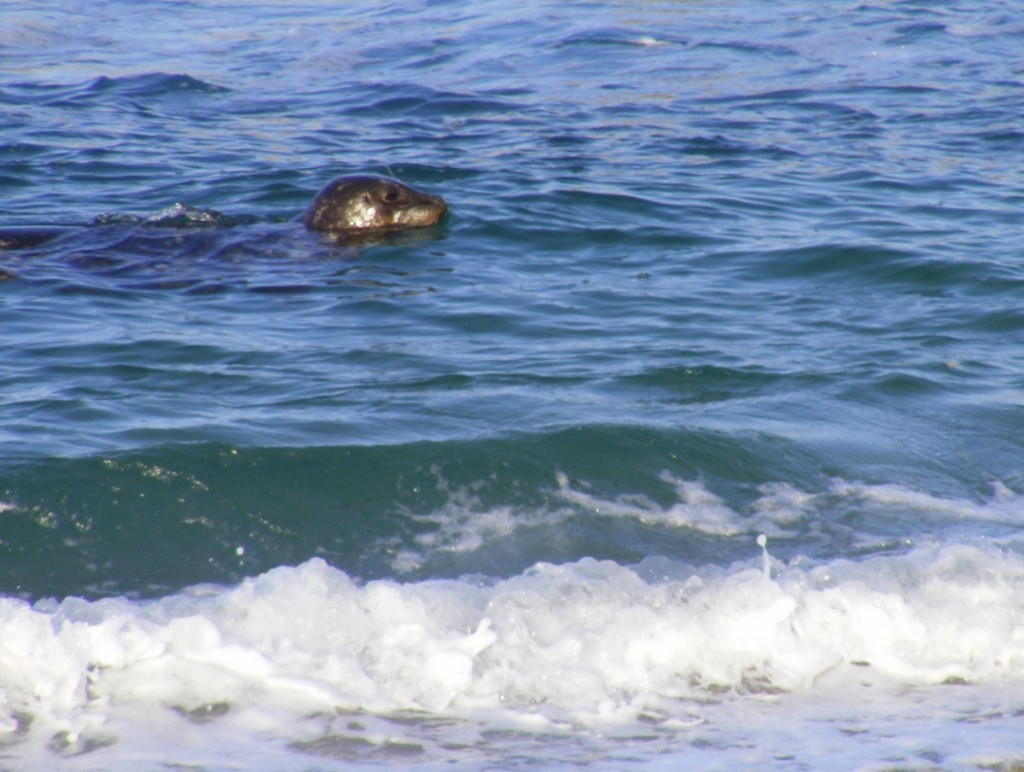 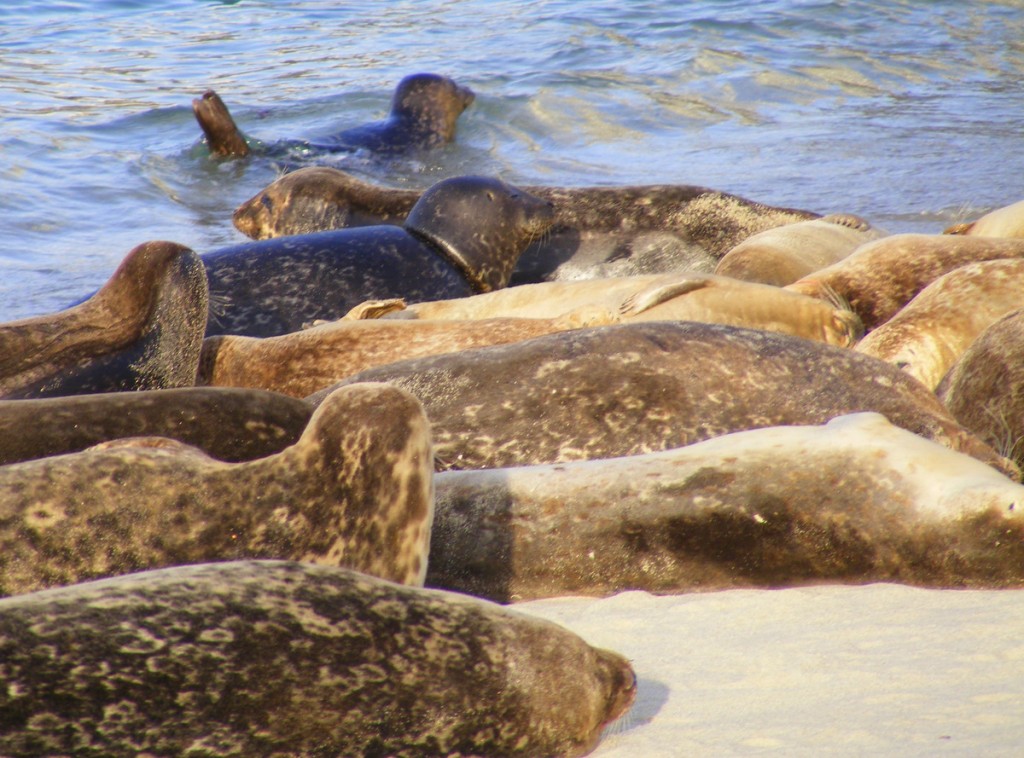 I moved west along the beach to get a better sun angle. I noticed one seal that was moving up the slope away from the water and the other seals. 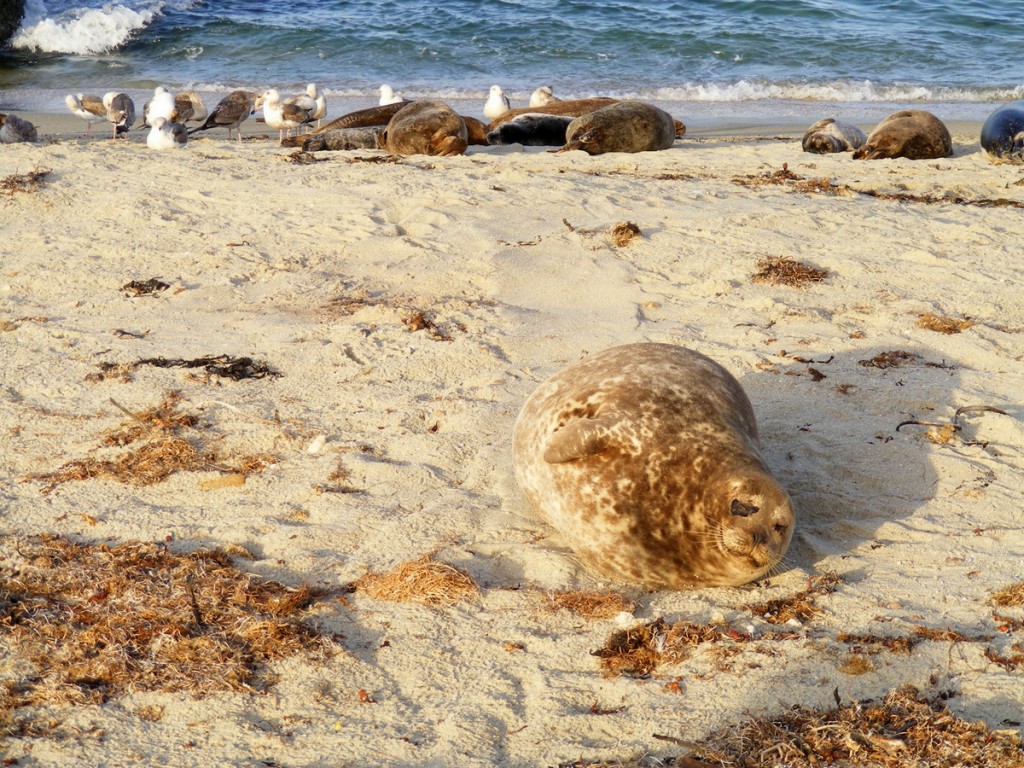 I was standing right where it was heading. It paused and seemed to look right at me. Then it started up the beach again. 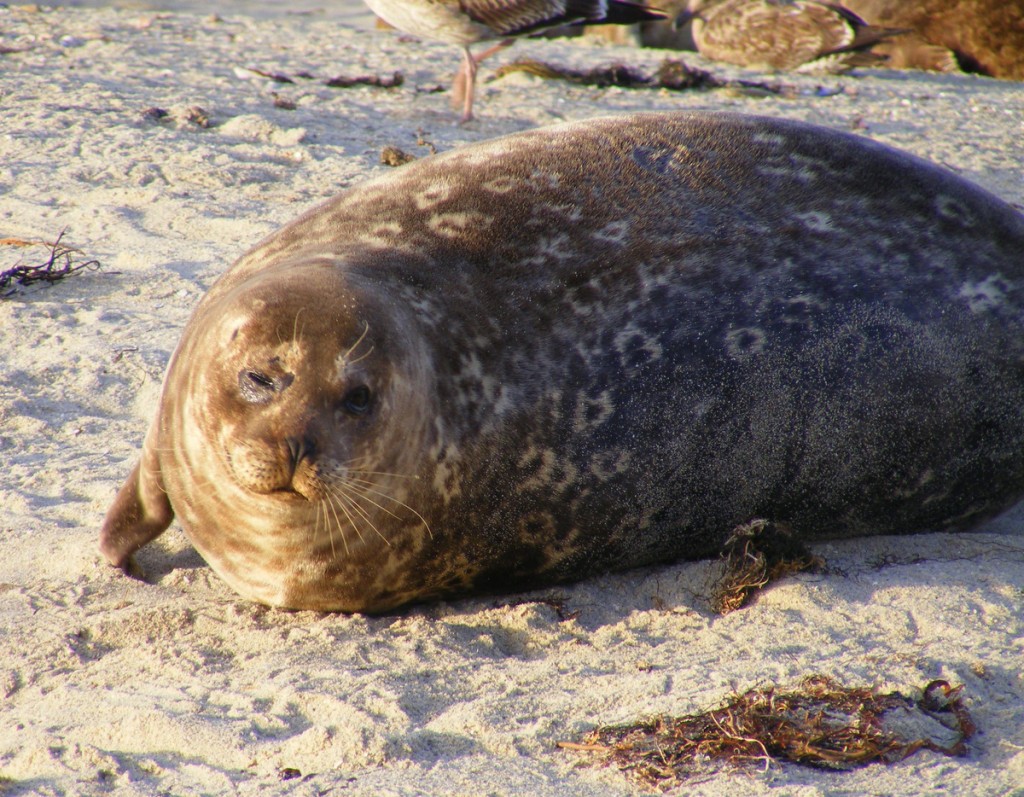 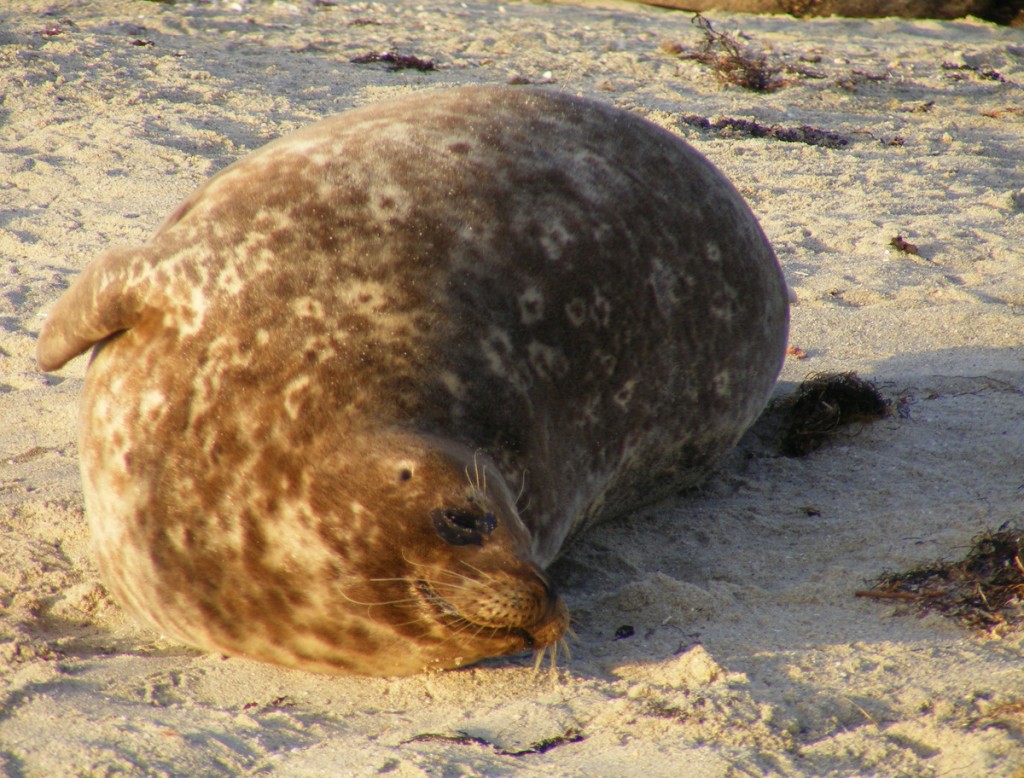 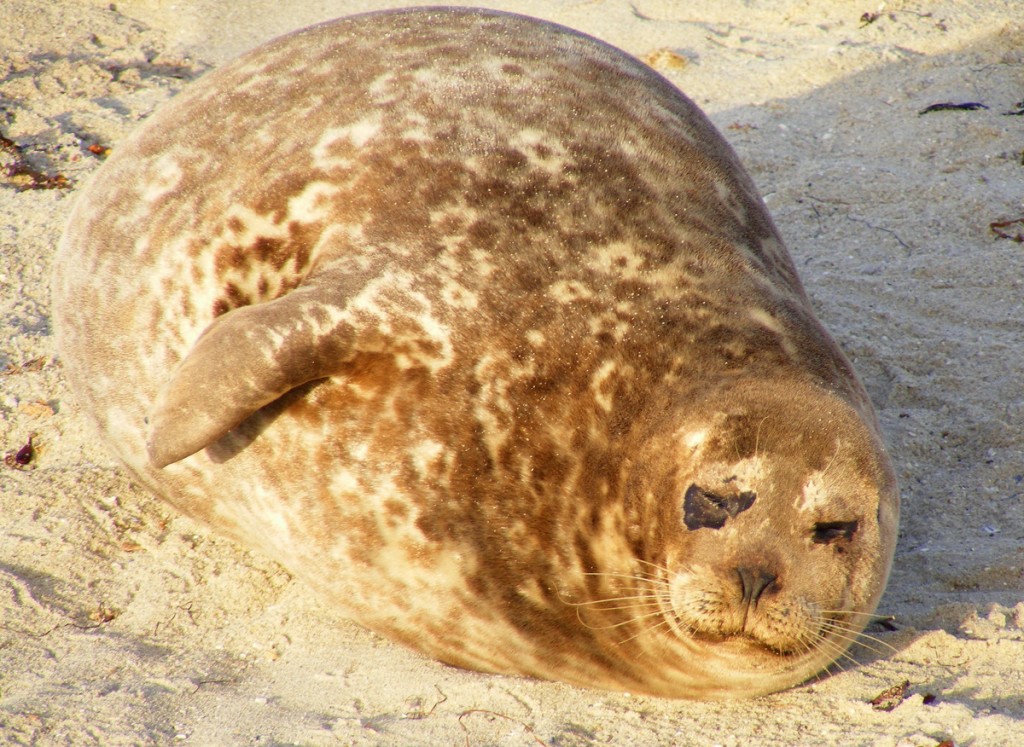 until it was no more than four feet from where I stood. We had that section of beach to ourselves for a minute or so. 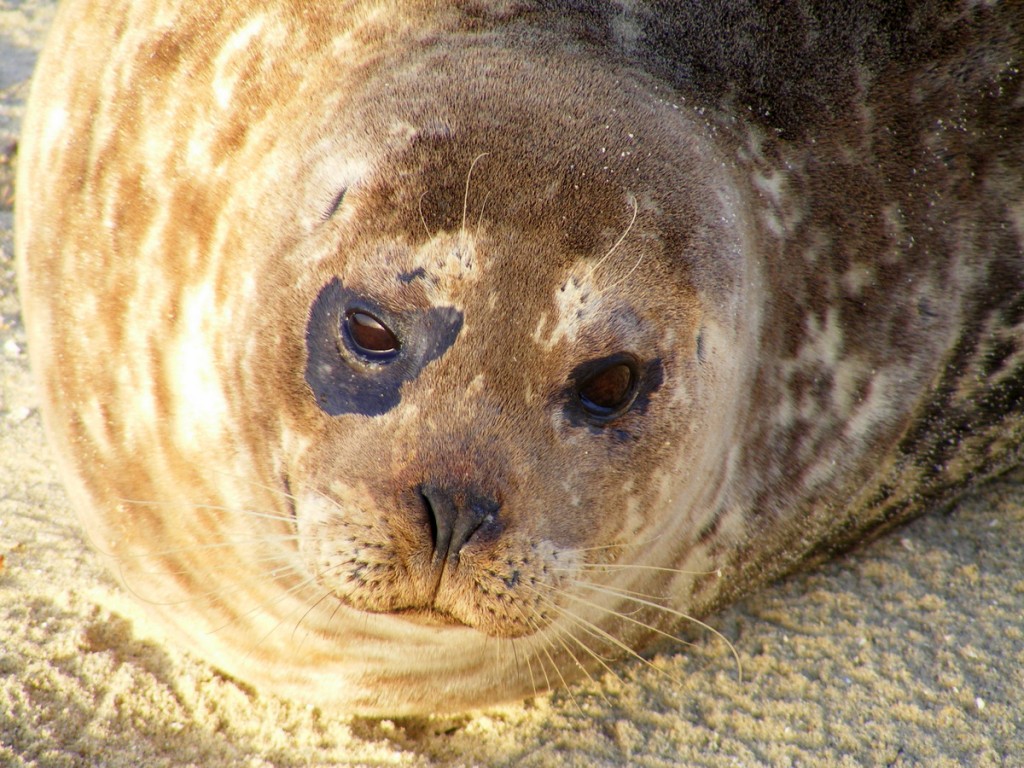 Then other people noticed how close the seal was and wandered over. The seal turned around and settled in for a nap. I have no idea why it decided to go so far from the water and the other seals and get so close to me, but it was pretty cool.

We walked out on the breakwater the formed the outer wall of the bay. Here’s what the bay looked like from the other side. 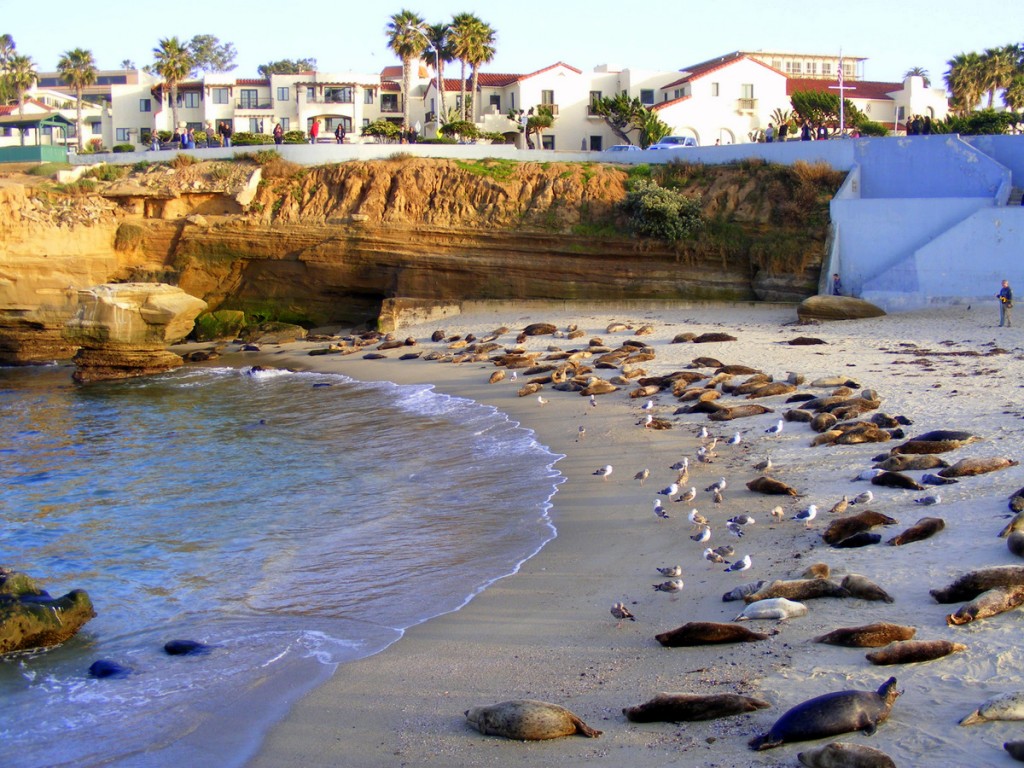 There were seals on the south side of the breakwater too, but not as many. Others were scattered about on rocks in the area. 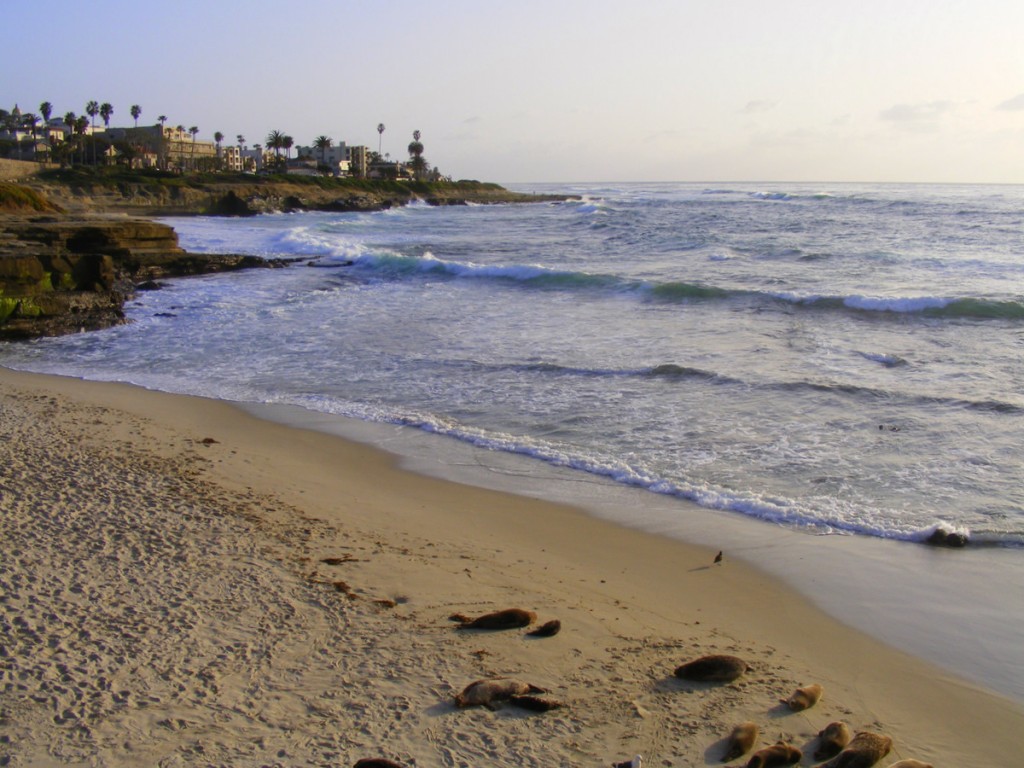 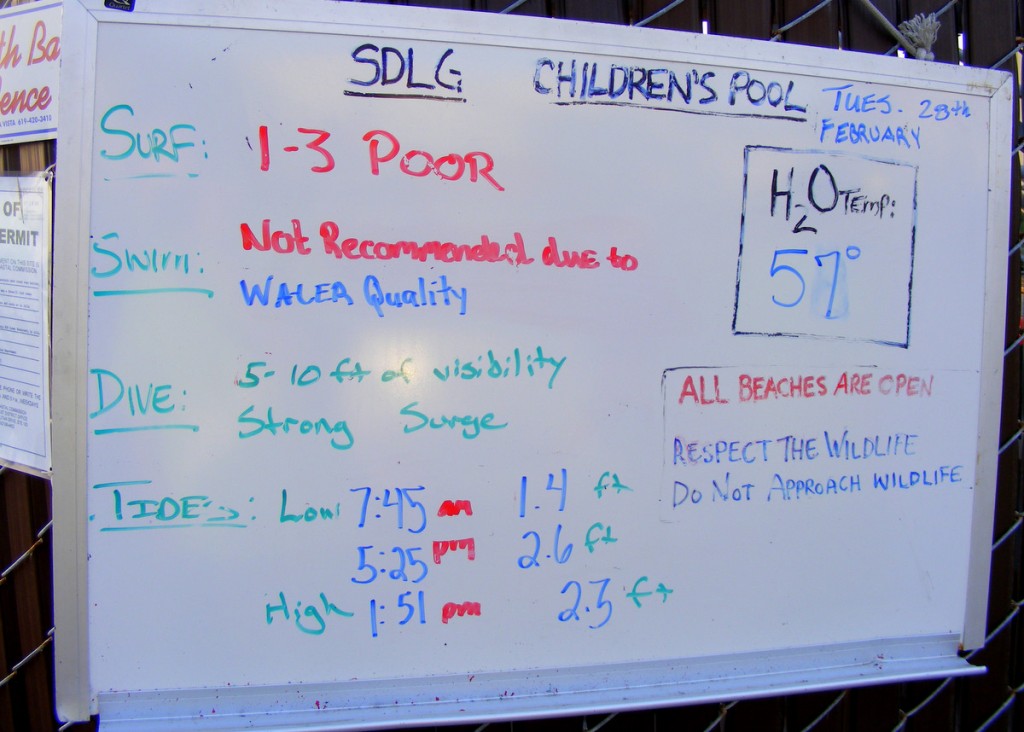 On our walk to Seal Beach, we noticed some California Sea Lions on a small rock not far from where we’d parked. They weren’t moving, so we didn’t stop long to look at them.

Here’s what that rock looked like from the beach. 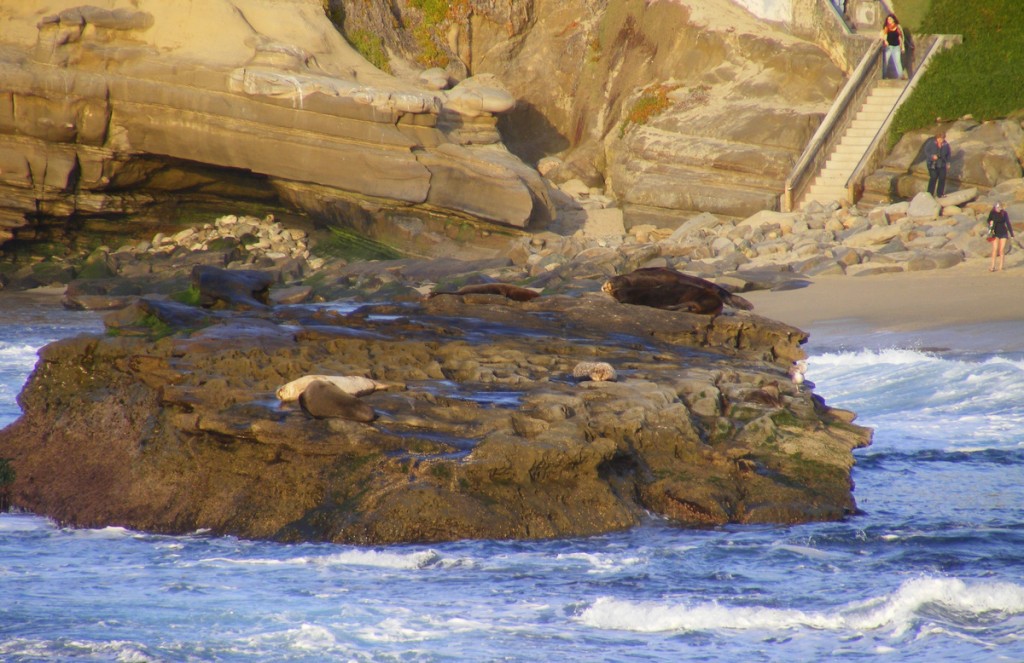 On the way back to the car, the sea Lions were more active, clambering about and howling at each other. 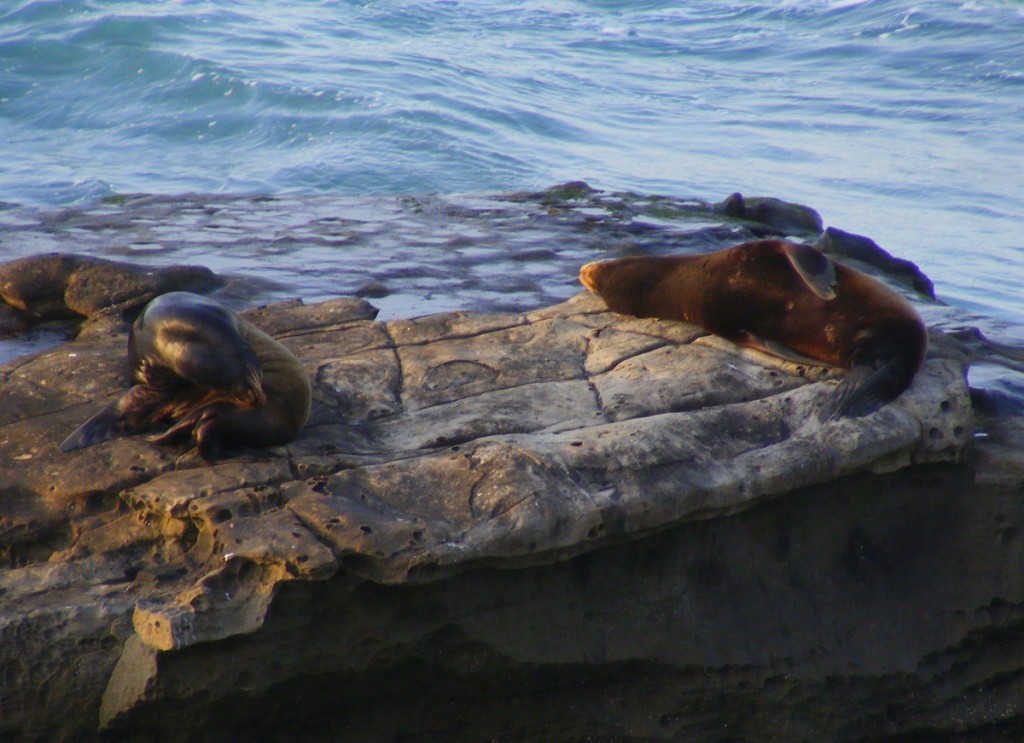 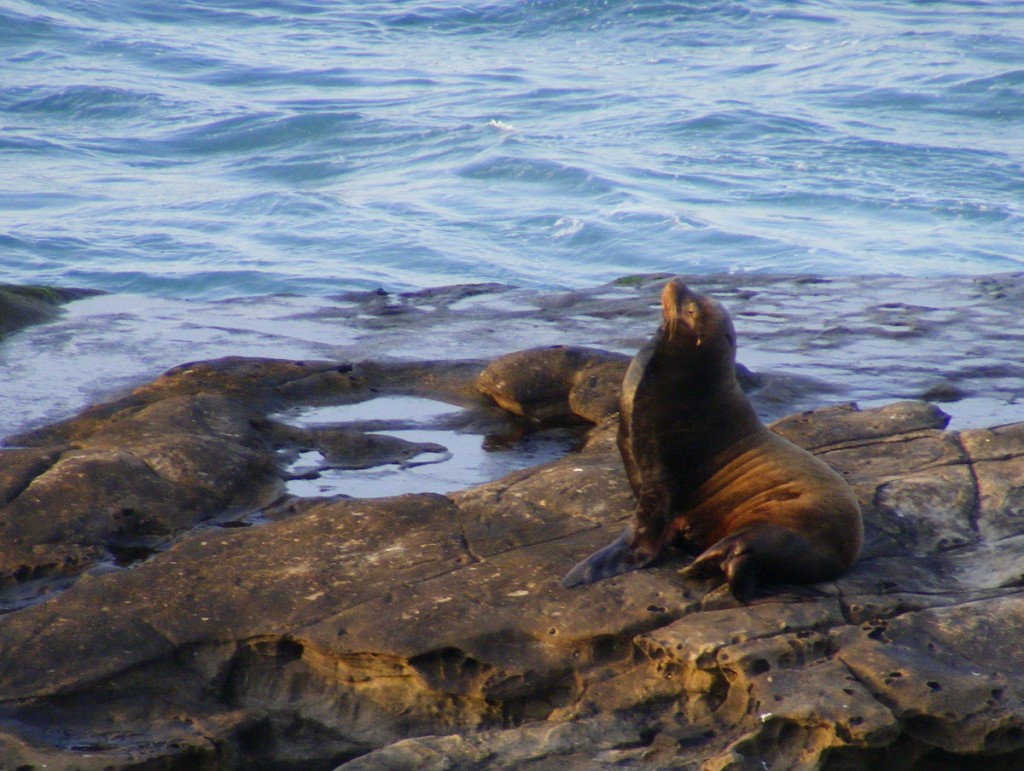 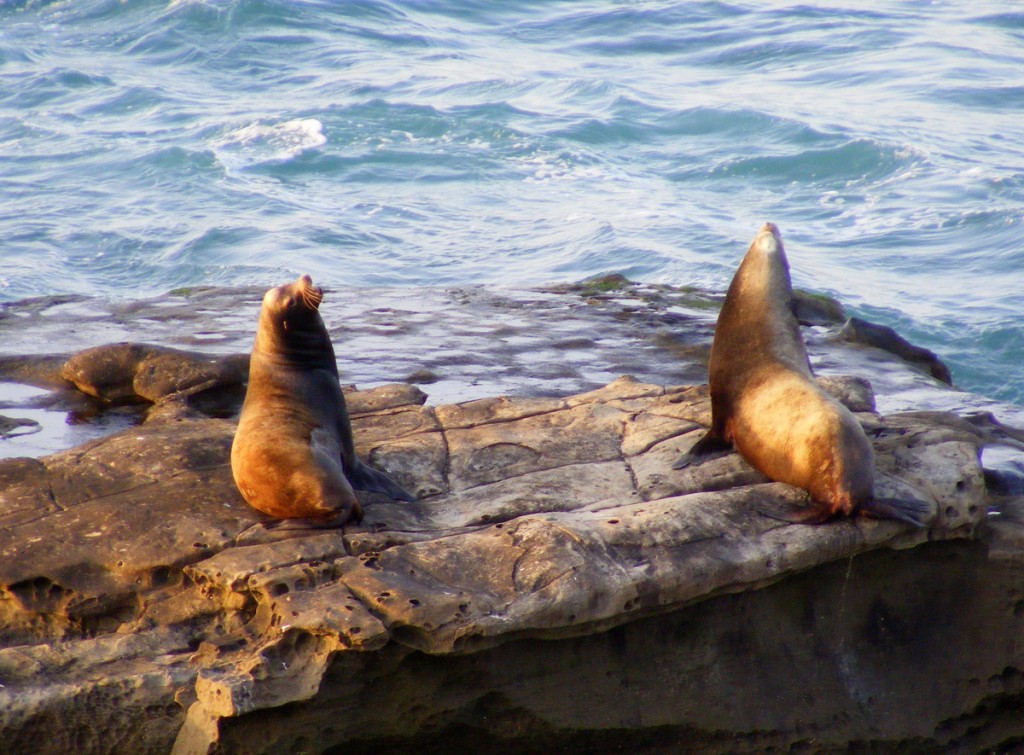 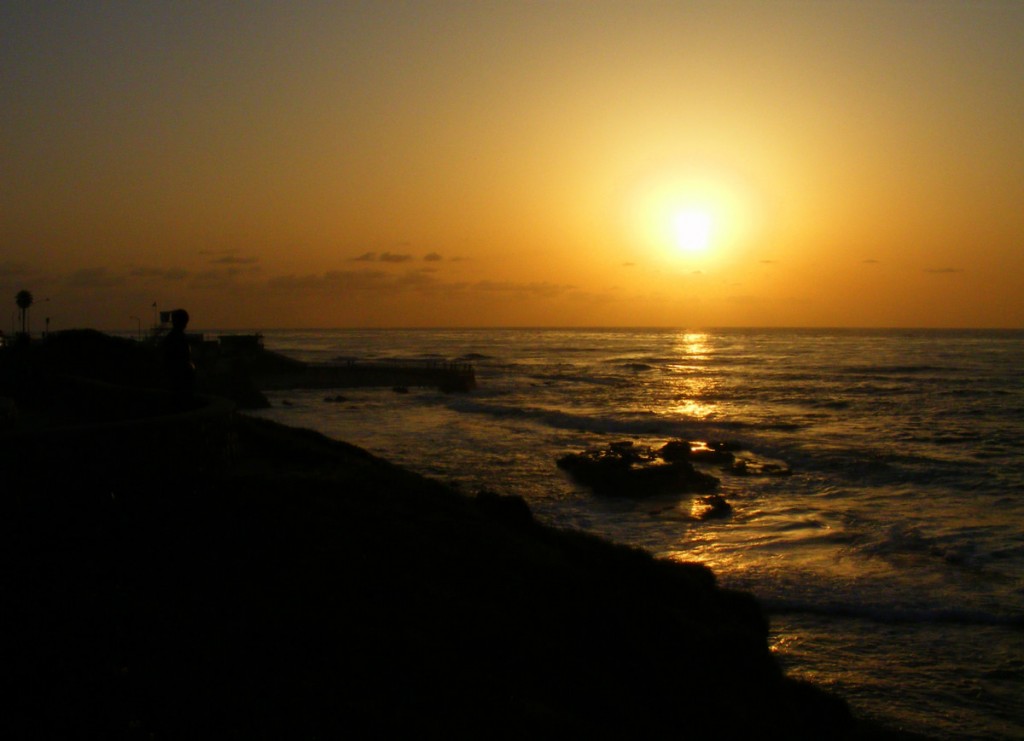 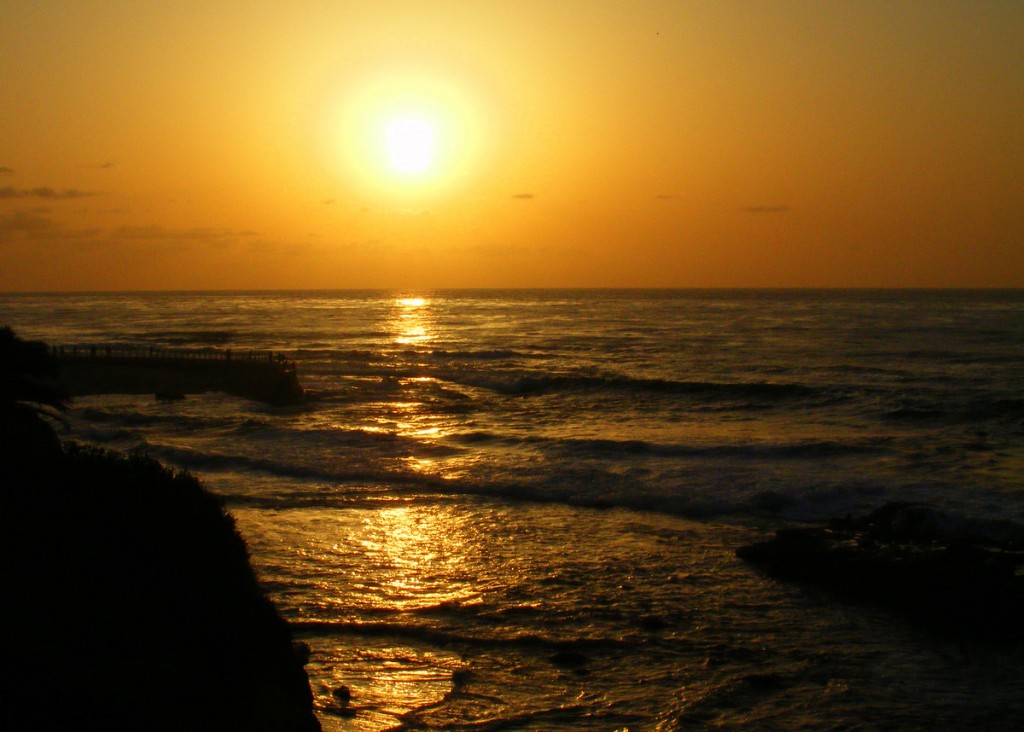 After the usual issues with trying to get six people to agree on where to eat, we settled on Wahoo’s Fish Tacos, in La Jolla. 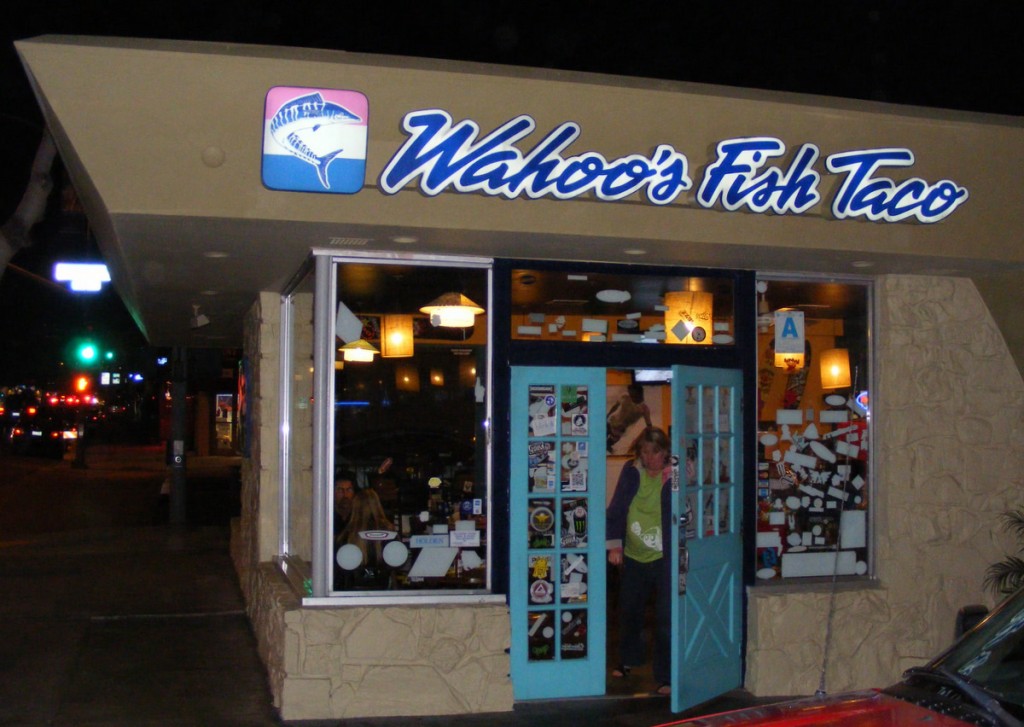 The place is evidently popular with surfers. The door was completely covered with stickers. 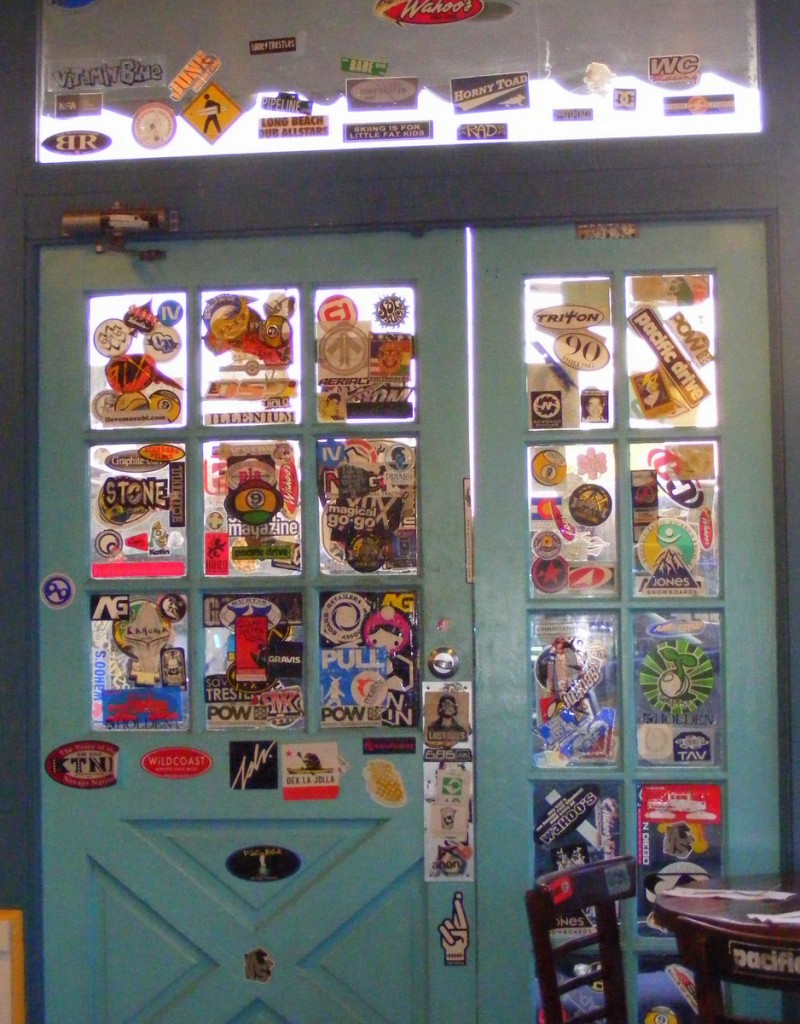 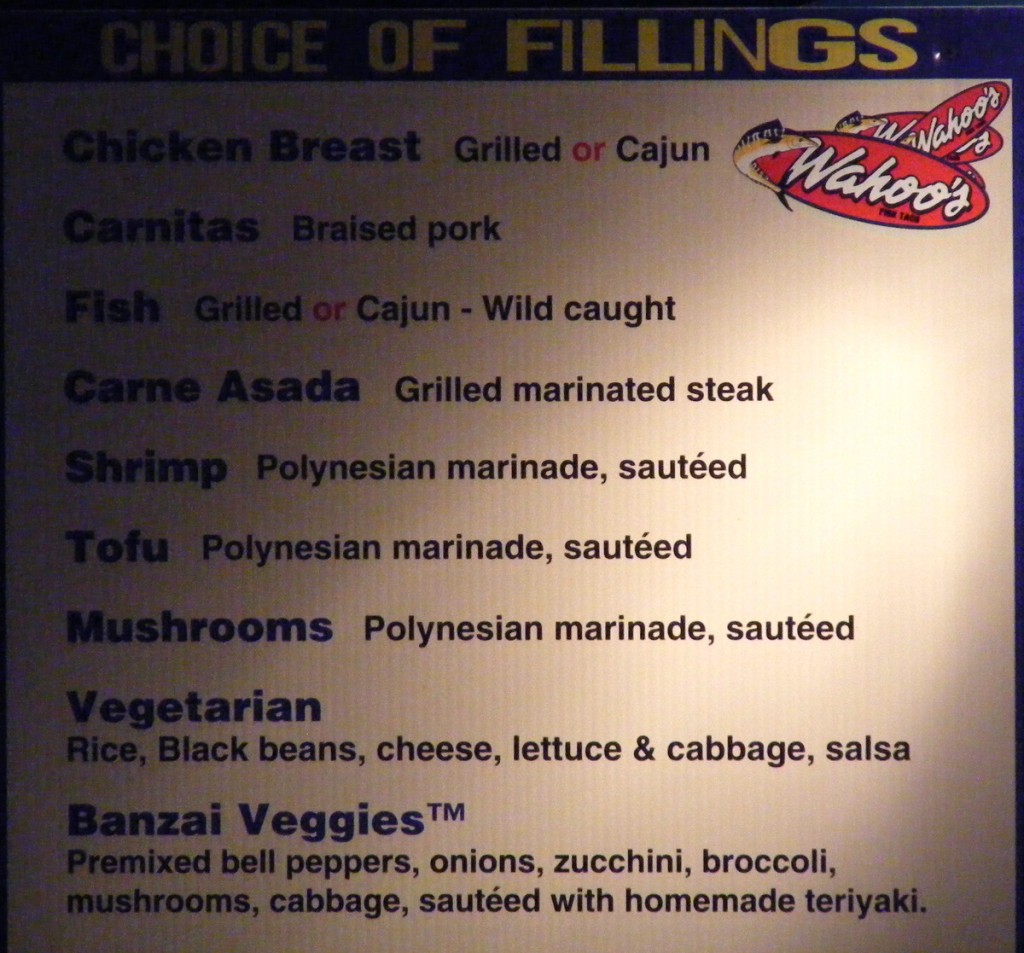 I’d never had a fish taco, and frankly, it sounded disgusting. But I was in the mood for adventure, so I ordered one, and one with shrimp. Neither of them were awful, but neither of them were very exciting either. In fact, I couldn’t tell them apart. 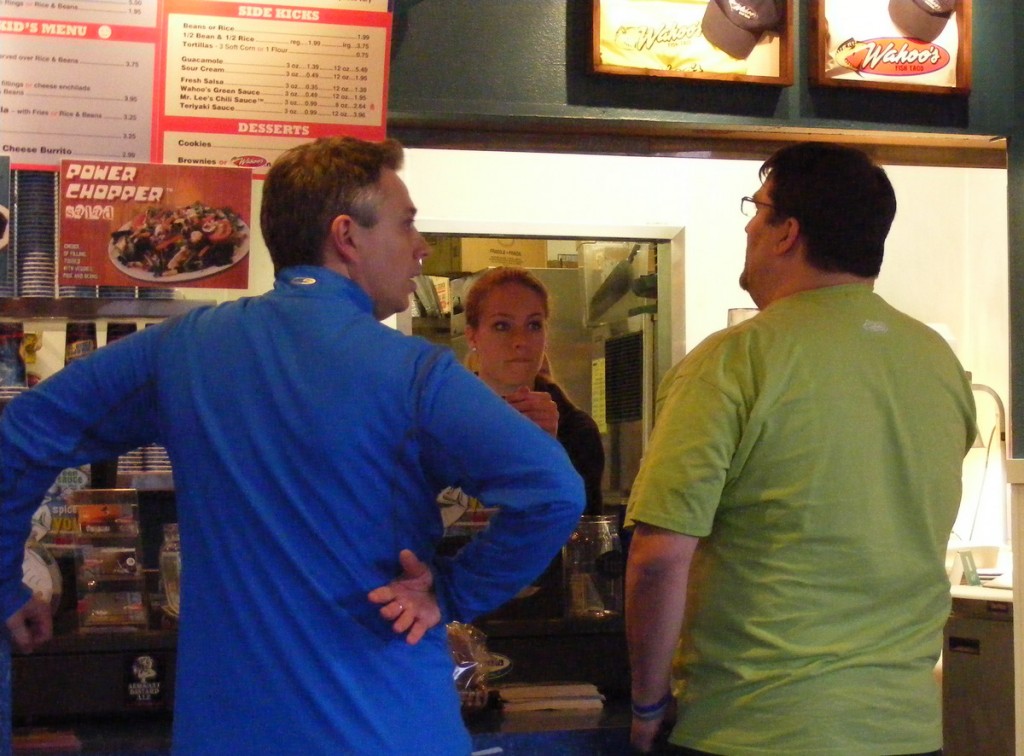 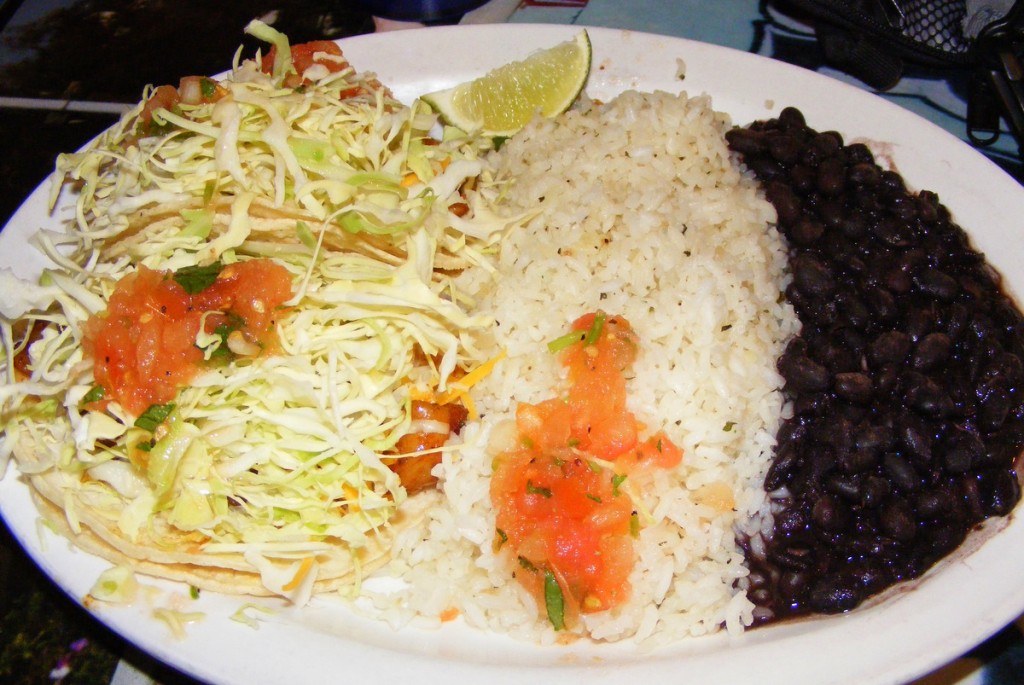