If you had asked me at almost any point in my adulthood whether I wanted to go to Disney World, I would have laughed and said no thanks. But a couple years ago I came to the realization that I would probably never get to many of the places I’d like to go or do many of the things I’d like to do in my life.

Instead of being depressed, I decided to relax and enjoy those place I did get and those things I had a chance to do. So when my work sent me to Orlando three Januarys in a row, I decided I’d see Disney World. Last year, I went to Epcot. This year it was Magic Kingdom.

I went with four coworkers who are also good friends. We spent seven hours in the park and only stopped once to rest. Here’s a quick look at what we saw and did with some random observations thrown in.

Be Our Guest Restaurant — Our first stop was lunch. The restaurant had a Beauty and the Beast theme and the most convoluted ordering system I’ve ever experienced. During the long wait, we looked at menus posted in the hallway. We finally got to a door where a woman asked us if we were paying with cash or charge. We were then directed to one of several registers to order and pay. We were given plastic roses before entering one of three large dining rooms and finding a table. A waiter brought us our food a few minutes later. We asked him how the rose directed him to our table and he said it was magic. I’m skeptical. My grilled ham and cheese sandwich and fries were pretty good. 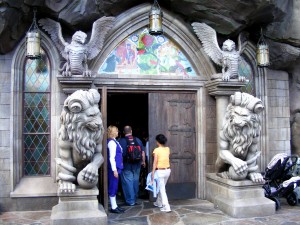 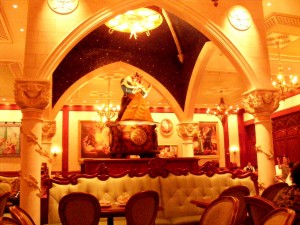 “it’s a small world” — Not so much a ride or attraction — more of a torture device. We floated through rooms filled with tiny models dressed in the clothing of different countries. The entire time, that whiny, high-pitched, infinitely-annoying song played over and over and over and over again in different languages. If you ever want to force me to reveal secret information or something, just threaten to send me on this ride again. 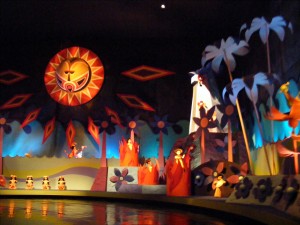 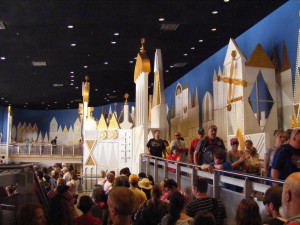 We were there at the right time of year. The lines for the restaurant and the first few attractions were fairly long, but moved fast. As the day went on, the lines got shorter and at the end of the day, we were walking right up to rides without any wait at all.

Haunted Mansion — I have photos to prove I was there, but it made very little impression on me. I have to struggle to recall anything about it. 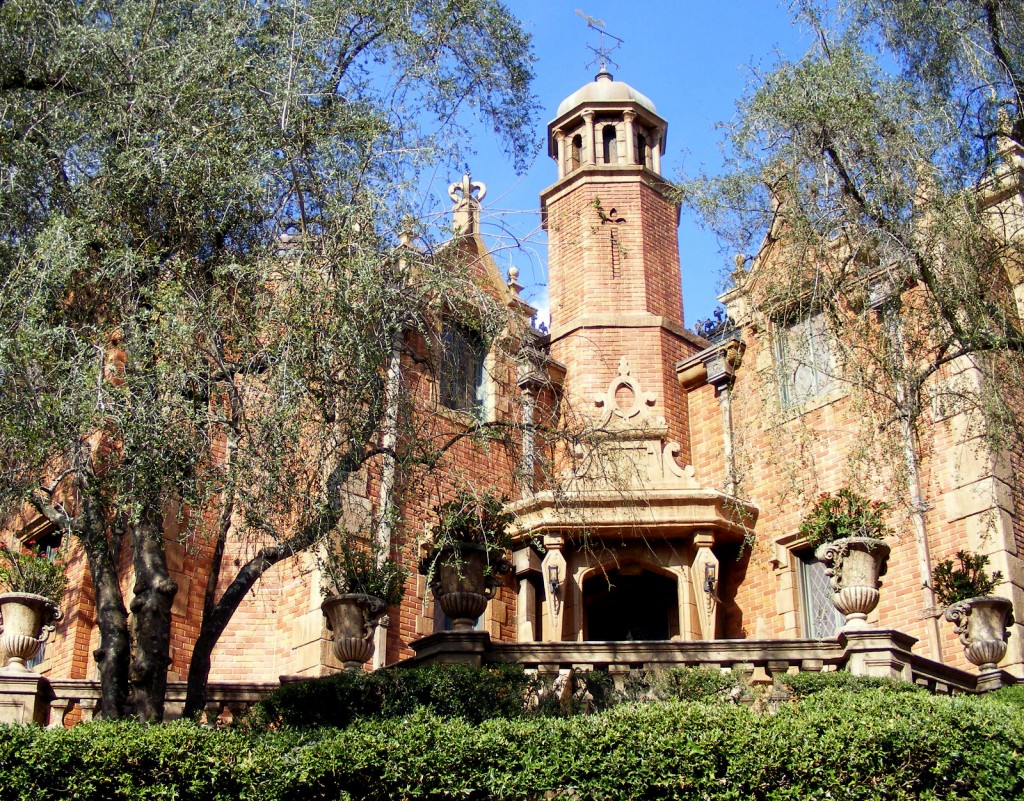 Big Thunder Mountain Railroad — A roller coaster in the guise of a runaway mine trail. It didn’t have the huge drops of the coasters at Six Flags, but it was a lot of fun and seemed to last longer than most coaster rides. 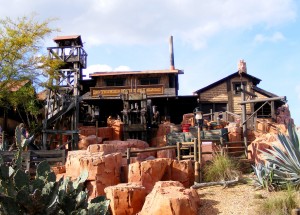 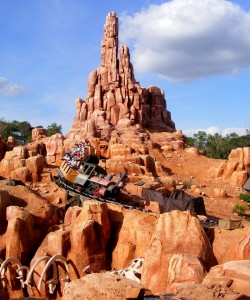 Pirates of the Caribbean — Definitely one of the highlights of the day. It was fun to see scenes from the movies, but even apart from that I was impressed by the detail. At one point, a “cannon ball” burst of air shot past my head with such force, it felt like I’d been hit with a pillow. 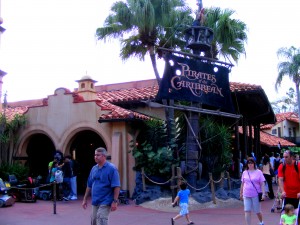 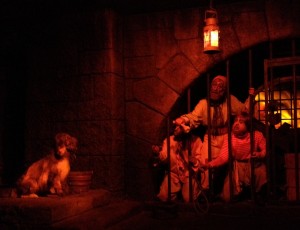 Enchanted Tiki Room — We sat on benches while animatronic birds and monkeys sang a handful of songs. I have no idea who the target audience is for this show — other than exhausted parents so desperate to get out of the hot Florida sun and sit down that they don’t care what they see. This was up there with “it’s a small world” on the weird scale. 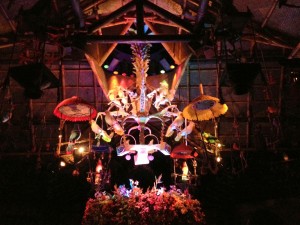 Jungle Cruise — A boat ride through the jungles of the world, complete with animatronic people and animals. The guide kept up an impressive non-stop banter of corny jokes. It was over-the-top silly, and, for that reason, fun.

We walked past Cinderella’s Castle where Mickey and His friends were doing a song and dance, but we only stopped long enough for pictures. 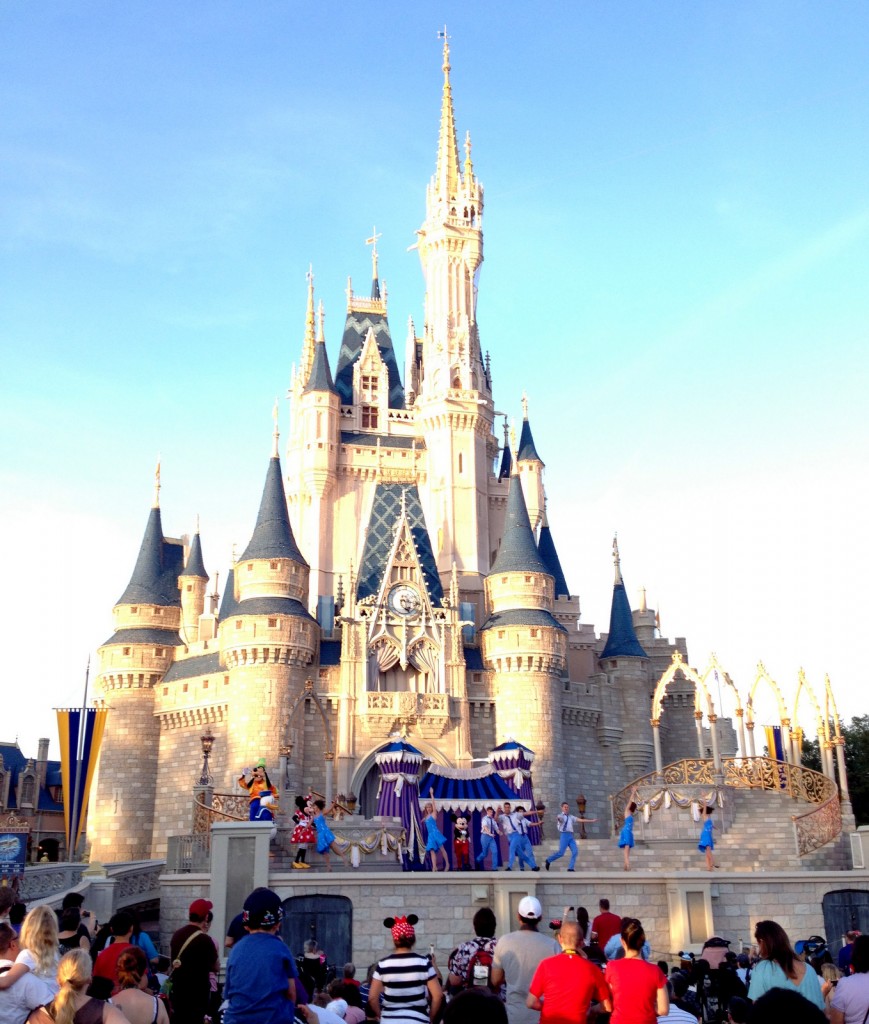 Space Mountain — An indoor roller coaster, most of it in pitch darkness. I enjoyed it. 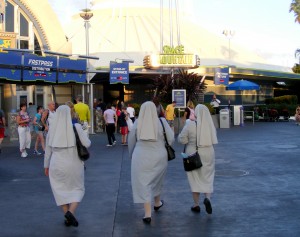 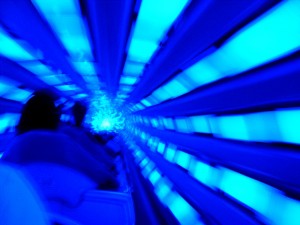 Buzz Lightyear’s Space Ranger Spin — I have to admit that I was more than halfway through this ride before I figured out I could control which way my space car was facing and that I was supposed to be shooting my lasers at targets. I was busy taking pictures anyway. 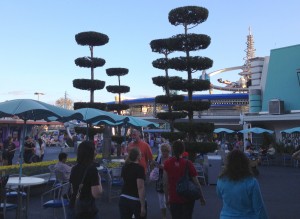 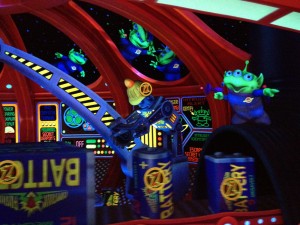 Monsters, Inc. Laugh Floor — I wasn’t allowed to take any pictures of this show. Mike Wazowski and other monsters tried to get us to laugh using interactions with members of the audience. It was very impressively done.

Walt Disney’s Carousel of Progress — One of the oldest attractions at Magic Kingdom (if I have my facts straight). We sat in a moving room that circled a set of stages with animatronic people demonstrating how a typical family would live during different decades of the 20th and 21st century. 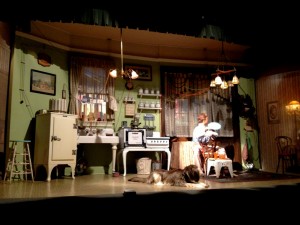 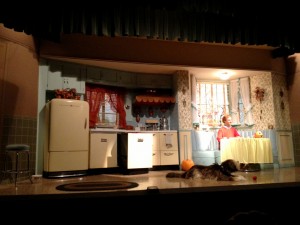 For supper, we had hot dogs from Casey’s Corner, then sat at the end of Main Street, U.S.A. and waited for the fireworks show to start. 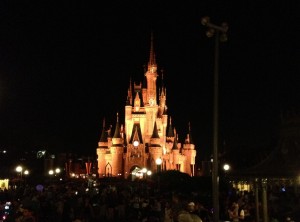 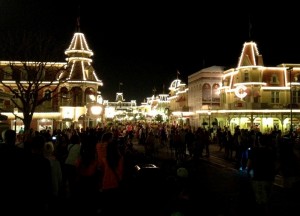 The light show on the castle was amazing. The fireworks were also well done. We dashed off just before the end of the show so we could beat the rush to our shuttle bus that took us back to our hotel. 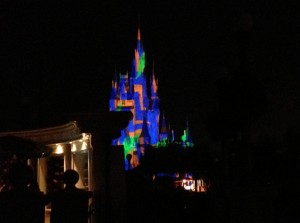 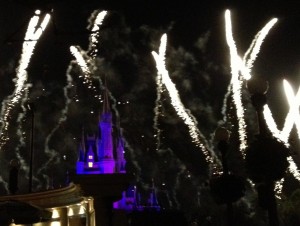 We hit all the major attractions. I left feeling like I’d “done” the Magic Kingdom.

Magic Kingdom wasn’t what I expected. I pictured more of a cartoon land, with Disney characters standing around in scenes from the movies. It felt quite a bit like Epcot to me, particularly in Tomorrowland. We saw Jack Sparrow, Winnie the Pooh and Tigger, Merida from Brave and Mickey, Minnie, Goofy and Donald Duck on the stage in front of Cinderella’s Castle.

I’m not sure I can define exactly what Disney does, but they do it excellently. All the same, I prefer serendipitous, discovered adventure over the manufactured kind. But I’m glad I went. I had a very good time.

Would I go again? It might be worth it just to run around photobombing the thousands of photos being taken every second.