Holiday weekend. We wanted to do something. We knew most places would be crowded. We decided to tour the shops in Manitou Springs to keep the driving to a minimum. The free parking lot was full, but we found one of the last spots in an inexpensive pay-to-park lot.

We hiked up one side of the street and down the other. I let my wife pick which stores we went inside, and she picked about 10 of them. Here’s what we saw.

This shop is the only place where we bought anything. My wife found a tiny pine tree for her collection. 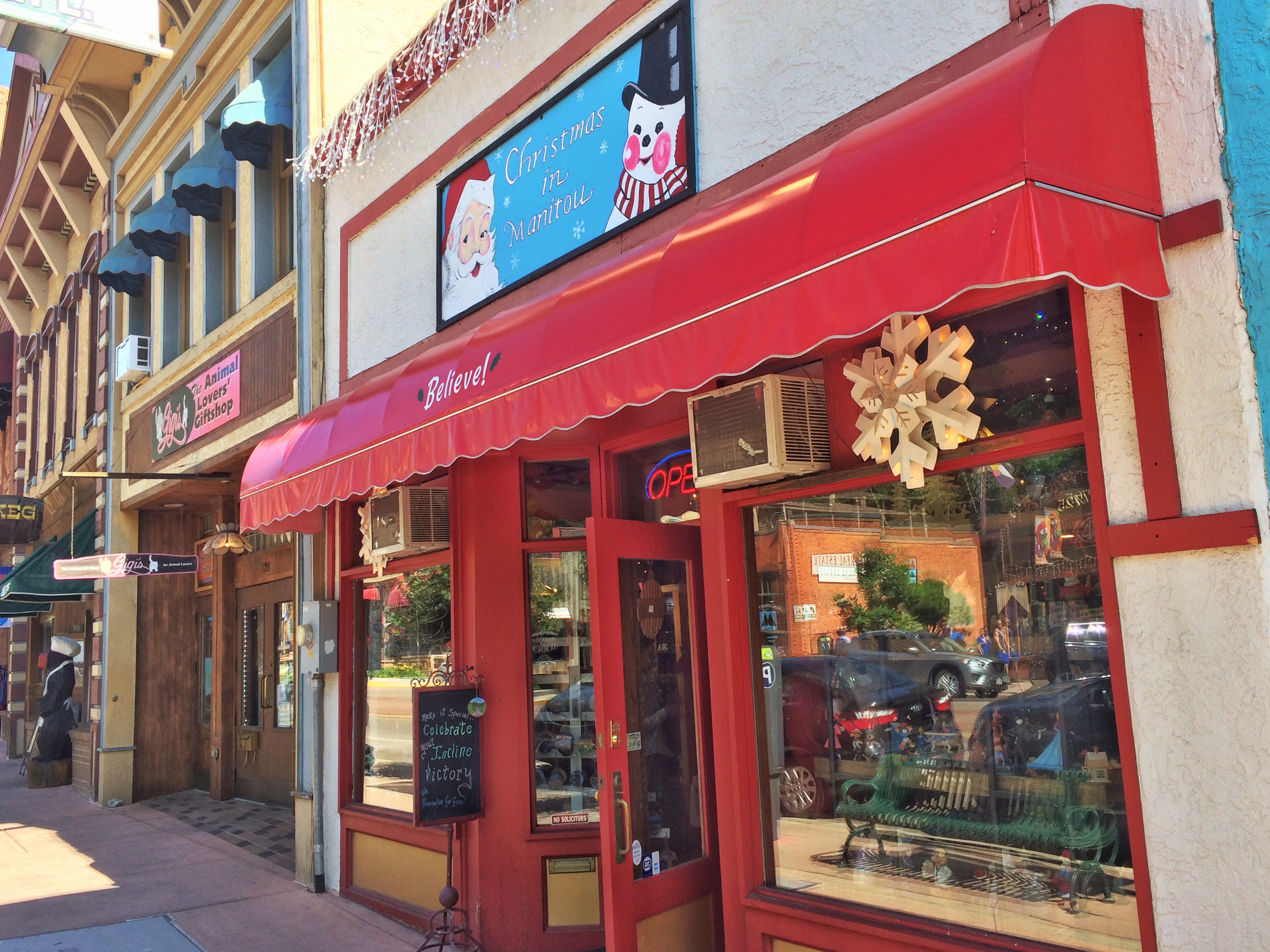 The incline can be seen as the line on the mountain in the back left. 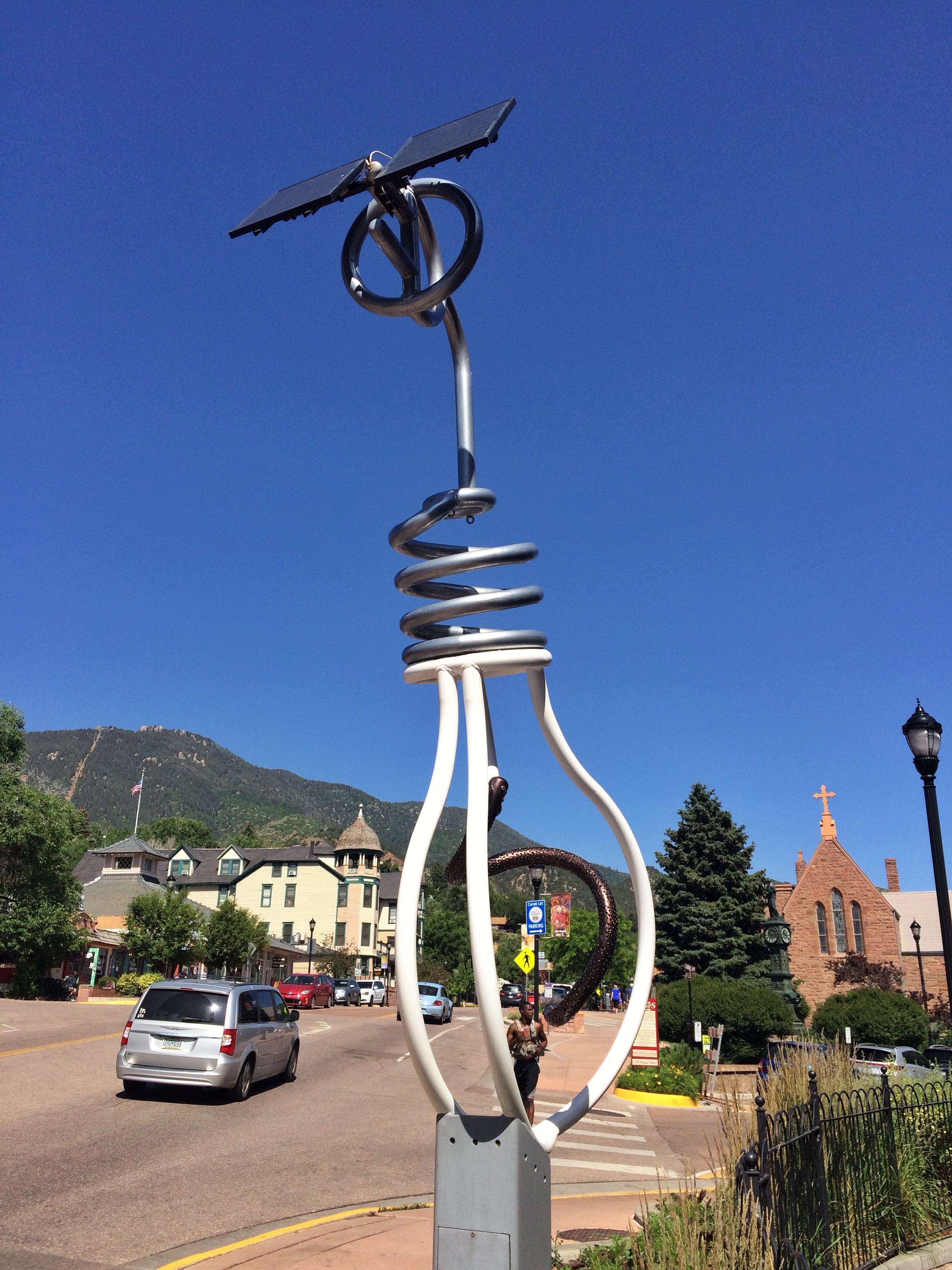 We wandered into a chocolate shop. The young woman in this photo offered us free samples. But before she gave them to us, she gave us a spiel on the healthy benefits of their chocolate. She very shortly began to sound like a snake oil salesman. She kept throwing around the term “super food,” explained how organic and unprocessed it all was, and claimed it could cure many, many things, including diabetes. When we finally got the samples, they tasted like chocolate. She pushed us to purchase some, but we resisted. 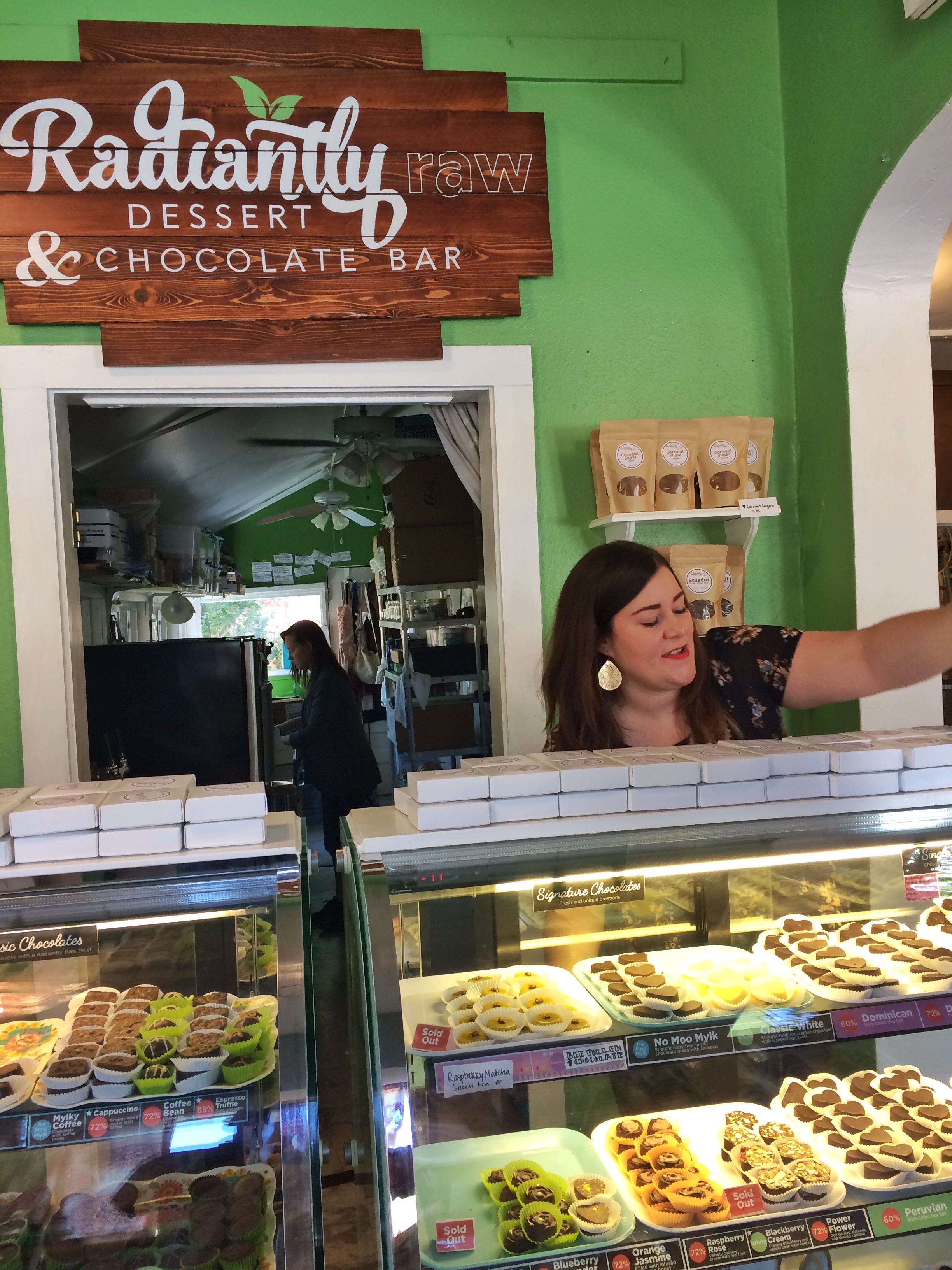 Fountain Creek running behind the shops on Manitou Avenue. 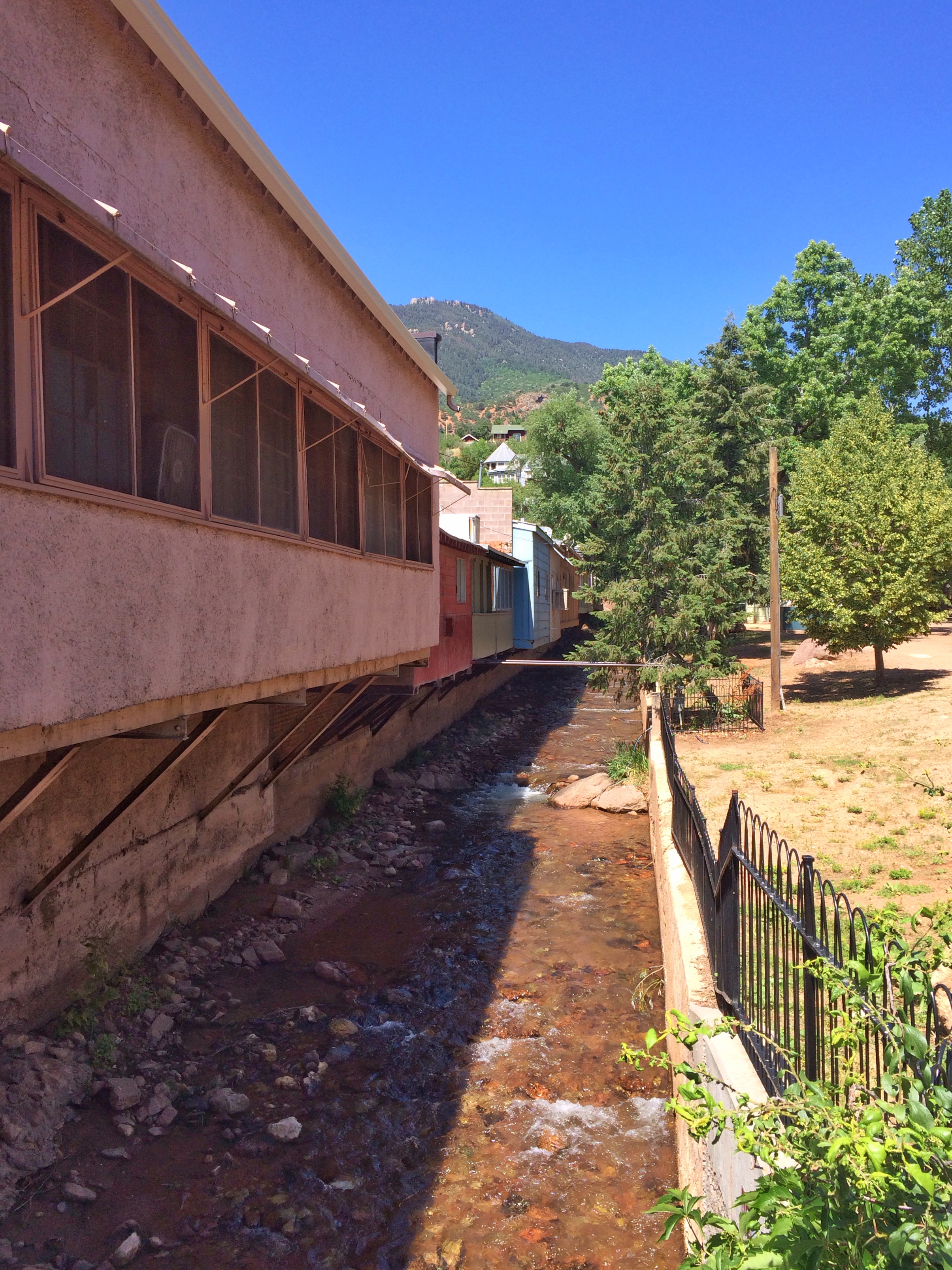 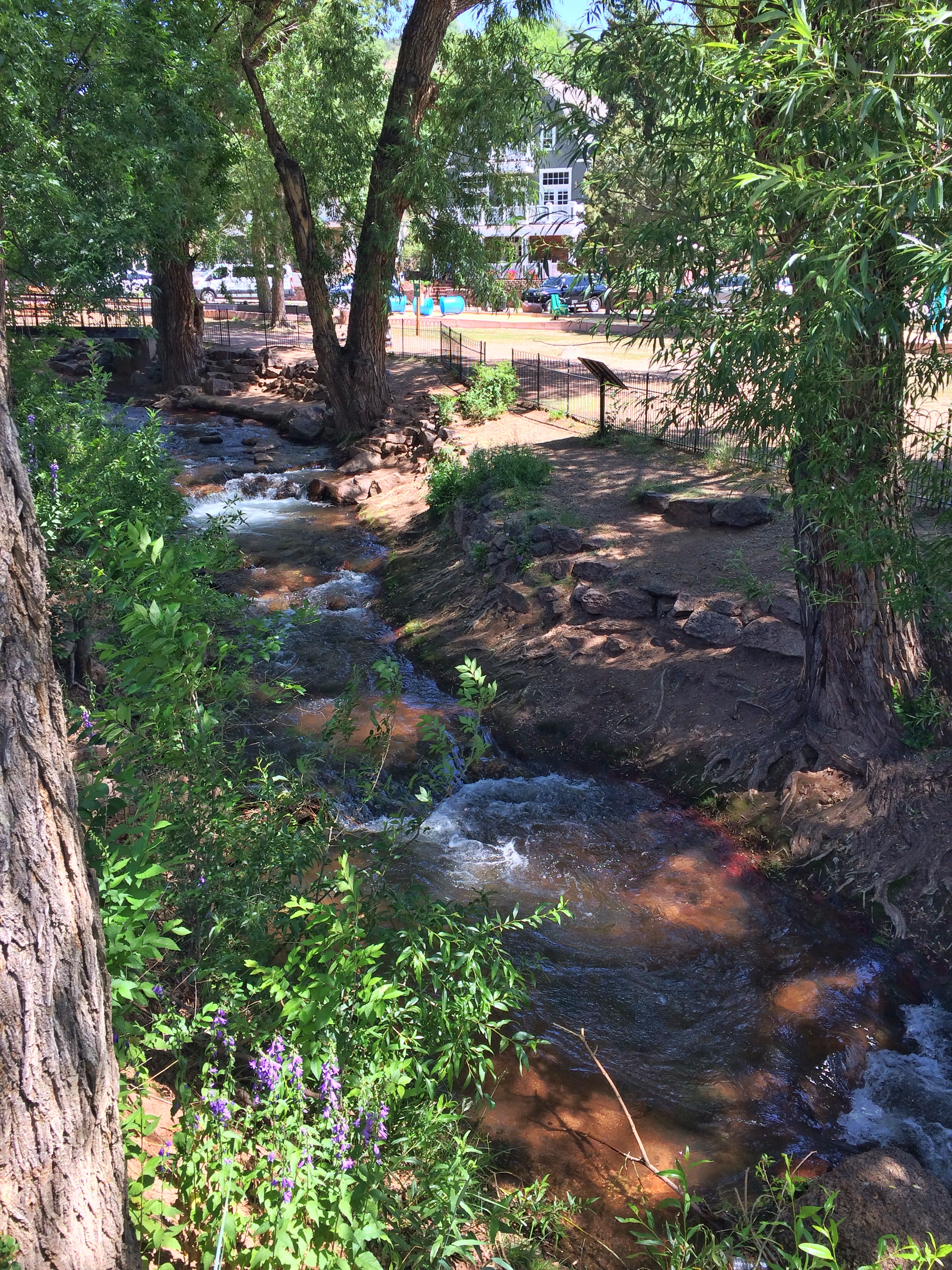 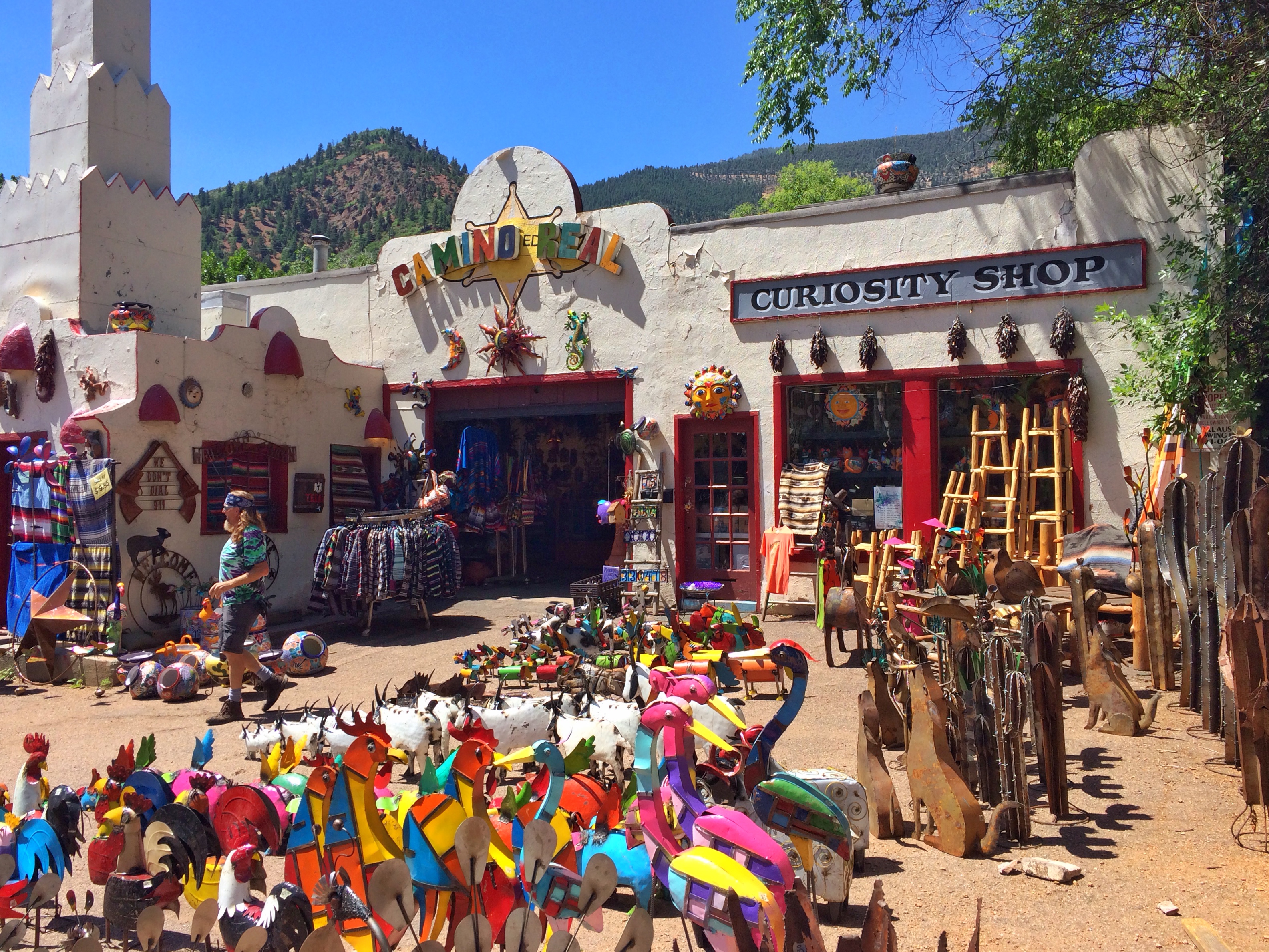 There are some charming things about the town. There are also shops operated by witches and shops dedicated to smoking pot. There must have been something about me that convinced store owners on sight that I wasn’t likely to buy anything. I got several unfriendly looks. One owner singled me out in a crowded store and asked in a surly voice if he could help me find anything. I said I was just browsing. He had me repeat it, then replied, “Right, just browsing.” He then stood and stared at me as I waited for my wife to finish browsing undisturbed. 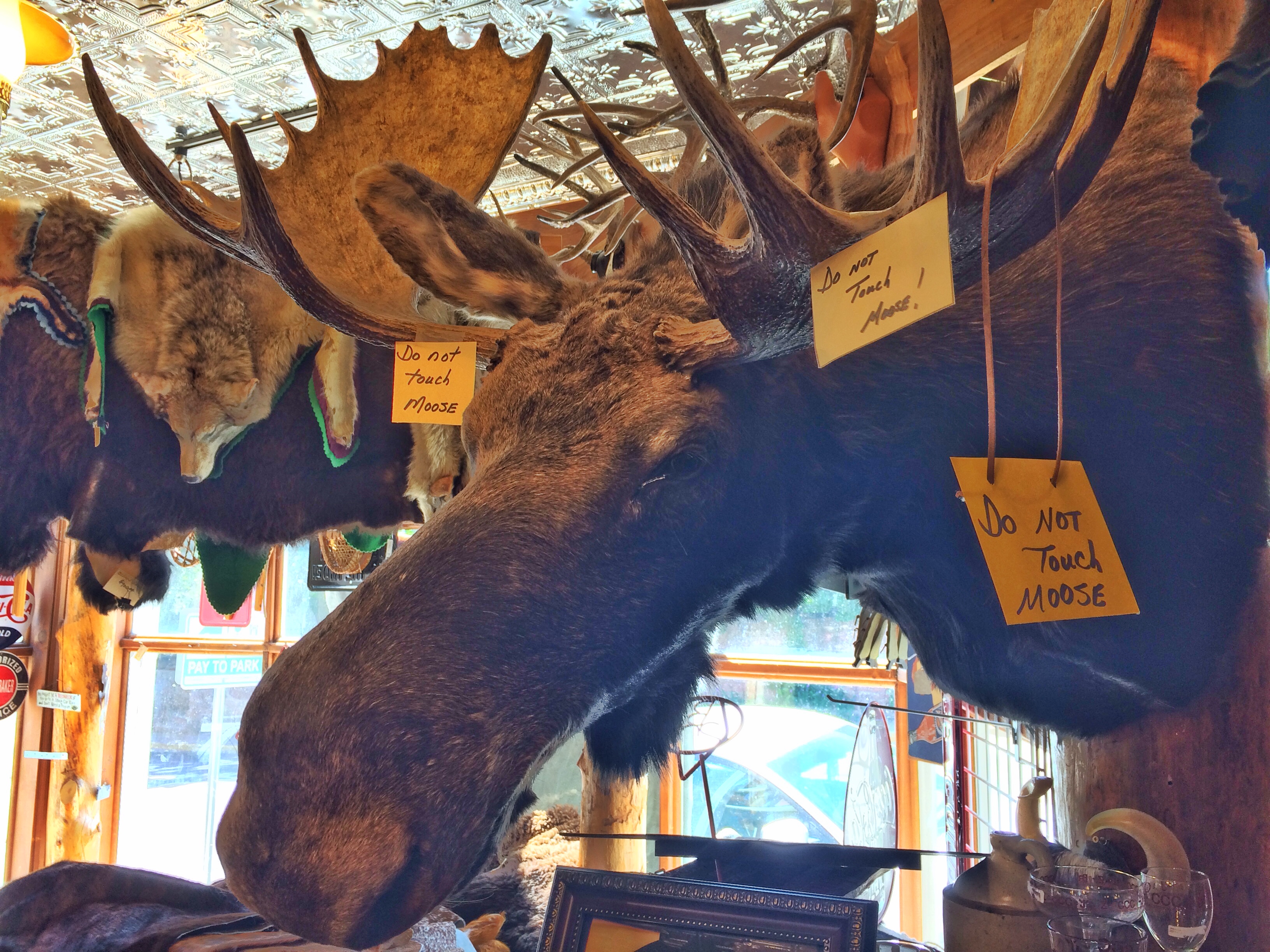 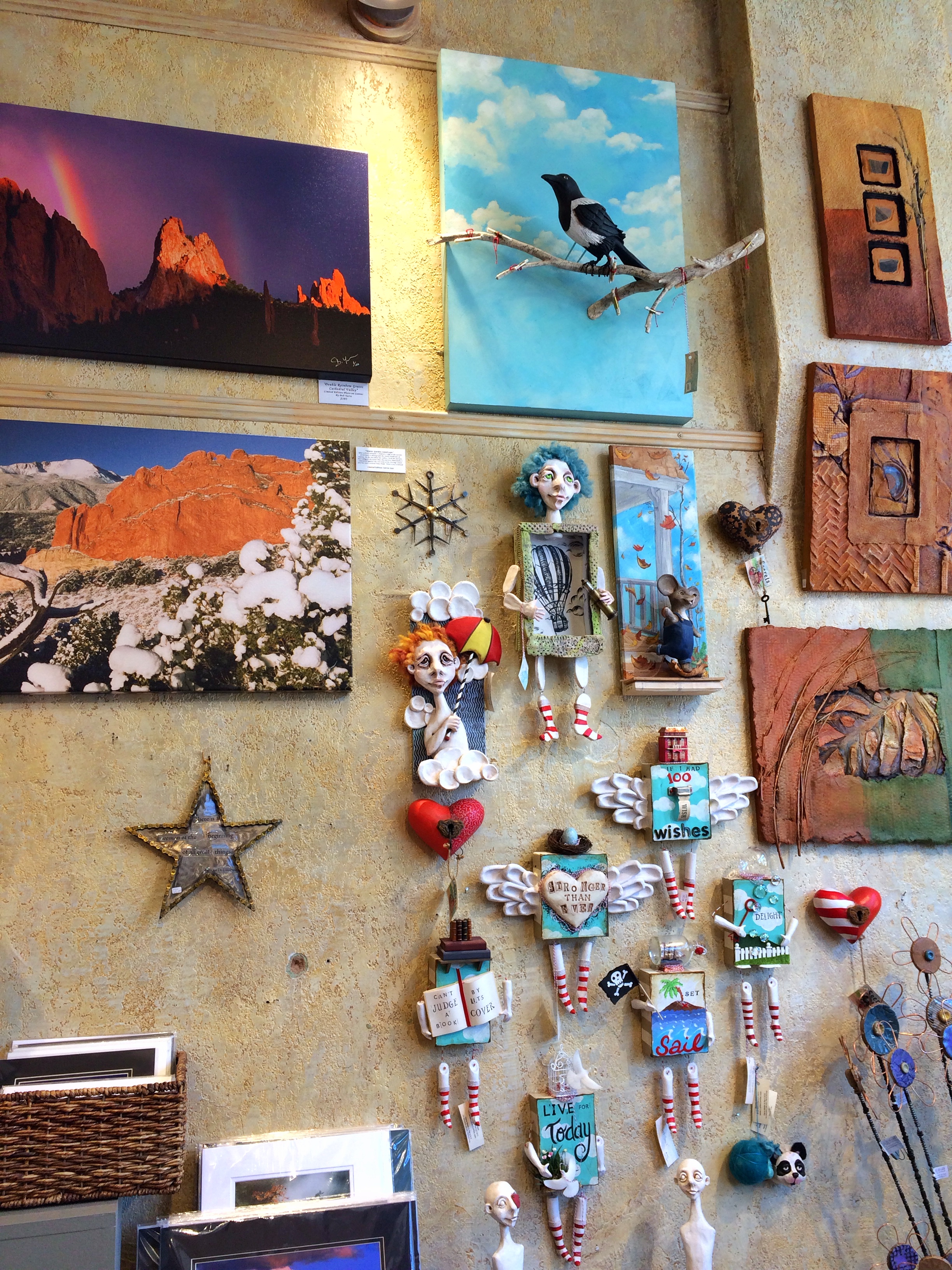 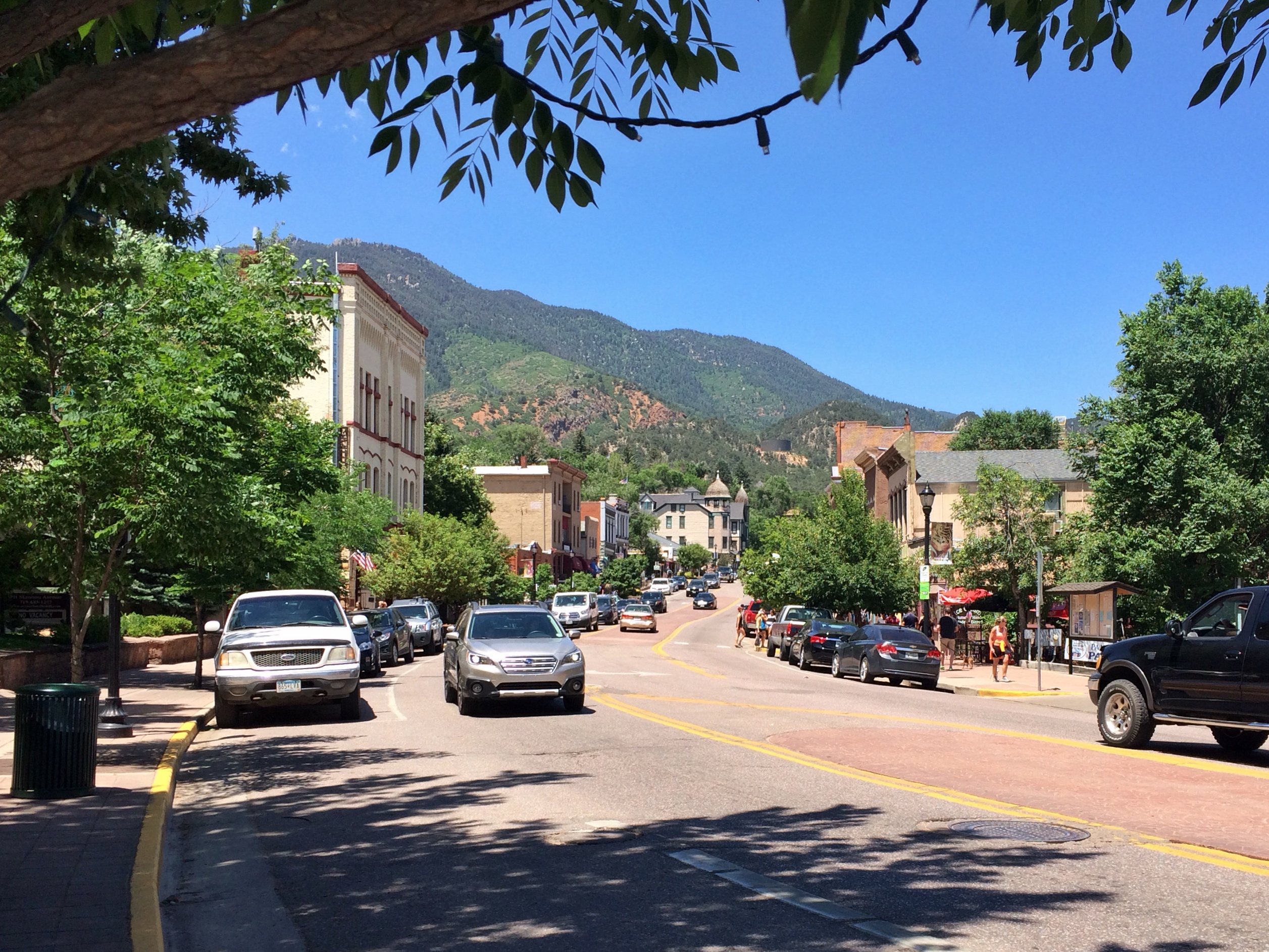 There were also springs. Here are three of them. Note the kitten in this next photo. There were two of them tethered to the cage. The young man in the background was playing the banjo and asking for money to support them. If he had asked for money for music lessons, I might have given him some. There are signs all over Manitou Springs telling tourists not to give money to panhandlers. 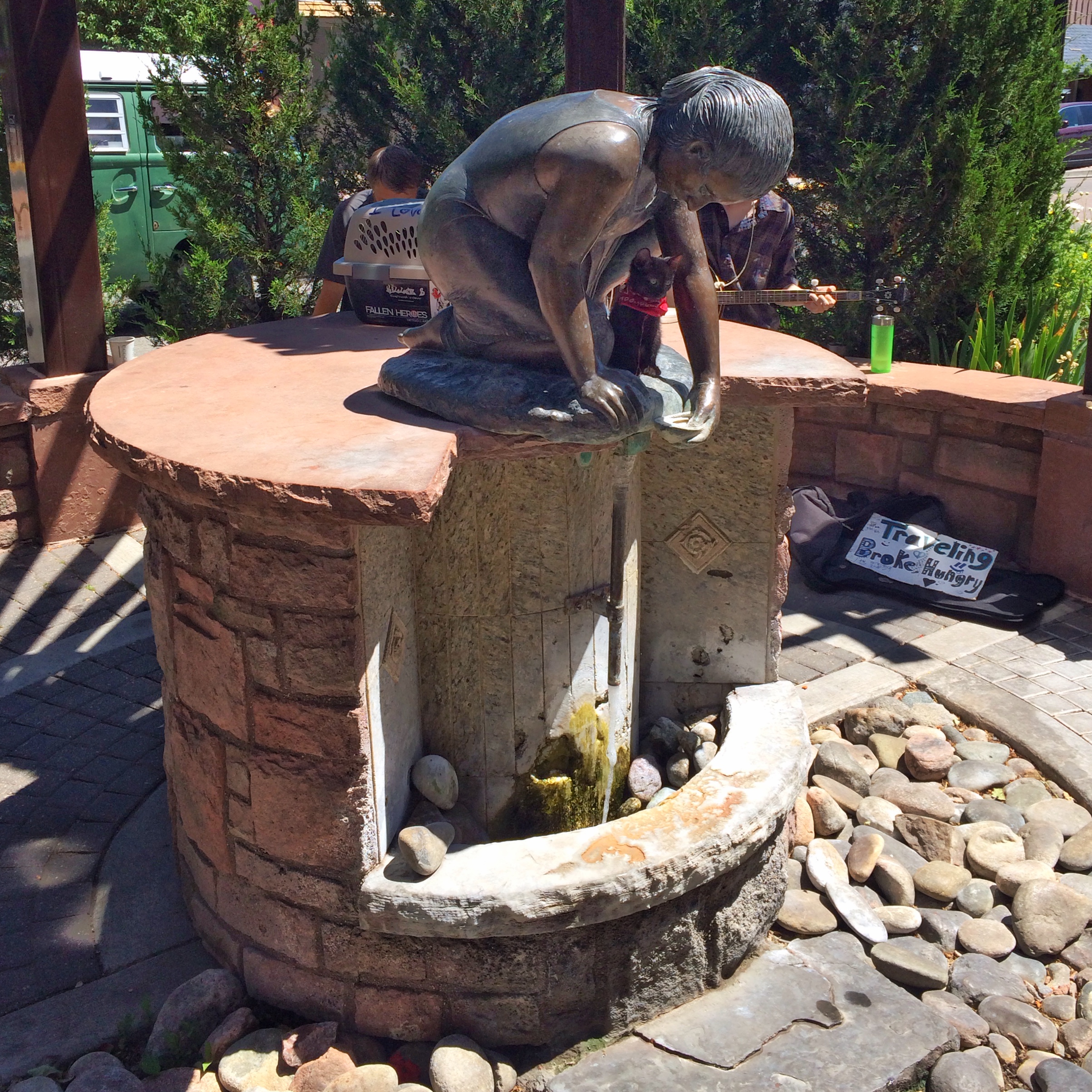 My wife is taking a sip from the spring/sculpture on the right. The round building behind her was a spring house from back when the local water was bottled. 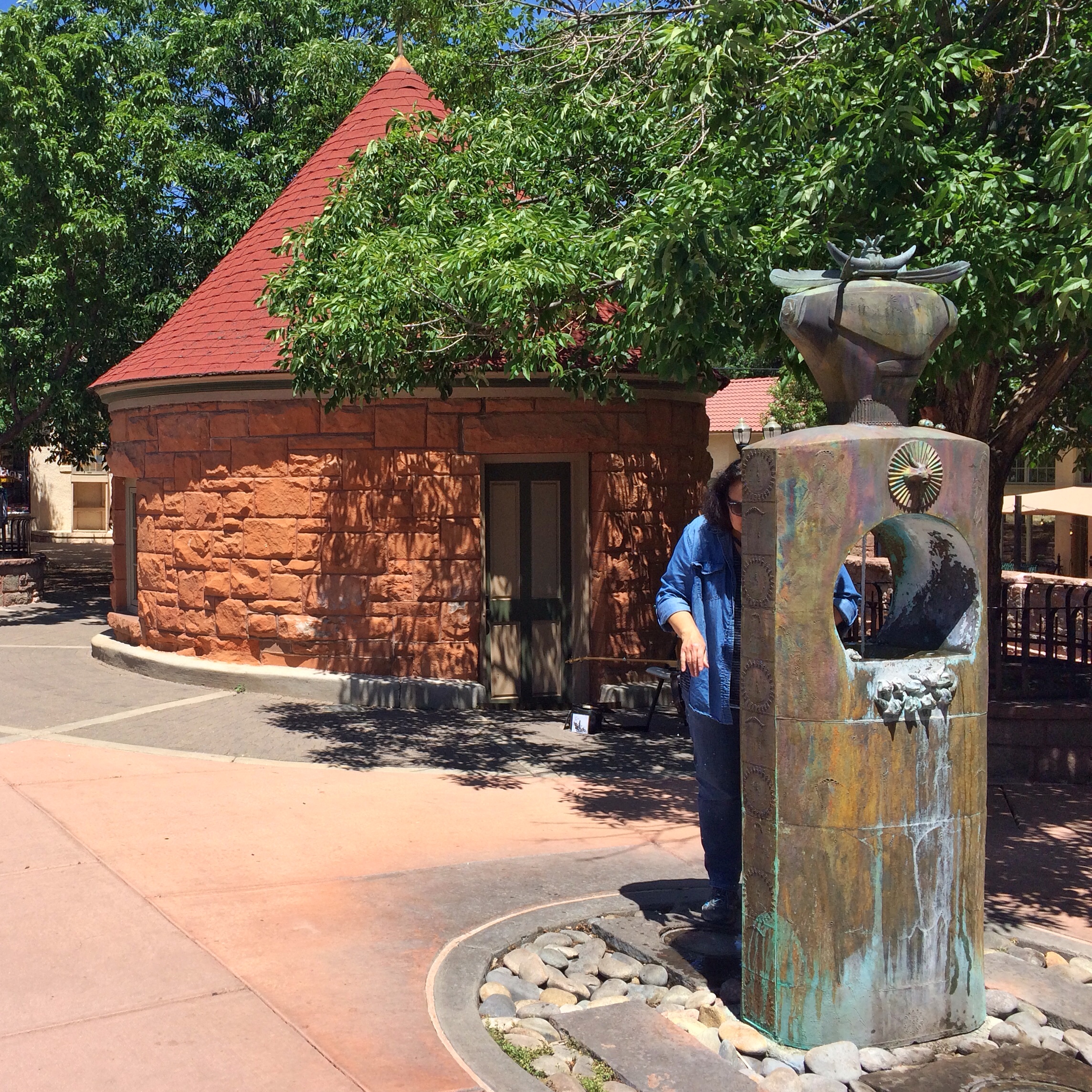 Navajo Spring was tucked under a roof on the back wall of Patsy’s Candy Shop next to Arcade Amusements (next post). 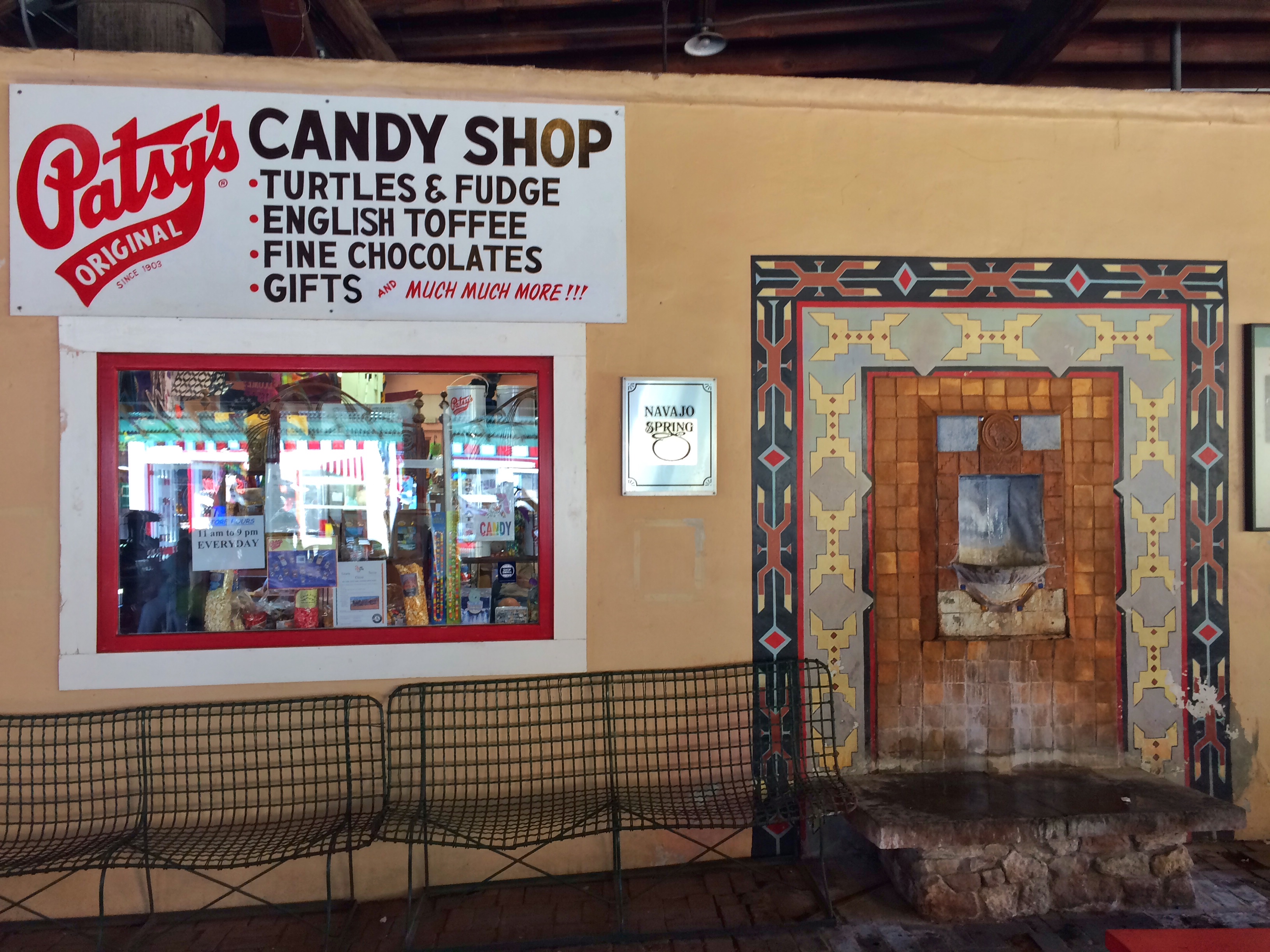 We bought two small soft-serve ice cream cones at Patsy’s. The guy working the counter asked for $9. The woman put our ice cream in sugar cones, at which point the guy informed us that the price was now $10.90. They were very expensive ice cream cones, and we’ll probably resist the urge to go there again. But to be fair, it was some of the best soft serve ice cream I’ve ever had. 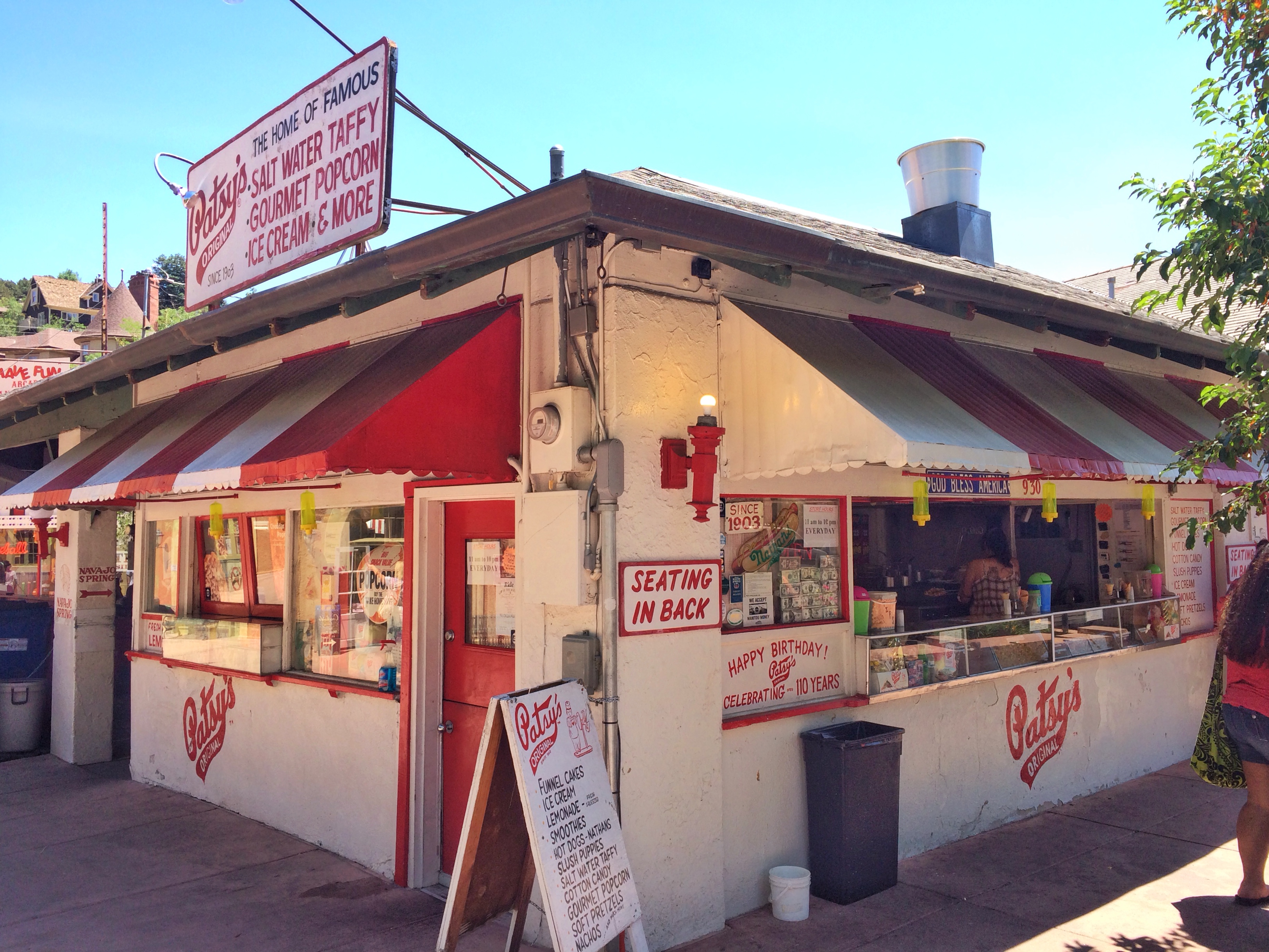