When we first moved to Colorado, I used to bird at Ramah Reservoir fairly often. It was the closest place to see shorebirds, and the grove of cottonwoods attracted a variety of birds. But after a couple years, the reservoir ran dry and there didn’t seem much point in going. I’ve heard rumors that the state is planning on turning it into a range for recreational shooters, so there goes that.

Yesterday was rainy and I stayed home. Today I wanted to go somewhere, but I didn’t want to drive far. Birders found a Yell0w-billed Cuckoo at Ramah a week or so ago. It would be a first for the year and the state, so I decided to head that way.

I had the place to myself. (In fact, during the two or three hours I was there, I only saw one other person, a guy walking his dog along the road, and he was a long way off.) I saw a Mule Deer doe, and later, while walking through some tall grass, a fawn leaped up from right at my feet and gave me a huge startlement.

I wandered through the cottonwoods for about 20 minutes before I heard the cuckoo. I played it’s song once, and it immediately flew to a nearby tree and called repeatedly. Over the next 10 minutes, it flew to three other perches and kept calling. I imagine it was calling for a mate, but since it was way out of its normal range, its chances are slim. I actually felt bad for giving it false hope. For the next half hour, while I was in ear range, I continued to hear it calling from time to time. My experience with cuckoos is that they can be hard to find. But this one certainly wasn’t. 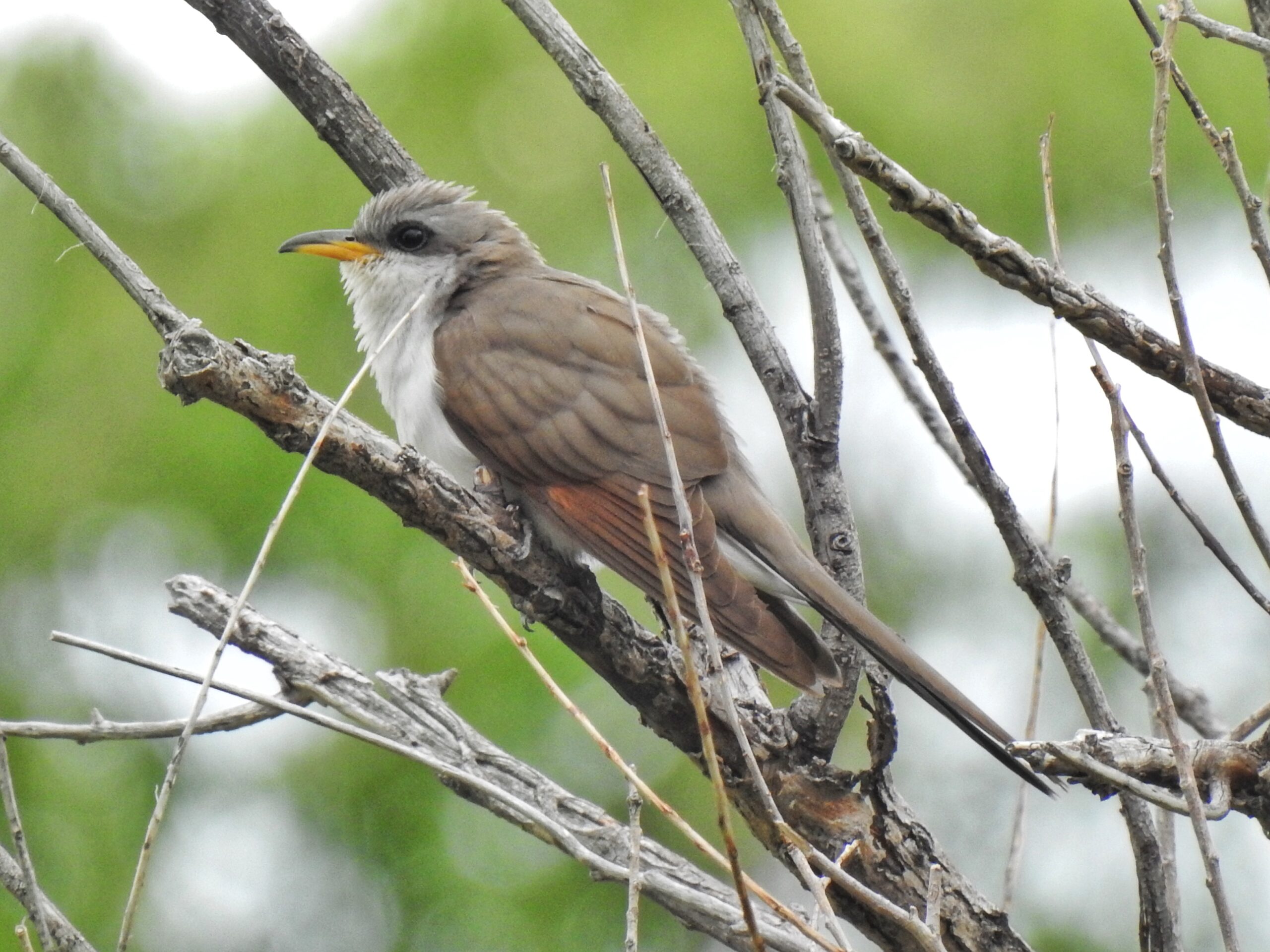 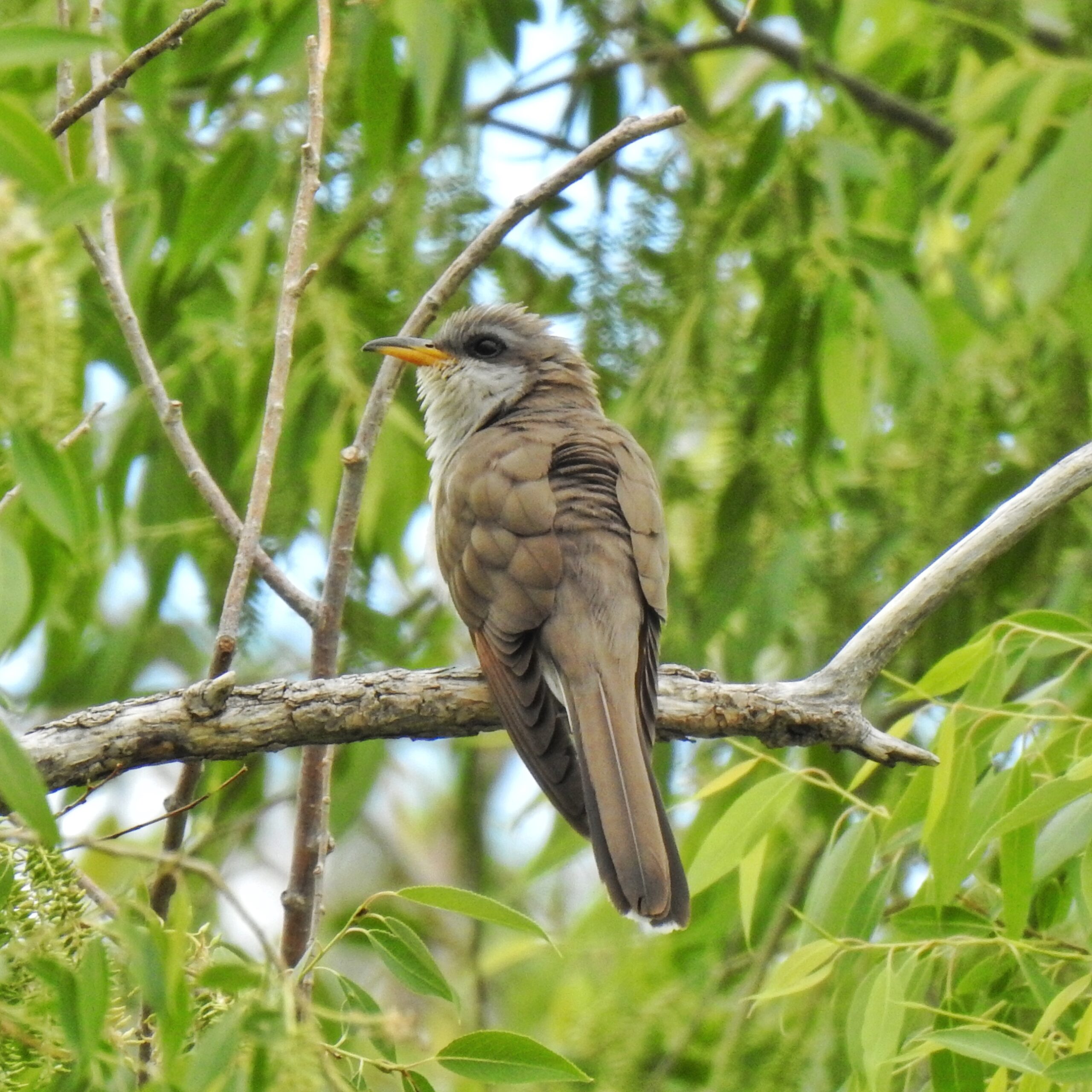 I took my time strolling back to my car, enjoying the cool morning air and the solitude. I heard and then saw, my first Colorado Dickcissel. He was a long way off—I’m surprised my photos turned out this well. I tried to get closer, but he flew a long way out into the prairie. 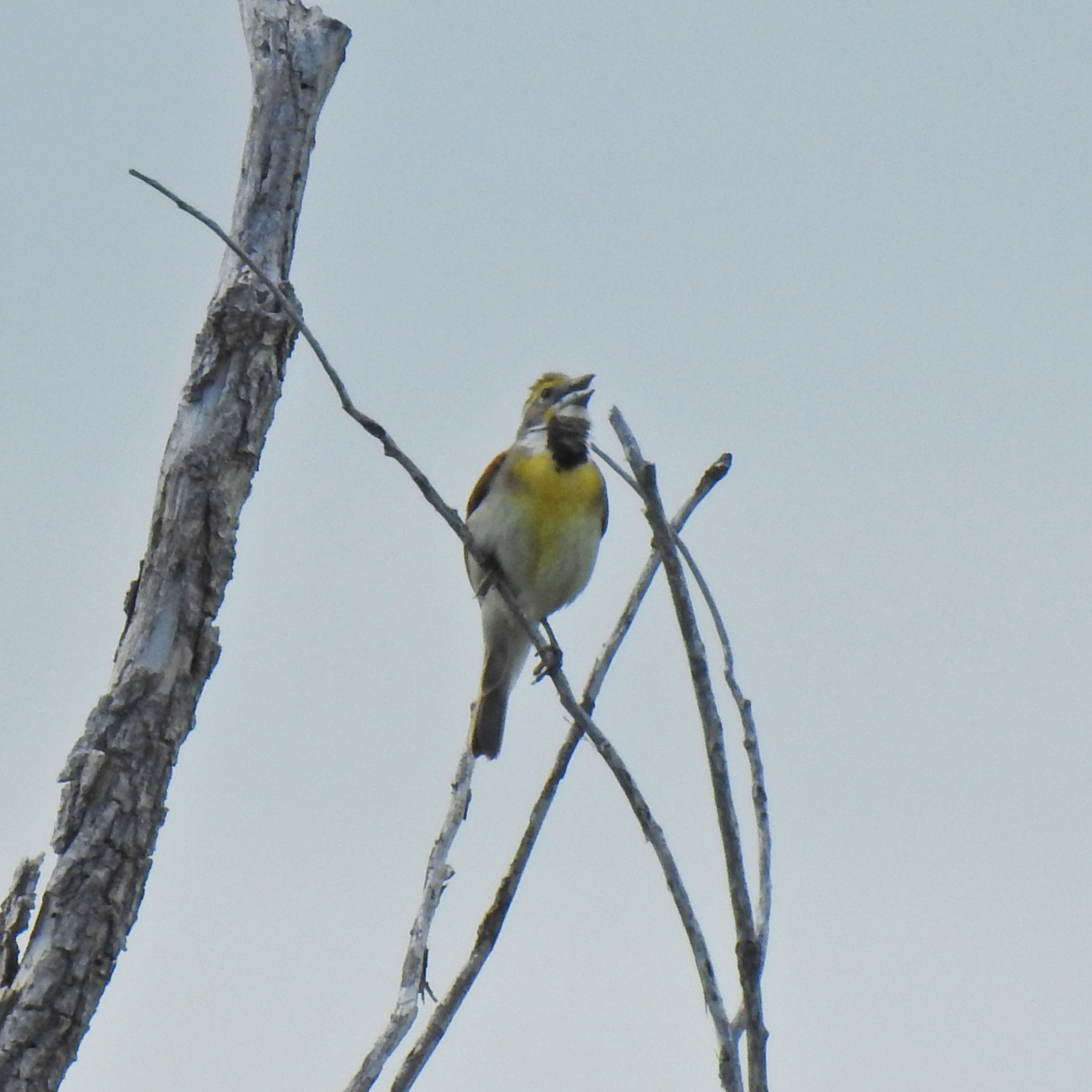 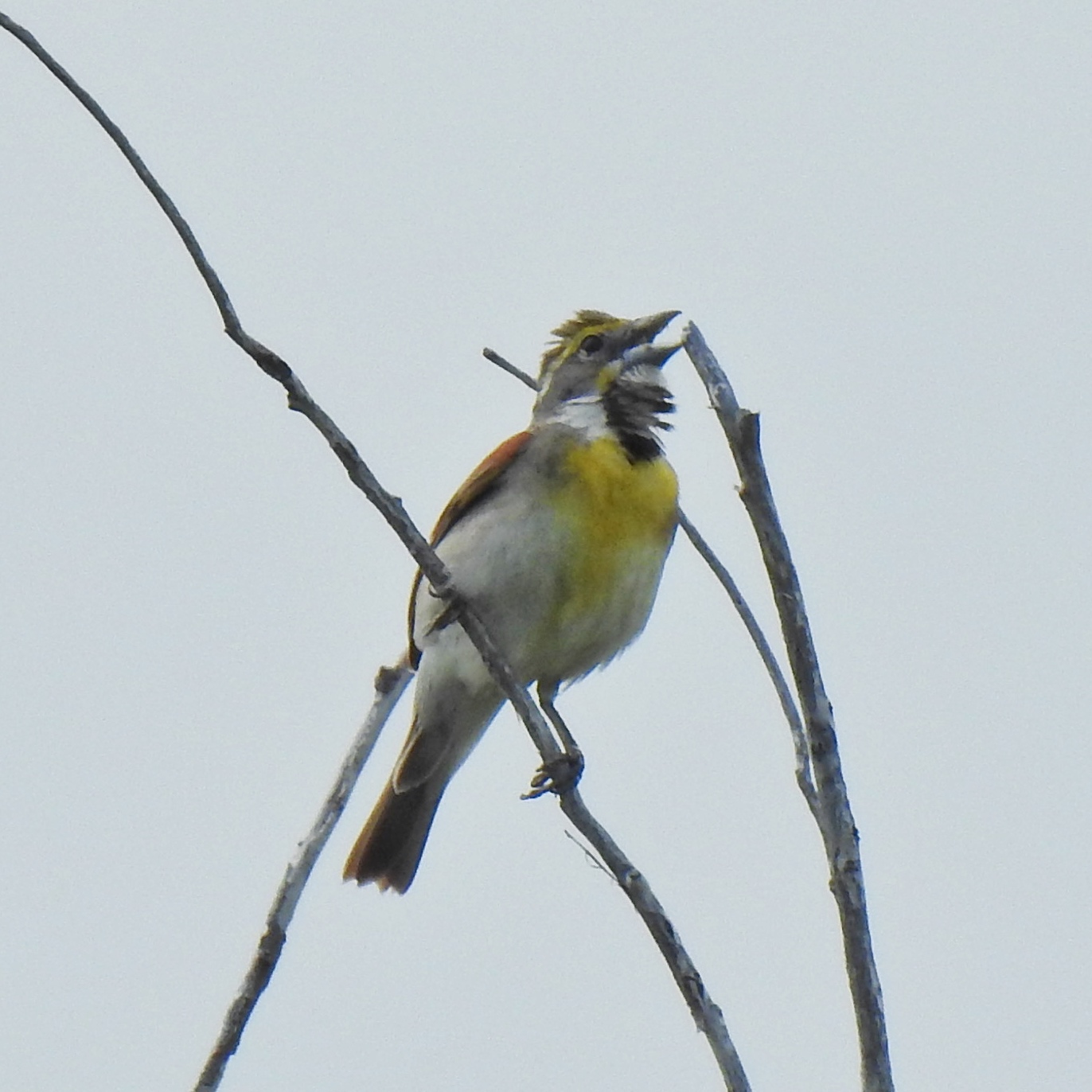 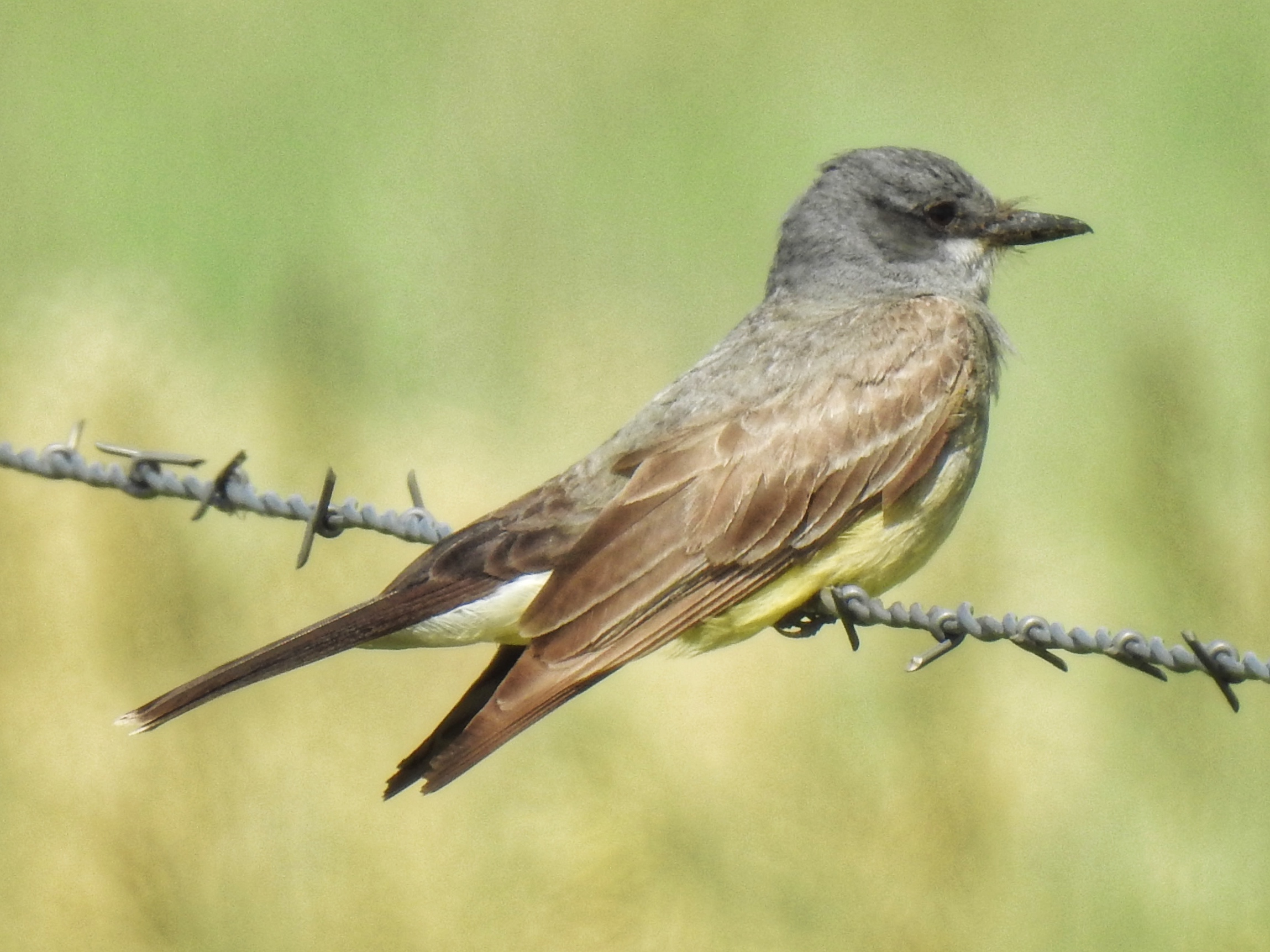 I spotted a Loggerhead Shrike in a bush with two almost-fully-grown young. Later, I parked my car near a fencepost where it stopped on its repeated forays into the prairie for insects. It would land on the post for a minute or so, then fly just above the grass. When it reached its goal, it would fly up and flutter in one place like a dragonfly, then drop down into the grass. On a couple of occasions, it stopped on the fence on its way back to its young. Once it had what looked like a giant ant in its bill. Another time it had a small grasshopper-looking bug that it ate itself. 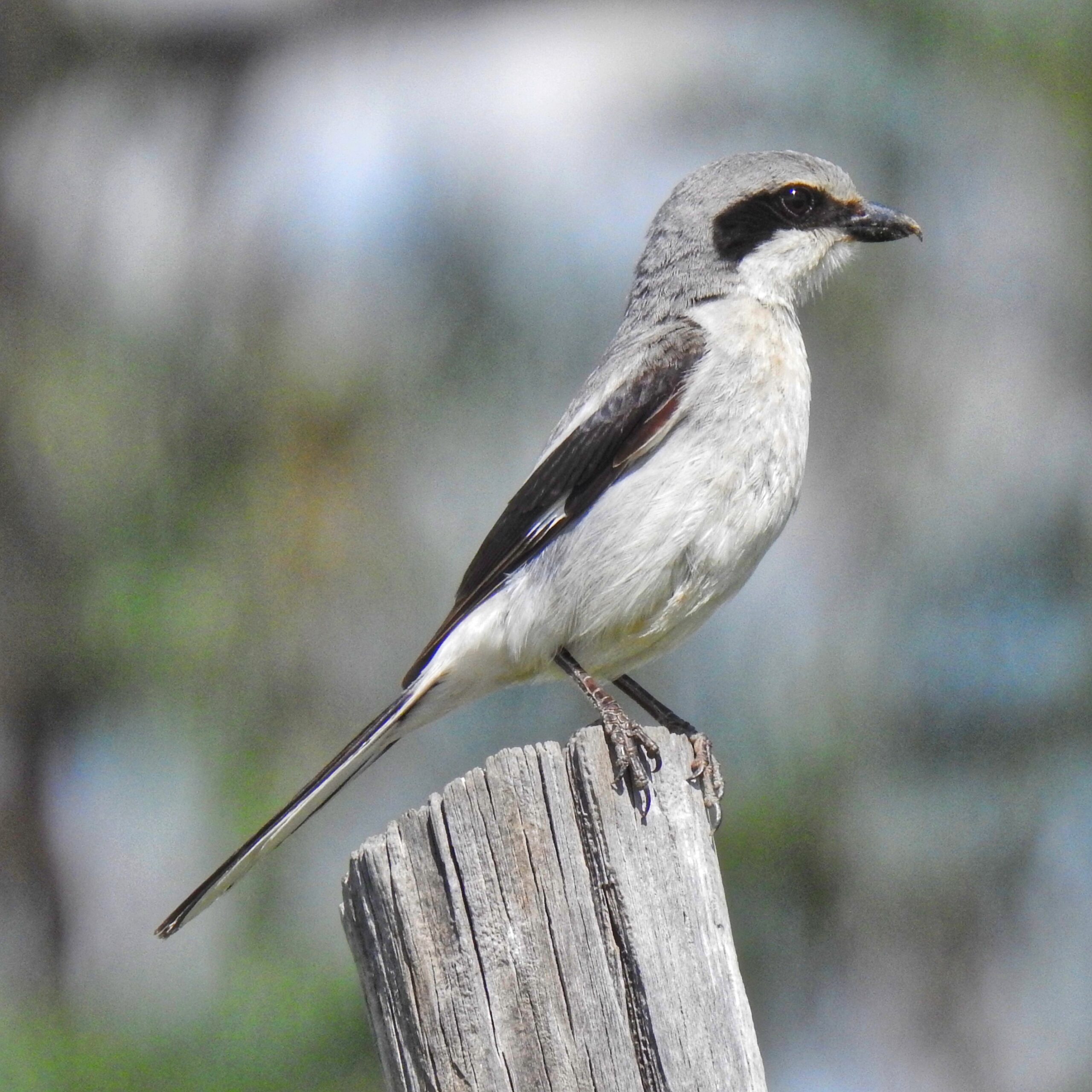 The day was young, the weather was beautiful, and I was in the mood for more adventure. I decided to stop off at Paint Mines park, where I haven’t been in a couple years. A lot of other people had the same idea. When I was here before, it occurred to me the place may not be around for long because of all the people scrambling on the formations. But now El Paso County has two people stationed there to answer questions and prevent people from destroying the place. I didn’t stay very long, just long enough to walk down into the canyon, take some photos, and hike back out. 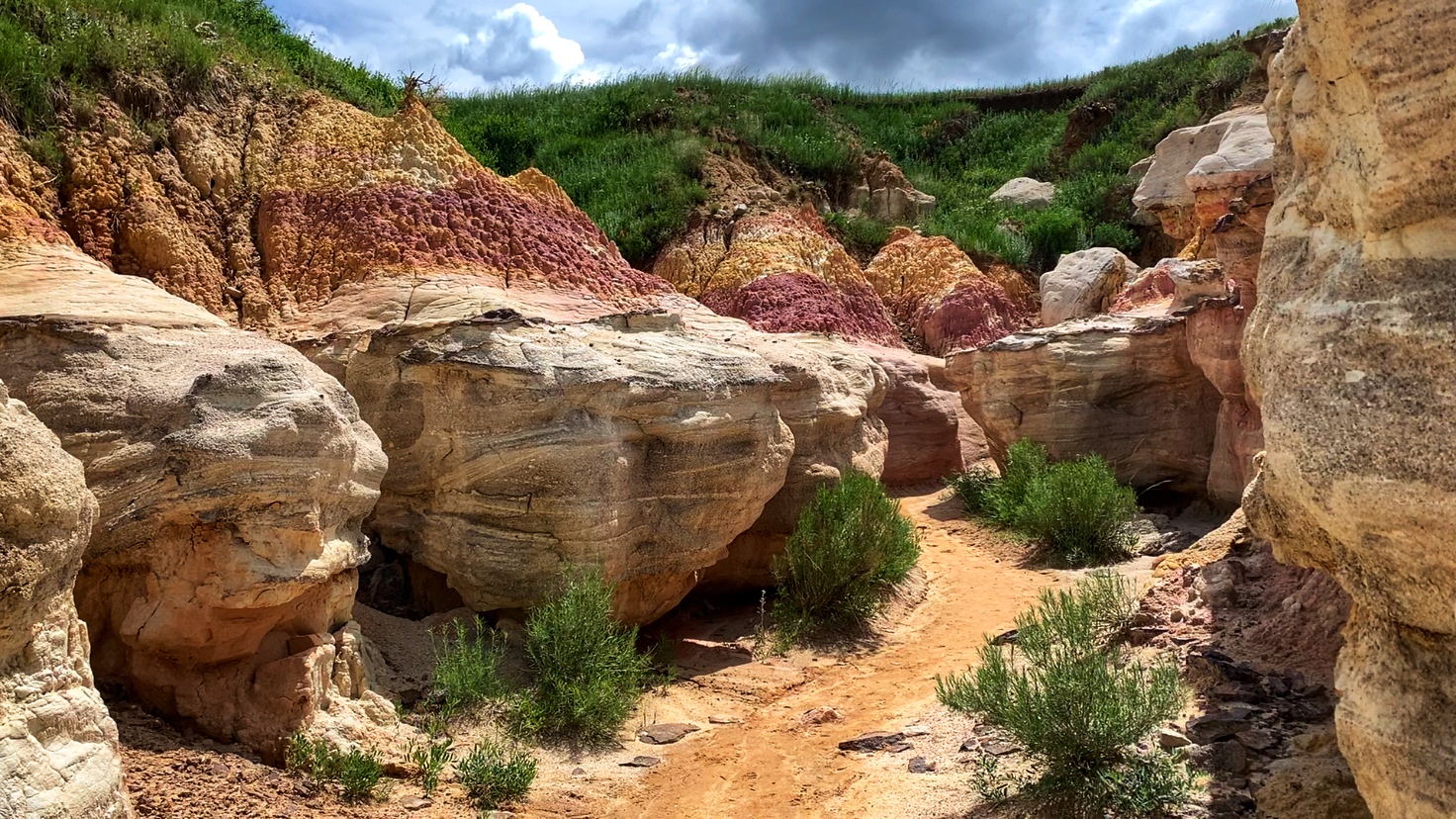 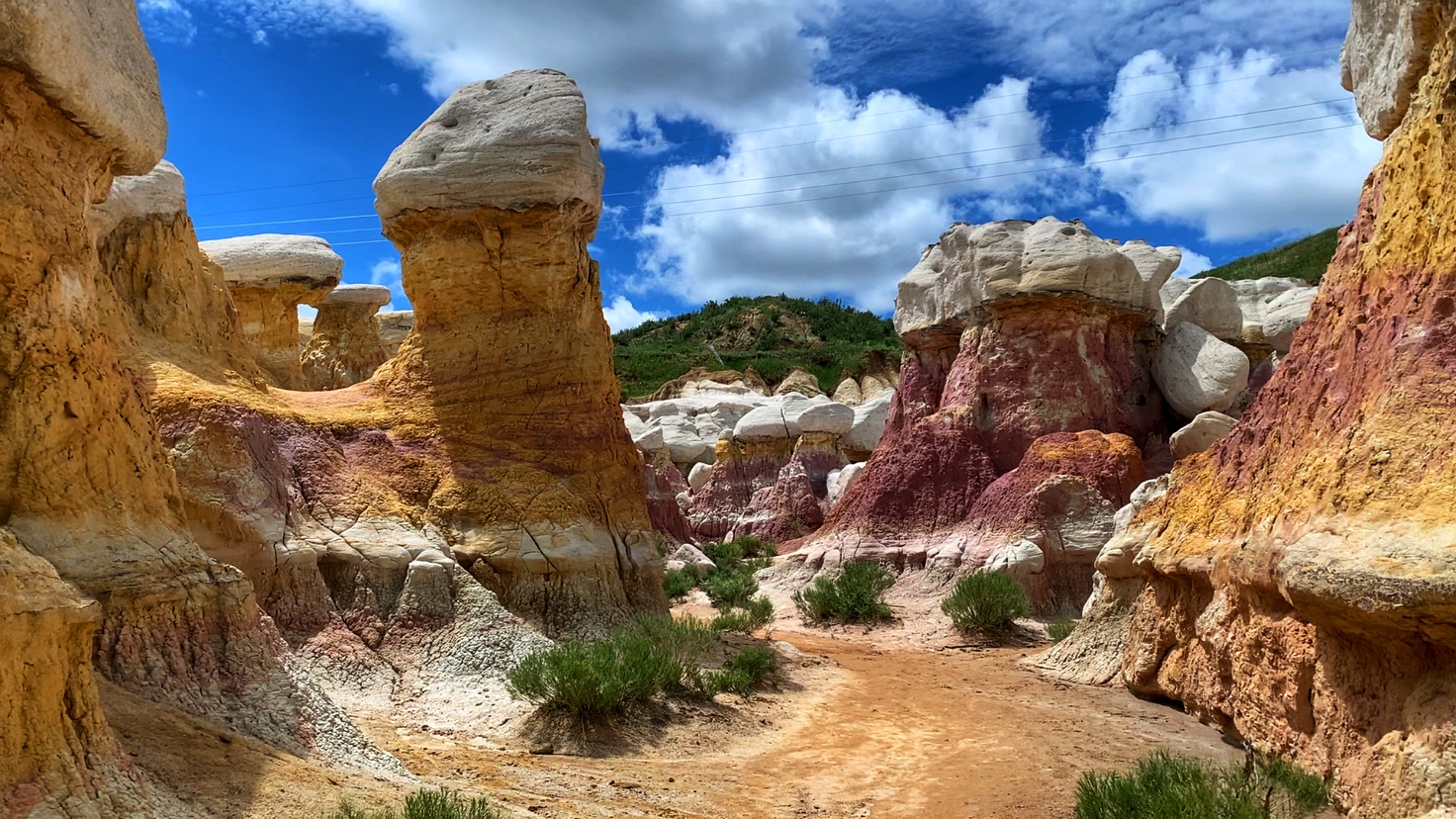 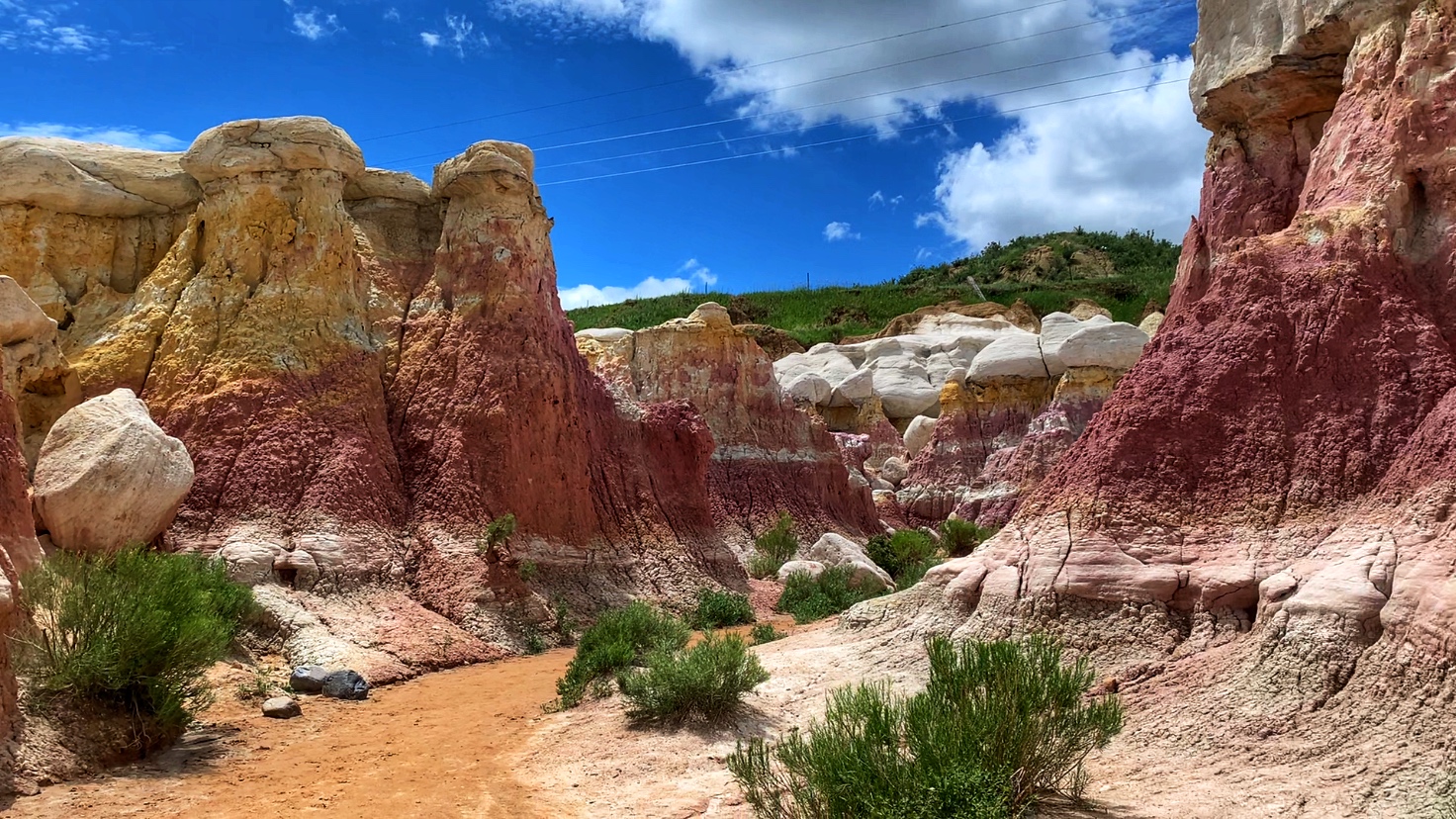 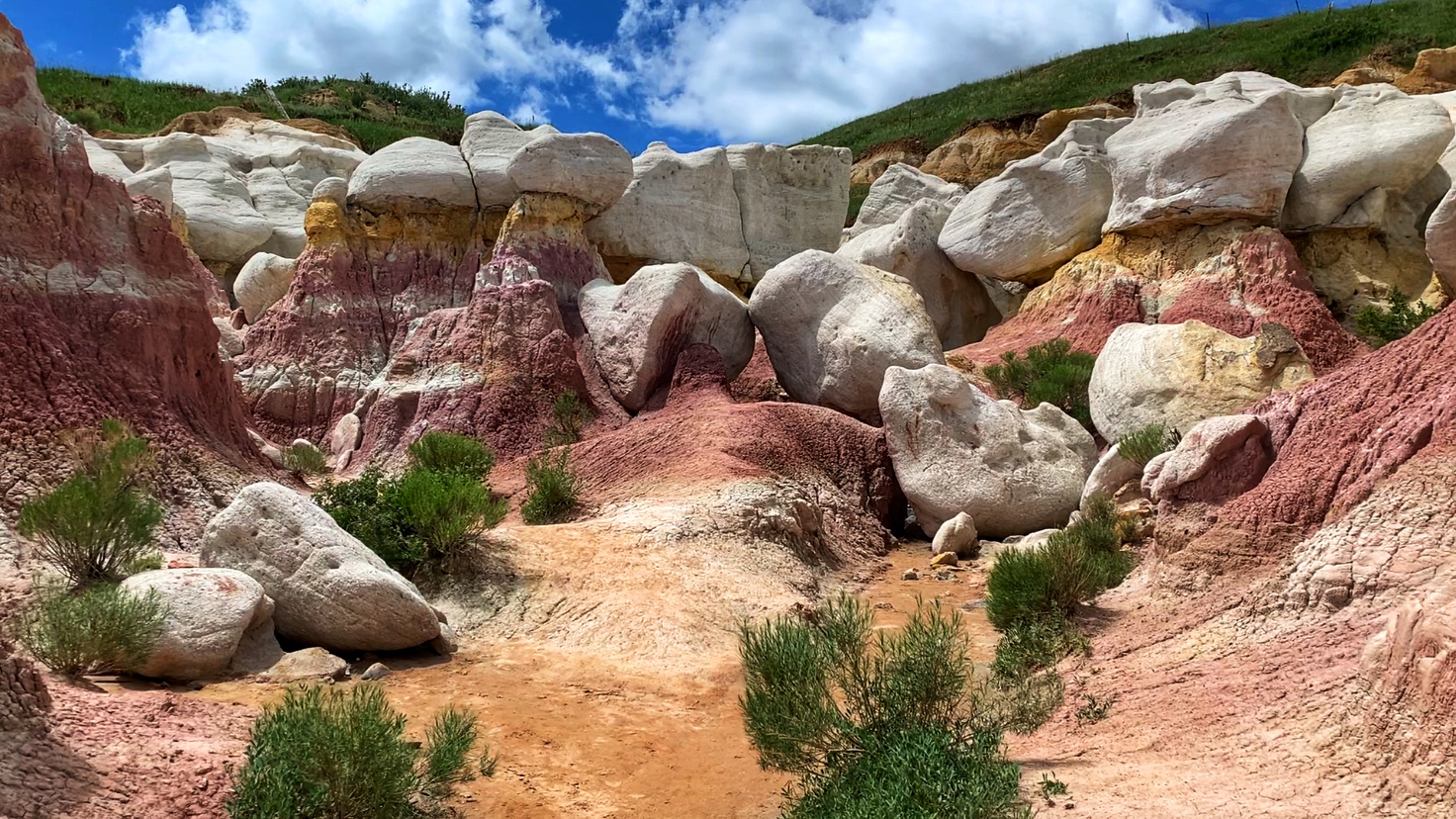 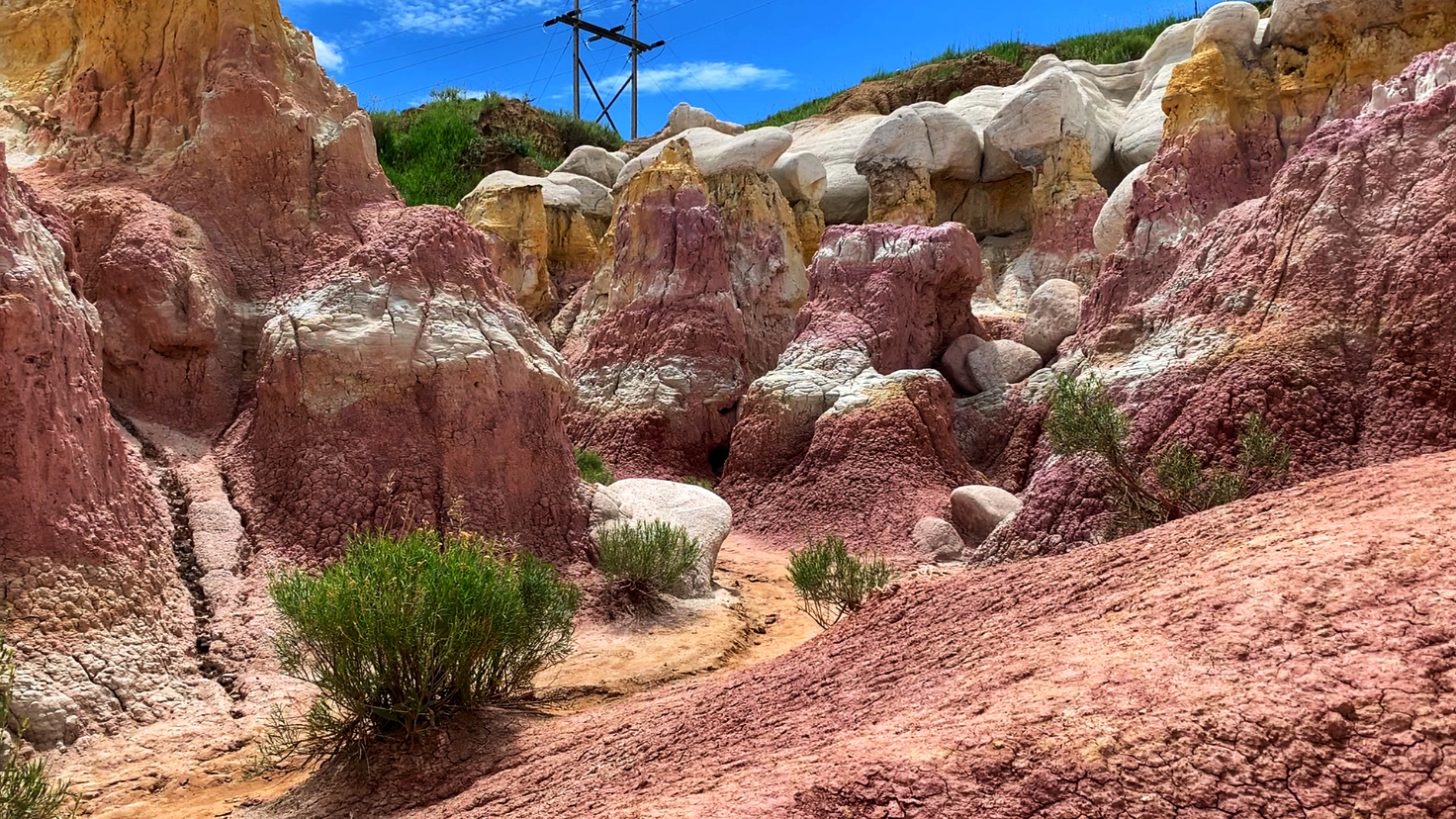 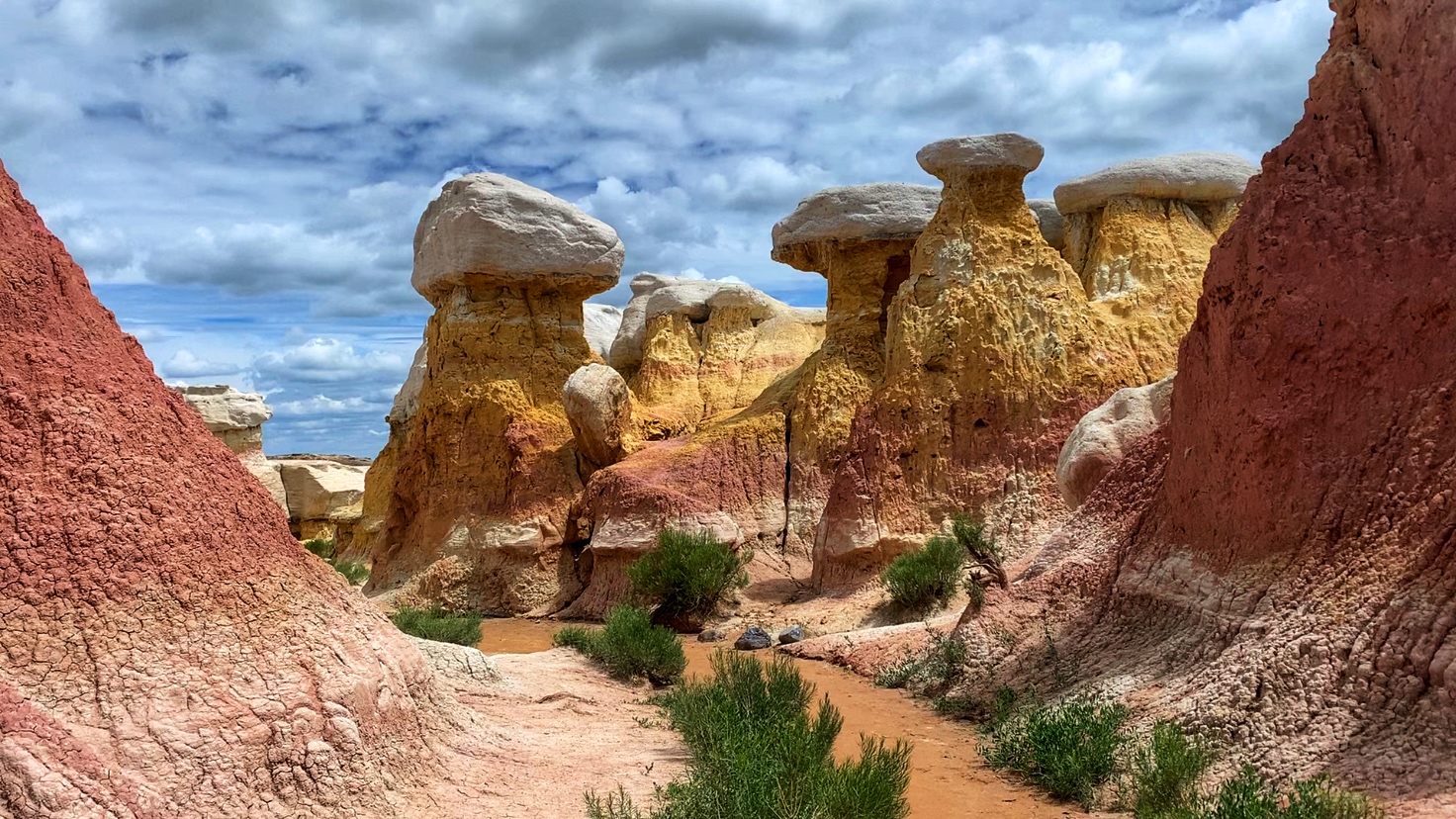 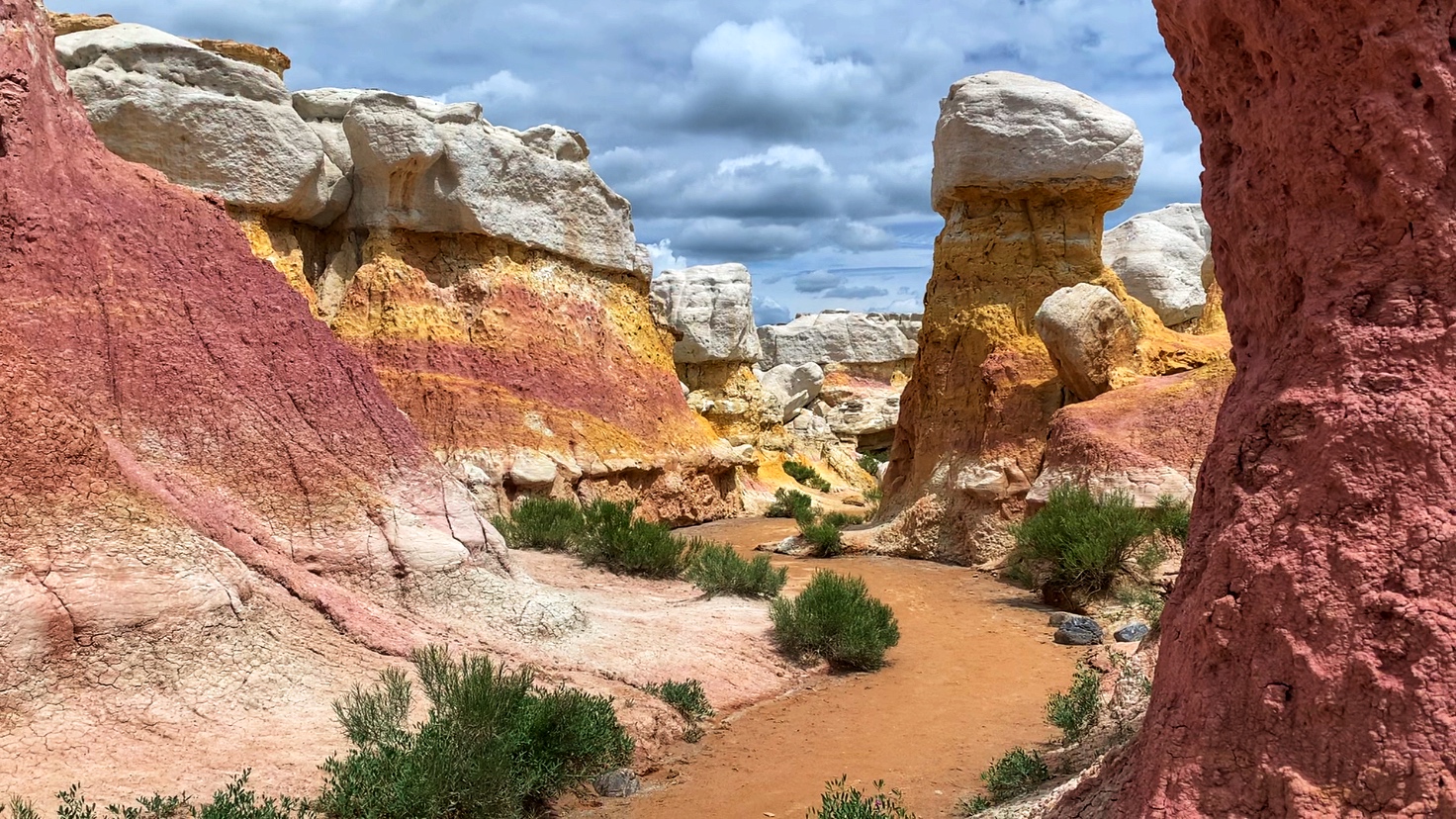 In my opinion, the state has done a lot to ruin the place by allowing wind turbines in the surrounding prairie, greatly destroying the views.

I’m sticking this here because I don’t want to make it a separate post. On Saturday, I found this little butterfly at Mary Kyer Park in Colorado Springs. I’m pretty sure it’s a Banded Hairstreak, an eastern butterfly with a small population on the front range in Colorado. 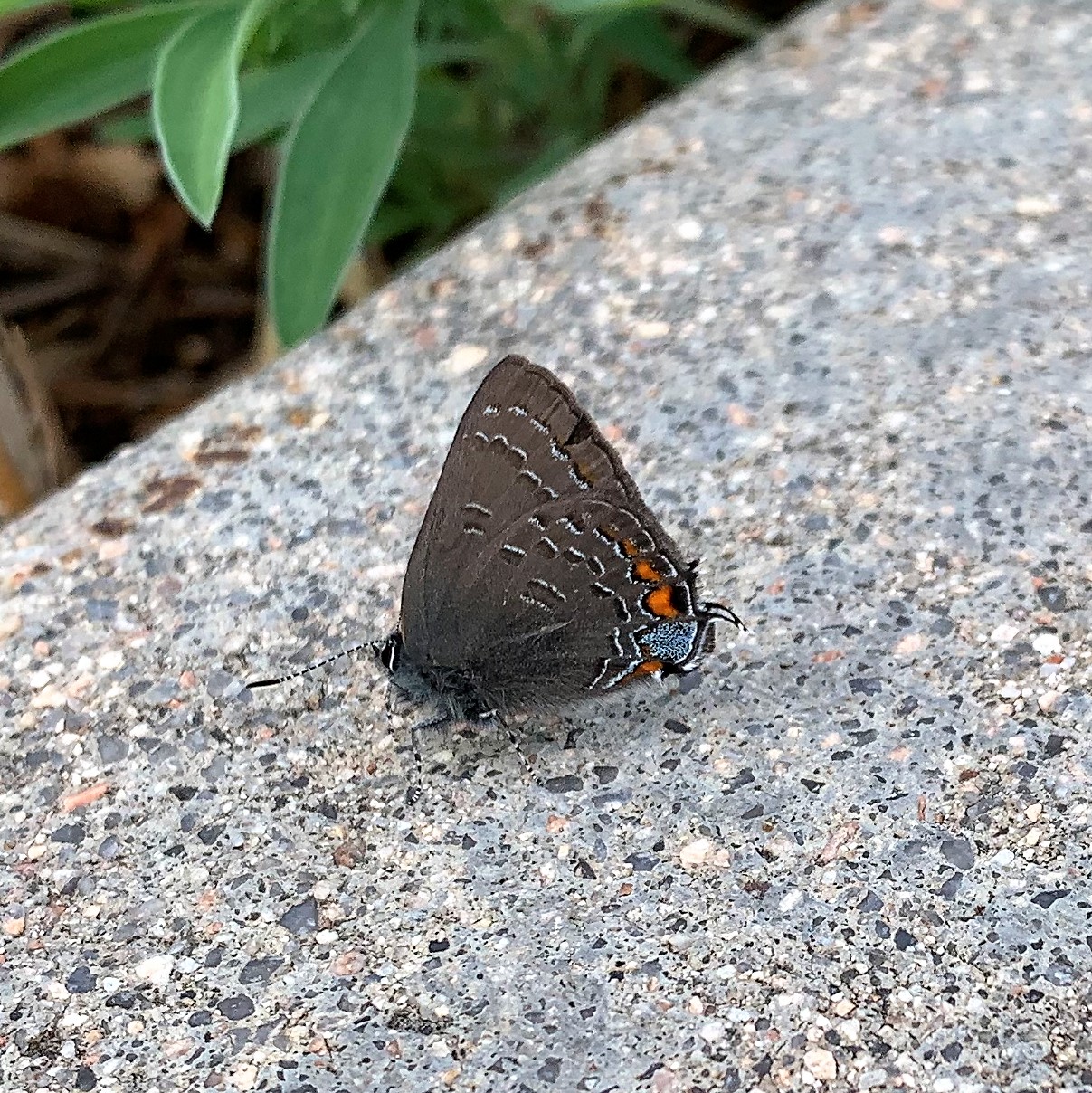