Huey Lewis I knew about, and could even name several of his songs. Joe Cocker, not so much. For much of the past several months, from the time when we bought the tickets until just a few days before Friday’s concert at Ravina, I thought we were going to see Phil Collins.

Anyway, I met my wife at the Ravinia station — which looks old and quaint, which it is, and out in the country, which it isn’t — at 4:20. She’d spent the day in Chicago listening to long-hair music. 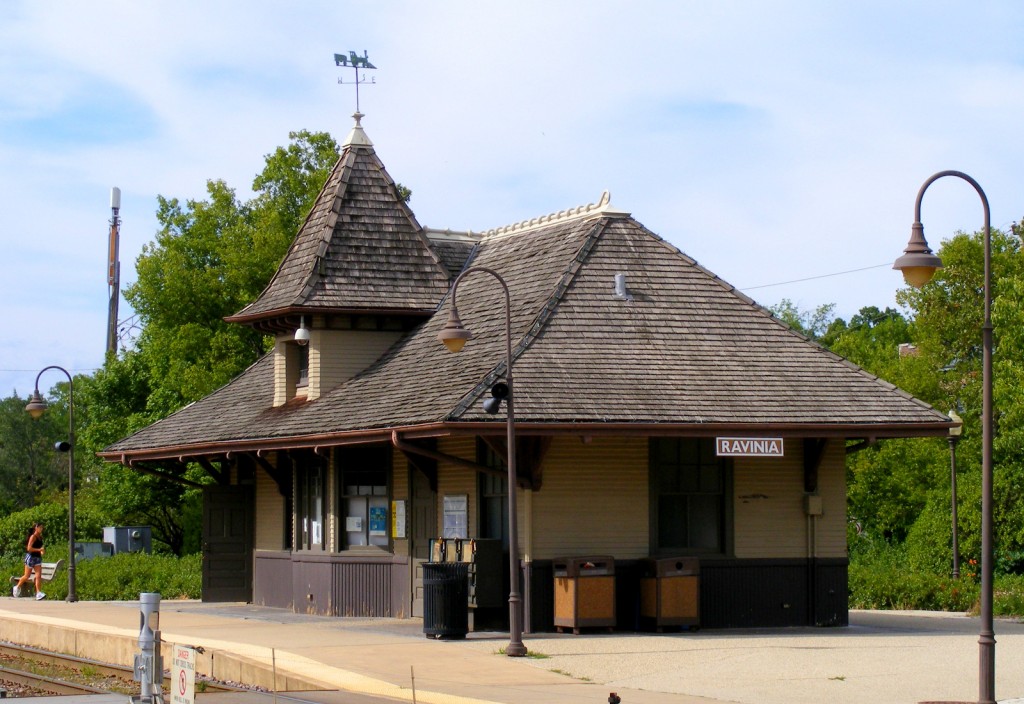 We ran into our friends in the parking lot (it wasn’t as bad as it sounds) and rode with them to the park on the world’s shortest shuttle bus ride. Seriously, it couldn’t have been longer than 500 yards from the bus stop to the drop-off. It was a longer walk from the drop-off to the spot in the middle of the picnic area where we found our other friends.

We had two-and-a-half hours until the start of the concert, so we sat around and chatted and ate cheese and grapes and cookies. I wandered to look at some of the “art.” 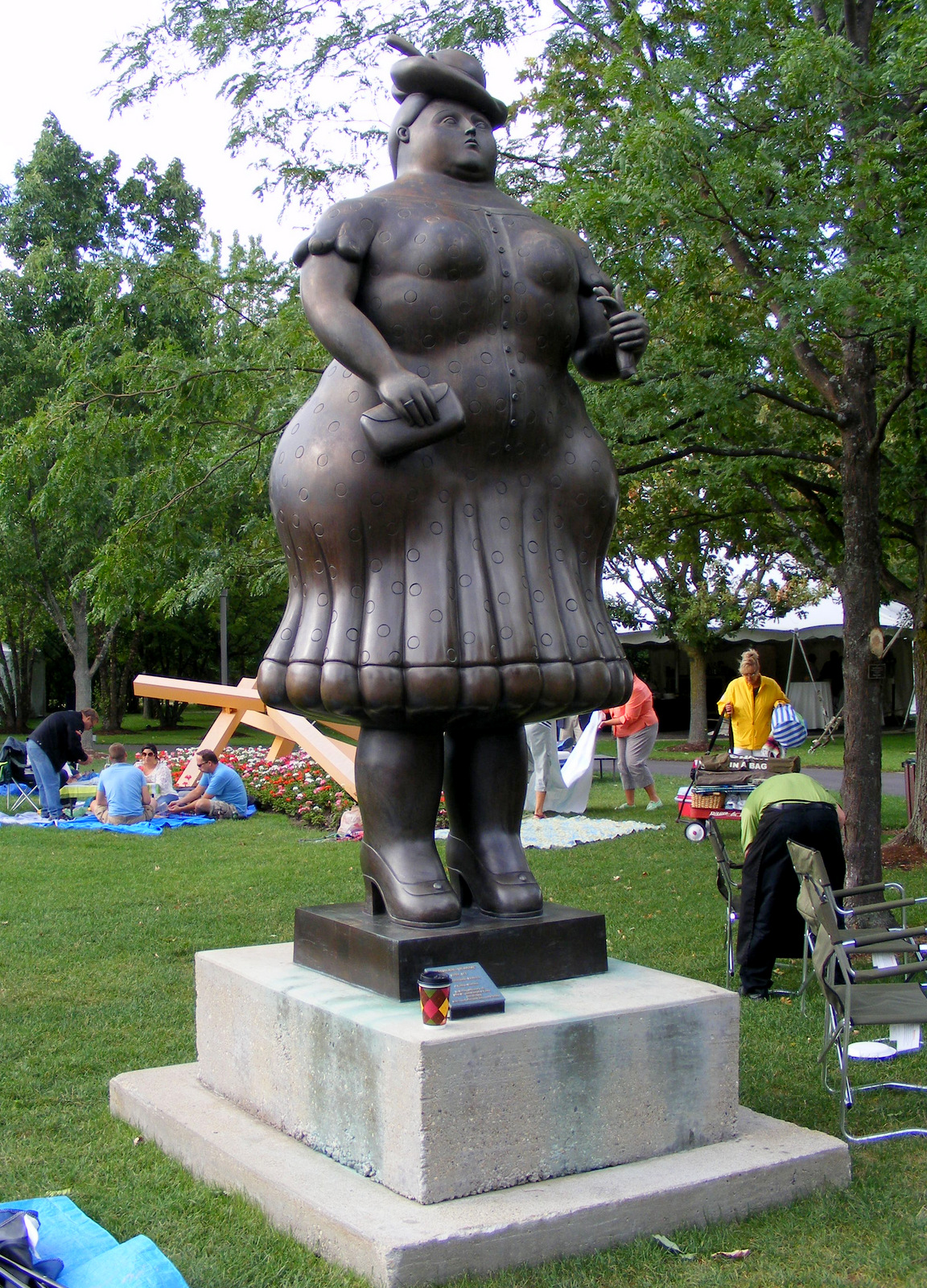 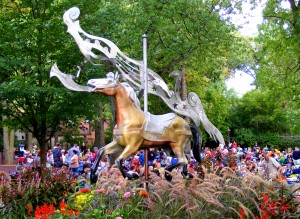 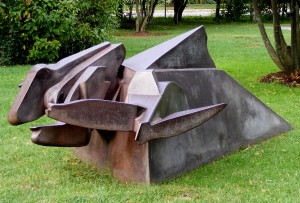 The place kept filling up. My sister had tried to get a ticket, but they were sold out. At what point they decide they can’t fit one more person onto the grounds, I don’t know — it was WAY crowded, but we certainly could have squeezed in another person or two. I suspect it might have something to do with laws about person-per-bathroom capacity or somesuch. In order to get to the bathroom or anywhere else, you had to wend your way through a maze of picnic groups, many of whom brought their entire dining room sets, complete with chandeliers. 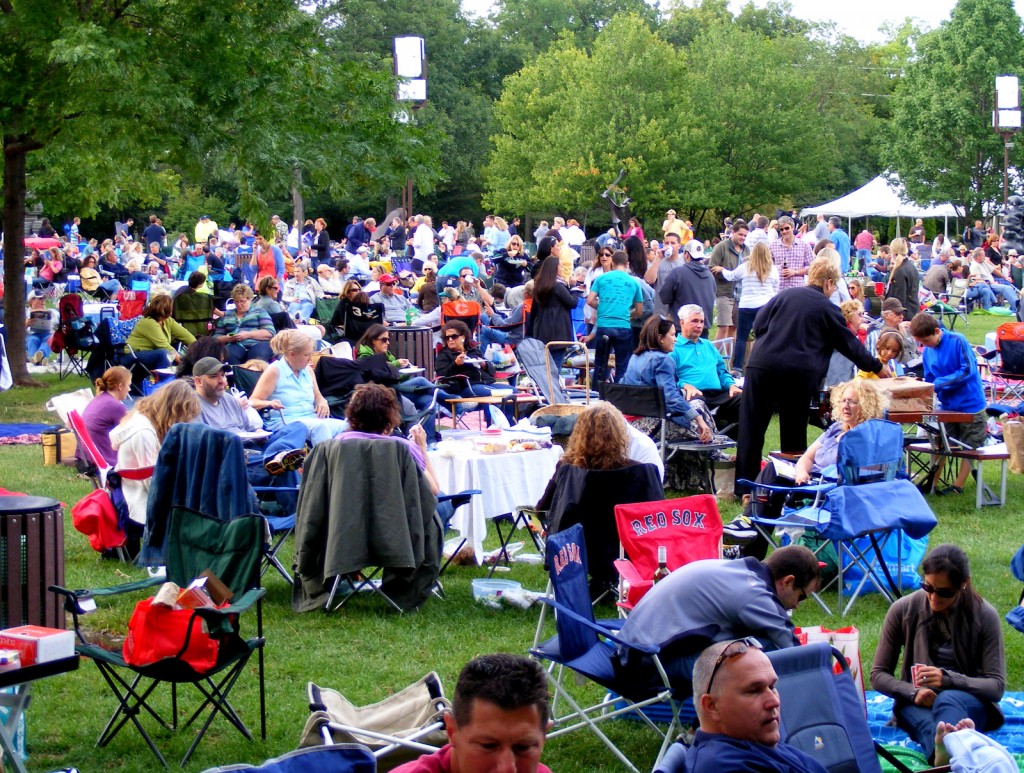 My niece and her husband came a bit later.  And the crowd kept growing … 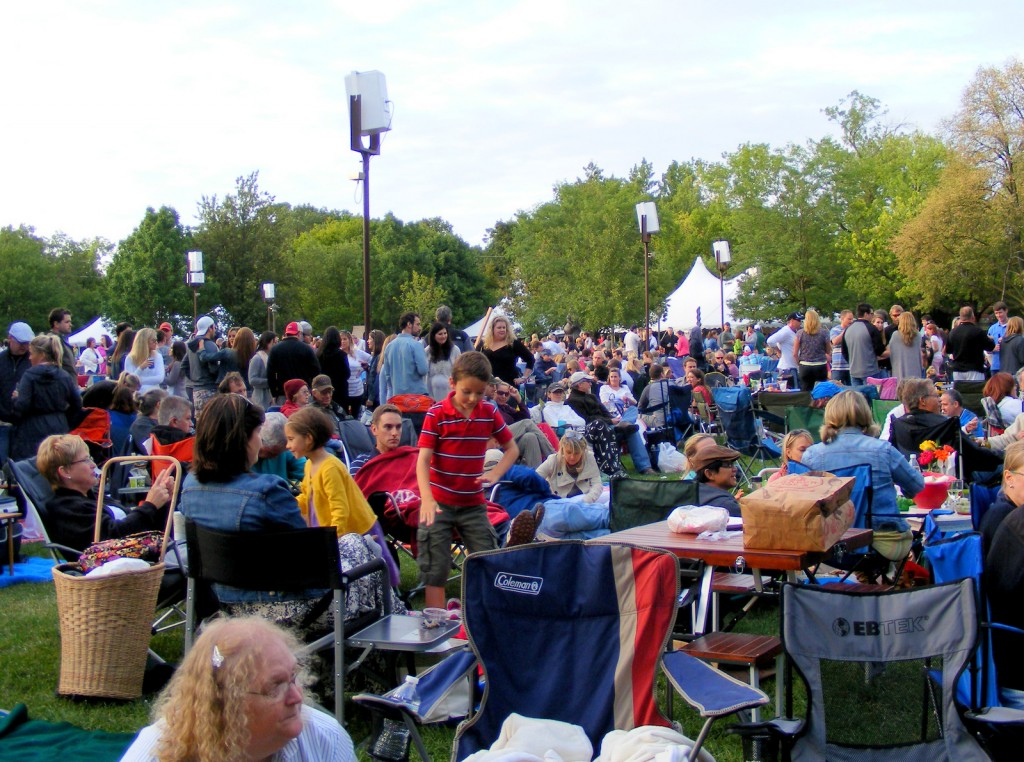 and growing. Here’s the stage pavilion from where we were sitting. 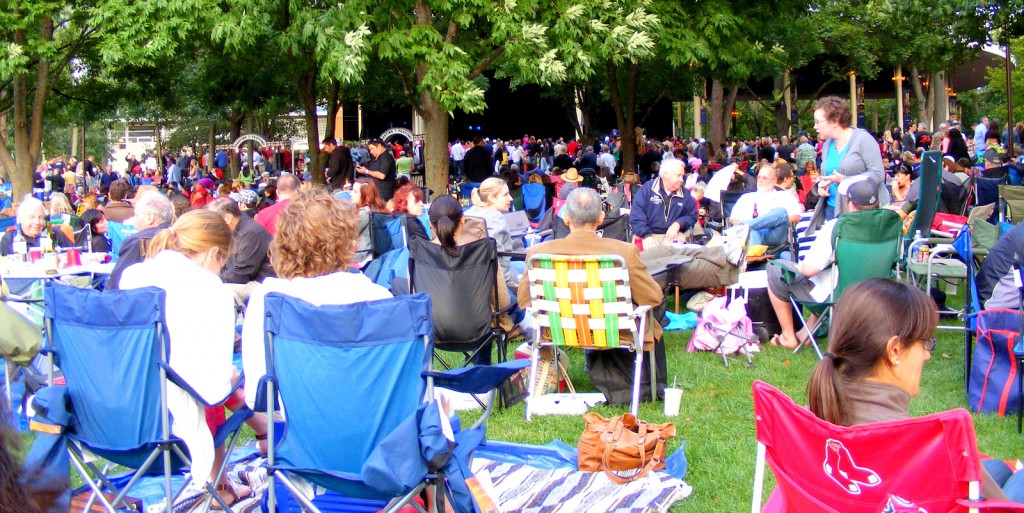 I wandered over there twice, once for each singer and took photos by holding my camera high above the packed line of people who were looking over the heads of the seated people who paid extra so they didn’t have to sit in the mayhem on the lawn and could actually see the performers.

Here’s Huey Lewis and the Nudes. They did most of their familiar hits (except “It’s Hip to Be Square”) and sounded good and alive. 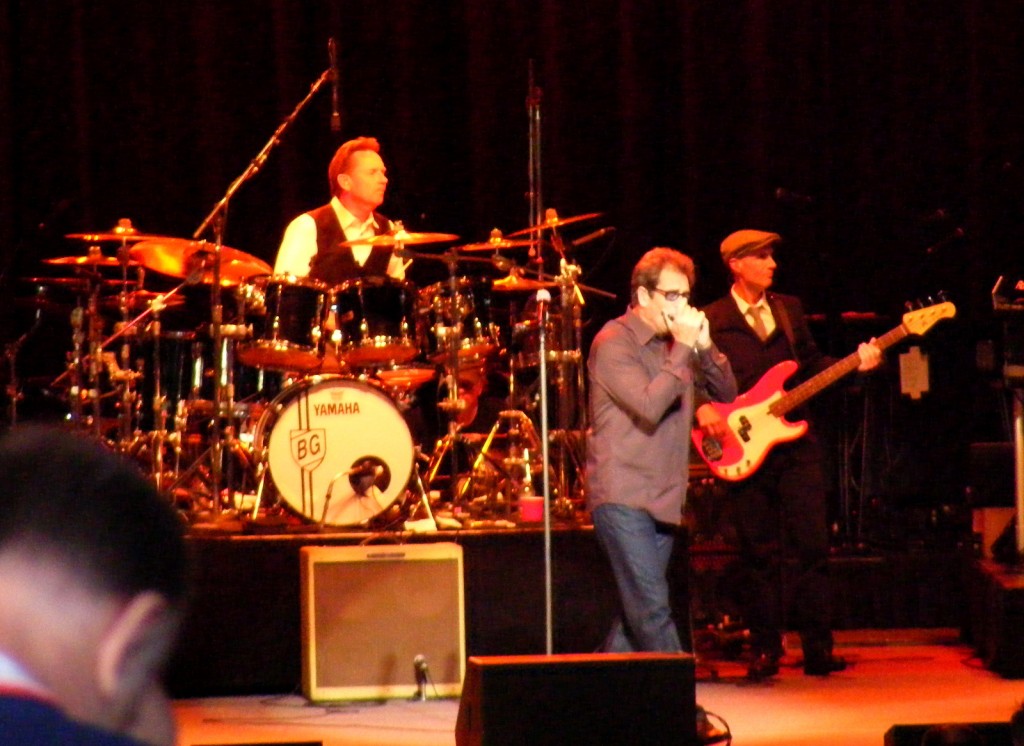 And Joe Cocker (who isn’t Phil Collins). While I was waiting for him to come on stage, I was standing in front of two guys who spent 20 minutes discussing how old Cocker was. They were attempting to reach a conclusion based, not on facts or history, but on how old a performer would have to be before people would no longer go to see him. It was fascinating, let me tell you. I kept looking around at them to see if they were drooling. They never reached an actually decision. Anyway, here’s Joe. 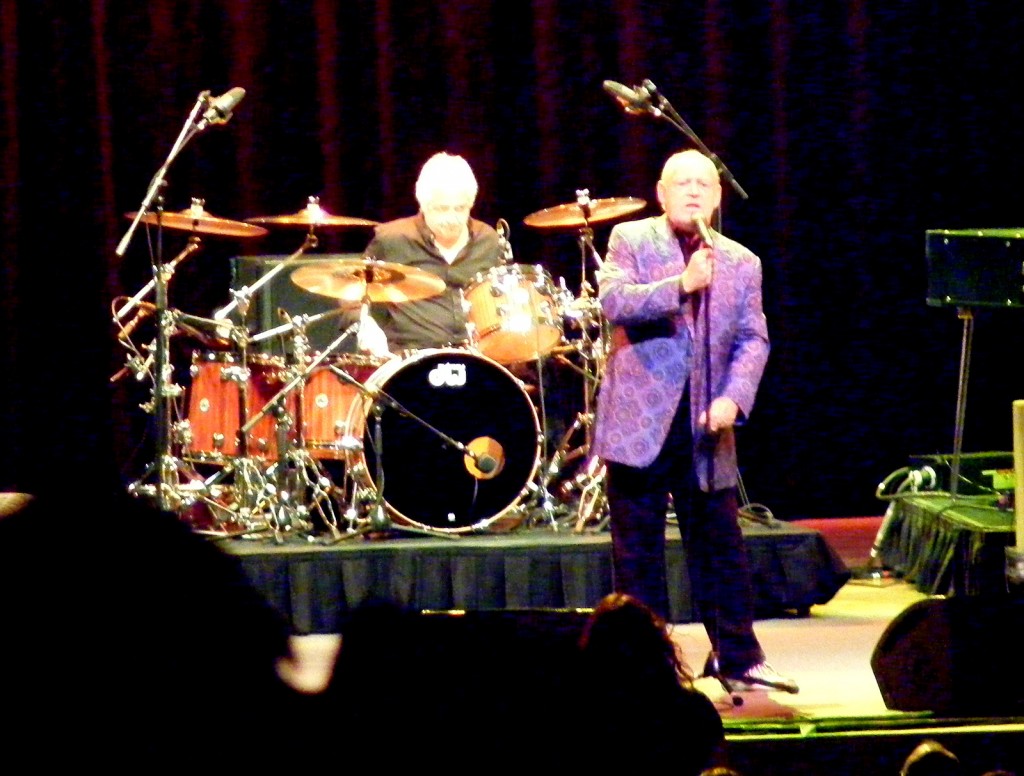 Joe pretty much talked through most of his songs, several of which were Beatles covers. He fell asleep several times while singing “You Are So Beautiful To Me.” Either that or he couldn’t remember which pocket the cheat sheet was in. Or the woman he was singing to was slow of hearing. About three songs from the end of his set, everyone got up and left.

We walked back to where our car was parked, which was about twice the distance that walking to the back of the shuttle bus would have been. We had no trouble getting out of the area and were home by 11:04. It was a lot of fun. I wouldn’t want to do it every Friday, but I’d do it again some time — as long as the performers weren’t any older than 70 because I would never go see anybody that old sing.

This entry was posted in Music. Bookmark the permalink.