When a friend who also happens to be a professional photographer asked if I would be interested in having him take some photos of the chair, I not only said yes, I gave him total freedom to pick the location.

He chose Woodstock, Illinois, where the movie Groundhog Day was filmed. We went there on a damp January Monday morning and recreated several scenes from the movie — to the amusement of several homeless men who sat on the bench in the square and stared at us wherever we went.

For this shot, I sat in the middle of the road for several minutes while cars were driving by. A mailman working his rounds cautioned us that “the drivers are crazy.”

While we were taking this photo in front of the theater, a construction worker who was working on the theater expansion paused to ask why I was taking a picture of myself. He had mistaken a flash on a tripod for a camera. James came across the street and asked the guy if he’d like to get his photo taken in the chair. The guy reacted strongly, walking swiftly away and saying, “I’m good. I don’t like photographs.” I figured he was either running from the law or from an ex-wife looking for alimony.

The famous spot where Bill Murray steps in the puddle. The cafe is now a taco place, and the curb is about six feet further into the street, which explains why I’m pointing at a bush.

In the center of the square. There were at least seven other people wandering around downtown taking photos, but none of them had a chair.

We faked this one. I sat on the top step of the stairs leading into the gazebo. Then the photographer took a shot of the Woodstock Opera House tower and patched me in. While he was shooting the tower, I was guarding the equipment. A disheveled gentleman with no teeth walked up and said, “I know what you’re doing. You’re taking pictures of scenes from that movie.” I admitted that we were. He said, “I caddied for Howard Ramis and Bill Murray. Bill kept doing that voice from Caddyshack and I was laughing so hard I could hardly hold the clubs. He cracks me up. He’s a good actor.” He then wished us a good day and ambled off. 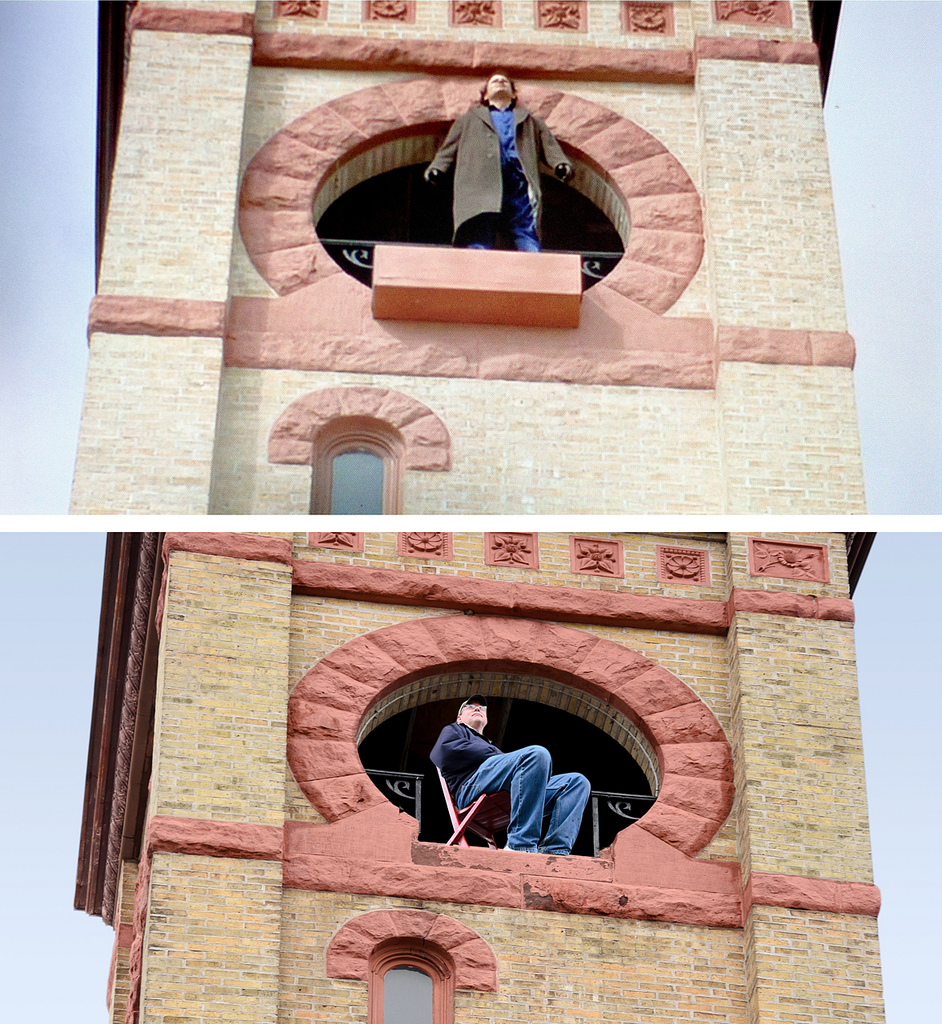 Two shots by the bed and breakfast that was Bill Murray’s lodging in the movie. 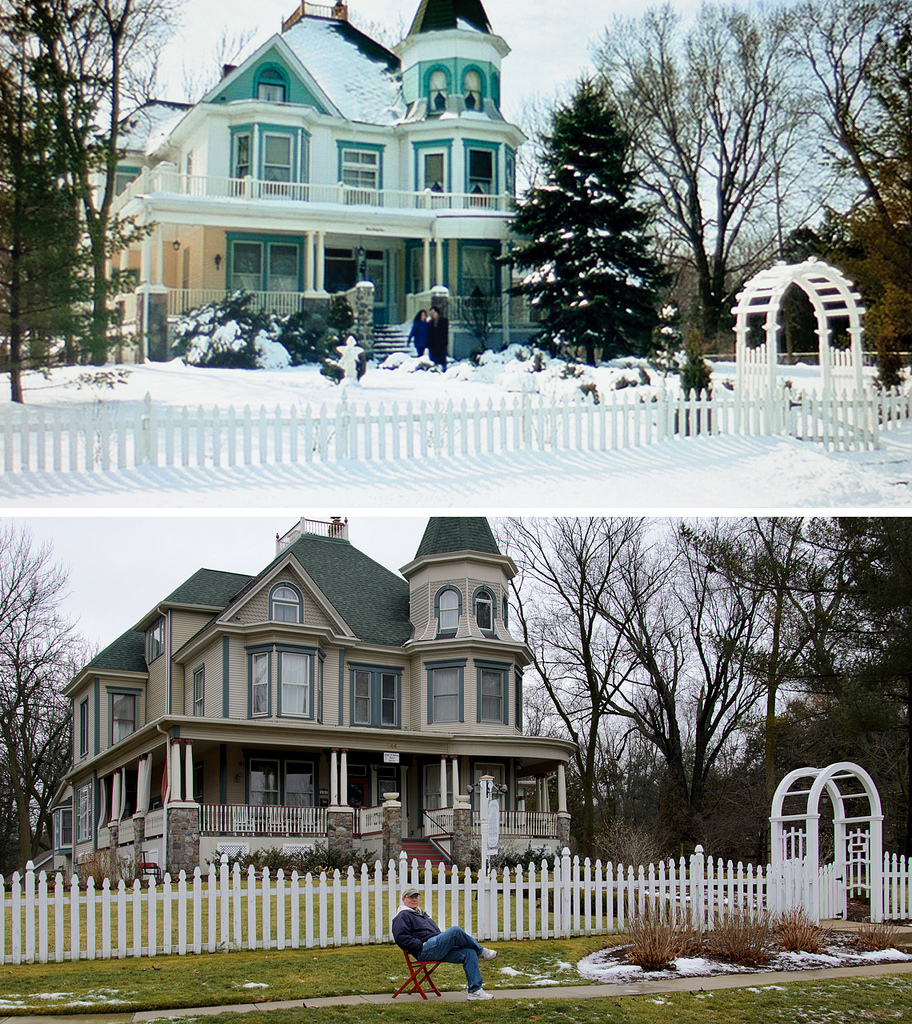 And here’s one I took on Ned’s Corner, where Ned Ryerson first recognizes Phil Conners EVERY morning. 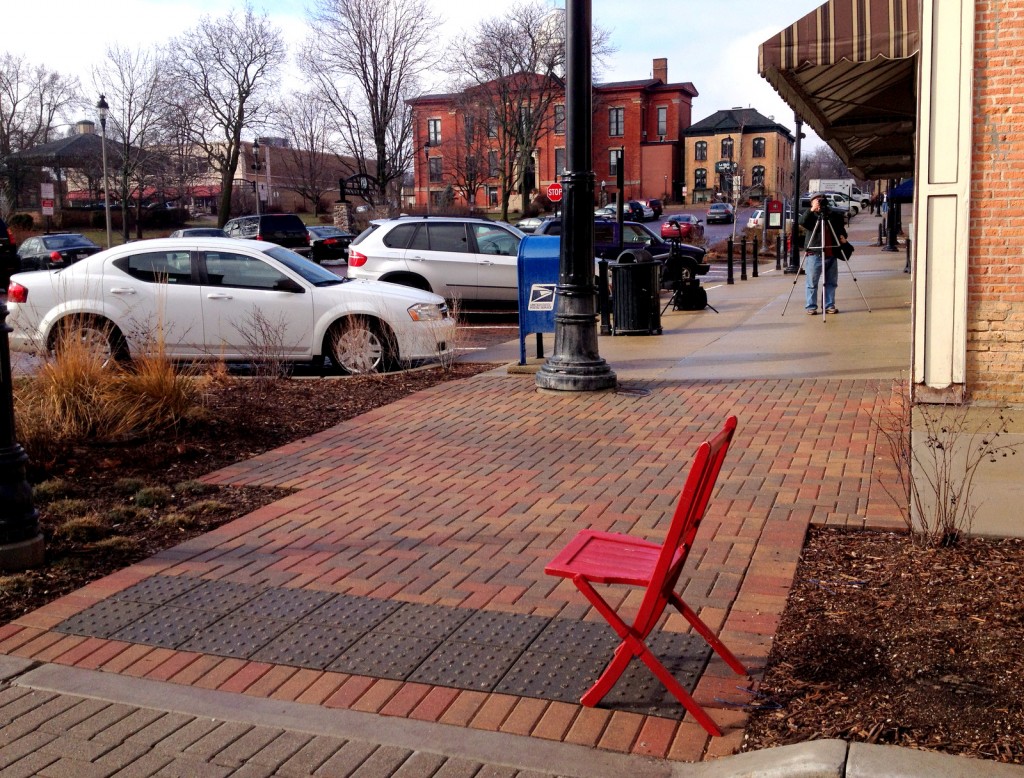 This entry was posted in Movies, Red Chair. Bookmark the permalink.